Today we woke up at 7h00 and as we were not going to eat, shower or use the toilet, we were ready to leave 20 minutes later. We were just glad that the sand-storm had subsided as we headed South towards the border. There was no traffic on the road at all, (see photo below,) yet when we got to the border there was a very long line of old Russian Jeeps (I guess there was over a 100 Jeeps,) waiting to cross over to China. We acted stupid and tried our luck and it worked and we were let in from the side when one of the Jeeps engine did not start and held up the line. We later discovered these Jeeps return loaded and overflowing with items 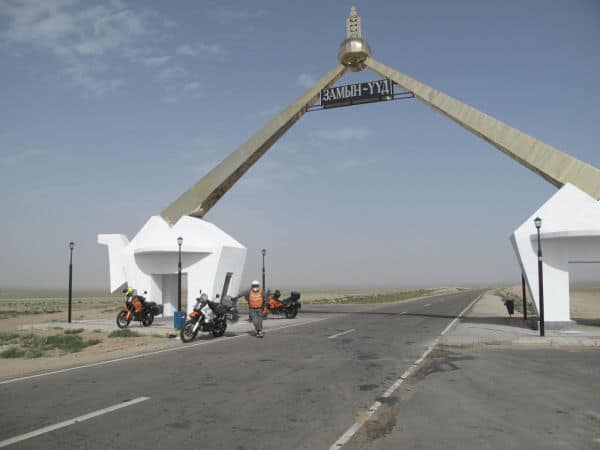 bought in China for trading in Mongolia.

Even though we jumped the line it took us three hours just to exit Mongolia, it is chaos with people pushing and shoving to get to the window for a stamp here and a piece of paper there, and somehow due to not understanding the language we missed the one window and eventually the customs officer phoned a friend who told us over the cell phone what the problem was and that we had to go back to the window we missed and start again. The fact that Gregg is driving the Toyota which is registered on Pies name, and Pie is riding a KTM registered on TEX’s name did not help and added to the confusion, but then we stood our ground and formed a scrum around our man with the document being attended to at the window and only then did things start moving. There is no sense of personal space and often people would slip into the gap between me and the person in front of me.

We met Tony, our Fixer in China, who will be our guide for the trip and the 1st thing he said was that we had to remove the Reindeer Horns from old Brutus’s front grill as we would not be allowed to enter China with it on the front of the Toyota as it is illegal to import animal products. So the horns were wrapped inside a bike cover by Peens and smuggled into the taxi which took us to the hotel as our vehicles would have to stay at Customs until they have been cleared, it takes about 24 hours and it all has to do with the fees we have to pay for import duty, which we will get back a month or so after the vehicles has left the country. As I am writing this blog now (which is the following day) we have just heard that the $40 000-00 that was paid yesterday would not be enough and another $20 000-00 deposit was needed, and this has to be done via banks and guarantees need to be issued, so I doubt we will be able to make it to our planned destination tonight.

Here we are with  Tony checking into our hotel in Erenhot and a photo of what our hotel looks like. 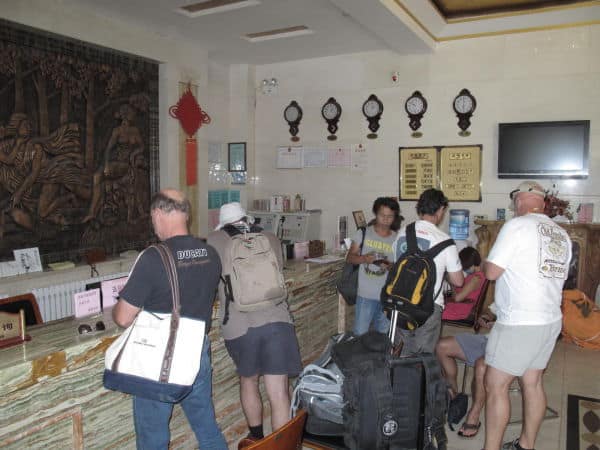 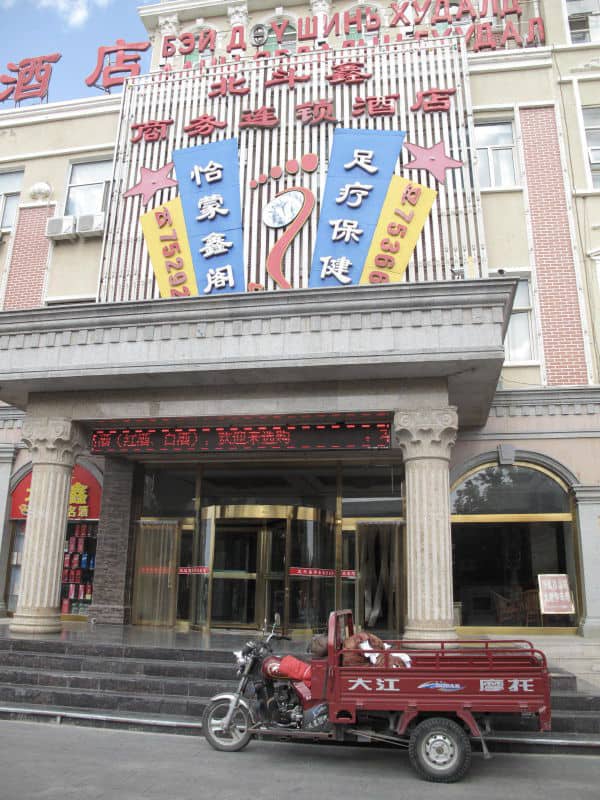 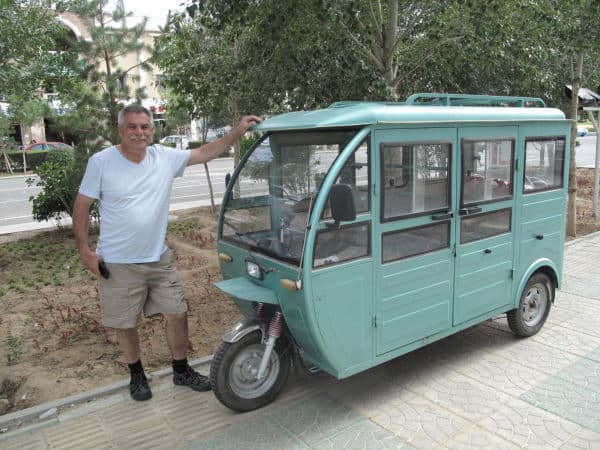 We had not eaten anything the entire day, and apart from snacking on Rocky’s Tuck-Shop which is stocked to the brim with nuts and biltong (another item we are hiding from the customs guys,) so we opted for an early dinner at 18h00 and upstairs from a Take Away Restaurant they had two private rooms with the mandatory “Lazy Susan” in the center of the table for passing-on the food by spinning the glass top of the Lazy Susan. The food was very good and typical Chinese Food that Tony ordered for us as there were no English Menu’s and the waitress could not even understand our desperate hand signals. I was very impressed with Tex, he might not have much to show after spending 18 months in Shanghai (from a business point of view) but he could order some dishes and know how to say”white wine” “red wine” and he knows which food dishes should be avoided.

Tomorrow we hope to get onto the road. We now all have Chines driving licenses and our vehicles have Chinese License plates, (this was all done by Tony and we did not have to physically re-do any driving tests.) Our vehicles have also been passed as roadworthy based on photos we had to submit before we arrived here. Tex is leaving the group this afternoon as he has finally managed to get a meeting with someone in the government high enough up the ladder that might be able to help him as there is an Environmental Impact Study that had to be done that has been holding up their plans to open a factory in China, he will fly back to join our group in two days from now. So I believe we might turn a few police officers heads with his bike being hitched to the back of Brutes, time will tell.