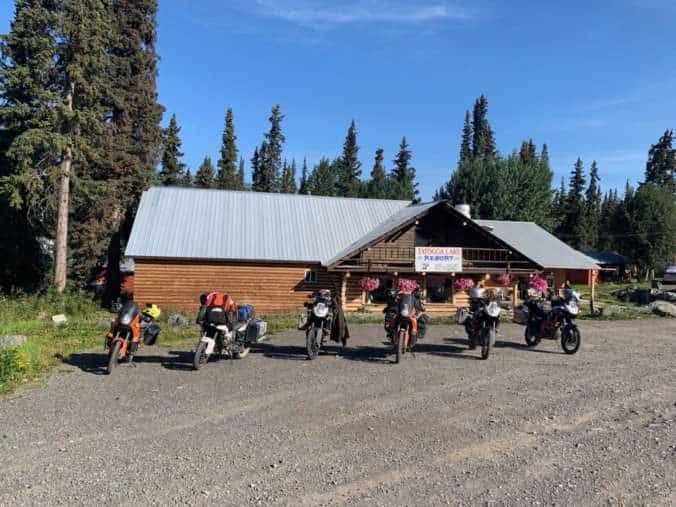 This morning the Kick-stands went up at exactly 6h45, like one man, poetry in motion, any Drill Sargent would have been proud of our synchronised precision, then we rode to the Gas Station, in single-file, 3 bikes parked on the one side in front of the pump, the other 3 on the opposite side, from above we looked like the spokes of a wheel, we were organised, precise, on time and moving like a well waxed bike chain, and then we saw the Gas Station was closed and only opening at 8h00 as it was a Long Weekend in Canada and it was a Sunday, there were no Credit Card filling facilities like at all the other Gas Stations where you can fill 24hrs per day just using a card. We looked like amateurs, a Rookie Mistake, our faces fell, our lips dropped, we went back to the hotel and had some free coffee from our lobby to go with the Humble-Pie we were eating for Breakfast.

When Breakfas came 100km into the ride it was at a little resort that had a restaurant, the old man and his two staff (Irish Ladies) managed to serve up the “Two Egg Breakfast” with bacon, hashbrown and pancakes with syrup before we had time to look at all the dead-stuffed animals against the wall. But I suppose these animals did not die in vain as there were little Notices with interesting facts about them in the time when they were still alive. I was also surprised at just how big a Moose is:

Look at the length of this trailer, it connects onto the vehicle with what to locals call “a 5th wheel” which is on the back of the bakkie.

We started the ride at 9C but there were no clouds and soon it ticked up to 20 Degrees, the ideal temperature to ride in, and as the day went on, it got hotter, going up to 28 Degrees. So when Tex started swinging his arms madly everytime we passed him and he passed us we eventually got the message that he wants us to stop for a swim.

I got a shock when one of these ran next to the little road.

Milsy took this photo, not the best photographer, but look at all the flowers.

On the road today the only traffic was other bikers and RV’s each with an old couple and their dog, they stop often and walk the dog. This one was standing on the dashboard while its owners went to use the toilet.

In search for a place to swim, (we stopped at 4 places for the guys to swim, but at the 1st there was too much mud, at the 2nd the water was flowing too fast, then the next there were too many froggs, thousands of little frogs were jumping in the grass, on route from a small little lake to the main big lake. The grass looked alive with all the frogs moving around.

Kaptain Rog saw his first bear today, along the way there were also a mother bear with 3 cubs crossing the road.

I got worried about The Dog today as he started acting just like a real dog, he would wave us by every time we found him, standing in the road looking at the Road-Kill, this happened several times, he has developed an interest in Road-Kill and due to this new weird fascination he was the last to arrive at our overnight stop.

It was hot and the guys were feeling the heat.

Those of you that read my Blog only to look at the photos can now stop, no more photos, just a note about the day’s road:

Every now and then one gets a day that ‘Makes Sense”, it puts riding in perspective and makes up for days of riding in the rain and cold. These days are like an Epiphany. Everything just clicks, the weather, the road, the music in your ears and the state of mind, as well as your spiritual state of mind, it all just CLICKS, and you have a day that will be edged in your mind for the rest of your life.

For example, there was a day when we were riding through the jungle in Laos, in the rain, (between China and Thailand, those that did not follow the blog should go back and read that post.) I will never forget that ride. Today was the same, what a ride, what a little road, what a day’s riding today was. It was a Religious experience, how Blessed I am to be able to ride through this unbelievably beautiful part of creation, STUNNING !!! Lakes, rivers, beaver-ponds, green grass, wildflowers, pine-trees and 50 shades of other tree’s green leaves, mountains and little bridges, hardly other vehicles and a little place to stop every 100km.