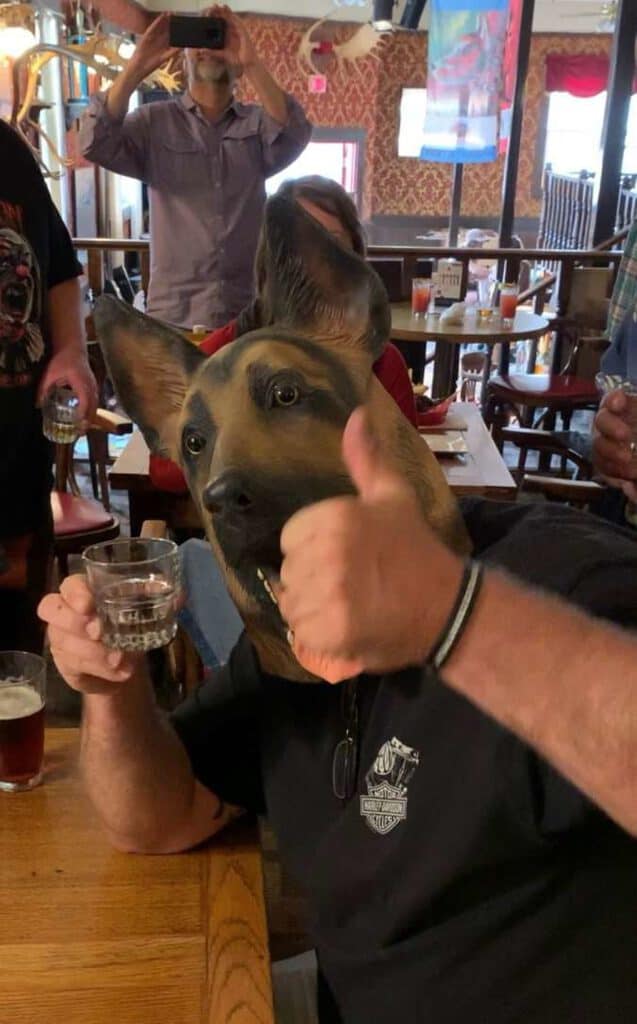 Last night was not fun, when the guys came back we drank a few beers and planned how to avoid a similar problem in future. We depended on people in the group and that is fine when you ride in a country or area where there is cell phone reception, or towns, (that would help) and help is around the corner, but when you are 300km away from any help you must be self-sufficient for the most common problems, like flat tyres, flat battery etc.

By the time I left the guys to go and prepare for their return and also do the Blog, (which many of the wives rely on for news, ) we had tried several ways to flambé the tyre to pop into the rim, the brandy and bear-spray did not do the job and left the tyre only slightly crisp and not in the correct popped position. But then the boys met the Gordon Ramsy of Cooking tyres, a bunch of Dirt-bike riders who used a product called Quick-Start (used for starting engines when they are cold, sprayed into the carburettor.) They filled the tyre with the highly flammable spray, then ignited it, a small explosion followed inside the tyre and on the video Peens took you can hear the tyre pop into position, but they sprayed too much, resulting in Rockies front tyre turning to Crackling at some places. The hole in the tyre was patched from inside with a patch, another item we will carry in future:

Poor Rodger, he was still getting his bearings and the next minute he is having the day from hell. When I asked him at midnight how his day was, he said, “What an Awesome day,” he loved all the drama and the excitement of riding 200km in the twilight on a tyre that may or may not see him dance in the emergency lane, again. But I suppose that if you fly in and out of a war-zone on a daily basis, this long day in the saddle with Jetlag was nothing. Rodger works for the United Nations and is based in Djibouti, (a small country near Somalia on the horn of Africa (I guess that confused some people,) and he flies into Yemen on a daily bases (he has been for the past 4 years since the war escalated.) While he had to wait at the bike when the front tyre was removed, he kept himself busy with push-ups, he also had to fend off a RV with women that wanted to abduct him. For fun he also does Endurance Marathon Races in the desert, 5 days running in the desert with all your food and water on your back, lekker man, lekker.

Anyway, yesterday was a sad day to say goodbye to Rocky, now known as “The Keeper of the Fish” he went home with the fish which he will distribute between the wives, (who says we don’t take gifts home to our wives?) He gets home, after 3 flights and 30 hours of travelling, (I can smell a problem here.) He has business commitments and could not finish this Leg. In fact, we were all going to fly back yesterday and a new group of friends and family were going to fly-in and ride the bikes back to Seattle for us, but all of them cancelled, only Rodger came to help. It is particularly sad in my case as my lovely wife is turning 50 on the 4th of August and now I will not be there as I will have to ride Dad-Ass back myself, (but my wife is an amazing woman and understands the chain of events which lead to this unfortunate situation. How amazing to have a wife that lets me chase my dreams!!!! I love her to bits.)

Yesterday the KTM Split Group “Los Maatjies” went big in Dawson City, a very special mining town from the Gold Rush, and Dog took on the challenge to drink a Shot with a Frostbite Toe in it, I suspect it is just the toe of a cadaver but here is more info and photos:

This morning we all rushed out of the Chalet and saw that the tyre was still inflated, so, what do we do, do we take the 300km Adventures Route to Dawson City on the small little road that is closed over the winter, and access the town by small ferry? The ( I know it is spelt wrong, but my Spell-check won’t give me the correct spelling as it wants me to upgrade and pay for a better version) picture showed 12mm rain coming in, and Rain + Gravel = MUD

If we took this option, we risked the patch inside the tyre shift from the bad road resulting in another tyre-drama. OR, do we take the better road to White Horse where we know we could buy a new tyre and back-up tube. We felt sorry for Rodger and decided to take the safe option and miss out on the last adventure ride, (called “The top of the World Highway”) of this trip and not see Dawson City. But Peens then decided to also drop his friends (he usually has to pay to do things that endangers his life, and this thrill was free, and challanging and dangerous, right up his Appatite For Ris) and he left us to nurse the sick bike the 646km to White Horse, and he rode off in the rain, splitting the group even further, trying to keep this lot together is like herding cats!!!!!

We started looking for a tube in Tok and eventually, I found one at the local Chain Saw shop. The guy there told me about a lady who has a Camping Site on her farm for bikers and she might have an old tyre, so we phoned her and she told us to go and look behind her shed, plus she gave us directions to the campsite. We found an old used 21-inch tyre, plus we found a loaded 44 Magnum lying around, plus some Dagga. (We considered smoking some of Cannabis and fly to White Horse but eventually rode there.)

We battled to find the “shed with the green roof” as there were several sheds, all with green roofs. We got to the ladies house, there was a husky dog inside, filled with rage, barking it’s head-off and almost breaking the window to get out and eat us.

The road became nicer and nicer as we rode, Rodger was in awe every time we stopped as he had not seen all the lakes and forests before. We crossed into Canada and the scenery got even better.

And of course there was Pappagaai’s, a few actually. This guy in the Mozzi net called us from the back to the front, but only to be able to shout at us for overtaking an RV in the roadworks area leading up to the Stop-And-Go.

The road was nice and quiet with only a few caravans and RV’s to pass.

This couple has a Fold-up-caravan behind their bike, the lid of this trailer becomes the roof of the caravan and then there are canvas walls that comes up with the lid:

The KTM Split Group felt so guilty for leaving us, they rode around looking for other people to help and give them our spares we needed last night, they found this person which they then helped with his tyre problem.

The others had to ride through a little village called Chicken before getting to Dawson City, the story goes that the gold miners wanted to choose a fancy name for their town, Cherkins, but the night when they all had to go and decide and vote on the name they had to meet in the only place big enough, with of course was the local Saloon (Bar\pub.) By the time they had decided on this fancy name a lot of liqour had been drunk and the guy who had to write the name into the Government application to become a town spelled it Chicken.

We got in late as it was a long day, we left late looking for tyre and tube, lost an hour when we crossed over a Time-Zone, had to cross the border and Roger could not lean the bike into right-hand-corners (preserving the patched sidewall,) and when we did arrive all the hotels we asked at were fully booked, but eventually we found “The Flea No Wi-Fi Inn” so once again I am typing the Blog and will find a Mac Donald’s to send it from tomorrow. We need to go and buy a new tyre when the bike-shop opens and then have it fitted. We have a short day as we plan to meet-up with the others today, maybe ride up the gravel road they are coming down on and then ride together to the next town where we are sleeping tonight.