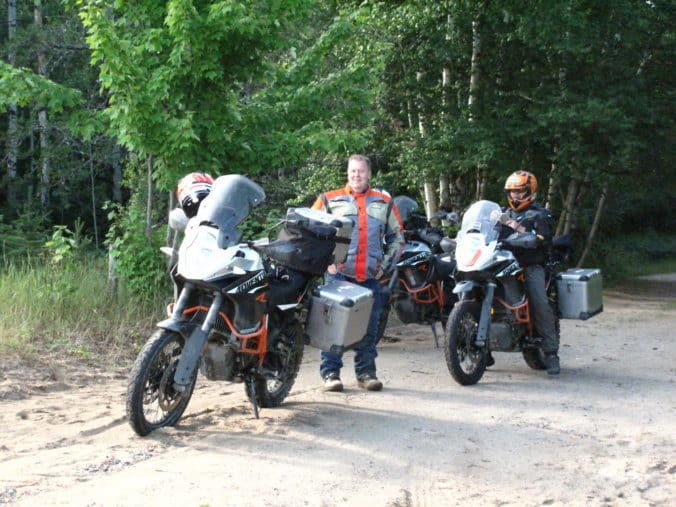 Prepare Yourself, this is going to be a loooooong Blog as I got my computer to connect onto Wi-Fi again after getting info from two computer guys as the one would say do “this and that” but not explain to me how to get to the page where “this and that” is, so when I ask him for more info on an idiots level he would not be available to answer at that moment when I have wi-fi on my phone, so then I ask the other guy who answers and by the time the “this and that” did not work he would be un available and I had to get the next step to try from the other chap, and so it went for three days.  My final plan of buying a Data Card was shattered yesterday at Wallmart when the man said they dont do cards like that at normal stores and I will have to go to a special store 2 hours away for a lap-top data card, so I got a 2nd opinion at a cell-phone shop and they told me the same, and when I walked into a Computer shop for a 3rd and final opinion it was a bottlestore, I asked the man why the sign outside said Computer shop and he said that the bottlesoter is expanding and re-moddeling the old computer shop, so I took that as a sign.

So here are some photos of the past few days that I could not publish as it was on my phone:

Peens’s bike getting a jump-start at the border from a lady who was more organised than us !!! 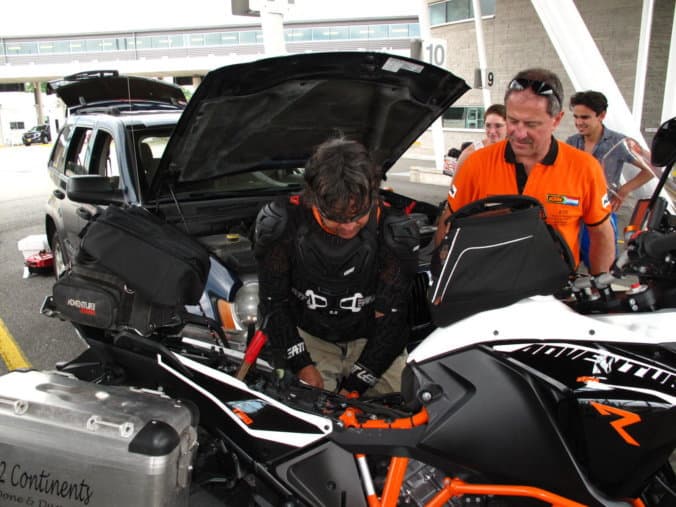 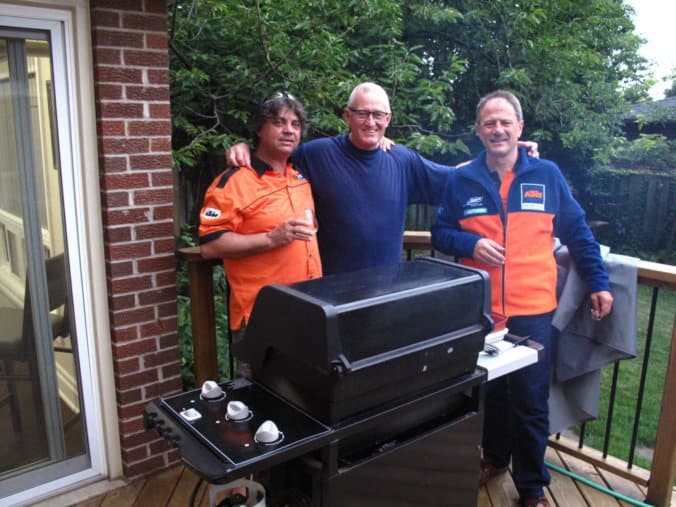 Our dinner at Bruce and Sarah in Toronto 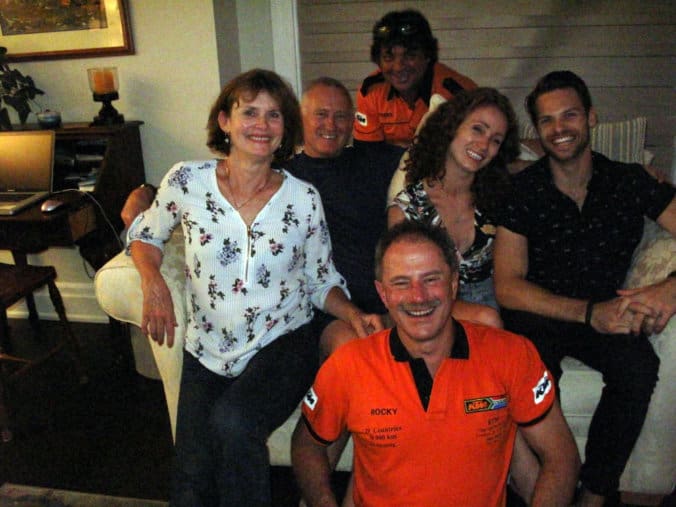 The rest of our group met a lot of friends and are having a ball. 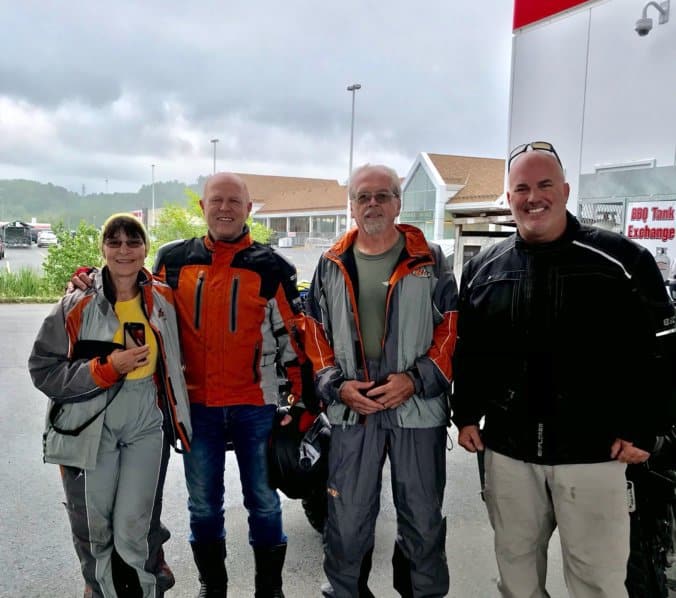 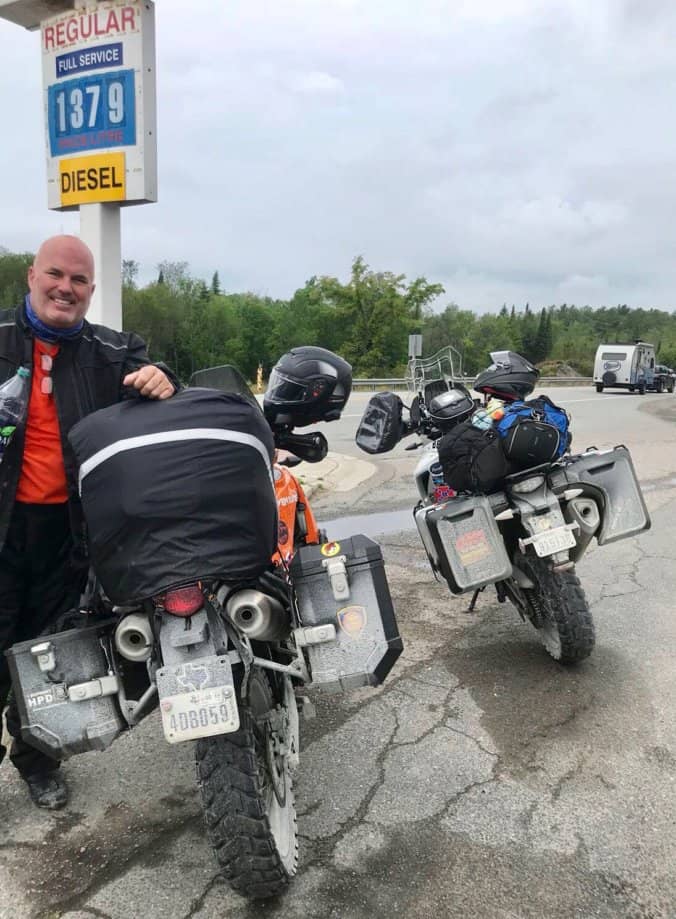 Back to Last Night:

Our Lock View Motel was a Biker hang-out and the price was lowwww cheap and nasty with plenty of bikers riding up to see the Locks and boats passing through. 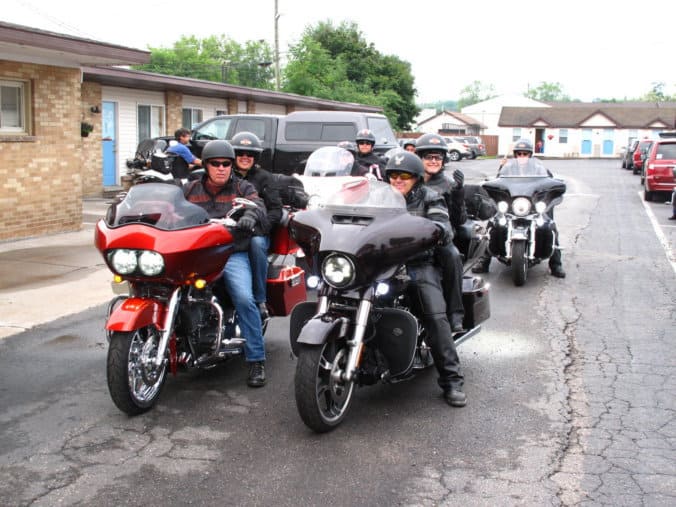 But  the best thing about this motel was that in the bathroom it had a heater which Peens set to Maximum and then we closed the door hoping to dry all our still wet riding geat and clothes, but most important items to dry was our riding boots wich reminds you gently the whole day that all is not well down there and you get the “slippy feely” the entire day when you should walk, but oh my golly, when you take off the boots, thats when “it” hits you. So we left it all to dry during the night. Going to the toilet through the night was like going into a  sauna, but this morning I smelt something was wrong and when I had a look the shower curtains were looking stringy like a Swiss Cheese Fondau.

There is a visitors Centre with Viewing Pavilion to view the ships going through the lock, but it only opens at 9H00, so I had to take some photos through the fence. 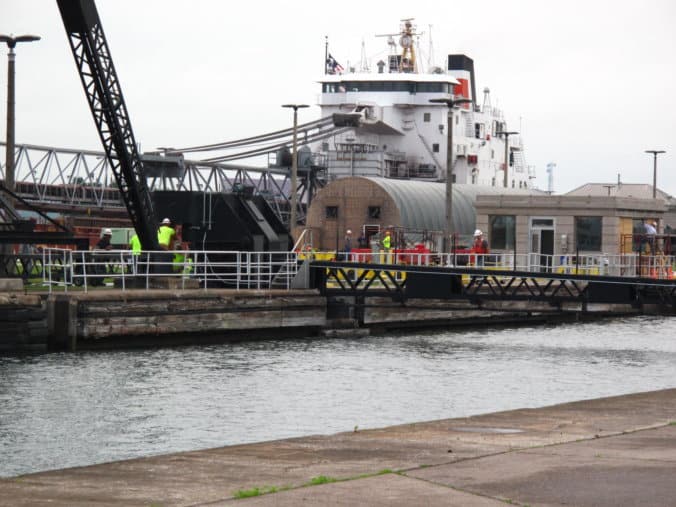 These Locks which have to lift or drop the ships with 7m to the lake they are going to’s water level are very busy as a lot of cargo ships move their loads through these lakes. For the Technical guys wanting facts and more info, here is a photo I took using a pamphlet from the visitors centre, this is how it works: 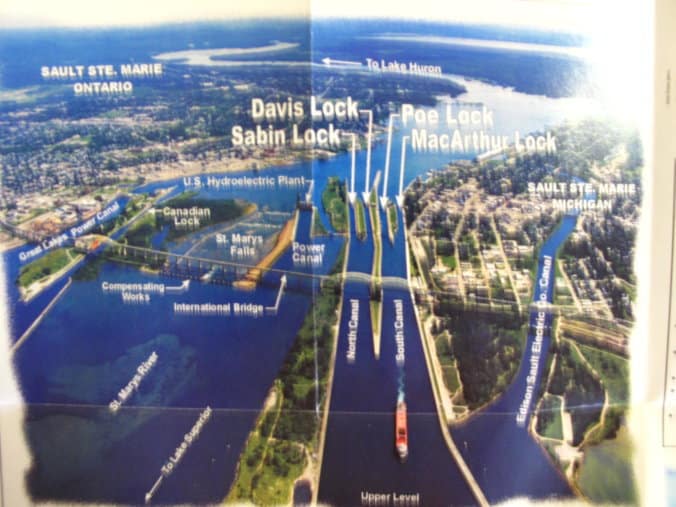 We had a chat to the owner of the Motel and he suggested some adventure roads for today, so we set off looking for some dirt road he suggested, but it turend out to be a little dissapointing. Yesterday we were riding along the North Shore of Lake Huron, today we hugged the South Shore of Lake Superior, riding past all the Homes on the Lake. The Books told us this was a scenic ride, and on the Map and GPS id did look like it might be, but in fact one rides in a tunel of forest trees 100m away from the lakes-shore and only occasionaly see the lake through the trees. The water was warm and crystal clear. 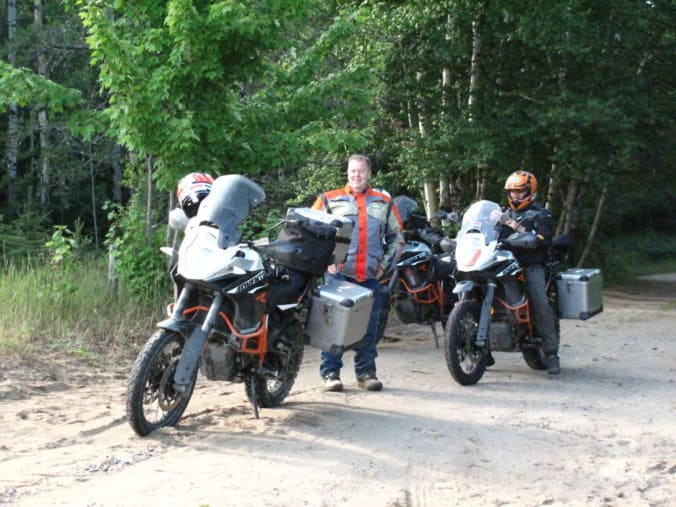 The morning’s riding was done in the state of Michigan and Suzzy (my GPS) were on-form, first sending us along little forest roads through the Hiawatha Forests and then later when the sun broke through she sent us on small country lanes. Peens was not too happy when our left-over Fish and Chips from lunch was left for the seagulls, on his bike: 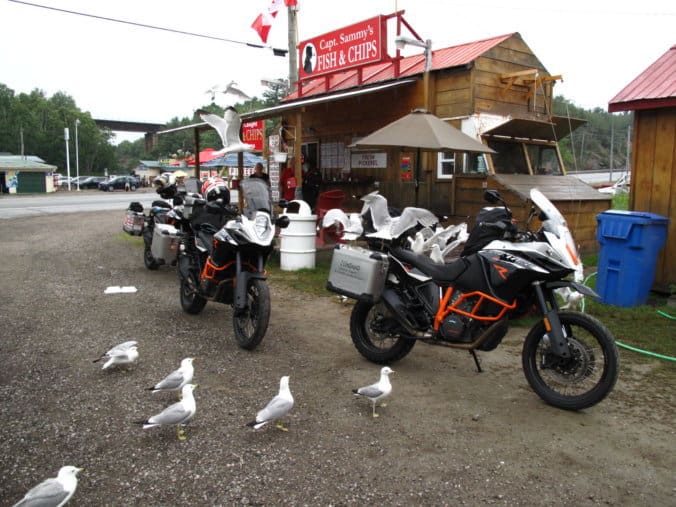 News from the other two groups are :

Pie has found another Studebaker he wants to buy: 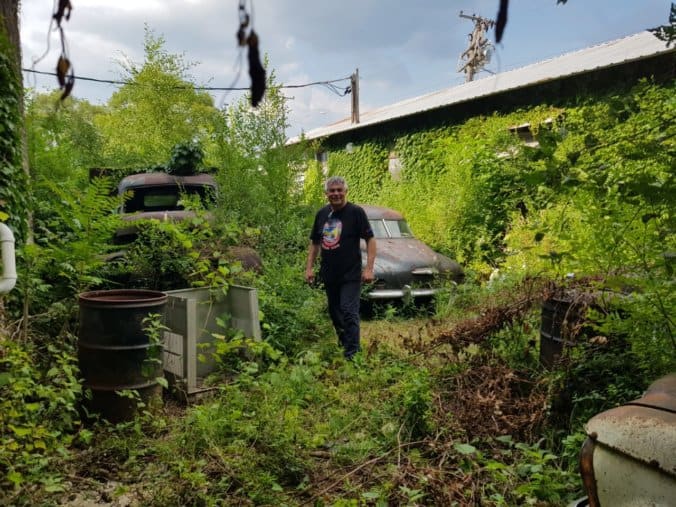 The two Texans has had some bad luck, or let me re-phrase, Dog has had some bad luck, first he rode-off with his I-Phone on the backseat, which then fell off at 80km per hour, he had to stop a state-trooper who had to use his Find My Phone App to help Dog find his phone in the bushes. A very Helpfull State Trooper indeed, not like the State Trooper we had on the road today, he saw us “speeding” past him, but he was not ready for us (the speed limit is  only 90km per hour so going just 30% faster than that looks very obvious,) so it was a repeat of a typical old movie called  “Smokey and the Bandid” from when I was a kid, where Peens first made a very unexpected left turn into a picnick spot next to the lake, so unexpected the remaining two of us rode past before we ducked into the exit of the picnick spot, and then old Smokey arrived but he was not sure who the culprit was that he was looking for (Peens) as our motorbikes and riding gear look the same, so he was confused and we had mixed ourselves up by the tine he arrived we were standing at the lakes edge with our helmets off, (the only way he could have told us apart) so he just drove off, going down the road and hiding again from us, and I am sure he would have had his Laser Speed Gun ready this time, but now we suspected this move and we stayed under the speed limit as we passed him behind the trees, but we did wave at him.

But Dog also knocked his bike over and his gear-lever and clutch lever was bent badly, and this young man Adam was the hero who helped and bent everything straight again. 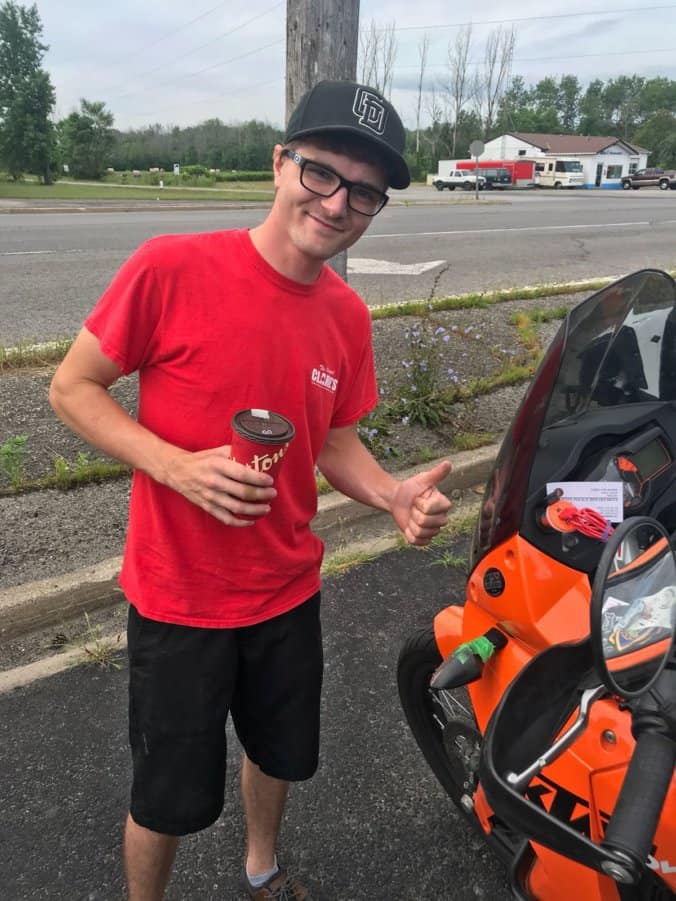 Pie and Milsy has gone very quiet as they dont have such a scenic route down between Detroit and Chicargo on Tour de Studebaker, but it seems the Texans are having a blast, also getting the bikes dirty on some gravel. 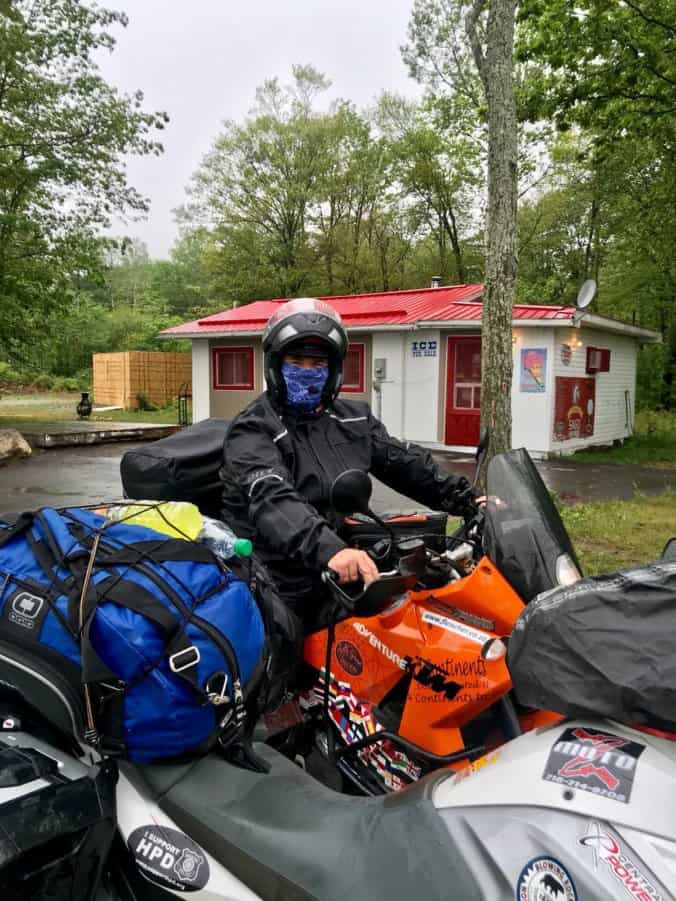 Tomorrow we have a very special days of riding planned, we are going to loop around the little pininsula from Green Bay to Sturgeon Bay, White Fish Dunes, Gills Rock, Egg Harbour and back towards Green Bay as we head for Oshkosh early on Thursday morning where we will all re-group for the biggest Air-show in the world where we will stay for three days. It is a show that is on every pilots Bucket List, apart from hangers and hangers full of everything to do with the aviation industry, air shows non-stop, halls and halls full of every gadget, instrument and planes, old and new, there are also a very festive mood and food and beer tents with live entertainment. More about that over the weekend.