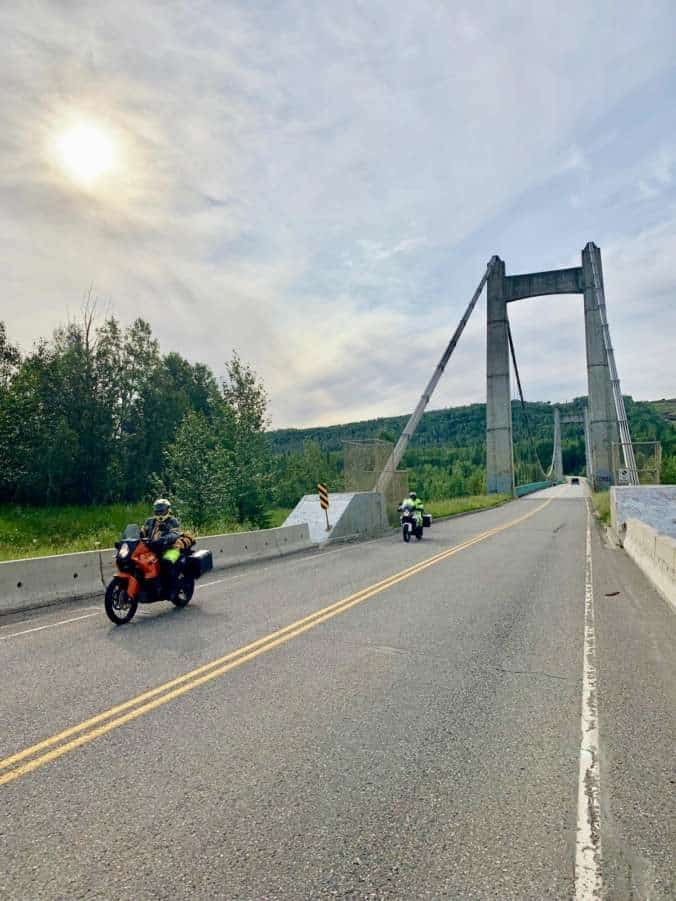 Correction, I see I am getting the days and the dates wrong, that is because I look on my watch what day and date it is, but that part of my watch is still on RSA time, so if I do the Blog late on my side, it is already past midnight in RSA, so now that I know this I should get this right going forward.

We did not have a good evening last night. After we ate our dinner of Crisps and Biltong, washed down with some Whisky, sat on our Porch and looked at the traffic passing through the road-intersection:

And then we decided to go to bed early, but there were two problems, firstly our cabin was on a roads intersection, and the road was noisy, especially when they dropped off a crane for the construction of the bridge just down the road:

Another problem was that the sun only set at around 22h00, and our luxury cabin’s paper curtains did not work as designed, so it was still light when we got into bed at 9 pm. But it was raining outside and not all of us were prepared to Draw-Straws to see who sleeps in the bed and who sleeps on the floor, (as the thought of losing, and then having to go out in the rain to get the camping-gear off the bike was just too much,) so another plan was made:

This morning Pie and Milsy were arguing just like a little married couple, Pie stole the blanket and did not stay on his half of the bed.

Our Cabin was the only cabin, and then there was the RV-Park next to our cabin:

So we could also have camped, but apart from the rain, the RV Parks dont provide Ablution Blocks as RV’s all have their own toilets or showers, so camping is really the very last option.

During the night I was bitten on my ankle by something, I felt it and kicked, but as there was no light (as my room was in the basement without windows,) I don’t know what it was, but the bite is swelling and different to previous bites I got from mozzies, spiders and dogs, so, watch this space, more detail to follow as the swelling progress over the next few days.

But the noise was bad during the night, not from the intersection, but from within the cabin, there was some heavy snoring, and as the cabin had Dry-Walled walls, we got up at 4h30 and would have left before 5h15 if Dog did not knock-over his bike, causing a domino-effect on two other bikes (we parked them all in a row the night before for the photo on last nights Blog.) So Pie now only use 1 mirror and Dog was in the Dog-box for most of the day, until he saved me with this little can when I ran out of fuel just a few kilometres from the town where we were going to fill-up, so from Zero to Hero went Dog:

As we left so early, we had eaten breakfast, filled up the bikes, done our e-mails and messages and had ridden 200km by 8h00. The sun broke through the clouds every now-and-then and life was GOOD. The road snaked through the forest and we saw three foxes right next to the road, and they were not afraid of us. Then the landscape changed and there were some hills and farmlands:

Below is a Totem-Pole, but the Indian Tribes used to carve them out of a large tree trunk, here is a Concrete one on the side of a very big Hydro Electrical Plant we passed along the way.

There were plenty of other bikers on the road. We stayed on “The 97” for most of the day apart from a section on Route 29, the roads are in goor condition and we had very little traffic. Dog always chats to the other bikers, this guy was also from Texas and was traveling with his wife on old 1000km BMW’s

But at 10h00 the heavens opened-up and we got drenched, and rode in the rain with very low visibility for 2 hours before taking an early Lunch, we were frozen, and all ate soup and drank coffee.

After lunch the rain stopped and then came the surprise on the day, Bears, several of them:

Not all the people on the road had a good-day, these three guys rolled their Van and spilled all their tools and belongings that were on their trailer.

Note Tex forgot to pack his Kitchen Sink, but he remembered the rest:

Tomorrow we have a “short day” just over 500km’s, but there is some Hot-Spring we plan to go and swim in.