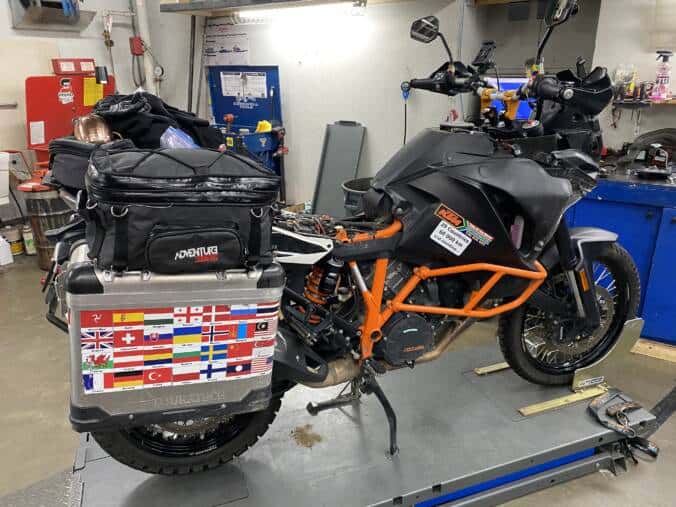 Yes, the tour continues, but without me. I am stuck on the couch at KTM for now.

I stuck my earplugs in and went to bed last night at 11pm while Peens, my room mate for the night, continued packing and sorting out all his stuff. At 1am he finished and then when he went to bed I woke up, with a sick feeling, shattered for the situation I was in, deeply depressed. I racked my brain about where the spare could be and then to my horror remembered that my File with all my bike’s papers was also missing, and that is where the spare keys were, in the file. I was very confident the guys would not have left it in the storage unit as they cleaned it out when vacating it. So I hoped that it would be in Danny Boy’s car as he was at the storage and all extra bags and stuff was loaded into his car, but I had to wait until he woke up in the morning.

I could not sleep, my mind was searching for the key. I then got an idea and phoned Nathaniel from KTM in Jhb and explained the situation to him. He said he would ask around and get someone to phone me back. I later got a call and the guy explained that in an emergency like this they just cut a new key (but it would not have the Micro Chip in for the bike’s computer and Immobilizer, but that the broken key can be touched onto the new key and then the chip would make contact through the new key.

So then I took a photo of the key and started emailing Locksmiths in the area asking if they had such a Blank Key. In the morning only one of the Five Locksmiths phoned back and said he would phone around but doubt he could get one as everybody simply orders a new key that gets sent over-night to them by a Courier, which is not an option for me I thought.

I made contact with Alex from KTM the pervious evening and he said he would come to collect DadAss with a trailer, but only after 10h00 as that is how late places open here.

I never slept again, I made a cup of coffee at 4h00 and woke Theuns up, so he continued packing and I continued sulking and feeling very sorry for myself.

In the morning I searched Danny’s car but no file was found.

I phone Thea who was still at work due to the 9 hour time difference and asked her to please look for my missing file and spare keys in my office at home once she gets home. During Breakfast, (one cant really call the food they serve at these cheap “Oros” Hotels Breakfast, everything is served on plastic and paper plated\bowls with disposable cutlery) Thea phoned to say she looked everywhere and the file is not there at home in Jhb, so the mystery continue. 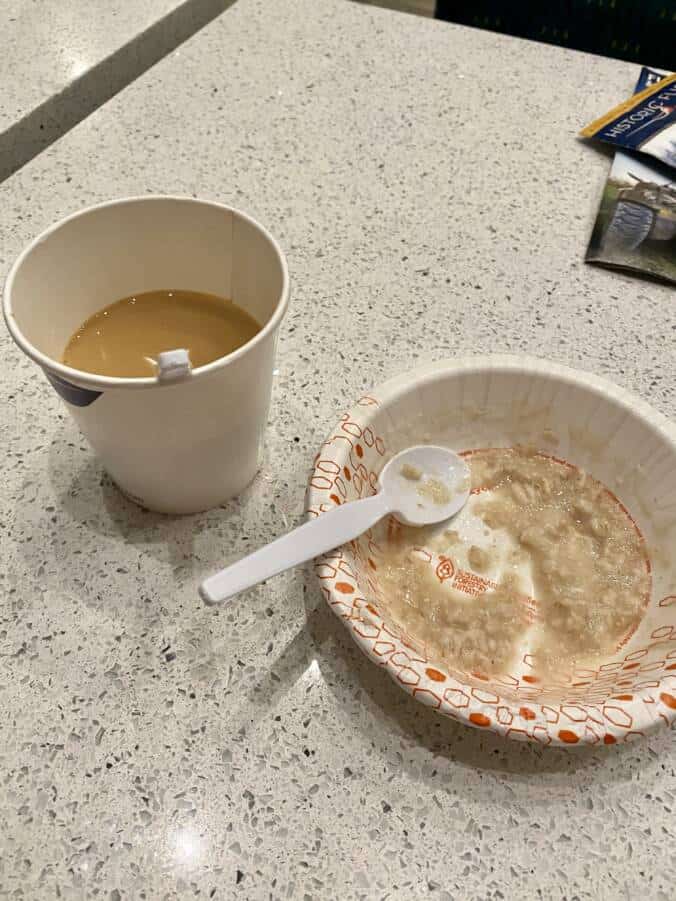 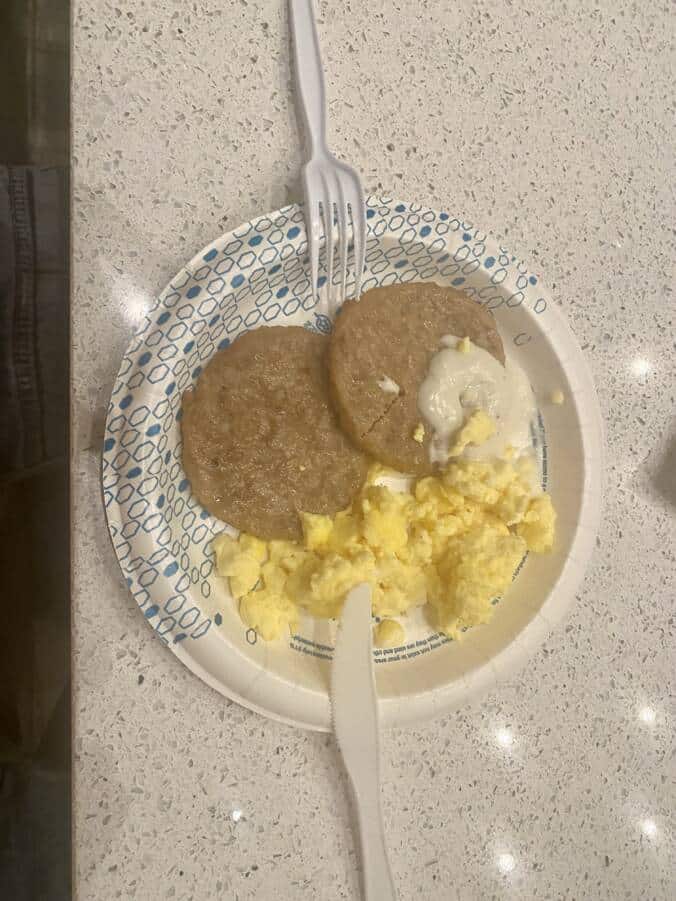 The hotel chain is called The Hamptons Inn & Suites, its part of the Hilton group, the rooms are very nice, there is even an indoor swimming pool and Gym, the rooms are similar to Holiday Inn, its just that Breakfast is not really their thing, its included in the price of the room, for a big room with two Queen Size beds it cost $183-00 for the night for two or 4 people. Once out of the city and on the open  road the prices are much lower.

All the guys followed me to KTM. Alex said he could order me a new Ignition with 2 keys plus the “Orange” key (for coding the computer of the bike.) But the new Lock was in Ohio and it would only arrive tomorrow. Another plan was to remove the current ignition-lock and take it to a Locksmith who might be able to “fiddle” with it and get the key to go in, which would get me on the road by lunch-time and then he would forward the new Lock to me by Courier and then it can be fitted along the way.

The guys wanted to stay with me but I told them that I feel too guilty to stuff-up their trip, I am in good hands here at KTM and a plan is being made, I will very easy catch them if I don’t follow their scenic route via Mount Helen and the coast and just stick to the highway and meet them at tonight’s destination, or tomorrows destination. So after much pleading they eventually left. I made them promise to take lots of photos and put it onto our Groups WhatsApp page so that I can at least see what they got up to and also do a Post on this Blog with something 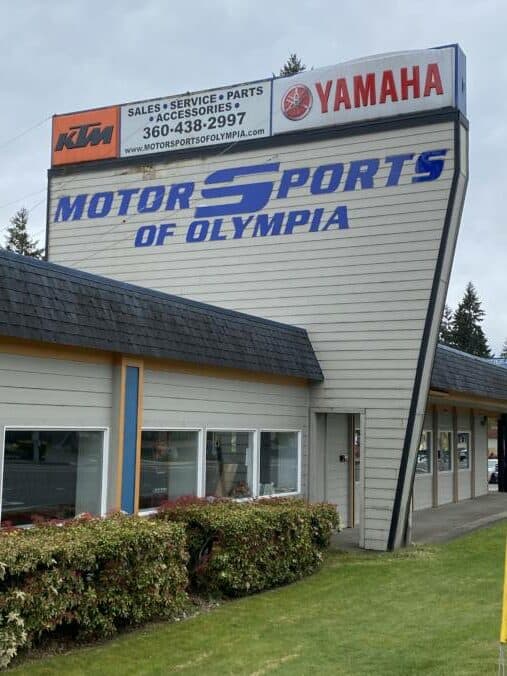 They needed to strip all the panels around the tank to remove the Ignition Lock. 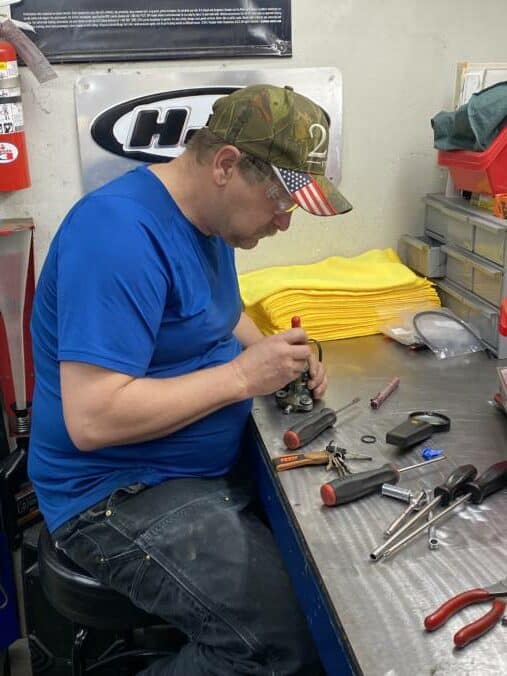 I suppose that a few eggs has to break when you make an omelet. In 83 500km I have had no real bad-luck to speak of, yes small things, but having this Key issue can cause much more issues before it is permanently resolved. To miss out on todays riding and maybe tomorrow and more is sad especially if you take into account how long I have been waiting for this Leg, and the cost involve, all I have is this touring from the Couch at KTM’s Workshop. At least we have no Load Shedding here.

I did not want to bore you with my sad details today, but the objective of this Blog is to maybe one day in the future make a book of it, even if the book is just for my grand-kids to read, my grandfather left us a book of his life, I don’t need to sell the book, its just a slice out of my life, and today’s slice leaves a bitter taste in my mouth.

The rest of the guys just phoned me now to hear how I am holding up, they rode for an hour and then stopped for a coffee, the temperature is only 6 degrees, so not fun for them either, but I would switch places at the drop of a hat.

It has now been 2 hours and the tell me that they have “given up” to make the key go into the lock, and that “we have started drilling.” Not sure what that meant, so when I asked he said that it will mean I can use a screw driver to turn the ignition lock and then hold my key to the screw driver and then the chip in the key will chat to the other chip, all very sociable. But they don’t know Murphy.

I was just also reminded that the Fuel Cap needs the same key, so it is also now being “drilled” and only time will reveal how successful the drilling might be.

I have  now been told my baby has started  and that the ignition has been destroyed, which is excellent news for when the Police stops me and I cant show them the bikes papers and they happen to notice the key is optional to start the bike. The drilling is now commencing on the fuel filler cap, hold thumbs.

Progress has been slow, but it looks like they are happy things are working, so it looks like I will be leaving shortly on the boring route to meet the guys.  I see that if I stay on the highway and then turn towards the coast towards the town we hope to meet at I only have 200km to travel, so I should get there long before them.

Hopefully the next Blog Post wont be this sad.