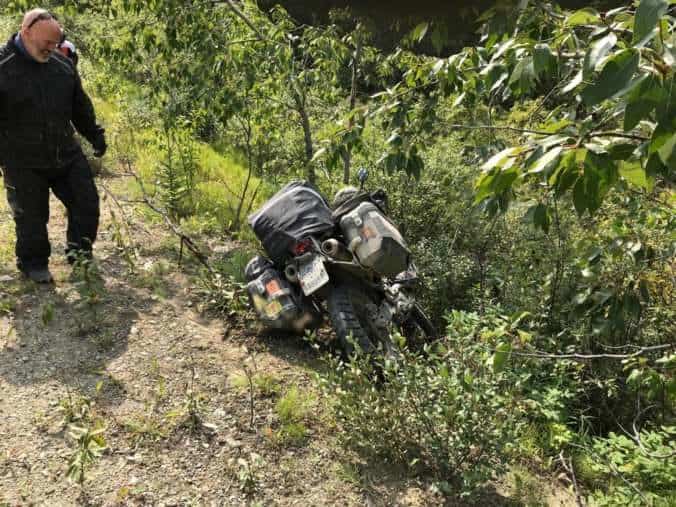 This morning and Rodger went to the local bike shop to buy a new tyre and then had it fitted. I went to Starbucks where the coffee was good and the Wi-Fi even better. That is the reason why the previous posting could have so many photos. Speaking about Wi-Fi, I bought a new Mobile Modem\Hot-Spot-Thingy in Seattle and loaded it with 3 Gigs of data, it was an expensive exercise that failed spectacularly, the service provider AT&T is not in Canada, I expected this, but in Alaska it should have worked, and it did, a total of 2 nights, like all the other places we stayed there was no Network coverage, probably because there are so few people in Alaska they did not bother to provide their service in most places in Alaska. The unused data will expire on the 15th of August, this is how you learn, called school-fees.

Peens did make it to Dawson City, he sent me a photo of a Steam-Engine, is that a sign that he letting-off some steam??? But we have not heard from him again, don’t know what his plans are, but I know he still has some “Admin” ahead of him as his passport was confiscated when he was interrogated when he entered Canada, and then they forgot to return it to him before he left, so he needs to go back to that border crossing to collect his passport, so he needs to do some planning as I suspect we are using a different border to leave Canada to the one he used when he entered, and he has an international flight next week, but all the chaos adds to the excitement in his life, (it would have me lying awake at night, but he sleeps like a baby, actually that is not true, babies cant make the sounds he does at night.) He will have to time his arrival at the Storage to be at the same time as us as he has lost the spare key and he is not getting the last remaining key, so the pressure mounts for the rendezvous in Seattle.

We left town only at 10h00, but 70km out of town I noticed that Kaptain Rodgers light had disapeared, I could not believe it when I turned around and found this:

It turns out the valve was not screwed in properly, so we pumped it and I am very happy to report that the problem is now fixed.

We had a short day, so we jumped onto the gravel and headed to Ross River and along the way hooked-up with our long-lost-riding-Buddies. So we stopped, kissed and made up, then we all headed together down the very poor gravel road.

It was dusty and bumpy for most of the ride. By the time we met-up they had done 200km of gravel and their hotel was worse than ours last night, they also had no Breakfast or lunch and were very Hangry. Driven by hunger and thirst, Dog took the lead and then after a blind-rise there was a sudden 90 Degree bend in the road, there were no signs, and this made the Dog very mad, so he went farming off the side of the road:

Here are some photos of bikes actually on the road:

Last night I named the Hotel we stayed at the “Flea” Hotel, well it turned out that it was prophetic as the fleas and bed-bugs had a big fight about the few –-bites-spots on my legs, some poor fellows even had to bite on the mozzie-bites as there were no for them. Tonight’s Motel is very convenient, it is at a filling-station, you check in and get your keys at the Fuel-Stations shop, so you can buy a garage pie and Anti-Acid while check-in, great. So I wonder how this night will turn out. I booked a Twin room as you never know when Peens’s “Lone Star Tour” might come to this town.

Tomorrow we cross over back into British Columbia, leaving the Yukon Territories behind and will have a relatively short day, about 450km and plan to sleep in Dease Lake.

Tip Of The Day: Keep your wheels on the road and your bike up-right.