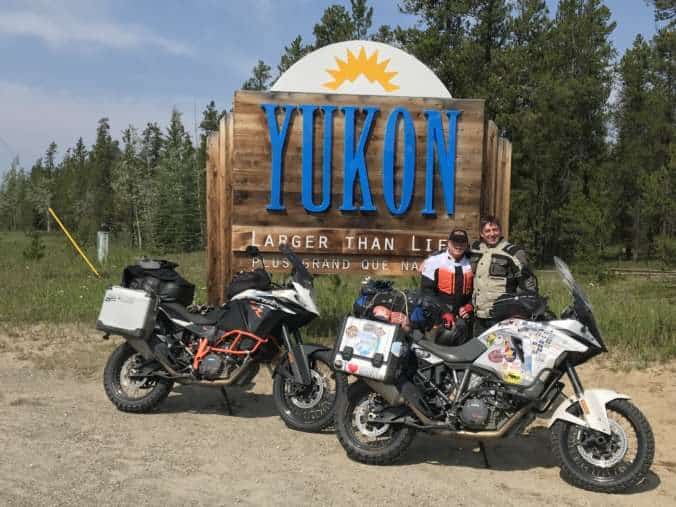 Another correction, today is Day 246 as yesterday should have been 245, I suspect the 3 very long days are messing with my mind, will get it right before the end of this Leg.

This was the sign outside our Motel last night:

We left just after 7h00, without our rain-gear on as the sun was shining, since early. We are far North already, so this is the amount of Day-Light we are having now, and it is going to increase as we continue heading North.

We headed into thick mist and climbed out above it. We have been riding at mostly an altitude of about 700 meters above sea-level, but we climbed to 1200 Meters and had a birdseyeview of the area.

We rode through several National Parks today, like the Rocky Mountain Park, and later:

The road today was much narrower, but they have a wide verge on the sides so that one can see all the wildlife before they run into the road. I had a Black-Bear run into the road, it was the biggest we have seen so far. Rocky had to swerve for some deer, Dog had a Porcupine that ran over the road and climbed into a tree. I was so tense as the road-signs warned us of Animals running into the road.

We saw all of these crossing today, Bears, , Moose and Deer. I even saw an Elk down below in a lake eating the soft grass growing in the shallows. All the animals were so busy eating they hardly noticed-us, remember, the winter is very severe here and they need to get fat now before April, if not, they will die before October. (The reason I know these dates is because there are many signs next to the road informing us that between those winter months the vehicles must have Winter Tyres and they have to have Snow-Chains to put on their wheels to be able to drive on the snow, there are “Chain-Up Areas” before every hill where you pull over and put the chains on your wheels for more grip.

Bison Hear of over 60 Bison.

We have seen the Brown Bear and above is the Black Bear, but none of us has seen the Grizzly Bear yet, but we hear there are many.

Today we had a very scenic route, next to Lakes, over many rivers, and always near forrests.

We are so remote now, there was no town between where we slept last night and where we are sleeping tonight. There were maybe 3 fuel-stations, a few RV-Parks\Camping Grounds, but that is it, no people live here, it is just to cold in the winter. We hardly saw other people, and the only traffice were other Adventure Motorbikes and people in RV’s or people towing caravans, we also saw many people cycling. This guy was from Oz and is taking 17 months to ride from Alaska to Argentina, (zoom in and see his Bear-spary strapped onto his handlebars.

.one feels so alone travelling here, it reminded me of travelling through Namibia, or Siberia.

Here are a few other bike photos:

This guy has the right idea.

Along the way we stopped at the Hot-Springs, it smells very bad and the hot water bubbles out of the ground, but it is so hot one can hardly swim on that side of the pool. I think the water has magic power as my where the Vampire Bat bit me is looking much better after lying in the hot-pool for a half an hour.

This is a photo of yesterday, not sure if I posted it???

Tomorrow we have a short day, we ride to the next town on the map, Whitehorse.