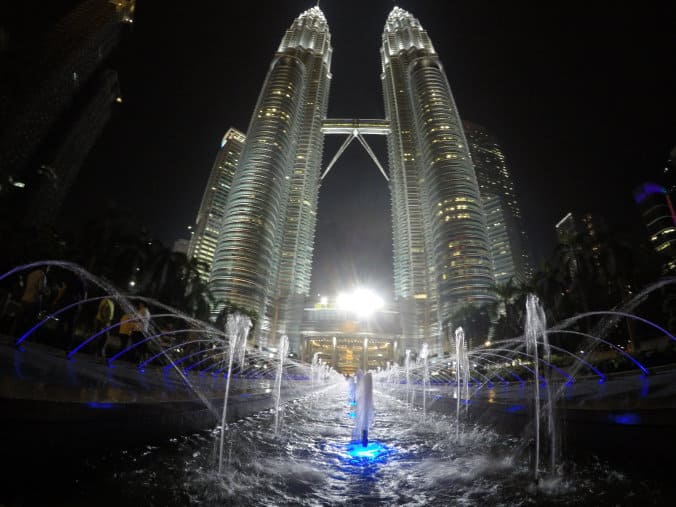 “We did’t know we were making memories, all we knew was that we were having Fun !!! ”

That is what has been running though my head all day. How super blessed, lucky and fortunate I am to have been able to complete part of my Dream-Trip. The continents that await will no doubt have a few curve-balls and surprises, pleasant and un-pleasant, but I think we have by now figured-out the “Recipe” to make it work.

Last night we walked to the Petronas Towers, it truly is a very impressive building, the two towers are connected at the base by a very large shopping mall, and there is a sub-way station and bus terminus underground. You can also take an off-ramp on the highway to the towers that goes into an underground tunnel all the way under the city right into the parking garages.

I was very upset with myself last night, when I wanted to take the 1st photo my camera told me that I was an idiot and that my memory-card was still inside my Lap-top (which was enjoying the air-conditioned Honeymoon Suite and the company of my I-Phone.) So the only recording device was my Go-Pro camera, which is not known for low-light quality photos.

I did manage to take some. 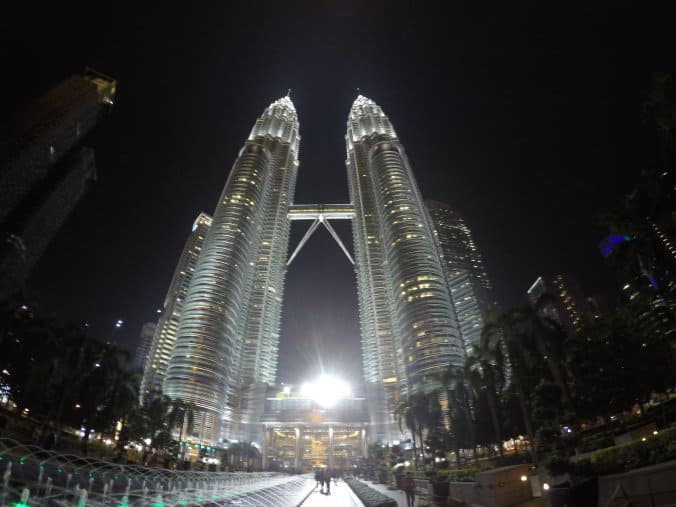 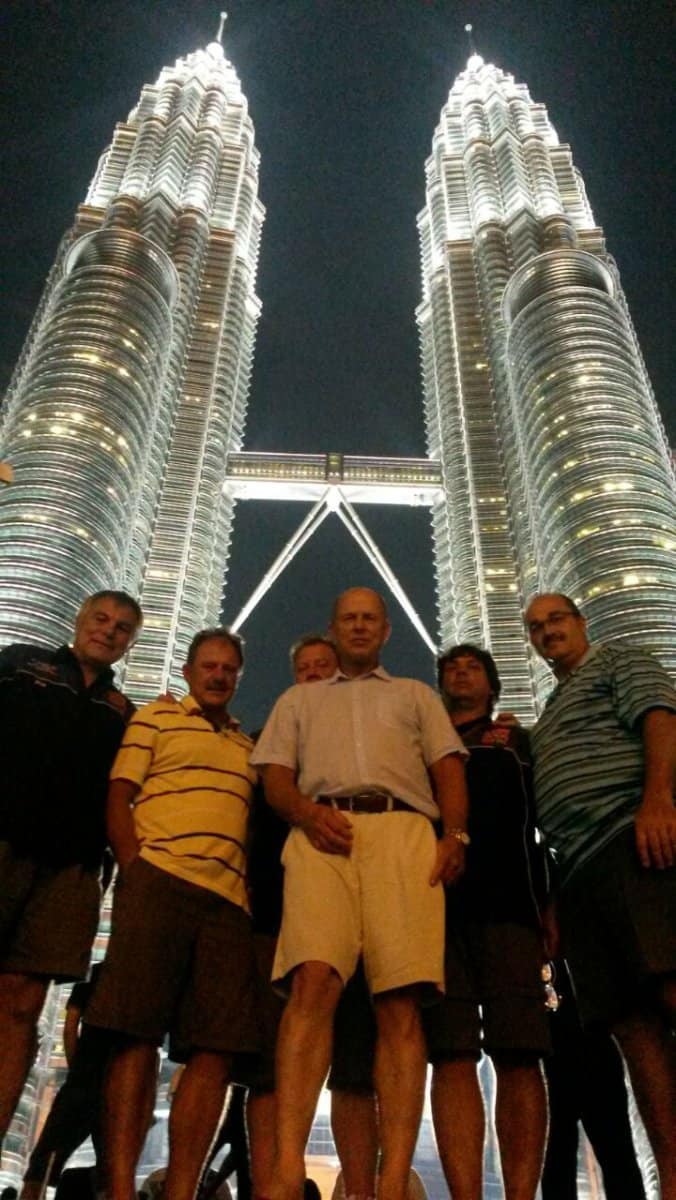 After we strolled through the mall we took a taxi to another impressive building, the KL Tower, (it is a tower similar in appearance to the Hillbrow Tower, but only higher and with several viewing decks and a restaurant close to the top. We took the lift up to the Sky-Deck on the 102nd floor, (Carlton Center, one of JHB’s highest buildings only has 50 floors.) There was a glass-box that is cantilevered out over the edge of the building, another one of Pies Cell-phone photos. But it is not for the faint heated as it has a glass floor and you can see the street 300 meters below, and they restrict only 6 people at a time, yet all 6 of us went onto the glass and I could not help thinking if the designer had taken into account that some of the 6 people could be Boertjies who might skew his calculations, specially if some starts jumping in the air and the glass starts to shake, (luckily the security guard who’s main job it is to be on the look-out for Base jumpers he stepped up to the glass deck and threatened to evict Peens) Here is a photo taken with Pies I-Phone. 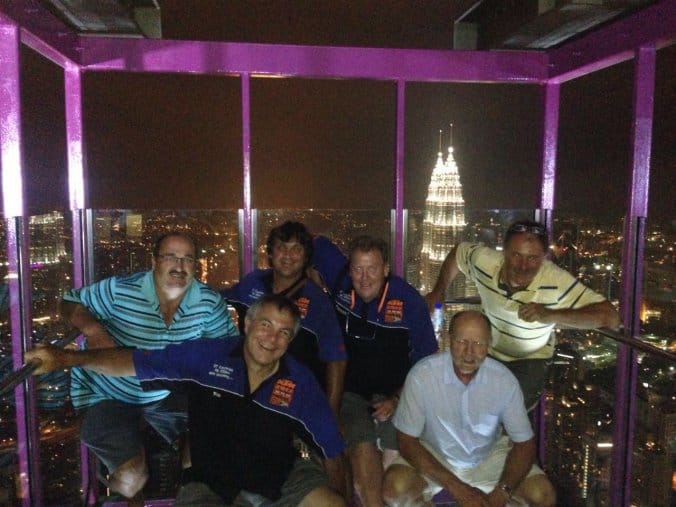 This morning we wanted to beat the traffic and left at 6h30, but Peens and Hennie overslept and we eventually left at 6h45. We arrived an hour early for our meeting with Mike, the shipper, scheduled for 8h30, and went to another corner “restaurant” for condense milk-coffee and curry-with-a-hurry, but this time we also got a chilly-onion omelette, just what the Dr. ordered for some stomachs in recovery.). The “waiter” befriended us and soon him and Peens were discussing Peens’s other passion, fishing. I doubt that Peens’s new fishing partner understood how extreme fishing off a Jet-ski might be, yet they had something in common. 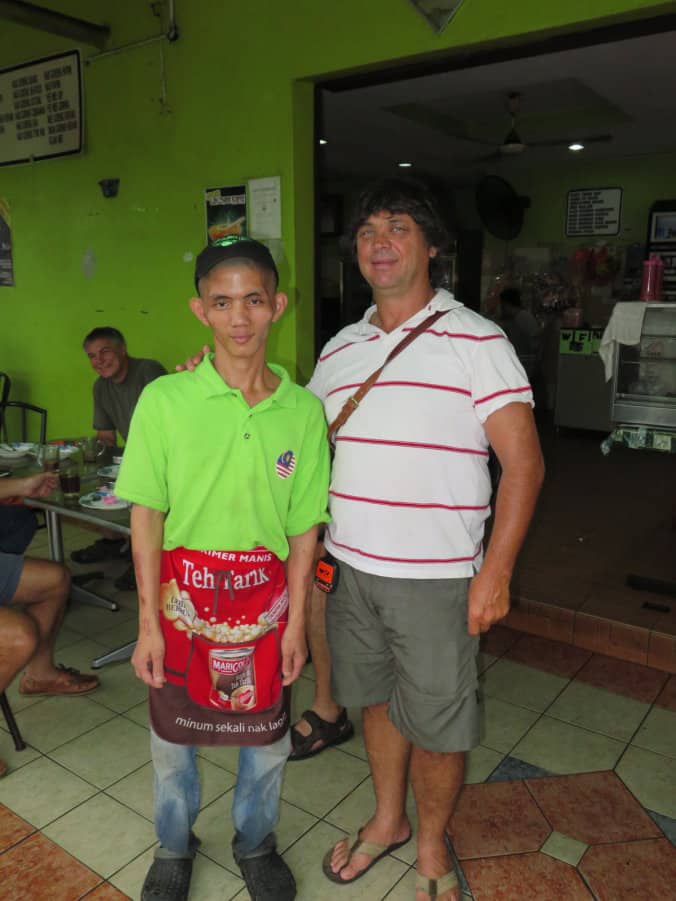 We met at Mike’s office but he was waiting for us at our office (the restaurant we took over the day before. So while Tex was trying to communicate with Mike, Pees went to the street vendor and bought some “KFC” for the few street-dogs staying in the street in front of our shippers offices.
We then followed Mike to the docks and he had to get us all checked-into the into the customs yard where our container was waiting. 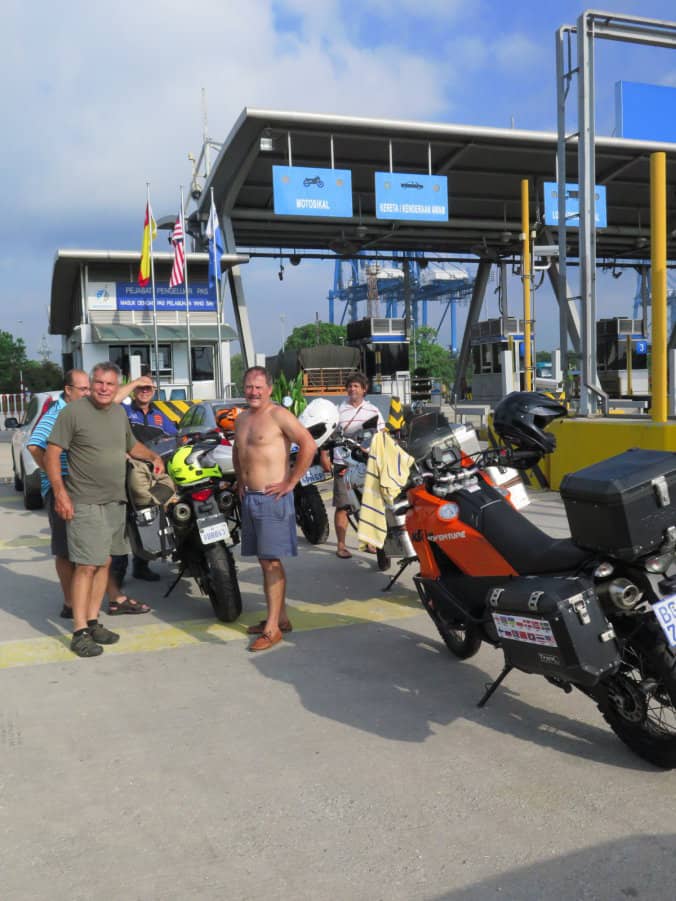 The American bikes are going to be crated so the screens and the mirrors were removed. All the bikes batteries were disconnected and the vehicles were strapped and tied-down. Just a short note on screens for those hard-core KTM bikers following this “Food and Restaurant\Travel Guide,” my new touring screen is a huge improvement compared to the normal screen or the older touring screen. I can comfortably sit without any wind on my helmet even with my Go-Pro Camera stuck on my helmet. All the wind is deflected over my helmet and past the sides of my shoulders, so no more neck jerking in the wind or fighting to sit on the bike in strong head winds, it all passes over and around you. A visor on the helmet is now only needed in the rain just because the drops stings, but it is no longer needed to protect your eyes against the wind. 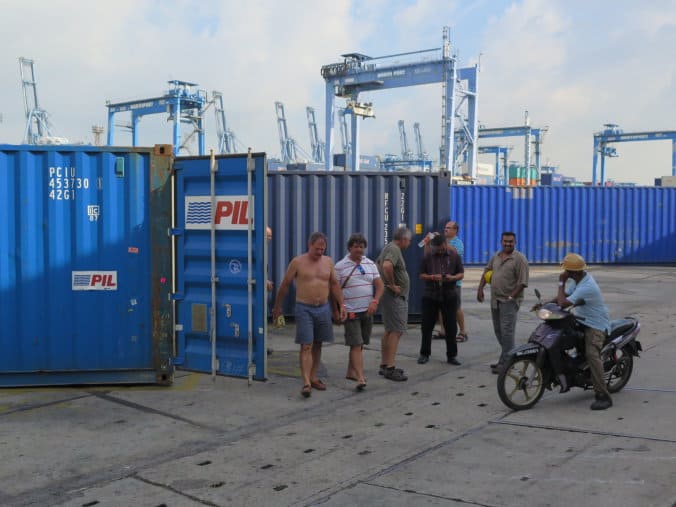 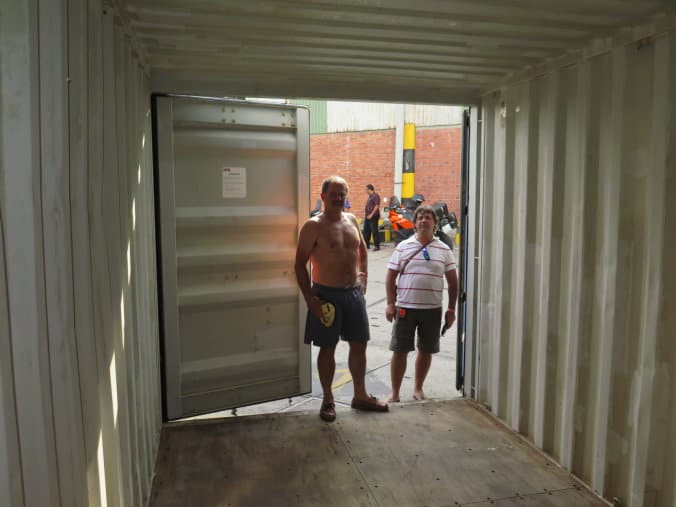 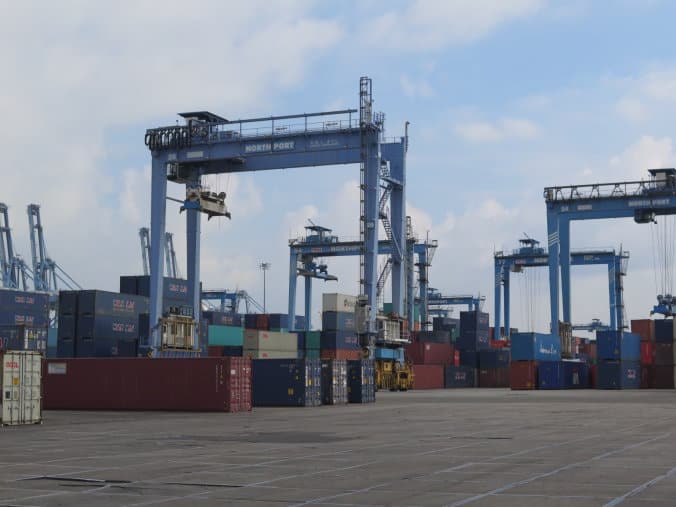 I saw this interesting vehicle. 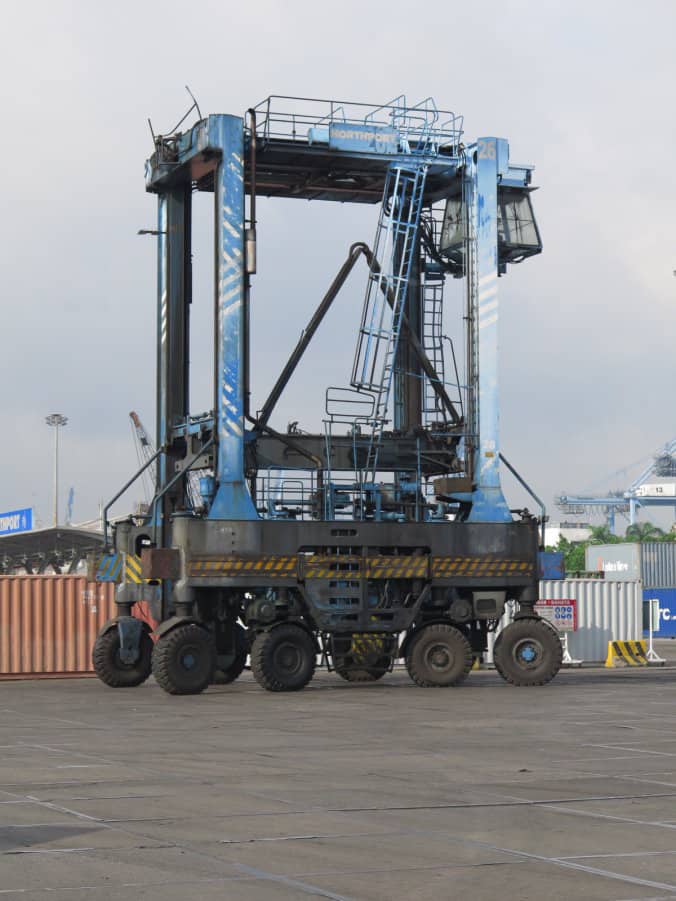 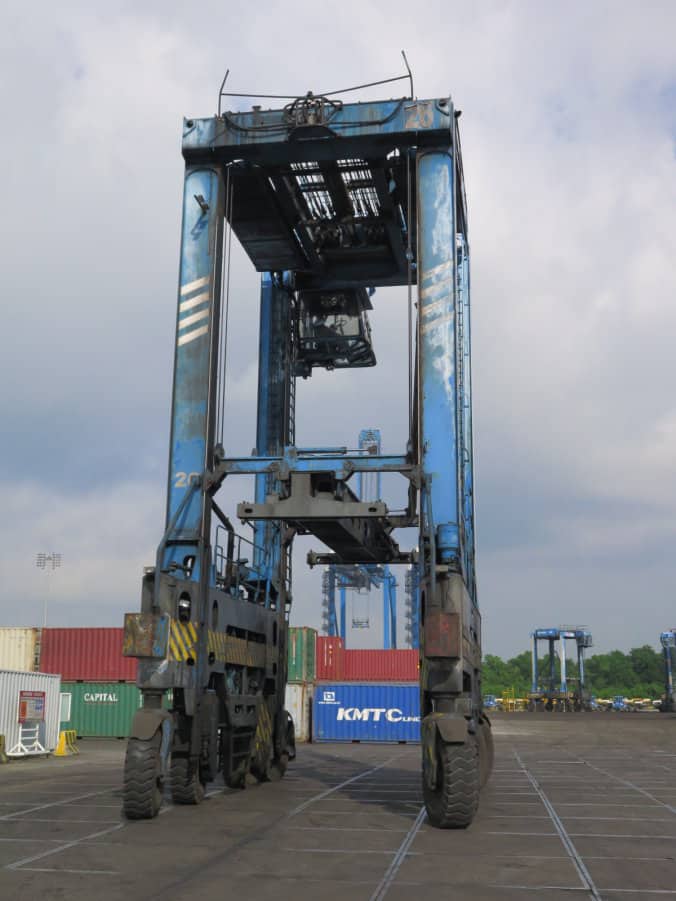 Nice to see Tex and Pie getting busy to work on the RSA bikes, they had to remove the batteries.

And then we took a taxi to the airport and managed to get a flight to Singapore from where we will connect tomorrow morning at 2h00 to JHB and arrive at 6h55, (6 hours time difference between RSA and Singapore.)

But, during all the confusion when we left Thailand and entered Malaysia, Pie did not go to the window to have his passport stamped and his fingerprints taken. As a result he was escorted to the underground dungeon of the airport and interrogated, but he turned the problem around and told the official that he had a stamp showing he exited Thailand at that border and it was not his fault the Malaysian Customs forgot to stamp his passport and that they should train their staff better.

Nothing seems to scare this guy who has been around the block a few times, so, eventually he was released and all 6 of us are now sitting in the Plaza Premium Lounge drinking a farewell beer and reflecting on the past 10 trips we had, but more about that tomorrow.

I also hope to post some photos the others took on their phones during the trip but never sent it to me, until now. I also hope to post the Video of us following the Traffic Policeman through the toll-gate against on-coming traffic, (if I can just teach myself how to edit and post videos.)