We had a wonderful breakfast with all the tourist that slept at Sani Top Chalets with us and then we went for a photo next to the newly opened Mall of Sani. 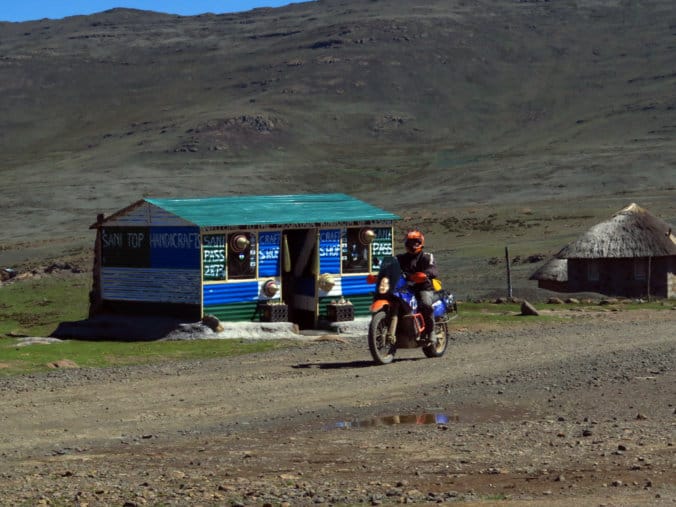 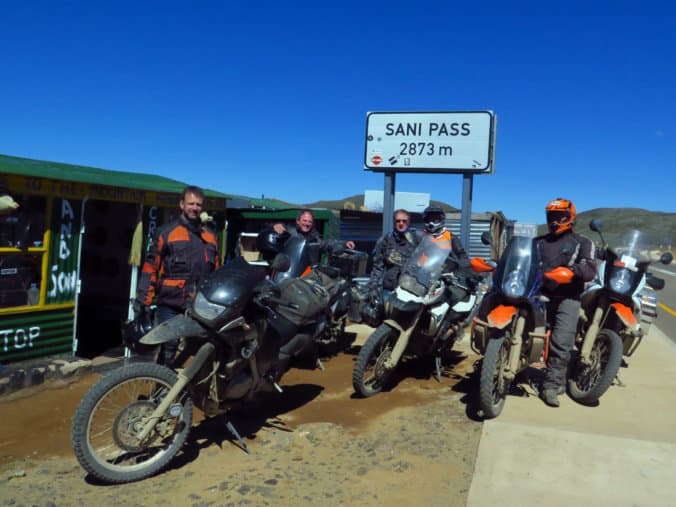 We were surprised to find a newly tar road that was built between Sani Pass and Mokgotlong. I was very thankful for this 50km Get-Out-Of-Jail Road as I knew that we had a 80km stretch of road classified as a 4X4 Road ahead of us past Sehonghong and I remember how the last 40 km of the days ride was done after sun-set the last time I did this route. The feared Matibeng Pass was to be conquered today and at the end of the tar I turned onto the gravel towards Tsabatseka, not re-grouping but just waiting for the 1st bike behind me to see I turned off, big mistake, as I forgot that Murphy had switched from riding pillion with me to being Peens’s pillion.

After 20km into the 1st stretch of gravel I found a nice spot to stop for a photo of the bikes behind me, but only Charles arrived, we waited 20 minutes and then turned back. Our average speed was only 40km per hour, so by the time we got back the the others almost an hour and a half had passed.  Peens had a puncture and the spare back-tube was with me. They found a “workshop” in the field next to the road where the tube was patched, but due to 2 broken hand-pumps at this “workshop” the tyre did not “pop” back into position after it was replaced, (it is supposed to be pushed back into its correct position by the expanding tube which did not happen as the tube could not be inflated enough with the broken hand-pumps. So Peens reverted to his default setting, “Violence” and started beating the tyre. 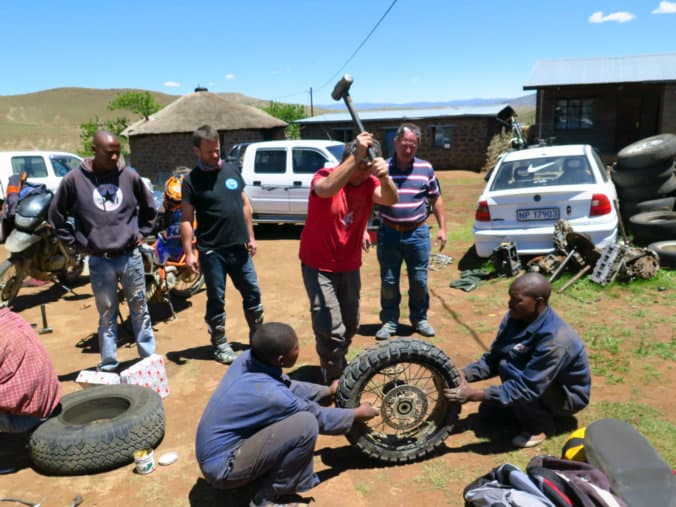 We lost two hours due to this.

We continued to ride in the Lesotho Landscape (without any trees due to the high altitude and extreme cold weather) passing through little villages with friendly locals waving back and the odd kid trying to extort sweets from us by holding out one hand and showing you the stone in the other hand. We blamed this on the tourists who travel in 4X4 who can easily stop or throw sweets out the window, but on a bike it is a different story due to all the protective clothing we wear, and thanks to the protective gear we did not worry too much to dodge the odd stone thrown with poor aim, (their aim got worse when they had to turn and run away when they realized that these bike were not slowing down and was coming straight at them.) 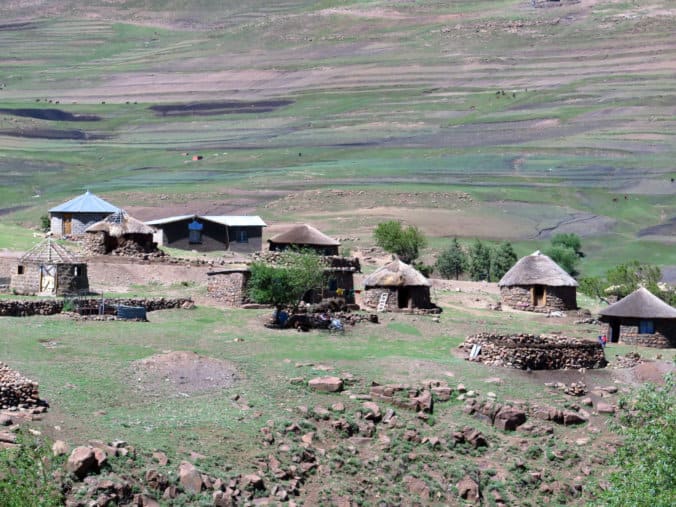 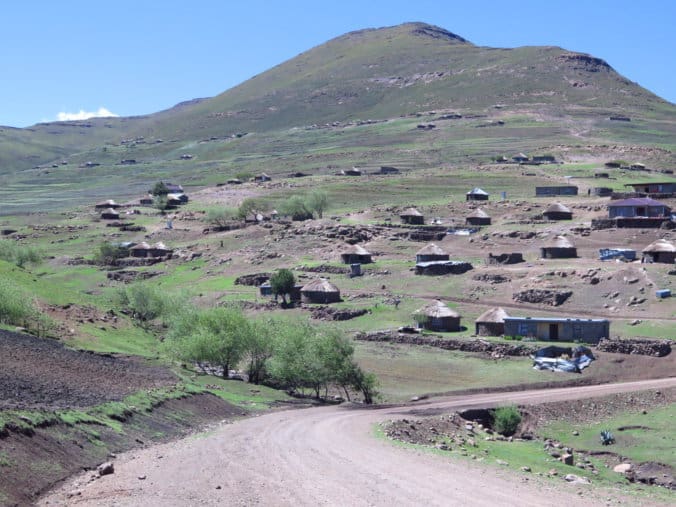 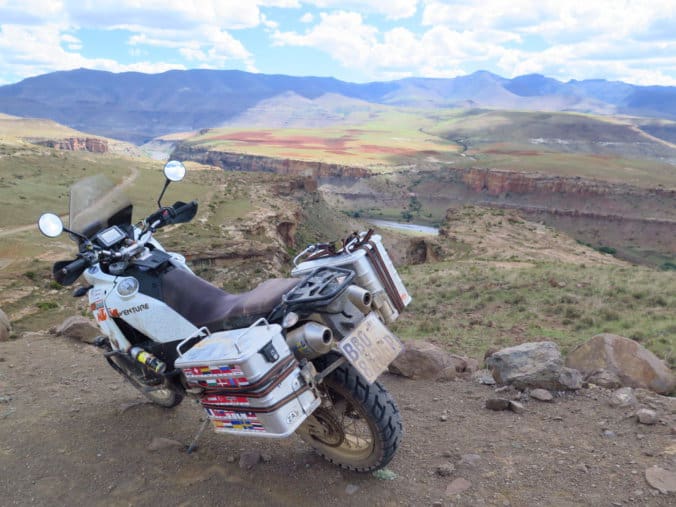 We continued without another major incident (apart from Charles who bounced onto a large rock and found his bike stuck on the rock with both wheels  off the ground, needing a hand to get going again.) We turned off the “main road” in the village called Taung onto the 4×4 Road.

This road was definately in better condition than the last time and I could almost taste the 1st beer in my mouth. We were in high spirits and enjoyed the scenery and waving at the many shepherds we passed along the way, all dressed in the Lesotho National dress, gumboots, blankets and a balaclava, (even in Summer.) 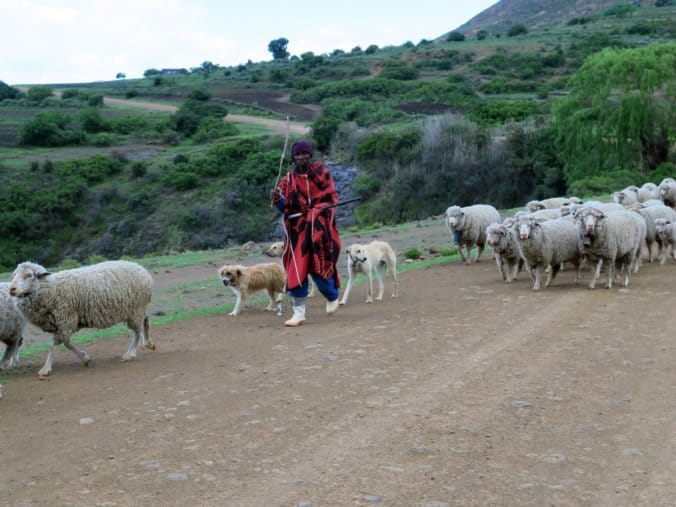 Note the 2 dogs in the photo, they are used for hunting rabbits and they actually herd the sheep like traditional Sheep-dogs.

But, Murphy had switched bikes again, he was not riding with Charles. 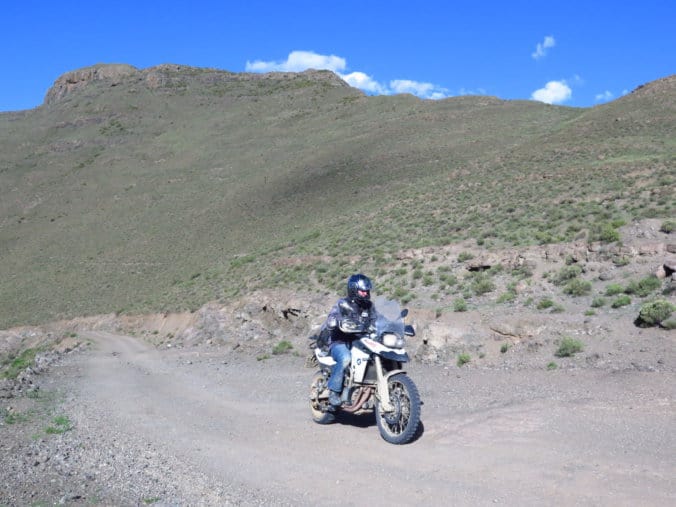 Few Kilometers after I took this photo this is what I found : 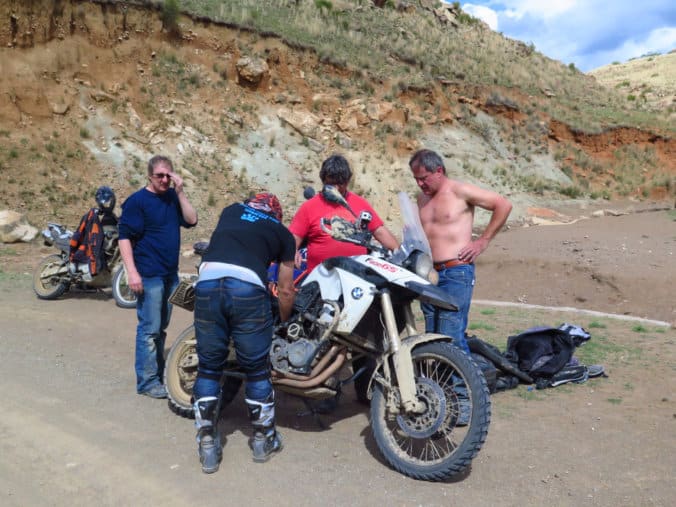 The worst thing that can happen is an electrical problem, the bike just died and we discovered that the instrument lights would come on and go off when we touched the main wiring harass. I remembered that Pie’s bike also just died in Istanbul while he was driving, and that was due to a faulty battery, so I suggested we jump-start the bike with McGiver, (as it became known over the next two days,)  a pre-charged jumper-battery-booster-pack. This worked and we were thankful that it was not the wiring harness. But Charles soon discovered that he had to keep the revs above 3000rpm’s for enough electricity to be generated to supply enough spark for the spark-plugs. This is easy on a tarred road, but when you are doing technical riding on a gravel road where engine-breaking is done using the motor and low-revs it becomes almost impossible. As a result the bike died every few kilometers and the going got slow. As the sun kissed the horizon we rode into town and checked into the newly built hotel in Quatcha’s Neck.

We had dinner with 20 Israeli Tourists on their way to Katze Dam, I smiled when I had a look at their tour vehicles, apart from the few Land Rovers (not known for their reliability) there was also a few small Nissan X-Trails, (not known for their ground clearance) and they were going to go up Matsibeng pass the following day, shame.

The lady at reception phoned the guy who owned the “spare-shop” and Charles organized with him for an emergency delivery of “the smallest Battery in the shop” as well as battery clamps and battery-leads or jumper leads.