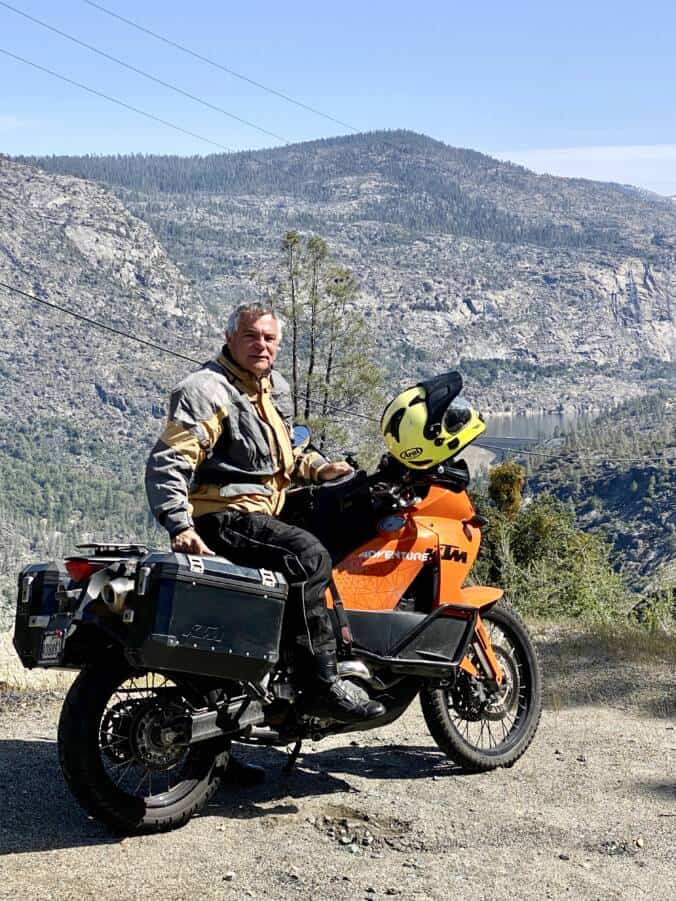 We slept in a very Romantic little hotel last night, Peens switched on our electric fire in our room and I can see why so many people from SF come here for the weekend, it is at the entrance to Yosemite National Park, and if you are not the Camping Type and need more luxury but still want to see the park then this hotel is just perfect.

After Breakfast at the Saloon in the village we continued on the unbelievably good Californian Road, the 120, to the gate of the Park. 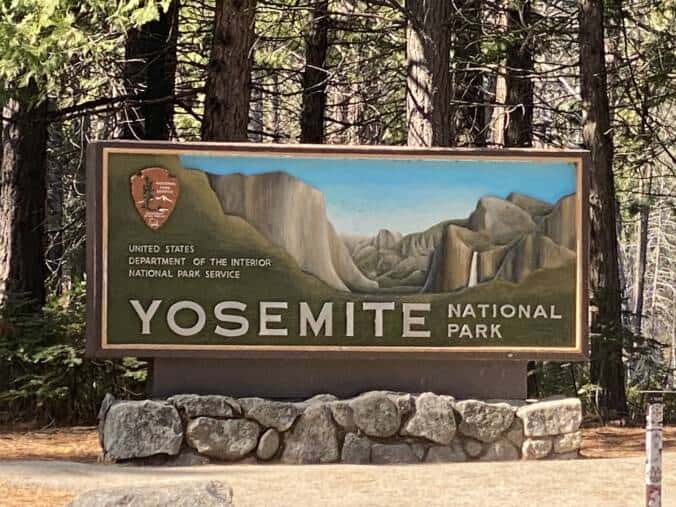 There we received bad news, the East Gate that we were heading for was closed as the snow has not melted on the mountains yet and there were also some rock falls. Well we did not all get the bad news as only Tex was speaking to the Ranger and we were all a bit confused why it was taking so long to enter the park. 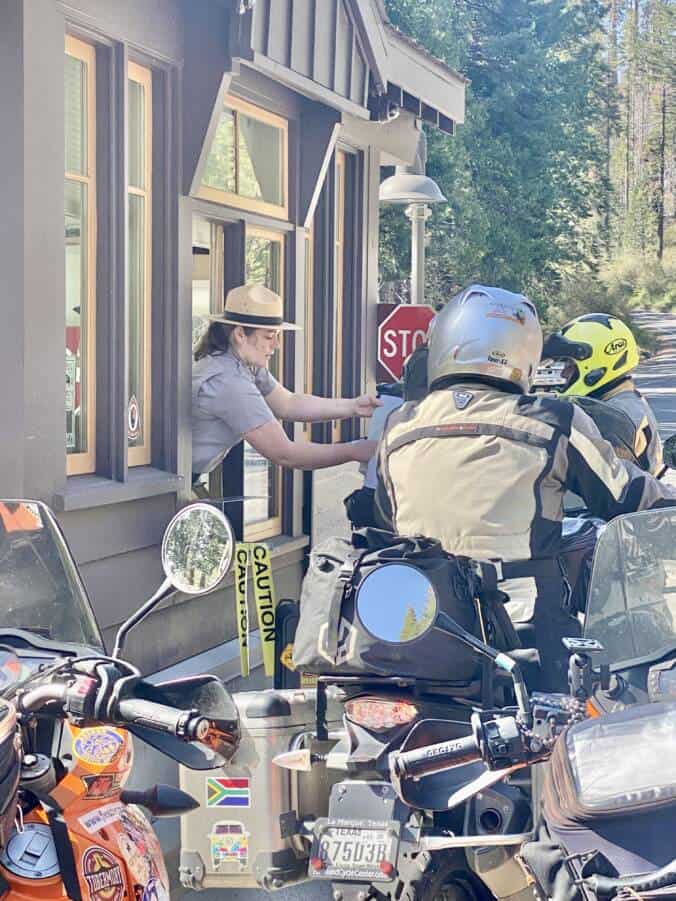 So a lot of Map-Checking and re-route planning took place to figure out what we could do as we wanted to ride through Death Valley, the driest place on earth on our way to Las Vegas, but if we exit the park at the South Gate there was no easy rout to Death Valley, and at least a 300km extra ride. 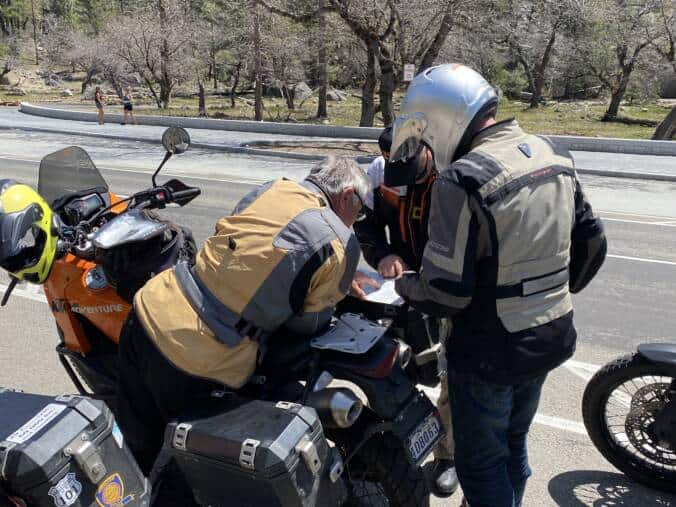 Here are some of the photos from Yosemite Park. It is basically a very large forest with huge Granite Mountains, very popular with Rock Climber who come here from all over the world. Most of the action is in the valley where all the camping sites are and it was very busy in the camping sites. The main thing of this park is probably the camping and hiking, and cycling. Everywhere we traveled you see cyclists and many families with the babies in little trailers being towed by the parents. We also saw several older couples with their dogs in the trailers where many years ago their kids probably were. 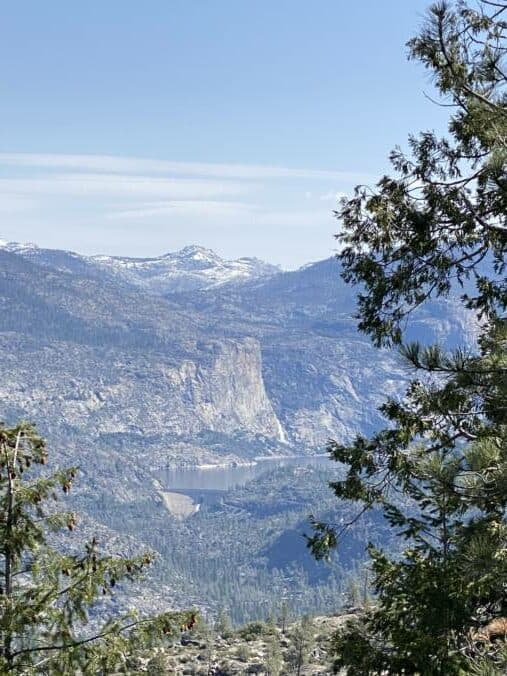 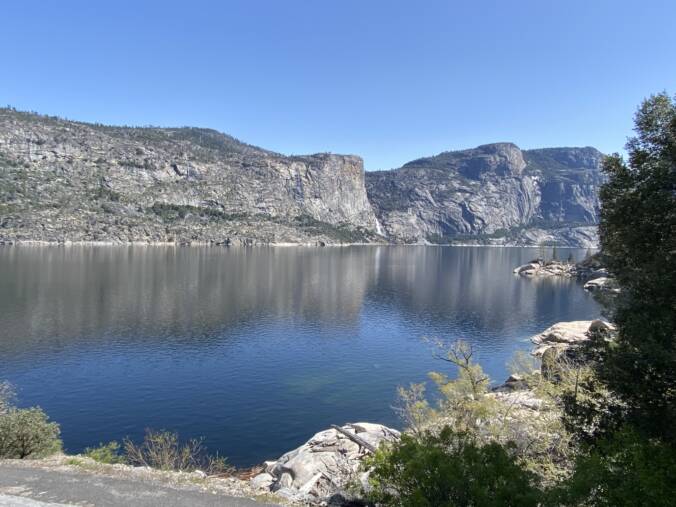 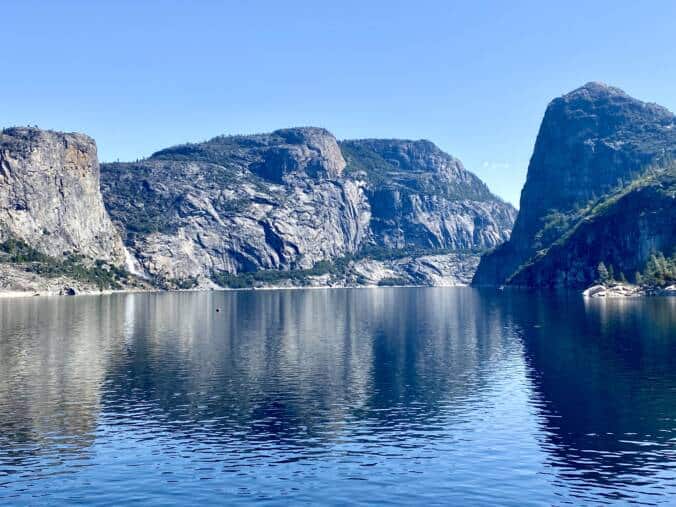 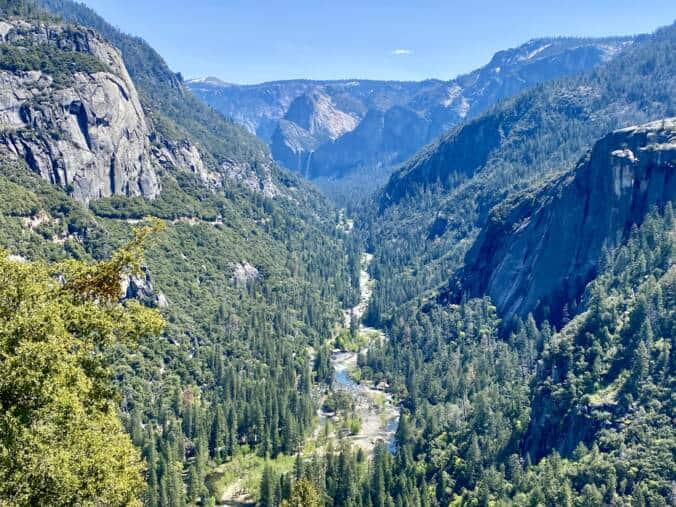 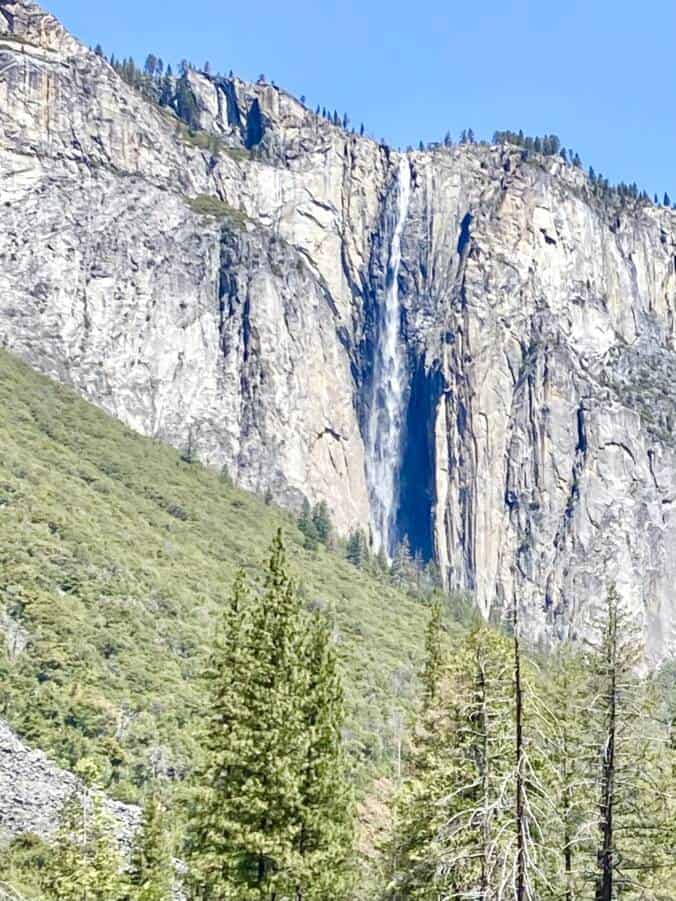 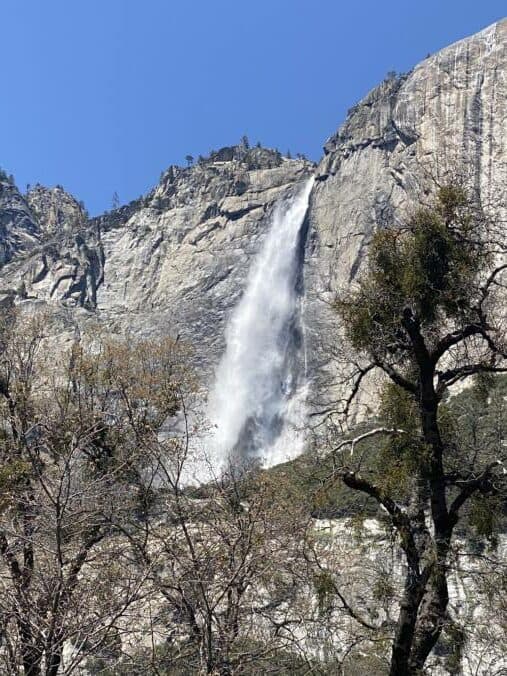 Below is one of the “Rocks” the climbers climb. There are people with long camera lenses and binoculars watching the climbers. On this “rock” one could see a climber who had slept there the night before, he\she had a little “tent” hanging on the side of the mountain in which he\she slept. There is a rumour that there is a Ranger who drives past this Rock every night on his way home which uses his Loud Hailer and shouts at the climbers sleeping there, hanging on the side of the mountain, he says to them “Good Night, sleep tight.” 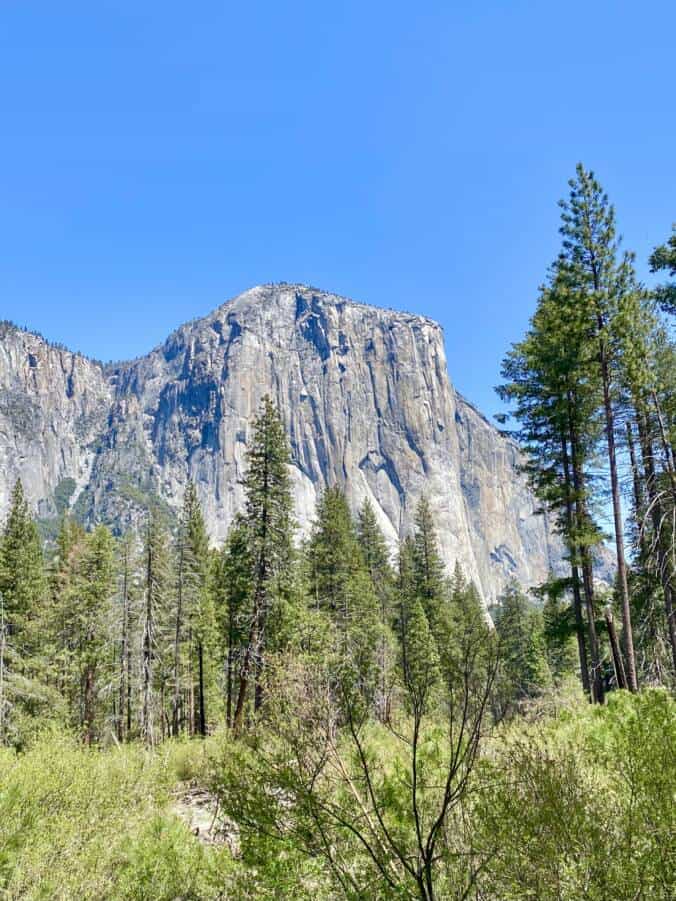 This park is famous for its very very old and tall trees. I thought their real name were Red Woods, but they are actually called Giant Sequoias. Some of the trees in the park are 3000 years old and on record was one that weighed 640 Tons. As I am typing this blog, half of the guys are hiking to see a tree that is 3000 years old, the other 4 of us have decided not to do the 8km hike as some wants to take an afternoon nap, another is going to bandage his injuries he sustained before this trip and my excuse is you all reading the blog. Last night everyone went out to a restaurant for dinner, I stayed at the hotel and did the Blog, both postings of the Blog as I did two postings last night, the 2nd just with photos. FYI I wont be doing that again as I discovered that some people only looked at the 2nd Post of yesterday and never read the long one with all the many photos I posted on the 1st Post. I discovered that, according to Danny Boy, my Blog is difficult to Navigate as there is no Index  for each Leg, and further according to him the “Next Post” and “Previous Post” that appears under my days Post is far too small and people don’t see it and therefore only read the last Post that appears when you go to the Website. So I contacted my Computer Guy and asked him to make these bigger, and in due course we will add the Index to each Leg of the trip so far. I was also told I am Political Incorrect and was given a long lecture on how I should in future be more political correct, so I will also do that in future.

OK back to why I am Blogging and not hiking: Tonight I need to do some washing and it looks like we will be getting in late tonight as we will need to do extra distance to overcome the closure of the East Gate.

Here are some photos and info on the Red Woods: 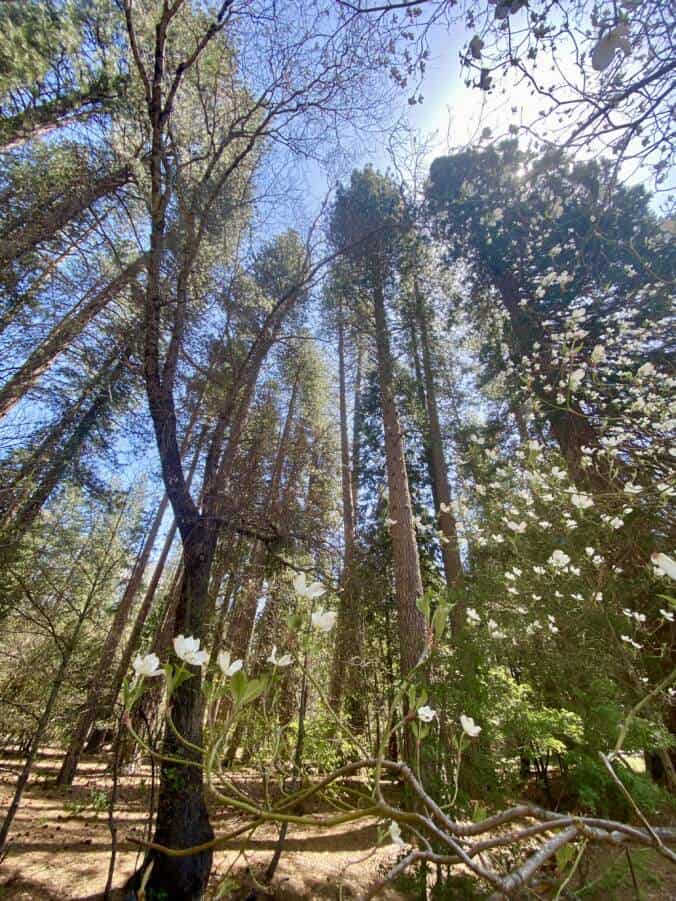 There was a Cross-Section of such a tree, 801 years old,  and then an explanation what they could learn about that trees life: 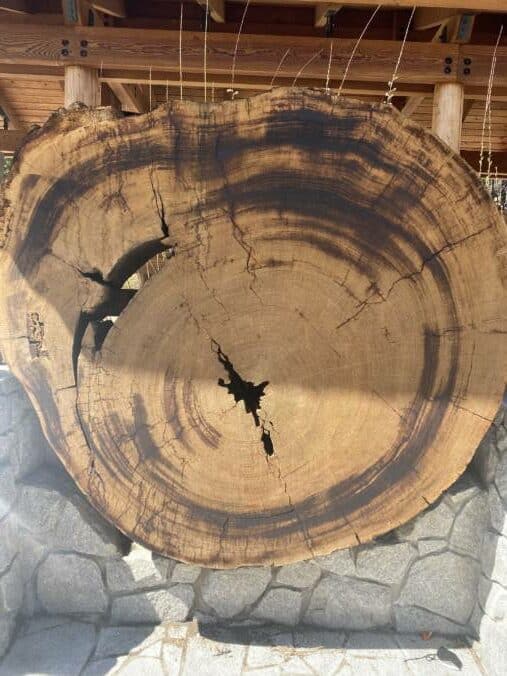 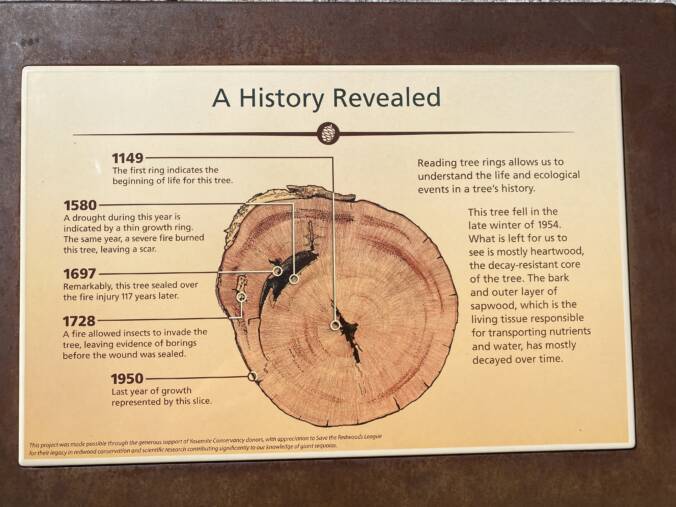 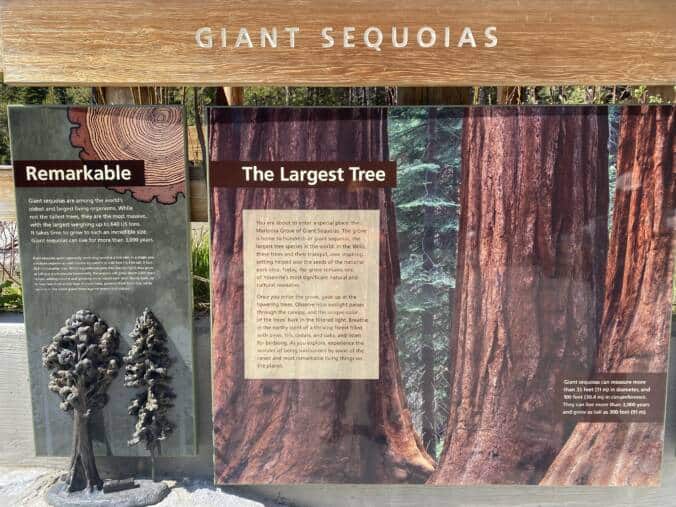 This is the small Electric Tesla, (there is also a larger SUV Type and a Sports Car Type.) There are plenty of them here in California and they are very popular. 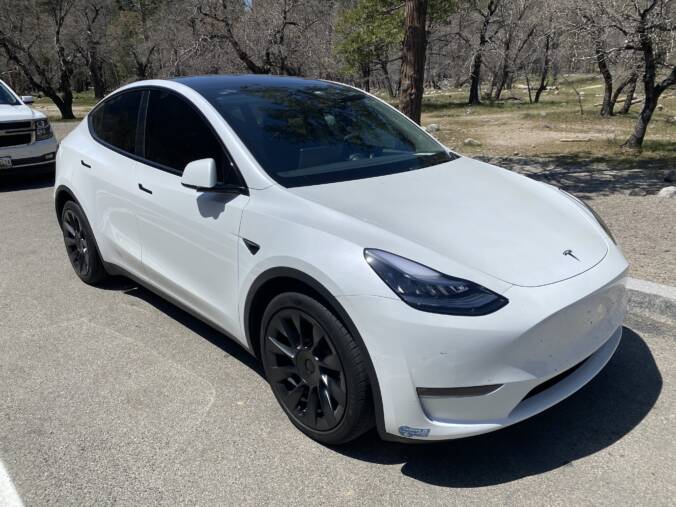 We visited a Lodge in the Valley, we thought we would have lunch there but it was far too expensive and there was a 45 Minute Waiting List to get in, so we bought ice-cream and sat in the sun and ate ice-cream. 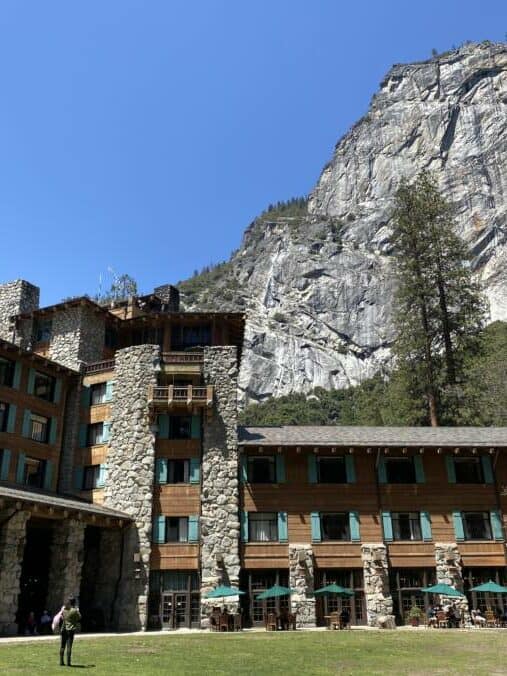 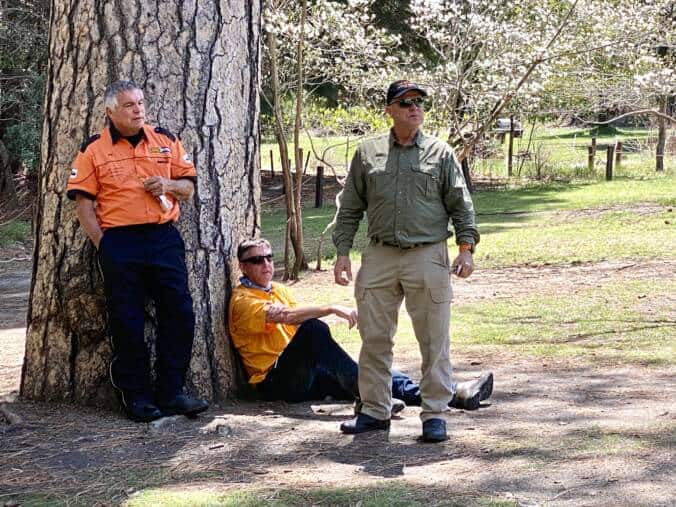 I should have started taking photos of License Plates of each state we visited from day one, in which case I would by now have had 33 or 34 photos as that is the amount of states we have been through so far. 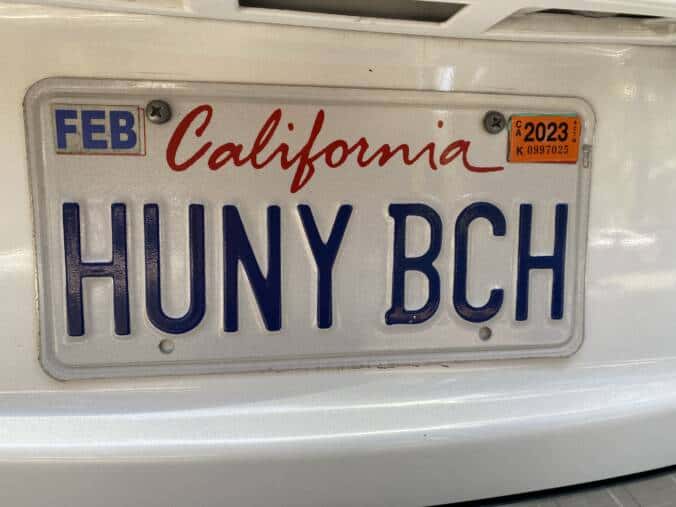 Yes, the little hike turned into a 3 hour mission. The guys are very ” hangry ” and no power left to continue further, so the call was made to sleep in the 1st place we could find a bed. So once again my night not working to plan as I am sitting doing the laundry and the rest of the team is having dinner. But in their defense, we who did not do the hike ate a late lunch while they were hiking, so not really need food.

Who knew it was so difficult to do Laundry? There was a Lumber Woman (yes she cuts down trees,) who did help me a little with getting soap and change, but then she left and I had to try and figure stuff out by myself. I think I nailed the section on Colours the machine asked me, I went for Bright Colours and not Whites or Colours. But then I was asked Perm Press, Small Load or Delicates and Knits and panicked,  Thought the machine will just wash a little if I choose Small Load, and Perm Press sounded unfamiliar, so I went with Delicates and Knits, not sure the clothes will be clean. Actually all went well until I bit open this little box of Laundry Soap and inhaled the powder when the box burst in my mouth. Thea my dear wife, here is proof that I did wash my clothes myself, OK. 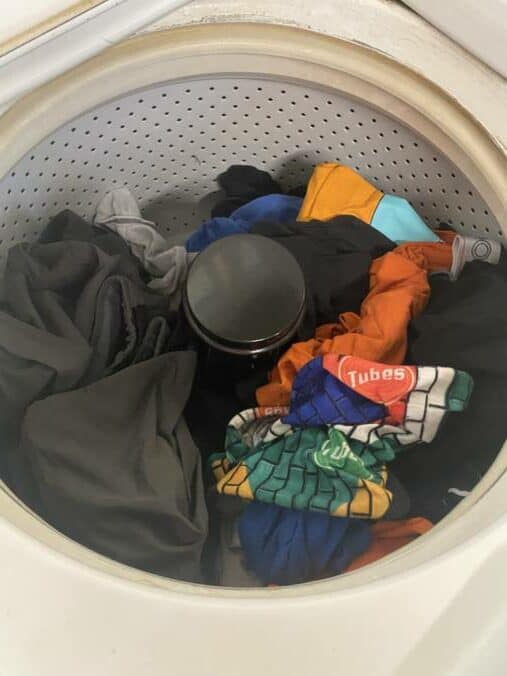 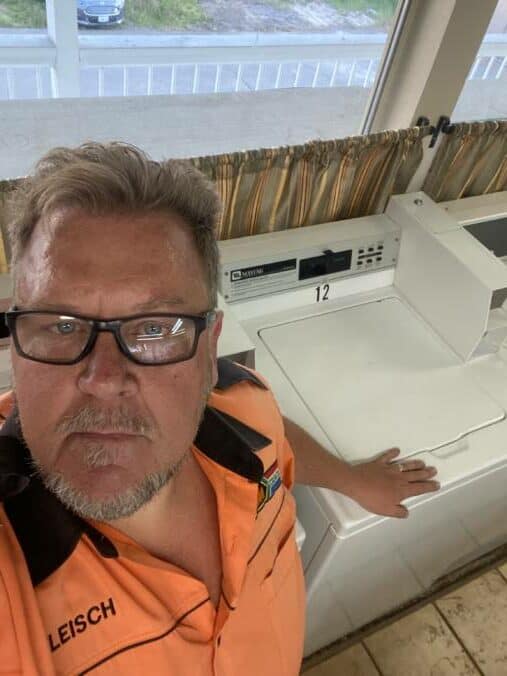 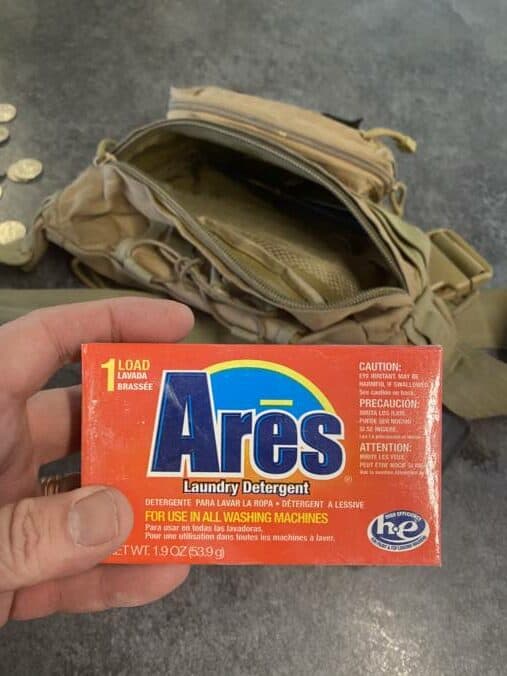 Here are some of the photos taken by the group today: 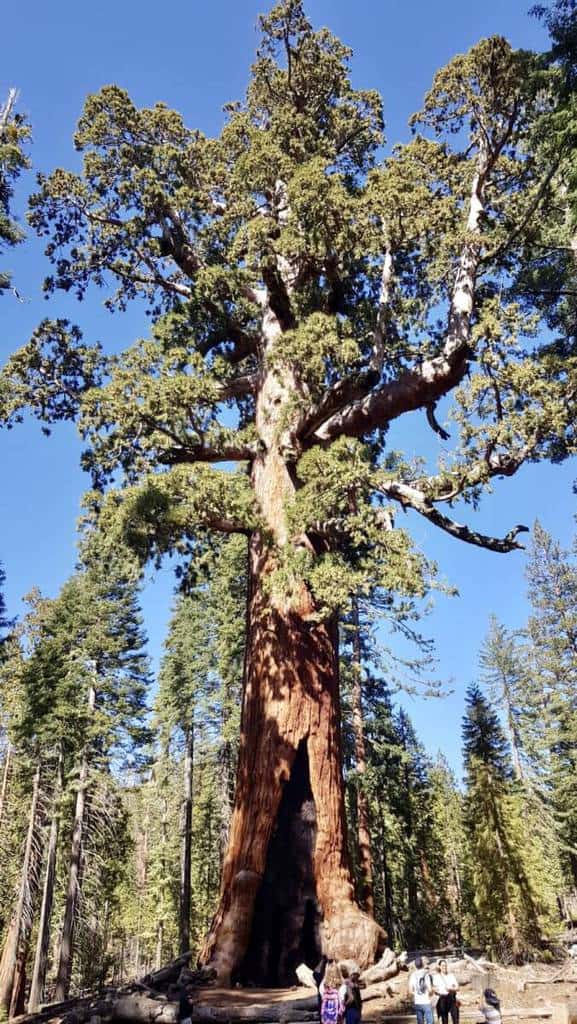 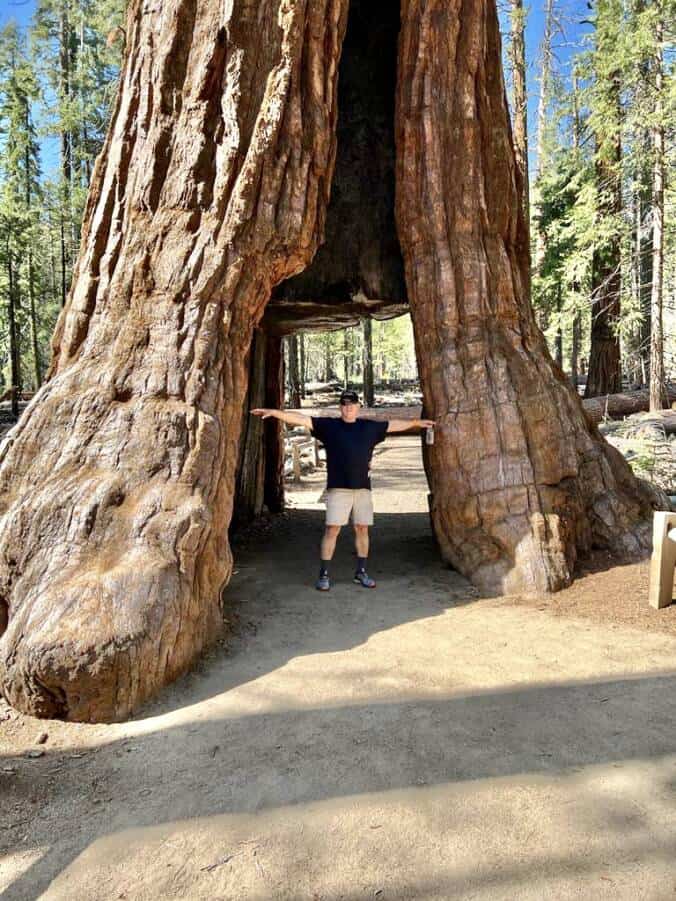 It seems Danny’s hands can also swing a spanner to adjust chains and not just operate a Calculator. 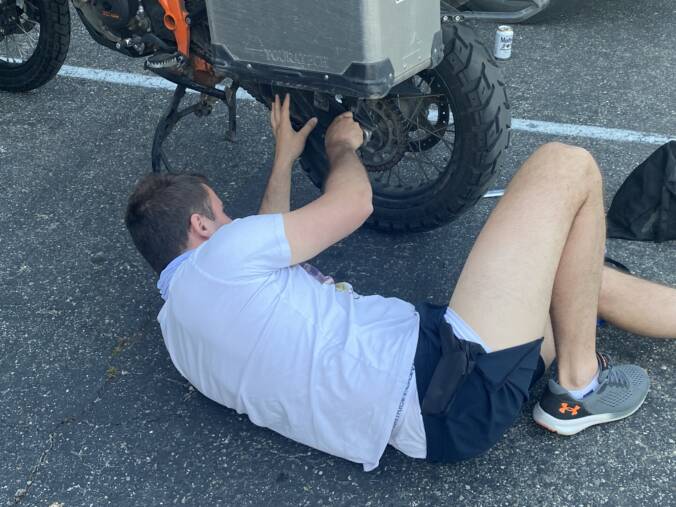 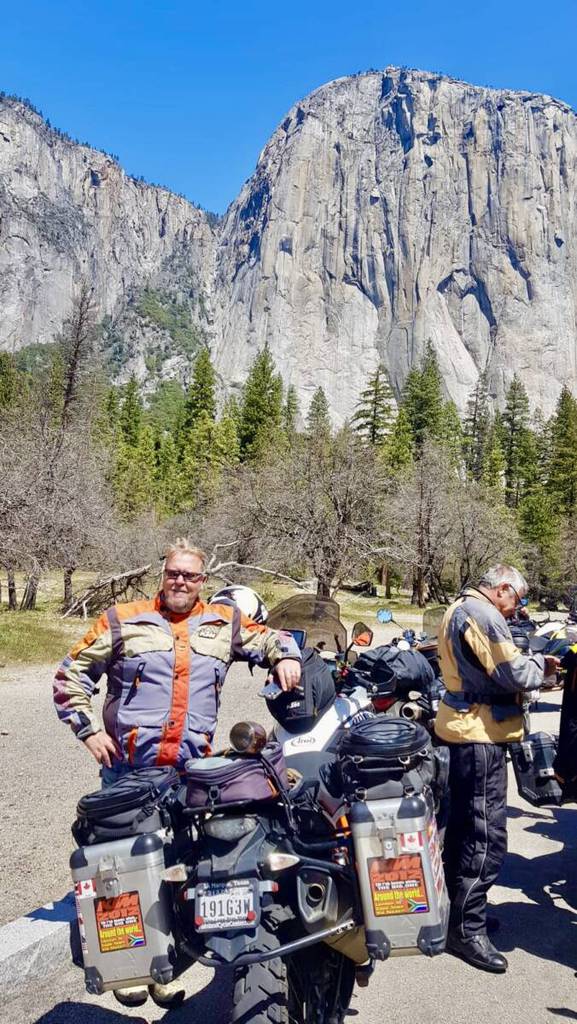