I said in Yesterdays Posting that everything instantly became easier as soon as we crossed the border, but this morning I can add that the beds have an actual mattress here, no more fighting over who gets the “soft bed” (chipboard mattresses we found were softer than the Mahogany mattresses.) It is easy ordering food as everyone speaks English, and the GPS’s are working again, 1st time since we left Russia !!!

The toilets just got better as well, see these Urinals, (in the garden.) 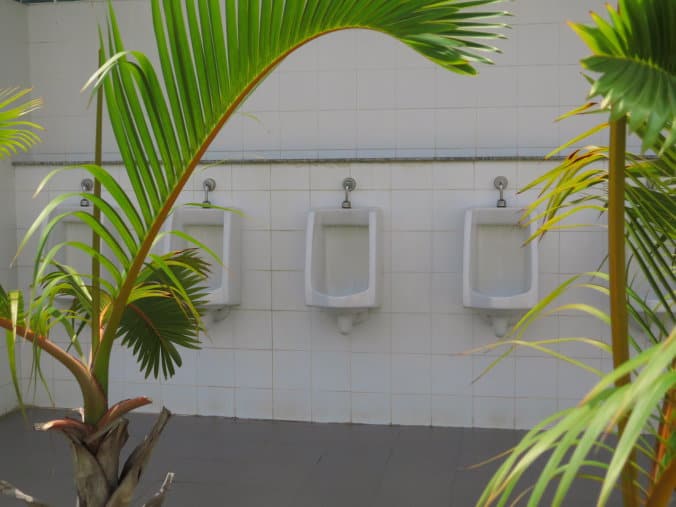 Last night we went to the local night-market to eat street food, I suggested to Pie to buy a few shirts and shorts as he brought two T-Shirts and a PT Short (and I hope a few underpants,) as his luggage for this trip consisted of two rims for his bike and a back-tyre, so he only had packing space inside his back tire. But here they don’t have cloths in real-men sizes, the cloths are made for the local men and XL is the same as our Medium, so no Mr. Fashion for Pie.

There were plenty of bugs for sale but we passed on this. 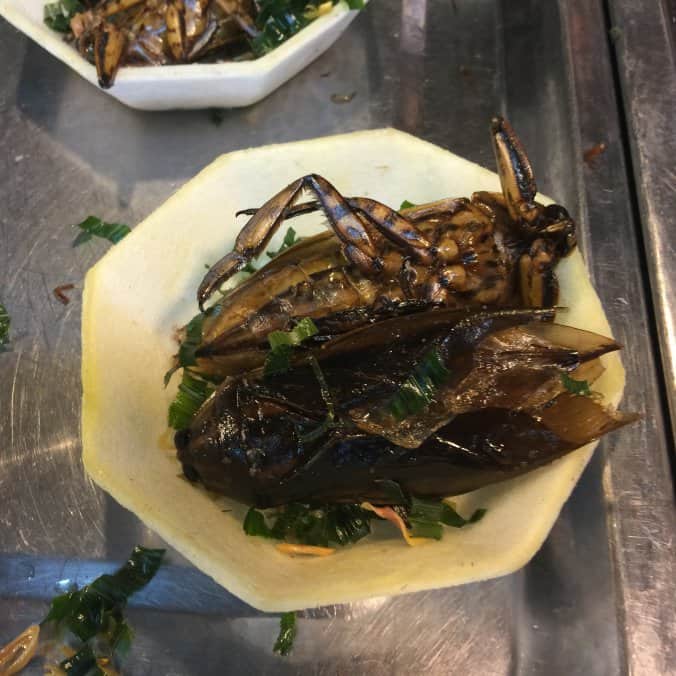 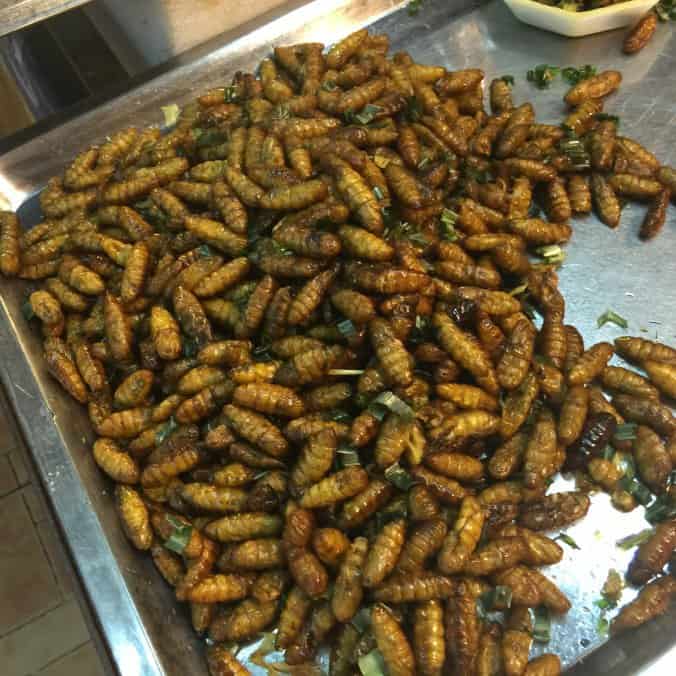 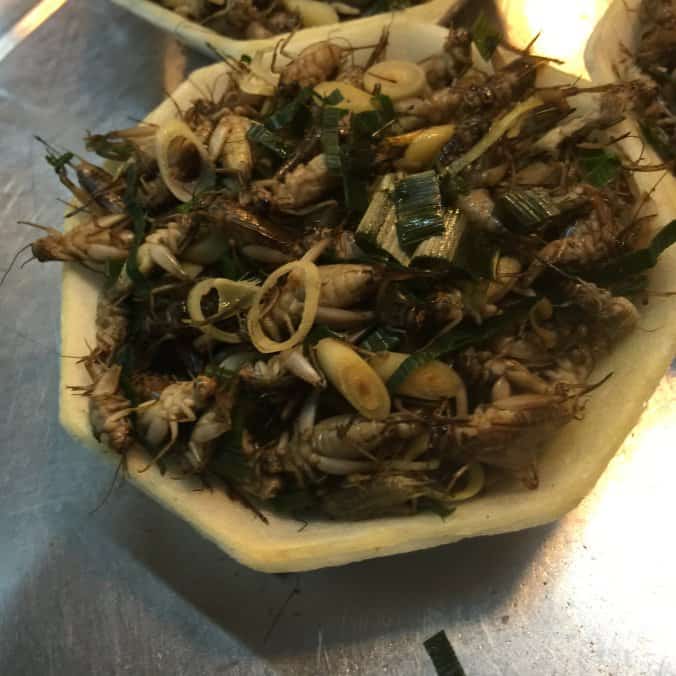 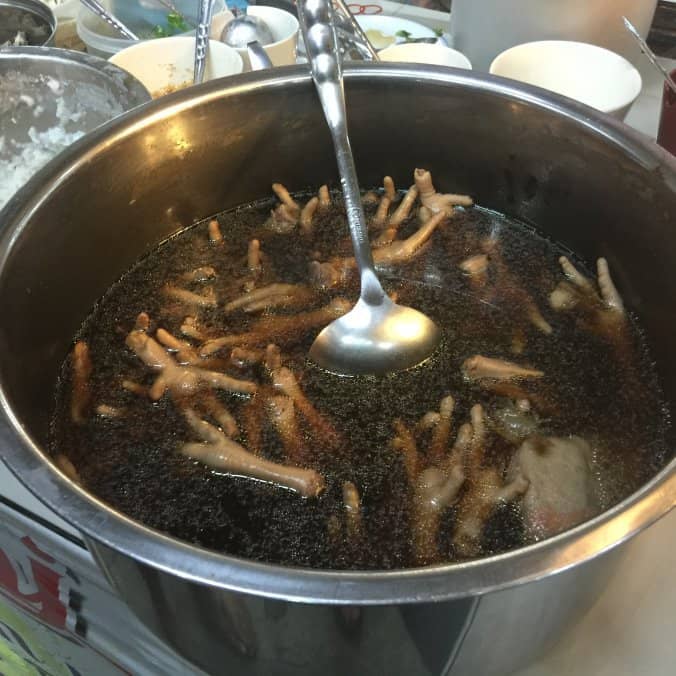 But we found some very nice food and the prices are so cheap, everything is now less than in Laos, even the hotel accommodation cost less here even thoughthe standard of the room is so much higher. 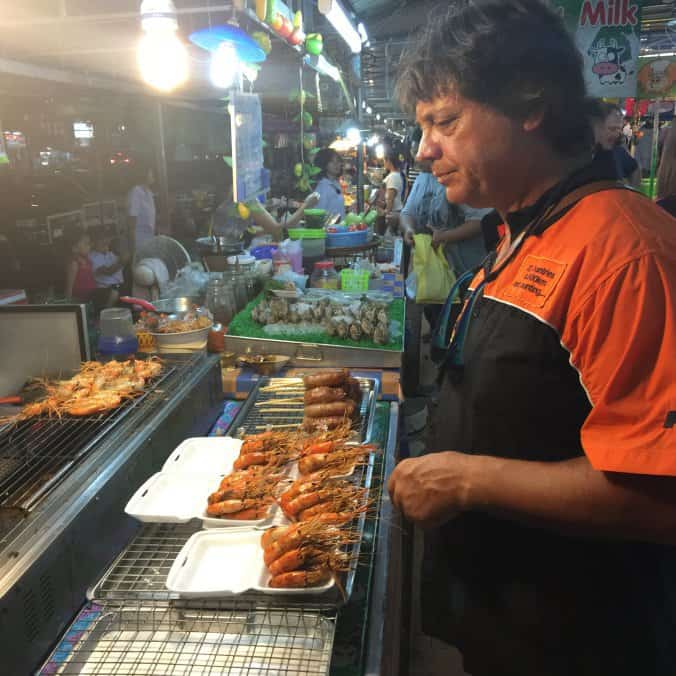 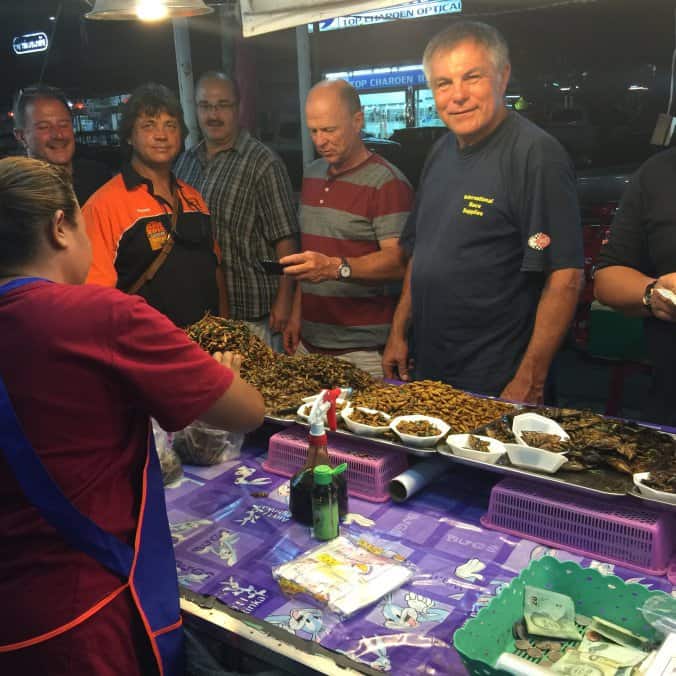 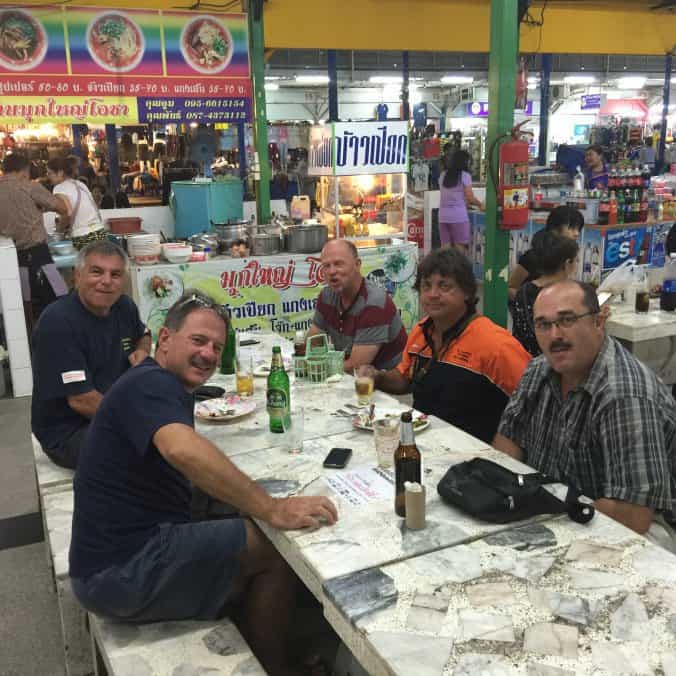 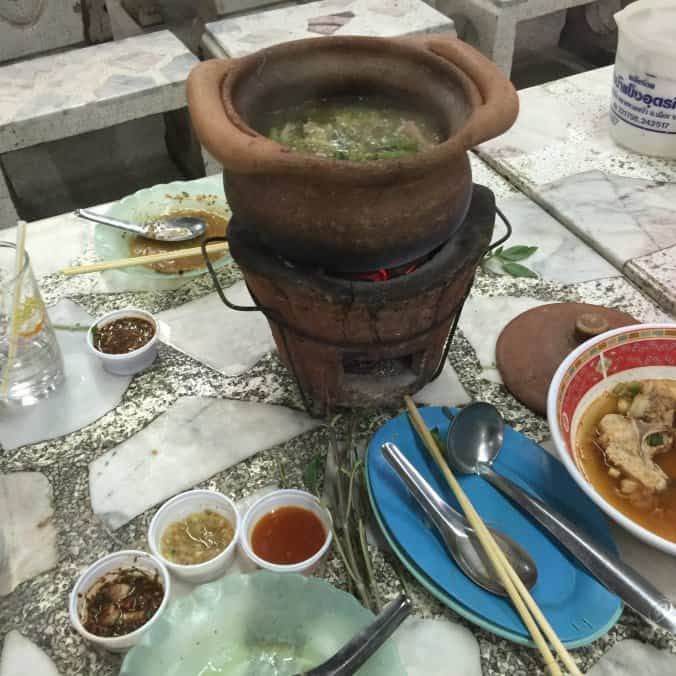 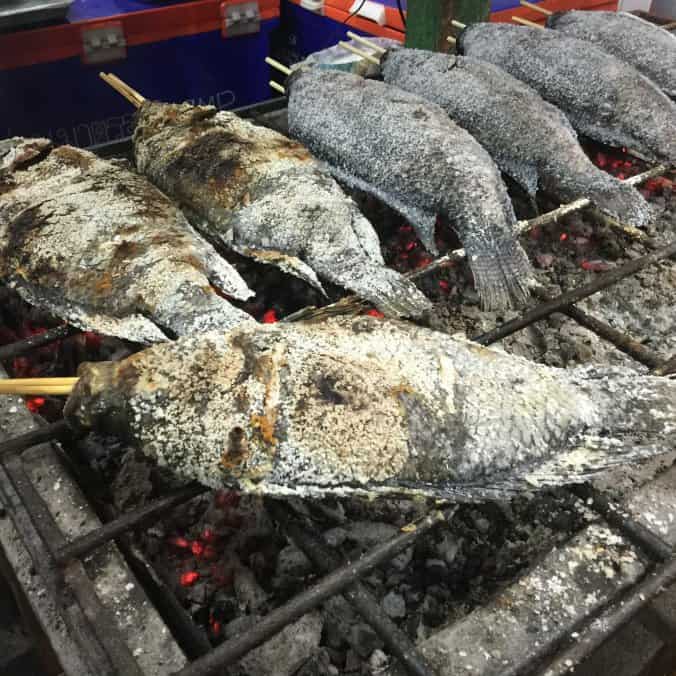 This morning we left the hotel at 7h00 as our hotel had no Breakfast option or a restaurant, but by 8h00 we were getting our daily shot of Noodles and Fried rice, with a cup of instant coffee, next to the side of the road, a perfect time to fix Peens’s panier that is playing-up after his fall in the mud in Bulgaria. 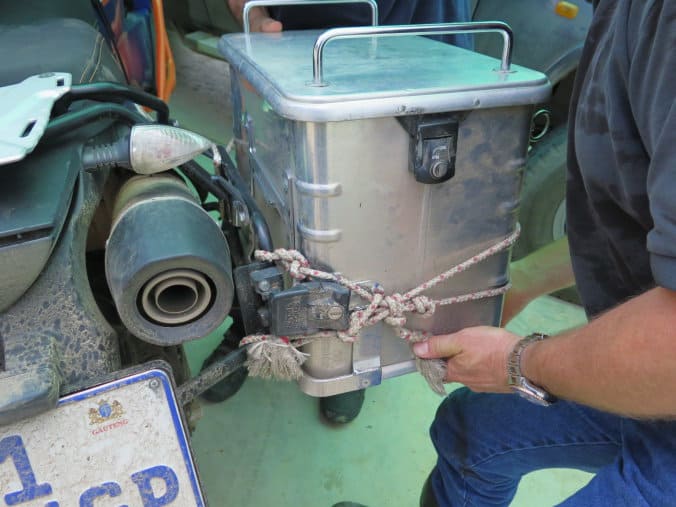 We had to fill the bikes from the tank in the bakkie as we once again used all our spare Kip, (the currency from Laos) to fill the bakkie’s 2 tanks with diesel and to fill the 200lt petrol tank for the bikes. This takes long, so during that time we discovered all our bikes oil-level were under the lowest point on the dipsticks, so a little maintenance took place. Even the problem with the fridge-plug was fixed. Note on the photo with Pie how he manages the heat by dropping his pants and then he wiggles around like that without even having any “skaam.” 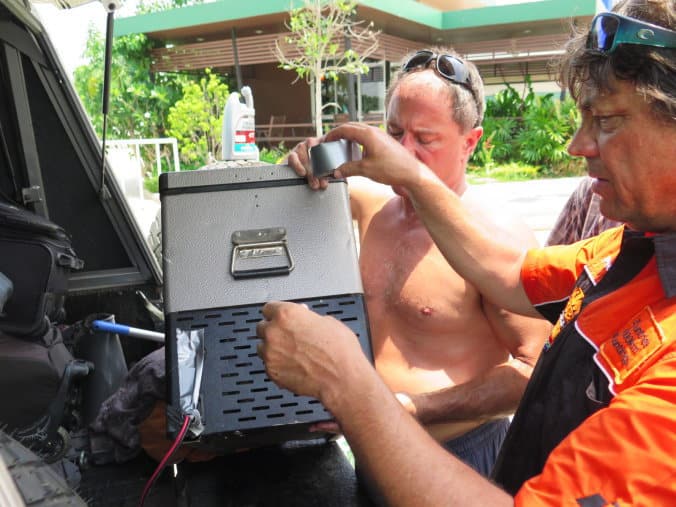 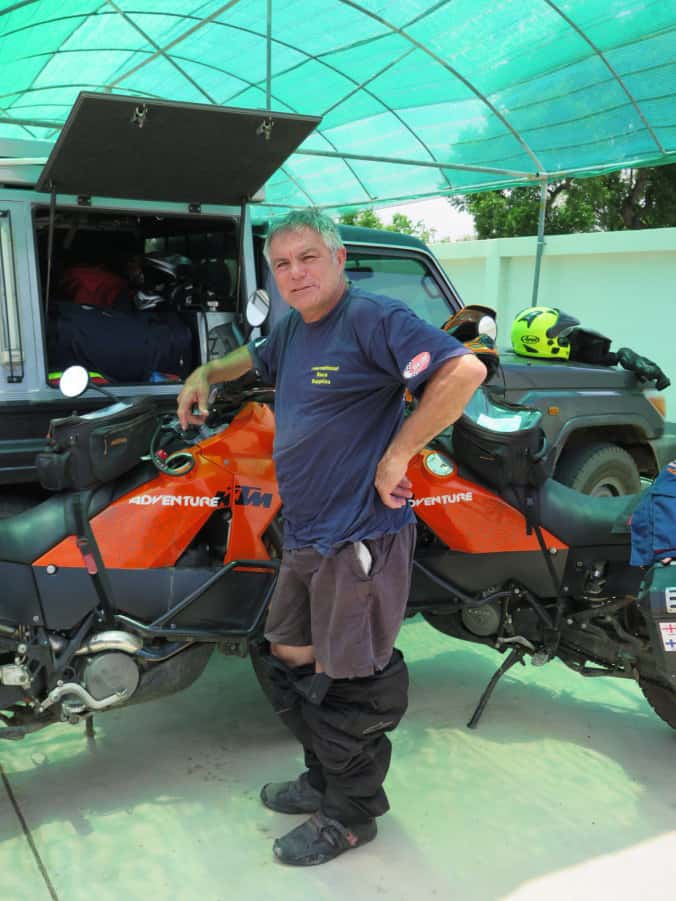 Some people has e-mailed me asking if I was really on this bike trip as they never saw me, so here I am fondling my gloves (they miraculously re-appeared this morning after vanishing yesterday.) Yes, the joking and pranks has not stopped and all are in very good spirits, even Hennie found a pair of slip-slops in his bed and every now-and then one discovered far too late that someone has turned on your heated-handlebar-grips, not fun in 42,5 degree heat. And often your heart skips a beat when your bike wont start, only to find that someone has switched-off your bikes Kill-Switch. 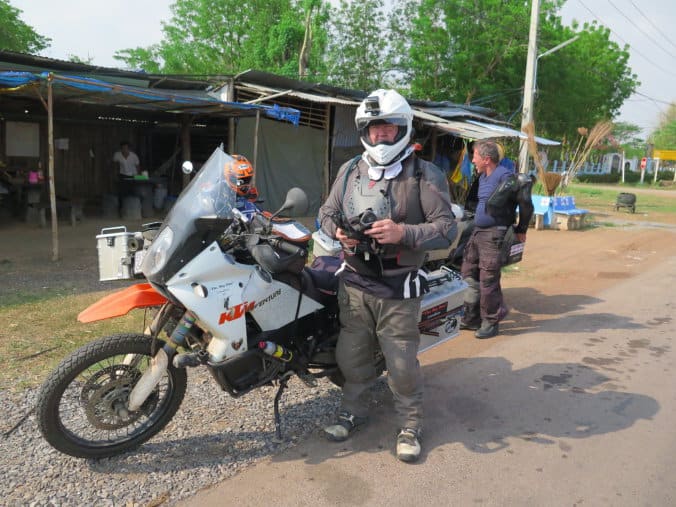 And here I am sitting amongst the local mothers and grandmothers eating an ice-cream. 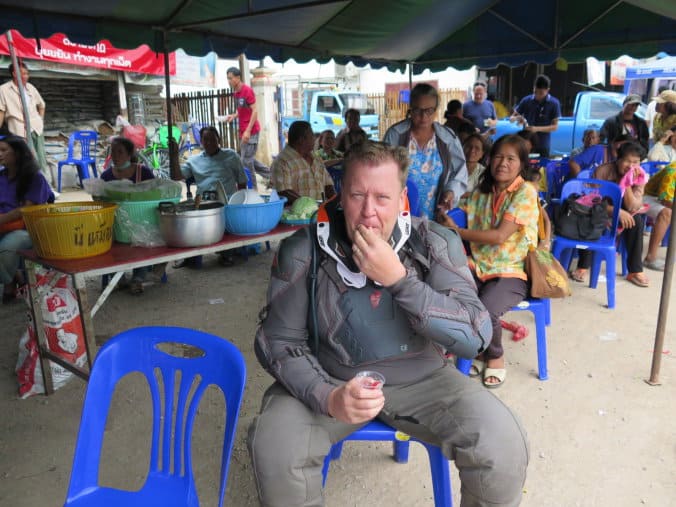 Today we stumbled onto a “show” or promotion where someone was singing and there were dancing girls and free ice-cream, (this caused a huge traffic-jam as it was happening right next to the road. 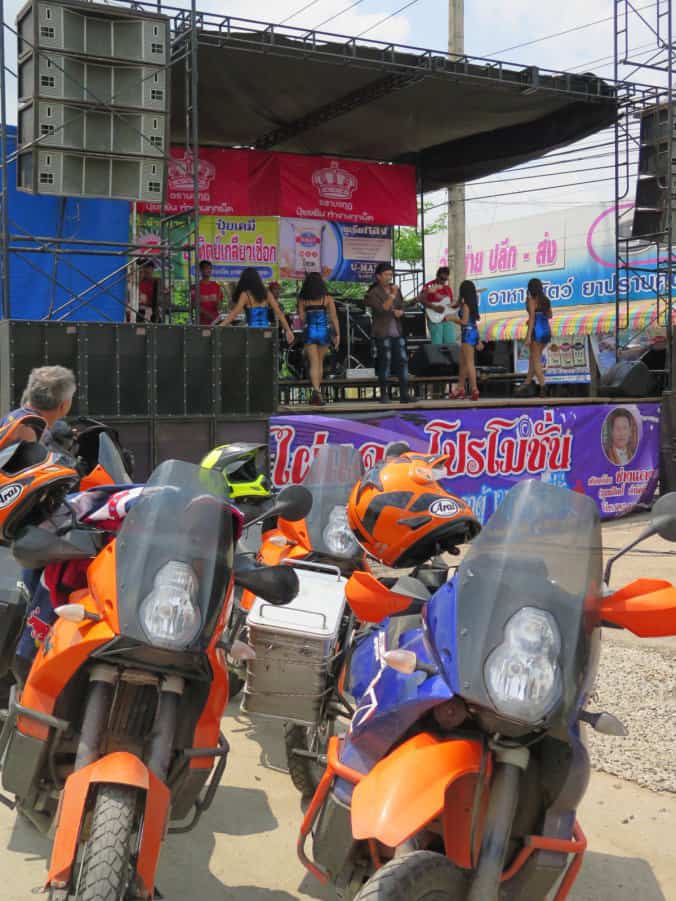 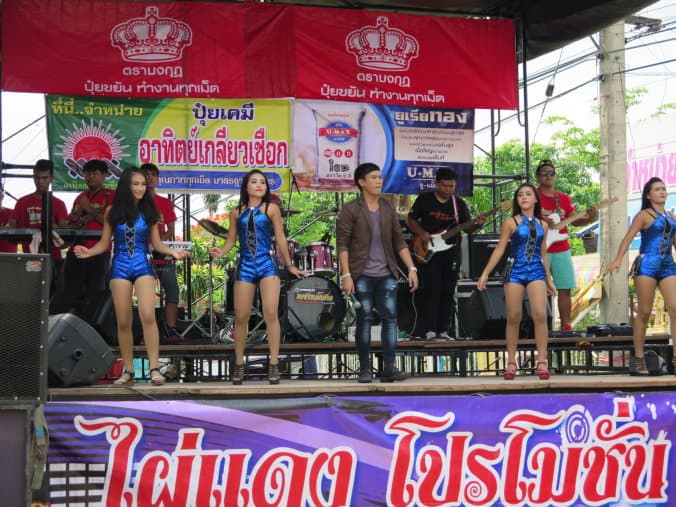 A local lady who has a company selling cattle-feed immediately spotted a promotional photo opportunity to promote her product and asked the handsome-attractive member of our bike-tour to stand next to her while her assistant filled and videoed us which no-doubt will make it onto the local Muis-Boek or Twitter to sell her product. 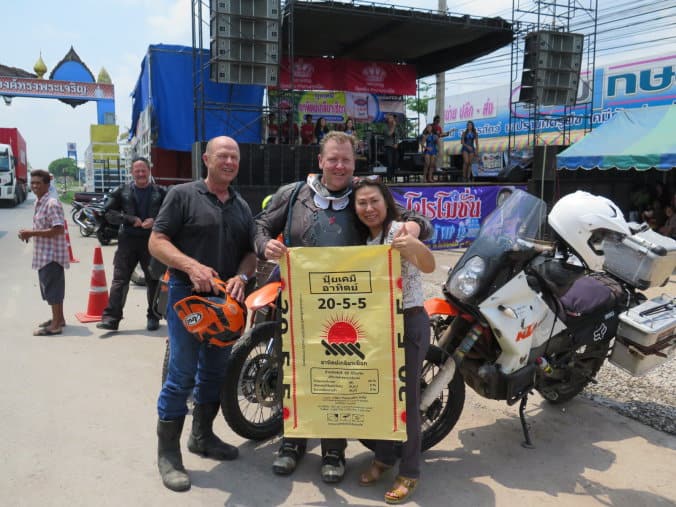 Tomorrow we have a very bad day ahead, we have to by-pass Bankok and that means getting on a hi-way and hoping the legendary traffic-jams of that area does not happen tomorrow.