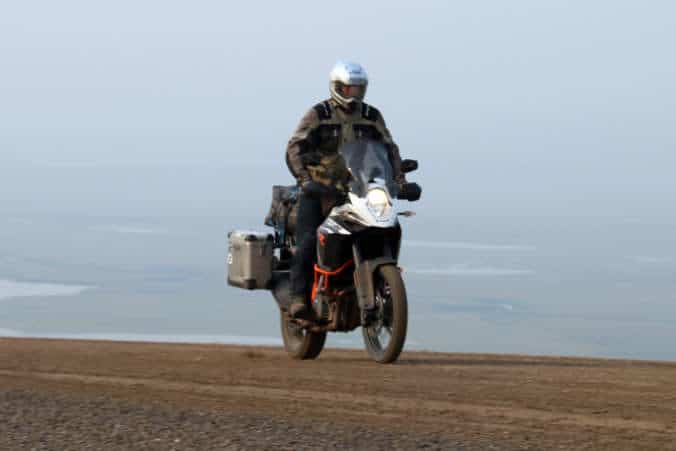 Yesterday I typed the Blog but could not get connected to the Internet although there was limited Wi-Fi, so I suspect my Laptop is not handling all the shaking too well as there is something wrong with its “Configuration” even though I have not touched anything. But after struggling for 1 hour this afternoon I managed to fix it, for now.

We had a nice evening last night, Clutch and his friends entertained us with some music and very interesting instruments. This is Clutch playing his Basin-Bass:

This is a local Miner who popped in to do a few songs, he came straight from the job and still had all the dust off the day on his face, but played like a pro musician.

There are about 15 Cabins in Wiseman and they are scattered all over the area in random positions, with only one road winding between them.

This morning we left at 7h00 and we had just under 400km to do today, and today it was all gravel, and the gravel slowly just got worse as we rode, some sections very dusty, which made it very difficult to pass trucks, and riding past trucks coming at us from the opposite direction. And remember how I said that luckily, we had no mud? Well, today that also changed and we got some, which definitely added a new challenge to test us.

We continued following the pipeline and knew we were getting close to a pump-station when the road became a tarred road, to prevent the dust at the pump-station, and then it was back to gravel. Luckily the gravel was good for most of the day but there were sections where there was a lot of lose gravel, making our bikes wiggle under us. But as the day progresses the surface became very corrugated, shaking and rattling us and the bikes until my teeth were ready to give-up and fall-out.

We crossed over the Brook Mountain range and climbed to 1500m, we had left the forest behind and there was hardly anything growing on the pass over, and when we dropped down on the other side we were in a Tundra, where there was no trees, only a little grass and a few bossies, it looks similar to The Karoo, and today the Mozzi’s were out in numbers, I could not take off my helmet and gloves when I stopped as there was just too many.

Everybody had to stop next to the road to refuel from their spare fuel, except Rocky and who managed to make it up to the “fuel station” on the last fumes in their tanks.

To call Dead Horse a town would be incorrect, it looks like one big Mine, an Industrial Site, with shipping containers and temporary housing everywhere, and rows and rows of equipment, Caterpillars, Cranes and many road construction machinery.

Our hotel is also a temporary type of structure and the rooms are small, with shared ablutions. All the food is served in a Canteen and is included in the Hotel’s price, so we immediately had some soup when we arrived as the temperature here at the Arctic Sea is only 8 degrees and we were very cold riding in the past 25 kilometers.

Peens and I have a little room, next to the toilets and showers.

The “town” of Dead Horse is also an alcohol-free zone, it’s a working town, so no drinking can be allowed, as a result, there are no Pubs or Bottle stores.

Tomorrow we take a bus ride to the actual sea and then after only 15 minutes at the sea we drive back the 45 minutes to Dead Horse before we turn the bikes around and head back to Wiseman.

The wi-fi is very slow, so in future I will send more photos of Dead Horse.

Tomorrow we turn around and head South again, sleeping in Wiseman again, where we had no wi-fi last night, so there will be no blog unless the wi-fi is better until we are back in Fairbanks on Friday evening.