We knew that China was not going to be easy, we knew we were not doing it for fun, we knew the Touring Tourist stopped at the border with Mongolia and will begin once again as we enter Laos, China is a country in between the fun countries and there is no other way but to bite the bullet and ride across it, moaning and groaning and fighting along each day. But not in my wildest dreams did I think it would be this hard, and ugly, and dirty and so Industrial, Non-Stop Industrial !!

There are no other tourist this stupid as our group, so no one comes here and no one has seen one before. It is very similar as when you ride through Lesotho on a 4×4 track and meet local people, I remember on one trip how the person just could not stop staring at my riding buddies boots, never seen something that ugly and uncomfortable. Well China is the same.

Today started off late as some of us wanted to ride through the old city and we had a late night, but we also did not sleep much, or should I rephrase, some of us had rooms facing the car-park (me) and the noise was disturbingly inconsiderate. I knew it was Valentines Day in China yesterday as Tony told us about the Chinese Valentines Day, but when got out of bed at 5h00 to shout at the person playing his cars music so loud I was shocked to see the entire carpark has been transformed for some TV Live broadcast for the Valentines weekend and what had kept me awake was the building of the stage, setting up the sound equipment, and yes the 5h00 Sound Check !! 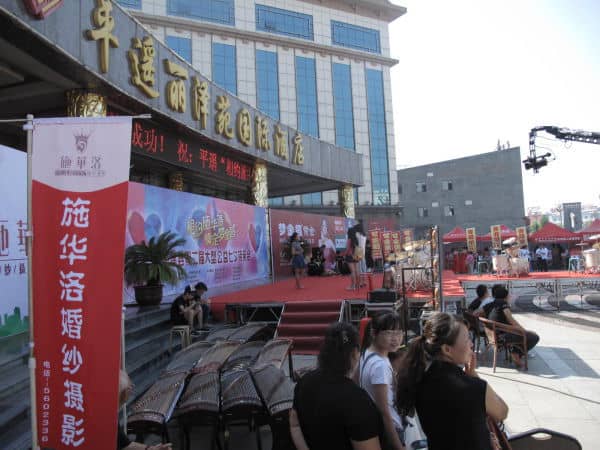 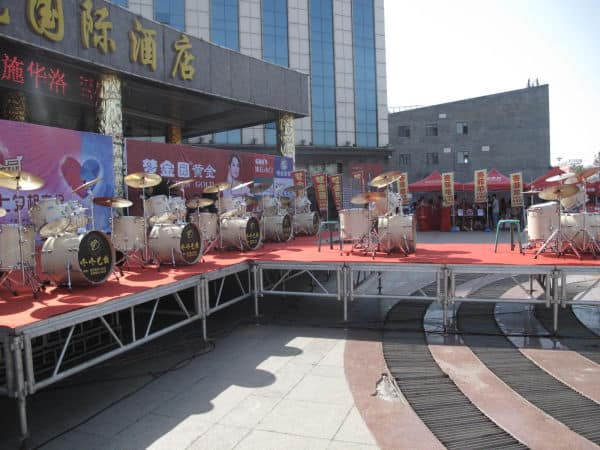 Yes, that is my hotel room window, second from the right on the 1st floor.

We left and hit the road, it was the same as yesterday, still on Mainreef road (minus the traffic lights) and speed limit of 80 which in my opinion is far to fast for a road where any vehicle, regardless of its size, can simply “merge” into the flow of traffic without any road sign telling them it is safe to do so, you would just have passed a truck laden with coal, brakes steaming from coming downhill, when mother Chang with two babies haning on for dear life “hits a gap” right in front of you as she know you will slow down to avoid an accident, but did mother from hell ever consider that there is a over laden truck with hissing brakes behind me which cant slow down as fast as I can?

Here is some photos taken along the road today. 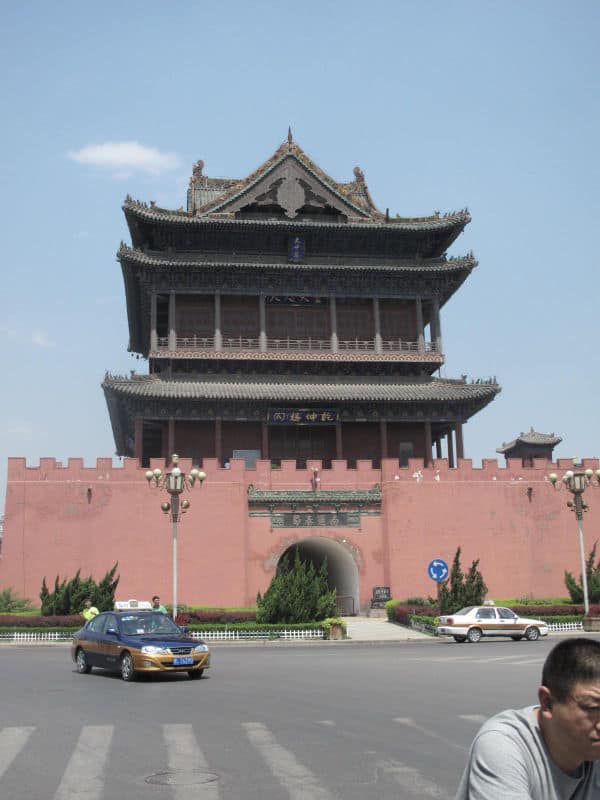 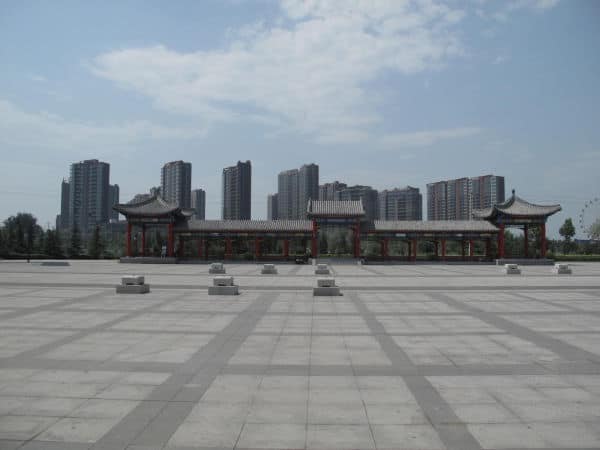 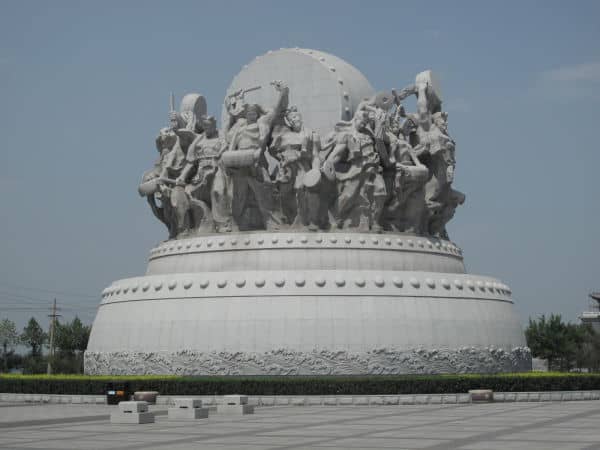 And then we found the place where all the trucks were on their way to : the biggest industrial site I have ever seen and could never have thought exists.  The 1st thing that changed was that all the trucks turned off the road, (more than 75% of the vehicles, including scooters, tuk-tuks, buses, everything you can think of on the road are trucks,) I was happy to see them go and all of a sudden I felt I could stomach the rest of this trip. Then the hand full of vehicles left on the road started going downhill and we ended up at the Yellow River, a huge and powerful river flowing fast and wide, and no, the Chinese did not preserve the environment around the river or the fauna and flora as we would, no, stuff the Greenies and the Bunny Huggers, they built the biggest industrial area I have ever seen. See from the photo below how small the bridge is, gives you an idea, no trucks need to cross the bridge, everything gets delivered at the plants around the river. 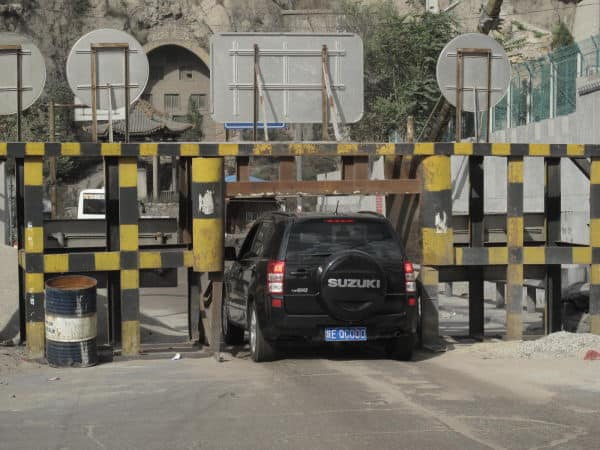 The following photos should be viewed as a panorama photo, I just cant post it, but it starts from the right and goes towards the left and is only a 180 degree view of what ai could photograph but is only about a third of what is happening in that valley. Note the sites out of focus (from the dust and smoke) in the background of the photos. 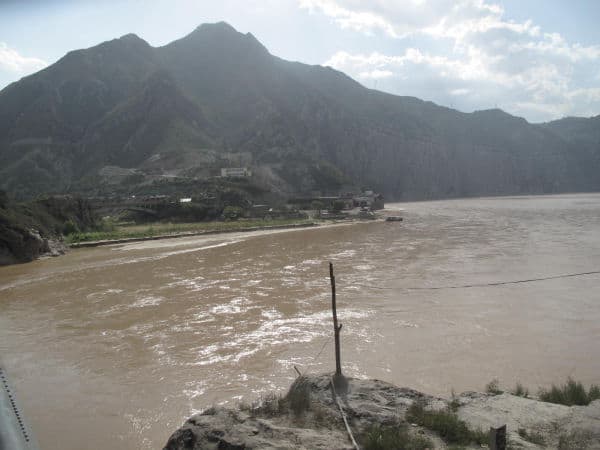 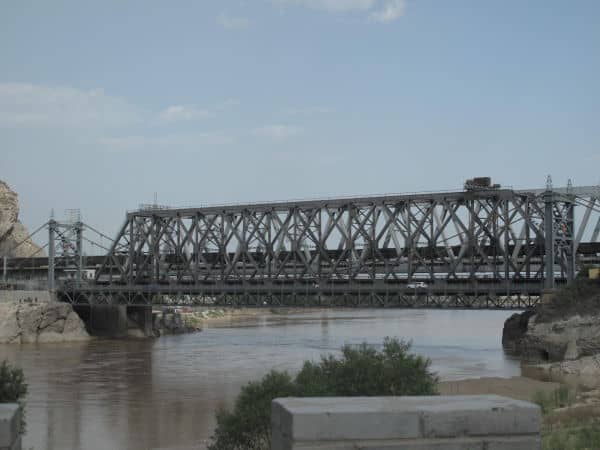 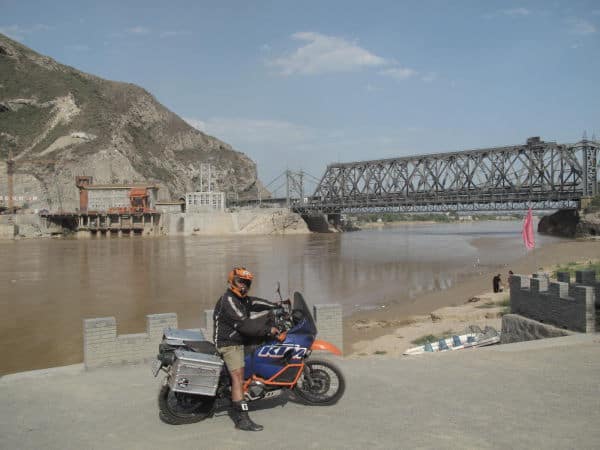 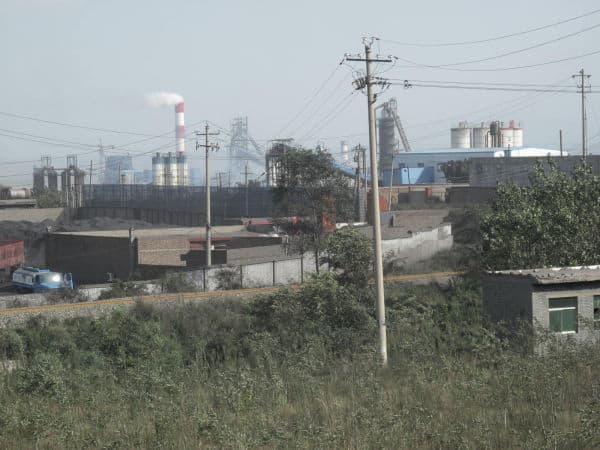 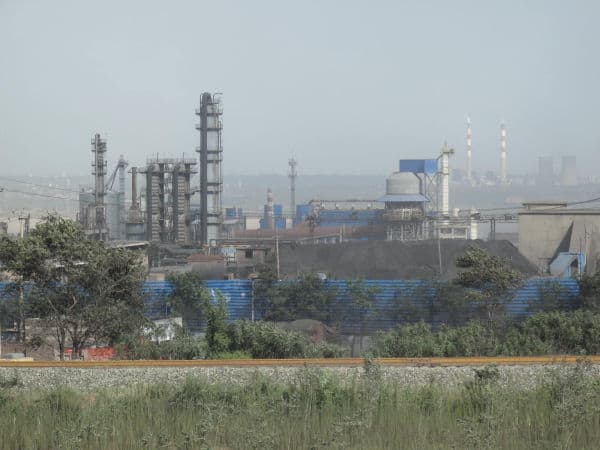 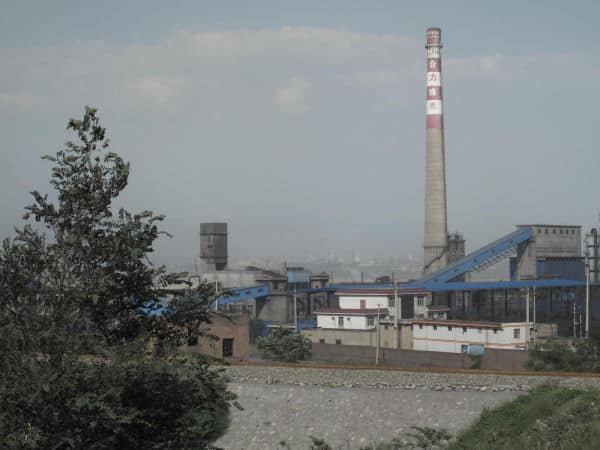 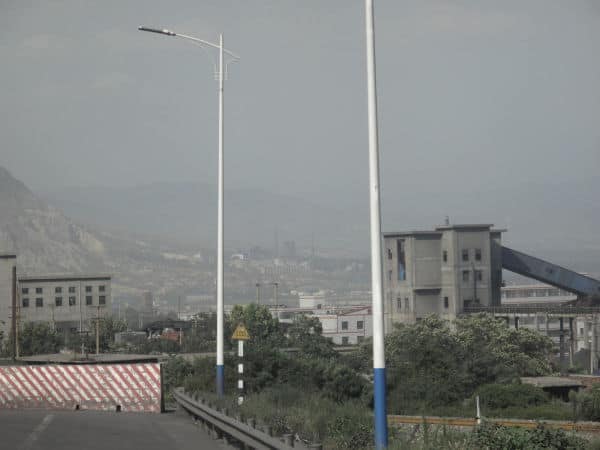 The photos does not show the industrial sites on the oher side of the mountain or what we still had to ride past. It is too dangerous to stop here as there are now other type of trucks leaving this area full of the products that were made, but it just continue as far as you ride. If you took Secunda and put that next to Iscor, and then added Mos-Gas next to that, and then added  AECI, and added the SASOL Plant and then three power stations (that opened on time,)  and then doubled it (don’t double the power-stations, there are only three of then,) and then you will grasp the size of what I am talking about.

But what makes this special is the little small individual interaction with the ordinary people. At the fuel stops which are very controlled and regulated, (a bike may not be filled from a pump, the fuel is decanter in advance into watering cans or ‘Gieter” in Afrikaans, and then the bikes (scooters) parked  in the corner and you buy one “bucket” at a time. But when the lady had to get the 3rd bucket of fuel her friend walked over to take a photo of this and then Peens sneaked a kiss on her cheek and all of a sudden we could fill from the pump, (note their convenience store standing in the 34 degree heat on the forecourt, (the concept of a quick-shop at a fuel station is unheard of, what a pity, drinking Luke-warm water from your tank bag is not fun anymore. 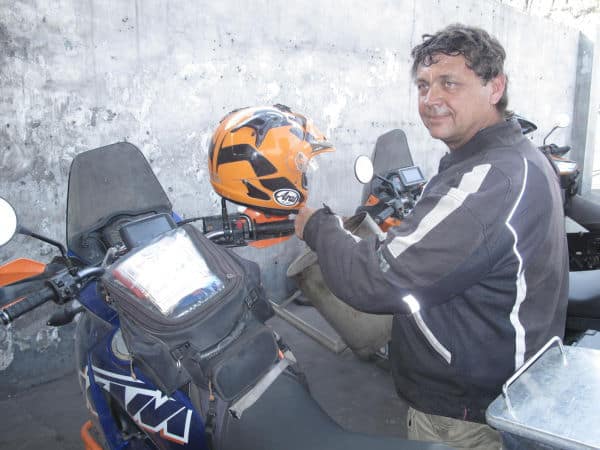 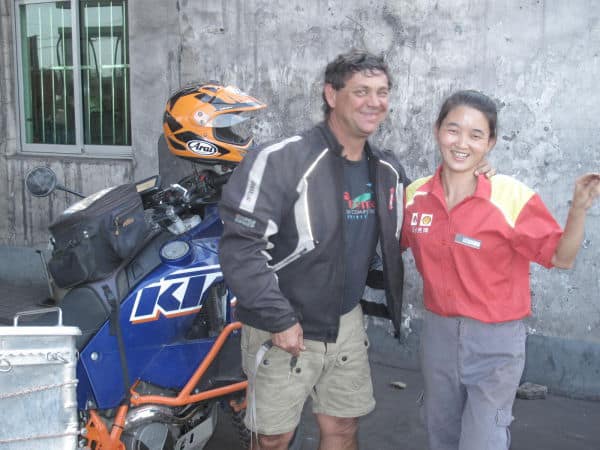 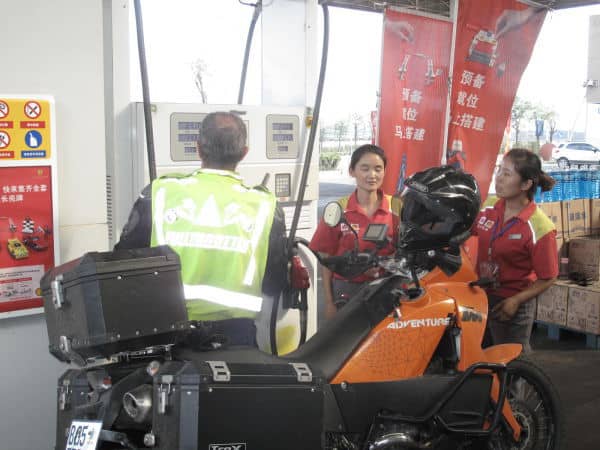 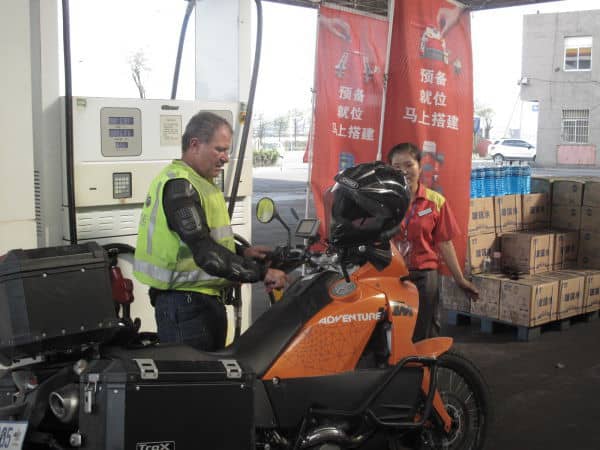 But we made it to the hotel, has a shower and went in search on the loud music coming from the square (yes you guessed it, from across my room window,) and we strolled like Sartjie Baartman across the square, past the basketball courts packed with kids playing, past the new-mothers with the strollers, past the old-men sitting on the lawn playing some ancient card game, past the little food-stands, and then we found the people making the noise, the mothers and grannies, they march to very loud music and get all ladies from the people to join-in, sort of like aerobics. 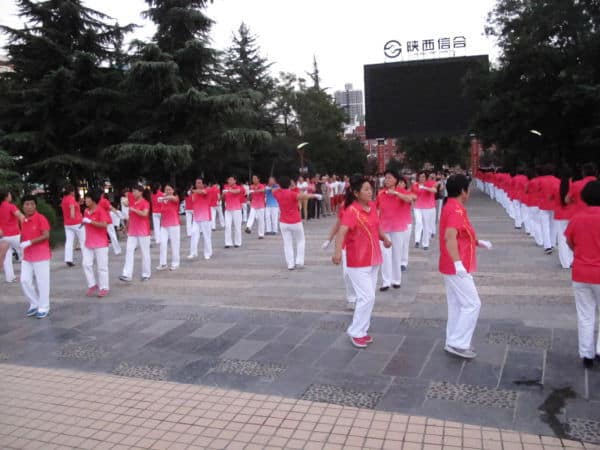 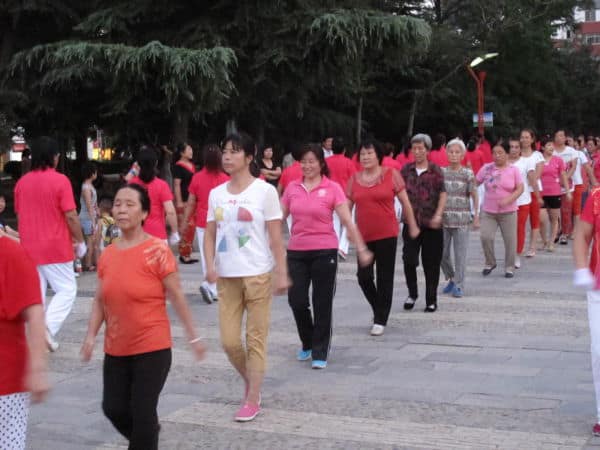 Then we found a small little back road where the families were eating supper in the front of their little shops (they sleep in the back) and we found a Noodle-Shop, carried the tables outside and by pointing at dishes on the wall, ordered a meal, which cost R130-00 for 5 guys and it included three beers. Pie went next door to have a shave and I joined him for a haircut. The lady charged us only R20-00 each. But then the local kids heard the Freak-Show was in town and soon mothers were bringing their babies for us to hold so that the mothers could take photos of the terrified babies sitting on the laps of “Old Round Eyes.” 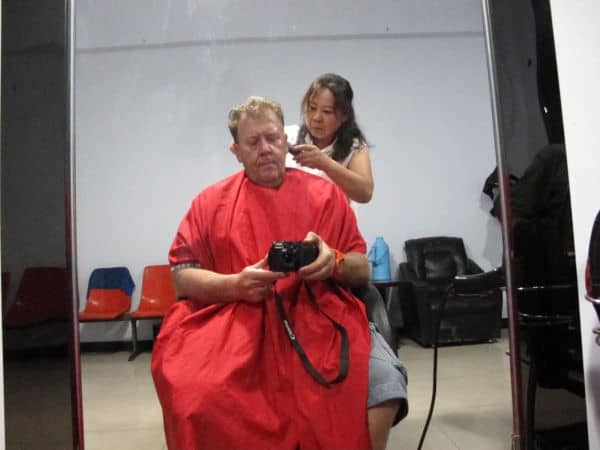 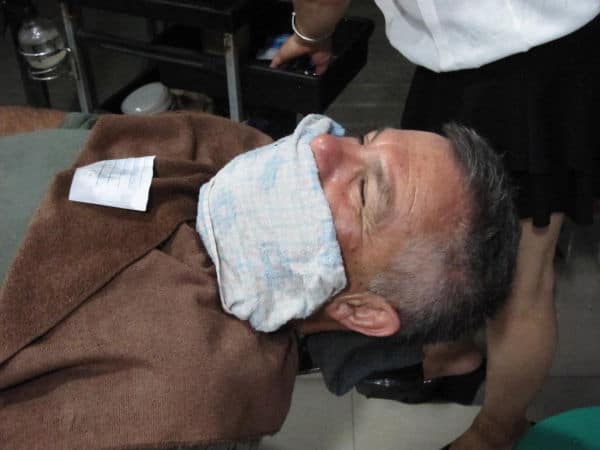 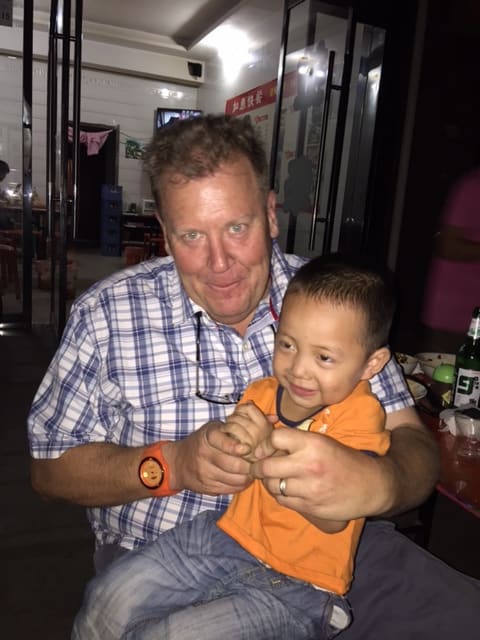 After dinner I left to come and do this Blog and Peens made the evening of one little family when he walked in during their dinner and challenged the brother for a game of Pool, winner gets the sister, but that was lost in translation and I am so glad I am not going to be there when Peens wins and try to claim his prize. 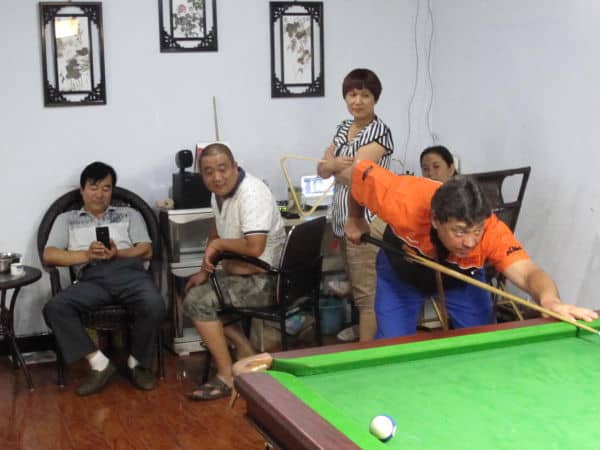