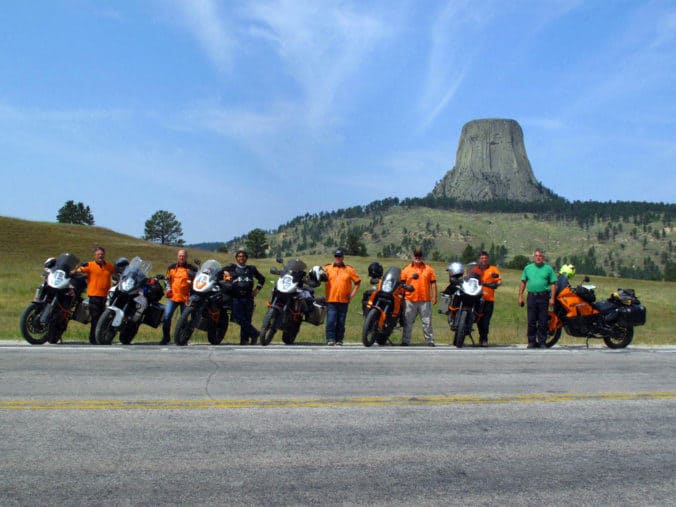 Yesterday we went to our motel around 15h00 for some of us to do the Blog, others to do the washing and some to talk nonsens to all out Harley Neighbours. Even I was enspired when I saw how “old” some of them were, I guess over 70, and the couple started cleaning and polishing their Trike after they had their afternoon nap. I also noticed that the average age of the bikers we met were over 60, and firstly it is an affordability issue as a Harley costs R250 000-00 or more, but mainly I think it is a time\leave issue and most young Harley owners dont have the time to travel so far.

We took the Nemo road towards Sturgis around 17h00 (remember it gets dark only after 21h00) but went to look at what was happening at two “pop-up” Bars\Restaurants. At the 1st one we found a Bikers Wedding about to start and I invited myself to be their Wedding Photographer;

The Groom is wearing his Undertaker’s Hat and is surrounded by the Best Men ????? 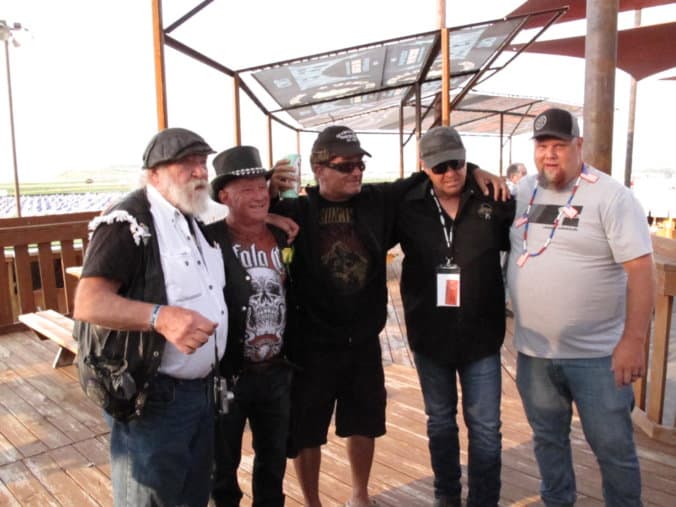 For Decor there was a burnt-out bike. 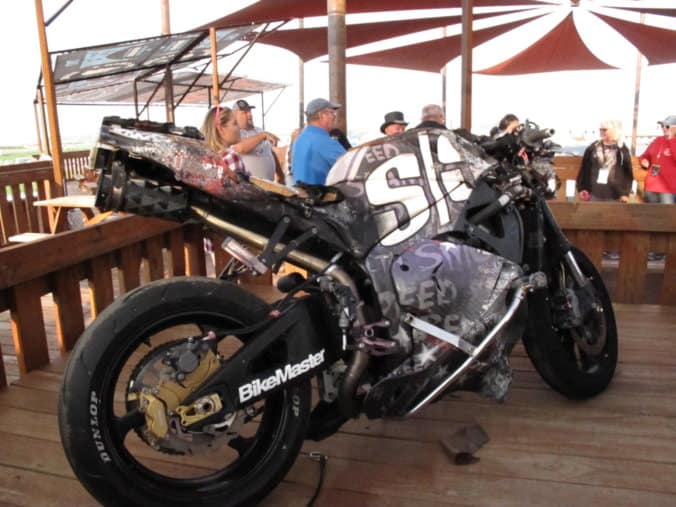 The Bride (not worthy of a white dress I guess,) was given away by several men. These two were part of the wedding. 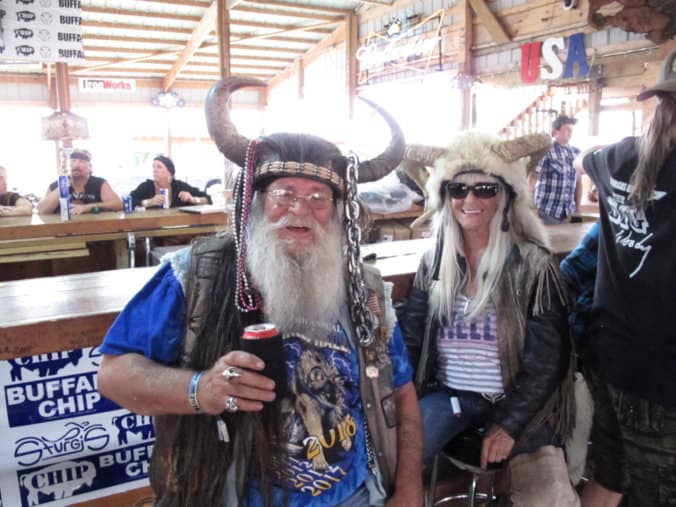 And here is the Service. Note the three men that gave her away and the dude in the blue shirt with the I-Pad did the Wedding. 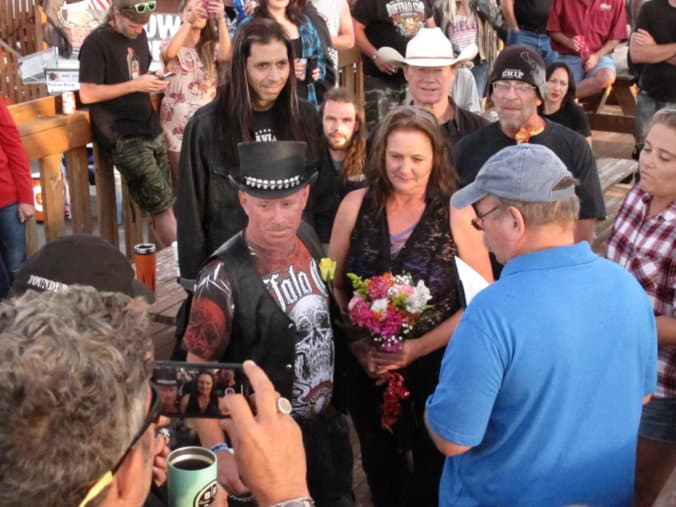 Then I wanted to stay for the Reception and free drinks but there was none, so we rode 7 miles to the next place, on a farmers farm, in is barn, open only for the 10 days of Sturgis, (I suspect it is his Man Cave and his friends must think he is cool.)

It has a very industial feel and full of old steel-works machines, plus cars and metal “Art-work.) There was even a Blacksmith forging some steel for the knofes he makes. 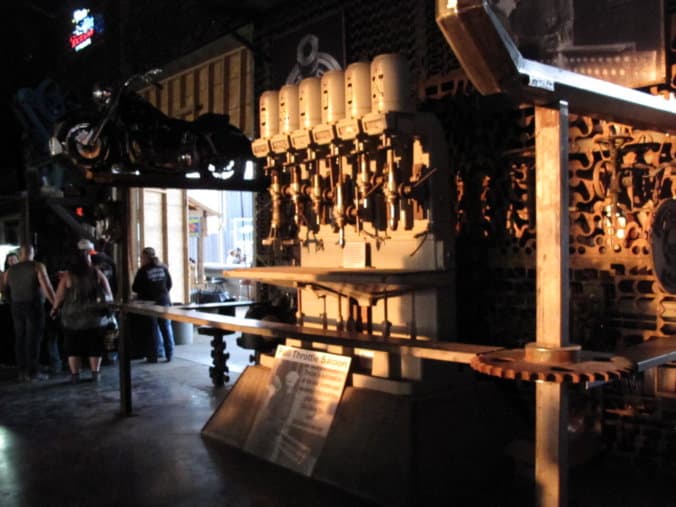 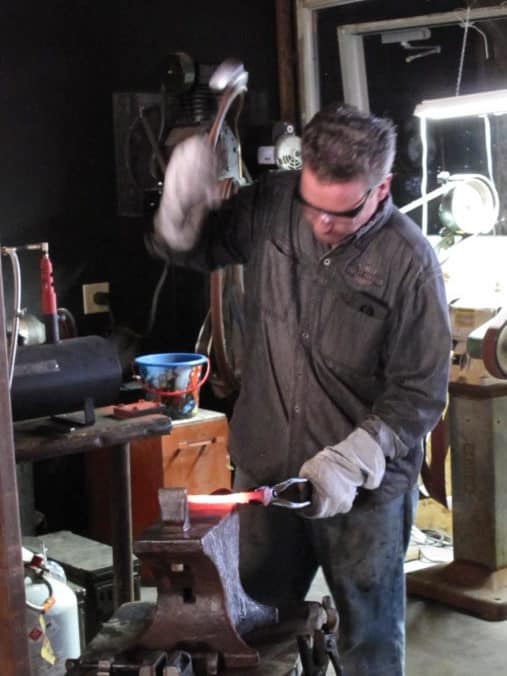 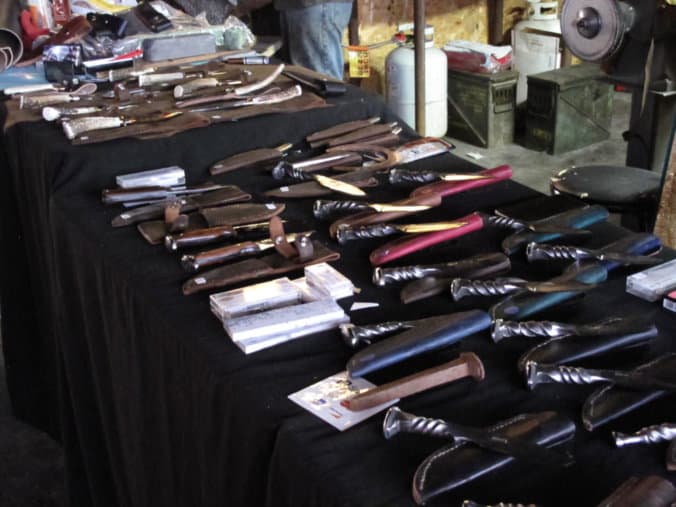 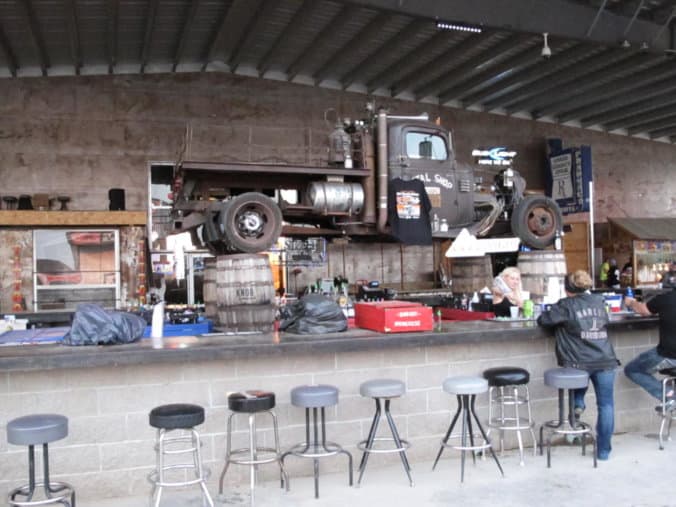 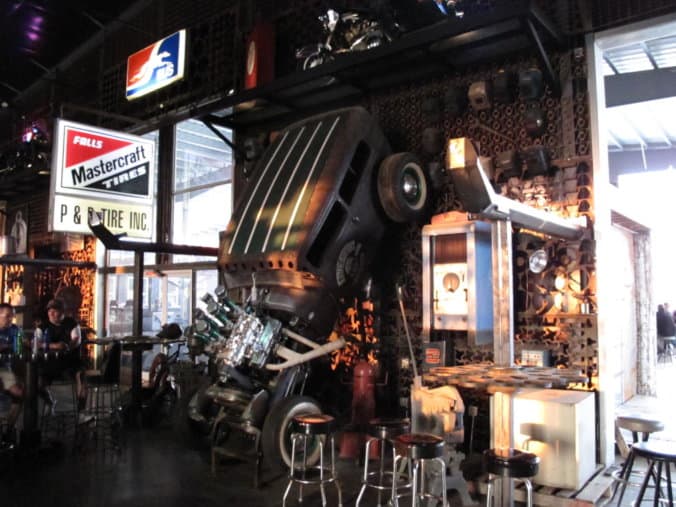 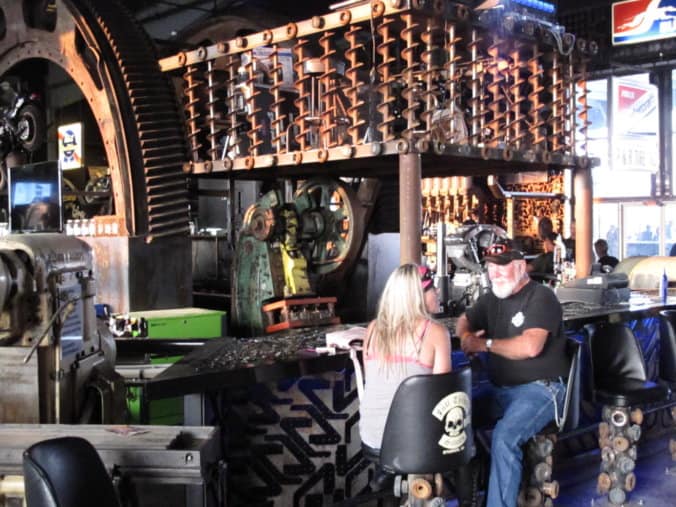 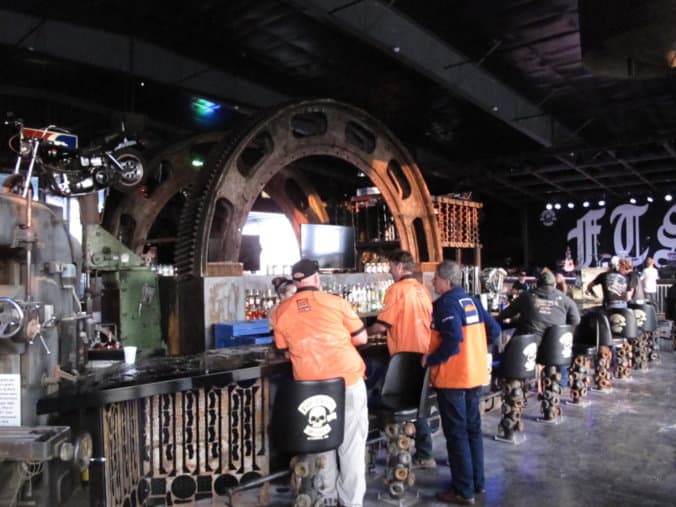 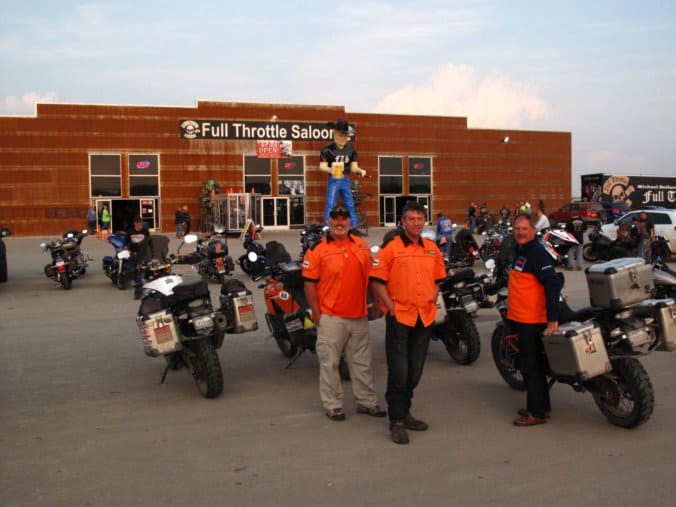 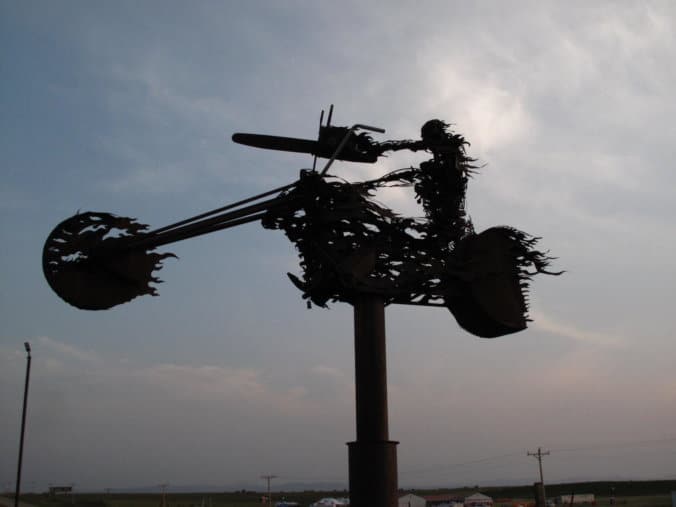 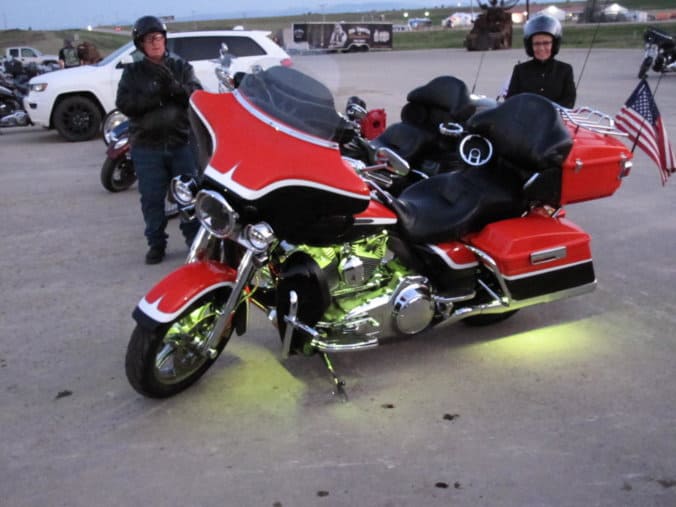 This morning we had another 7h00 start and took another little road out, (with Sturgis officially starting tomorrow, we had a stream of Harleys from the front the whole day, we missed this event by one day and I dont regret it for a minute.) We first went to the town called Dead Wood, a real Cowboy town and I took some great video from my helmet camera riding down Main Street past all the little Saloons, Baber Shop, Bank, Supplies Store, Canteen etc. (I also took some great video in Sturgis’s main street and of some of the great rides we had, so I will have to make another Video to post with some nice music to go with it.) This area is famous from where all the Cowboy stories we know from the movies played-off. It was in the days of Gun Slingers, (fast guns) fast horses, questionable woman cheap liquor and even faster money. 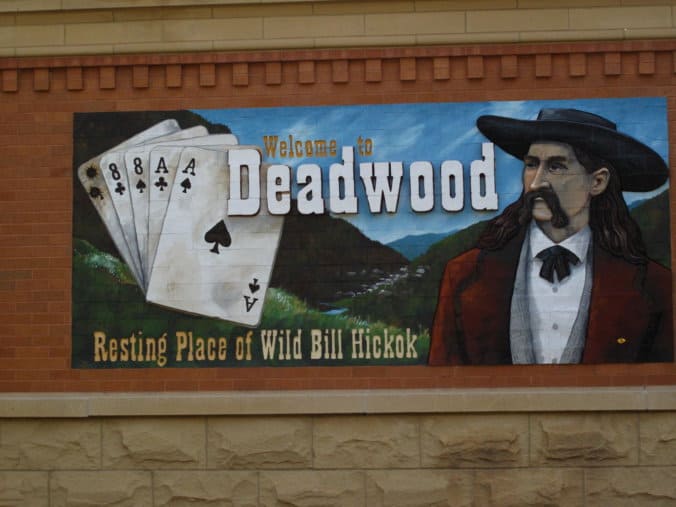 Then we rode Spearish Canyon road, wow, amazing, all along the river, hundreds of bikes comiung from the front. Every place you stop for coffee or fuel or the toilet there was something on display. I mention the toilet, well today was difficult from a riding point of view because we just were not in sync with our fuel tanks filled yesterday at different times, so the groups had different levels of fuel, and our bladders and bowels were also just out of sync. Very frustrating in 34,5 degree heat wearing riding gear. 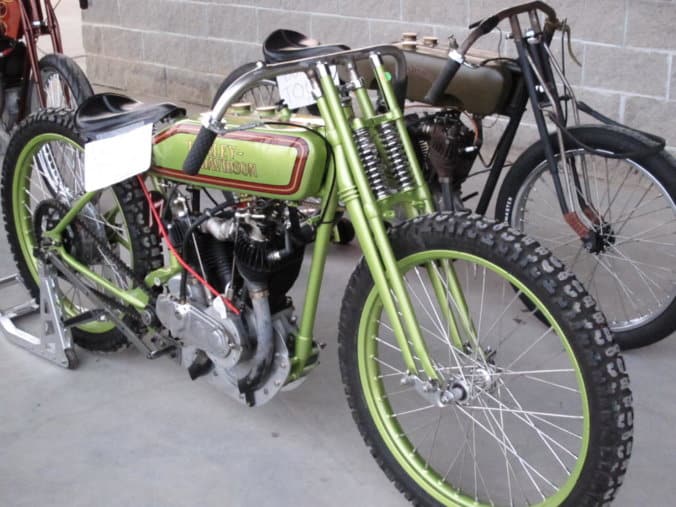 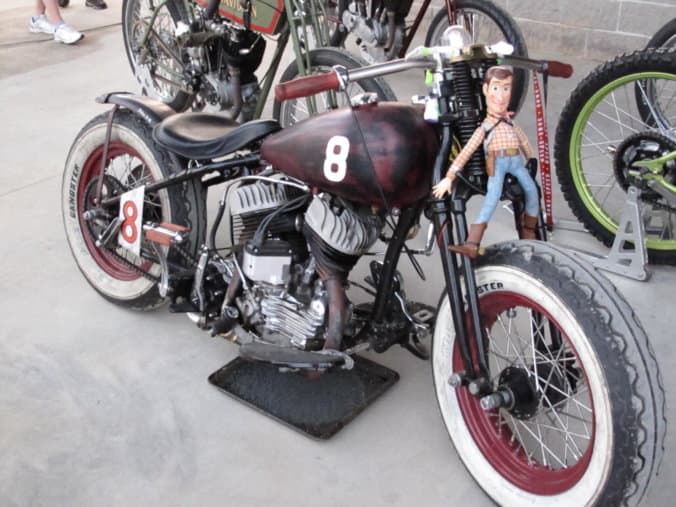 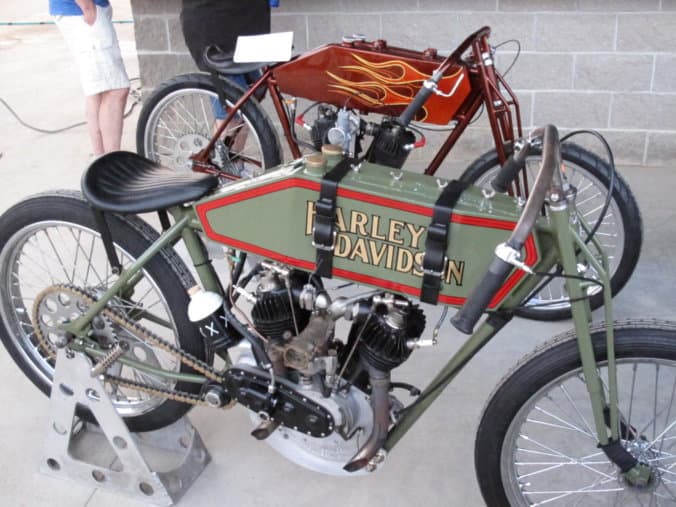 Today Dog pointed out to me that all the little signs next to the road saying “Why Die” or “X Marks The Spot” or “Think” was where people had died in motorbike accidents. This shook me as there were many such signs, almost all the tricky corners where I went into too fast and had to brake in the corner or had to make a correction in the corner there was a sign. That made me wonder, how many of those lives lost could have been saved if they just wore a helmet. But look on the bright side, no beatles went into any eyes.

For lunch we stopped near The Devils Tower, a huge rock in the middle of nowhere. 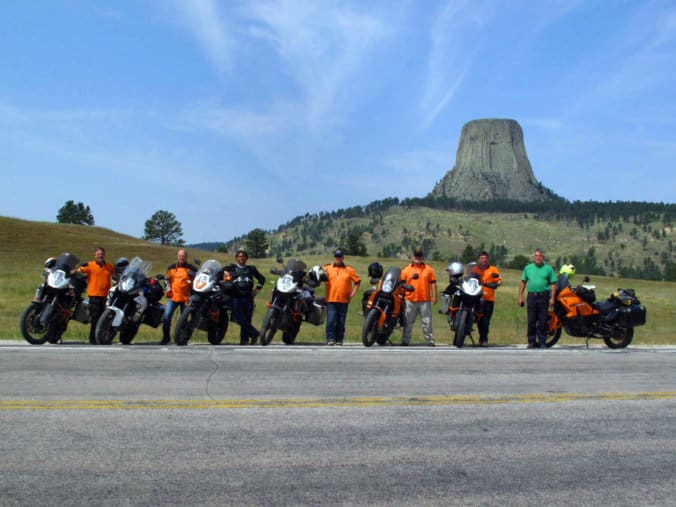 At the lunch spot the band was playing (as they were paid to do) to only 20 people. The lady singing hinted for a beer and said ” I will have to train my dog to fetch me a beer.” And then our dog brought 4 beers for the band, and as they saw him approaching they laughed so hard they could not continuethe song. 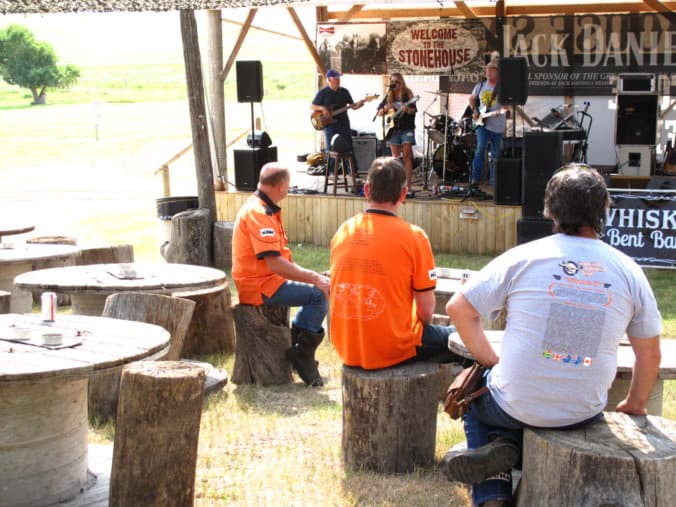 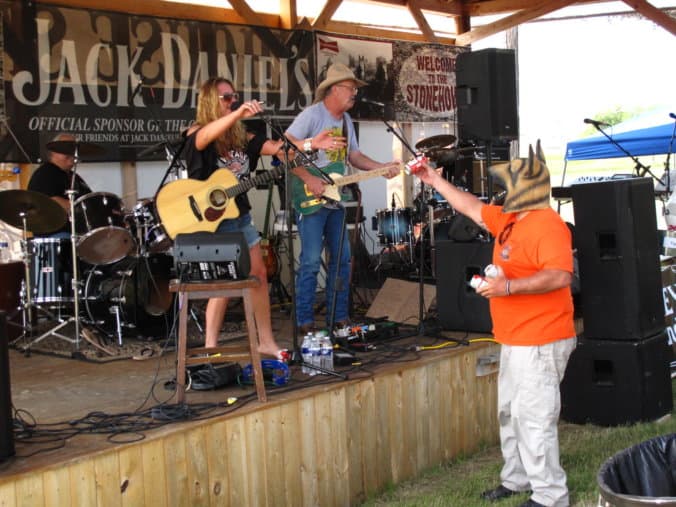 The ride after lunch was interesting as the landscape had changed from the Black Hills to what I can only describe as The Karoo, but with hills. But after a sooner turn-off after meeting a lovely couple from Canada, also touring, but on Sport Bikes, we rode into a canoyn and began to climb up to 2994m, and the temperature dropped from 34 degrees to 18 degrees in minutes. The scenery reminded me of the Cowboy Movies and I could imagine the Indians peeking over the top of these cliffs any minute, or, to ride into an ambush as we were between two cliffs for many kilometers. 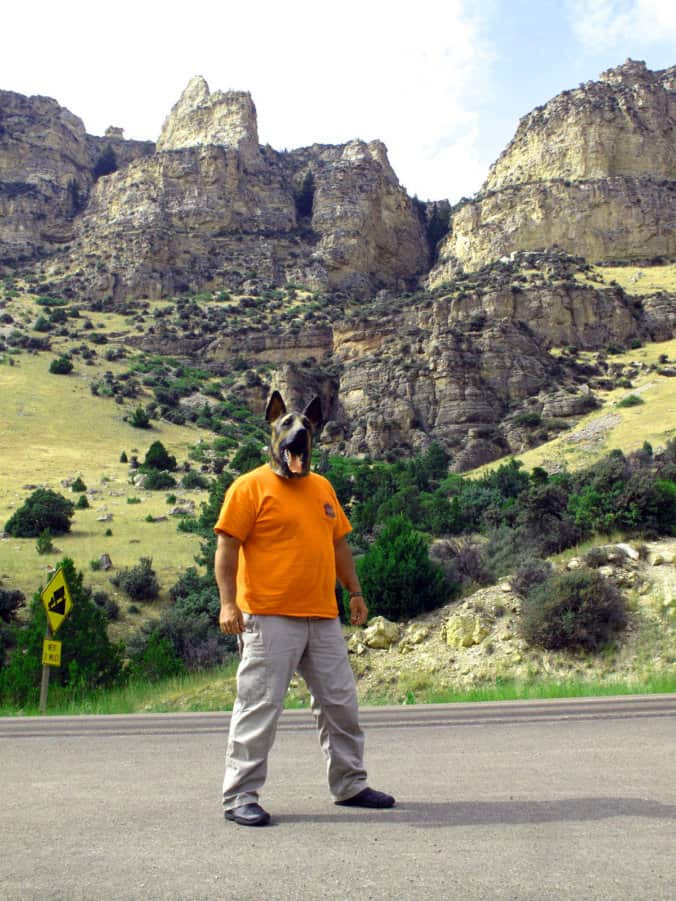 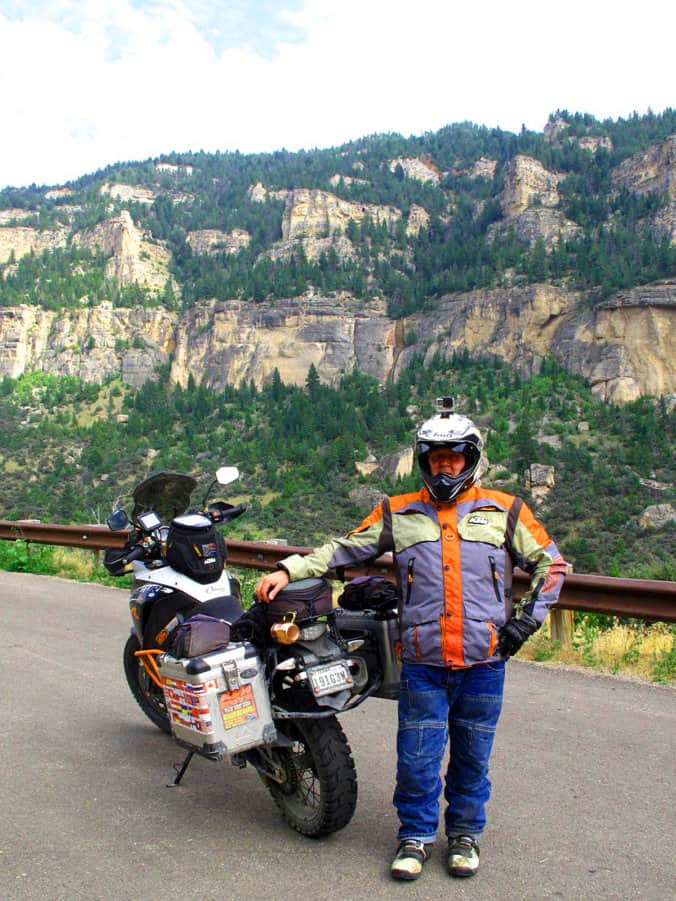 What a nice bike above, and such a handsome rider !!!

We passed through towns wich continued the Cowboy feeling. 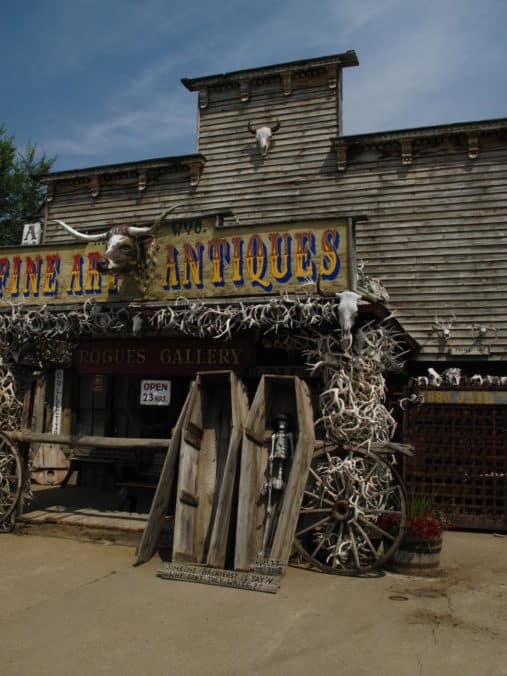 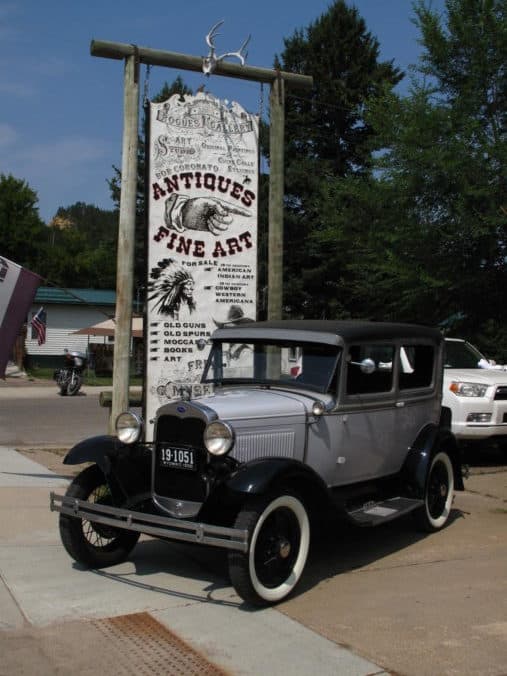 Maybe another reason for all the deaths is not just the helmets, people “buy” into the Lifestyle of a biker and late in life when they can afford one, just buy a Harley without doing the time in the saddle, so when the Paw-paw hits the fan they lack the skill or reflexes to re-act, resulting in accidents, and then the image of riding wearing only a head-scarf do the rest. If you cant ride a bike you can buy one and get Training Wheels: 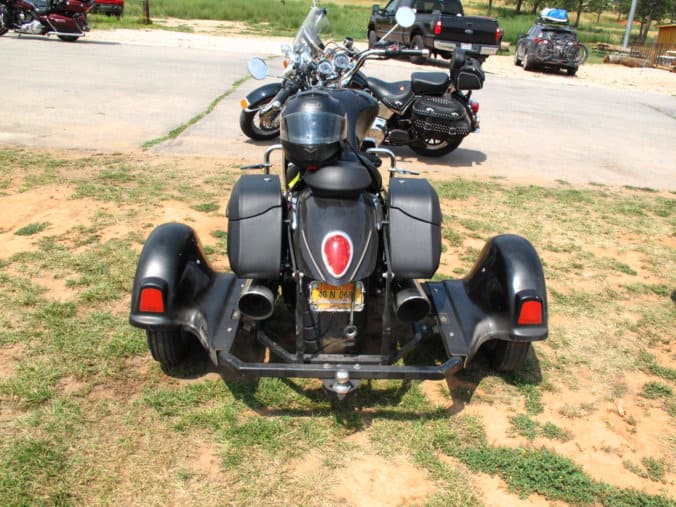 Tomorrow we ride around Yellow Stome National Park, cross into Montana for lunch and as I am writing this, the route for more Twisty’s are being studied.