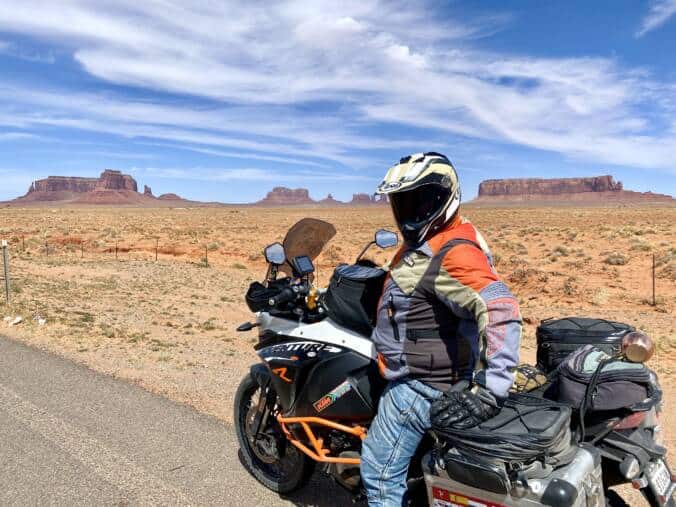 There was a time today that I did not think I would be able to send out this Blog today, I was convinced we were all still going to be fighting our way through desert sand, dehydrated and awaiting certain death by Cayote’ Dinner. But here I am, with a Bourbon in my hand and many good photos to show you. So lets “start at the very beginning, a very good place to start”  (as the song goes which I doubt many of you know.)

As we arrived in the Village we met-up at the only restaurant and immediately had to order food as the kitchen was closing at 8pm, with the sun still high in the sky. We slept so remote last night that there was very little accommodation available, so we slept in a log cabin block with several apartments, each consisting of two rooms and a little kitchen, lounge and a bathroom. We made a fire and spoke nonsense for a while and then went to bed, it was bitterly cold. This morning we left at 8h00 hoping it would have warmed up, but it did not really, 0,5 Degrees as we left. 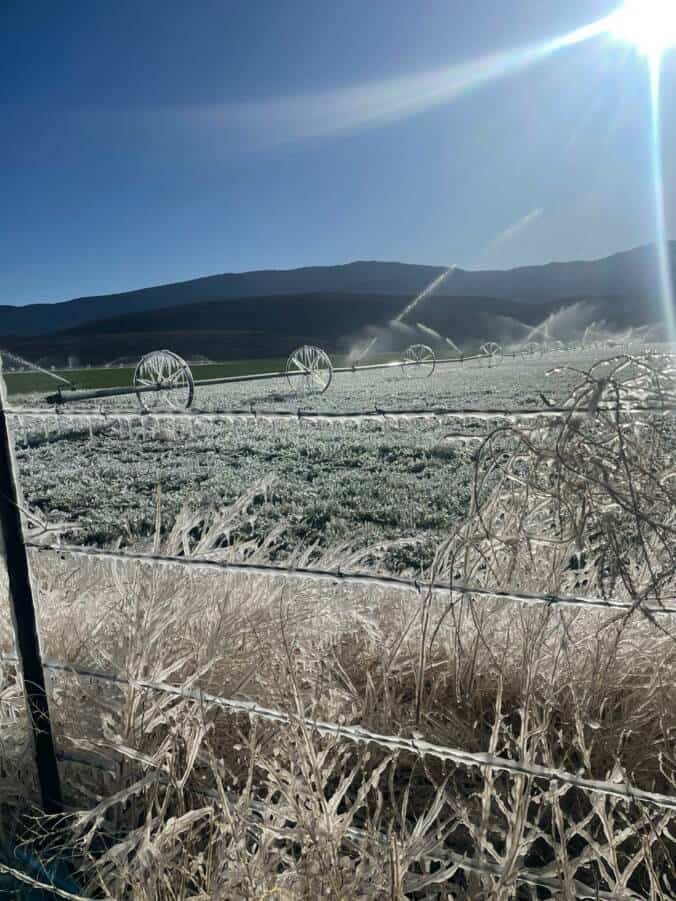 This farmer left his sprinkle on too late last night.

We dropped down the mountain and it got a little warmer, but then, at 8h30 Tex decided it was time to wake us up and pointed us into the sun on todays 1st 30km of gravel. 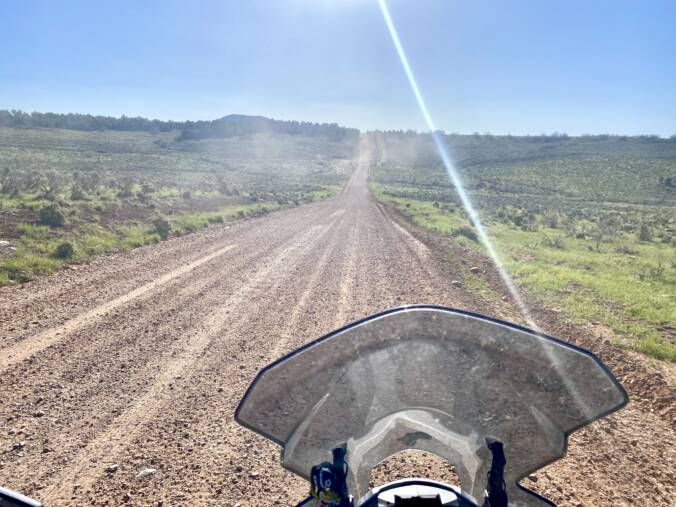 The entire day’s scenery was spectacular, 1st we rode in the pine forests of Utah, then we crossed into the semi-desert of Arizona and then later back into Utah. Sadly our breakfast and lunch was bought at the gourmet counter at petrol stations, but the scenery made up for the heartburn we got. 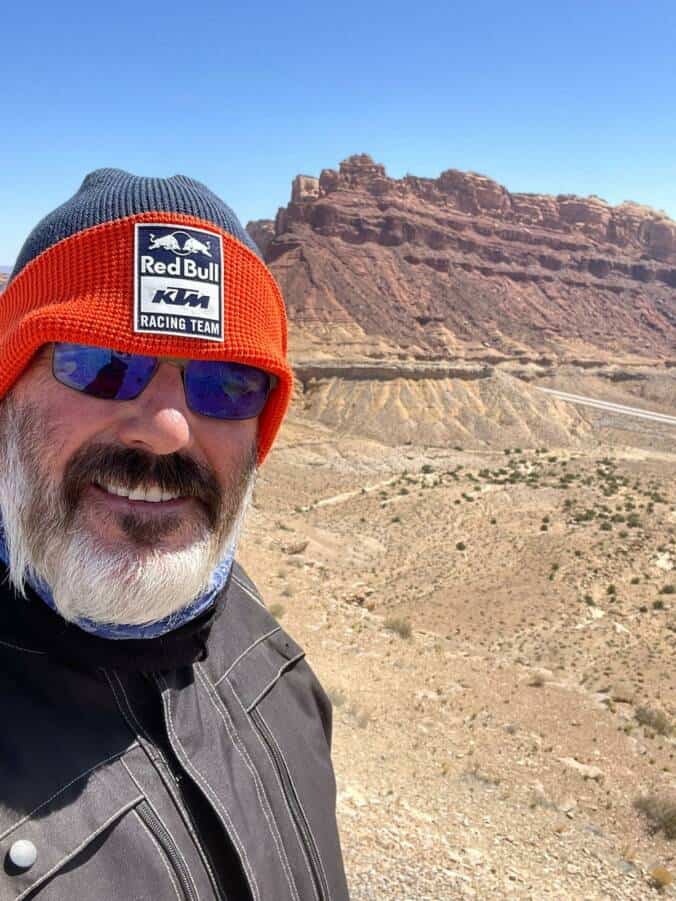 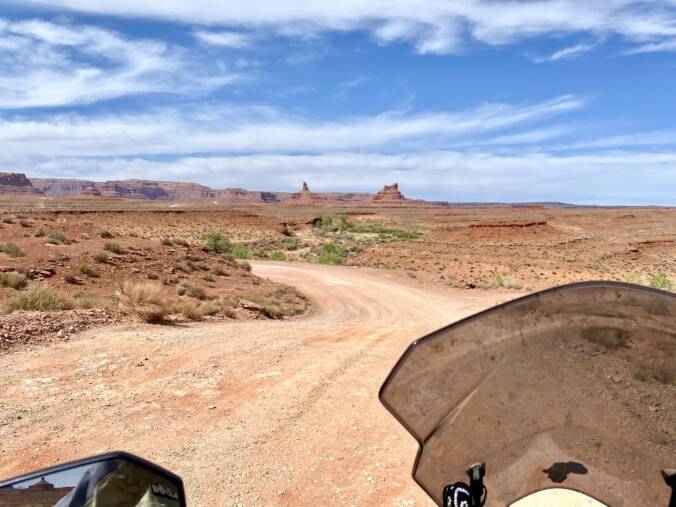 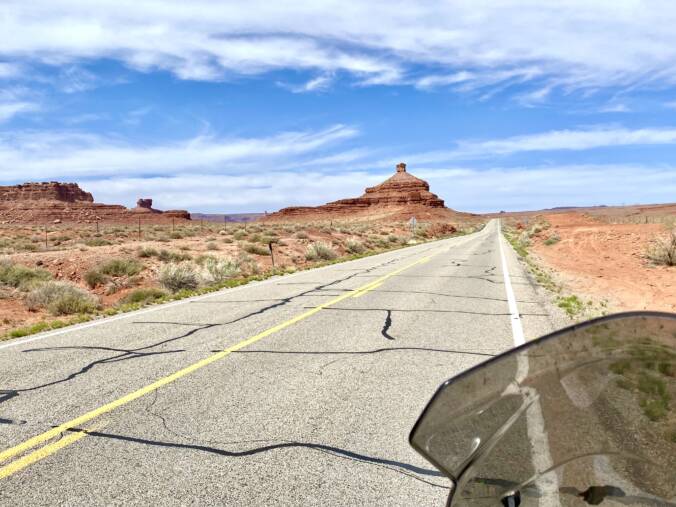 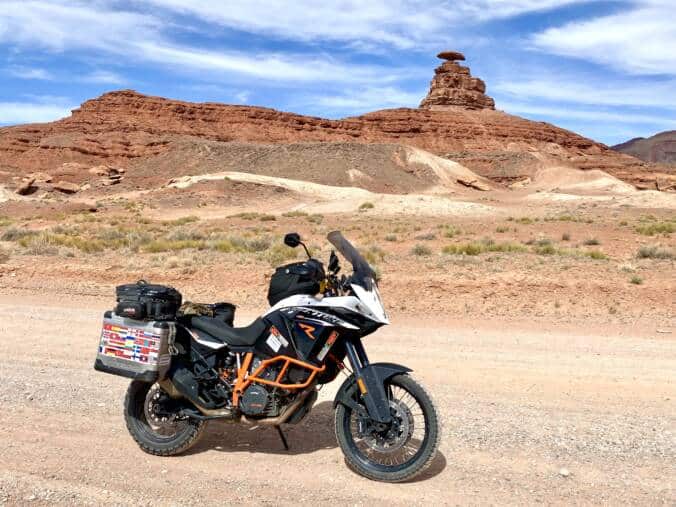 Every “Cowboy & Native American” movie I ever saw as a kid was probably shot in this state, you can expect to see a Horse-Person riding around the corner any moment: 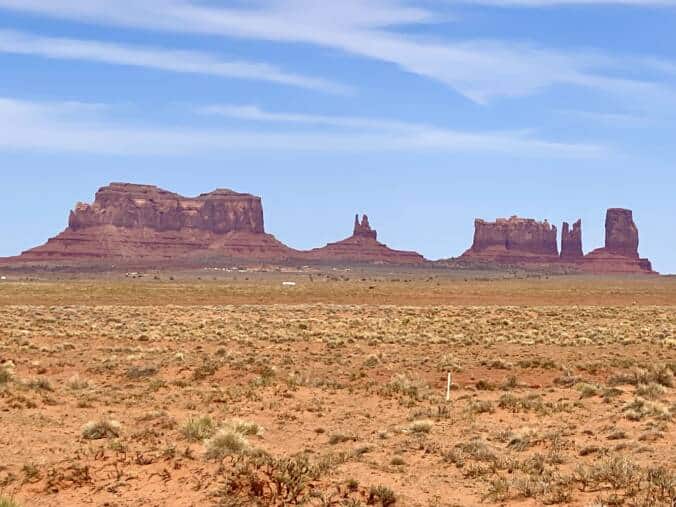 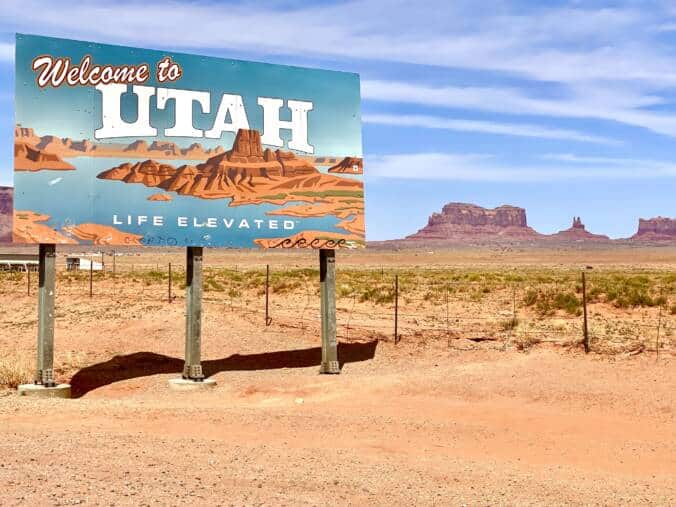 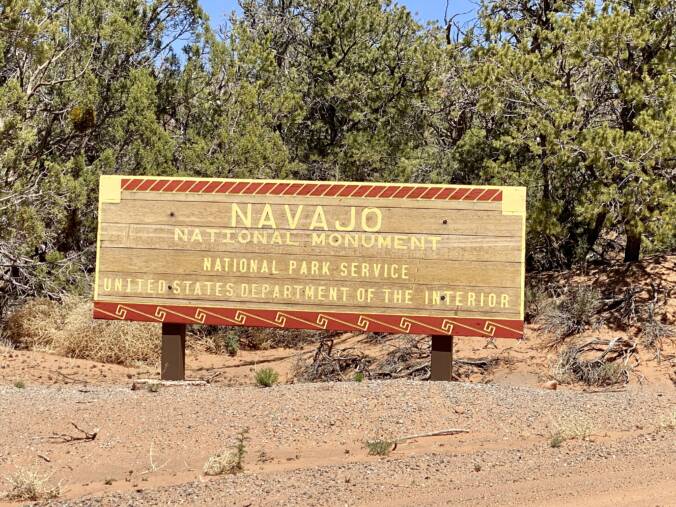 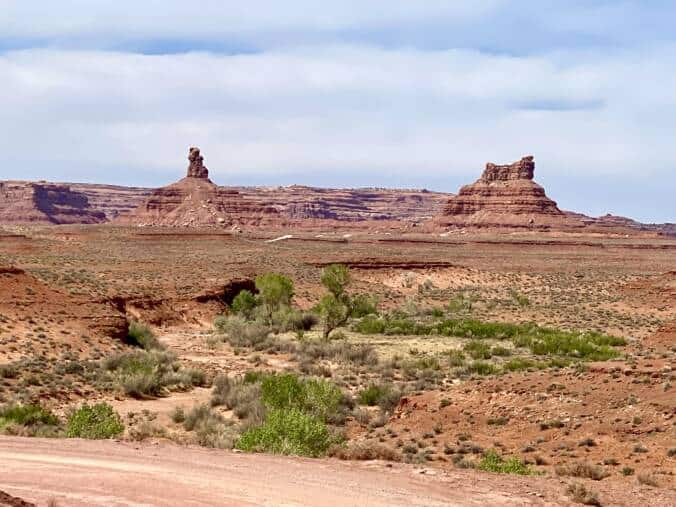 I am a firm believer in something we call in Afrikaans “Die Blinde Shambok,” or. as they say in English, Karma. So Milsy was going to feel the pain today after stealing my bike keys, and surely, it did happen, his bike started miss-firing and he was reduced to 80km per hour.

So this is what he looked like at our 1st Fuel Stop: 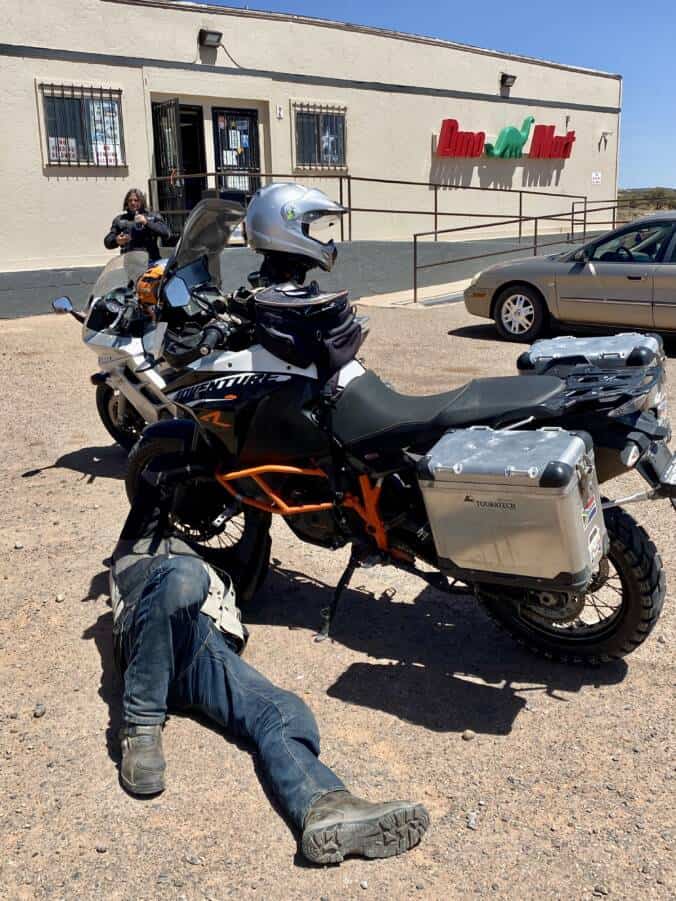 And then later down the road Milsy, the Key-Stealer, looked like this, with Pie helping: 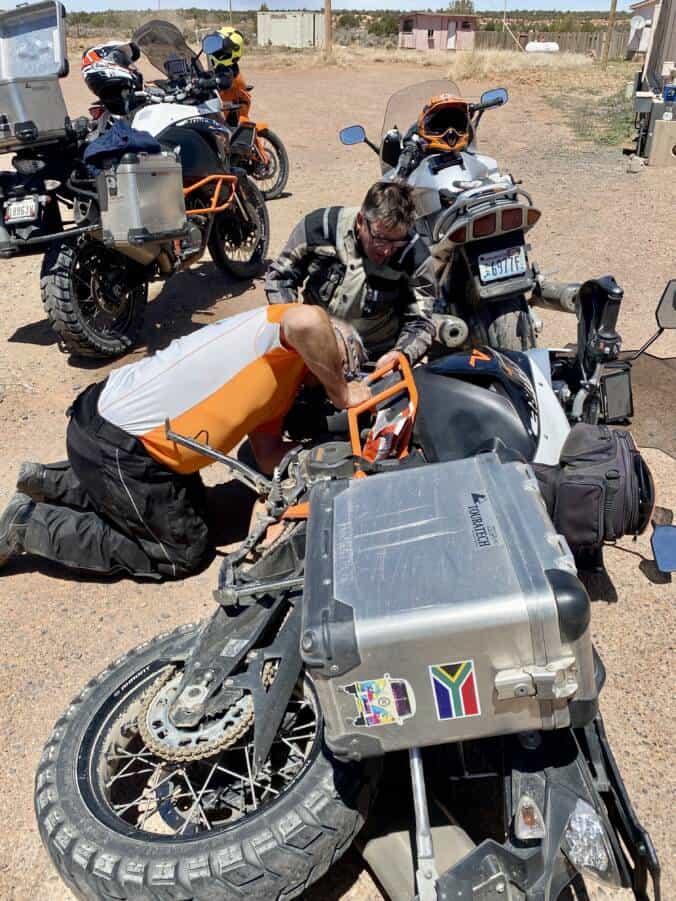 But less of him and more of the road and scenery today: 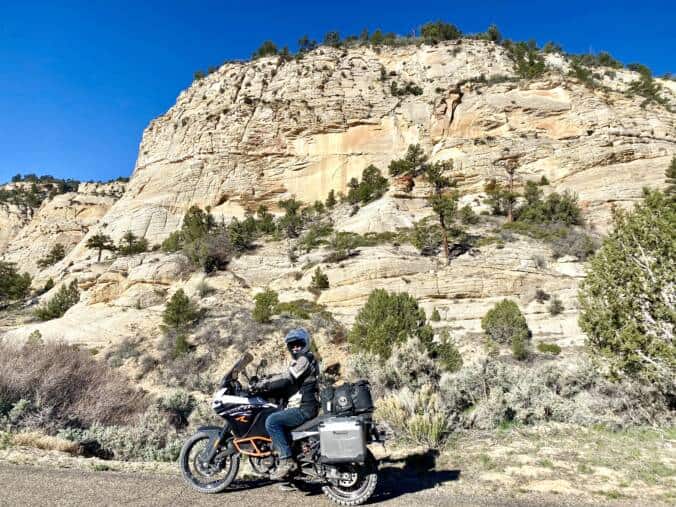 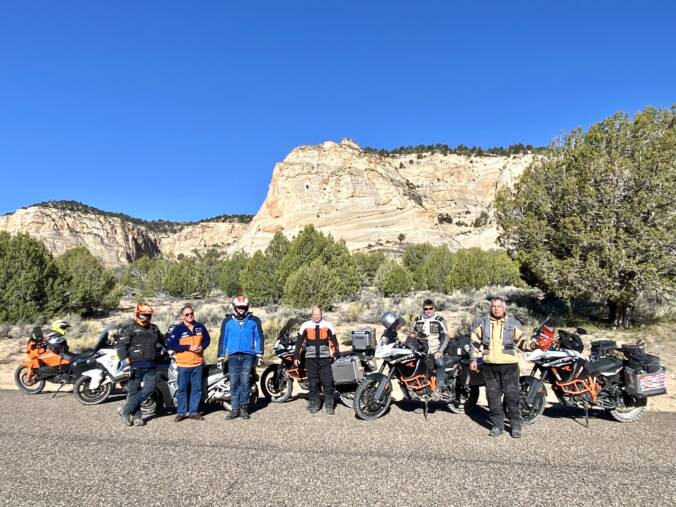 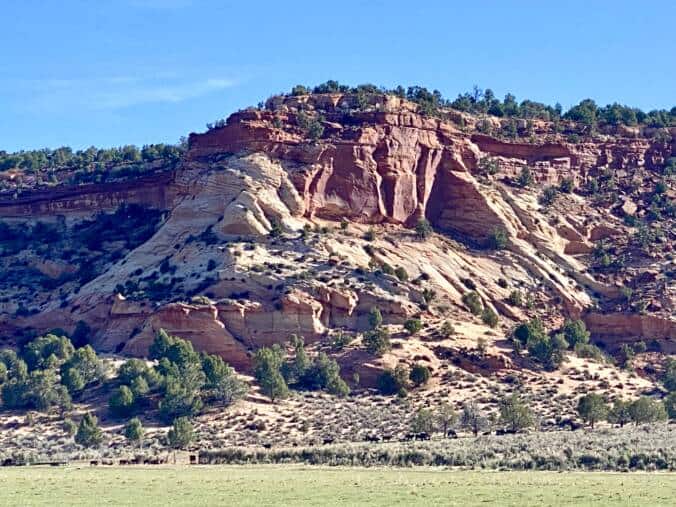 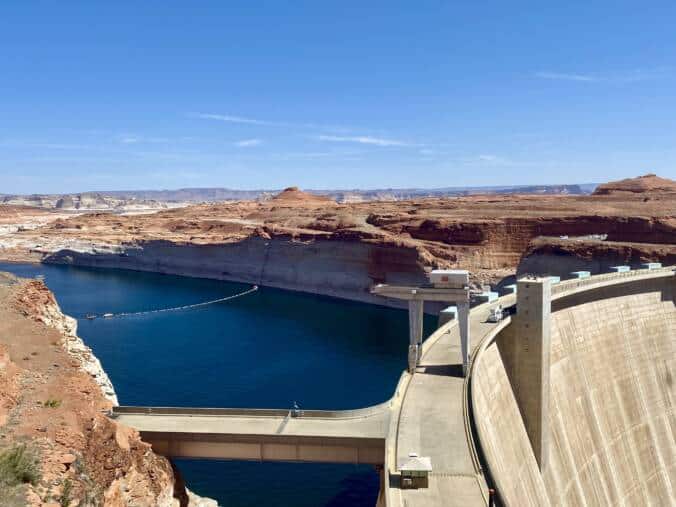 Another huge Canyon Dam making Hydro Electricity in the middle of no-where. 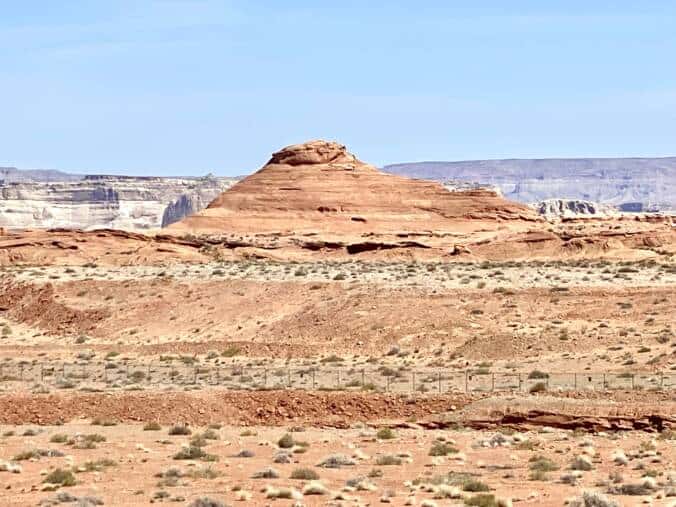 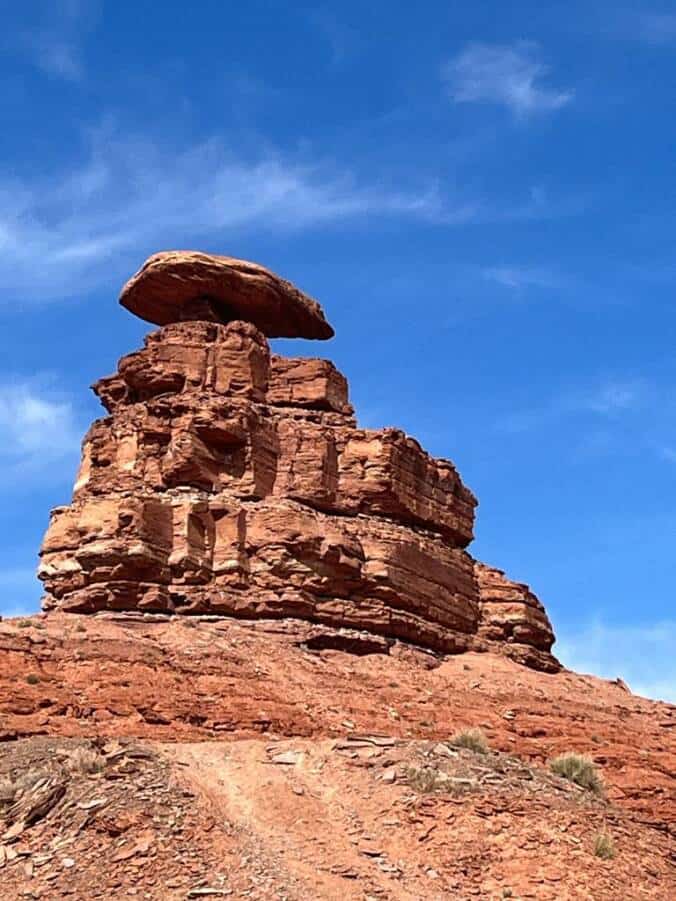 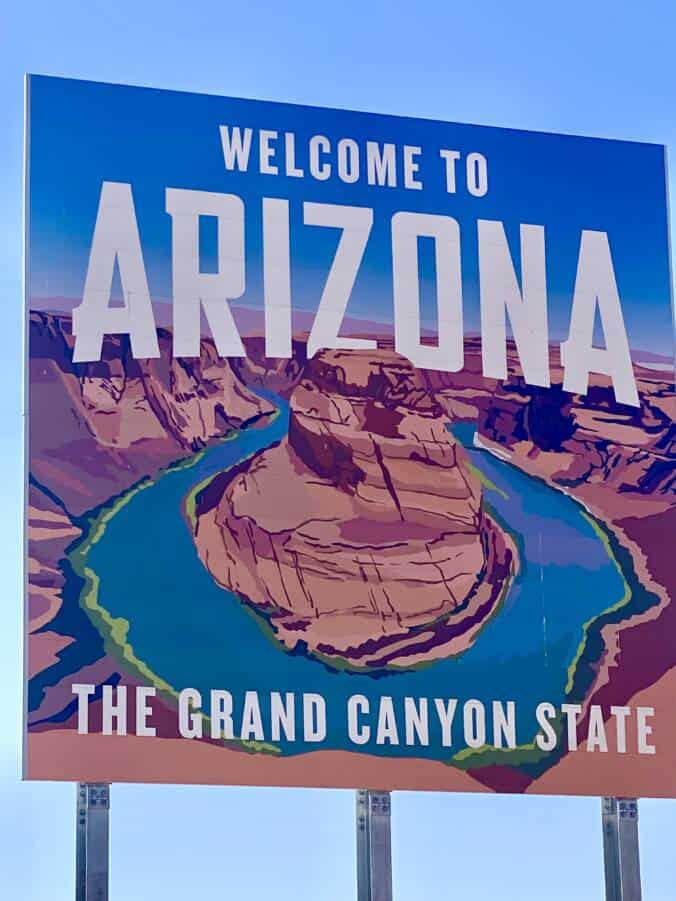 But as we all know “Pie Has Magic Hands” and the problem with the Fuel Pump might be fixed, time will tell.

So we were all in high spirits when we agreed to add another Kronkel Paadtjie (twisty road) and to make it a Dusty-Kronkel.

I noticed the gravel turning to soft sand, my absolute nemesis, then Pie stopped up ahead and deflated all our tyres and I saw on my GPS that we will be turning in 3,4km, so surely it will improve at the turn and surely it might become good gravel or bad tar in 3,4 km, so we continued.  But the sand became thicker and thicker every 100m we traveled. And when we got to the turn in the road it was actually a split, and there it really became impossible to ride, we were falling like flies, panniers were coming off at most falls and eventually they were just placed in the road, Rocky was in Danny-Boys car and sweeping behind us, picking up panniers, jackets, empty water bottles, and we Duck-Walked on, and on, for another 7,7km before the road got better. 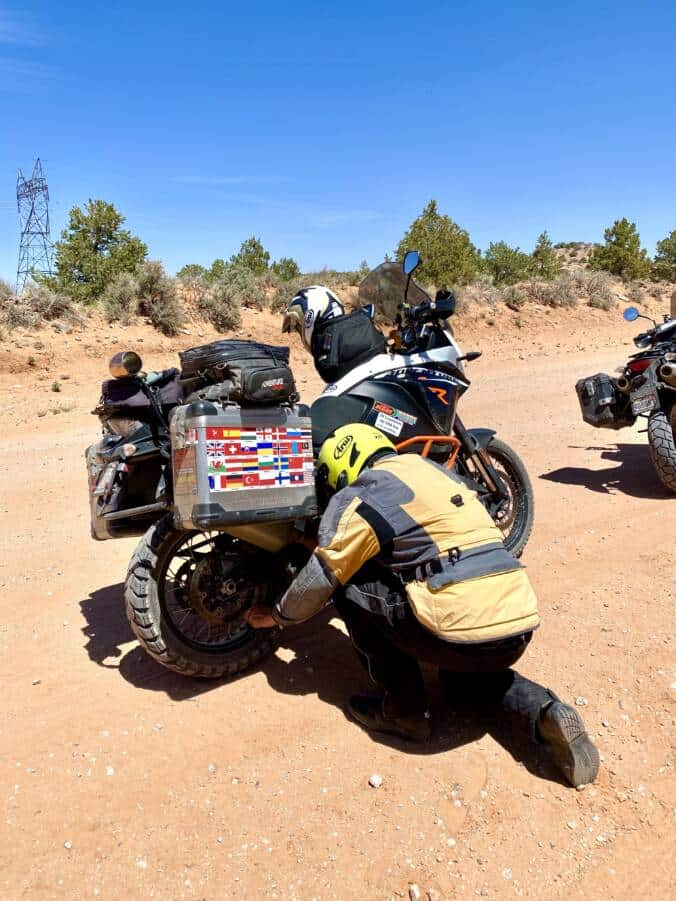 Today Pie was eating Voltaren and Cataphlam like Jelly Tots, yesterday he hung his legs down the side of the bike to rest his legs from the sitting position and his boot hit onto something in the road at 12km per hour which almost knocked him off the bike and which swung his one leg backwards at 120km per hour, and he ended-up sitting sideways on his saddle instead of facing forward, which shows us that he can probably still do “the split.” But today he is in great pain. But he still managed to kneel down to do our tyres for us, what a man!!!!!!!!!!!!! 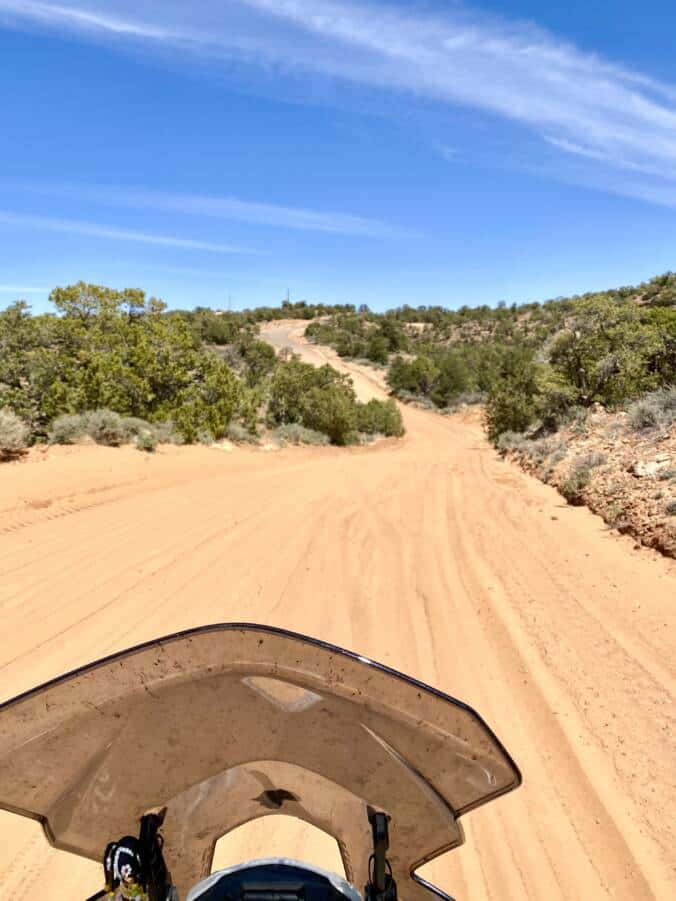 But Pie was not the only guy in pain, I was also not well and in pain, yes less pain than Pie, but still pain. My pain is as a result of sore ears, yesterday I put earphones into my ears, why????? Because my fancy Bose Sun-Glasses with their “out of ear sound experience” works well up to 100km per hour, and that is if there is no cross wind, more than 100km per hour, or only a slight cross-wind results into too much Wind Noise in my helmet and then you cant hear the music. So these fancy sunglasses will in future only be worn when I drive old Jerri or old Sky Canary, my old Land Rover and Old Toyota Land Cruiser pick-up, neither of which has a radio in. But that was not my only problem, I am also suffering from a few Fever Blisters and I think Milsy gave me his Head Cold which he had 2 days ago, so I am feeling very sorry for myself.

Andrew, what do you say about the size of these Smokers??? See how small the wheelbarrow looks compared to the Smoker: 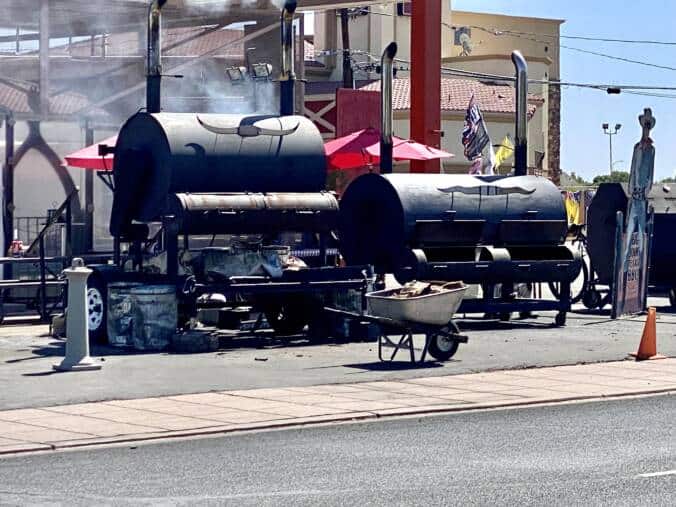 We are back into Tourist Country, and the roads, and Camping Sites were filled with Camper-Vans, Trailers, Caravans, Big trucks, RV’s and Toys. These are two that impressed me. This guy pulls a car for sight seeing, has bicycles and a Three Wheeler. 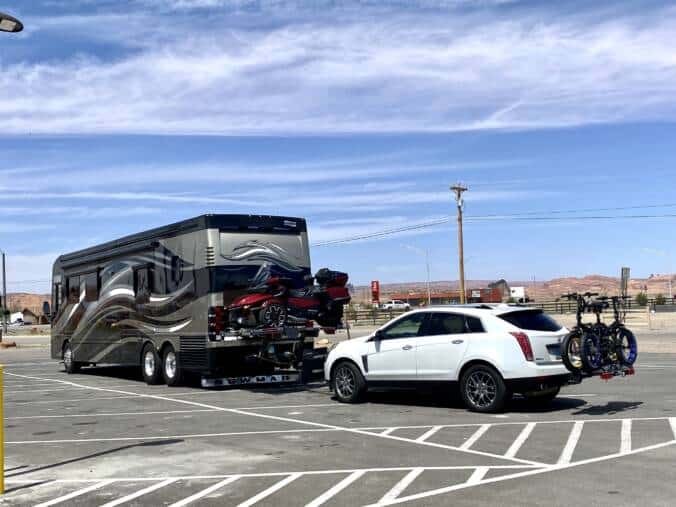 This guy is camped in the middle of the desert, and he brought his Side-By-Side with to play and sight-see. 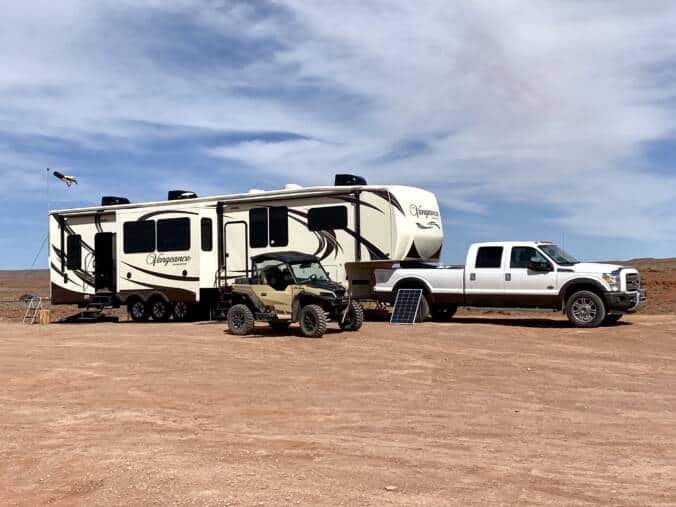 I hear many people work their whole life with very little leave, then when the kids leave the house and they retire they sell their house and buy a huge Camper Bus or RV and then tour from state to state for as many years as their health lasts, and then they sell the camper-van\RV (for which they get hardly any money back,)and then they don’t really have enough money to live well until they die and are forced to buy in a small Retirement Village, or worst, have to live in their RV until they die or end up in a hospital.

An interesting fact about Utah, they may not serve you a beer when you stop at a place, like we did when we rode into town today, not even after a hot sweaty ride, you have to order something to eat first, only then will they serve you a beer.