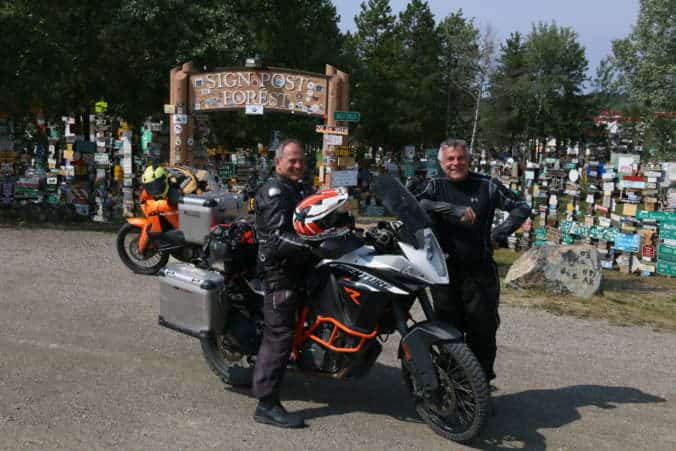 Yesterday evening we went out to dinner at Kathy’s Kitchen, we could either eat there or at YFC, which is exactly like KFC, but instead of red and white, Yukon Fried Chicken’s colours are Yellow and White. We thought about going to YFC, but as we entered, there sat, “Die Pappagaai” (The Parrot) as we had named the guy from the road-works who earlier in the day had lost-it, and shouted at Pie and Rocky. He did look like a Parrot when he jumped out of his Construction Vehicle Truck with his hair cut in a Mow-Hawk Style, then dyed red and blue.

There are many Road Works we had to pass through yesterday (as they can only work on the roads in the short Summer months,) and the attitude the adopted is that every motorist is a complete idiot, so there is this “Follow Me”  construction truck that one has to follow when there are roadworks. And yesterday we followed the Pappagaai for about 10km in the dust, behind Camper-vans and RV’s and caravans, so we did what any adventure biker would do, we worked our way through the traffic to the front of the snaking line of vehicles following the “Follow Me” truck, and then it pulled over, (to shout at us for overtaking in the construction zone,) but as he pulled over, Rocky and Pie thought that we had come to the end of the Roadworks and that Pappagaai had just pulled-over for us to pass him. He might have wetted his pants, he hooted and screamed and we all stopped, he stormed out of the truck and shouted at our two friends while the entire queue of vehicles had to wait for Pappagaai to vent his anger and frustration. I laughed o hard it hurt.

So YFC was not going to be eaten with Pappagaai in there, so Kathy’s was our only other choice. But the business had just been sold and the new owner was taking over on the 28th, so the old owner was not buying any new stock, so half the dishes or wine was Out Of Stock. The Pilipino staff were very sad, our server Odette (who also has a job at the bank,) and her young daughter who was also working there were not sure if the new owner would keep them even though Odette had worked there for 3 years.

Since we are now on the sad stories, here is another, Pie went to Ace Hardware with Dog (who wanted to buy some “waterproofing” for his boots and GPS,) and there they encountered another sad-story, the owner, the 76 years old owner opened his heart to Peter and told him everything is 60% off the price as it was a closing-down-sale, he had offered the business first to his children, but they did not want it, then he offered it to family members, they did not want it, and now he is closing down. Peter said he just wanted to hug the poor old man. tells me that there are many Ace Hardware stores shutting-down all over the U.S.A. as the big stores like Home Depot (Builders Warehouse type in RSA) are just too much competition for the small little hardware stores.

Here is some photos of Master Waterproof Expert Dog waterproofing his GPS and Boots:

After our sad dinner we headed back to our Motel, Big Horn Motel, only to find three old guys (and a dog) with their Trikes (Three Wheel Bikes) sitting on the steps speaking about their day (in Lawn-Mower language,) and giving us a display of how Chain Smoking should be done. They each had a trailer full of stuff and extra fuel and each had a cooler-box with drinks, which I presume they consume during the day as there are no Police on these roads. The dog rides inside a cooler box as well, without a Helmet, which we heard was ordered online in Kentucky (where they were from) but it did not arrive in time for the trip, so I suppose the trip was a “spur of the moment” idea as anything ordered on-line arrives within 26 hours Tex tells me.

My daughter Kylie LOVES these VW Camper-Vans, this one we found at the edge of town, parked next to the road opposite the Fuel Station. They were from Mexico as their sign in the front-windscreen explained, driving from Mexico to Alaska and any donations were welcome, but as all their curtains were closed, and they were obviously still “sleeping” (if the van’s a Rockin, don’t ,) so I decided against dstrubing them and giving them a donation.)

The day was not a Touring-day as we heard rumours, we might find a tyre in Whitehorse, which is the of the Yukon Territories (I learnt today that it was not a province or state as everything North of 60 Degrees North were named Territories,) so we had to race-off to ensure we find it open as it might close early on a Saturday. It has a population of 25 000 brave men, women and children that lives through the very severe winters this far North. At our fuel the owner told us they get 24 Feet of Snow, so that is 8 Meters a season. I believe this and this will for the topic to be discussed tonight over dinner, I will report back tomorrow if we were being lied-to.

We stopped at the Sign Forrest where somebody had made it their life’s mission to put-up as many signs as they can, there were thousands.

But Dog was off chasing little Porcupines again into trees, he even stopped at one that was killed by a car. We told him that it cant be as they cant a tree, but he asked Prof Google and these in North America can, so they are not the same species as our common “–” as ours cant climb trees, yet.

The scenery was similar to yesterday, forests, then lakes, the rivers, then forests, then rivers, then forests then lakes…………. non-stop, the whole day. I saw the 1st other vehicles on the road after I had travelled 117km. Today there was only 1 road that intersected with our road, and there was only one village we passed through, and I think there could have been 2 “fuel stations” servicing two RV Parks. We are very very remote and in the Bundu.

OK, can you see them now? These are Fire Weed (it is everywhere next to the road,) and is the official flower for the Yukon, (in the province I am from, Gauteng, I think our official flower is “The Plastic Bag” and is also found everywhere.

While I was eating my Hash-Brown and eggs, Tex came in to tell me that I had to come and see outside, the people who had the accident and drove off the road a few days ago were out side. Remember this accident:

Well, they had managed pack-up all their things and had once again driven through the night as they were on their way to Alaska to go-mining some gold, they made 3000 ounces last season and the oom (uncle) was very unhappy as he had in recent times made two accidents, all the same, him driving off the road, and each time it was another stupid person that pushed him off.

The only visible damage was the air-compressor’s wheel.

Here Pie is speaking to him about his Sleuls Boxes:

Tomorrow we continue heading North West, and have another long day as we are sleeping is Tok, plus we have a Border Crossing into Alaska. We hope to be in Fairbanks on Monday evening, then we start heading North, up to Wiseman, where Dog managed to find accommodation from a guy named “Clutch” where we sleep one night before riding up to Prudhoe Bay, and then we turn around and head back to Wiseman the next morning to sleep at Clutch’s place. We are hearing mixed reports about the road conditions if it rains we will have lots of mud, and the guy from Yamaha today told us they already did three recoveries this season for bikes broken on that road. We will also need to carry extra fuel as there is nothing on the way up there. So the Adventure is a few days away.