Where is Satun you might ask? It is opposite the Island of Langkawi, on the main land, but still in Thailand, we cross over into Malaysia tomorrow morning. We will be sad to leave Thailand, its people are such gentle and friendly people, many smiles, very humble people, they are also sensible drivers on the road and very entrepreneurial, hard working and lovable people. Thailand knows how to gear itself towards tourism and is doing an excellent job.

Yesterday Pie also fitted his new rim, but as he had only the inside of the rim and inside his tyre to pack for this trip, he did not fit the spokes to the rim before he left home, with special tool in hand and knowledge thanks to the Web, him and Tex got to work. 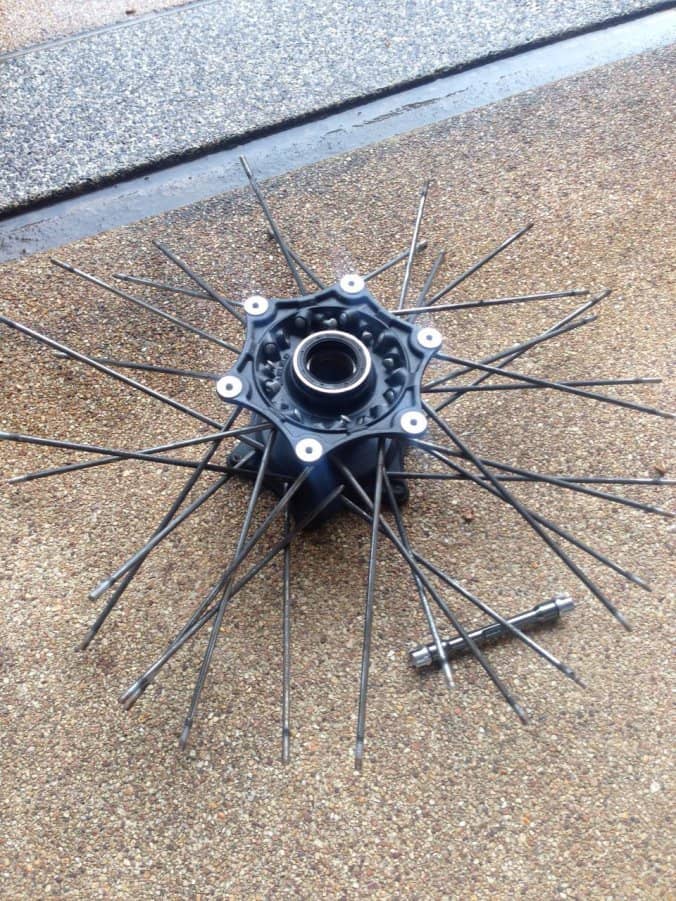 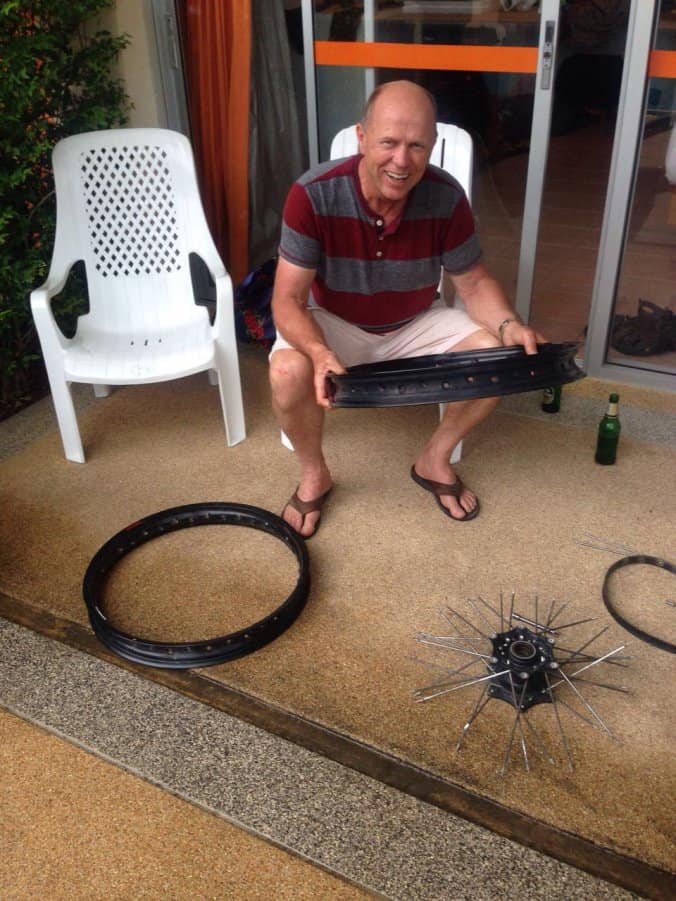 I presume he did a good job as the wheel made over 500km today. But the technical challenges continued today, Peens’s instruments stopped working 2 days ago, not such a problem, but due to this the electrical fan also stopped working as the message which was to be sent to the fan when the motor got hot died when the instruments died. So the blue bike was pulled out of the rain during a fuel stop and they got working, but they had to stop, go and get their reading glasses and then they could see the problem and fix it. 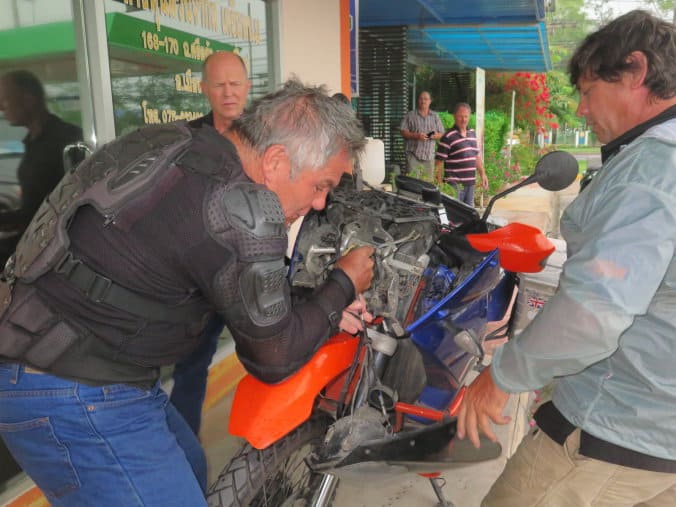 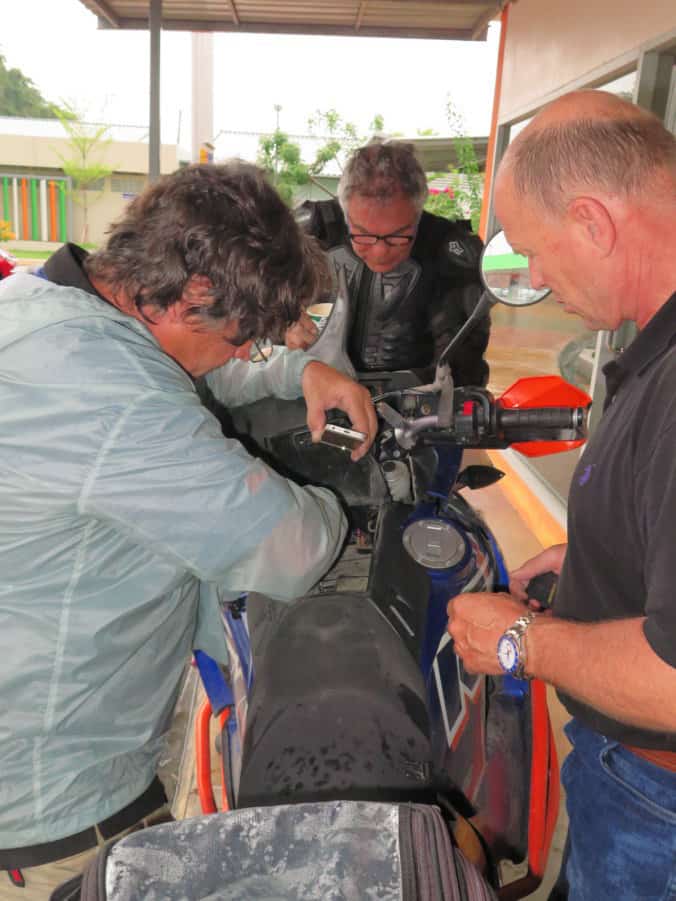 We have been seeing little “bakkies” or “pick-ups” transporting these weird looking fruit on a daily basis, so today when one turned in front of me I wanted to ride past it and stop and take a photo, but before I could pass it the man turned into a yard, I followed him over a weigh-bridge where his pick-up was weighed and then the fruit was off loaded onto large 18 wheeler trucks. I picked up one of the “fruits” and bit into it, to laughter from the workers who then explained to me that the fruit was actual palm fruit which gets pressed and then Palm-oil is produced. 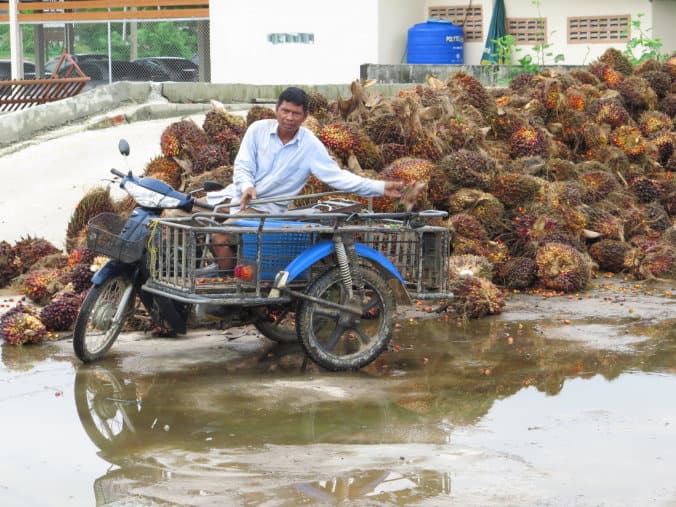 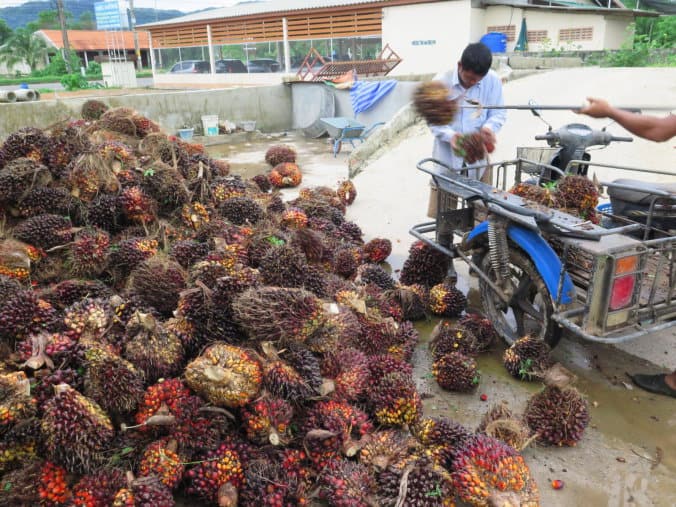 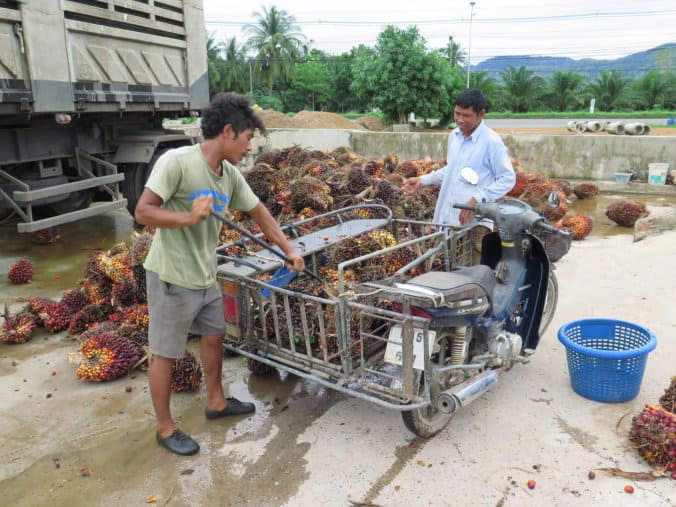 Thailand has a Royal family and the King’s photo is proudly displayed on every bridge and at the entrance of any government buildings. They sometimes also a picture the Queen with him, on 3 occasions I have seen photos of three teenagers with them, I presume they are the Kings children. 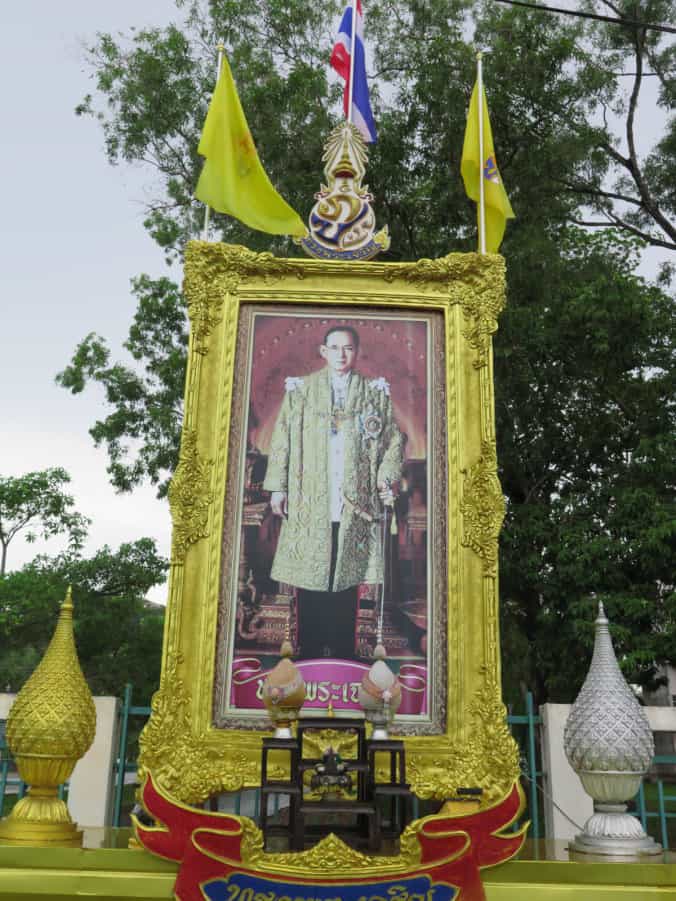 We rode in a rain storm for the entire morning and we got drenched, rain went into all of our boots and our riding gear was soaked, it got so bad that eventually I put on my rain suit which blocks the water but also the wind, so it gets hot and sweaty, but at least it is a little drier. At lunch everyone started taking off riding gear and took off the boots, but due to my poor track-record I took off no protective clothing, but this was a mistake. This is a photo of my hand, my feet are much much worst from sitting in boots full of water for 8 hours but that is a photo not to be posted on a family-friendly blog. Note in this photo who the boots made place for sanddals and shorts were the new “protection” for the legs. Tonight I am the only one in pain and the rest of the group all got tanned legs, I got “old-mans-rimmples.” (Yes, there is such a word.) 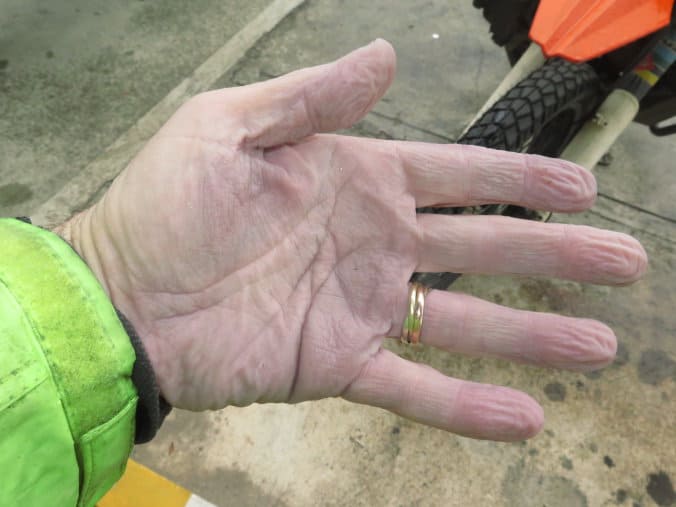 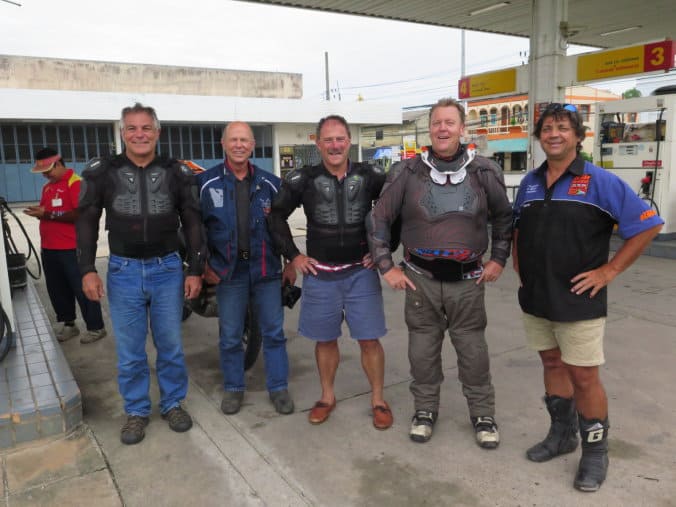 We have been told that Thailand is experiencing a drought, see how low the river level is on this photo, but I think the drought might have been broken today. 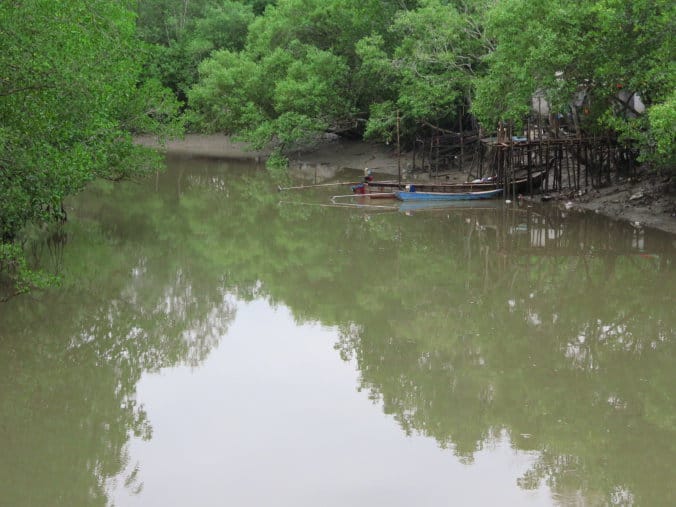 Ever heard of the famous King Crab? Neither have we, but we found it. 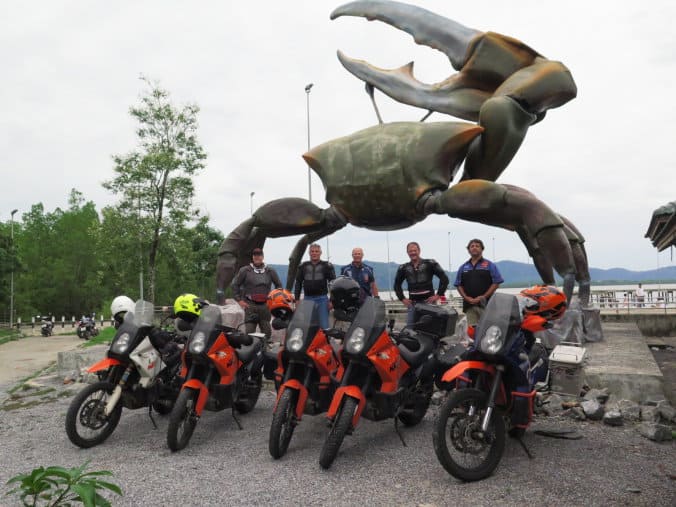 The scooters also get converted into mini-vans and mobile shops, see photo of this families Station wagon, note the child’s car-seat. 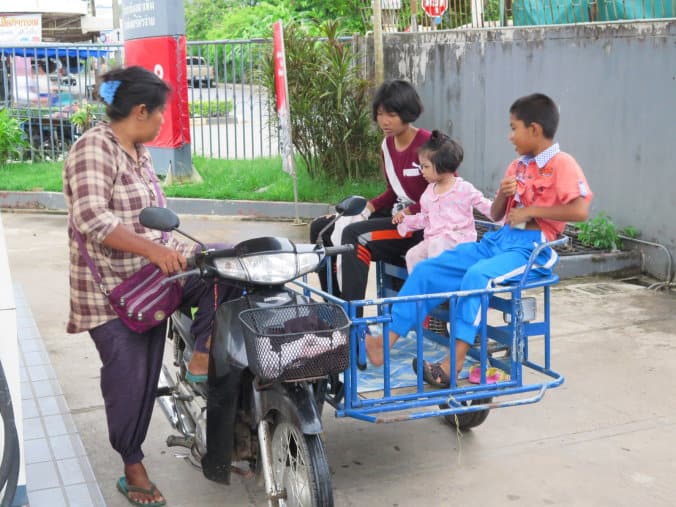