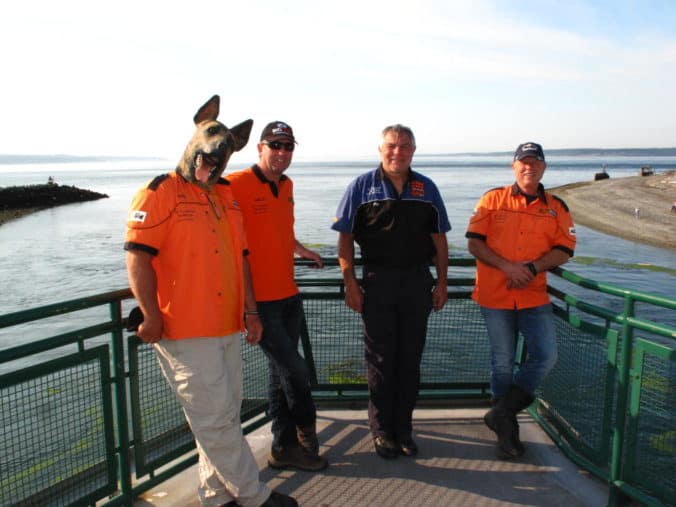 After I posted the Blog yesterday I went to the Laundromat to wash my riding gear, dirty cloths and my I-Pod, Note to Self : Your jacket has 9 pockets, check them all, jou skaap.

The area around Seattle is very fragmented and as you will see on the map lower down, the mainland is seperated from many other pieces of land by the sea, so instead of riding down from Oak Harbour (about 50km North of Seatle,)  to the KTM Guys (South of Seattle where the cheaper storage is) Tex and Dog planned a route through the Olympic National Forest on a piece of land opposite us and then we can by-pass Seattle’s city. Yesterday when we were still riding in the country we spoke to a businessman that owns a coffee shop\icecream parlour on route 20, and he was well traveled and asked us where we were heading, when I said Seattle he looked me in the eye and said “so why would you do that, it is filled with homeless people and the State are handing out money that attracts them and they stay and sh*t next to the road and now the state has increased taxes on the wealthy and companies to sponsor this hand-outs. ”

He was not lying. As a result of the increased taxes Boeing has moved some of their assembly plants to North Carolina where the tax is less and it is non-unionised. So maybe it was better for us to avoid Seattle Down-Town as I have had no shortage in my life of seeing the homeless and the suffering in Johannesburg where I live,( and higher taxes has not reached them.)

FOCUS READERS, there are very little photos today so it is mostly going to be words, stay with the story-line:

So because we needed to cross over with a ferry we needed to each book on-line. I was sitting at the Laundry listening to my I-Pod making a big noise in the washer and had time, so I was the second person to successfully make a reservation on the ferry, although I made the booking in the wrong direction, instead of making it from Coupville to Townsend I made it in the opposite direction. So the rest of my exciting time at the laundry was spent to try and rectify the mistake, and at the end the ferry we were aiming for was full. We learnt that the tide was very low and that the 1st ferry was cancelled. So without 7 bookings for the ferry we thought, as optimists do, that “we will make a plan” and that “they will squeeze us in” etc. so the decision was made to make like the saying “The Early Bird Catches The Worm” except, we woke up much earlier and then the Early Worm caught the Bird before it could catch us, so we set off at Sparrows Fart to do the 40km ride to the ferry terminal through green pastures and fragmented pieces of land with sea in-between looking like lakes.

At Breakfast, and I use that term very loosely (as I believe breakfast should at least involve a table and a chair,) we each got a very weak paper cup of very weak coffee (so much for Seattle Coffee) which I stired with a plastic toothpick and then there were muffins and bread, a toaster and butter and jam, but without a place to sit, buttering your toast standing is not fun, so we each ate a muffin standing next to our bikes. But then my riding-mates each had a comment on yesterdays Blog and how negative I sounded and that 2 hours was not “wasted” and that I should get out of the bed from the other side, and on and on it went. They lectured me on my coice of words to describe yesterdays ride, how our de-tour was made to look like we had a terrible time and that I am painting the wrong picture with you the reader.

I have no doubt that al the wives and family are updated daily on the rides and that they were also disapointed as my reporting of the events differed from what their husbands\boyfriends (with great communication skills) have obviously told them in detail plus sent photos, so at least they know my summary of the ride yesterday was wrong, but for the rest of you, please let me re-phrase, when I said 2 hours were “lost” I did not mean it that way, all it meant was that 2 hours was spent not focusing on traveling West, that 2 hours were spent on Fun Time riding around and just enjoying ourselves going over the mountain on twisty gravel roads.

And yes, I never said the words Beautiful or Awesome as I felt I could not keep on repeating these words in every days Blog Posts, and I was saving these words for when I do a summary of this trip tomorrow, but I hoped the photos would speak louder than words.

So with this complaint session behind us we set off to the ferry terminal hoping that we were early enough to cath the bird.

When we got there we stood in line and I was ready to turn around and fight our way through the traffic heading South, but the man in the office told us that he has 8 motorcycle spaces that are not available on-line and kept for people like us, the early arrivers, those worms that grabs the bird by the ‘Short & Curly’s” so we took 7 of the 8 spaces and parked in the loading lane.

I do not want to write we had a lot of time to “kill” (waste) while waiting for the ferry, but luckily I dont have to as I took my small camera and got in-touch with my inner-artist and took some photos. 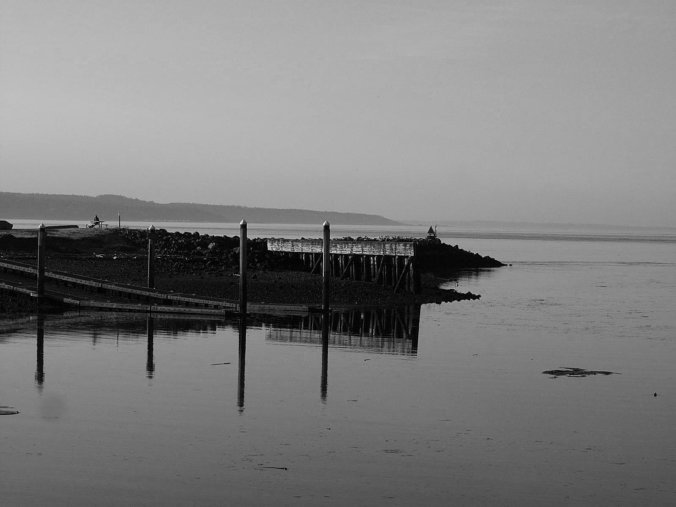 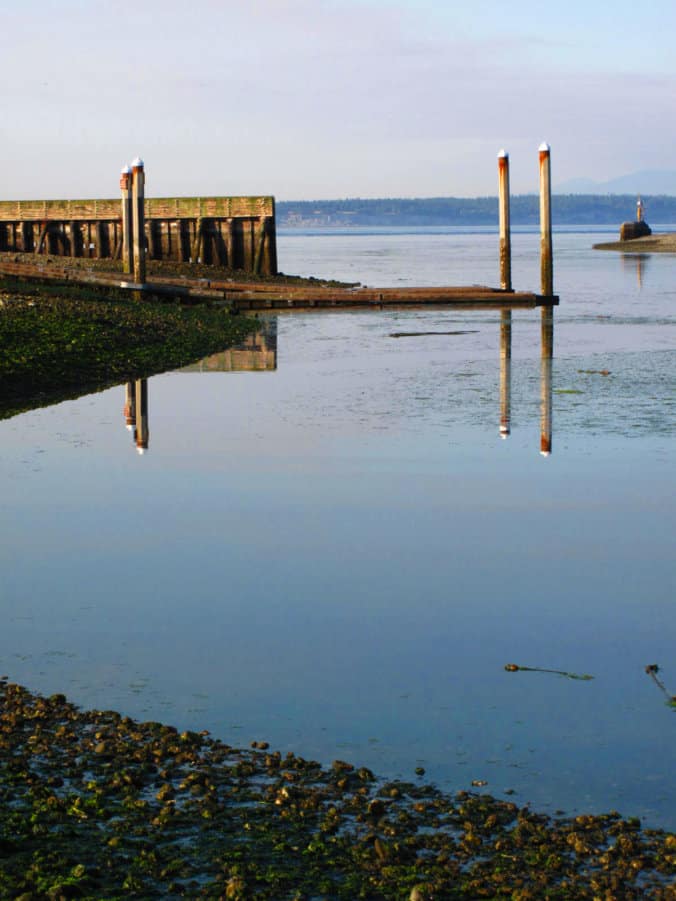 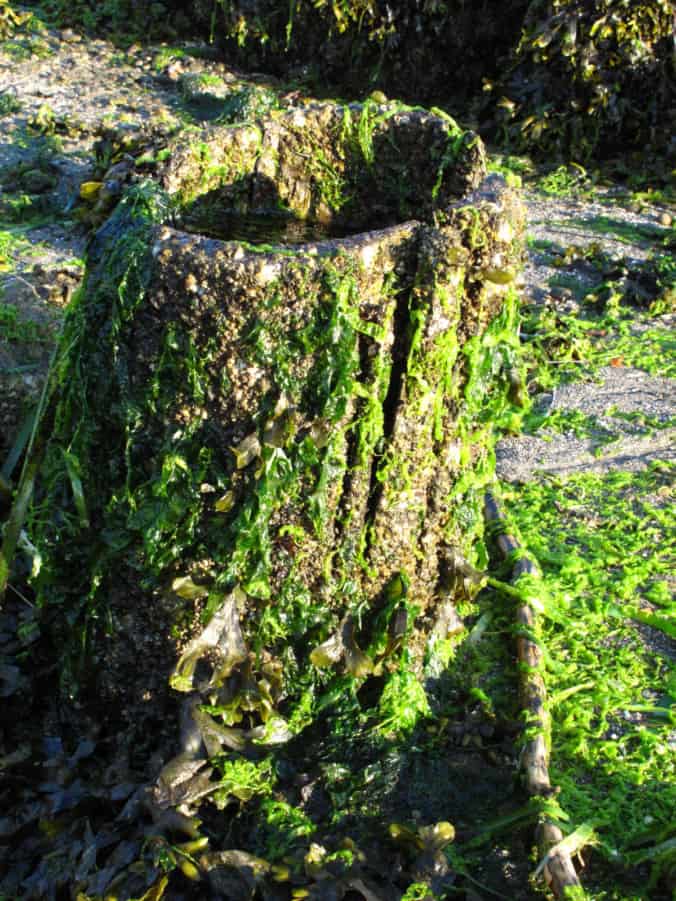 As you can see it was slimey and slippery and as a result I only fell once onto my newly cleaned riding-pants. 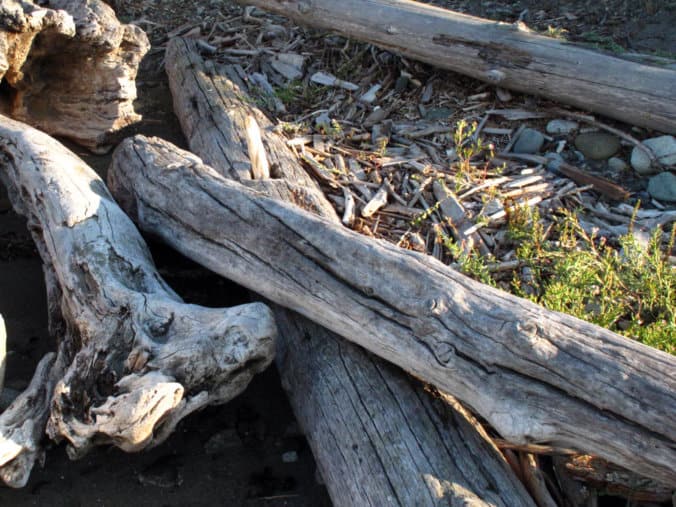 See the Dragon feeding in the photo below: 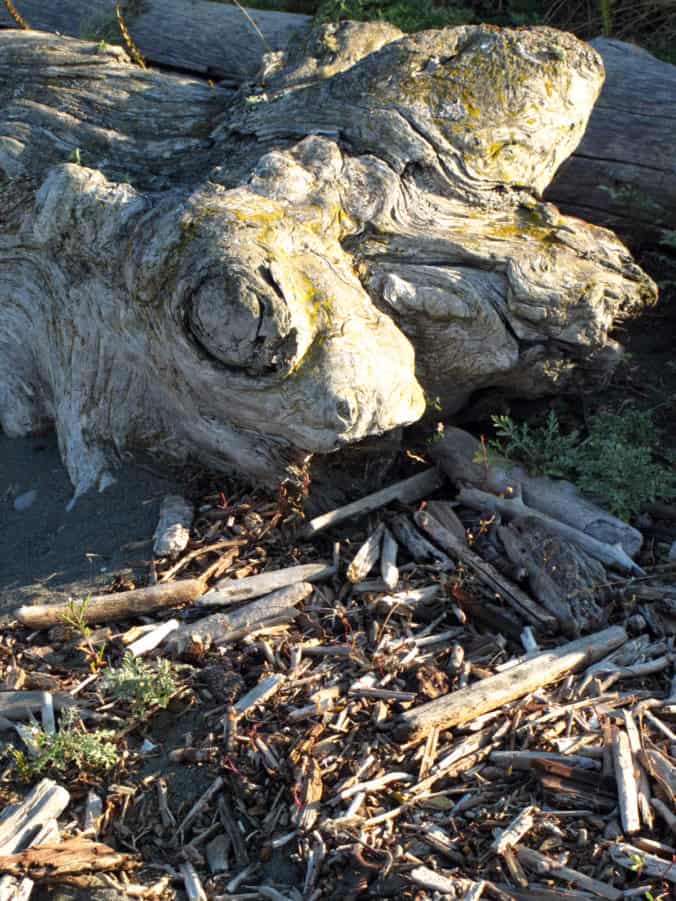 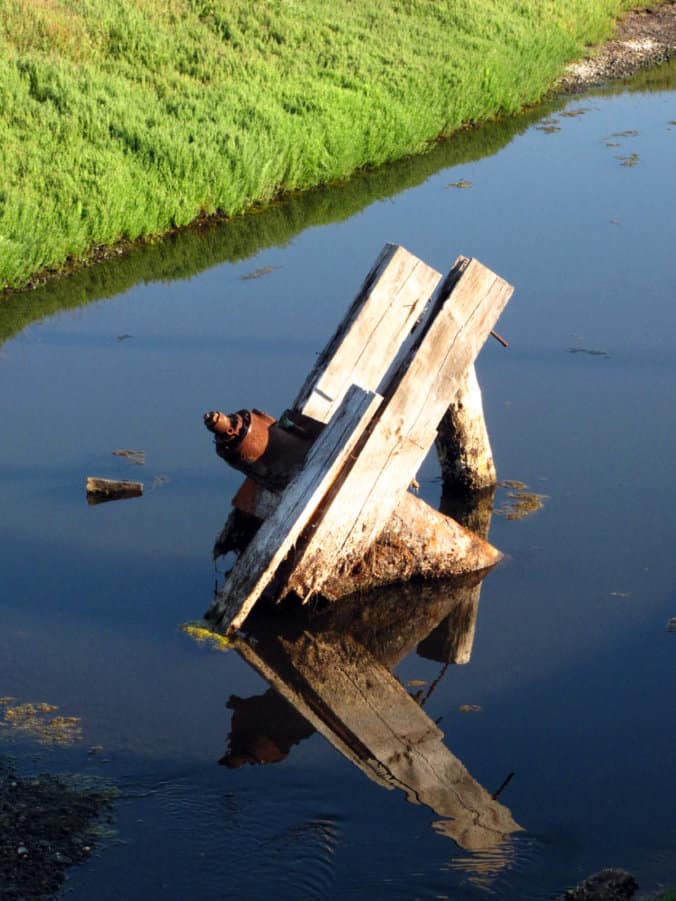 So after no time was wasted the ferry arrived and we got under sail. 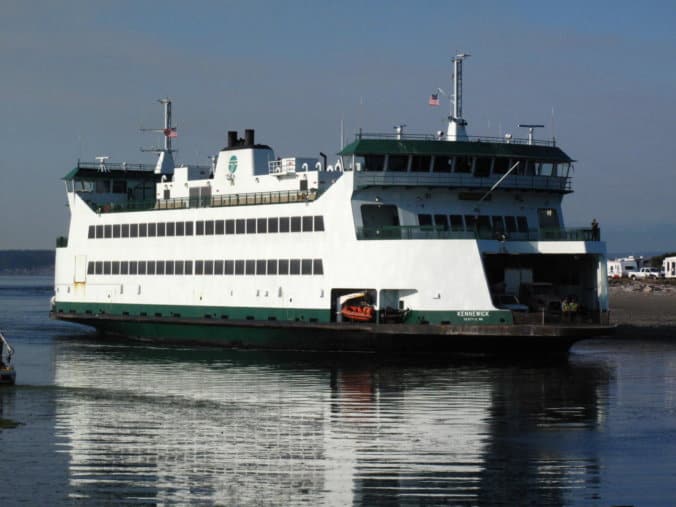 Having their Titanic Moment at the bow of the ferry. 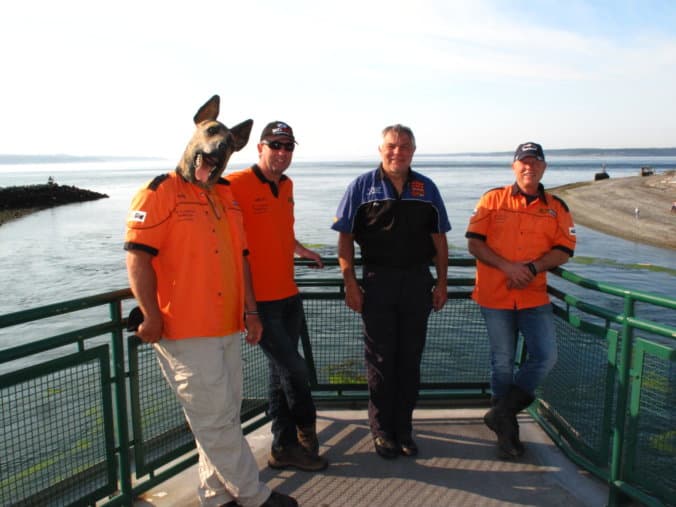 As with Paragliding Competitions, the first one that lands on the flag wins, or, in ferry terms, the 1st one off the ferry wins the prize. Peens was off 1st at all cost and played Chicken with the blue 18 wheeler, diced with death, again, and won, again. 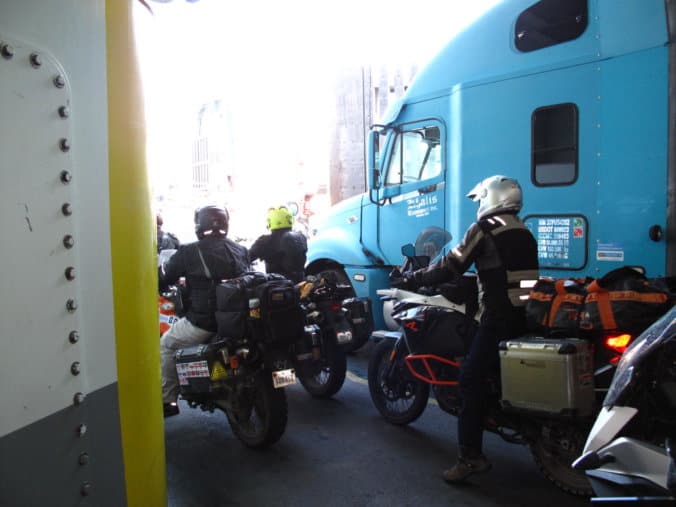 The ride was in the Olympic National Forests, We had to cross over from where Dog is pointing to the piece of land at the 7 O’ Clock Position. 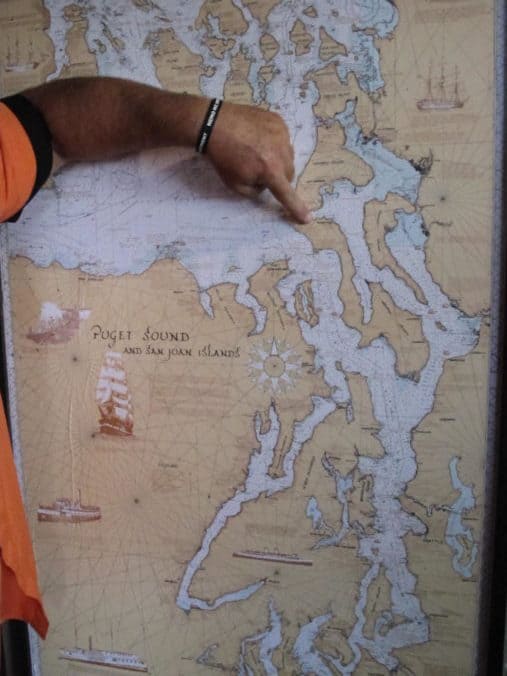 It was a short ride and yes, I better say it, dont want to spoil my breakfast, again, it was beautiful and wonderful riding under the shade of the Pine trees and the forrest, (but tomorrow I will tell you that every day has been special, and every day’s ride amazing, so unless I ride over a Unicorn or see a Naked Mermaid, this day’s riding as going to be pretty-much the same as the past 3 week’s riding, spectacular.) 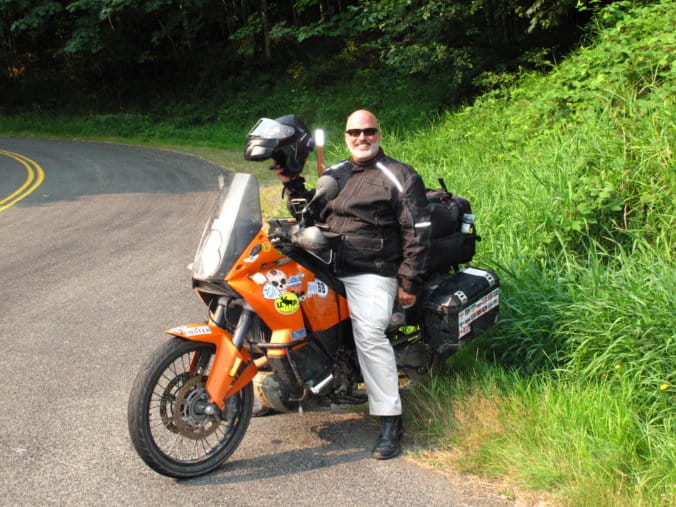 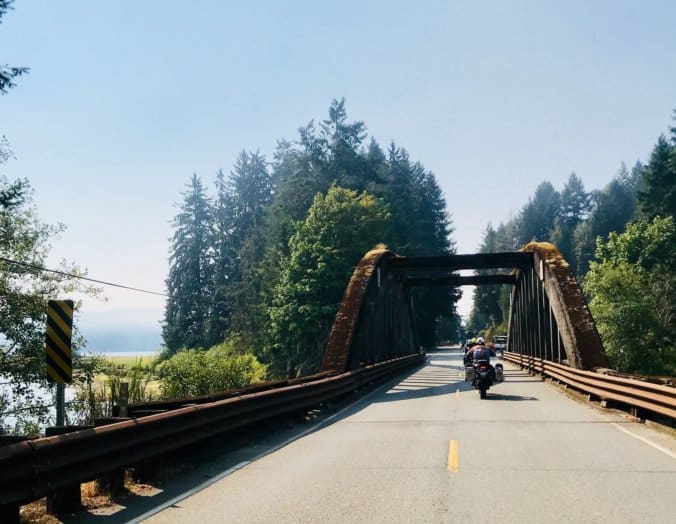 We arrived at KTM and got a very luke-warm reception, maybe because they are so busy at this time of year, or maybe we are just use to some recognition for what we have done, (few people arrive with bikes that traveled so many kilometers in such a short time) or maybe because this is a 1st world country and arriving at a certain point is no longer an achievment. I miss the days when we made it to places like Kiev or Turkey, or Russia and the KTM Guys would treat us with some respect, I mean, we did ride these bikes (ok some of us used two bikes) 78 000 km, we have meandered through 29 countries, but they were so busy they told us to go to find Storage, lock the bikes away, drop off the keys and e-mail them the Jobs Card on what we want done, and that is a 1st time, on all of the many many occasions before, no matter if it was KTM in Mongolia or Finland, we got some recognition and some attention, but not today, lets hope that this shows how they focus all their attention on the bikes they are working on and not on a buch of guys standing around in their shop, and that when we collect the bikes in the summer we will be smiling.

Then we went to find Storage, a 10 x 20 foot was big enough to fit all the bikes. But Pie forgot to turn off his ignition, for which I was very thankfull as that gave me some excitement to report on. The way to “jump start”a bike without using jumper cables is to do a very dangerous manouvre by putting the back wheel of the bike that wont start against the back wheel of another bike, then get the one bike turning the wheel of the other and thereby starting the other bike, but you need to build up speed and change gears so the wheel is spinning in 3rd gear.  I said dangerous, as should the bike turning the other bikes wheel move only slightly forward it would “fall” of its centre stand and race off hitting the cars parked around it.

Here is a video of it, but you need fast internet.

And then it was off the the High-Pressure-Wash where the bikes were cleaned, ready to be packed away after tomorrows ride, (we are going to join Pie on Tour De Studebaker.) 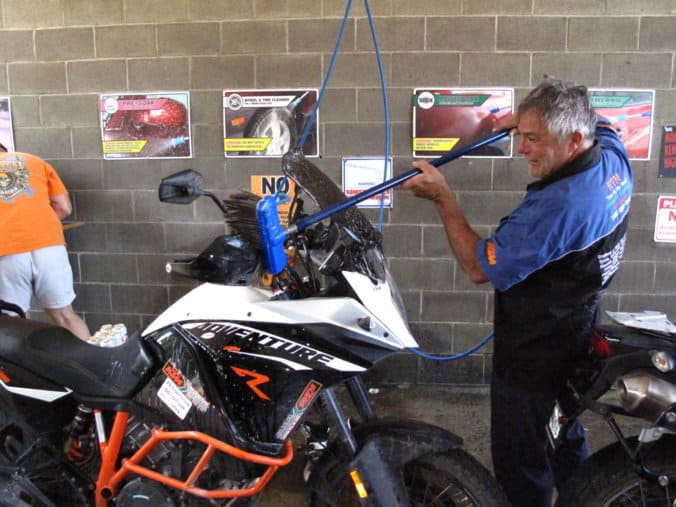 We suspected somebody’s wife who stays in Seattle left her transportation behind after cleaning it and Rocy found her broom\transport, but let me be clear, it was not one of our wives, we are not pointing fingers. 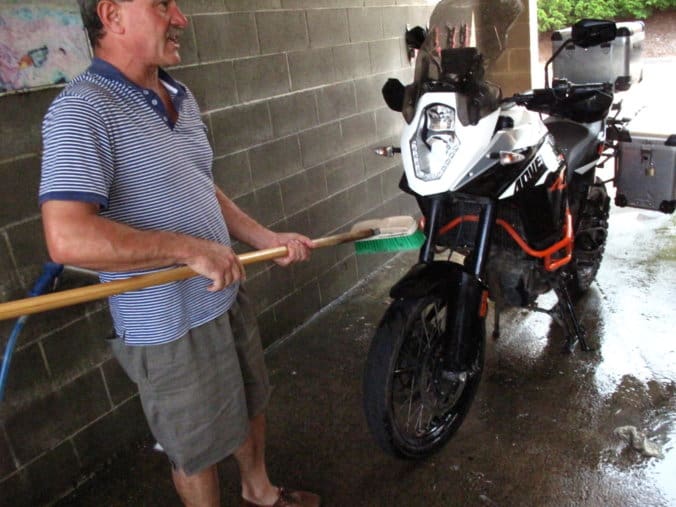 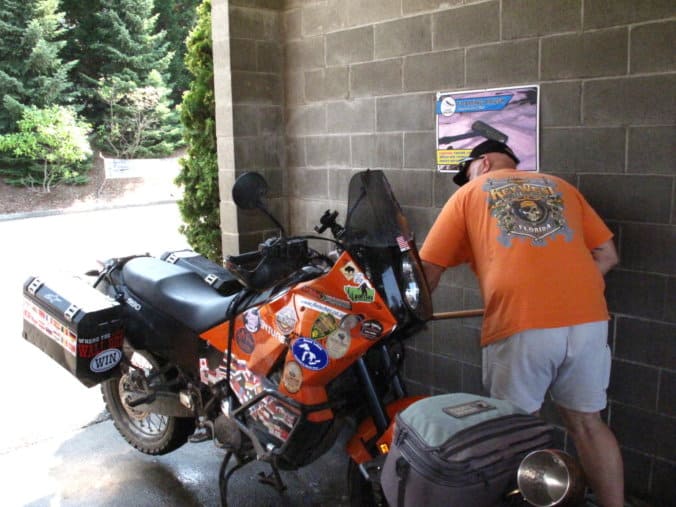 Talking of wifes, the hero of this trip for me has got to be my wife who had her birthday a few days ago and had no problem to let me come on this trip, she is a champion and she deserves a medal for sticking to me regardless of all the dreams I chase (yes I also do other things apart form this tour of the world, and she lets me.) We all wished her Happy Birthday on the 4th of August (and next year I will have to be at home on the 4th as she turns 30, has been 29 for a few years now.) Even Dog wished her a ‘Gelukkige Verjaarsdag” (happy birthday in Afrikaans, my Home Language,) but his Afrikaans is not so good, so when he says “Gelukkige Verjaarsdag” it sounds like “Go Look at Lukes Fajita” so from all of us Thea, Go Look at Luke’s Fajita!!! Lief jou stukkend !!!!