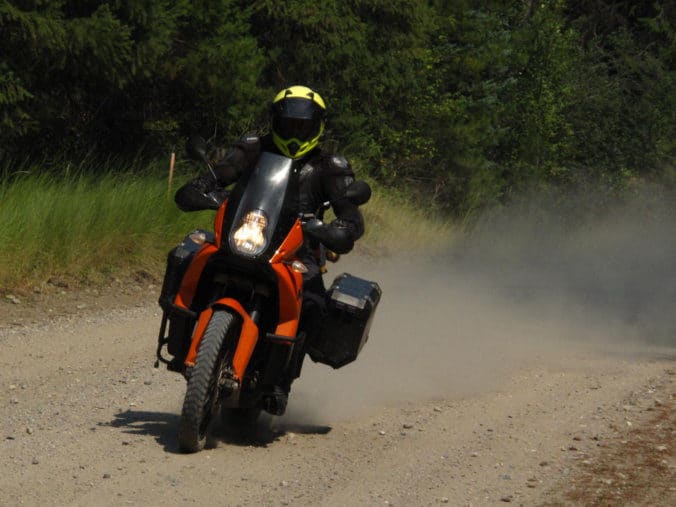 Last night we met a couple from Nebraska touring around in their 200hp Three Wheel “Bike” (it has a steering-wheel like a car but you need to wear helmets in the States where helmets are required and it has seatbelts. 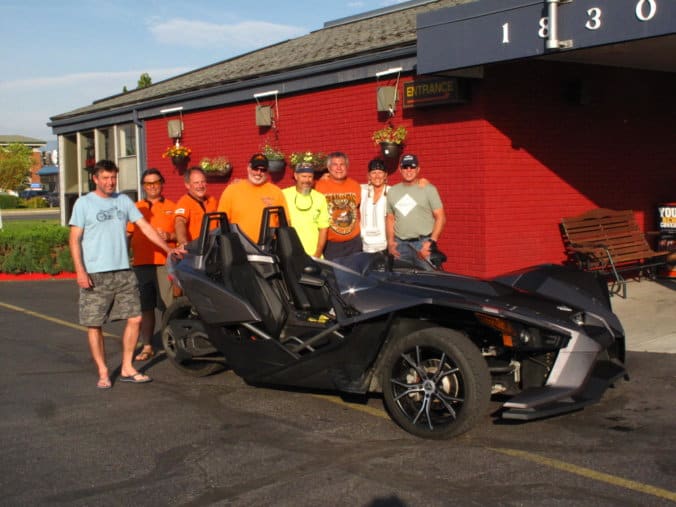 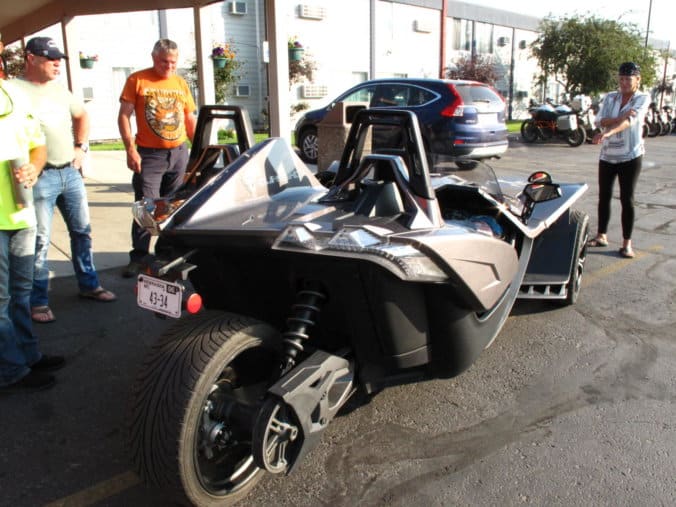 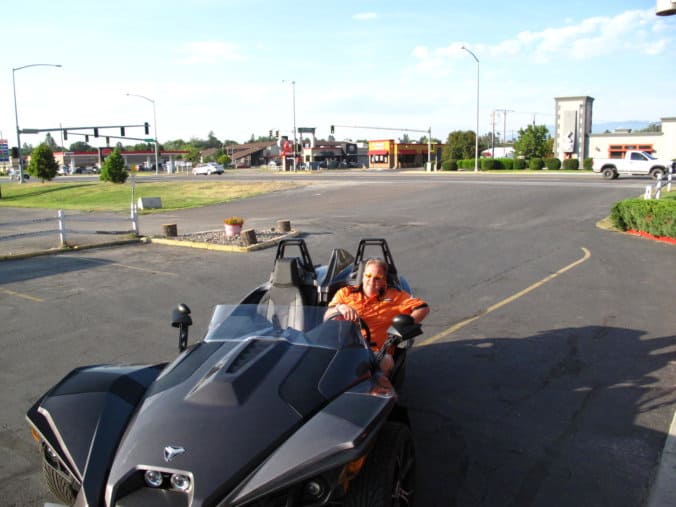 I must say that I liked this car\bike a lot, and who knows, one day if we are to old to swing a leg over (the bike) but still have a Continent to do, this could work, so maybe Australia can be where we switch over????

This morning we left and pointed the bikes West like almost every other morning, chasing our shadows as the sun was rising behind us. Again I was under-dressed and cold, and as the road-sign said, there was going to be Deer, and there were, some dead lying next to the road, killed last night. One deer was lying without its head, someone wanted the antlers, (horns,) I suspect. 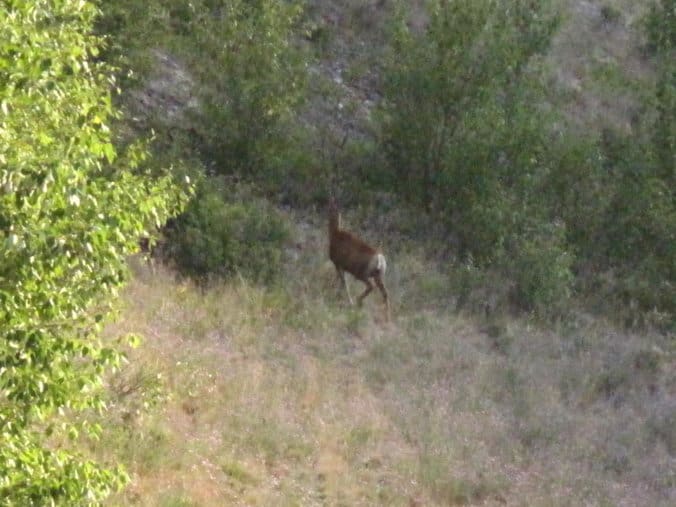 The “West 2” which we followed to lunchtime ran next to the river for most of the time. 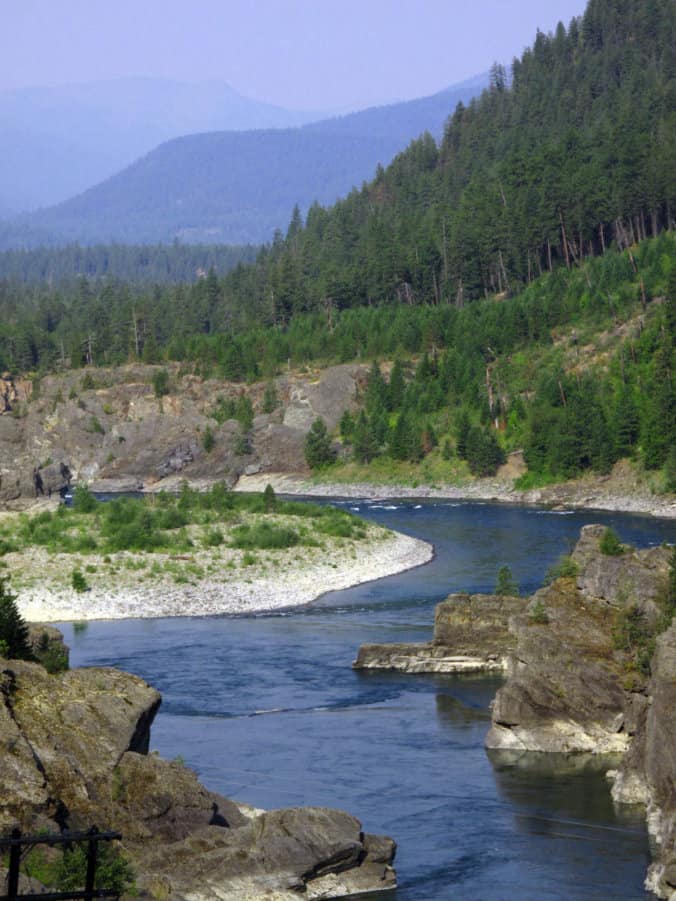 Fishing is still BIG here even though we had crossed over into Idaho. 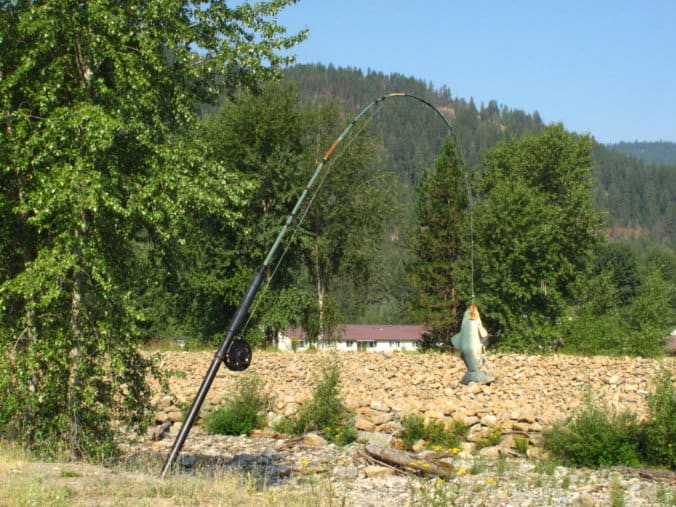 The campaign they use to get the people to drive safer is to put up a little sign at every fatal crash site, at one place there was two signs, one with 2 and the other with 3 crosses on, below two people died. 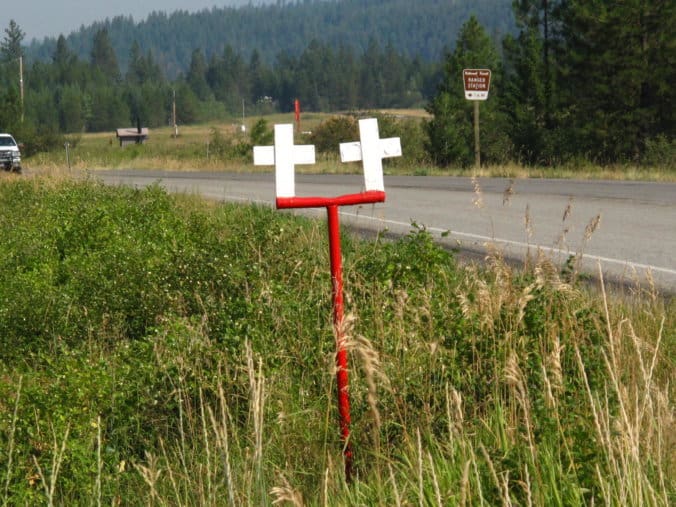 Another interesting sign before (and another after every hill,) was this one, where you pull over and put on the chains on your wheels for better grip going over the hill when you are driving in snow. 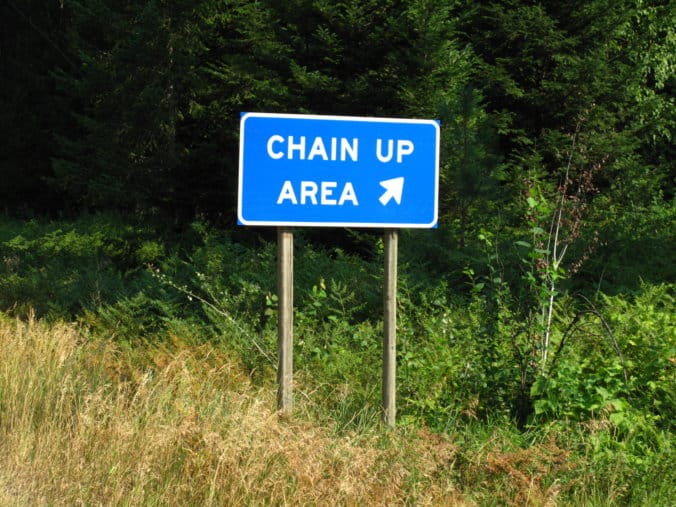 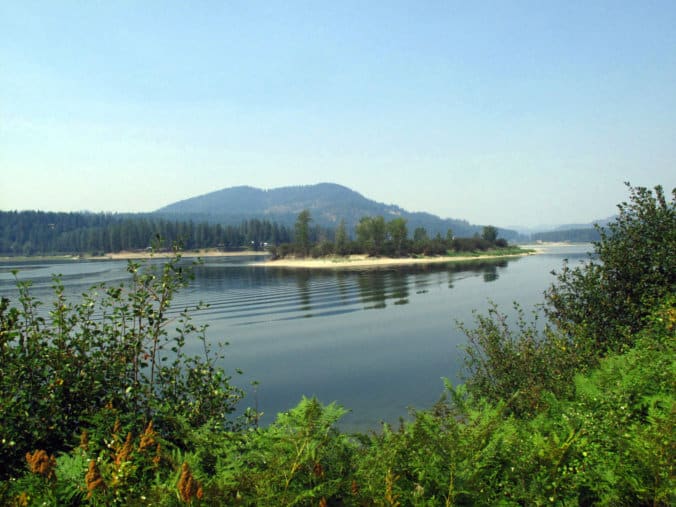 The river got bigger and bigger as more streams and other smaller rivers joined it. 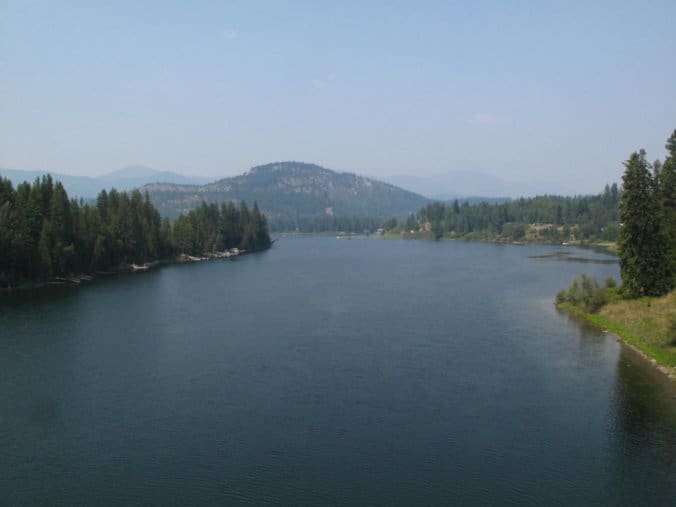 After lunch we took a winding small little road on the Eastern side of the river where we met these 2 couples touring, the men were on Harleys and the woman on another type of 3 Wheeler, more like a bike with two front wheels. 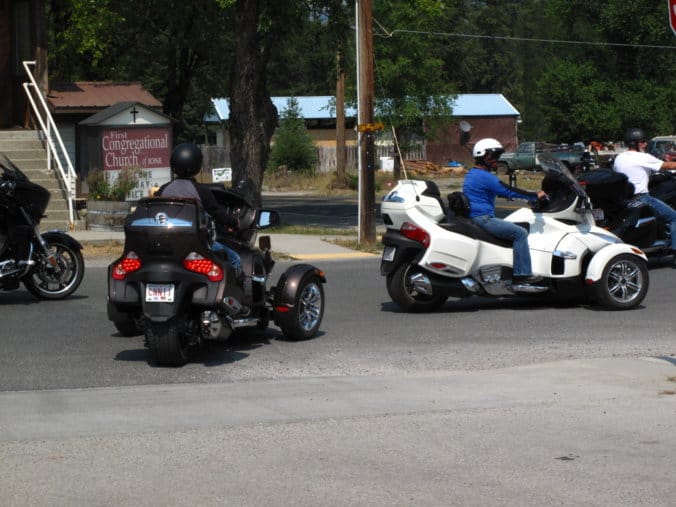 And then we found some fun. We found a gravel pass over the mountain. Most of the ride was in the forest, so the dust-cloud just hang and we had to leave a large dust-gap between each bike. We were joking when we heard the name of the pass, The “Smack Out Pass” we joked and hoped it was not going to turn out to be The Smack Down pass, but apart from a moment with a cow all went well and we had a lot of fun. 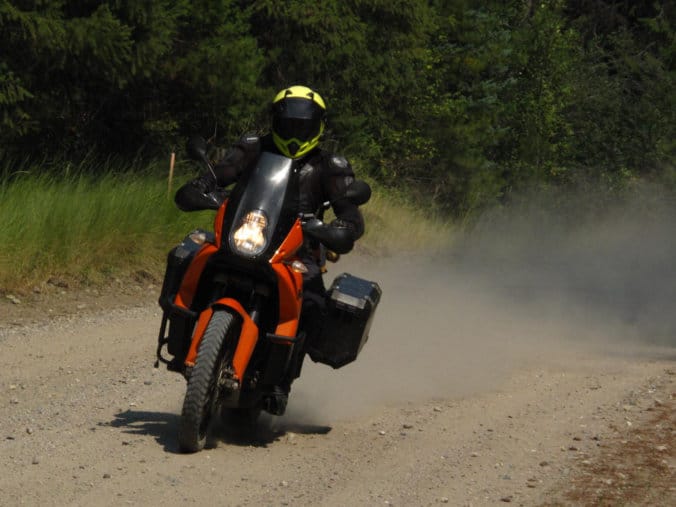 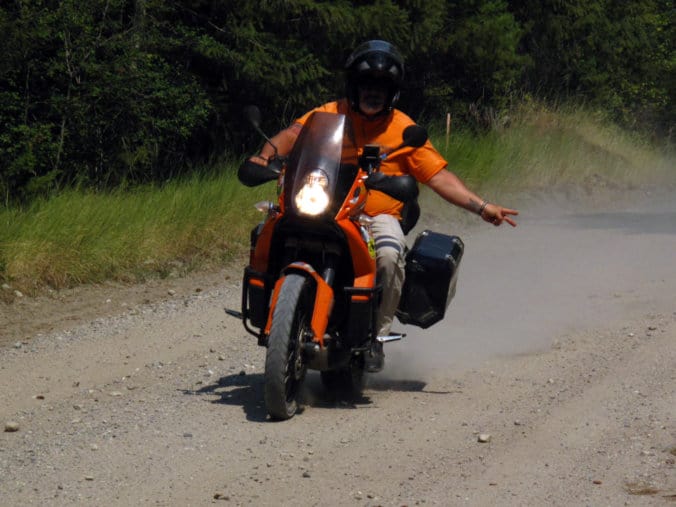 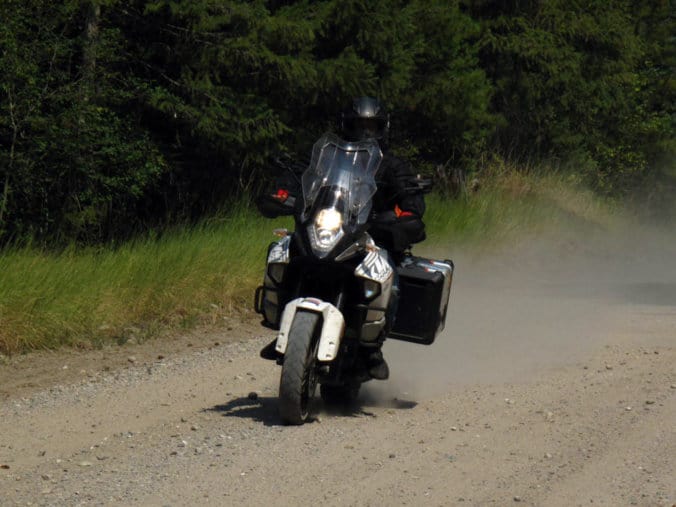 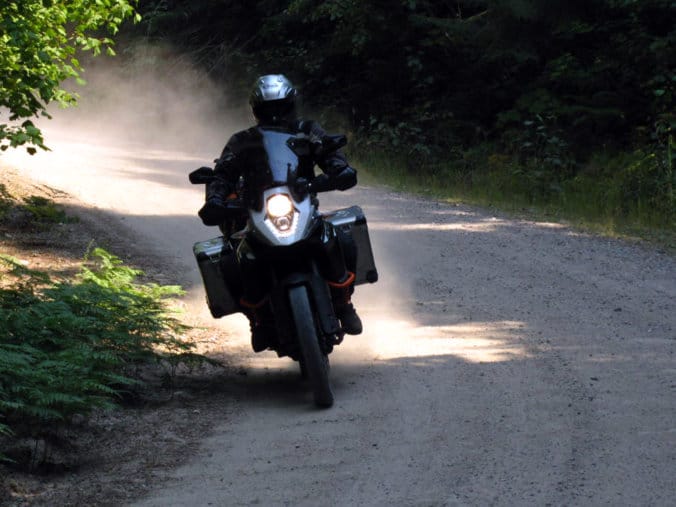 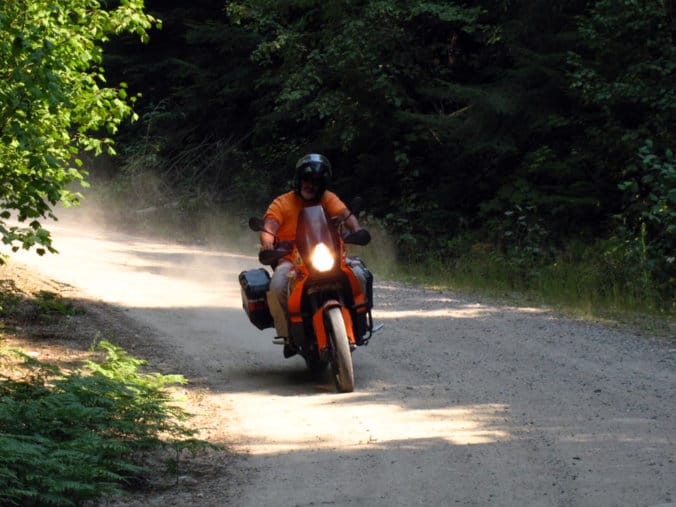 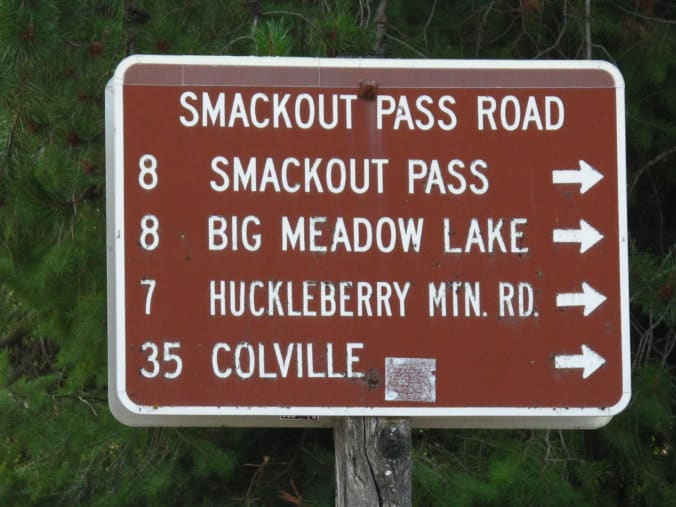 The temperature rose steadily through the day and by 12h00 we were shedding layers at ever stop and changing from long winter gloves to short light Summer gloves. At 15h00 Milsy started looking for a place to swim as we were now sweating it out in 36 Degrees, its fine when you are moving, but every time you stop you cook. 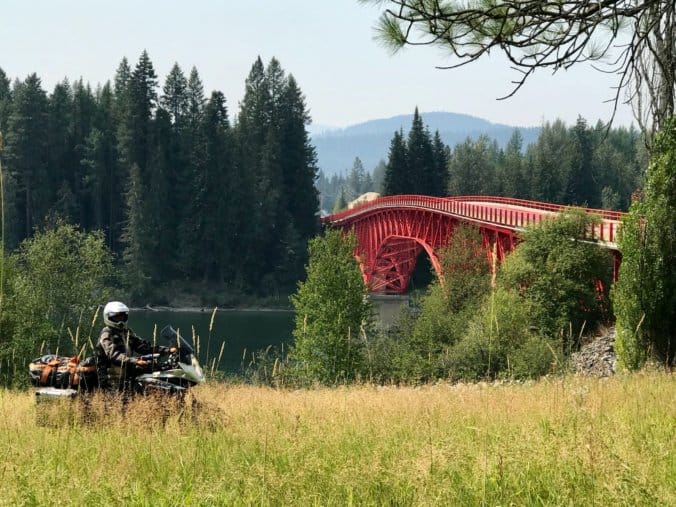 This morning we crossed into Idaho and later inthe day crossed over to Washington State, we also gained another our, we are now 9 hours behind South Africa. 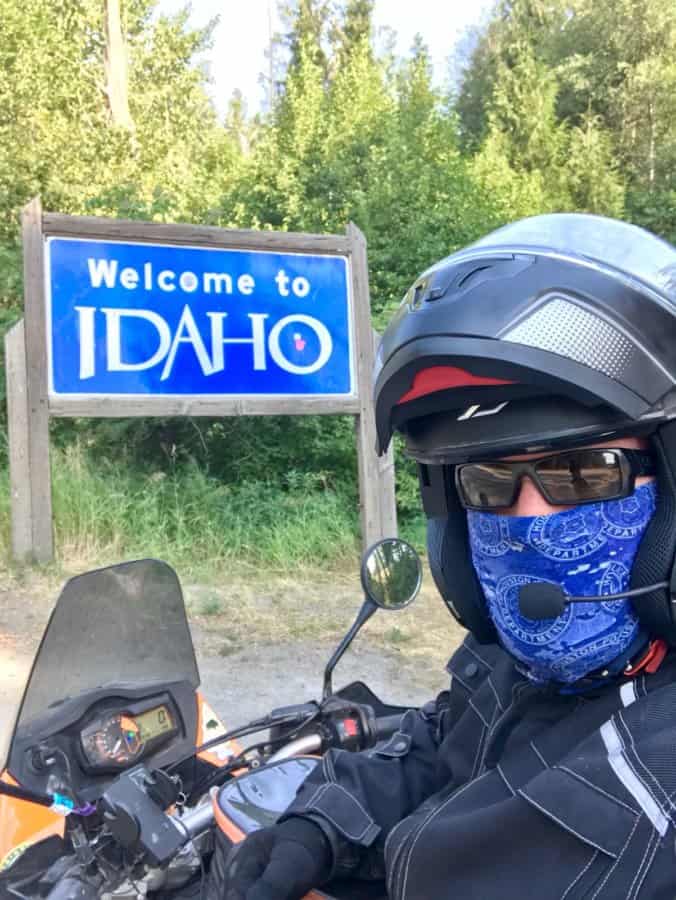 At lunch we started looking at where to leave the bikes and discovered there were 6 KTM dealers in Seattle. We plan to go to the dealer furthest away from the airport as the storage will be so much cheaper than close to airport. We doubt the KTM Dealer will be able to offer us Heated Storage so we need to be find something clode to them so they can colect the bikes one by one and service them and return them to the storage. Tex even found a ferry that will take us around the city so that we dont have to suffer-traffic.

Here is Milsy showing off

And below, video in a different format???? DadAss riding responsably, standing and riding with the ABS turned off. Gravel Riding Lesson Nr1 : When riding on gravel you should stand as the riders weight is no longer on top of the bike, making it top-heavy, the weight is now transfered to the axles, lower centre of gravity, (the trick is to be so confident that you will be able to apply brakes while starting to sit down when the cow runs into the road so that you dont lose any time in braking. Lesson Nr 2 is to over-ride the ABS so that you can lock-up your back wheel and slide it, as a small amount of gravel builds-up in front of the area touching the road and that is what helps stopping you.

Just click on this and then on the link again, I think.