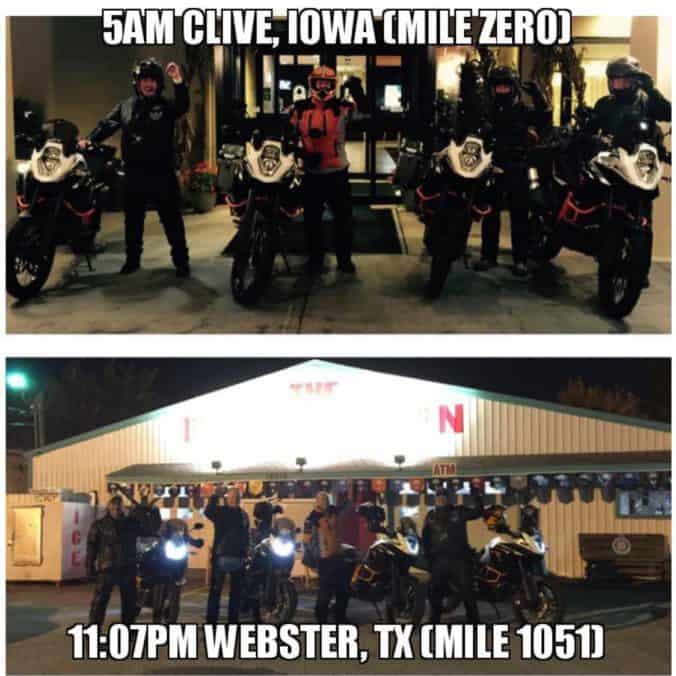 On the cold Thanksgiving Weekend, Tex got three of his friends to help him to go and collect the 4 new KTM 1190’s that we bought on E-Bay for the American Legs (as the three South African bikes could not be imported into the USA. ) You might remember Gregg from the Leg through China, we called him Dog as he loved entertaining the kids with his Dog-Mask, well, he was part of the team that flew to Iowa to go and collect the 4 new bikes for us. They also decided to do an Iron Butt with the new bikes when collecting them (that is something crazy some bikers do, to ride 1000 Miles in under 24 Hours, all in one go, it is called Iron Butt and these marathon Rides are something to brag about and some clubs even have awards for their members who have done an Iron Butt.

Well Dog sent me a few photos and wrote me the following e-mail about their ride :

Johan,
Hey there Bru, I sure have enjoyed keeping up with y’alls latest ride. It looked like a blast and awesome time.
I thought I’d share a little story about our trip delivering y’alls new bad-ass bikes from Iowa to Texas.
Let me say that you guys are in for a treat. These KTM Adventure Rs are amazing machines. Absolutely incredible in every way.
The first thing we did was address the possibility of “road gremlins” (see attached photo) All the bikes have their own bell. A gift from the Texas Boys that delivered the bikes. Y’all are now protected !!!
We left Iowa at 5am in 32 degree F  weather. We only rode about 30 miles before we found a warm gas station and some coffee.
We stopped two more times in a short time to keep our bellies warm with coffee.
Eventually Mark said we needed to put a big dent in some miles. So we started clipping off full tanks of gas which were a little over 200 miles. The bikes ride so smoothly.
We arrived in Texas at a decent temperature and it only got warmer as we moved south.
Finally we arrived in Webster, Texas at 11:07pm. It was 61 degrees F.
We thoroughly enjoyed delivering them. They have the proper break-in miles and are ready for their first service.
I can’t wait for April and for y’all to begin the North American legs of y’alls adventure.
Later Bru !

PS: be ready to throw a fish from Alabama to Florida 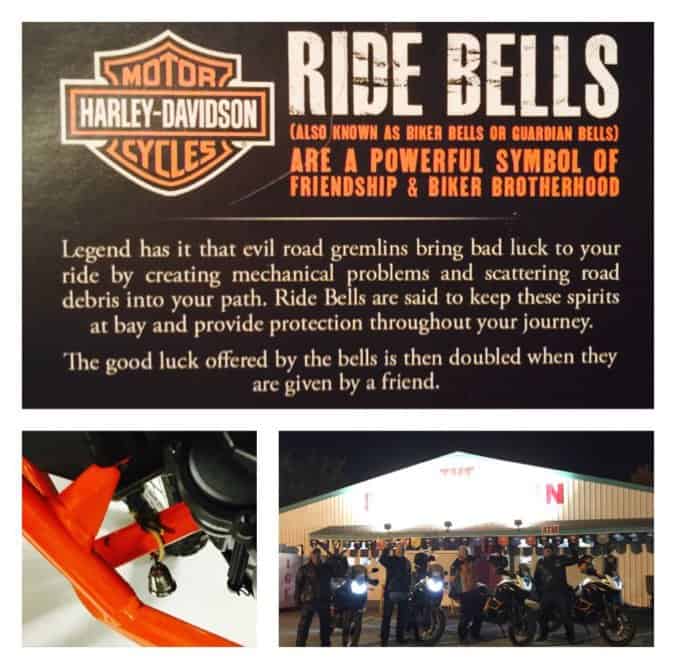 Not so sure I want to put my trust into a Bell, but thanks to Tex, Gregg and the other two friends, (I was going to ask Tex for your names but he is in China and fast asleep by now) for collecting the bikes.

So the bikes have now been run-in and are currently getting their 1st Service and are being “kitted-out” with Panniers, GPS’s and a few other small things and they will be ready for us when we arrive in Texas on the 21st of April. Tex has been planning a very interesting trip for us (including a stop-over at the annual Mullet Chucking Festival where you throw a fish from one State to the next,) and we are positive that the ferries will still be running to Cuba and that there wont be any walls blocking our route.

So now we start with the preperations, (the flights have been booked,) the visa’s are next on my radar and I will need a set of riding-gear in the USA. I will let you all know a little more about the interesting places on our route for Leg 11 closer to the trip.

All of us on the KTM Tour of The World : We wish all of you who reads our Blogg the absolute best for 2017, may it be a great year for you and your families.

U.S.A Here We Come (some already there)