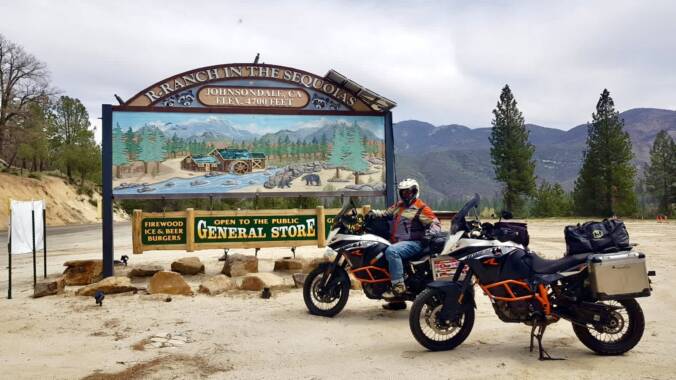 We made it to Las Vegas, we are meeting at the Pool Bar at 19h00, I need to push to get this Blog out before then.

I now hear all my friends are sleeping (except Peens who went looking for them, even the young Danny Boy is resting.) So they will be strong tonight, me not so much as I am dedicated to all of you, so here it goes:

Last night already we started celebrating Rockies Birthday. We went out to eat Italian food and then went for a ‘Loop Dop” (Nightcap) at the bar next door. This little town has 1 Petrol Station, it has 4 Motels, One American Diner (where we went for Breakfast this morning,) and maybe 4 other types of restaurants, a Brewery and a very large community that stays in RV’s or Trailers (caravans as we would say, but biiiiiiiiiiiiig caravans, as covered in ky earlier Blogs of 2017\2018 when we started riding in America.) So the Sportsmen’s Bar was pumping, mainly because it was the only other bar that was open, apart from the Brewery, but also because it was Karaoke Night.

I did not even hear how off-key the aspiring Rock Starts were singing, I was absolutely blown away by the one guy sitting at the bar, with his girlfriend I later found out. Here next to me in the bar was a real “cowboy” (Danny Boy also had lots to say about me using inverted commas, not sure how that changes the meaning of words, but he probably knows as he had a Private School Education (oh yes, I also should use less capital letters he says.) I sneaked this photo of him: 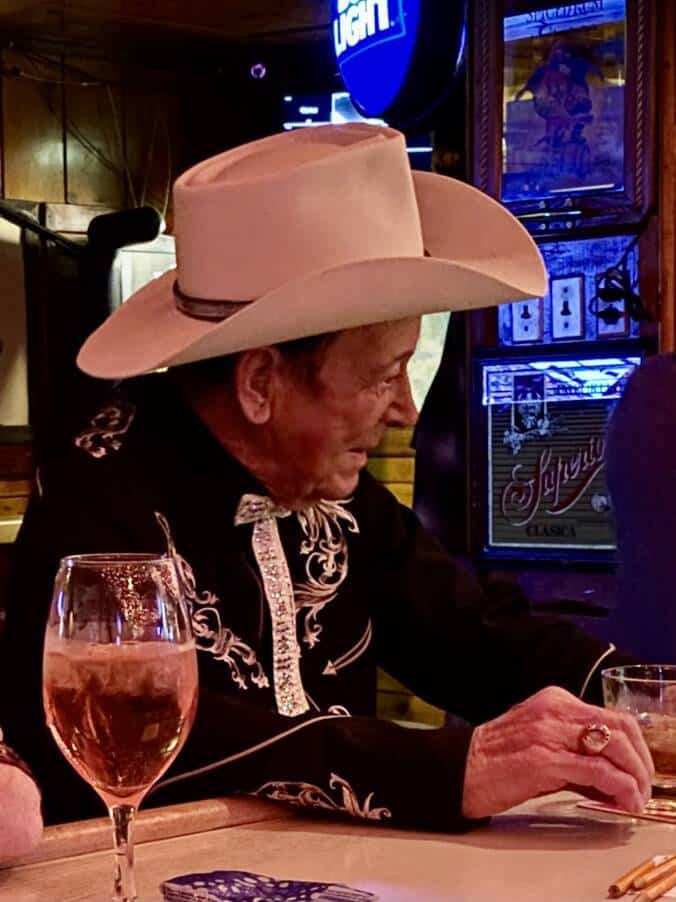 I then turned to the bar lady and asked her if he was a local and did he always dress like that and did he come to the bar often? She informed me that he was a famous Movistar, Roy Rodgers, his age was 88 years old, who  came every week for Karaoke as he loves singing. So I Googled him and found these photos:

The only problem was that according to Professor Google, Roy died in 1998. So I asked the bar-lady if she knew he died and she said yes, “but he believes he is Roy Rodgers and it harmless, so we all just pretend we did not know.” Then I spoke to them and we became friends, sort-of as he was not just dead, he was also deaf in both ears and could not really hear, which was evident when he took the microphone and sang at least 6 songs throughout the night. But as soon as he finished a song the crowd would cheer and pretend he sang beautifully. 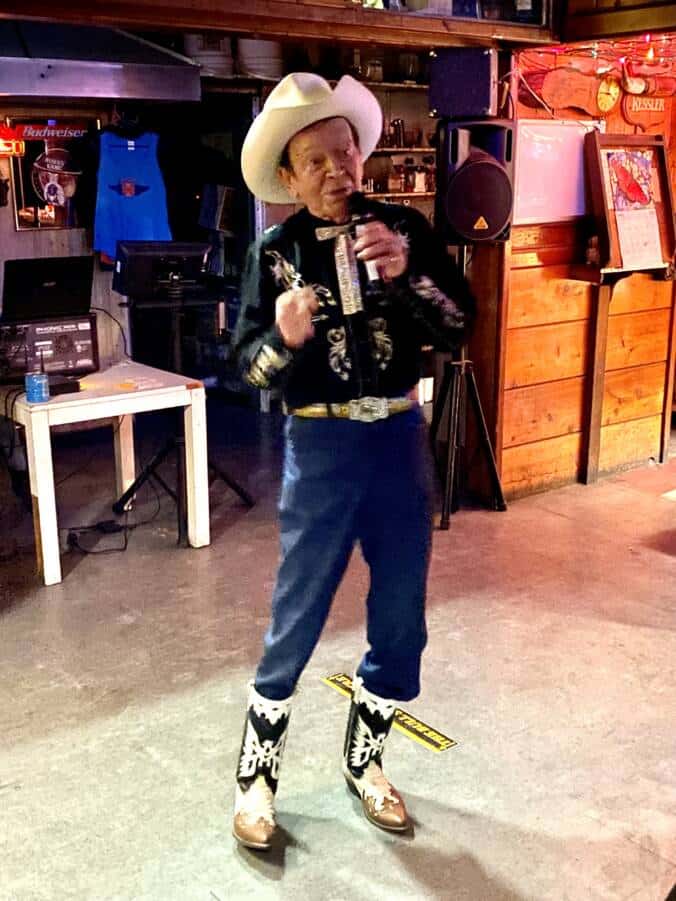 After “Roy’s” dismal performance it was open-season, no one could be more off key, so Danny Boy did his rendition of Journey’s song “Don’t Stop Believing” which he sang very well, although his Back-Up Singer was rather useless and spoiled the entire performance. 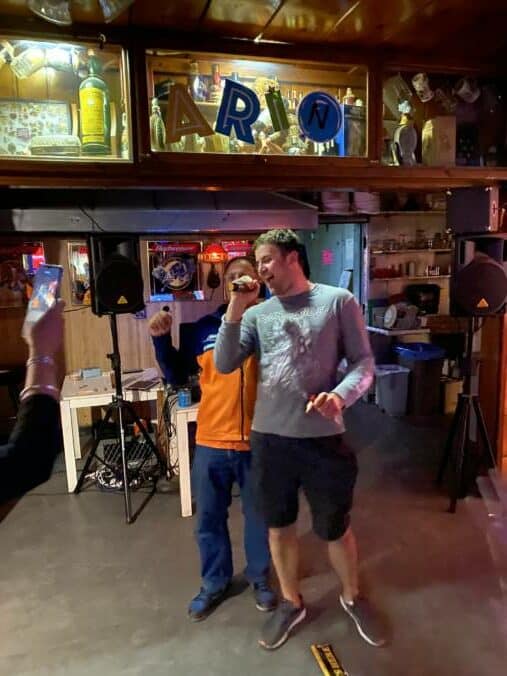 Danny Boys Back-Up-Singer gave me the courage to entertain the crowd with my rendition of “Waiting For A Girl Like You” by Foreigner, I think I gave a star performance as I had the people on their feet, running for the doors before I even got half way.

Some of Pies family has been complaining that it looks like I am angry with Pie as he has not featured onto many photos, so here is a photo of Pie on his swing at Cheryl’s Diner. 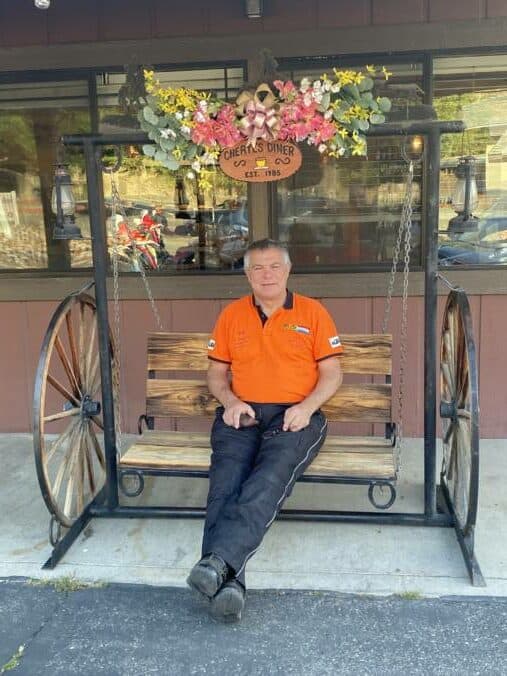 We had along day, but the road was straighter today, we averaged 117km per hour. As we dropped down into Death Valley the temperature rose from 22 Degrees to 38 Degrees within 15 minutes. Death Valley was a bit of a disappointment, which I suppose it would be if one has been through the Namib Desert. Most of it looked like the Karoo, but then the landscape changed and there are hundreds of Joshua Trees, and then the trees gets less and less and eventually there are no trees to be seen, only camel-grass, and then that disappear and you only have stones. And then you drop down into the valley, (there are actually two valleys that we rode through, so you would drop down to below Sea Level before climbing over a little mountain, up to 1500 Meters and then down the other side to Below Sea Level. The going up and down resulted on some amazing twisties, for the 3rd day in a row, but not nearly as much as yesterday. (Yesterday was constant left turn into a right, into another left into another right.) 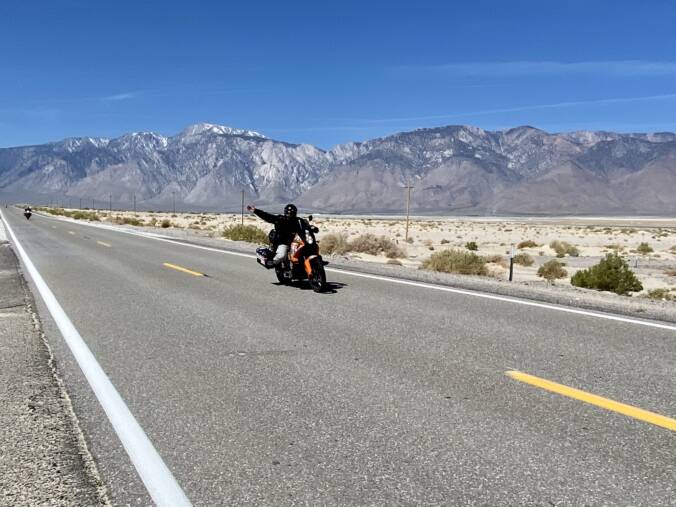 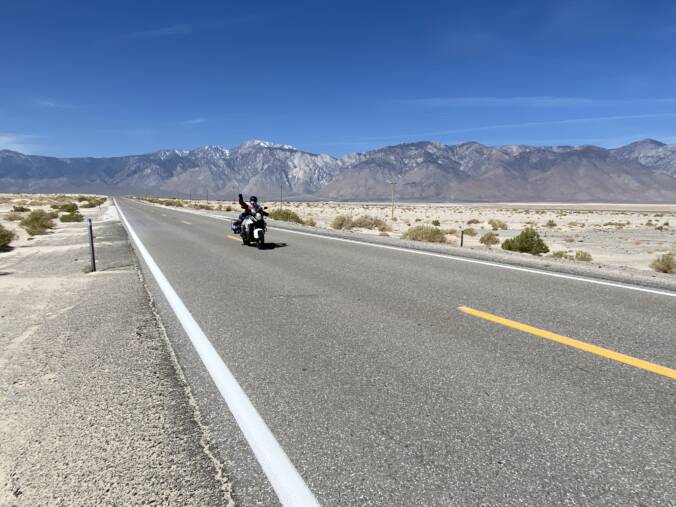 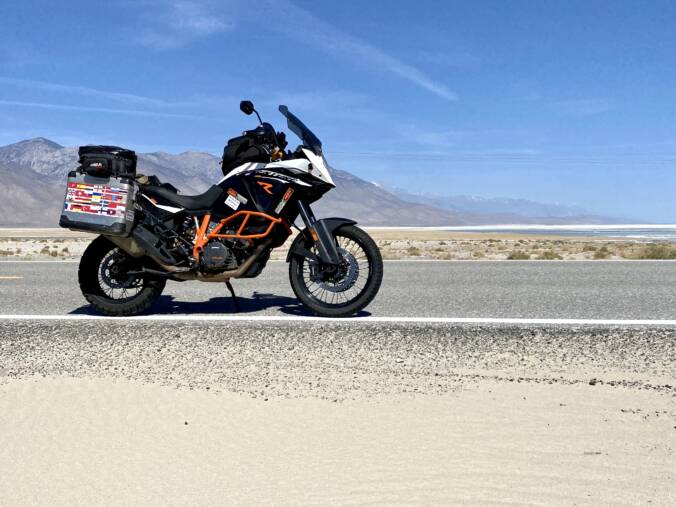 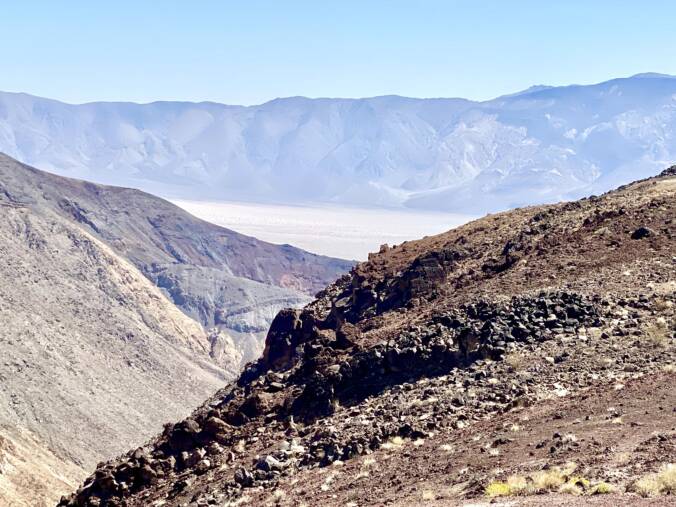 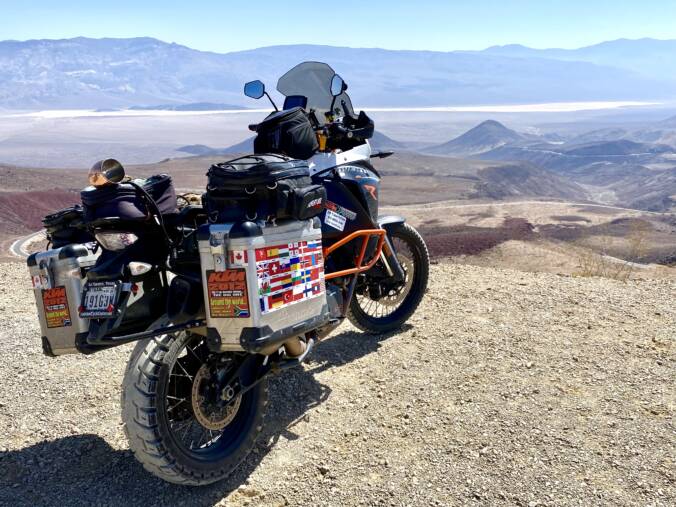 Note the road in the photo below: 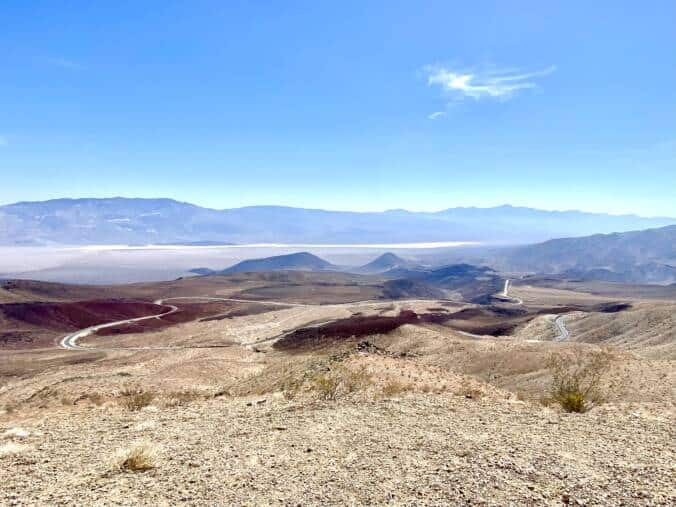 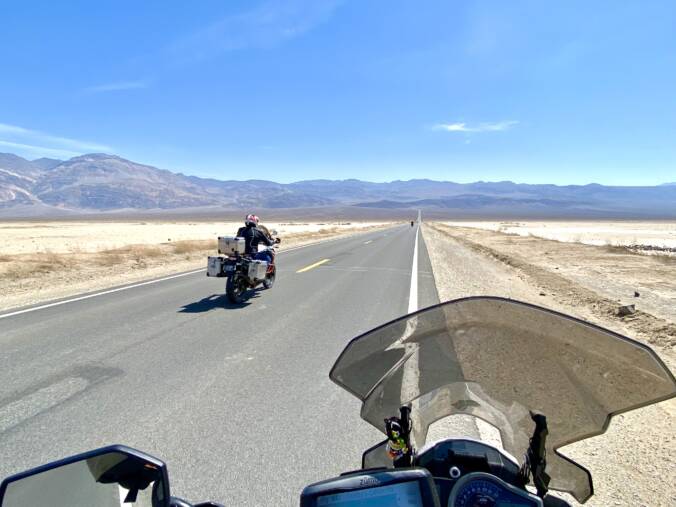 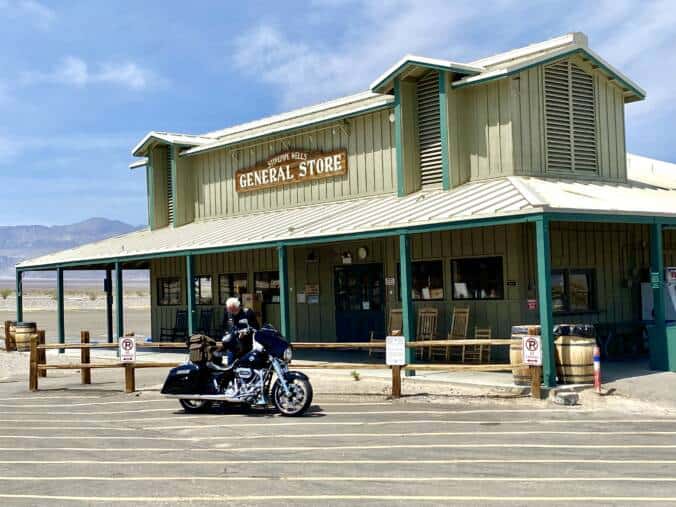 We met this lady riding her BMW from San Diego all across the USA to be with her husband, she ride with us for a while before our roads split. 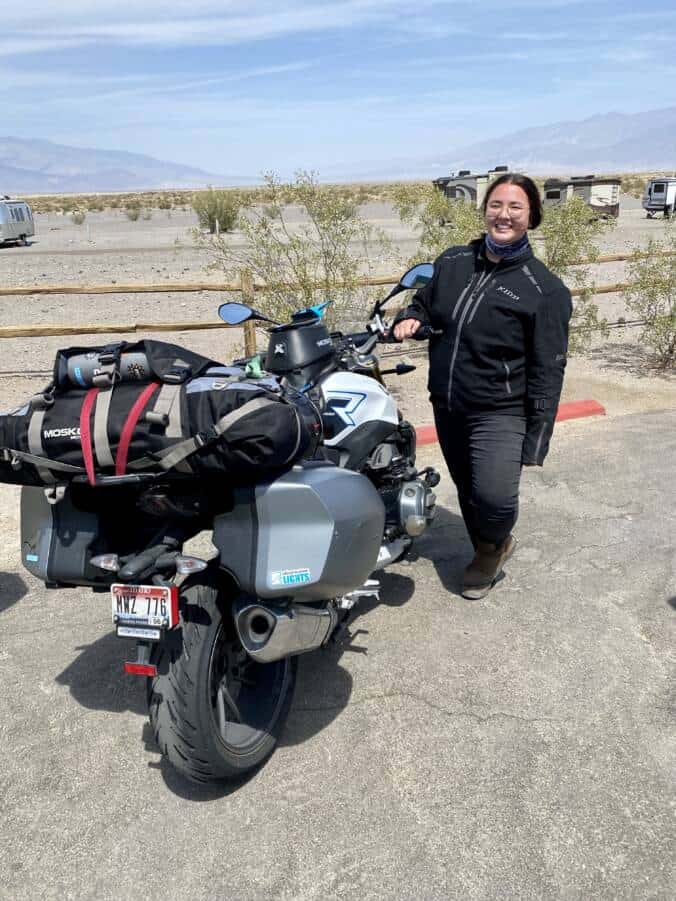 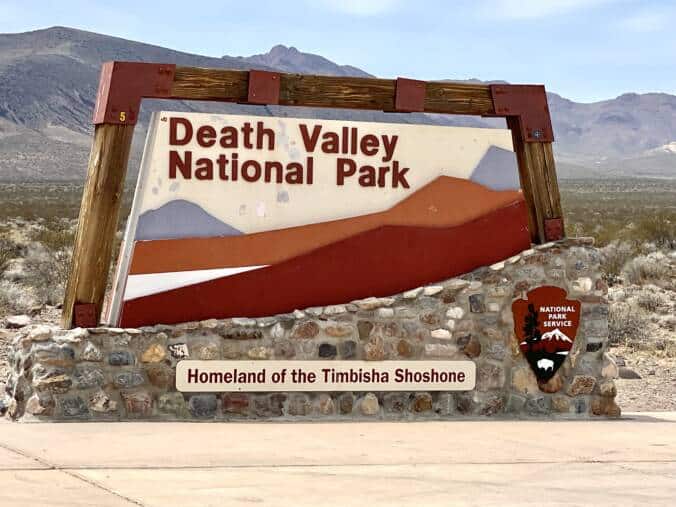 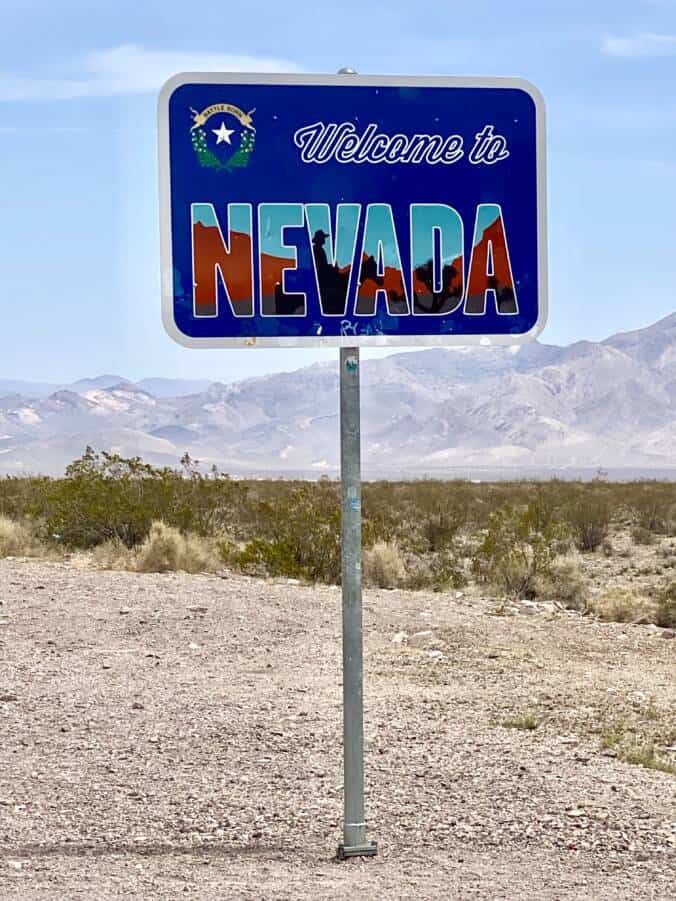 My Male Model Milsy posing at the Joshua Tree: 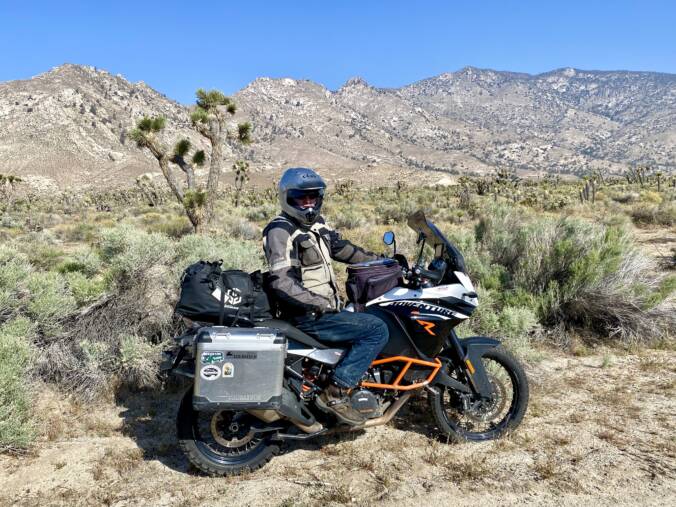 This dud in the photo below had groot stront!!!! Hope he had water, his bike refused to start and he had very little tools and he was trying to fix it, (not called Death Valley for no reason, might read about his “luck” in the morning papers.) Hope Murphy has now jumped ship and we can continue without any further miss-haps. 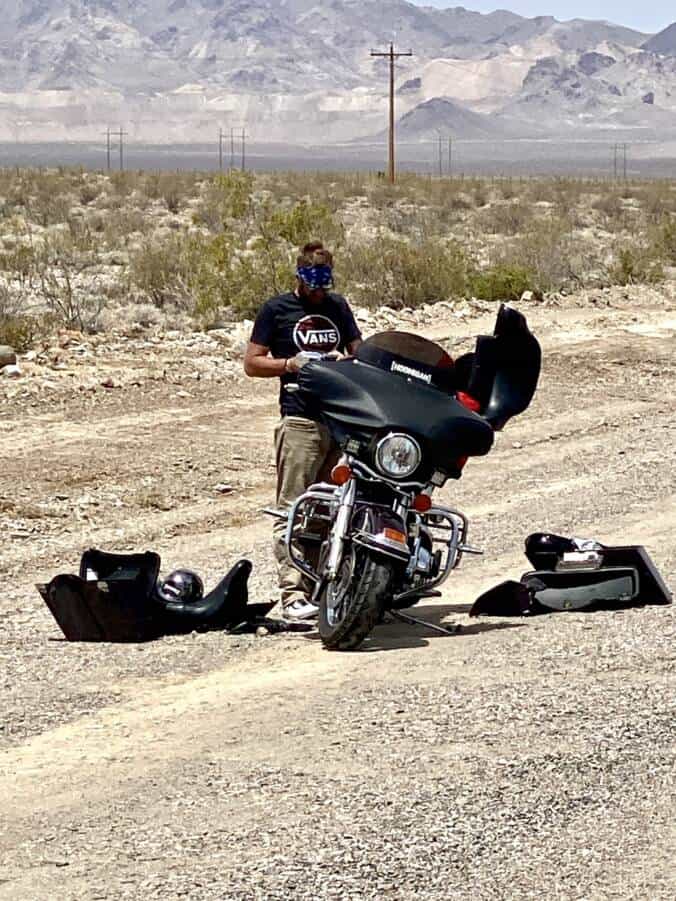 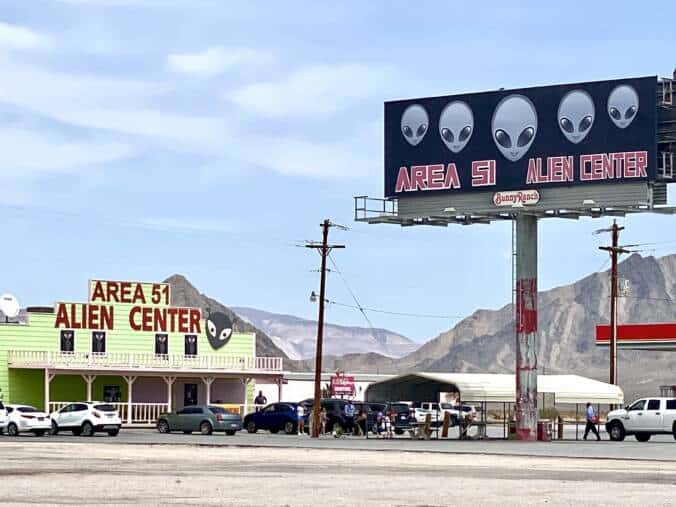 We are staying at The Flamingo, one of the oldest Hotels in Lat Vegas. Behind our bathroom door a a collage of old photos showing how small the original hotel was. It was built by the Mafia to launder money and run by Bugsy Malone, but the hotel did not make money and the mafia then “plugged” him. Pie was in Las Vegas in 1981 and he tells me it was literally just a strip in the desert with a few hotels on each side of the road, today it is built-up with suburbs for 25km riding into Las Vegas, and there is a new strip and an old strip and a mono rail and Apps you download telling you where the cheapest beer is, and where to get the best deal on food and where the Jackpot is highest and, and and. 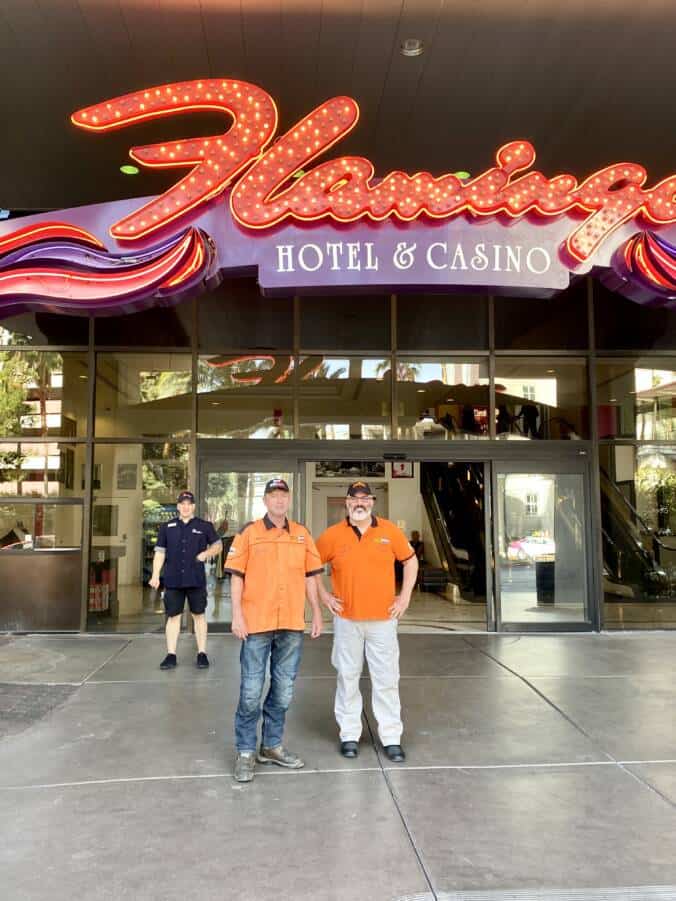 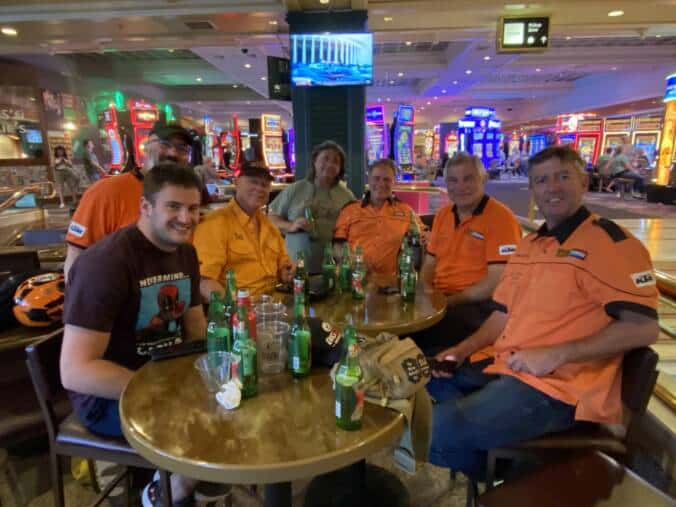 This Flamingo hotel has 3460 Rooms, but the MGM Grand next to us has 6852 rooms, so if there are only 2 people in a room (and most rooms has two Queen beds in, so probably more on average than 2 per room,) that means over 13 000 guests, that all need food and drink and toilet paper and their rooms to be cleaned and eggs for breakfast and lots and lots of ice, no wonder there is an entire city now where all the people stays that works here.

So no wonde, this was the line to Check-In : 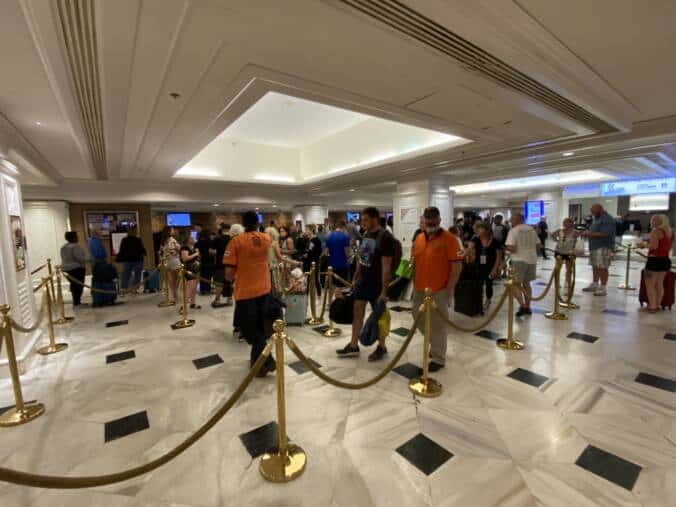 Every where you look there are signs and billboards telling you what shows are on, and your phone never stops Beeping with specials on food or drinks. The 1st beers we bought cost R150 each, but we now know where the beer costs only R60. But if you gamble you drink for free, so I have a plan, hope it works.

But as they want as much gambling, they don’t want to offend anyone with money in their pockets, so smoking is allowed everywhere.

But there is a catch, the accommodation is the cheapest it has been on the entire trip, yes. they capture you with their own little plan: You cant book for 1 night, but if you book for two nights it only costs $49 per room per night, that sleeps 2 people. So if we stay two nights (and we only planned to stay one night as we are already behind schedule with one day,) it will cost Peens and me each R355-00 per night, half the price of a guesthouse in RSA. 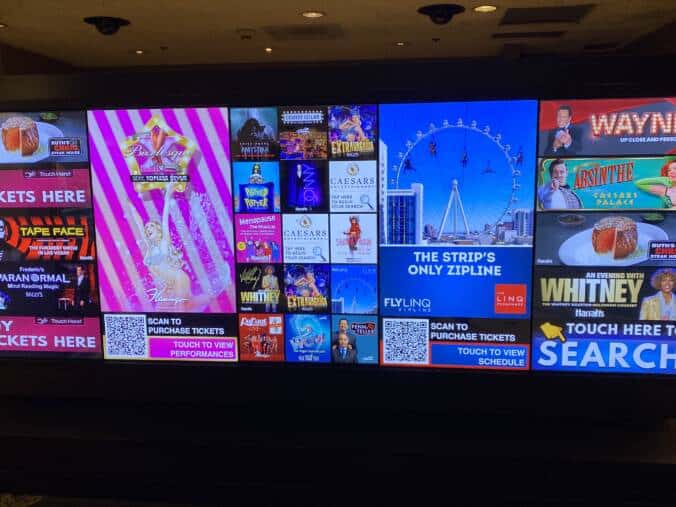 After waiting in the line to Check-in I was met very friendly by the receptionist, which soon had me hot under the collar: 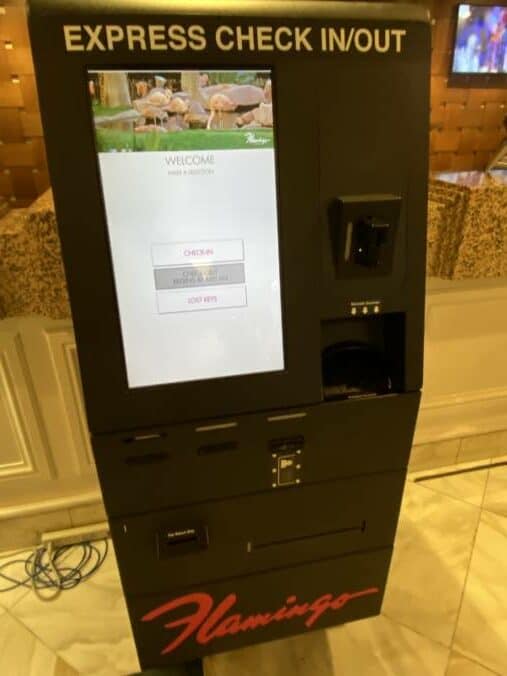 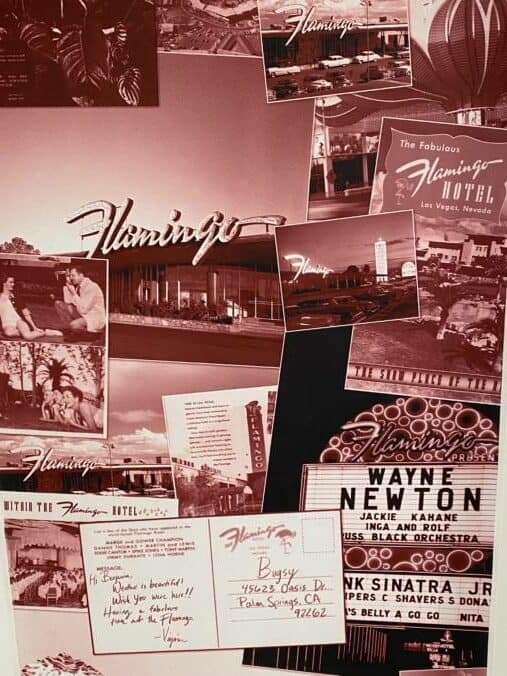 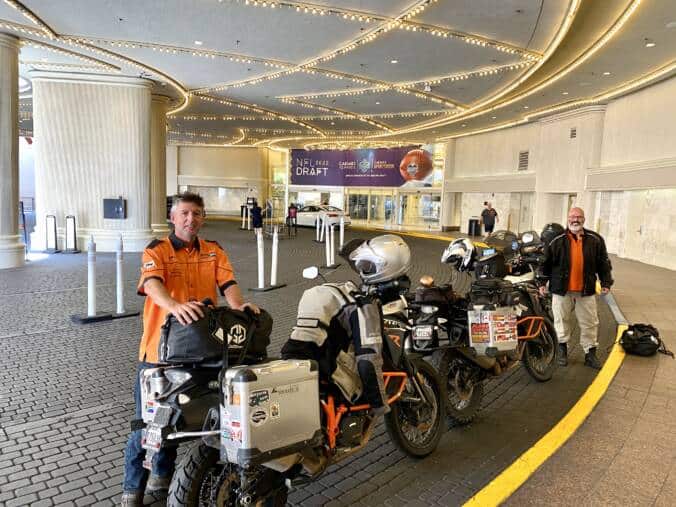 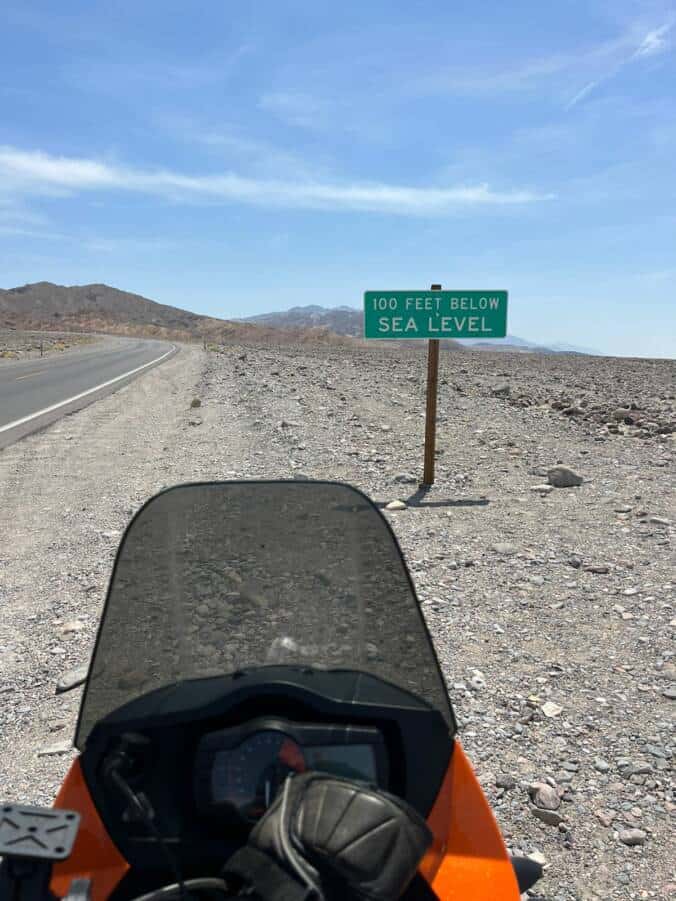 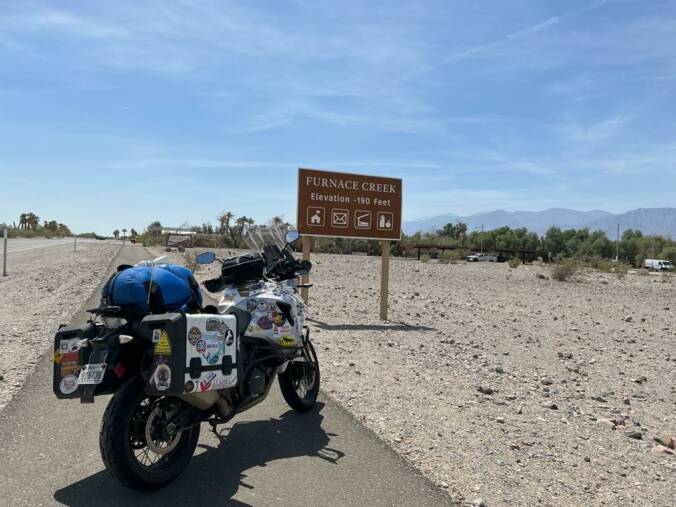 As I learnt about the Fake Roy Rodgers, we asked Prof. Google a few other questions and have learnt that we gave money to another fake, in San Fran, remember the  “Last Surviving Inmate of Alcatraz” well turns out this guy in the photo is the brother of the real guy, which died long ago, but the younger brother took over his older brothers “business” and book and life goes on, the money rolls in. I thought he looked too good for 89. 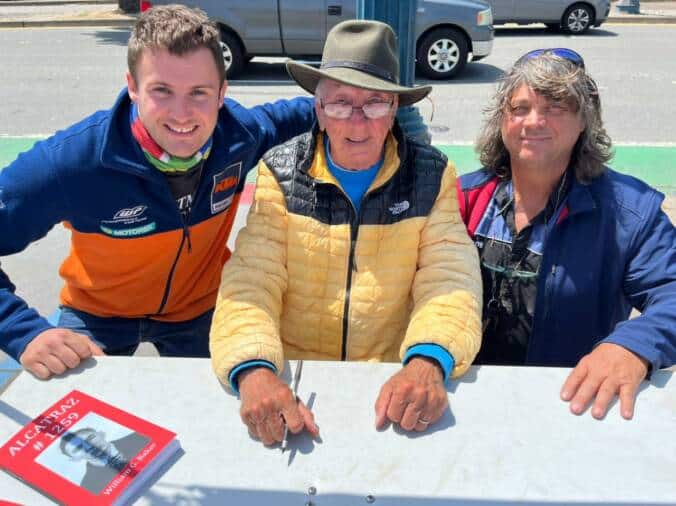 A photo of yesterday Milsy took of me and DadAss :