Yesterday I ended-off the Posting with a question, “how low can we go ? ” and it seems the answer is “much, much lower.” We always joke and call this bike trip the Oros Trip, (named after the cheap orange kiddies cool-drink cordial we have back in RSA, (Republic of South Africa) and it is actually a joke we share with Pie, he used to call his children and their friends into the kitchen before they went out to dinner at a restaurant and give them a very weak-mix of Oros, once they had finished the drink he poured them another, and then another, and when they said that they could not drink anymore cool-drink he would say “good, so only one Coke for you tonight at the restaurant and no expensive Milk-shake or Smoothy.”

We think it only lasted a few years as the kids must have soon worked out that the expensive bottle of Red Wine he ordered was far more expensive than a milk-shake, but it is the principle he was teaching them, and although we joke with him, I believe we taught our children the same values, but just not in this way.

So he did the same to us from the very 1st trip, we first have to have a drink or two in our  hotel room before  we can go out (bought from the supermarket or petrol garage and smuggled into the hotel,) and then we would eat some biltong (Jerky) which we brought with from home, and then we would go out, and then he always raise his eyebrows if we even think of going big with a steak etc. So the Oros continues, but is there a product called Oros Light? We might have changed our tour to the Light version of an already cheap cool-drink.  This is a photo of the Bates Motel’s swimming pool, which is not ready for the holiday season starting tomorrow, (and has not been ready for several years.) 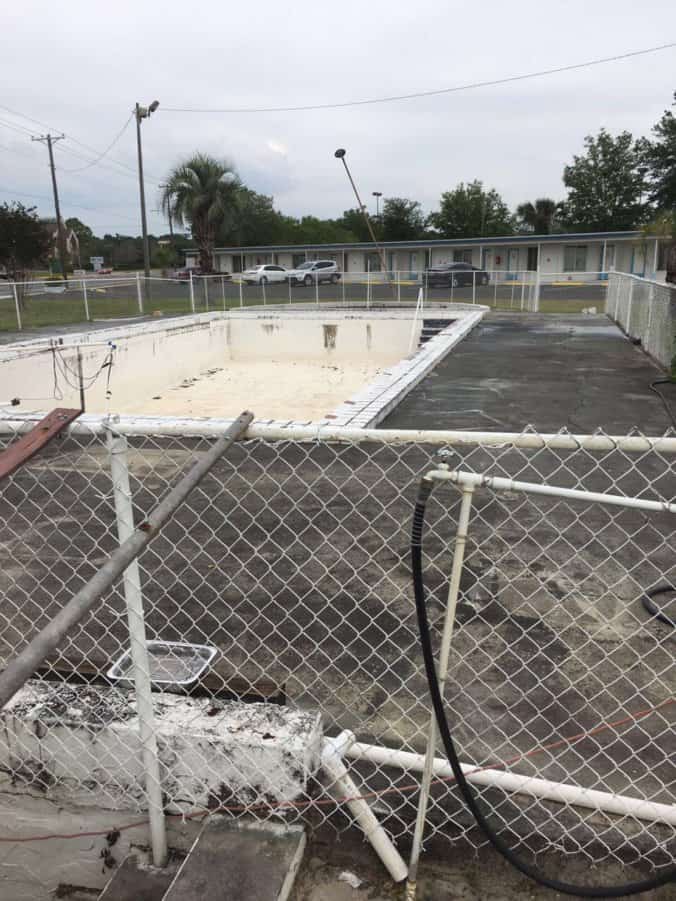 But today I actually did have a swim, but not in this pool, but more about that later.

This morning started early, we started the bikes at 6h30 and then rode to the petrol station where we filled up, as we were leaving Rocky’s Computer on the bike was very un-happy, she had an issue with his back-tire pressure, it was at 2,2 Bar and as his bikes Traction Control was set to Street Setting she decided that the back tire pressure had to be at 2,3 Bar or over, so Peens and I waited for him to add some air. When we rode out of thew Gas Station all the other 4 bikes had left without us. I looked at my GPS and she told me to turn left and head South in the direction we were going and the direction the next stop-over was, so South we went, but the rest of the group turned North, to then turn East, to then turn onto a Hi-Way to head South. Long story short, we figured out this mistake when the 3 of us stopped for breakfast at another typical American Dinner (we also ate dinner the previous night as such a Dinner.) The waitress was very entertaining as well as the other patrons and the top-ups on the coffee was frequent and the portions of Hash-brown and crispy beacon did not disappoint. We eventually joined-up with them after having the most amazing ride on the back-roads, winding through forests and passing through all the little towns, all the residents still fast asleep.

Dog took some photos while riding (if a policeman can do it we can probably also now start doing it. Note Tex’s new bike, and Milsy’s way of pacing is similar to mine, everything we could need and a small kitchen sink in there : 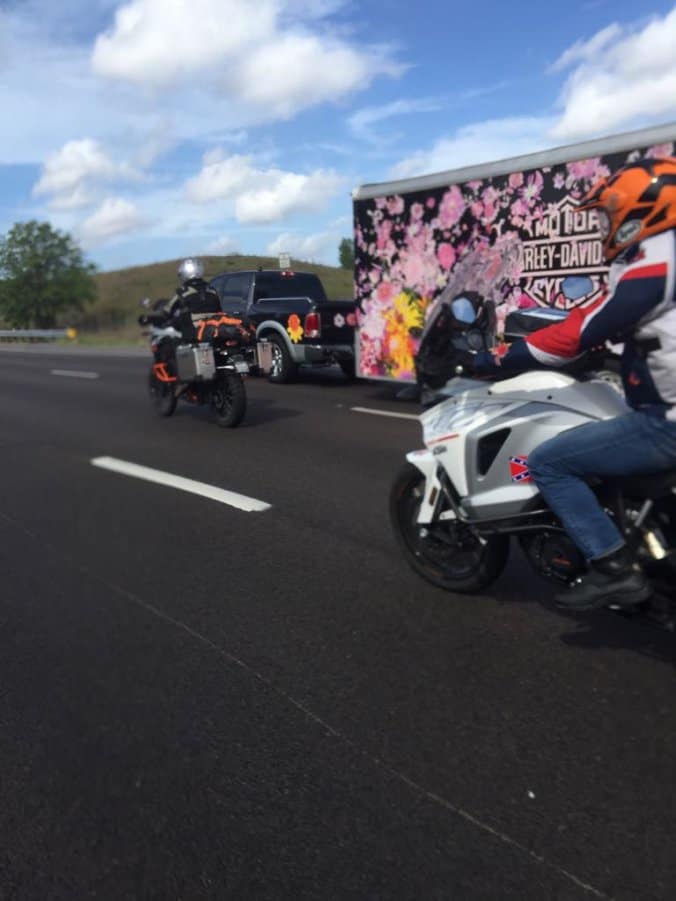 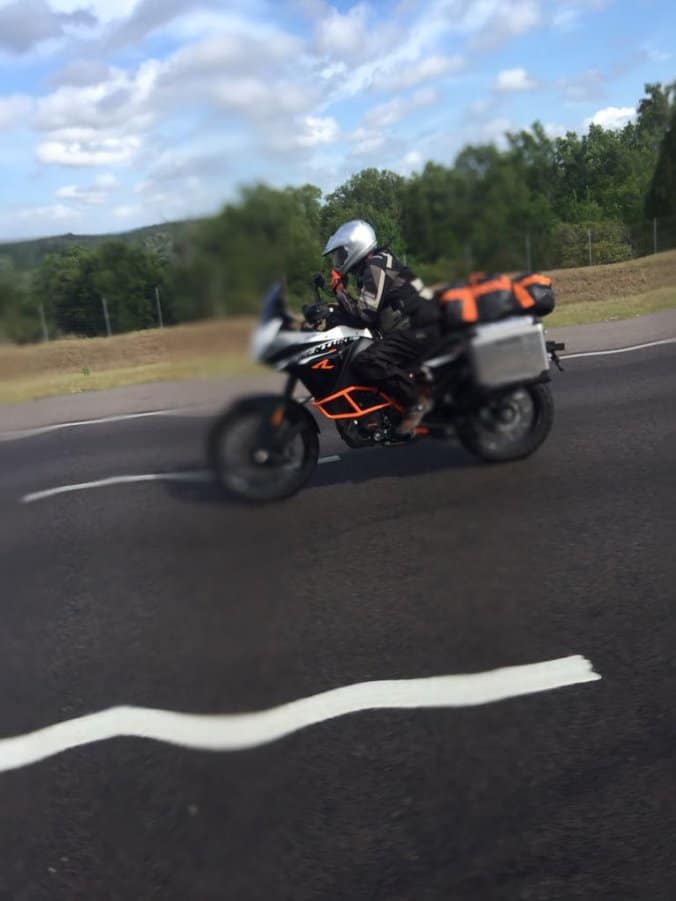 We then arrived at Tex’s family, he has two cousins who emigrated 26 years ago and we had lunch at the one cousin’s house. An absolute feast was prepared, from Lamb Chops to Chicken Kebabs and a selection of salads. We then had a swim in their pool and had a few Beers. Their hospitality was top-notch and we immediately felt at home. Their house is on a fresh water lake and note in the photo below the “Lanai” in the background, (yes this Blogg is not just entertaining it is also now educational.) In RSA we would have called it a “Solarium” if it the frame was covered by glass, but this frame is covered with a type of fly-mesh or net to keep all the insects and Mozzies out, and most of their neighbors also has them, (those that wants to sit outside I mean.) 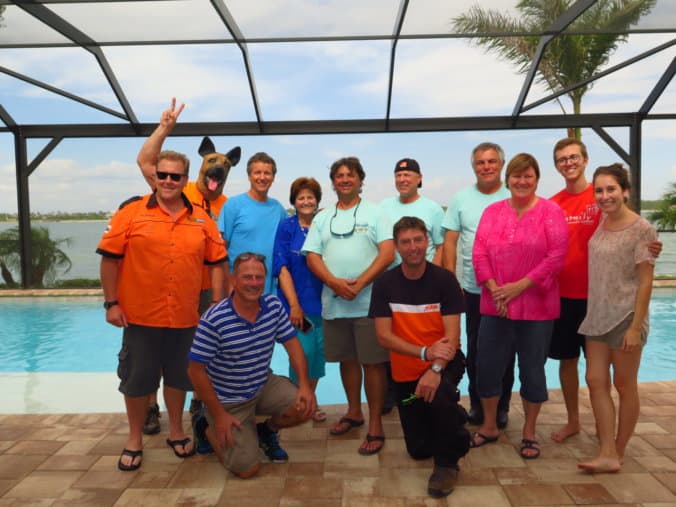 After lunch we rode to the coast, a place called Naples, this is where the most expensive coastal houses in the USA are found. And photos can describe what we saw, I took three photos to try and capture just one house, and this was one of the smaller one’s, the bigger houses are only visible from the beach and from the street one can only see their back-entrances. As one enter the suburb the streets are lined with rows of cars, on the one side there were three Bentley’s and I also saw two Porches and two Maserati’s. Their beautiful drivers were sitting having an early dinner with crisp starched linen serviettes folded over lean and toned stomachs with glittering diamonds hanging between silicon chests while trying to smile through Botoxed lips, sipping Champagne.  (Well actually the last sentence is not based on me witnessing it first-hand as there were no place to park, (the valet parking was also not interested in parking bikes,) but I dont think I am very far off with my analysis. 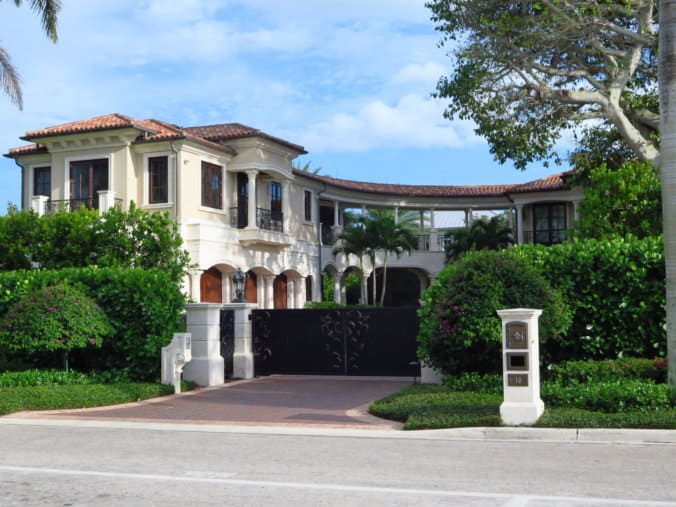 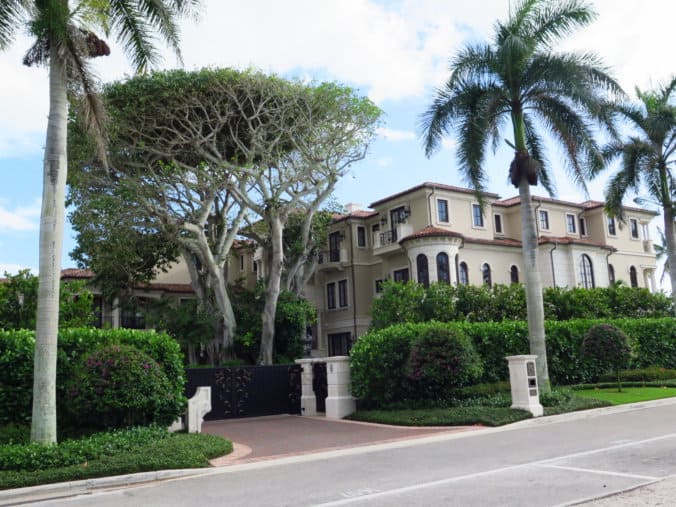 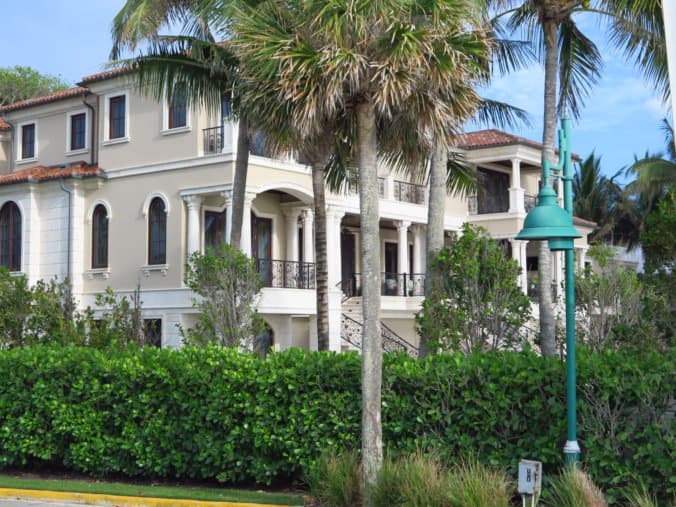 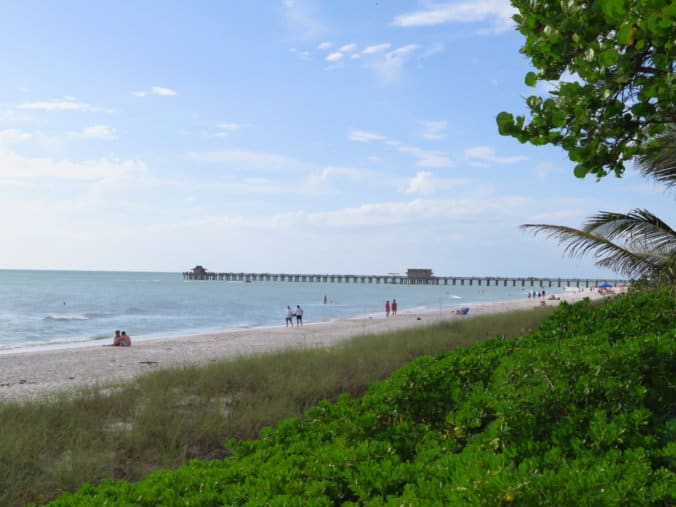 And lets be honest, this is what an entrance should look like !! 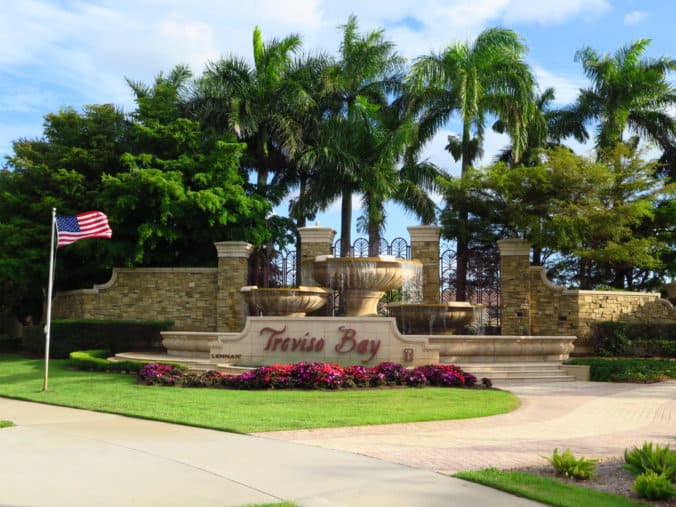 I have been saying in this Blog that we will be taking a ferry to Cuba, this I discovered today was incorrect. There are no commercial ferries running yet to Cuba. So Tex has managed to get a Fishing Trawler who we hope to meet in Key West tomorrow at 15h00 and then with great difficulty we hope to be able to load 7 bikes into what I hope is not a Rust-bucket, and then the plan is to sail 16 hours to Cuba ad arrive there on Tuesday Morning, (yes my dear mother, your Prayers will be welcome at this stage.)

I hear there is hardly any wi-fi in Cuba yet, so maybe I will be able to send out a posting tomorrow afternoon before we sail from a pub or restaurant, but after that there might not be any postings for a few days until I manage to get some wi-fi. Tomorrow we hope to do some Gravel Road for the 1st time on this trip and we have our sights set on Alligator Alley. But more of that in the next posting.

Here is a photo I did not post yet of us at the coffee stop yesterday (where all the jet-skis were.) 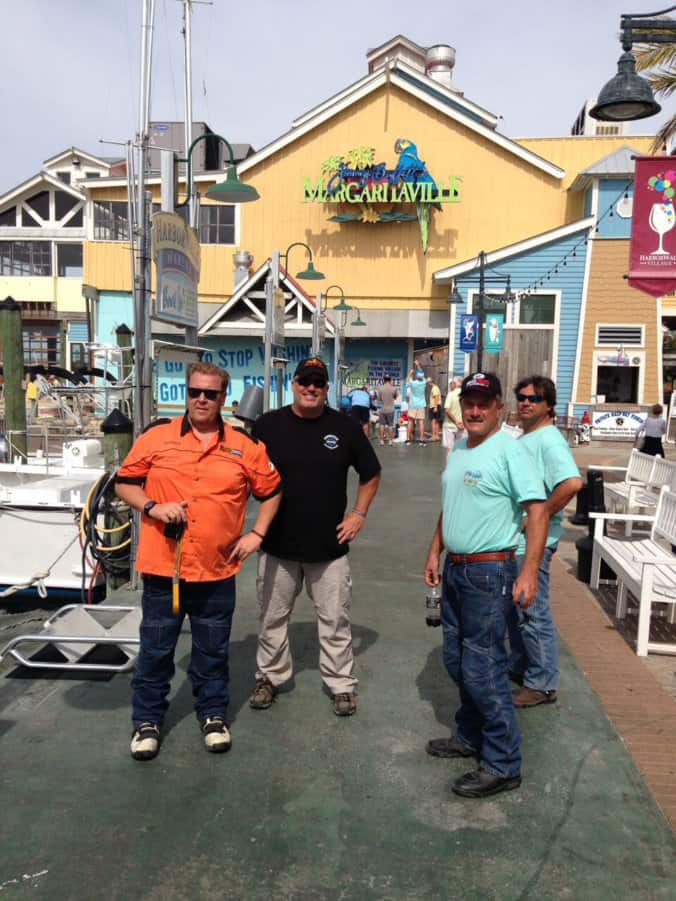 Tonight the guys went for a sun-set ride and managed to look romantic in the sun-set and then even managed to get some local Swamp-Red-Neck people shout and swear at them. 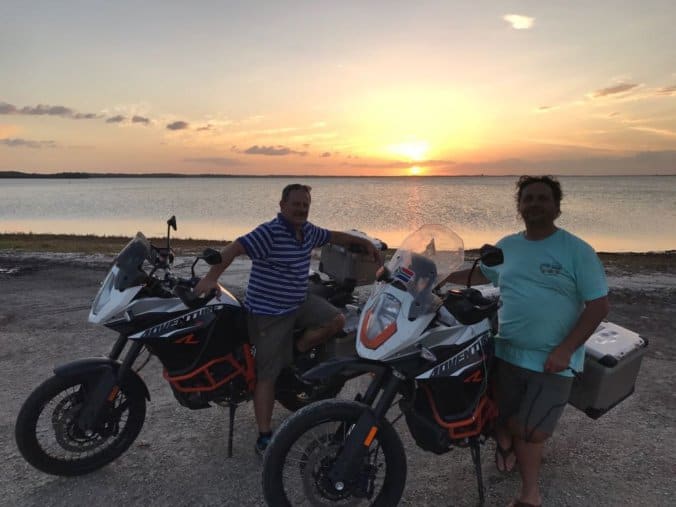