Today was hard, very hard, you had to fight every kilometer to get it behind you, and we were not expecting it after yesterdays easy and trouble free ride in from the North. The day started well with jokes about who should drink from the special corner on our breakfast buffet where all the other juices were displayed, it started with the normal juice on the one side, then there were “slush puppy” juice machine with frozen juices, (as you gathered we spoiled ourselves by booking into a “5 Star Hotel” as they are so cheap this far from anything,) and then the special juices, the first had a Cobra at the bottom of the jar, the next one of those flying squirrels, the other was full of lizards and last full of baby sea-horses and an Eal. Regardless to say, the new-one on this trip, Gregg, was told to prove he was a man and he had to have a shot of the Snake-Juice, which did not have any effect oh him apart from sending his whole body into the shakes, but I think that was from the stress and not the “juice.” 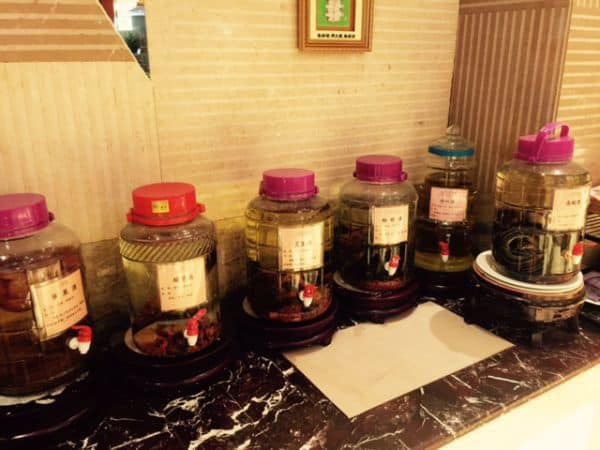 Then we were off, but it took us an hour and a half to travel 60km, and then we were still in rush-hour traffic, still in the city, fighting for what was ours, we thought. The only way I can explain the chaos on the road and in the traffic is by relating it to the traffic in India,(where there are no lanes and a dual carriageway becomes 4 lanes, but how many going in each direction is decided on by the size of the vehicle, it changes from 3 lanes going in one way and only one the other way, but it takes only two trucks to change that and then every smaller vehicle has to squeeze into one lane to make space for them, but in India it is bicycles and Tuk-tuks fighting for space, here it is trucks and buses,)  and I know I wrote yesterday how impressed I was with all the towns and cities with regards to the planning of the roads and traffic management, I said that before I ended-up on Route 208. Yesterday was another route from a very remote area, today a different kettle of fish.

Eventually we were out of the city and the road became a single lane in each direction going through endless villages, and then we had to learn about all the Kamikaze Drivers who simply push into the smallest gap, and they know yuo have to brake to avoid them, but that is the driving style, you “hoot and hit the gap” and some people are not so good at judging the gap, one I was behind Pie and a Taxi came from a side road and just crossed in front of him, we all saw him coming but no one though he had any intention of trying to cross, as a result I saw a KTM dive into its suspension and both wheels ABS Braking working at its hardest. Later in the day a witch on her broom (well actually it was an old woman on a scooter with a broom sticking out from the back and a spade sticking out from the front,) tried to end Rocky’s trip but he swerved to miss her and she then focused all her attention on me and tried to get me down, but by grace I can write to tell the story.

Then we got to one of the most Northern parts of the Great Wall Of China, I dont want to bore you with all the facts, but this part of the wall is 300km from Beijing where I saw the that part of the wall in around 2005, so it is a long wall, over 5000km in total, built over 1000 years ago in sections at at time to provide protection from enemy that were threatening that area at that time. This part of the wall was for protection against the Mongolians. The wall has not been well preserved and in most places the outer skin of bricks were stolen in later years by people wanting to build homes (they used to build two brich walls and filled the cavity inbetween with sand which they compacted, so in many places it looks like mud walls that remained. 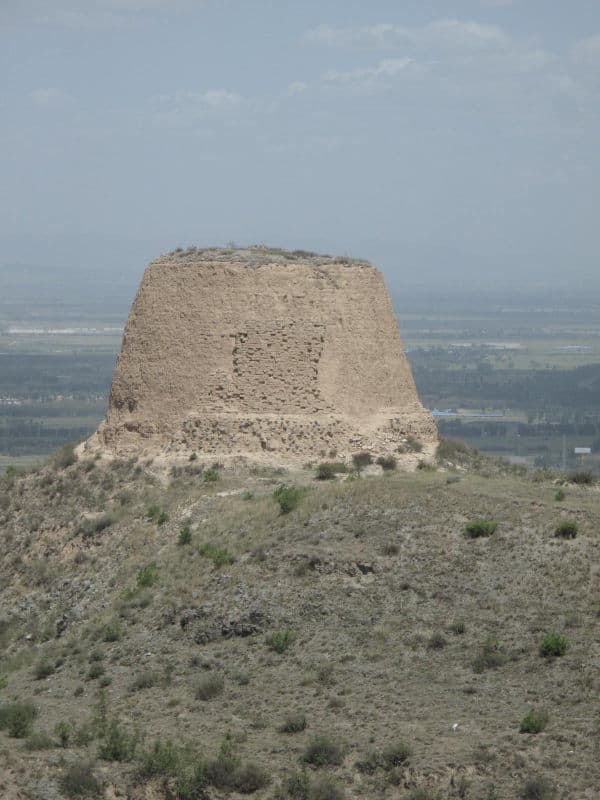 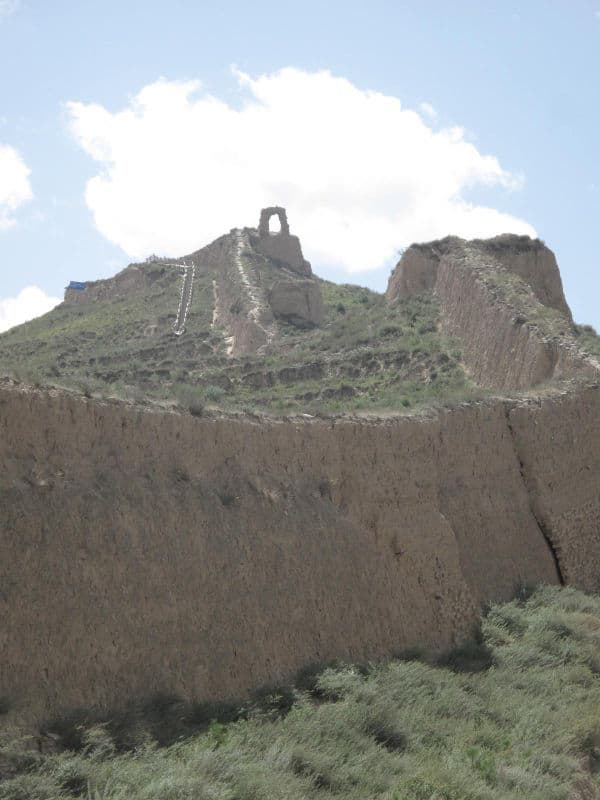 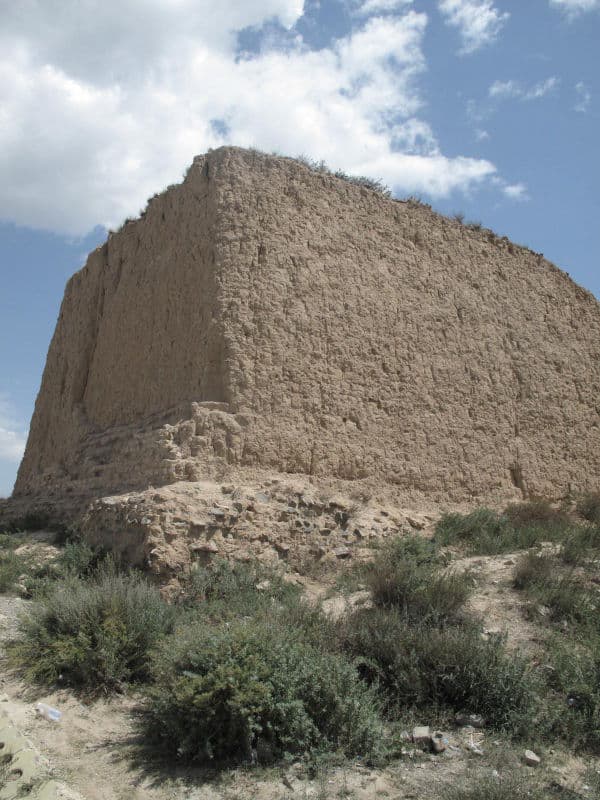 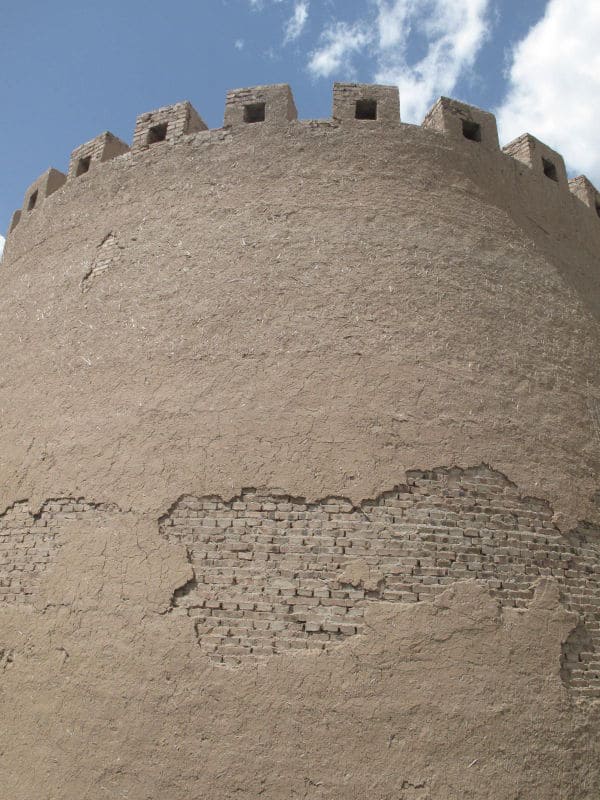 As you can see, no tourist, near Beijing there are hundreds of buses per day and thousands of tourists climbing on the wall every day. 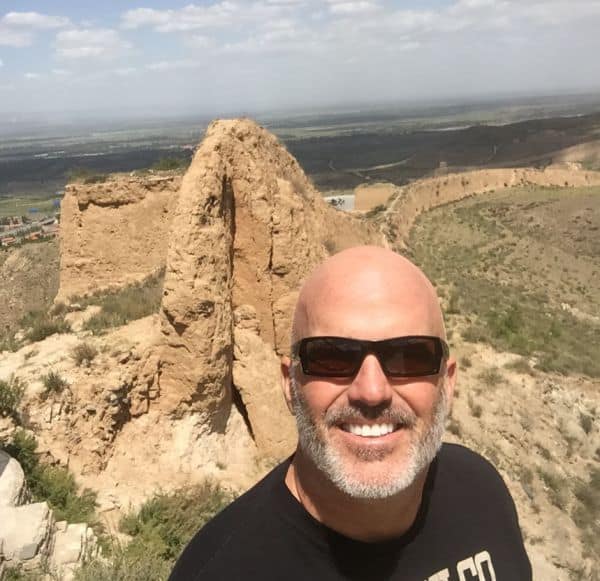 We are still filling the bikes (see below) from the tank of petrol we have in the Land Cruiser (we use this tank as a way to use-up any currency from the country before  we leave and then only leave about 50 litres in that tank for any emergency to keep the weight of the Toyota down.) Note that Tony was given a shirt & cap and now he really feels part of the team. 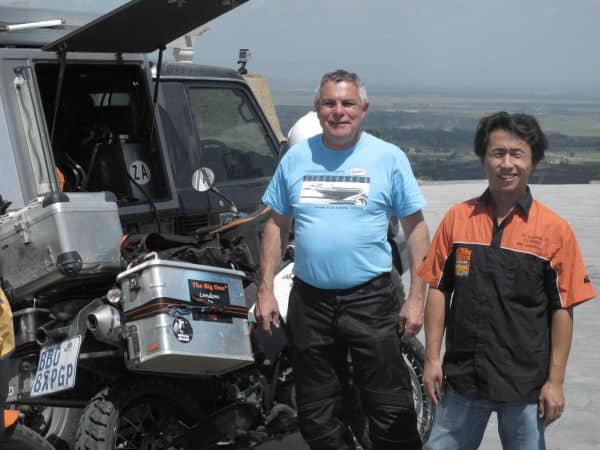 Note we are still towing Tex’s bike, we were supposed to collect him on the way at the airport but Murphy’s Law kicked in again and ,after he flew in from Erenhot and his brother from Texas, they arrived at their meeting in Shanghai only to be told the meeting has been moved to Friday, so we will be collecting him on Saturday. 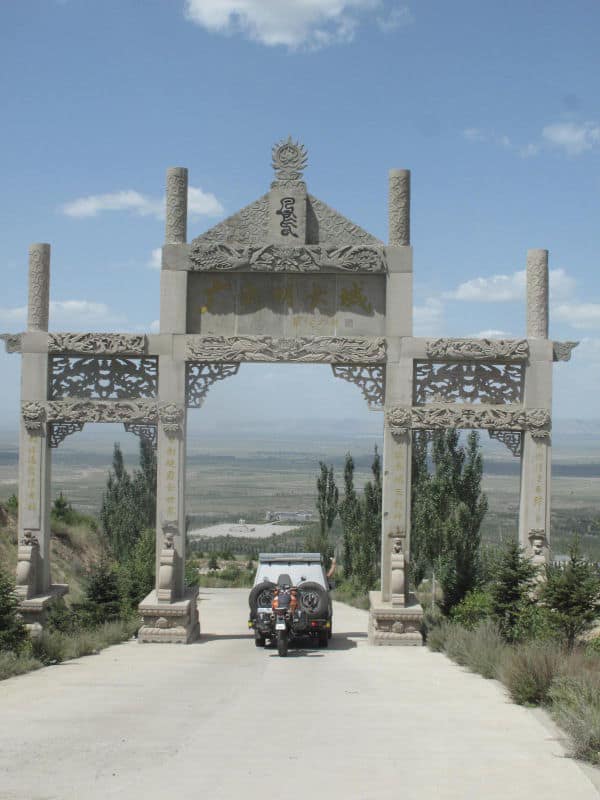 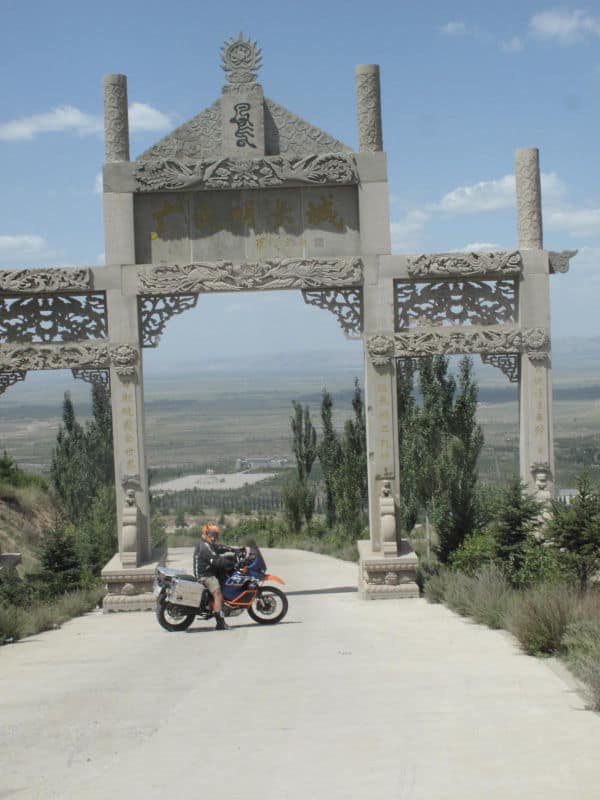 Along the way way were were next to the wall with many statues to be visited. 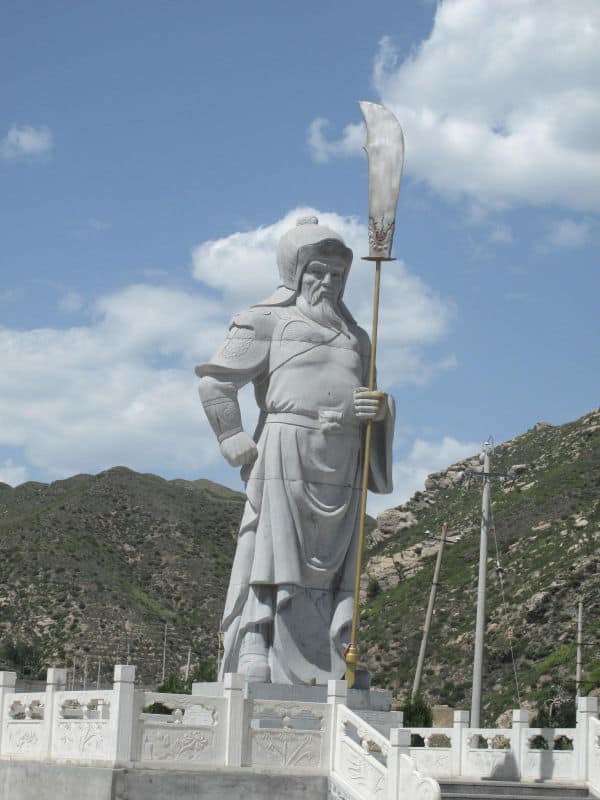 But dont be fooled, these mountain passes are no jokes, sort of like the Swartberg Pass but only this Pass was tarred with plenty of trucks. A the bottom of the pass there were special “drive through s” for the trucks where they would pull into a area to the road where once they have stopped, there is a hosepipe at each of the trucks 24 wheels and they would fill up the reservoir on each wheel’s brake that is used for the brakes cooling.

I have never in my life wished that I was able to travel on a highway, but today I did, today was tough and if jumping on the highway was an option I would have done so, just due to the safety factor and the time factor. Today we traveled more than 9 hours just to cover 422km in distance, no lunch stop included. The Navigation is also a major problem as the new Chinese maps in each GPS does not line-up with your actual position, it is off by approximately 300m when traveling  North South and another 300m when going East West, so the poor GPS is having a worst day than me as it is constantly trying to figure out where on the map you are, and just as it thinks you are at one point (which you are not at) it tries to direct you to another place as you did not follow its instructions, Chaos !!! hope it gets more accurate the more South we go, but we have adapted by Zooming out and just working on which direction the destination is, but in cities you need to follow the route markers and learn to ignore the GPS, oh yes, I forgot to mention that the towns names are in Chinese, and the characters at first look the same but then you start noticing small difference and before you know it you have taken the turn to the sewerage dump (a dump) and not the town you are looking for.

Have a look at this foto, who does this? 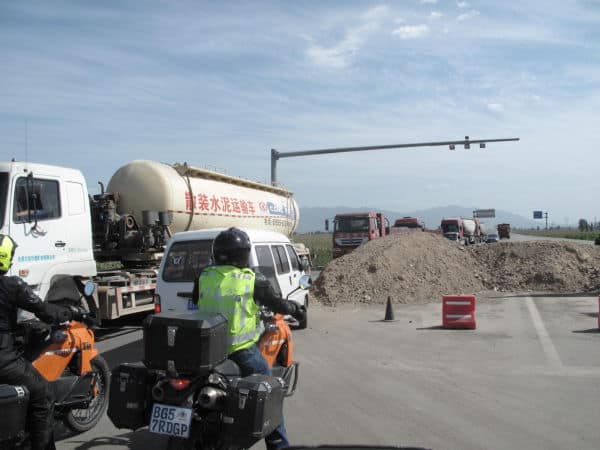 Yes, you guessed it, we have to go through that gap after the white kombi has gone through, and before we got there the truck you can see on the right arrived on the other side of the sand and tried to squeeze in before the truck already in line to pass through the small gap.

But as bad as the day was, that good the evening became as we walked into the ancient city, sort of like Dubrovnik but here they are still fixing it for when the tourist discover it. The people still stay in the city and we went there for dinner a and walked through the streets looking at how hard they all work, just trying to make a living. 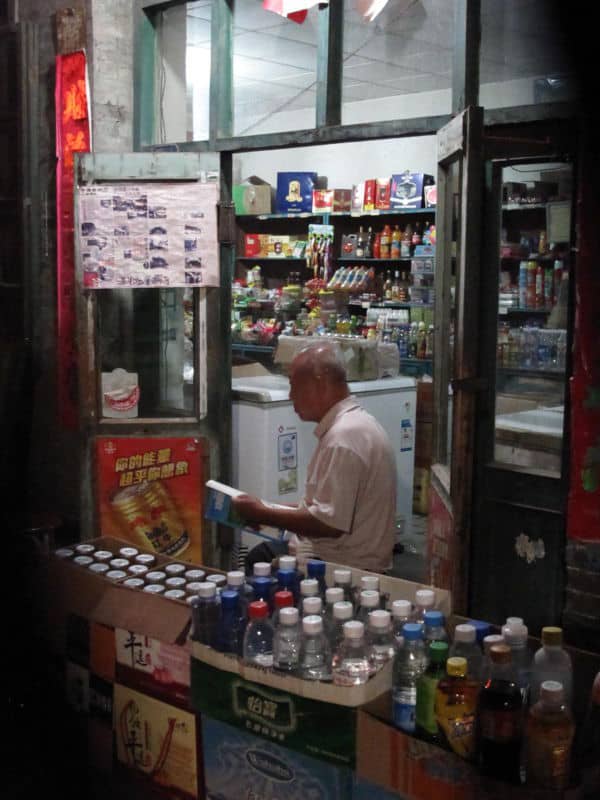 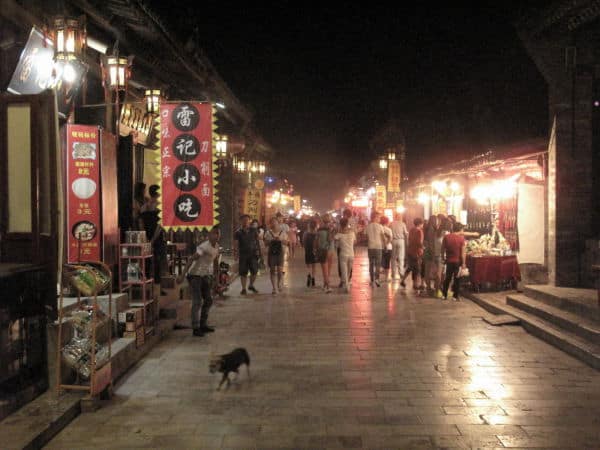 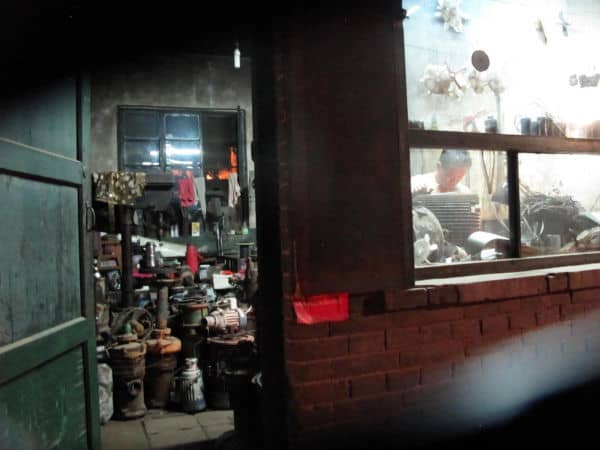 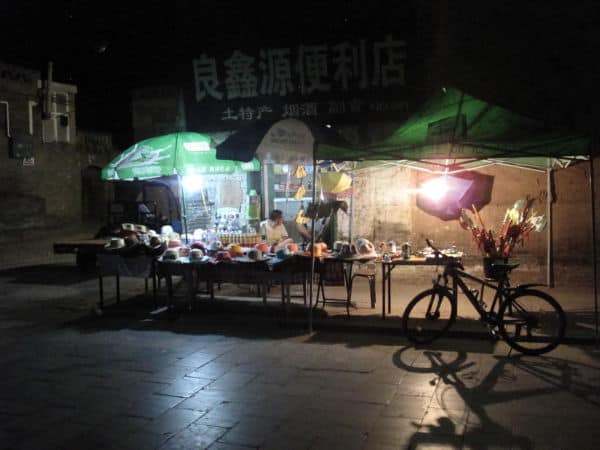 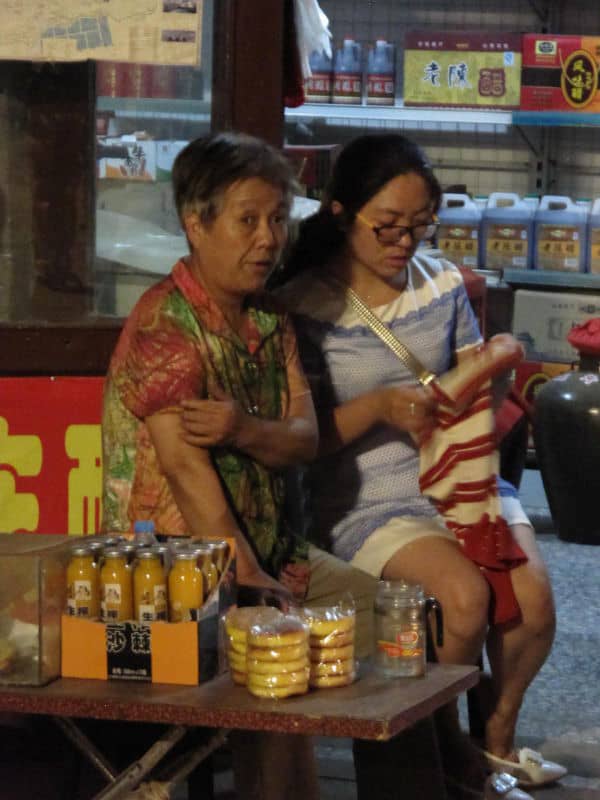 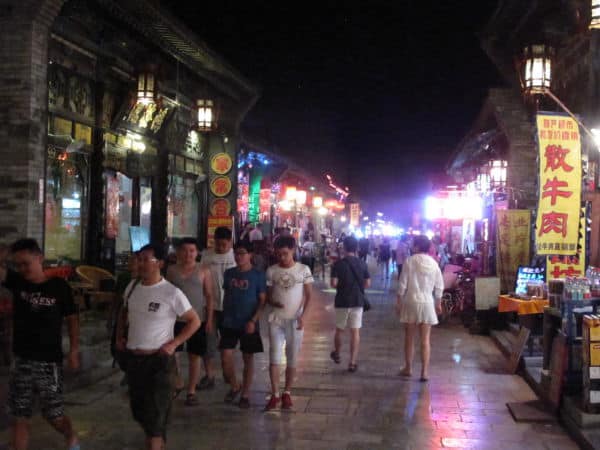 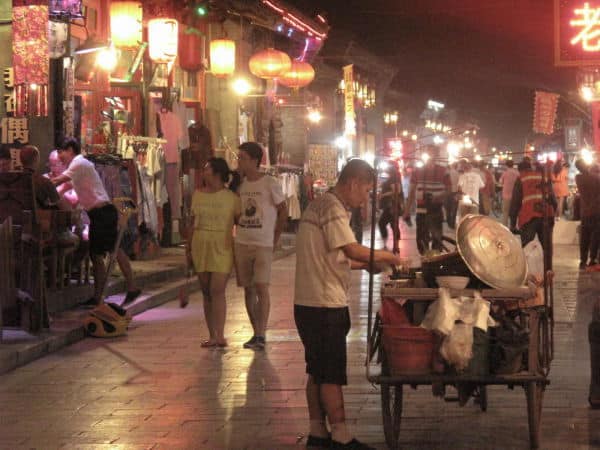 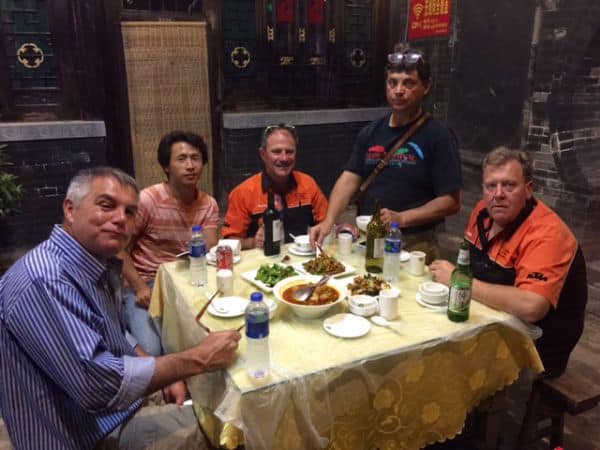 After dinner Greg’s Dog mask made an appearance (it also made it to the top of the wall) and we were all very embarrassed when Pie and Greg decided to feed the fish at a foot-fish-spa, (the fish that were in Pies bath were very happy with their meal, nothing like feet that had been stewing in an old “frot” pair of riding boots for 34000km (remember he brought new ones but they were stolen, so now we all have to suffer with the old boots being put back in operation.)

Then we got a tuck-tuk to drive us through the ancient city of Pingyao. 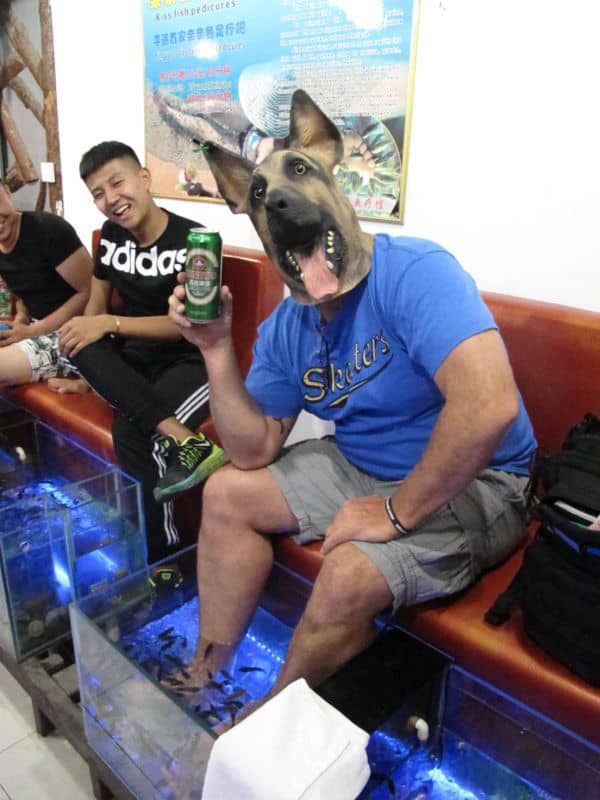 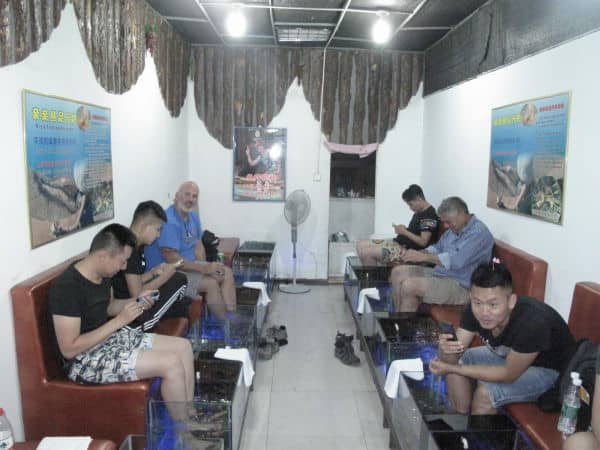 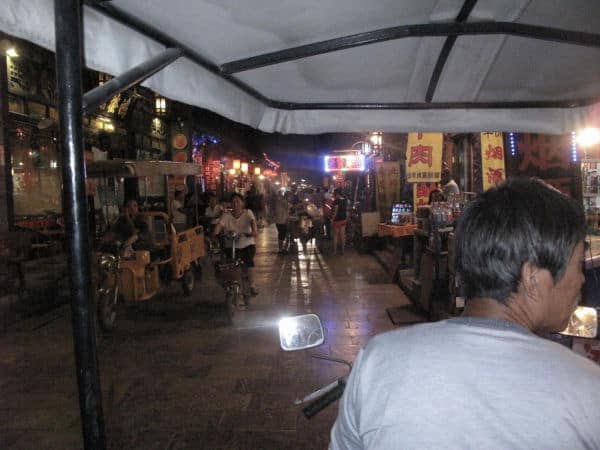 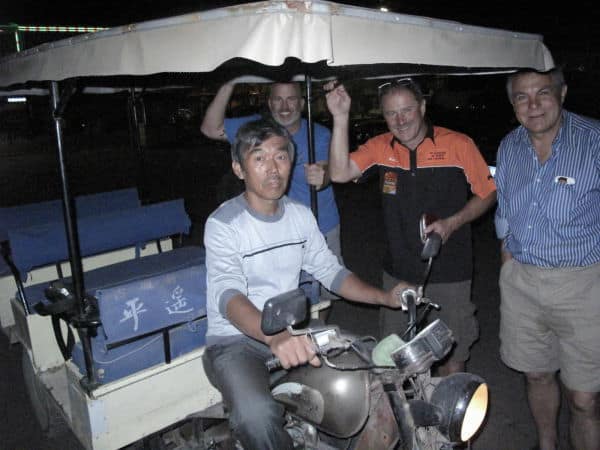 We drove through the city gate to an entire street filled with Karaoke Bars, all of them had spectacular and interesting entrances to draw-you-in, but inside each of them there was someone busy killing a song, and even thou they were singing in Chinese and I did not know the song, it was clear, none of them could hold a note to save their lives. 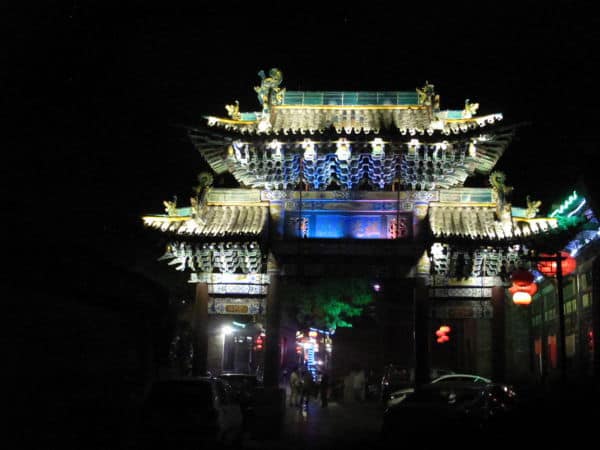 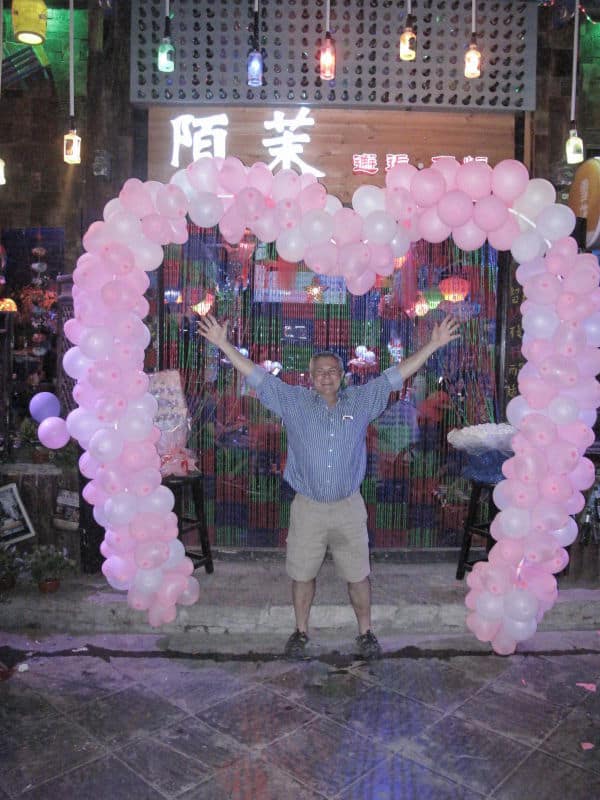 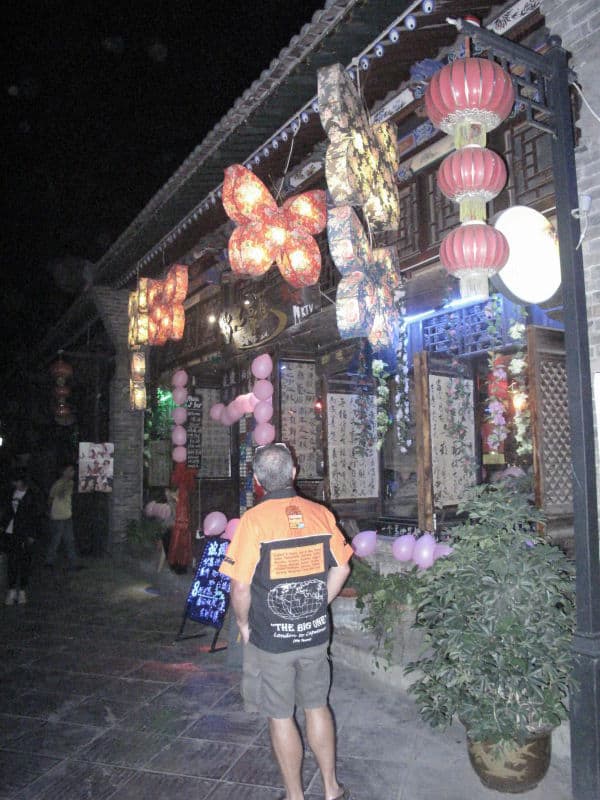 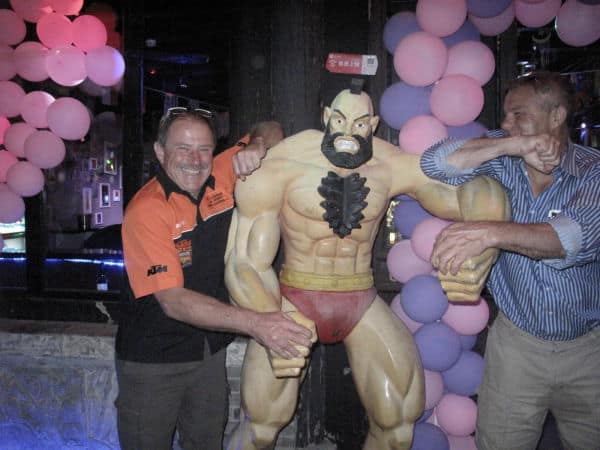 It might look like we just had some fun tonight as way to relieve some stress built up today after one of my most difficult riding days of over 200 000km on an Adventure bike, but we did make some new rules and planned on how we can do things better and differently to avoid days like today, so in future we will be leaving earlier to avoid the peak hour traffic, we will in future  no longer leave the route planning just for Tony to do but will get involved and as we cant travel on Highways and therefore the Ring-Roads are not allowed, we will in future first re-group outside big cities and travel through them as a pack, today was like traveling on Mainreef Road in Johannesburg and having to travel through the city center all the way from Soweto to Germiston without using any highways, and this is better when done together. At least I think that we have no moved pass the roads were coal is transported as the coal dust on our faces tells a story of its own.