Peens left Key West this morning at 2h00 and rode to Miami where he said it took 2 minutes for a Cuban visa (Tourist Ticket as they call it here) to be issued (that is about how long it took them to take the $100-00 Visa  Fee) and he then flew to Cuba where he will meet-up with Estie, (I hope she is not expecting him to cycle around the island with her.

The rest of us had breakfast and then each went into a different direction. Pie was on the phone to some Studebaker Collectors in Florida, (he is buying parts for some of his cars he has back in RSA and he needs to first pay them here, (by posting them a cheque, no one wants to do it by EFT payments???) and then somehow the parts and motors gets shipped to South Africa, he has a few guys that he wants to go and see over the next few days on the way North.

Rocky was our laundry-man and spent the morning washing and drying cloths. Some guys went to do some Shopping and others went to see the Harley Davidson Shop. I thought I would spend half an hour to get my slow-puncture on my back-wheel fixed, well, not so easy as I thought. I eventually  found the Industrial Area on the island and when the 3rd Tire Fitment\ Repair Shop told me he cant plug a hole on a bike tire I asked him why not, then I heard the sad story about how a tire shop who works on car tires don’t have insurance to cover him should he fix a bike tire and gets sued should something go wrong??

Then I found a Yamaha dealer with a workshop, the mechanic was clearly visible in the workshop, wiping his hands and staring at a scooter (Tex tells me that they are Unionized and are told how long they should take on which jobs, so in order not to finish the job before the allocated time is up, they look and wipe hands and think a lot about jobs, Tex tells me that this is so in many industries, so my perception that one can simply tell an employee to not return the next day is not true, they also have to be dismissed properly just like we do back home.)

After waiting for the only person manning the front of the shop for 15 minutes while he talked on the phone to someone about an outstanding debt of $36-00 he eventually asked what I needed, I told him that I need a leak plugged on my back wheel. He then told me he is fully booked for two weeks in advance, but if I come back in the afternoon he will see if he can make a plan. So I made my own plan, I drove to the Auto Spares Shop and bought my own Tire Repair Kit and went to a Gas Station to plug the leak myself.

But even this turned out to be tricky as one first need to get coins (you have to pay $1-50 for 5 minutes worth of air, in RSA air is free at Gas Stations.) So once I plugged the leak I wanted to inflate the tire, (dont we spell it “Tyre” in RSA instead of Tire?) But then I had to figure out how it works, and you first need to set the pressure you want to inflate the tyre to, and here I made another mistake as I was working on Bar Pressure and the pump was working on  Pounds per Square Inch I think, as I got this wrong as well and under inflated it, and by the time I had this figured out my $1-50 had expired. But wait, there is more, for a few Dollars I bought a Allen-Key Set at the Auto Spares only to discover later that it did not work as it was an Imperial Size and not a Metric size. But wait, there is even more, this whole calculation problem followed me onto my Scuba Dive as the Dive Master asked me how many weights I wanted, I said 6, which he gave me, in Pounds, not Kilograms, and after that little mistake was discovered I also found out that the Pressure of the Dive Cylinder was not in Bar,  but at least I knew I could dive until my pressure went into the Red Section on the gauge. We had a 45 minute boat ride to the reef around this Light Buoy, see the colour of the water!!! Amazing 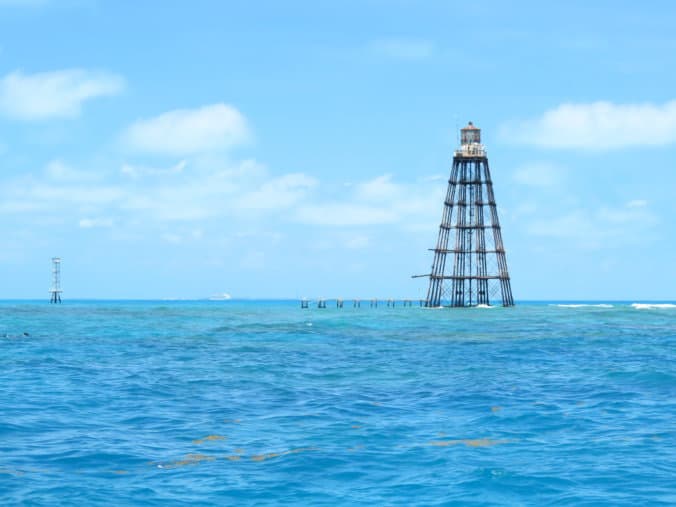 The dives were very disappointing and I guess that I have just been spoiled with diving at the places we dive in the Indian Ocean, (see my dive photos of Zanzibar I posted at the beginning of this Leg 12 of our bike trip.) But CJ (Dive Master) tells me there was a storm a week ago which changed the visibility from 100 Feet (30 Meters) to less than 30 Feet, (10 Meters.)

But it is always nice to blow bubbles and stare at fish. On both dives today we had several Barracudas swimming with us which was very special as I have not had that for a few years, and instead of “hard corral reefs” we only had the soft coral and plenty (hundreds) of purple fan corrals. I suspect the hard coral that lay  damaged and snapped-off at the bottom of the ocean must have been damaged by previous storms and hurricanes that came through here.  Dog was my dive buddy and the rest of the KTM Tour of the World Team went along to Snorkel. 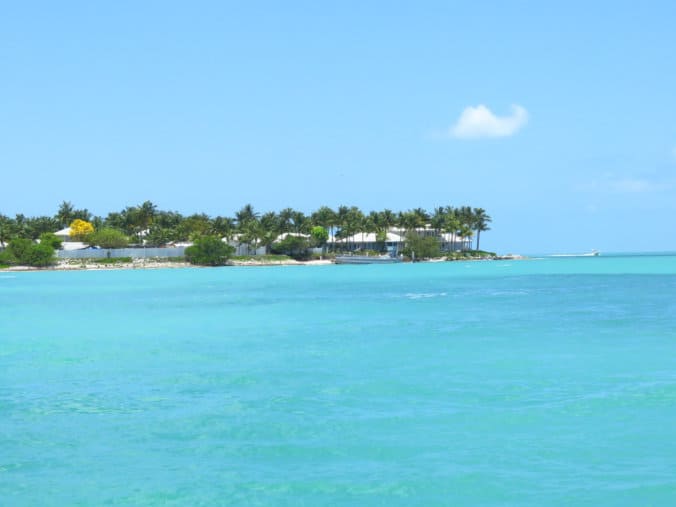 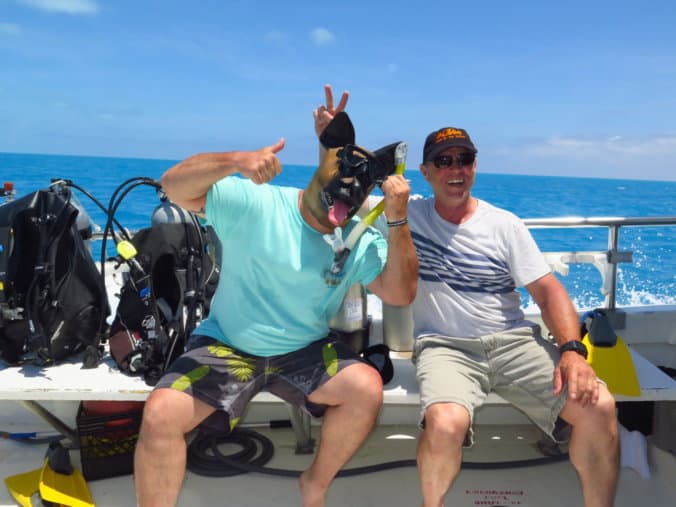 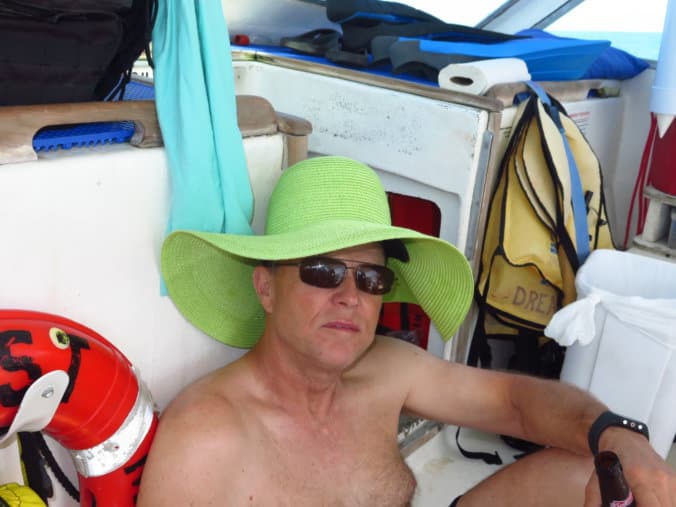 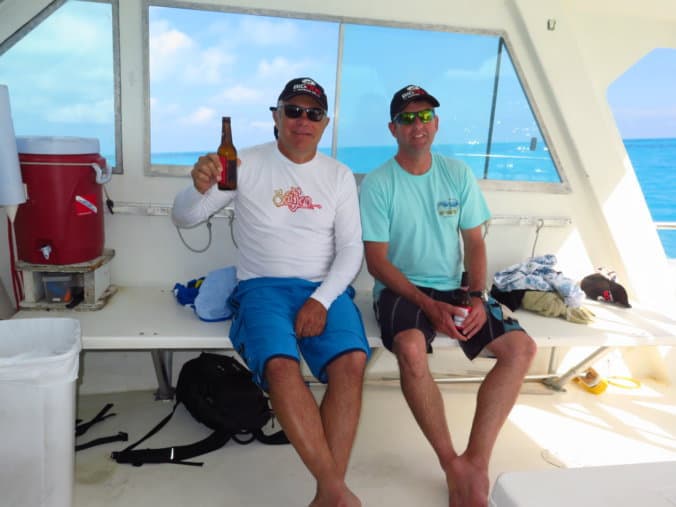 This morning Dog rode back to the dock where the boat we were going to go on to Cuba yesterday was moored, he found 6 different state agencies (Homeland Security, Police, Customs, Immigration, Coast Guard etc.) busy searching the boat, opening all the hatches, looking in every corner and in every possible hiding space. So our “Almost to Cuba Boat” was under siege. We don’t know what the real story is, the Owner of the boat told us that they had caught him taking ice through to Cuba before and they found some old coins on-board, which they confiscated, but after weeks had to return to him and no charges were laid, so the officer from Inland Security was angry with him and was trying to get him in trouble, (I did see an old Harley Davidslon bike motor and a new fridge that was, or was not, going to go to Cuba with us yesterday, but who knows. Dog went back to double check what the story was as he, as a policeman, wanted to know what “the real deal was.” But when he found the guy from Inland Security (the one who wanted to draw his fire-arm on Dog yesterday,) he told the guy that he was a disgrace to the badge he was wearing.

This is the photo dog took, and I dont know how, but he managed to block-out the faces and other details of the people that was doing the raid. 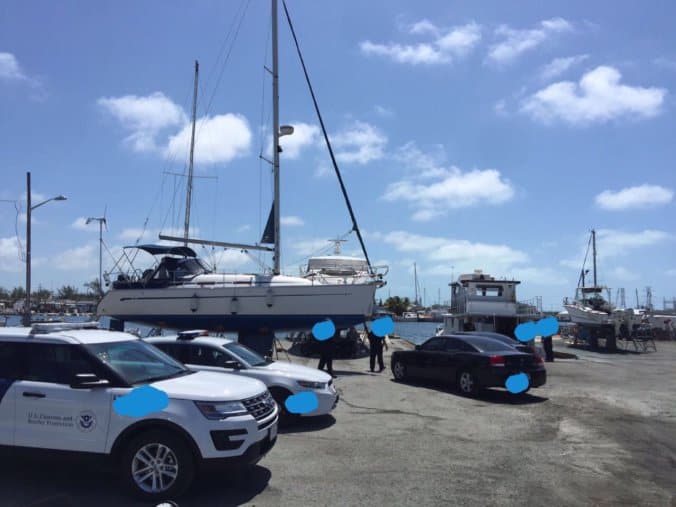 Let me just say, we are devastated that we are not riding our bikes in Cuba as planned, but after seeing the Dive Master performing  according to Law today on the Dive Boat, (he was like an air-hostess, pointing out safety stuff, doing Roll-call after each dive to ensure all 10 of us was back on the boat etc. etc,) I am relieved that we did not go on that boat to Cuba as I was not ready to swim to shore again (have had to do it twice before in Mozambique) and this boat was more like The Black Pearl from Pirates of the Caribbean than a safe certified, legally operated charter boat, but hey, we were trying our luck and pushing the envelope to get to Cuba and the owner of this boat was pushing his luck and his envelope, and it just bombed with our bikes on board, SH1T happens.

Tomorrow we start riding North again (thankfully, maybe the next hotels will be like all the others we have stayed at for almost 200 nights across 28 Countries that could provide us with easy to access, proper working Wi-Fi.) I really would like to “Name & Shame” this Hotel Group, but this Blog is not for complaining, and today I came faced to face with the realities of the USA, and the problem lies with me, I had honestly thought that after the harshness of Russia and Mongolia,(  not too even mention China,) that traveling through the USA would be a breeze, a walk in the park, they are the “perfect people” the perfect country, I was going to ride through the American Dream, as portrayed by Hollywood, but it was a perception I had, and it was wrong, it is not without its faults, not without problems, it is run and inhabited by humans, its not immune to failure and not immune to disappointments. And that is what traveling is all about, and the only fool in all of this was me, thinking the USA would be so much different from the other 28 countries we have been through was naive, each country has its things that lifts it up, and America has so much of this, but each country also has its problems and as long as I can remember this lesson for the rest of the this Leg and the following Legs in the USA everything will be all-right. Better I focus on the positives and ignore the negatives.