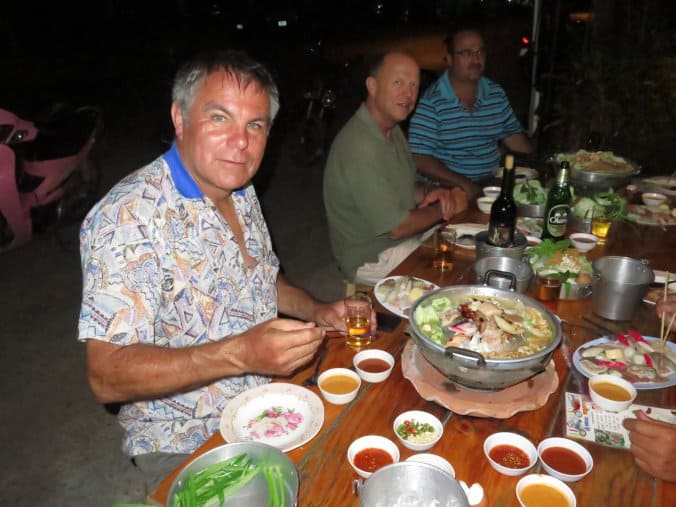 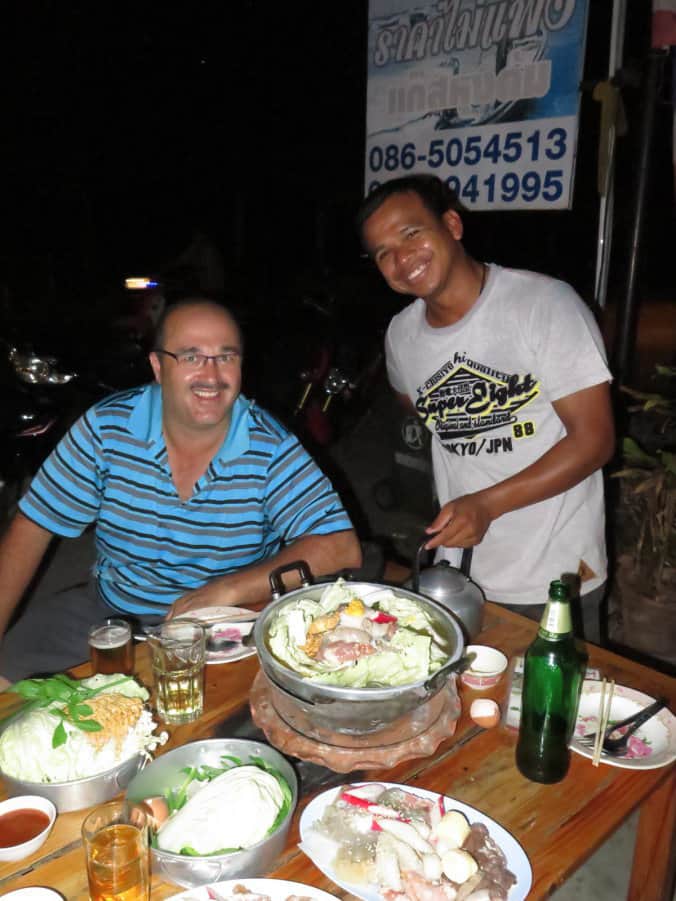 Those of you that has been following this blog through China might remember that I said we will never eat a “Hot-Pot” again, but I obviously lied, sorry. Although, it is a Hot-Pot with a difference, it also has a “grill” at the top, but the bottom is still the same, )in the boiling soup you boil your vegetables and noodles and the rest you grill over the vents at the top. We walked to this little road-side restaurant and caused a problem when we presented two bottles of wine we needed opened as they (nor any of their neighbors) owned a cork-screw and the son was sent away on the scooter, one bottle at a time to somewhere up the road to have the wine opened. But we befriended the local families and Peens handed out some little African gift (beaded animal key-chain) to a little girl who was having her birthday.

See if you can identify some of the food we had to grill. 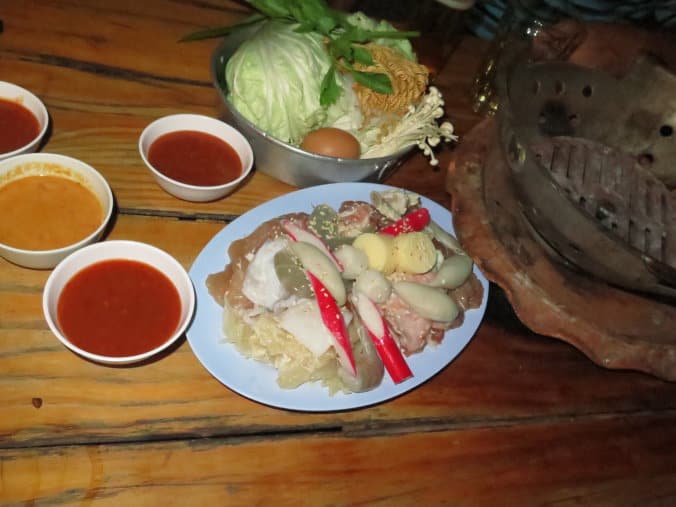 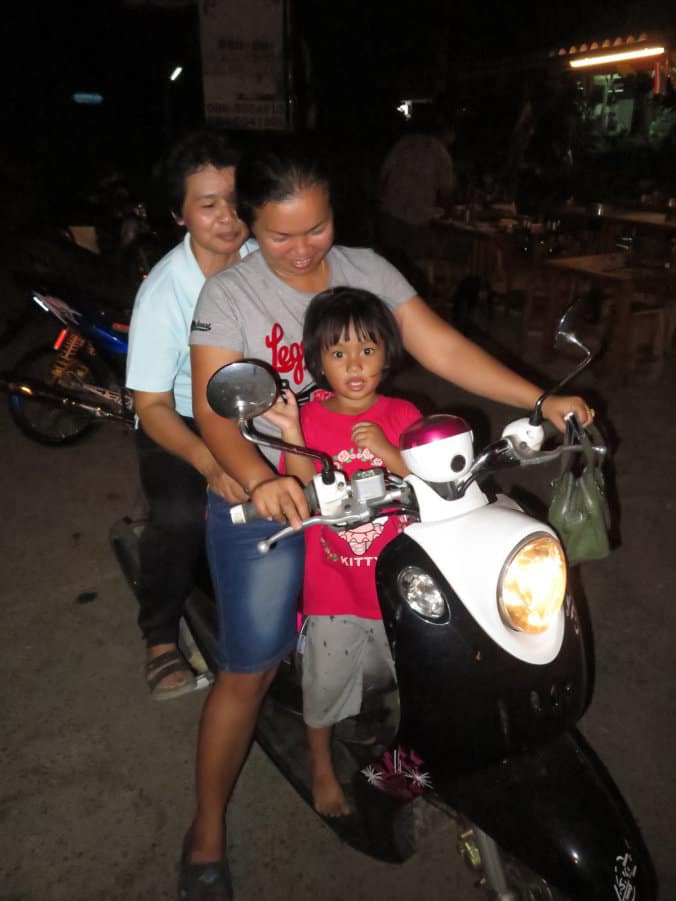 Tonight before dinner we went for a ride looking for a local place we could eat and found another fishing village, but for the small fishing boats, note these boats are called “long-tail” boats as a motor is connected via a long shaft to a spinning-prop at the back and steered by moving the motor, (in some places very large V-8 motors are fitted for maximum speed when used as Water Taxis on canals around Bangkok.) 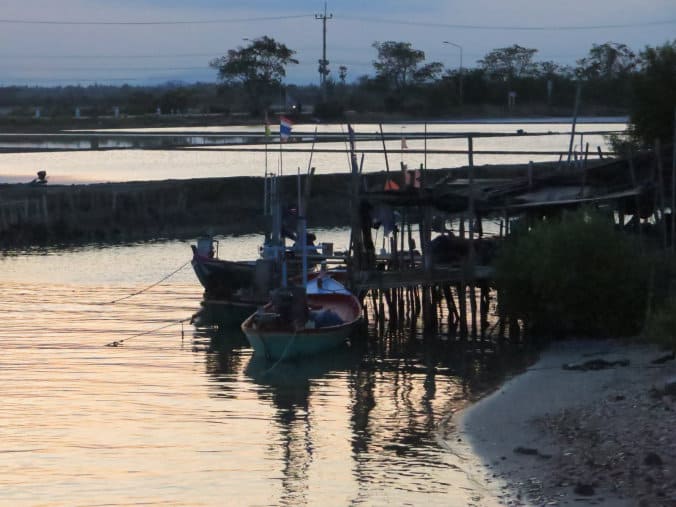 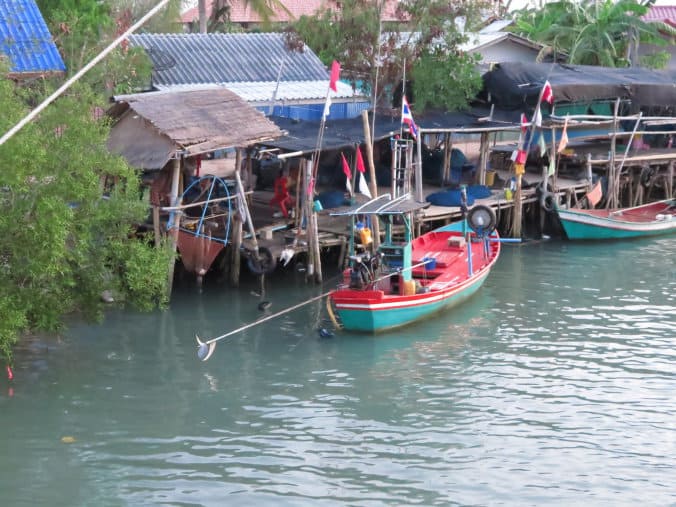 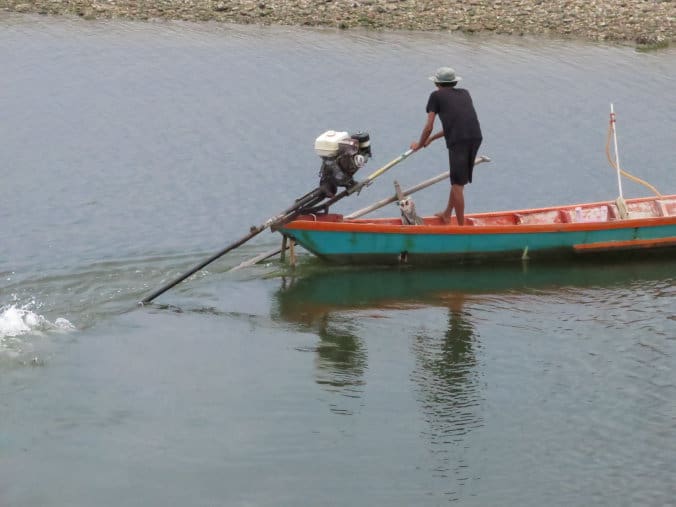 My “friends” say I did not embarrass myself enough in yesterday’s blog, (and now all of a sudden there are other camera’s) luckily they kept their cell-phones in theri pockets until after they had dragged me out of the pond and got my bike back onto the stand, but here is Hennie pointing out where I laid (so I dont get confused and think I landed on the side) and then Pie snapped this photo after the nappy fell form my face.) 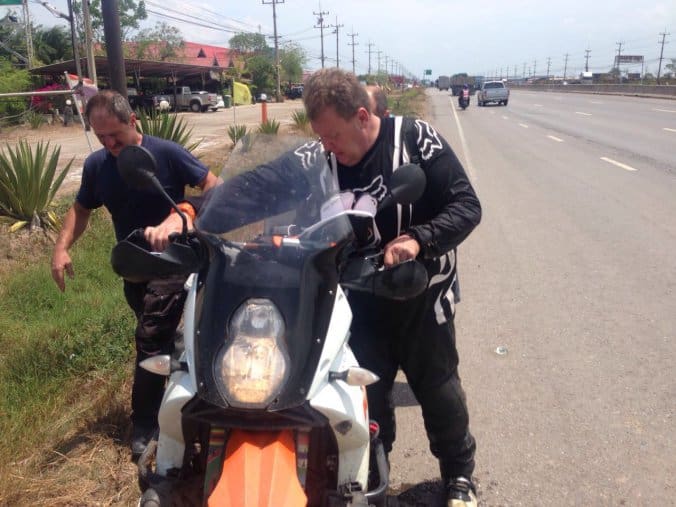 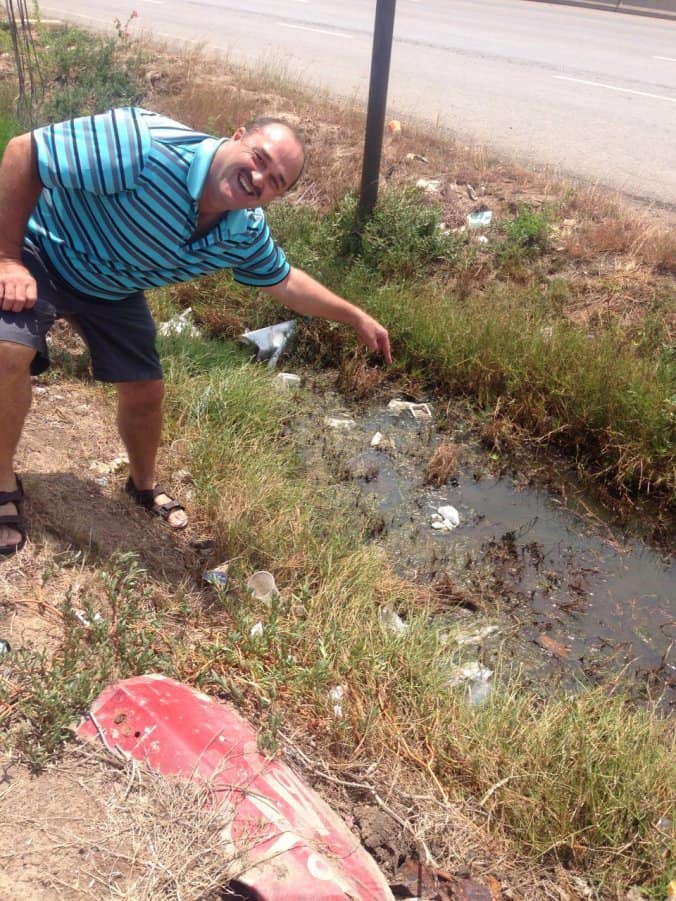 To the family and friends who has been e-mailing me health tip, thanks, but I am OK and yes, I did disinfect (I jumped into the swimmingpool, boots and all spoiling Hennie’s fun.) (Our place did have a nice pool last night.) 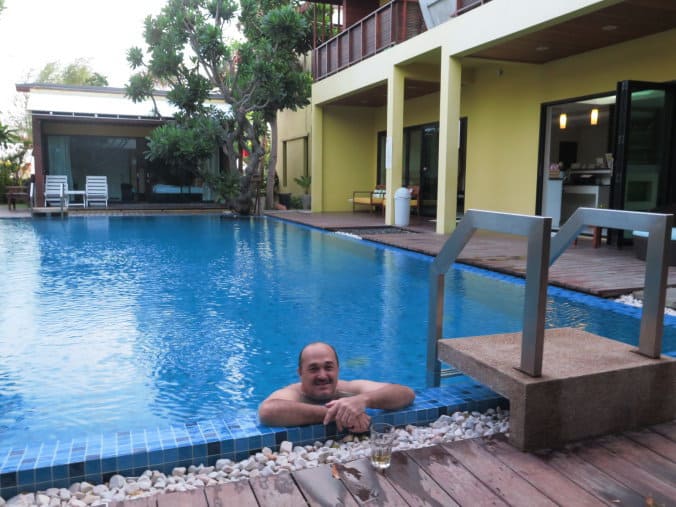 Today we continued down the East Coast of Thailand staying on the beach road as close to the sea as we could get, I was a little disappointed as this “scenic” route is nothing like the road along the Med in Turkey, or Chapmanspeak drive in Capetown, the reason is because the road is only 10meters above the sea and there are always trees or little bushes or coconut trees between the road and the sea, but at least one often found the little Calamari Fishing Villages next to the road, (note the lights, these swing out to the side of the boat and then they fish with a Hand-line for the Calamari. 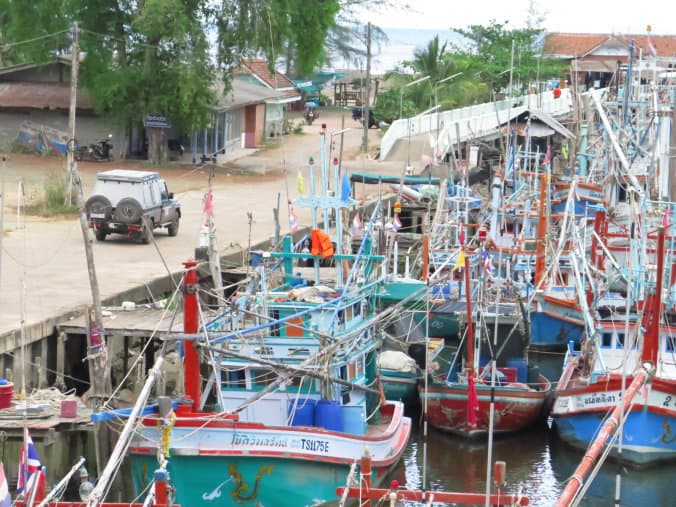 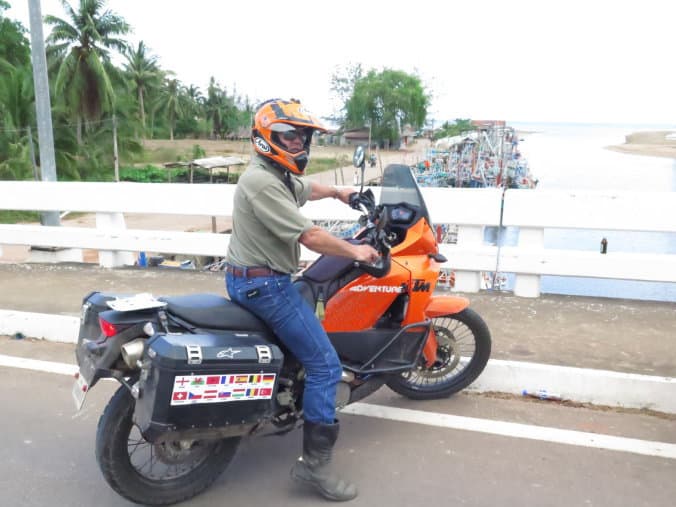 We stopped for a cold beer when we had 40km left for the day next to one of these villages, note the islands of Ko Somui and Ko Tao out in the background, (I have fond memories of these two islands as these were the 1st places my wife and I went to when we Back-packed this area in 1996. 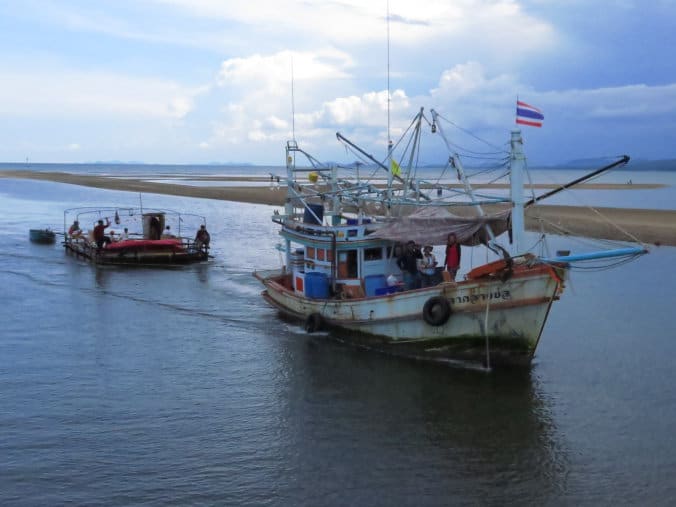 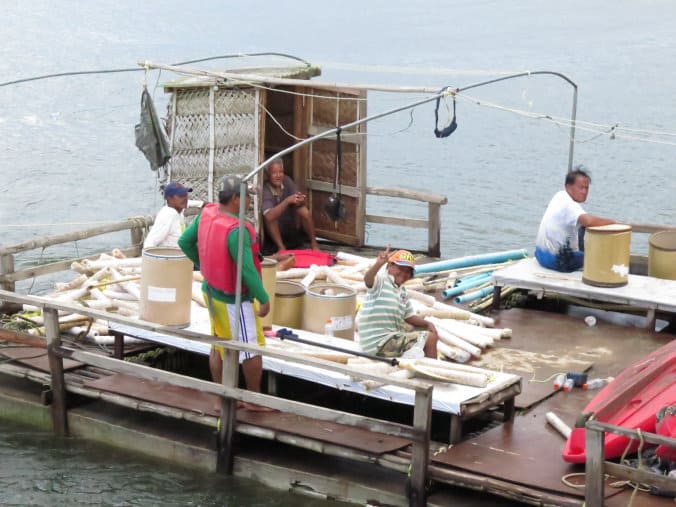 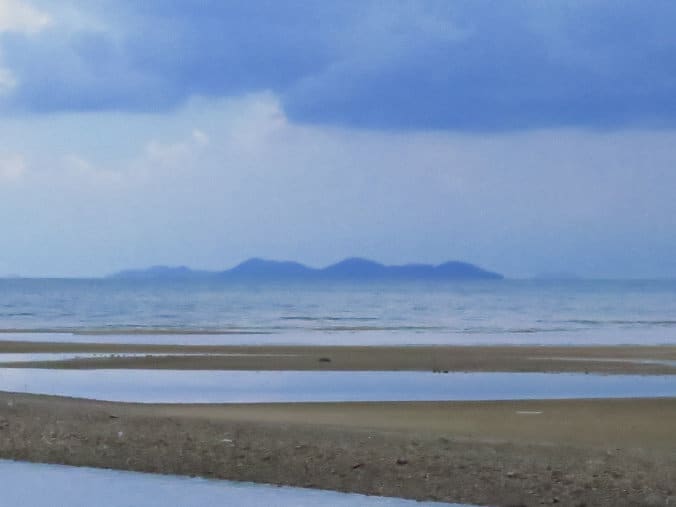 Note the rolls of fishing line on this barge, it looks like drain-pipe with line on.

We are staying in a small little resort and I think we are the only people as they said we could park in the reception. The beach is beautiful. There must be people staying somewhere close as I tried to book a dive in the morning but the boat is already full with 10 divers and they could not accommodate Peens and I. 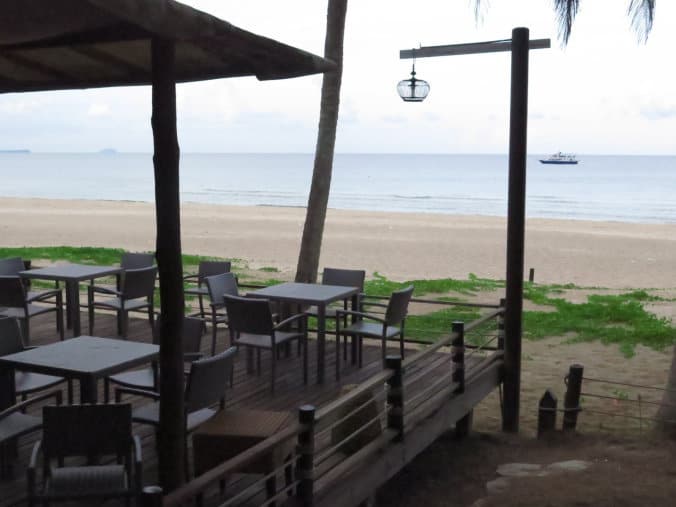 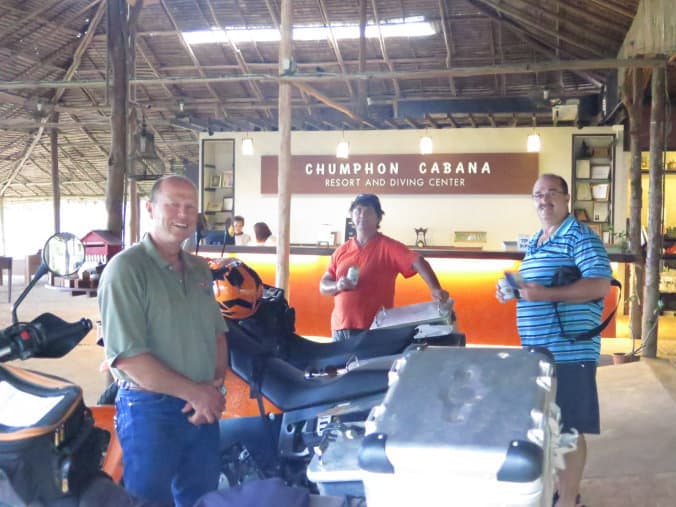 We have received bad news from the shipping agents who informed us that if we do not have Carnetes De Passages, (like a passport for cars and bikes,) when entering Singapore, we will have to pay a refundable Import Duty of 200% of the value of everything we are bringing into the country. We did have Carnets de Passages when we started the trip in 2012 but they have now expired and we did not re-instate the guarantees, so we either have to provide Bank guarantees to the value of R2 000 000-00 upon entering and then once the vehicles has left Singapore and we can prove that we did not sell them in Singapore we would get the money back. So Tex has been mailing left, rights and center every-time we stopped and got onto some Wi-Fi, but at the moment it looks like we will have to change our plans and ship from K.L. in Malaysia (Kuala-Lumpure) but the negotiations is continuing on all fronts.

Tomorrow we switch over to the West Coast of Thailand and will be staying in Phuket for two nights so that we can do some washing, go and do a double-tanker scuba dive and just relax before starting the final stretch of this continent.