Yesterday we entered the State of Maine and today we continued through it, but the clouds were low and we could not see too far from the road, but the entire day was spent riding on a winding road through forests and over rivers and next to lakes. The leaves have just started changing color and I hope that this remaining week of our trip will be  just long enough for the other leaves to change so that I will at least be able to take one photo next week of en entire forest with autumn leaves.

I sneaked a peek into Pie’s Pannier and saw why he was tying a bag onto his back-seat, his panniers were starting to fill-up with Studebaker spare parts he bought after it was manufactured here by Gary, the couple we had dinner with 2 days ago which I wrote about. I forgot to mention this dinner in my Blog as I feared I would not be able to keep quiet about the story Pie told us during dinner, the story of how he bought the Indi-car-motor in South Africa. This is not a story for a blog, it needs a complete book on its own. I am holding this story back for one day when I have nothing to write about in the blog, maybe another rainy day soon (thanks to Storm Jose) and then I will tell you this fascinating story, but just to wet your appetite, the story includes the famous mining magnate Mr. Oppenheimer, (no he did not bring the Indi-Car to South Africa) it includes an Undertaker in Zimbabwe, a hearse needing a new engine and then there are several twists, but that is for another day. Lets peek into Pies Pannier: 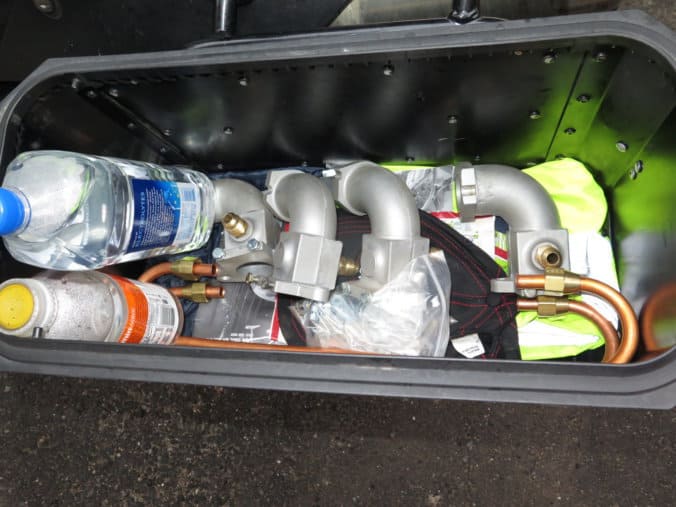 Here are some photos I took along the road in Maine : 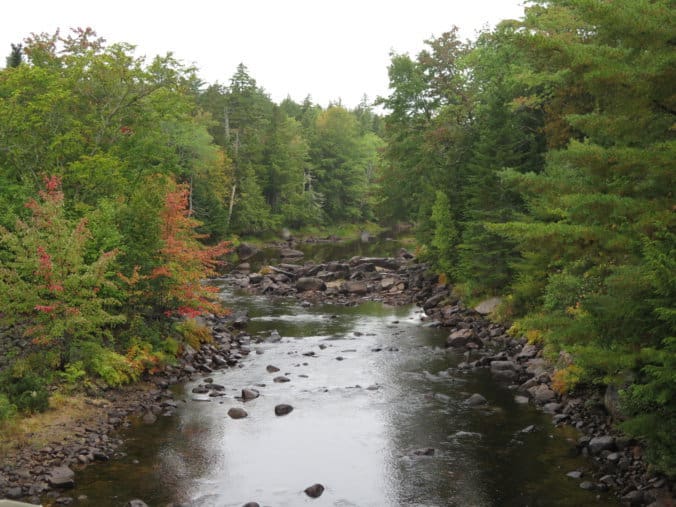 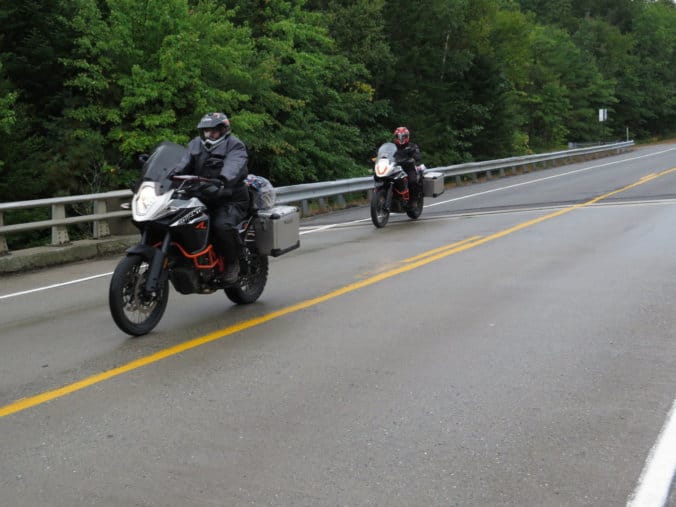 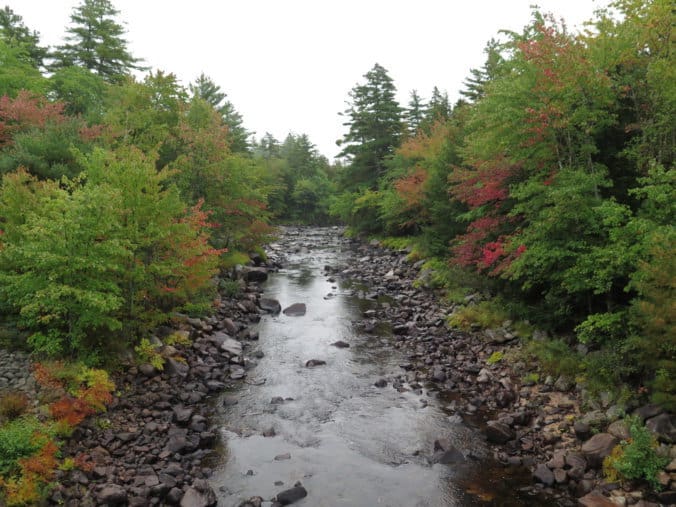 This man found a plan for all the old tractor seats he collected : 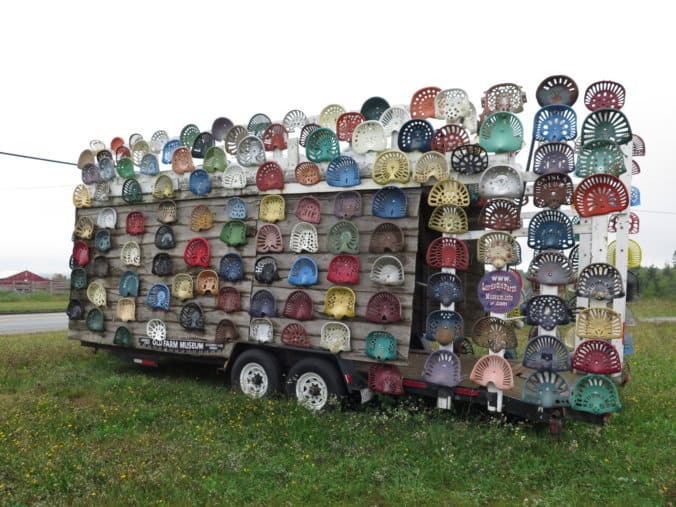 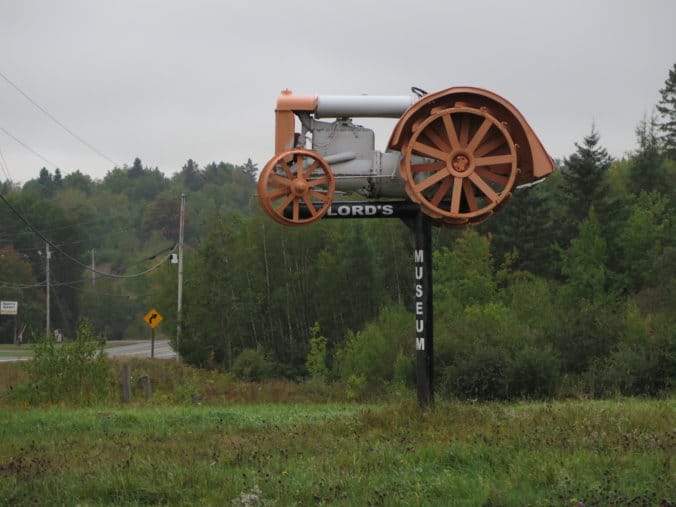 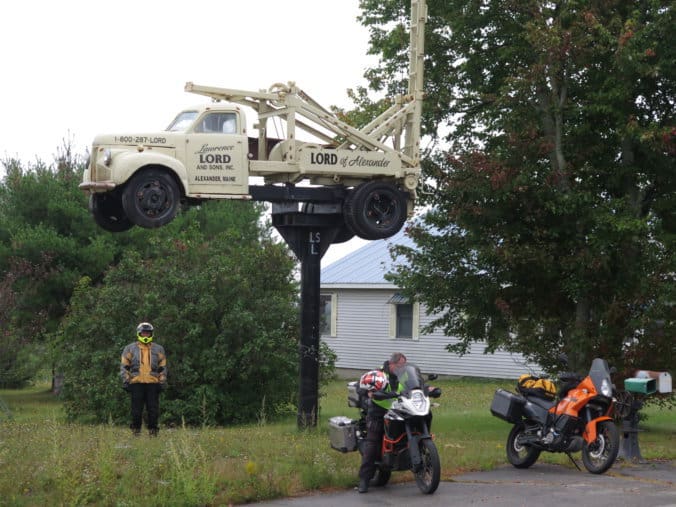 My Pumpkin Photo of the day : (Well actually the 1st is to show how cheap Credit is here in the USA, you can stay in a small house and still afford and expensive motorcar or bike and boat as you can lend money at 4,5% interest, in South Africa it is three times that rate, if you have a good credit record. 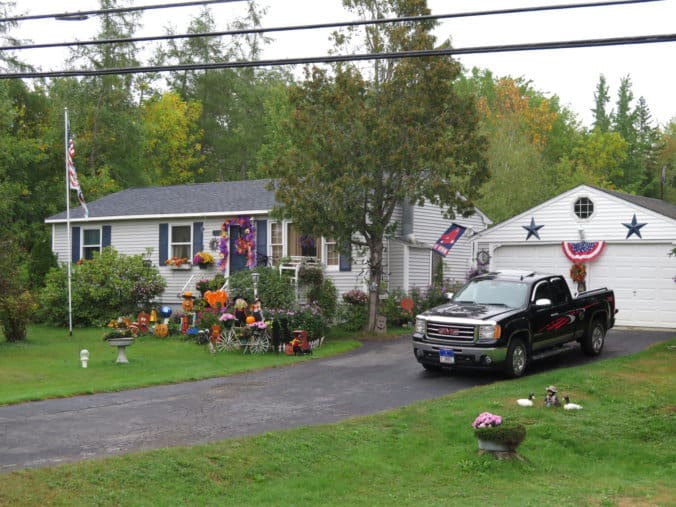 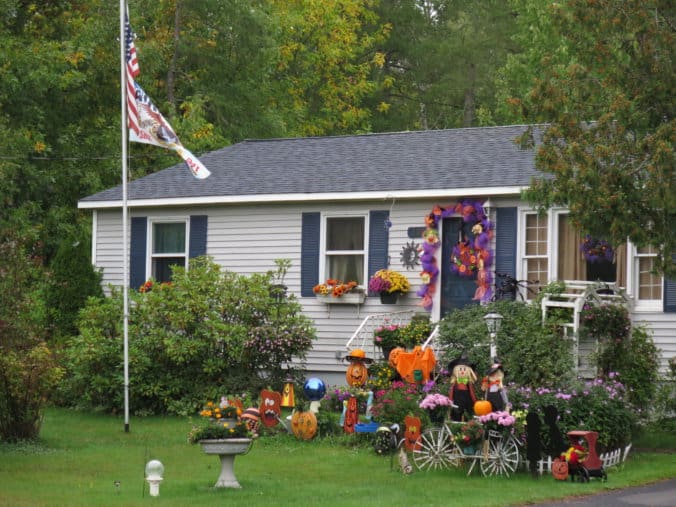 It is very fashionable to Pimp-Your-Box, and note the red flag is down, so no mail in this box. 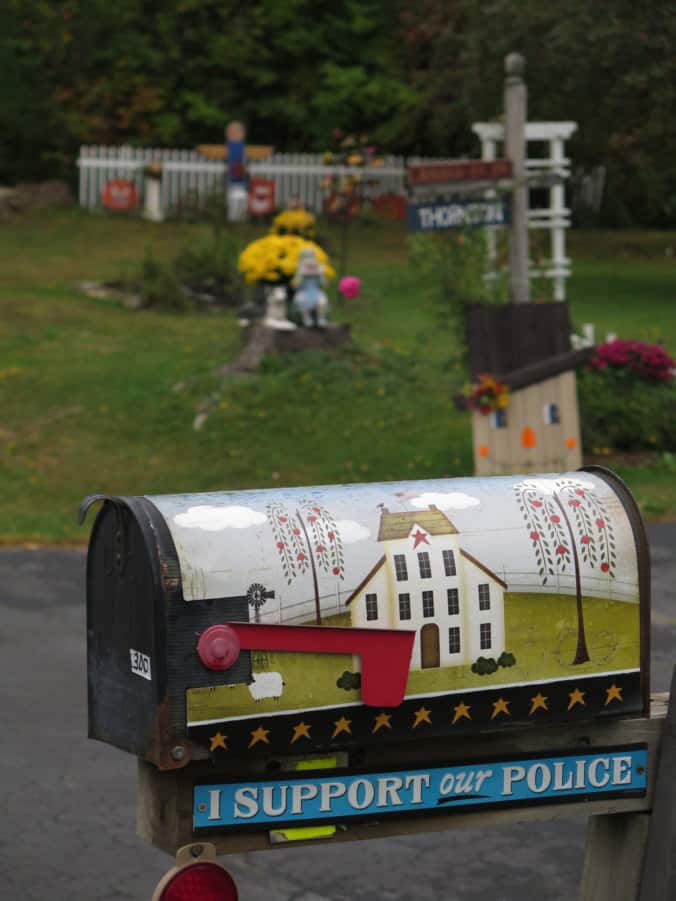 The rivers are so clean there are water-lilies growing on the sides of the river. 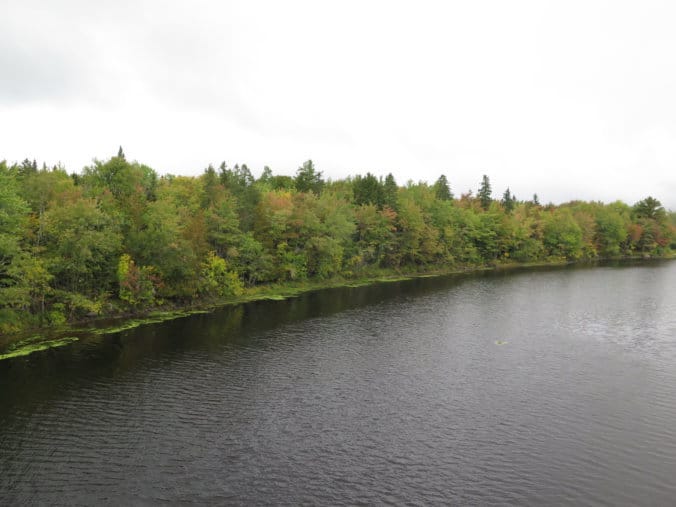 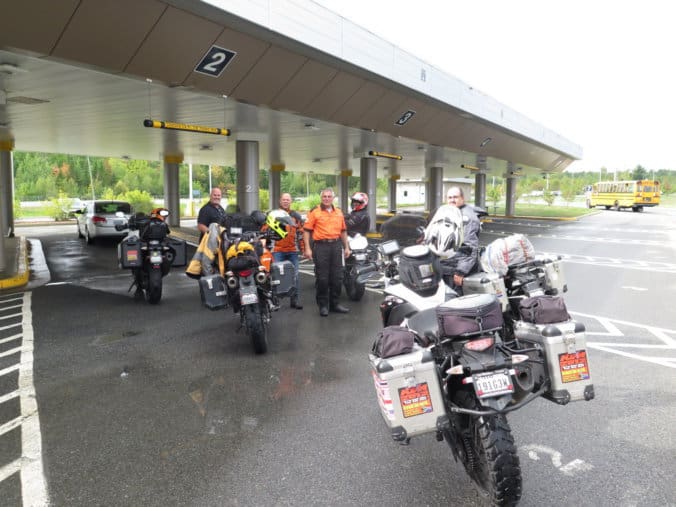 In Canada they use the Metric System and it was nice to see a sign showing the next town in Kilometers and not Miles. As I was riding along the road tot he ferry terminal Tex raced up to me and beckoned me to pull-over, Dog had a big puncture and I was the only one with the Puncture repair kit and the Foam-aerosol so I handed it to Tex who raced back to Dog as we had a ferry to catch. I informed the other guys and we waited, and waited, then they started loading the ferry and when the loading parking lot was empty and we were the last vehicles to load, the 4 of us decided to go and tell the guy in charge that we will not load the bikes and will catch the ferry that leaves in the morning. As we walked up to the guy the other 3 bikes came speeding through the gates and we drove into the ferry as they wanted to close the sea-doors. Here Hennie is strapping down Milsy’s bike, (and he did wax the chain this morning as well, looking nicely after it and riding it like it is stolen, as instructed.) 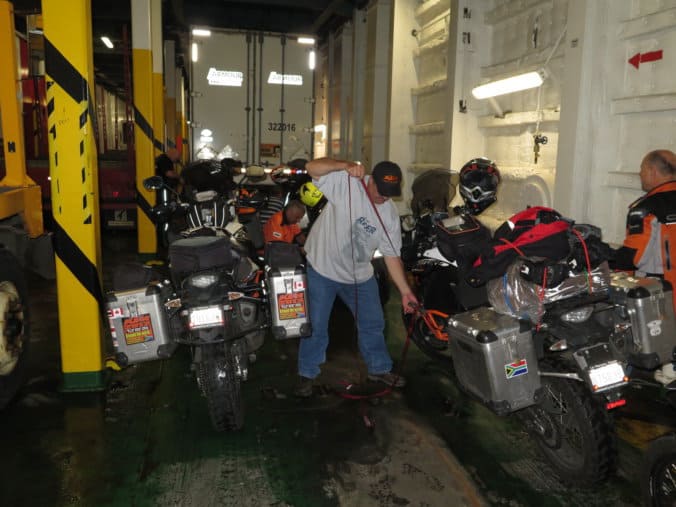 This strapping down of the bikes remind me of the last time we had such a long ferry ride, from Georgia to the Ukraine on the train-ferry, that ride lasted 3 nights, at least this ferry was only a 2,5 hour ferry ride.

Let me just give you some information regarding making the Blog easier for you, if you are reading this blog on a cell-phone you should at least once log onto this Blog’s Home page from a proper computer with a bigger screen than a phone. If you do this you will see that on the right-hand of the blog there is some other selections that are not visible on a cell phone as the screen is too small. You will find two videos to look at and there is also a place to subscribe to the blog, this way you will automatically receive the blog every-time I do a posting, direct into your e-mails In-Box, so consider subscribing, then you don’t have to look every now and then to see if we have started another leg yet but receive it automatically.

Our spirits are high as the riding ahead in what the British called “New Scotland” a Provence of Canada, lets just hope Jose does not turn.