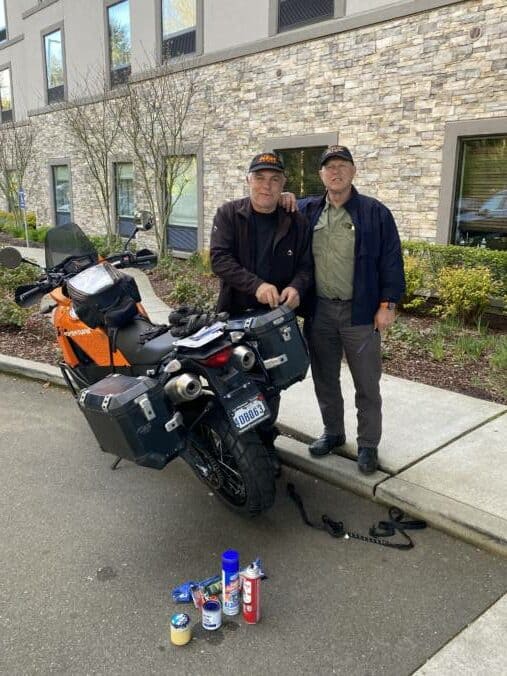 It going to be a looooooooong day, and its still not over. I am sitting at Seattle Airport at Baggage Claim Number 8, I am waiting for Peens’s flight to land, we plan to Uber to Olympia (a suburb of Seattle about 70km from the airport,) together, its 14h30 and I see that there is a 9 hour time difference between here and Jhb. I left my house 4 hours before my flight on Monday evening, then had a 16 hour flight to Atlanta, waited for 3 hours for my connection to Seattle, another 5 hours flight, now I have to wait for Peens for about 2 hours, and then we have a 1 hour Uber ride ahead, so by the time we get to the hotel I would have been traveling for 31 hours.

Luckily some of the guys arrived on Monday evening and spent the whole morning moving our bikes from the KTM Dealer (that collected the bikes from the storage to service the) back too the storage, fitted all our Panniers and Tank Bags and I see from the photo they posted on our Group, they moved all the bikes to the hotel where we are staying tonight. This will save  us a lot of time as there is still a lot of packing and re-arranging and re-packing that must happen before we can ride tomorrow morning, its Stands Up @ 8h00.

I knew we were in for a rough flight last night when the Delta Ground-Staff added a new line to their “did you pack your bags yourself, are you carrying anything for another passenger, are there any explosives in your bag etc. etc.” The new line was “do you agree to wear your mask for the entire flight, even when sleeping and during eating.” Yes, you have to take a bite and put back your mask.  But then during the night a loud cheering woke me, the captain had just announced that The White House has announced that Masks were Optional. So then things just got better.

It feels strange to walk in public and not wear a mask, very few people are now wearing masks here in the airport. May RSA follow soon.

This morning I had a display like I have not seen before, The moon was still shining above the clouds, I saw the Sunrise from above the clouds, with lots of Pink, looked like Candy Floss, it was the 1st time I had seen something like this. I don’t use the word “Awesome” often as I feel that word should be used only when you are left speechless and moved by something, but this morning’s Sun Rise was truly Awesome, may that set the tone for what is still to come on this trip. 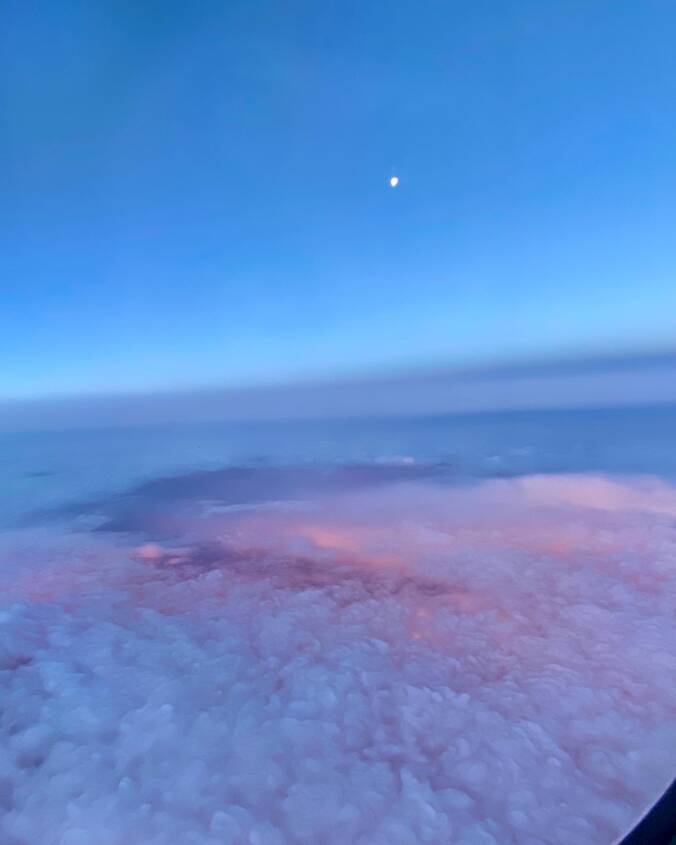 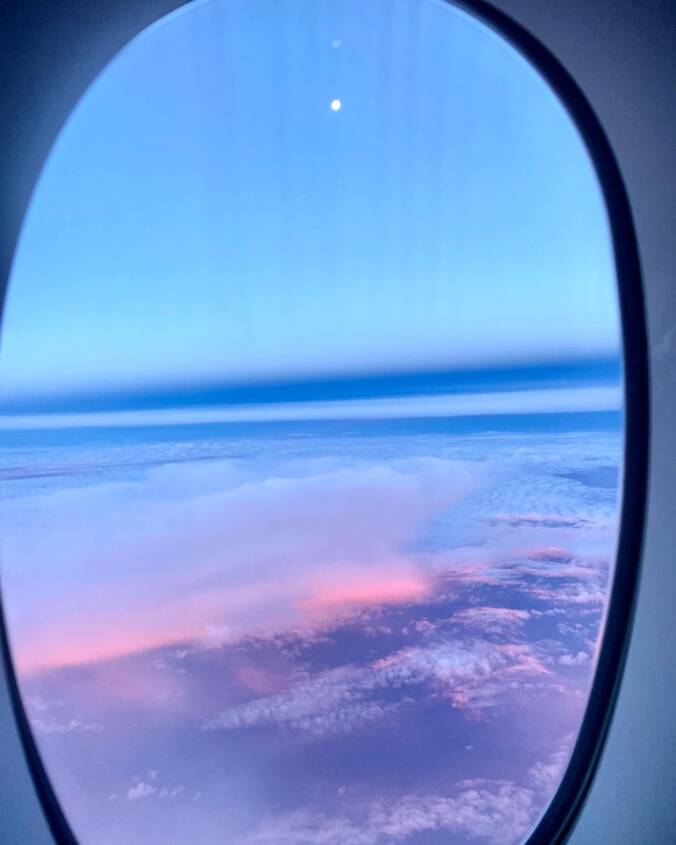 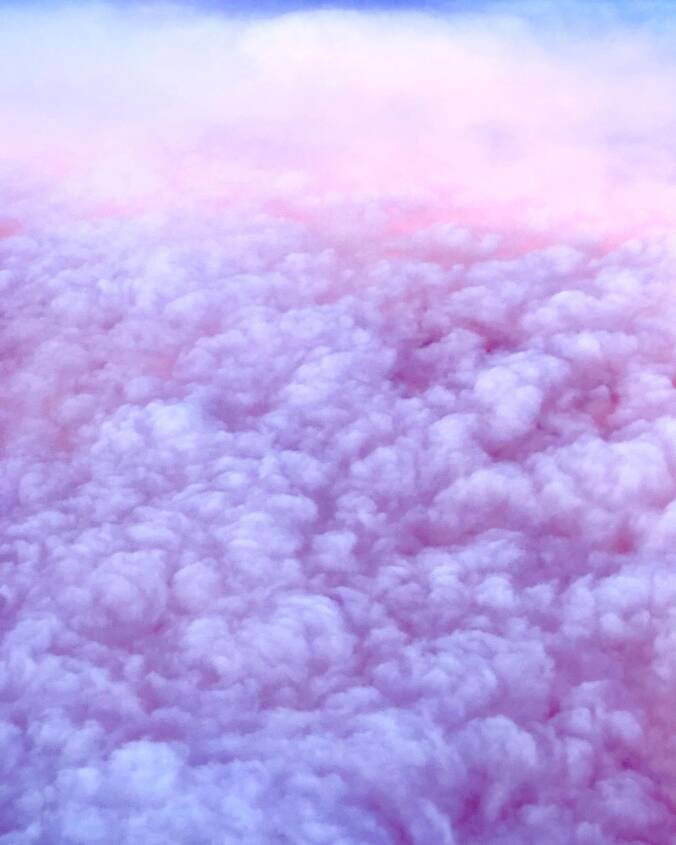 Rocky’s flight got delayed and then he missed his connection, so he is only going to get to the hotel after 19h00 tonight I guess, there is lots of traffic going in our direction.

When we came in to land just-now I could still see the snow on the mountains, its still early Spring here, its going to be cold-riding for a few days yet to come. 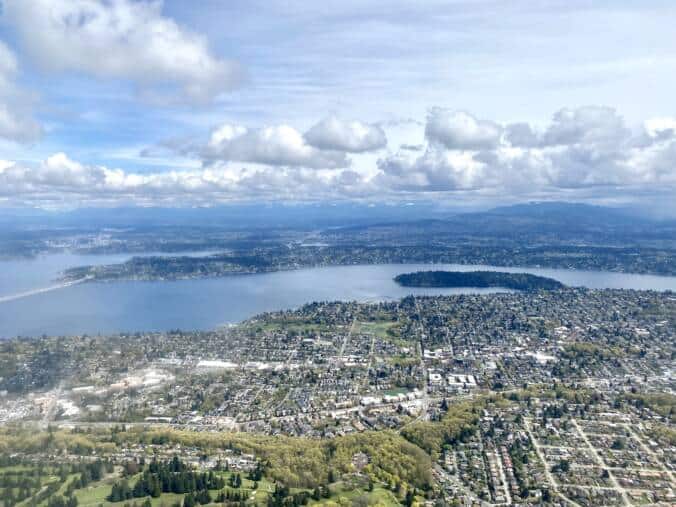 We are going to start heading South tomorrow, the weather should improve daily as we head away from Canada down the West Coast. Its nice to finally turn South, for long we headed East, then turned North before in 2018 turning West, then North again to Alaska and then the run South started, South America is South from here, we need to get there before we are too old to swing our legs over the motorbike’s saddle.

I don’t know if I will get time tonight to write a long Blog with many photos, but I will definitely try.

Sadly it looks like my trip is over before it has even begun. My bike was ridden back to the hotel by one of my mates, I dont want to ask who, but the front bit of my bike key has broken off, about 2mm is missing, its not in the lock as other guys keys can go in, mine wont go in. We filed it and tried our best, but the key wont enter. So tomorrow KTM will come to collect the bike on a trailer and we will see what can be done, but it sounds like there are lots of electronic issues and a key is paired with a bike, the anti theft also comes into play. Under normal circumstances a key is ordered from Austria, but it will take several days.

Where are the Spare Keys I hear you say? Well, that is the mystery. We “broke” into my bike’s seat, or broke in under the seat, we did find a spare key, it belongs to Peens, but under Peens’s seat is no key for my bike. We looked and found spare keys for all the bikes on other guy’s bikes, but not one for me. So, now everyone is looking like crazy in their luggage and in their riding gear, but I have very little hope.

Here are some photos of the last few hours, chaos, everyone is getting ready to leave in the morning, I am less confident I will be riding off into the sunset with them. 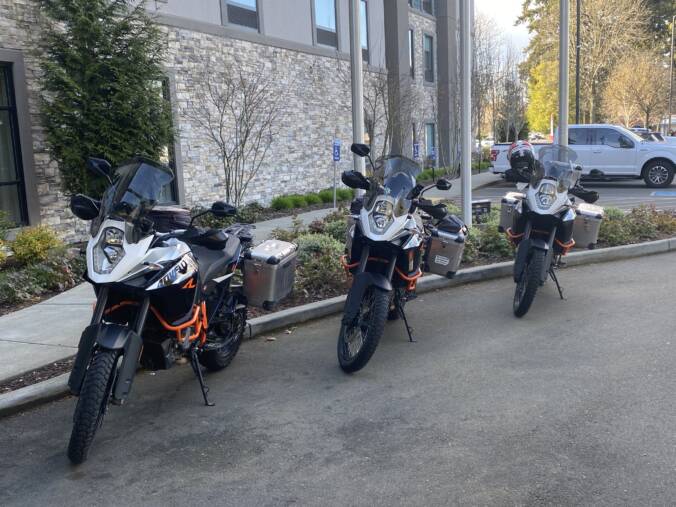 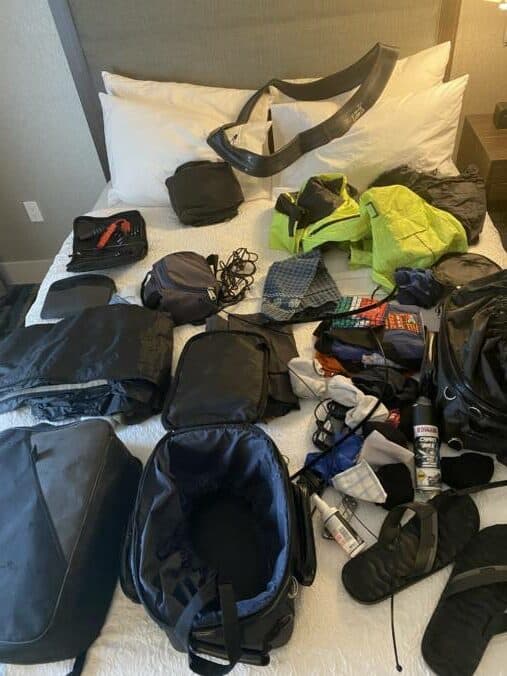 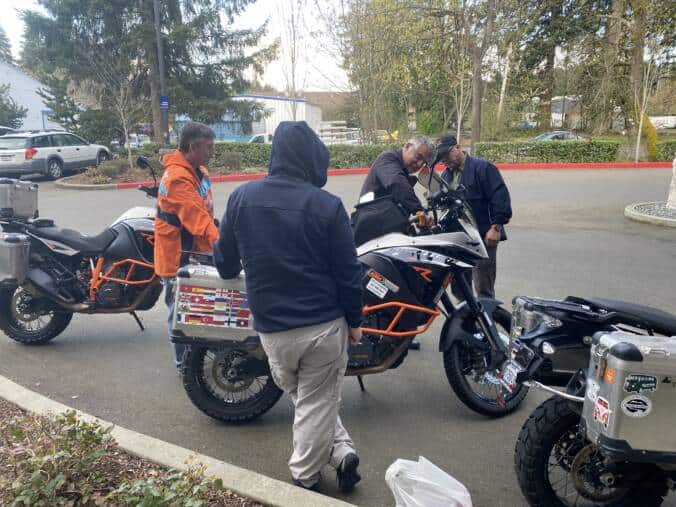 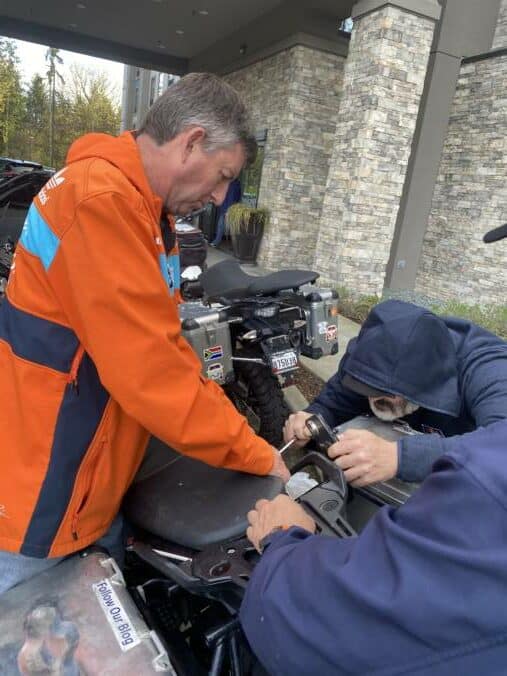 My key is on the left, it is only a few MM shorter than the other keys, but it wont go in!!!!!!!!! We are now phoning Locksmiths, but it is 9pm and no one really interested in helping. 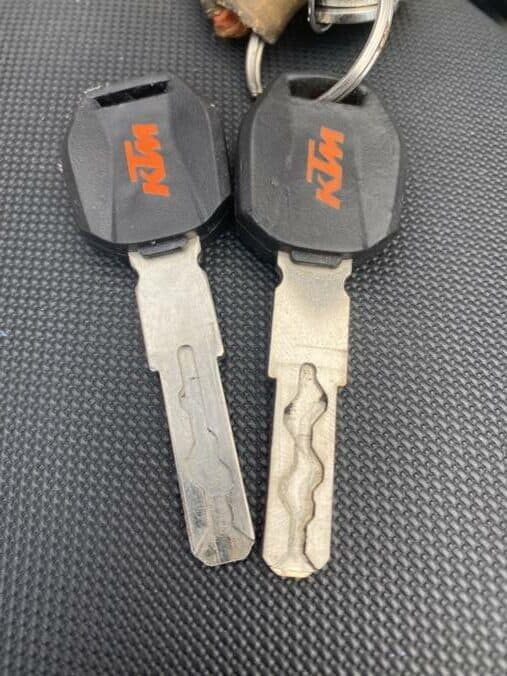 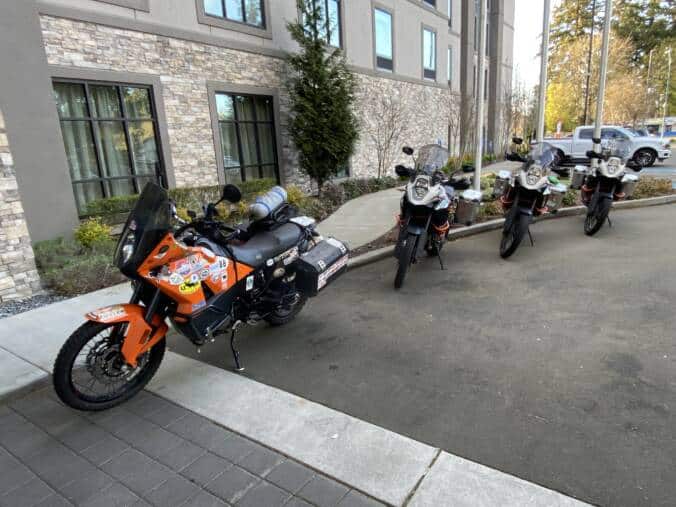 I put my new bags on-top of the panniers, “all dressed-up, but no key to go.” 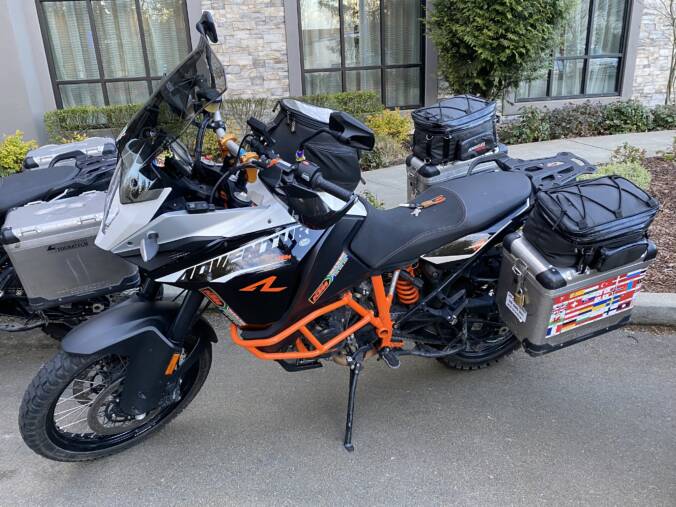