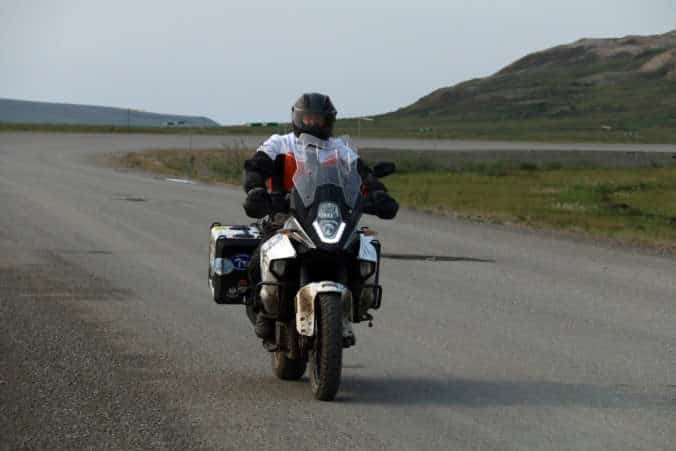 Yesterday after catching up with the Blog, I went for a ride around Dead Horse:

The food is very good at our hotel, everything was free, last night we had Salmon and Chicken for dinner, there was a Salad Buffet, selection of cakes, Cooldrink Machine, Juice Machine, and a Soft Serve Icecream Machine with a selection of things to sprinkle on top.

This morning we took the tourbus to the coast, I thought it was going to be a waste of time, but wow, was I wrong, it was a proper tour of the Oilfields by a retired cop that used to work in Dead Horse as a policeman, mainly traffic police work as there are is no crime, bar-fights or drunk people. If you are caught with alcohol you are put on the next plane out, your boss has to pay your air-ticket and your belongings are mailed to you, you cant even go and pack them, and that is also the last time you will be employed by the oil companies.

I had to take these photos through the window, so not very good, but worth showing you:

I the Polar Bear Tours were just a tourist catcher gimmick, but in the winter when the bay is iced-up, the polar bears walk in off the ice and wander around the oil-field. The tour says they see them sometimes in Summer, and when the bus did its only stop for those wanting to swim, he told us that if he honks his Horn 3 times that it is the sign to return to the bus running as he had then spotted a Bear.

There are several of these busy drilling for oil, mostly they are drilling in old wells, in the past they just drilled down, but now allows them to drill at 45 Degrees in several directions. But in the winter, these rigs are moved to other positions, it gets jacked-up, many wheels are placed under the rig and then it is moved to another position, at 5 miles per hour. There is a guy who constantly monitors the tyre temperature to ensure the wheels overheat, in the minus temperature.

The entire oil-field is pressurised and the oil is not pumped out, it just comes out from the pressure. They pump the seawater down to below the oil underground, 3km down, and they the gas to above the oil, so the gas at the top and the sea-water at the bottom the oil together at the depth they then have their pipe going up to the surface.

The oil comes out of the ground very warm, and then it is pumped with the Trans Alaskan Pipeline which we have been riding next to for days now, down to Valdez, but along the way they have to heat the oil again in the pipe to ensure is stays liquid enough to be pumped. They are pumping 450 000 Barrels of oil per day at the moment, but in the 80’s when the price of oil shot-up, they increased the volume to 2 million barrels per day, but to do so they have to add a lubricant to the oil that reduces its friction so that it can be pumped faster.

When they need to plant a pole in South Africa and most other places in the world, one has to concrete the pole into the hole in the ground, but here they just drill a hole, larger than the pole, pour water into the hole and the water is then frozen by the permafrost, freexing the pole onto the ice onto the premafrost.

We cant understand how cold the winters are here if you take a cup of coffee and throw it up into the air, it freezes into droplets (vapourise) in the air. There are three of driving protocols in the winter, Phase one means you can drive but have to constantly monitor the weather report for the weather, phase 2 means you have to have your Arctic suite, gloves and hats with you in the car, you have to have a buddy that you check-in with every 10 minutes by two-way-radio and you have to report back when you have reached your destination. but phase 3 means you follow a show-plough or grader in convoy and you follow the orange poles next to the road, from 1 to the other, often all you can see, one at a time (they are 6m apart,) and when you get to a crossroad there will be a double pole telling you that you can now turn as you cant see the road.

After the tour we jumped on the bikes and turned them around South along the same road we came on over the past two days riding.

We slept at Wiseman again and I took a few more photos around Clutch’s Cabin, spring was in the air.

But before Clutch Bar-B-Qed some Pork Fillet and Potatoes for us hedecided to start the old rusted jeep which I thought was just part of the rusting-away-display.

After dinner Clutch showed us how to Pan for Gold using some soil mined from his claim:

After dinner we went into Clutch’s tiny one roomed cabin, sat on his two Barber-Chairs and kitchen chairs and he played us old videos taken in Wiseman when gold was discovered and the population was over a 100, today there are only 14 residents in Wiseman, and in the winter even less.

Here are a few photos of riding that I have not posted before:

Tomorow we head back to Fairbanks where Pie’s wife and Tex’s girlfriend is meeting us to follow us in a hirecar as we are going to be going to the tourist spots and parks for the next 3 days.