I am sitting in the kitchen of my cousin and her husband in the town named Cary writing this blog. Just-now the rest of the group will arrive here from the hotel where they are staying tonight as I am staying in 5 Star luxury with my cousin. We are off to the local brewery and then out to dinner. Tomorrow Rassie is taking us on a breakfast run, he is also a type of collector of bikes. He buys bikes that were in accidents from the Internet and then change them and improve on them. He has a clooection of bikes, mostly from the 1980’s  he first up-grade their brakes and suspension and then manufacture parts for them to make them look different, and he has a proper workshop with all the tools, even those for Shaping metal, a Planishing-  Hammer, a metal Lay and many tools including an English Wheel (for taking out dents.) Some he adds new panels which he makes out of Fiber-Glass. Have a look at this. 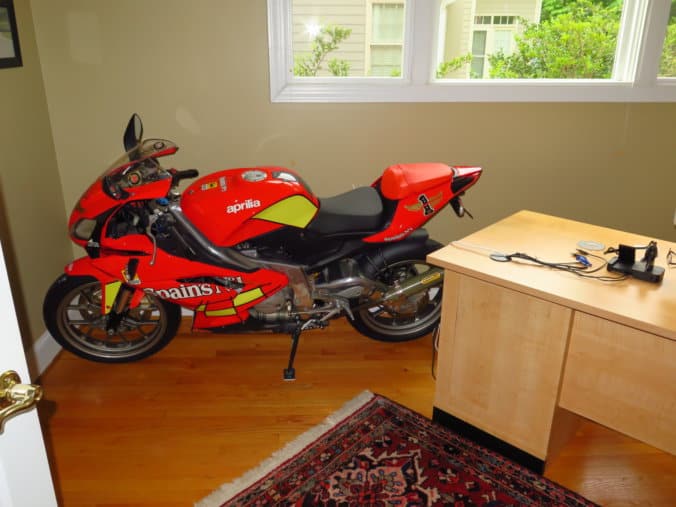 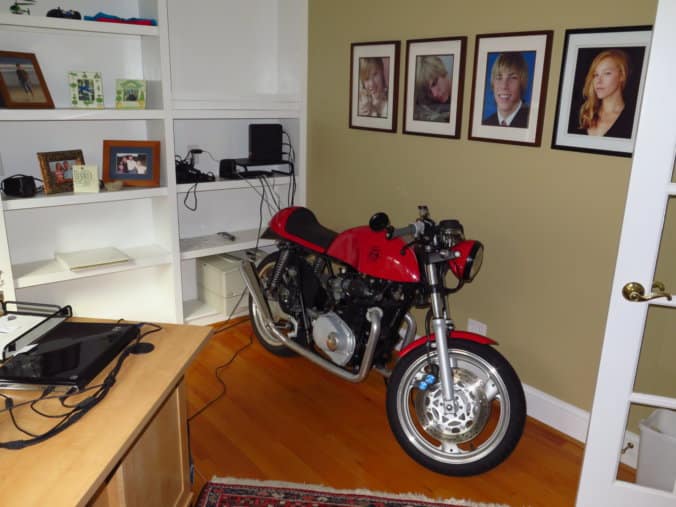 Below are several bikes, the one in the middlone is his track bike, 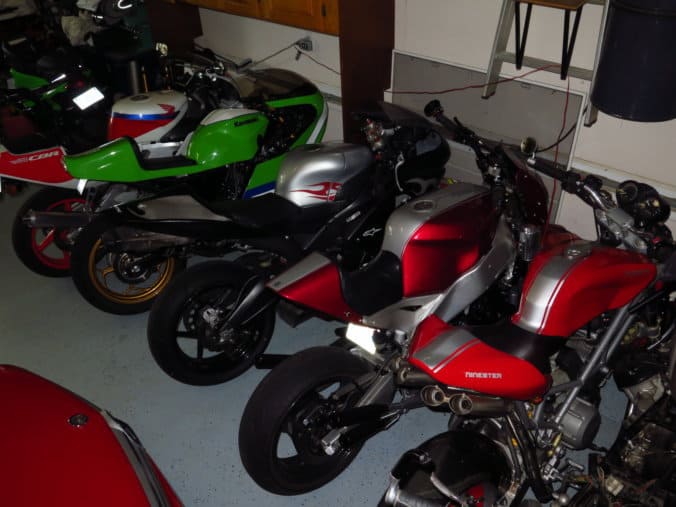 His current project is this 1967 Honda CL 90cc which he is going to convert to a replica of 1966 Honda RC116 which was a 50cc which racer which won many races that year. 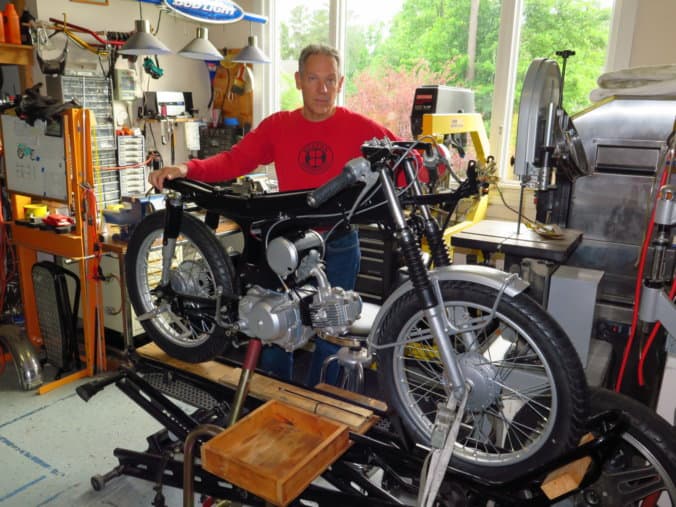 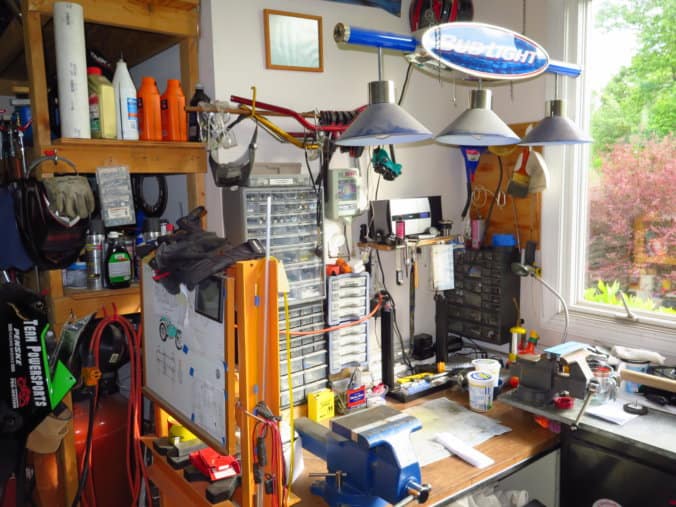 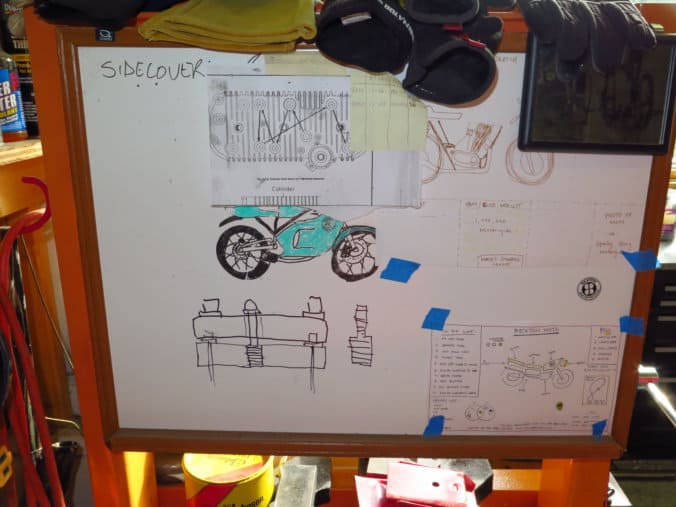 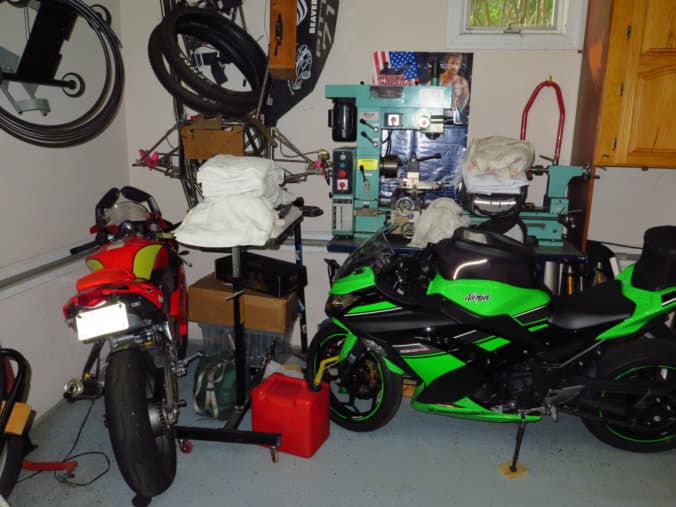 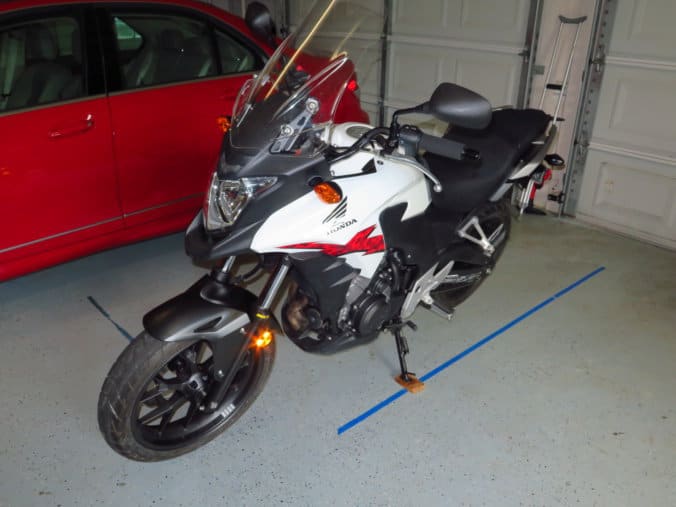 See the bike below, this is what it look like from the factory, he has two of the same bike, BUT… 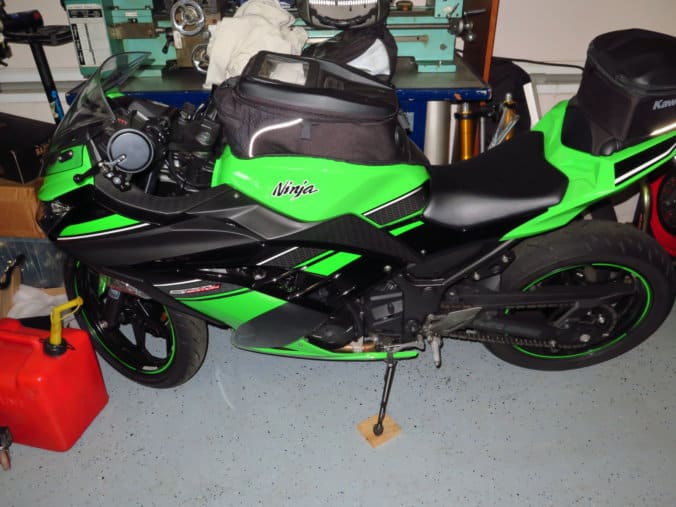 This is the other one and see what it look like after Rassie worked on it. 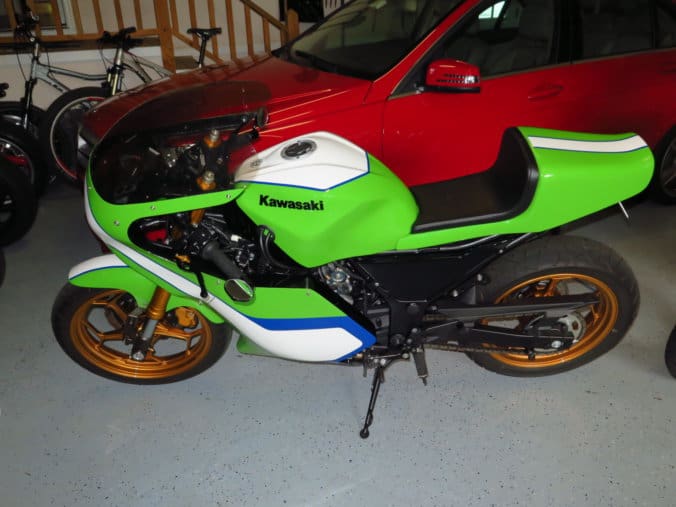 The bike in the middle is his track bike, but see the 620 i Ducati on the right, it used to be a Ducati  Monster which was in a cash and arrived with bent sub-frame and all the body panels were damaged. So Rassie moved the electronics under the seat and made some new exhaust pipes and changed a few things around, what a stunning result.

This morning Pie and Tex left to ride to a town called York to go and look at a Motor Pie wants to buy which left only 3 of us, Rocky, Milsy and me. I lead our group onto the hi-way 95, the plan was the same as yesterday, do about 200km on the hi-way and then get off and spend the rest of the day on the scenic back root, no longer Route 15 but now Route 12, still heading North. As I got on the on-ramp I looked in the mirror and saw no bikes behind me, so once again I did a U-Turn on the on-ramp and headed against the traffic back to the main road, Milsy’s front tire pressure was below what the aunty in the computer required. After about 15 minutes we eventually got going.

Once we turned off onto the small road everything came together again, great forest road winding alogn and passing through small little towns, each with a Small Fire Station and I notice all these small towns also has a little Nail Bar on the main road going through the town, these country women must all have perfectly manicured nails?

At our fuel-stop I started speaking to the owner of this “caravan” and I now I want to have a look inside one of these, but they have to first “open” the “slide-outs”, this model has 5 sections that slides open to make the inside wider for more space. This one costs R1,3m and has a fire-place and entertainment room inside, you dont do much camping, it is more like taking your house and all the luxuries with you, from Satilite TV to a very large bathroom and toilet, you simply connect all the plugs and pipes onto the sewerage, fresh-water and electricity when you stop at the RV Park and then you dont have to worry about looking for an ablution block to shower. I hear the kitchen inside is something to see, so watch this space, will have to look inside one of these in future. 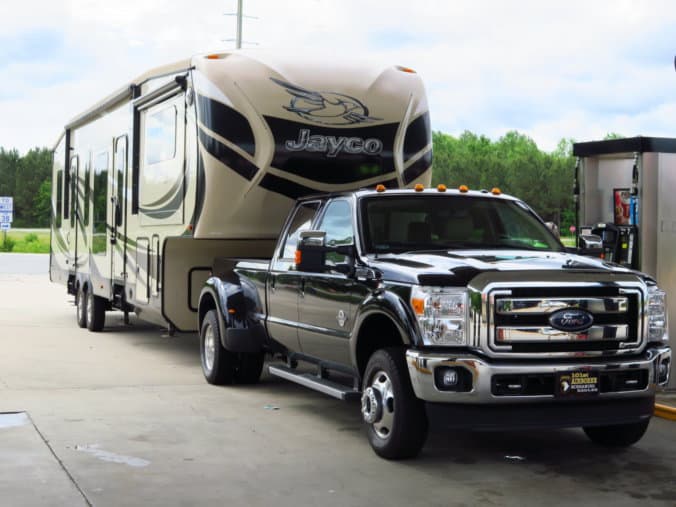 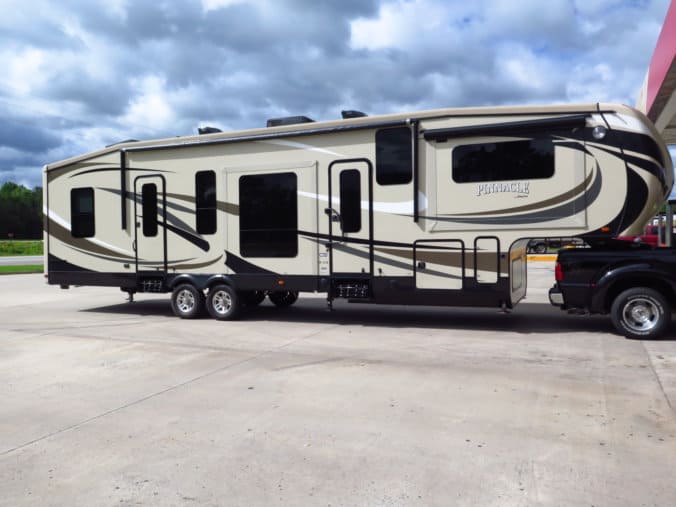 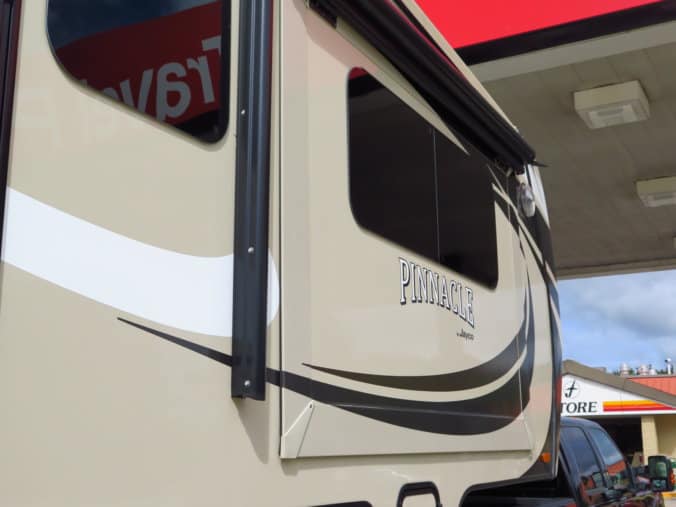 See ‘slide-out’s” pannel for the one bedroom above.

Below are 3 slide-outs for lounge and kitchen and TV Room, just under each of the black awning looking things. 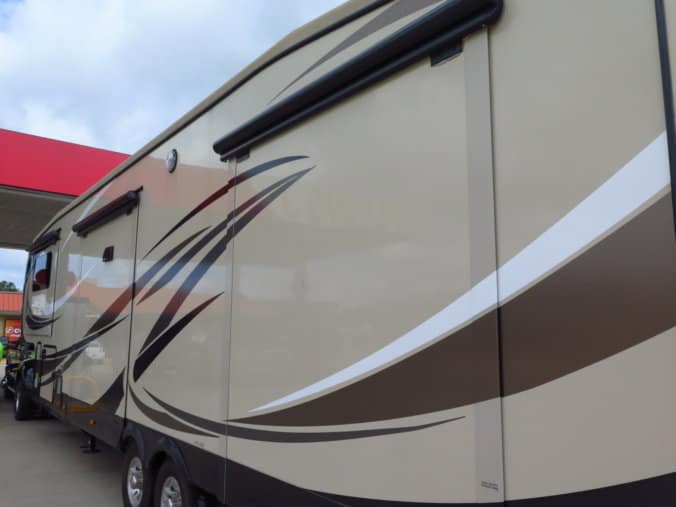 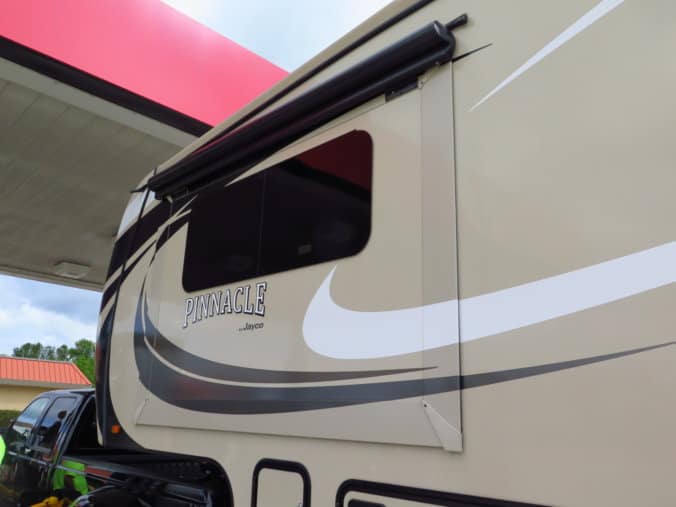 The owner says he gets 9 miles to the gallon, about 4km to the litre which I think is not bad for such a big motor (V 10) and pulling such a weight.

We crossed out of the state of South Carolina into North Carolina. Note the forrest trees in the back ground, this was what we had to ride along today, sometimes the trees hanging over the road covered it and it felt like riding in a tunnel. 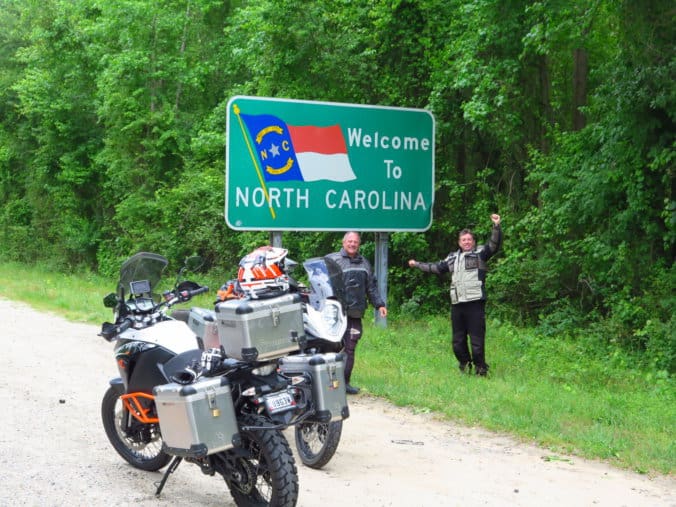 We stopped off at a mate of Milsy in Chapel Hill and had a beer with him and his lovely family. Have a look at this fridge for the real beer lover, it is a mini Draft-Machine for pouring your own beer at home. 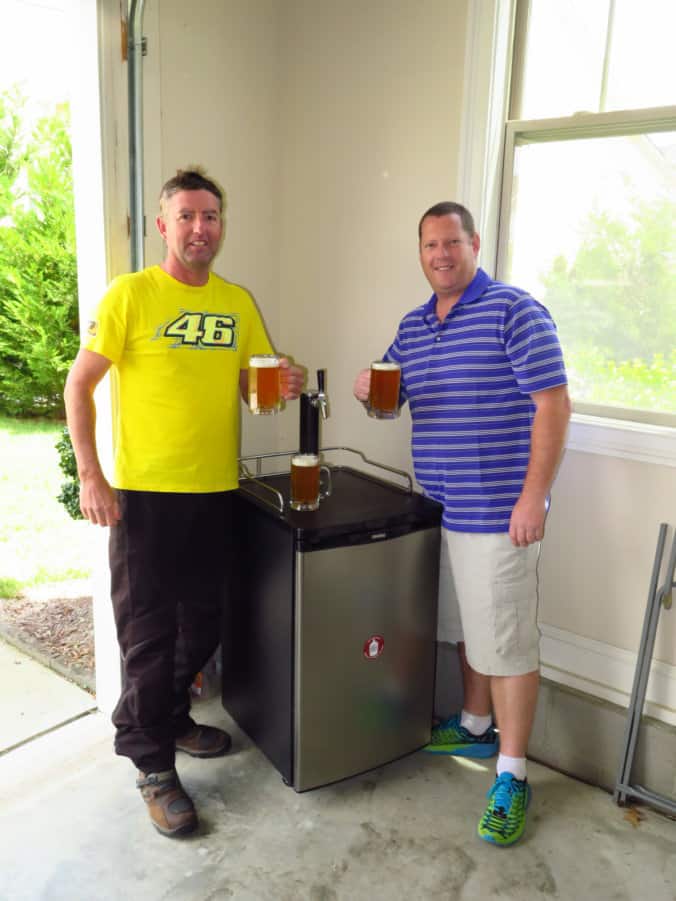 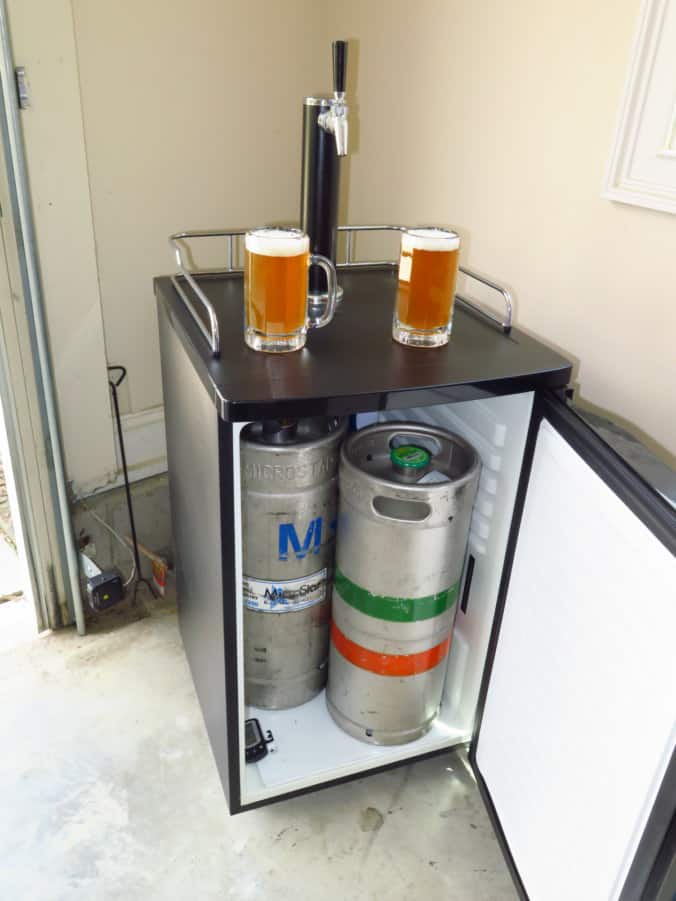