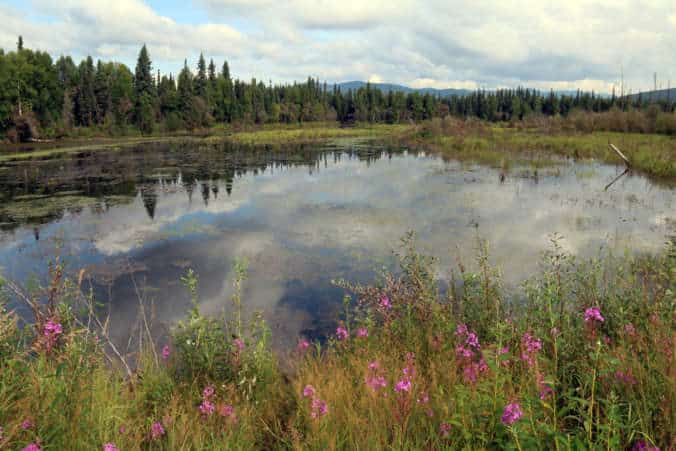 Today is seen as a Rest-Day as we only rode 115km today. We slept late and only ate “Breakfast” at 8h00. Breakfast at a “Super” 8 is not Super, and one can’t expect much, you get what you pay for. It should rather be called “Morning Selection of Starch with Coffee and Juice” as one get starch in many forms, with weak coffee and Juice, not an egg in sight and the pigs also did not have to get involved with this Breakfast as no bacon was used in the preparation of this breakfast.

After Breakfast we took the bikes to the local Car-wash to wash off all the toksic mud that we got onto them over the last 4 days on the Dalton Highway. What they use on the roads is :

The bikes looked like new, we then did some maintenance, adjusted some chains and waxed the chains, then we packed away the Rain Gear as it was nice and Sunny.

Then the group split-up into three, the two guys with their better-halves and Dog took the Hired Car to deliver a package in Northpole to a couple who’s family are still living in South Africa, so they played Santa in Santa’s back-yard, then they went in search of a trailer to rent as we were not able to get a new Sprocket and chan for Dogs bike in Fairbanks, we are having one sent to Anchorage, but we still need to get his bike to Anchorage and the jury is out on that if thew bike will make it. This is what the teeth on a back-sprocket should look:

Peens jumped on his bike and took off to Anchorage area in search of catching a Halibut. He had caught, Salmon, upside-down Salmon, Cod and Trout but when he wanted to catch Halibut his licence was only valid for Halibut on a Tuesday and Thursday, and to think that the people here control the very expensive Fishing Licenses is really impressive.

Rocky, and I took the Chena Hotsprings Road and rode the 100km to the springs where we later met the others.

The ride to the Hot Springs was a small little tar road that runs next to the Chena River, with many Boat-Launch sites onto the river, there are several parking areas where you can park your car and go for a hike, where you start is called the Trail Head.

Many people could be seen standing deep into the water wearing Waders, catching fish. There was so many little Beaver-Dams (built by beavers to dam-up little streams,) and small ponds all along the ride today.

And then we got to:

This is a Resort, very much like Buffels Poort or Warm Bad, where families and lovers come to hang-out. There are many activities one can do, like going on a tour to see the Husky-Slay-Dogs at their Kennels and learn about the winter sport of Slay-dog-racing. There is a race over the sea between Russia and Alaska when it gets frozen and it takes the dogs only 22 hours to race across to Russia, and it is a big thing here.

One can go to the Geo-Thermal Power Station and many other little tours, but as it is my Rest Day I will only do one tour, the Ice Museum Tour, in a big deep-freeze. First is the workshop where they make all the -carvings. Here this lady is making Martini Glasses as they serve their drinks at the bar in ice glasses.

There were many big ice carvings but the lighting for them were not very good as they were just too big to light-up properly, making it very difficult to photograph.

This is the little vehicle they use to take the tourists up the mountain to a type of glass igloo where they then sit and watch the Northern Lights. These are only visible in their winter when the sun never shines.

Because the Winters are so severe up here, the people make the most of their short summer to plant some flowers and the gardens are in full-bloom everywhere one looks.

was in the water of the Hot Spring Lake 1st, much warmer than his last swim, here the water bubbles out of the ground at 74 degrees Celsius.

My cousin who stayed in Canada and is more familiar with Musk-ox tells me they are the only animals that dont migrate South in the Winter but stay inside the Arctic Circle for the entire winter, staying warm by standing in a big circle:

But I hear they are not the most cleverer animals and dont try to flee Bears (only Polar and Grizzly bears) who then catch them and eat them.

I forgot to mention that we did see a Wolf yesterday, so it is really now only the Grizzly Bear that we have not yet seen.

If any one of you ever do the Dalton Highway I suggest you look Clutch’s details up on the Internet, here is his sign: