I must say, it was a frustrating waste of time to get going yesterday, but I can not blame Tony (our Fixer) or Zhu who works in their office as from their side everything was very organized and if it was not for a new boss that took over customs it would have been done before noon.

I also have to just say that the Tour  Operator we used in Ulan Bator to arrange the two nights at the desert camp, Nomadic Journeys were also superb and I can recommend them for anyone wanting to experience Mongolia, we just did not have enough time, but maybe I can return oneday with my friend Karl who is a big fisherman to go and try to catch a “giant trout” they often reach 1500mm in length and weigh 30kg !!

And while I am punting these two businesses that gave us such good service, I have to mention our other riding Buddy Pieter who is busy organizing a great event in the Northern Cape, around the 9th to about the 11th of October I think, where there will be top-notch Adventure Riding on different routes everyday, good food at night and some late nights around the camping fires, (and it is in the flower-season as well,)  if you are interested in the details just get in touch with me so that I can get you in touch with him, we all remember the BMW GS Challenge, and the KTM Rally Raid, well this is the same recipe, don’t miss out on it.

The police lady that had to issue our drivers licenses and number plates came to meet us at our hotel and all she wanted was a photo of the chassy number (under the handlebars) and of the engine number (under the seat.) We were surprised when a very well dressed lady (in high heels and a mini came to issue the paperwork. 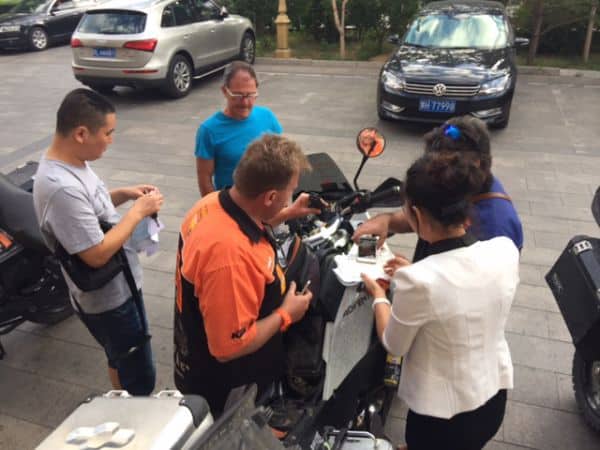 Last night we went to eat street food and we will in future not sit to close to the street again as we cause traffic-jams when the locals stop to stare at us, then leave their car or bicycle in the road to come to have a photo taken with us. I suspect Greg might be the cause as he has a beard and shaves his head and in China the men don’t go bald, and don’t have facial hair either. We really were made to feel welcome in Erenhot, which is a small town, but as all the towns we have rode through today (motorbikes are not allowed on the major roads or highways, so it suites us just perfect,) all the towns and small cities are new, it looks like it was built yesterday. 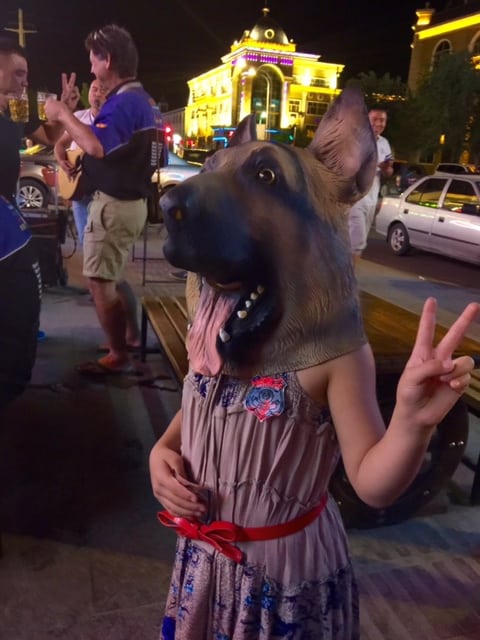 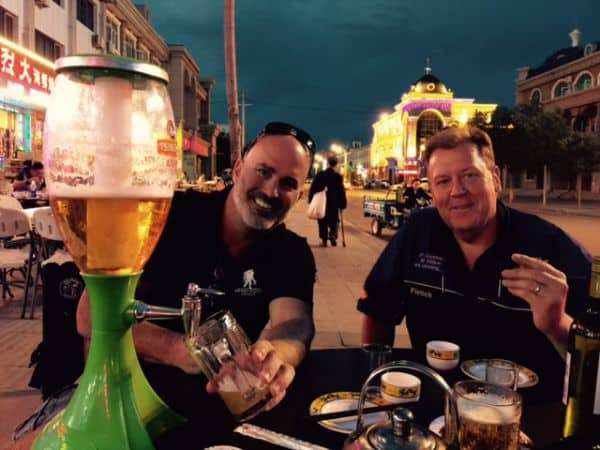 And they are still building at the speed of light, there are many (about 30 I guess,) empty apartment blocks standing empty, and they are 20 floors high blocks of concrete, but they have not yet been glazed, they are standing ready for when the people move to the city to go to work in all the factories and Industrial buildings they have built, also still empty and waiting for the influx.

Nothing is done in half measures, the traffic management system, roads etc  were well designed and no traffic jams apart from some traffic lights taking 2 minutes to change from red to green.

Today we stopped just outside Erenhot as we were leaving town at the Dinosaurs, (Erenhot is famous for all the Dinosaur  fossils found in the area.) 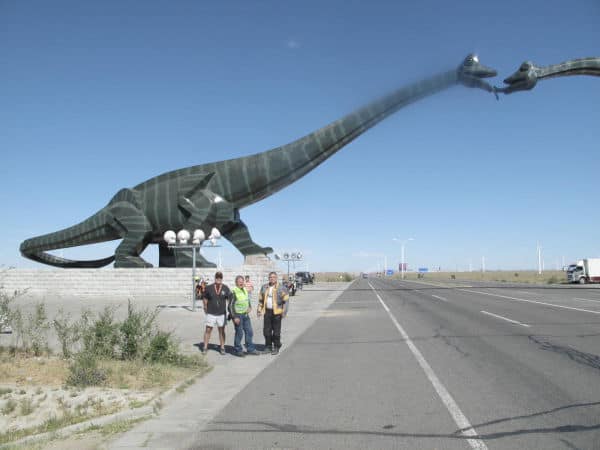 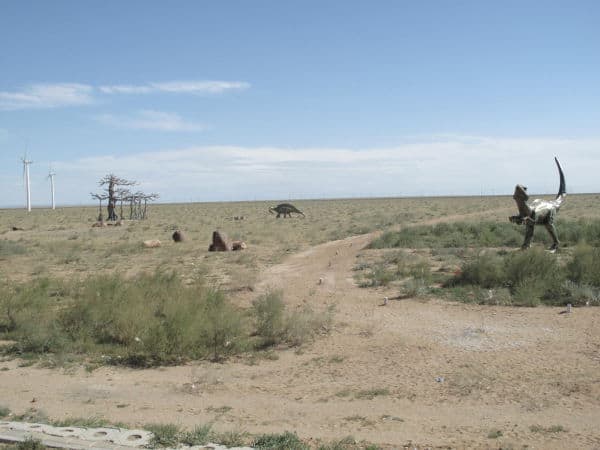 Once Again the locals jumped on the back of the bikes and posed for selfies with us. 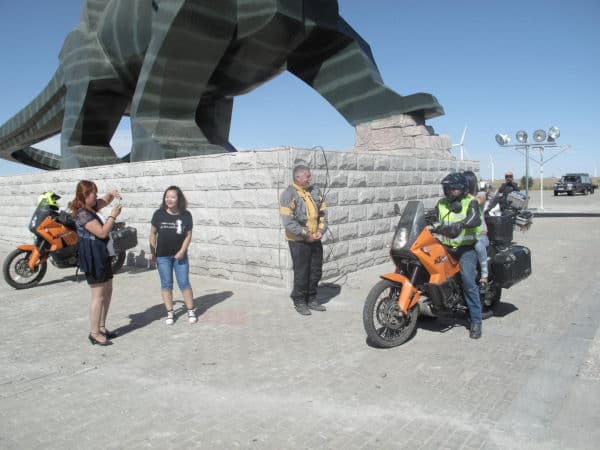 We looked for a place to stop for something to eat at lunchtime but things are different in this very rural part of China, eventually we stopped and bought 3 different type of Melons and are that next to the road for lunch. 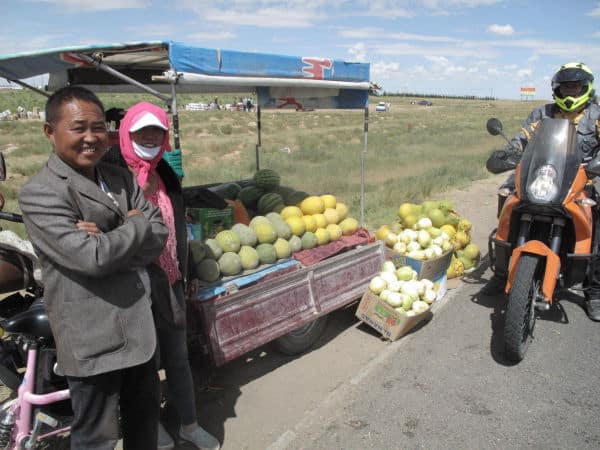 Tonight we went to eat at the little street “restaurant” where the local people eat and others buy and sell their vegetables and more melons. 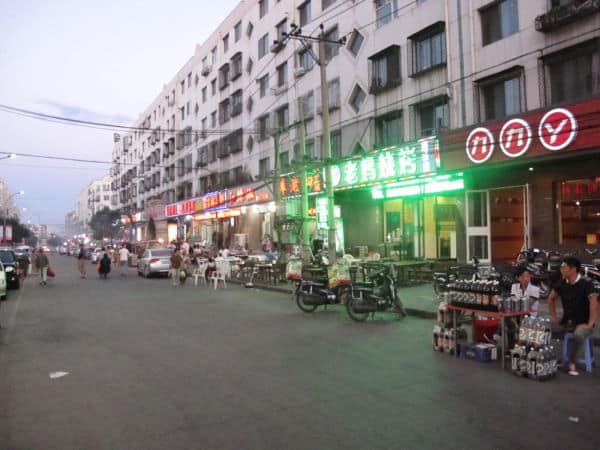 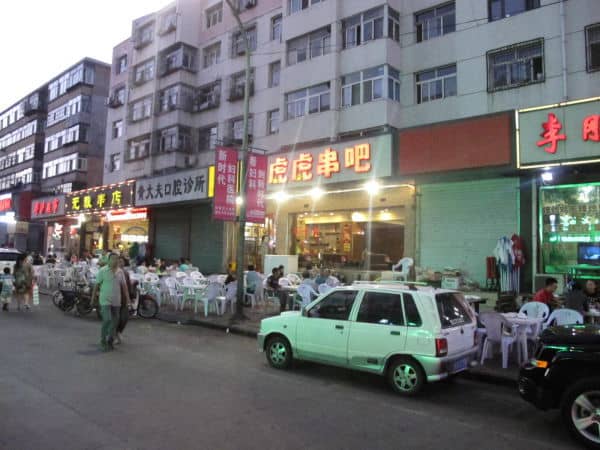 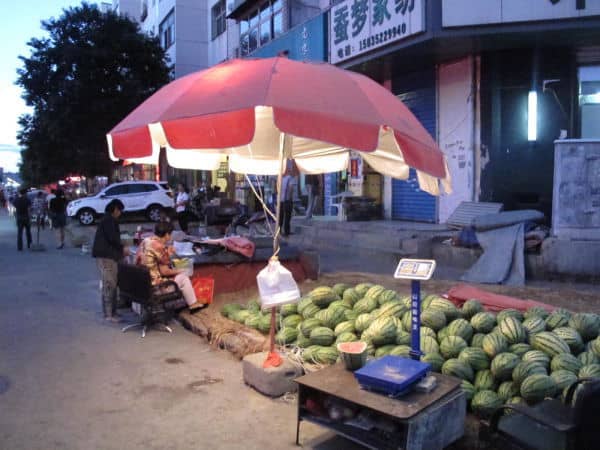 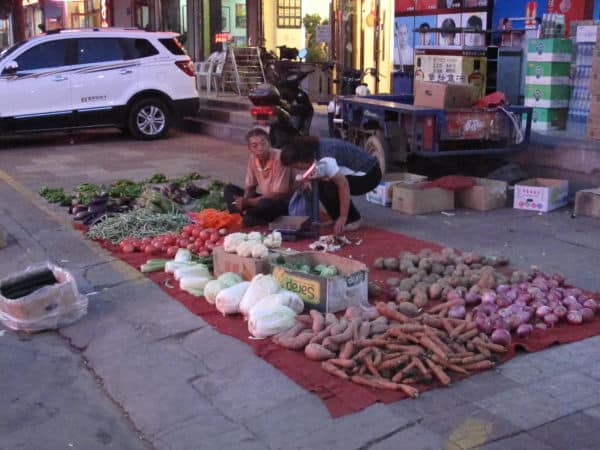 Another use for an old bed. 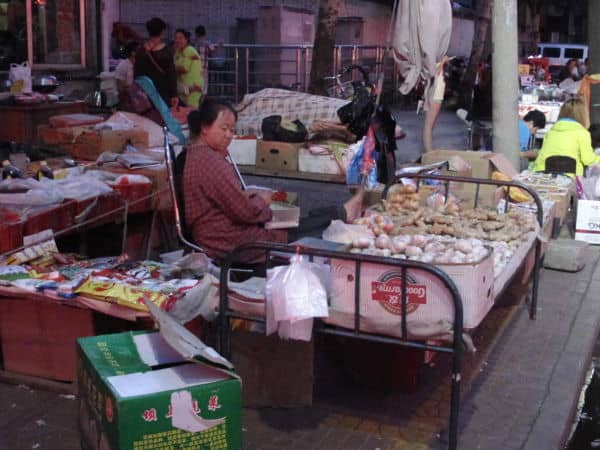 All the little restaurants in this street sells kebabs grilled over wood-fires and the kebabs are very thin and coos very fast, even vegetables are neatly skewered, and tonight I tasted the best green beans, Green peppers and mushrooms grilled over the fire. 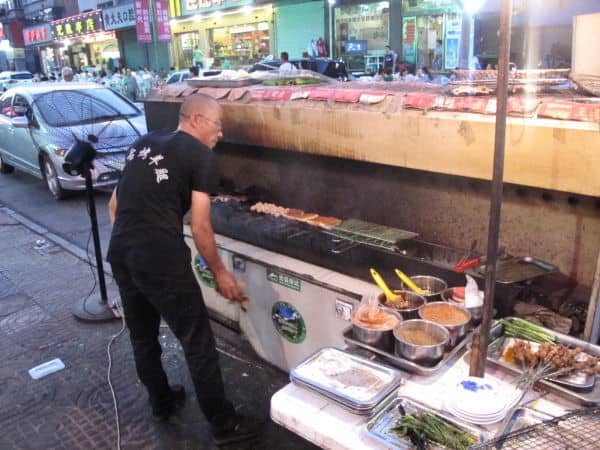 We rode the whole day just to cover 500km as the roads are narrow and there is a lot of very slow traffic on the roads. These vehicles are the local peoples Vans, or “Bakkies” as we say in RSA and in the photo below they are full of produce, but these vehicles transport bricks and bags of cement and are all over the roads in large numbers. 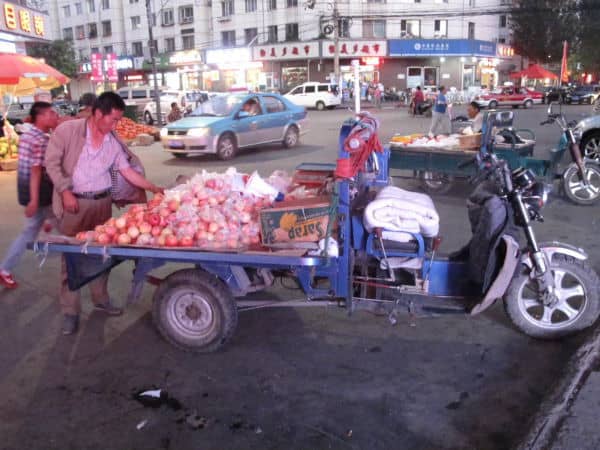 Tomorrow we are stopping at the Northern parts of the Great Wall of China that stretches all the way this far.