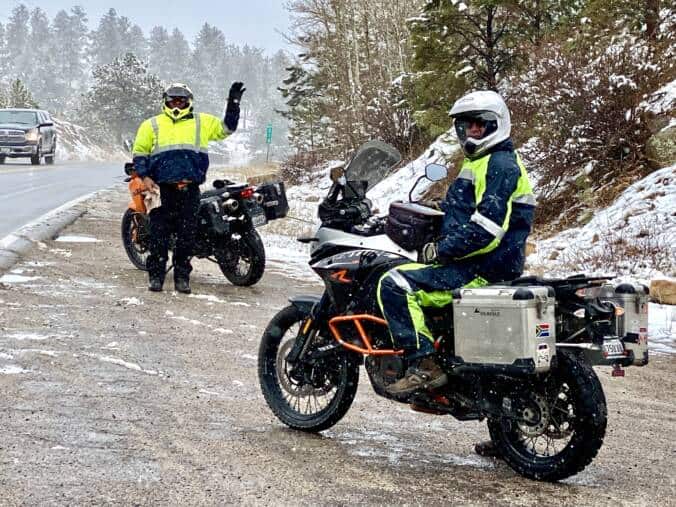 As I pointed DadAss North East this morning and rode out of the Motel  at exactly 7h30,  the time we said we were going to leave, (half the group left at 7h15 as the horse had now turned and was bolting back to the stable,) and the other half left at 7h45, (as they arrived late yesterday evening after Peens thought he had met the love of his life on-route at a Pizza Restaurant 15 miles back, so they never filled-up with fuel and first had to go to the Gas Station,) I thought that today was going to be a good one, if the sign in the Bates Motel’s window was anything to go by : 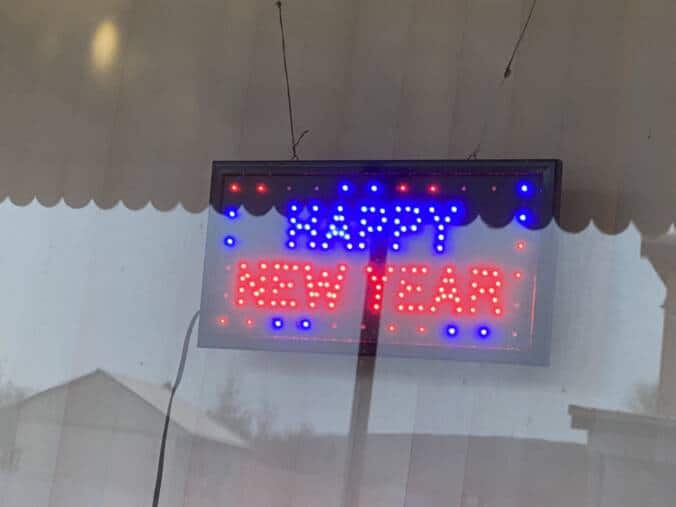 I rode hard to catch Group 1, there were no cars on the road, and every time I saw a car approaching I would slow down to 104km per hour, which is the Speed Limit on the open road as the Cops here has a Radar fixed onto an approaching vehicle and if you are speeding they make a U-Turn and chase you down. But as soon as the car had past me I would speed up again. So I caught the guys within 40km and had enough confidence to stop for this photo, showing promise of a “Happy New Year Today” 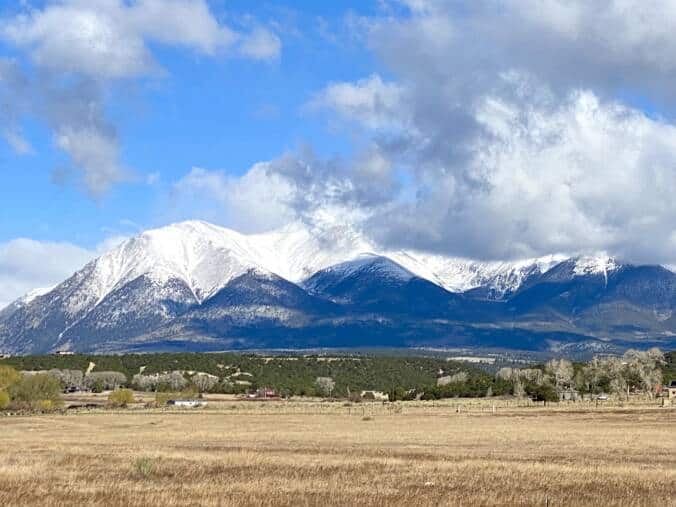 The temperature was at 9 Degrees and the snow  was still far away, visible on the mountains all around us. But then we got closer to another mountain and it looked to me like it had snowed here last night: 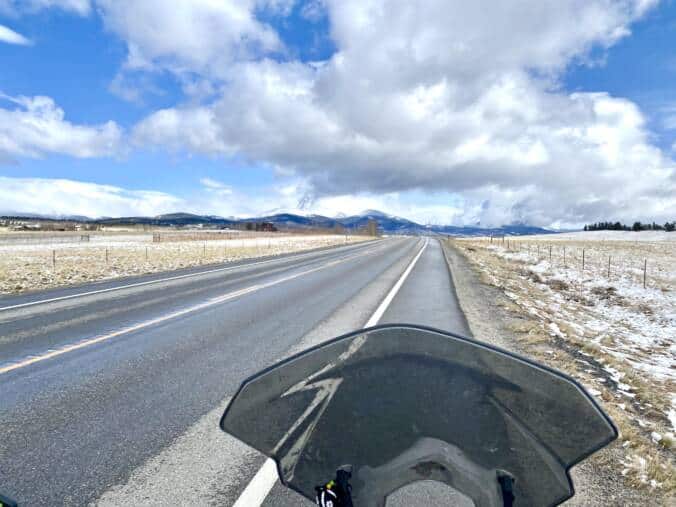 Even the “Kitsch” (yes, Spell Check says I am right,) little bears waving along the road at me showed me that it did indeed snow last ight and therefore it was a “Happy New Yea Today”  as I missed the snow last night. 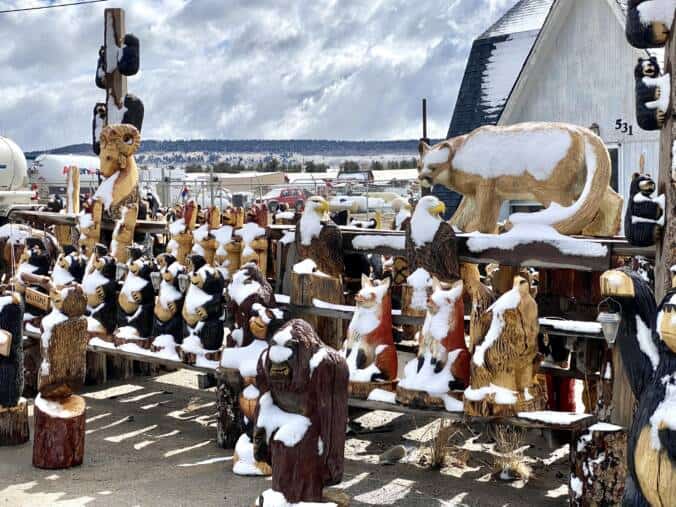 I overtook a guy driving a slow-plough and I thought, “silly little man.” But then we reached the edge of the high-ground we were on (about 2900 m above sea level) and started dropping down, I knew we were going to drop to 1600m as Dog (who by the way, some new readers has asked me about, “why we call him Dog” :  In the past he used to put on his Dog Mask when we took photos, but that mask has now perished and became sticky with old age and he had to throw it away, and now he cant find a replacement for it, (but if you want to see photos of Dog scaring the local Chinese kids you just need to go back to photos from China as that is where we met Dog who came all the way from Houston and drove our Back-Up Vehicle for that Leg,) well Dog told me Denver was a Mile High, 1,6 km. But the clouds were low and it looked scary ahead. 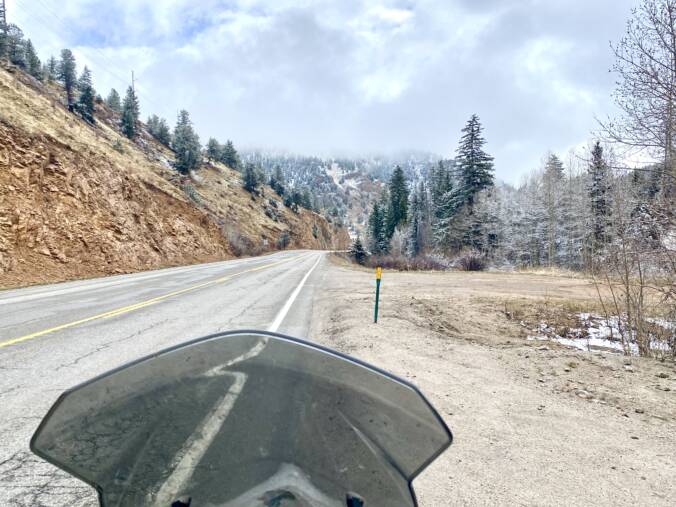 The instrument panel was lighting-up with “Ice Warning” signs and just like that, at that moment, “Twisties” instantly loses their appeal and become Enemy Number 1.

And then it started snowing. the temperature dropped to 0,5 Degrees and we stopped to put on every piece of clothing that you can fit under your Riding Jacket, which in my case, was not too much, as the free space between my jacket and my stomach has filled up with something else over the last few years.

So by the time we got to stop for our Gourmet Fuel-Station Single Course Fine Dining Experience we looked like Micheline People. 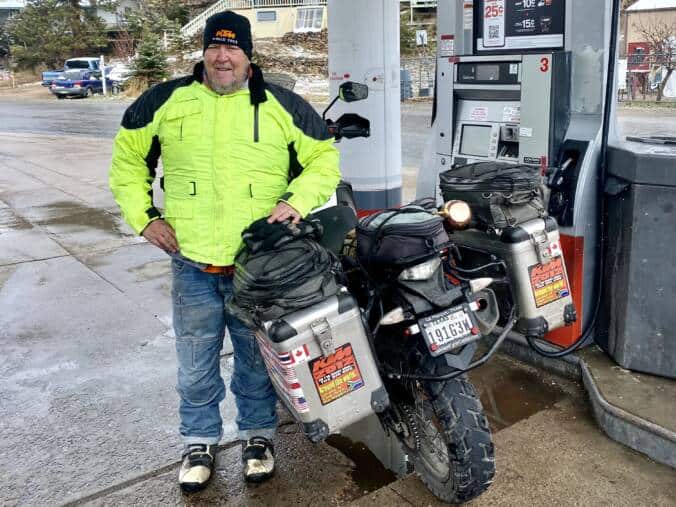 Then I made a big Coffee Blunder, I used the wrong “Cream”  which I poured into my hand drawn, (from a Coffee Flask) into the finest polystyrene cup, as I was so cold I did not have the energy to read the 5 different options available, so instead of just normal Creamer I poured in French Vanilla Creamer, actually I did realize something was wrong when the Vanilla scent hit my mucus infused nose, so I did switch to another creamer, which turned out to be Irish Creamer, sort of a minty taste. So the coffee was a let down as well as the Breakfast Sandwich which consisted of an Ostrich Egg and 1 streak of Extra Lean bacon, placed on a bread roll, wrapped in paper. 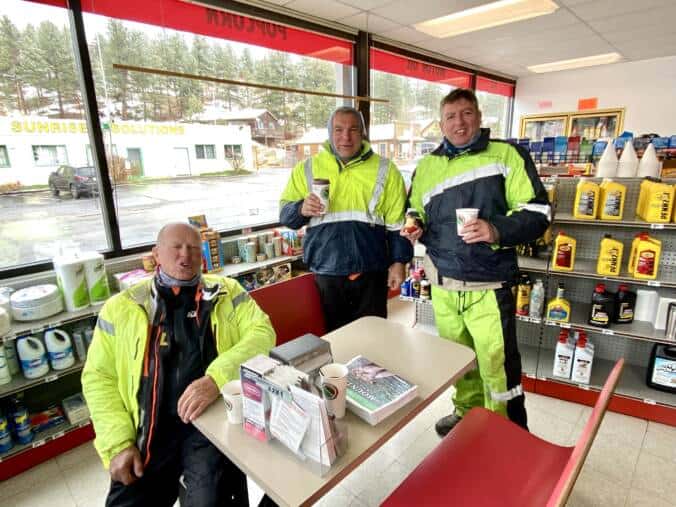 After the “meal” we continued in what was one of the coldest days we ever had in the past 10 years of riding. To keep my brain from freezing I tried to do math’s, (converting miles into kilometers,) but discovered I was riding way under the speed limit due to the Ice Warning Flashing. Then I thought about the last time we rode in the snow, it was 10 years ago on Leg 1, we had to cross over the Piranesi Mountains from France to Spain and it snowed and rained and a blizzard blew. Then I thought of that trip and I remembered we had key troubles on that Leg as well, Peens lost his keys and then Jimmied the lock, only to discover the bike wont start as it needed the chip in the keys, sound familiar??  Well for those of you have not gone back to my earlier Blogs (shame on you,), Peens then found his keys after the damage and placed his keys  inside the hole where an ignition used to be and then turned what was left of the lock with a big screw driver, the bike would start. But as Murph then joined our trip towards the end, this key vibrated out on the roads in Romania, built by the Romans who had no consideration for modern day vehicles with JIMMIED KEYS and was lost and Peens ‘s bike became the 1st bike to be towed behind Brutus.

So apart from the snow and the lost keys and me getting sick, and the same happened on Leg 1, the only other common  denominator was Danny Boy, so I blame him, he is an Agent for Murphy !!!!!!!! He Jinxed our trips.

I honestly thought about other cold days like today, but they don’t compare, yes we had a few cold days in Central Turkey, and one cold day up in Norway, but today, like the trip over the mountains on Leg 1 stands out as the coldest I have ever been on a bike.

But then we arrived at the Storage Unit and the office was heated, so all of a sudden we all wanted do be involved. 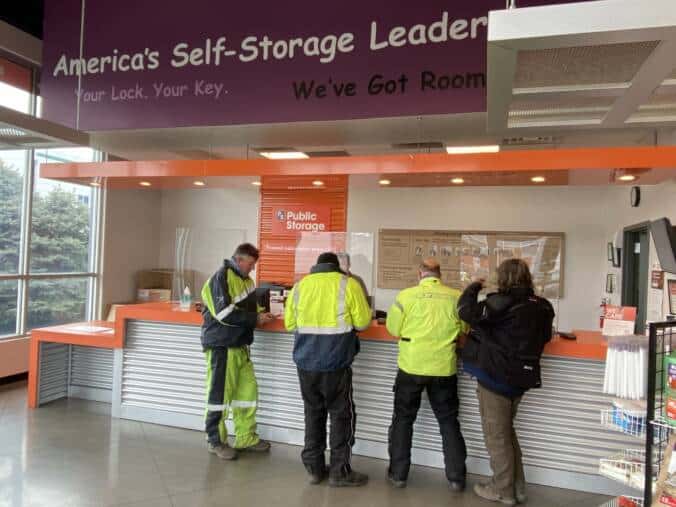 When we arrived at our previous Storage Unit in Seattle we were offered water by the lady and she smiled and asked how she could help us. Today’s lady said that we may not all share a Unit as all the vehicles inside a Unit needs to belong to the same registered lease holder renting the unit from then. We then told her that we will all sell our motorbikes to Tex, for a Dollar each and then he can store all his new bikes in one unit. She did not find it as funny as we did and then said she would do us a favour and write down the contents as something else, (I suggested smelly clothes as there are some smelly cloths between all of us.) 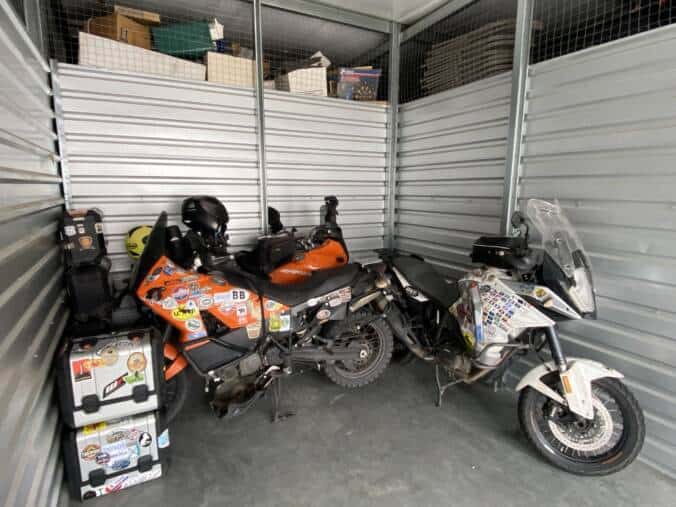 Some bikes were not going to be collected by KTM, others were. So the three that were going to be “serviced: by their owners who would arrive a few days early on the next trip were placed at the back, panniers removed to make space, the batteries disconnected etc etc.

A lot of things are happening now, Milsy’s daughter is flying in tonight, they want to ride a horse in the snow it seems (Milsy is such an optimist, he always see a glass not as half-full, but overflowing.)

Dog introduced us to his lovely girlfriend who I suspect needs to go to see and Optometrist soon as the poor girl must be half blind, and they are driving off for a romantic road trip back to Huston.

Tex is on the way to the airport for his flight at this very moment. Pie is off early tomorrow.

And then Danny Boys “Friendy” (yes I know, not a word) who counted beans with him in Canada arrives to meet up with Danny who is going on a Road Trip across the USA with her. Me on the other hand had a perfectly laid plan to ride to the Toyota Land Cruiser Museum, but not only did the blizzard storm roll into town, I now see that the Museum is not 300km away as I thought, but 800km away. I looked at where it was and now realize I should have turned off two days ago when we were only 300km away from it, as my original plan was,  but then I got sick and my brain went into Neutral Gear.

About my head-cold, I slept better last night and think I might break the bed tonight and then I hope I will be 100% tomorrow. I am swallowing tablets as fast as Pie now.  But what will I do for an extra 3 nights in Denver if I don’t ride somewhere tomorrow ???????? So I am trying to see if I can move my flights forward, if I cant I think Milsy might join me to ride to one of the many Hot Water Spring Resorts within a days ride, where I will no doubt make the mothers hide their children’s faces  under their towels when I come strolling along towards the hot pool wearing my tiger- printed- satin-sleeping-shorts (as I did not pack a swimming costume.)

So lets all wait for tomorrows blog and see what the Universe has lined up for me.