Last night’s Line Dancing, (or Square Dancing) was a disaster. We went to The Big Texas Dance Hall, it was full of Cowboys and Cow-Girls, yes, Hats and Boots are big here. They play mostly Country Music, with some songs everyone lines-up on the dance floor in rows, all facing forward, and then the idea is to all dance together, but one has to know the moves, there is one person in front who leads the group but I did not even attempt this as there is a lot of steps going forwards and then to the left, then a slap of your boots, then a step to the right and more slapping, this time using your hat etc. But then I tried the Square , which I think is called that as one hold your partner far from you, and your arms then make a square with your body and arms. It looked like a type of Sokkie, which I know I can do, but then, after stepping on the toes of the poor un-lucky lady I asked to dance for the 5th time, I realized there is a Two-Step in the dance and what I can do, she told me, was only a One-Step, which was obviously frowned upon in Texas, so I just decided to not at my age learn a new dance from scratch.

This morning we put on our Riding Gear and packed our bags, and after a group Photo, we headed North. 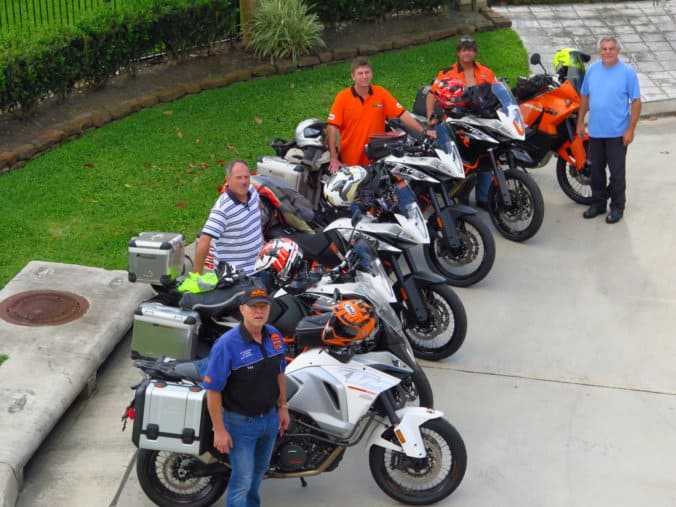 After about 50km we were still on the hi-way in traffic, and then we only got to the City Center of Houston, a very impressive city Sky-line with very modern glass and mirrored buildings. Then we stayed on the hi-way for another 50 km’s before we got to the outskirts of Houston where we stopped at a Wallmart, which is like a Hyperama on steroids, with everything inside the shop you could ever want to buy, from groceries to Hardware, clothing and furniture and decor, there is also an optometrist, Bank, Post Office and a Pharmacy inside the shop. We had to buy adapters so that we could charge our phone as our type of plugs don’t fit on the American plugs.)

Five Miles further we eventually turned onto a single-lane road for the 1st time. We drove the small little town of Bellville where we stopped for lunch at a Smoke-House, a new type of self-help “Restaurant” where a variety of meats are Smoked outside in big Smokers. I chose Brisket, Sausage and Ribs, and it was excellent. I spoke to the owner and he explained that the Brisket (and probably the other meats) are smoked for 2 Days at low heat, below 100 degrees Celsius.

We then walked across the road to the Black Smith, which also makes knifes. It turned out that this guy is famous, he was on the 1st Series of a Reality TV Program called “Forged” where a few Black Smiths are told to make a certain type of knife or sward and then judges votes one off every week until there is a winner, (he came second.) 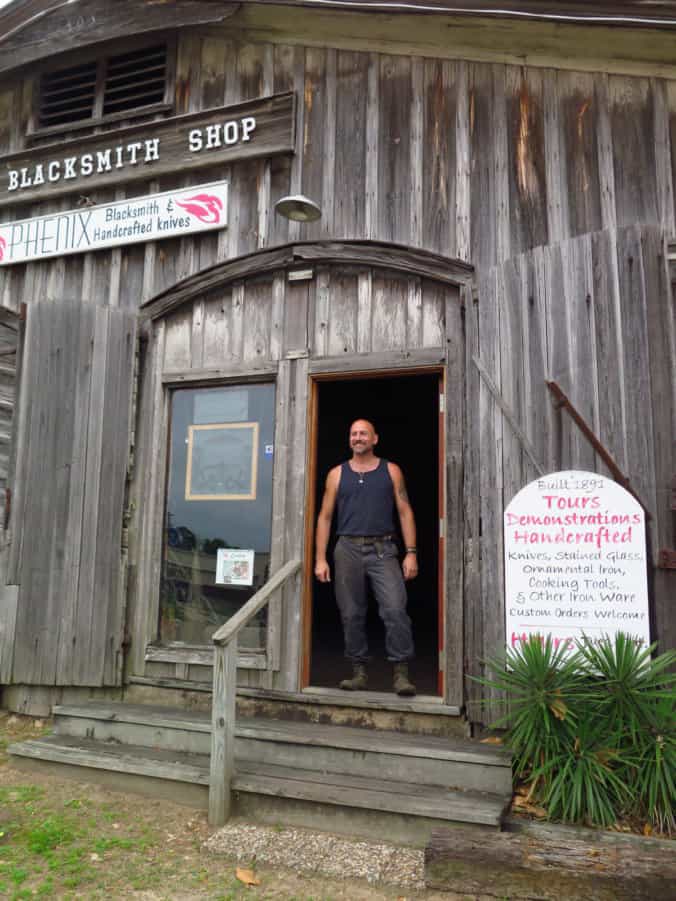 We then went to the Cowboy Supply Store next door to have a look. 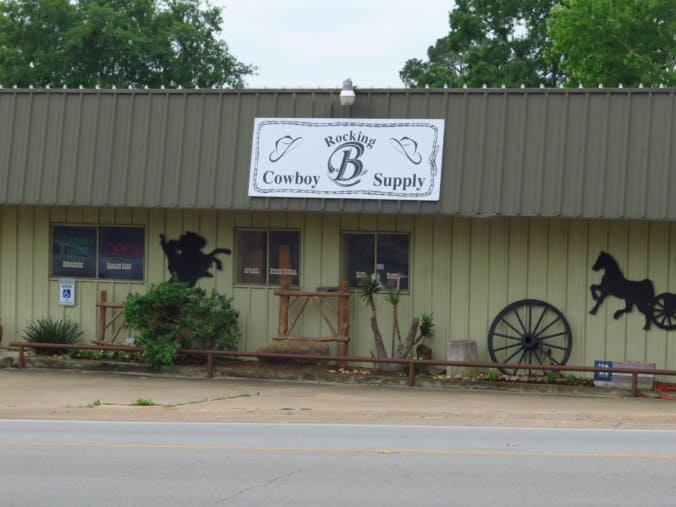 I could not believe the amount of different Boots one could buy, not only with many different colours, but also the shape differs, there were several shelves all over the shop with boots on-offer.  But to our surprise there was a Hair Dresser store inside the shop, and it was packed with about 10 girls getting their hair and nails and Make-up done for their Prom Dance at their school tonight, big excitement in Bellville today. 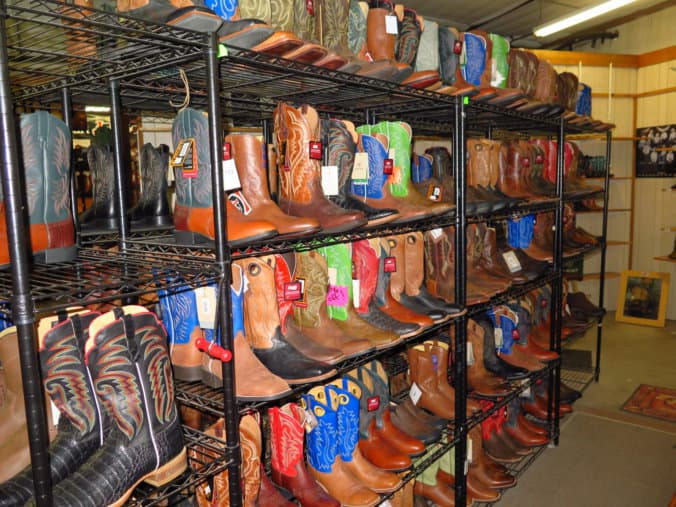 Pie looked at the Horse-Shoes available in the shop and was very impressed, something to-do with some shoes that were thicker or thinner to cater for some horses who’s hoofs were different on different legs to the other ?? 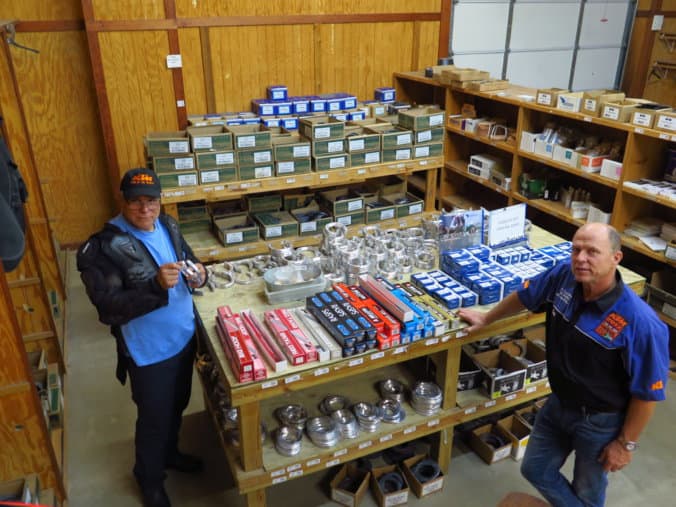 It is truly a small town in the country, the local newspaper is reporting on the Quilt Action of this evening, and outside the “Meat Market” (butchery) we spoke to a lovely mother and daughter selling home-made Brownies (cookies) to raise funds for the daughters Cheerleading Competition in Florida next month. 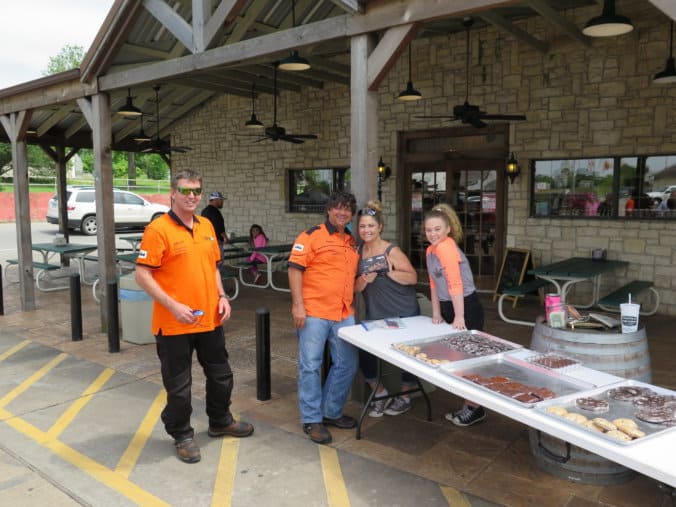 We then rode to Tex’s Farm, or Ranch as it is called here. He bought this farm who belonged to the famous Fire Fighter called Red Adare, (famous for putting out most of the oil-well fires in Kuwait after the war.) He farms with Hereford Cattle and Quarter Horses, they are a special type of Horse used in Rodeos, needs a special temperament, there are also other type of horses called “cutter” horses which are used by cowboys when herding cattle which runs into the herd and separate them, they are very nimble and can side-step around a cow which ties to move into another direction than what the Cowboy wants it to go. Then there are other type of horses which are used in a type of “Racing” at Rodeos, like the photo on the Bellville Sign Board : 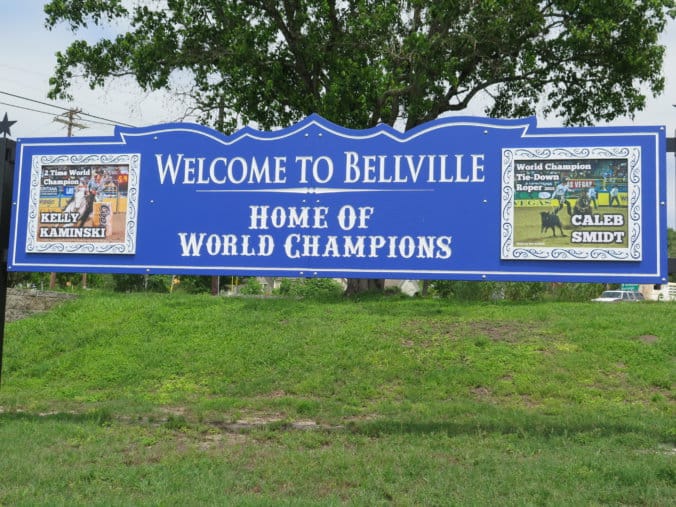 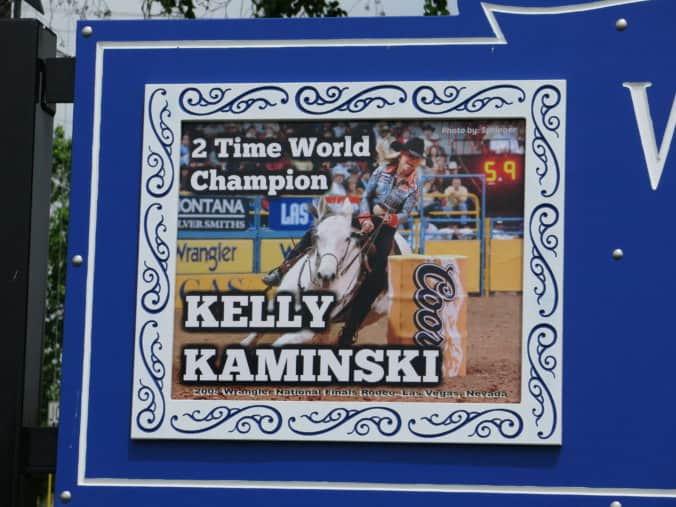 We parked the bikes and jumped into Tex’s Hummer and went to town to buy some food for our BBQ we are going to have tonight. 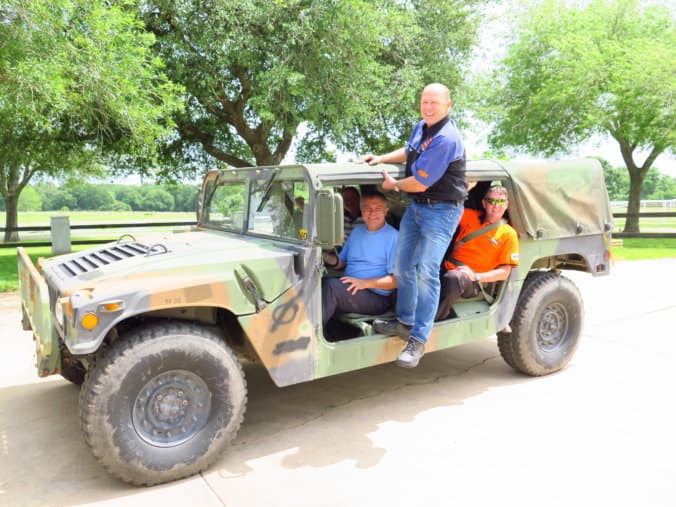 Unfortunately I just realised that there is no Wi-Fi on the Farm, so I can’t Post a lot of Photos and will have to use my Cell Phone Data to do this Blog Posting now, but I promise to send a lot of photos that I took of the Ranch House, the bar and the Party Barn the previous owner had built.

Tomorrow we will be riding to Austin where we will go to watch the Moto GP Grand Prix (motorcycle racing.) We will return to the farm to sleep here again and then on Monday we will ride back to Tex’s house outside Houston, then on Tuesday we will spend the day being tourists and probably visit NASA and see some Astronauts training, also have a look at the Space Shuttle and then go for a tour of Tex’s Family business and we will hopefully be able to meet some of his family there.

And then we will start our ride heading West towards New Orleans on Wednesday.