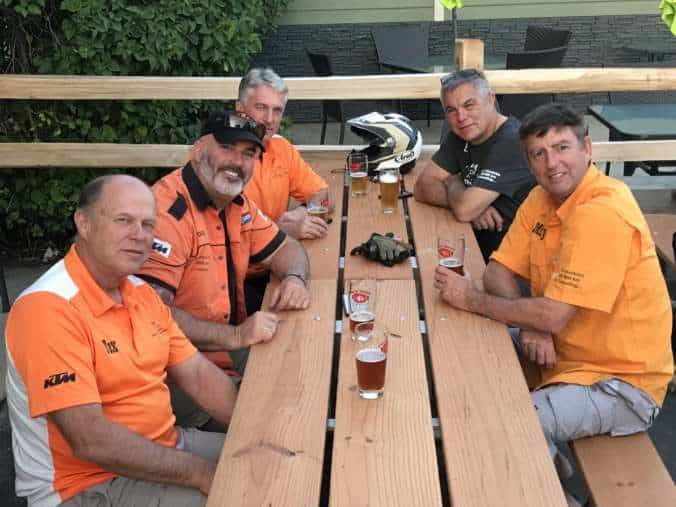 Tuesday the 6th of August, Valemount to Lynden (Washington State, just over the border) 776km, Day 264

Last night we got the bad news about Peens, but we decided to not let it break our team-spirit, the chain was problamatic since Fairbanks and Peens thought it would last, he rolled the dice and he lost, in this case, he loves rolling the dice and 9 times out of 10 he wins, so it is just bad luck in this instance as the damage caused when the chain whipped off the front sprocket was serious.

Last night before we wnet out for dinner we misbehaved and scared the little children in the pool who all got an instant lesson in Body-Surfing everytime one of us scramed throught the Super-Tube.

We rode to a little Craft Brewery and arrived just in time for last-round, at 20h00, so we had a beer there.

We spoke about when we were young and good looking and how we are now no longer young. Pie and Tex were care-free and full of dreams to chase, on this photo below which we looked at last night and decided they were doing their Starsky & Hutch ination and had the hair to prove it:

Then we went up to to the Caribu Grill, our Server was a Long Distant Snow Ski Champion with arms like legs, we behaved and tipped 20%, I even ate the wrong food as was too scared to send the food back.

Note how light it still is at 20h30 at night, it does get dark for a few hours every night and is not as bad as it was in the Arctic Circle, and still I am puzzled every night as to why the Motels choose thin White curtains, one almost want to sleep with your sunglasses on, no wonder we are so tired.

This Morning the bears were out in full force, I was riding in front when I saw a big Black Bear cross the road, I stopped at the spot where I saw her and almost had a “” (wet my pants) when I saw the bear behind the bush, she stood up and my heart skipped a beat, then she slowly walked a few steps and turned to look at me again, then Pie arrived and from where he parked he could see 2 cubs, he switched off his bike and told me to do the same, I decided to rather live to tell the tale how the bear ate him and I rode away into the morning light, so left my bike running. The cubs moved to the mother and I could see the one very clearly, but then more bikes came before I could get the camera out and the moment was over.

Kaptain Rodger also saw a bear and so did Dog.

The road was a lttle busier and wider but we still found some roads to turn into and take photos.

We were on a very sad road today, the Highway of Tears, we noticed signs of a missing girl, then signs that said it was illegal to pick-up a hitch-hiker. On the internet, we learnt that there been more than 40 (the official number is 36) girls who had gone missing on this main road, the last one being Madison Scot in 2011:

There have been no further abductions since 2011 (it started in 1969) when the community started a very active campaign to “Take Back Highway 16 and it became illegal to hitch-hike or pick up a hitch-hiker.

The 1st 300km was not too bad but the road just got busier and busier, and then with 250km left for the day we ended-up on a big Highway, so Milsy was the 1st to pull over and complain, he wanted another route off the highway and he wanted to …………..yes, swim. So I tried a setting on Suzi (my GPS) that finds “Curvy Roads,” which she did, but added another 100km to the 250km we thought we had left, small price to pay to get off the highway. We followed the 97C and later the 97D and it took us into a valey, the temperature went up to 37,5 degrees and we were cooking. We folowed the river and found a spot to swim.

Today we were out of the forest for the 1st time in weeks, we were in rural farmlands and I even learnt a new word today, “Hay Ranch” which is the name of the farm where you farm with hay, it looks like grass to me, but they the fields from the river and then cut it and bale it for the winter or for sale.

There was also a fridge (solar power) but it had no beer or cooldrinks in, only vegetables, there were also many type of Herb Plants you could buy.

We heard from Peens today, U-Haul refused to rent him a little truck to bring the bike back to Seattle, they say it is against company policy to allow bikes to be loaded in their trucks. So, Peens found someone with a work-shop in Prince George and they are machining the parts from scratch. So hopefully he will ride the bike back in due course, hopefully before his flight.

Tomorrow is the last stretch, we are in spitting distance from Seattle, less than 300km, but it is highway riding, and it is very congested coming down past Seattle to Olympia, the subburb where our storage unit and KTM is. So tonight we will speak to some locals and look at some maps and see if we can avoid going past close to Seattle and maybe come in from the East and not the North.