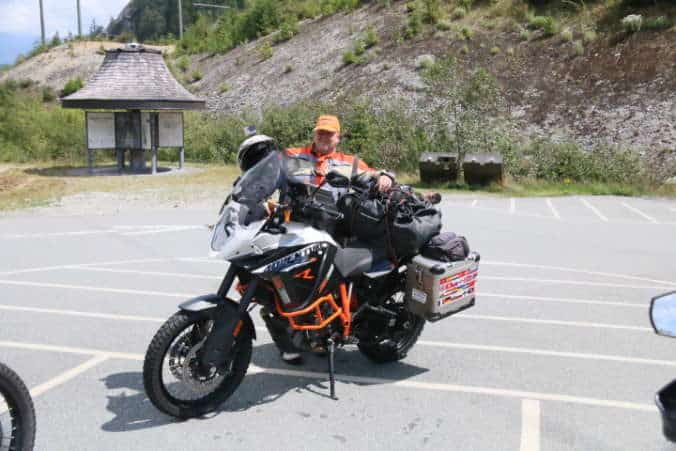 There is nothing like a 700km, 12hour day to kick your Jet-Lag in the butt !!! But I think today cured my Jetlag.

Last night while all the guys were blocking the entrance to the Day’s Inn, (it started raining and they simply moved their bikes under the Roof at Reception,) packing their bikes, I tried Suzi (my GPS) again and it would not turn on once in the Cradle, so I tried the only thing I knew in Fault Finding, and discovered that when KTM changed the battery they did not re-connect the GPS’s power supply, so it was a quick fix, and Suzi was ready for action.

Last night we all got new shirts which Tex designed and had made for us, with a much different “look” than all the shirts I had made in the past. I will post a photo of it next time.

At least we got a photo from Peens, seems he is having success with the fishing;

We thought that if we leave the hotel at 6h00 we should miss the traffic going in to Seattle, well, wrong, as we rode in heavy traffic for the 1st 120km, I thought it would get better after we rode past Seattle, but wrong again. Seattle in on the sea and on a river, so access is only from the side, and it is a very busy City.

We fought on bravely, making our way through more traffic (this is due to all the water, lakes and rivers which one has to cross by bridge, so before a bridge the traffic backed-up for kilometres, but luckily for us we saw the local biker ride in the Emergency Lane, so we had to follow their example, we also discovered the Car-Pool\Bus Lane, which once again we had to try-out.

After another half an hour it seemed to be getting better, but wrong again. I was amazed at the large amount of Boats and sail-boats for sale along the highway, and then came the RV’s for sale, hundreds of them, just like in Florida, but here there was even more. We stopped for Breakfast and I asked our Server (waitress) who explained to me that Seattle was the Gate-way to the large Out-door Playground just North (in Canada) as the area both caters for Winter sports like skiing, snow-boarding, Snow-Mobile, Ice fishing and Hunting, and in the summer the Ski-Lift takes up Mountain Bikers who ride down via the Ski Slopes. There is all the water-sports as well and fishing is very big. Canoeing and hiking is also a big attraction for all the holidaymakers who flock to all the thousands of lakes.

We then crossed into Canada, more traffic.

And then we hit Vancouver, a massive city, and like Seattle, on the ocean and some rivers and lakes. And once we were though I saw the sign Vancouver North, I almost cried, but we persisted, for 6 hours in total, and then the sun came out, the traffic disappeared and the road became a single-lane and we wound our way past the lakes, over the mountains with twisty corners through Pine Forests, beautiful!!!

We stopped at Whistler, a very famous ski resort, everything looks very Alpine-like. The Winter Olympics were held there in 2010, and that’s the year they had snow, another long story you can ask Mr. Google about. But Whistler is very Commercial and Touristy, not nice when you have to park underground just to have a coffee.

In the summer you take your bicylce up the ski-lift and ride down, the town are full of cyclists :

Here is a photo of the back of our new shirts, our bikes have our names on and the names pof the countries are very small under the bikes:

Thanks to Peens, this whole trip is now hi-jacked with finding Pie a front tyre. We stopped at the 1st village after Whistler as Mr. Google told us there was a KTM dealer in it, and there was, I almost fell on my back, this village has only a few streets, but it is on the edge of all the motorised sport. The did not have a tyre, but boy-oh-boy did they have Ski-Do’s for the winter. Just look at all snow-mobiles wrapped in plastic waiting to be sold this winter. And all the jet-skis selling now, plus plastic bikes.

We had a lovely ride the rest of the day, but it was a long day, 12 hours in total, 8 of that riding.

We stopped next to the road where people were staring at this mountain:

I zoomed in with the camera and then saw the people doing Rock-Face climbing:

Along the way we stopped and spoke to this biker-lady, she is into doing “Iron Butts” which is seeing how far you can ride in 24 hours, without sleeping, she did 22 000km in 5 weeks.

And then we arrived at The Bates Hotel:

We have now ridden through 29 countries, and I have learnt that any “Hotel” that you have to check-in in the Bar is not going to meet even the basic standard, and so far its lived up to my non-expectation. The bed is the type you have to sleep on your back because if you turn onto your stomach you will break your back, bending it in the wrong direction. There is several Wi-Fi options to choose, as long as you don’t expect them to give you Internet access they are nice and strong in signal, but that’s all.

Tomorrow we have another Big-Day and it is Stands-up again at 6h00.

May the Force Be With YouFleisch