The ride to  “The Circuit of the Americas” where the Motorbike Grand Prix was taking place near Austin was just more than 100 Miles from Tex’s Ranch, where there are no Quarter Horses, (not even half a horse) as I discovered after I sent out yesterdays Blog, the previous owner had the horses and that was why it was still written on the name-board of the Farms sign at the entrance to the Ranch. We planned to leave only at 8h00, but by 7h15 we were all sitting on the bikes wanting to leave and get more riding-time on the new bikes. Not all of us were sitting on the bikes, Milsy was already practicing his Wheelies 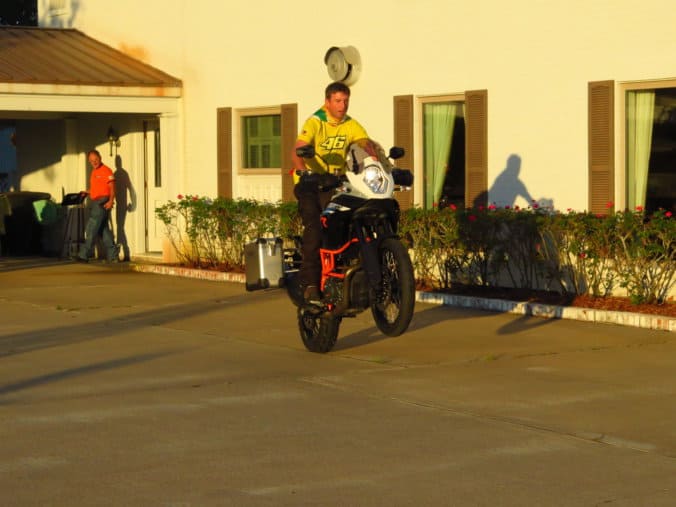 Along the way we stopped at The Trump Dinner, named that long before Donald Trump was voted in, and had breakfast between all the Trump photos and memorabilia and there was plenty of Trump Apparel on sale, everything from T-Shirts to mugs and branded hats, even a sign which reads “Put Hillary in Jail” so I doubt any Democrat will be eating in this Dinner, but apparently there are not too many Democrats this far South and this is Trump Country. I ordered an omelette wit Hash-Brown (not the little potato cake we know from Wimpy, but plenty of boiled potato grated into a pan, it looked like straw on the plate,) but was unable to finish it, the portions are huge.

I was very surprised with this part of Texas, the “Hilly” part they tell me, it lookes completely different to what I was expecting, I thought it was just going to be like the Karoo, dry and flat with plenty of oil wells, but it was not, it looked like the Midlands, with the road winding through the hills and the green farm lands with all the cows standing in short green grass next to little lakes and the farm houses built close to the white picket fences.

The little town (actually more like a village) of Fayette blew me away, all the houses are neat wooden homes with a front Porch wrapped around most of the house, situated under hundreds of Oak trees all over the Village.

My next surprise was how well the entire Grand Prix was organized, no traffic-jams getting in or out, these people know how to handle large crowds, and everything was done to military precision. There was also almost no ques at any of the Vendors, and there were shuttles bringing the people in from the parking lots, and we could simply walk into the race-track and our tickets were scanned and there were no lines to get in, which was the best news ever as I was dreading the hazzle I thought there would be to get in. Here are some Photos 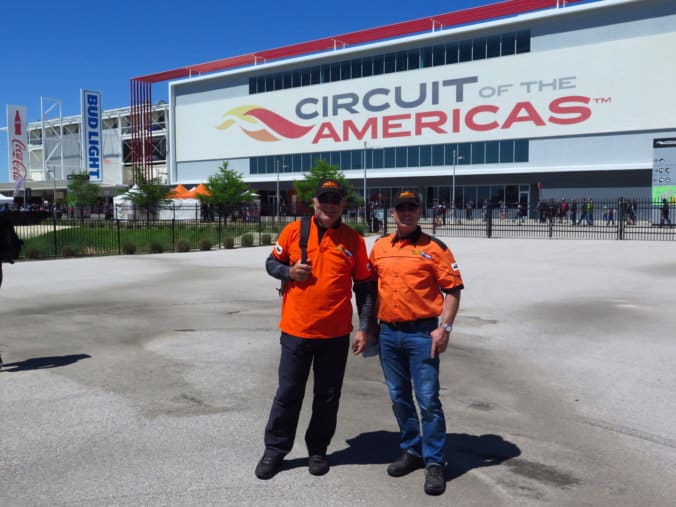 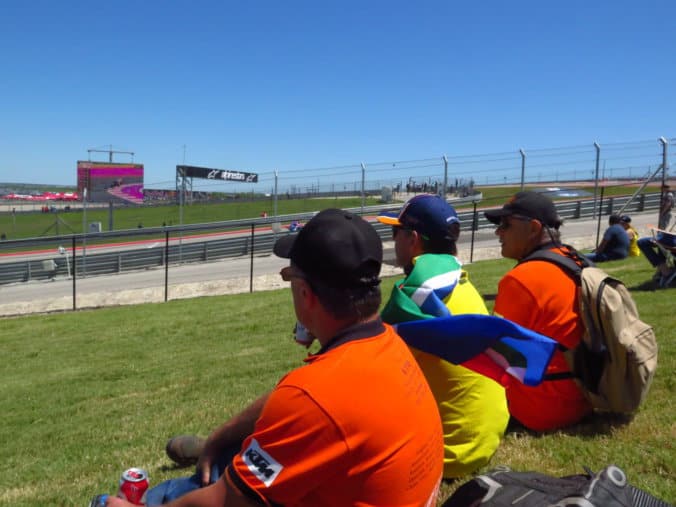 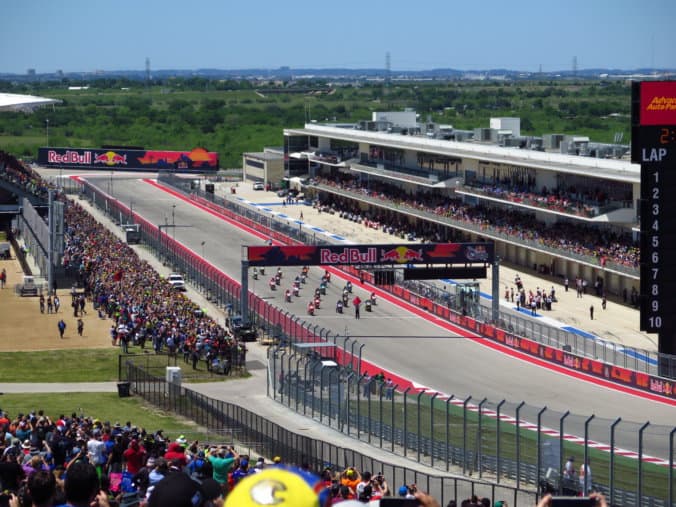 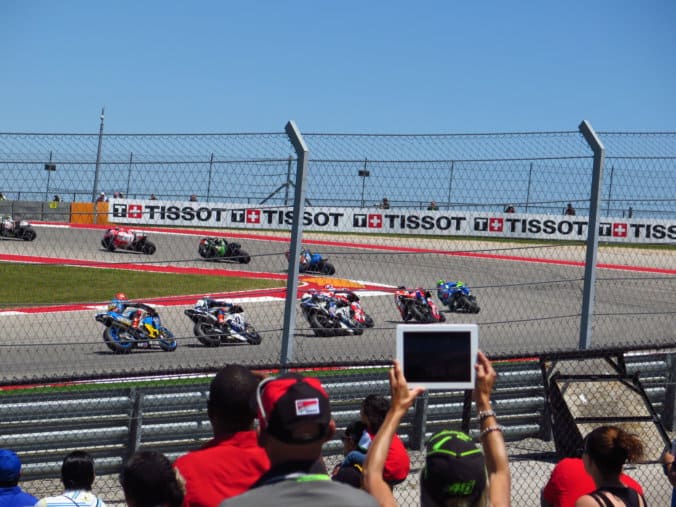 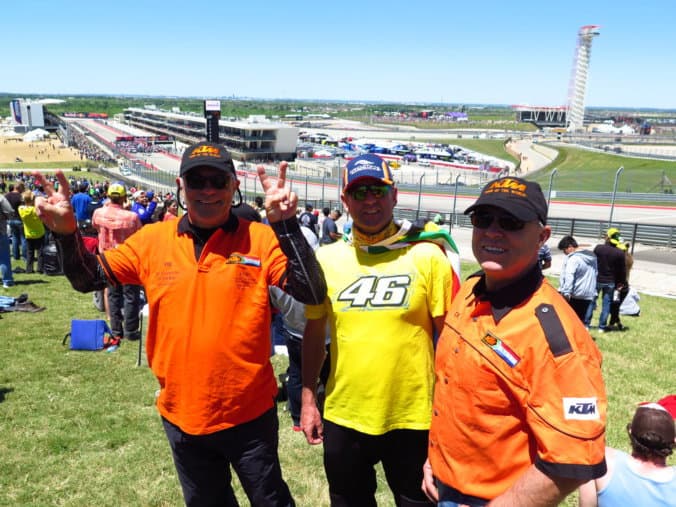 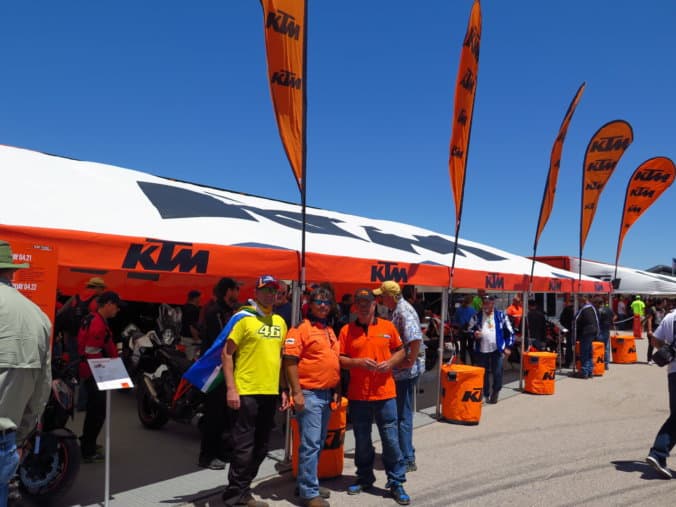 But everything is over very quickly, the main race is only 45 minutes, and my favorite Rossi came 2nd, I would have loved to see him win, but this track favored the  Honda’s.

We took a different road back, meandering through small towns like La Grange (from ZZ Top song) and the highlight was a place called Round Top, a arty-type village which is big-on art, but mostly famous for Antiques. We arrived at 17h00 wanting to have a coffee, but the then discovered everything closes at 15h00 on a Sunday, but the then the  we experienced 1st-hand about the Texas-Generosity we have heard about, the lady from the cafe insisted on giving us some Pie, we tried our best to pay for it but she would not let us. She gave is two pies, a Pecan-nut  Pie and another local Texas type Pie. We ate it on the street. 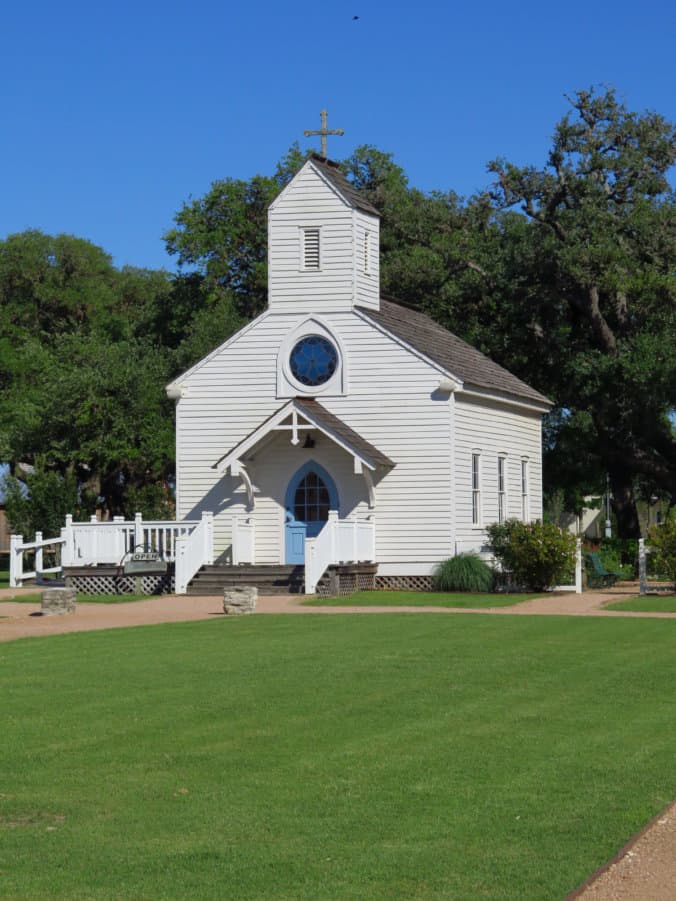 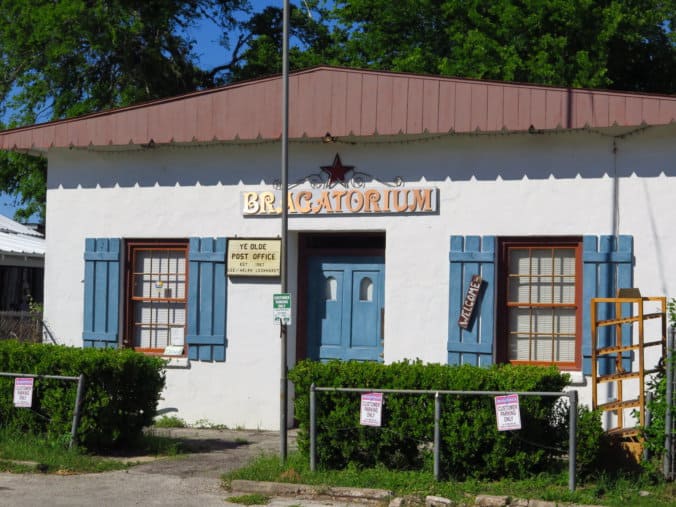 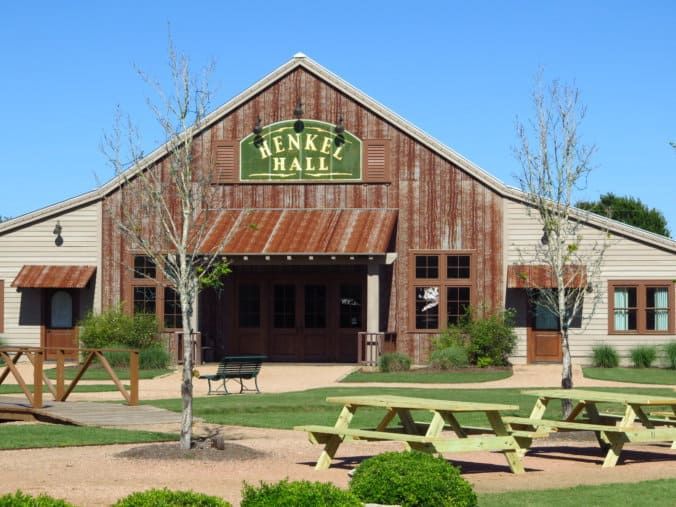 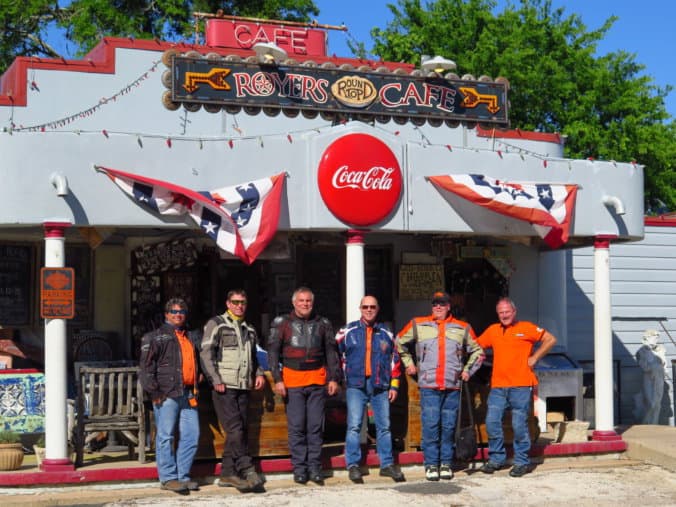 Then we rode to one of Tex’s neighbor’s, he has a Micro Brewery, and we were shown around and sampled the 4 types of beer he makes. 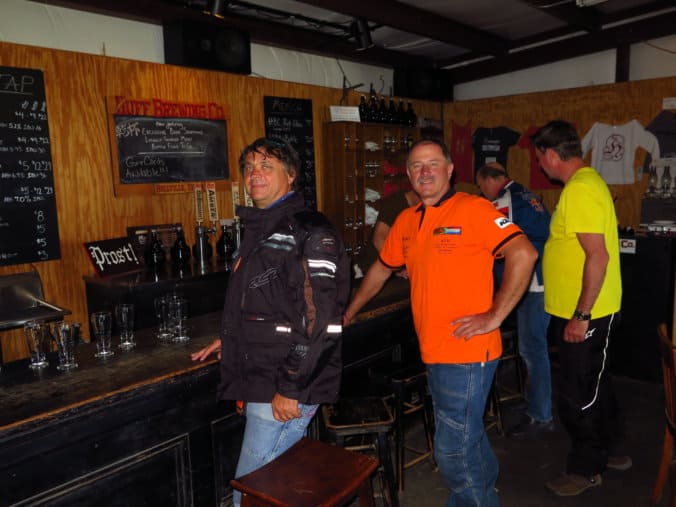 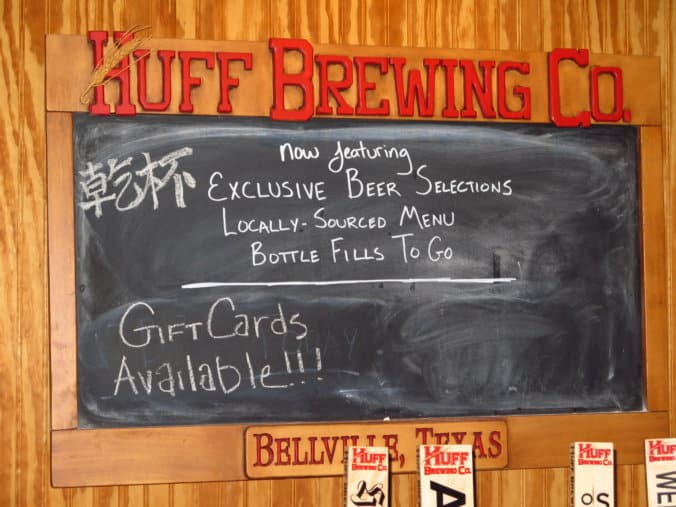 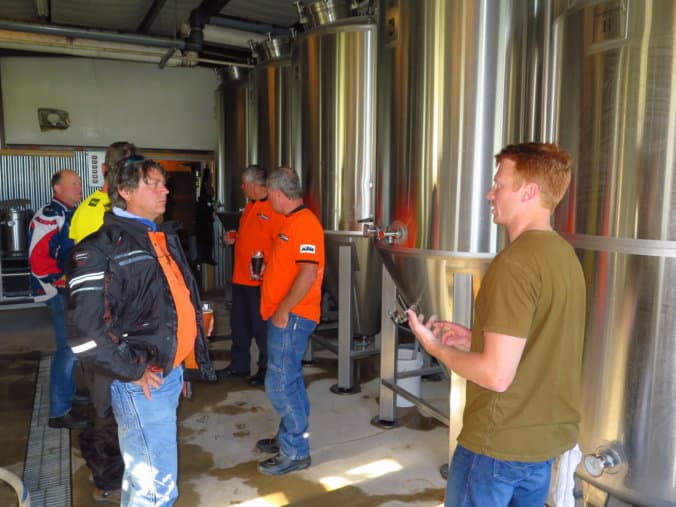 Then it was back to the Ranch where Tex cooked us the best Texan Rib-Eye Steaks I have ever had.

The new bikes are UN-believable !!!!! KTM has produced a completely different bike to the one they produced 5 years ago. The motor is only 200cc bigger, but it produces 50% more Horse Power, the gearbox is as smooth as silk (the 990 was “clangy”) where the old bike did not even have a Fuel gauge, this one has an on-board computed which can give you all the info you could ever wish for. It has traction-control and several different ABS Options and Heated Grips is standard.  We took the R version which is more off-road friendly compared to the standard model and I cant wait for trying Dad-Ass out on a loooooong gravel road real soon.

BUT, yes there is a big BUT, actually a big and a small Butt. Due to just one exhaust instead of two, it results in one pannier being made smaller to accommodate the exhaust pipe, and this bothers me as it looks funny.  And has far less space for luggage. 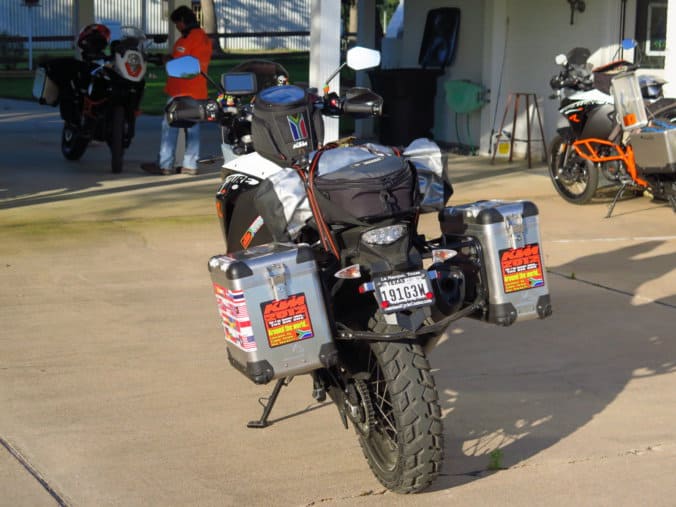 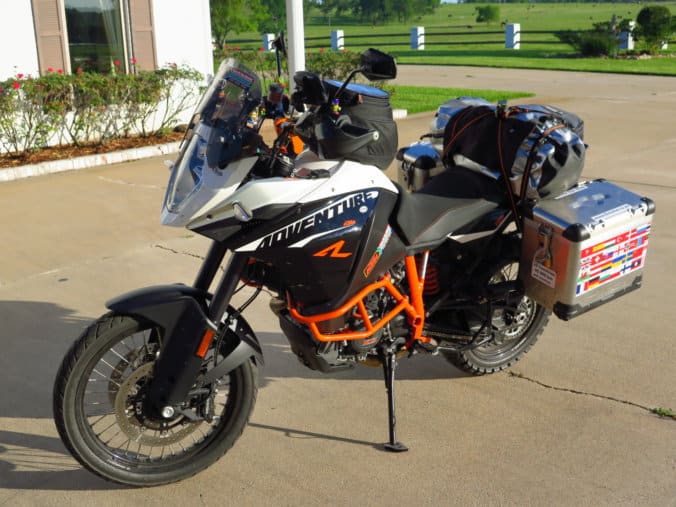 So the only way I can fit all my stuff is to strap a Ball-Sak onto the back of the bike, not ideal.

Day 191 Monday 24th April : From the Ranch to the House to the Factory