Rocky milked his birthday yesterday, my present to him was that I Waxed his bike’s Chain, he was also Chauffeur-Driven to the restaurant last night by Pie in Amey’s sports-car, he got to sleep in the biggest bed and even asked Peens to Butter his Mielie (Corn on the cob) and cut his Po-Boy, it is actually Poor Boy but they spell it as it is pronounced and is a type of sandwich, (Rocky and I shared, one had fried Shrimp on and the other fried Oysters, they Crumb it before frying it, or as they say here, it is “breaded”) last night during dinner, so he had a very good birthday in spite of being away from his family. 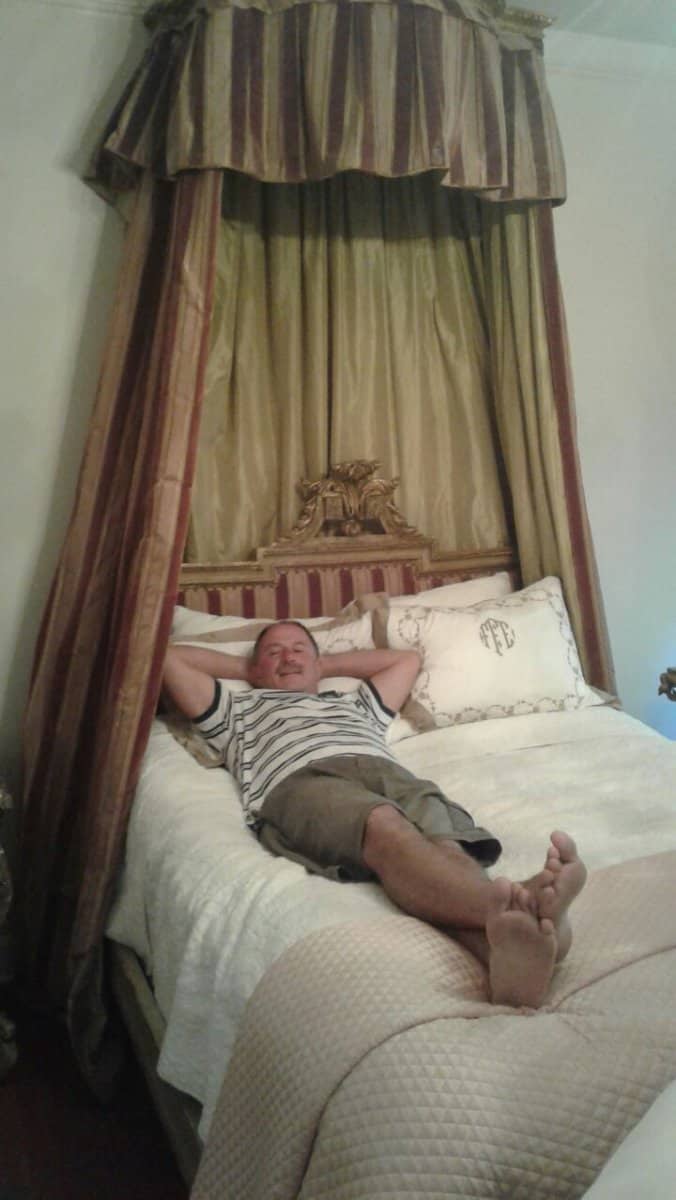 Photo of car to follow when my Riding-Mates forward me the photo as promised. 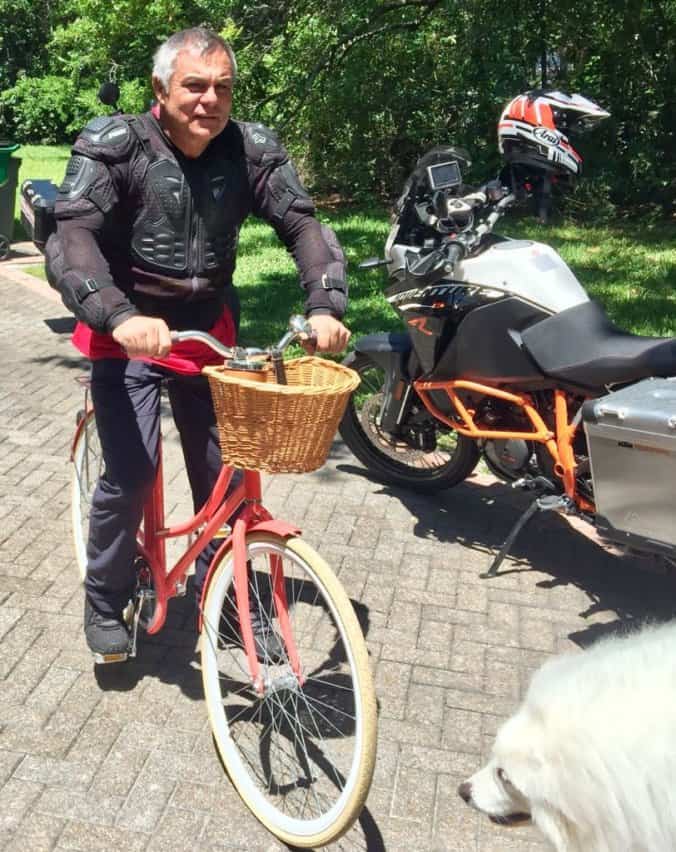 After dinner we went to listen to some music and get a feel for the vibe New Orleans is so famous for, but I forgot my Mmeory Card in my computer and did not put it back in the camera after downloading the photos for yesterday’s blog, so no photos to show you, but there are bands and music all over and it has a carnival type of atmosphere even now, I would hate to be there for the Mardi Gras, (sign I am now really getting old.)

When I was little there was a song my parents used to listen to on the radio, it went something like “Jumbalay Mea Mia Alabama, ….. something ……something sun of a gun……something….on the bayou.

Well, Bayou’s are big here, it is what a stretch of water is called, like a canal, not a river as those have names, but there is just so much water in Louisiana and Alabama it is mind-blowing, there are just swamps and rivers and lakes and bayou’s and more swamps, and I have never seen so many boats standing all over, there are boats in front of every house you travel past, next to every Trailer (mobile homes that are parked in RV Parks, or we would call it Caravan Park’s) and then there are 100’s of boats for sale next to the road at dealerships.

This morning we left early, 6h30. Peens and the Harley guys were there on time as they did not sleep at the house. 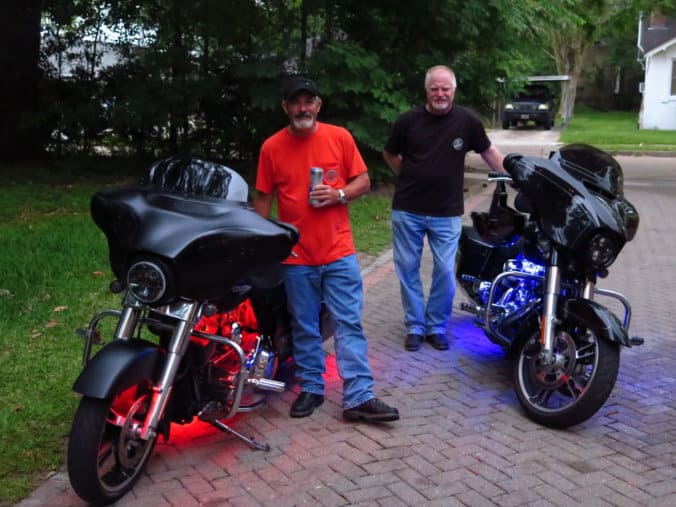 Marty and Allen exposed us to how different the Harley Guys ride, they travel with a cooler-box in one pannier, stocked with ice and a selection of drinks, they stop every hour for one drink, (not on this trip but normally they tell me.) They also have far more signs they use, (us Guys from “KTM Tour of the World” has one, for Coffee, apart from the normal signs to go straight or turn left ect.) If you put your hand on your helmet and point one finger upwards it means you have to stop to do a Nr. 1 at the next toilet, two fingers means you need to stop for a Nr. Two, and when you put three fingers standing up from your helmet it means that it is now too late to stop for a toilet and you want to stop at the Laundry to wash your riding pants.

There was some swapping around of bikes. 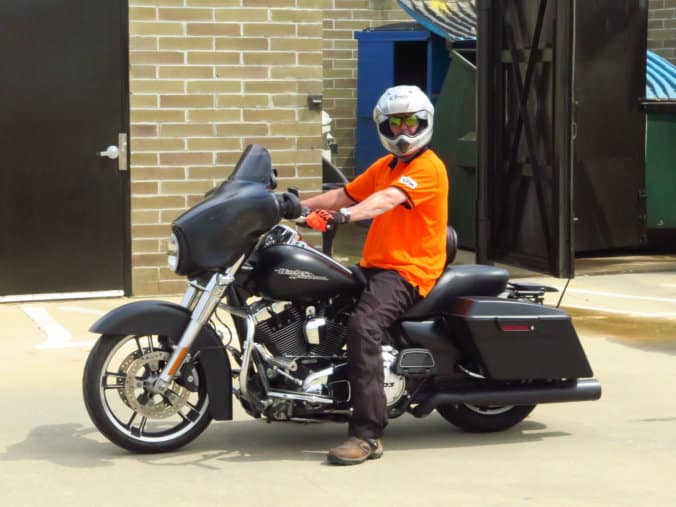 Marty tried the KTM 1190, (but he knew it as he was one of the 4 guys that went with Tex to ride the 4 new bikes down from Oklahoma. 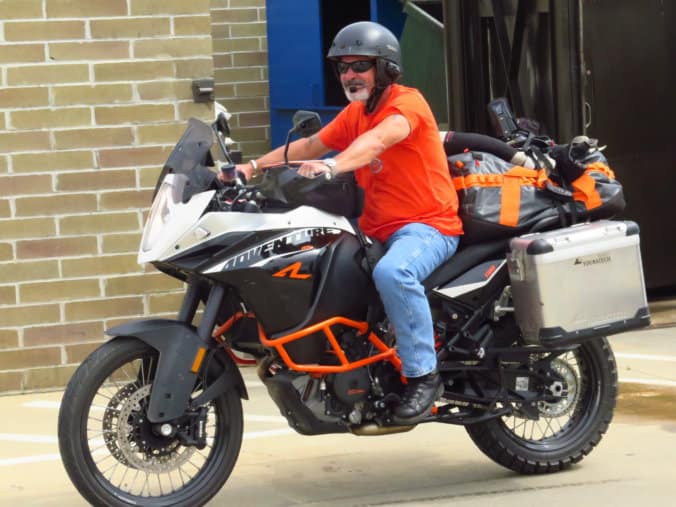 The Mullet Tossing Contest is an annual beach party that happens in Flora-Bama and you throw a Mullet from one state to the next state, and is one of the biggest beach parties on the Gulf Coast. Just like the school leavers go on a big big party during Spring Break, this is similar, but for an older group, (average age about 40) and I hate to admit it but out of our group there were even some guys who paid less to enter as they qualified for Pensioners Discount, (from 55 upwards.)

Today the wind was blowing East to West, so we started in Florida. You choose yourself a Mullet from the Ice Box. 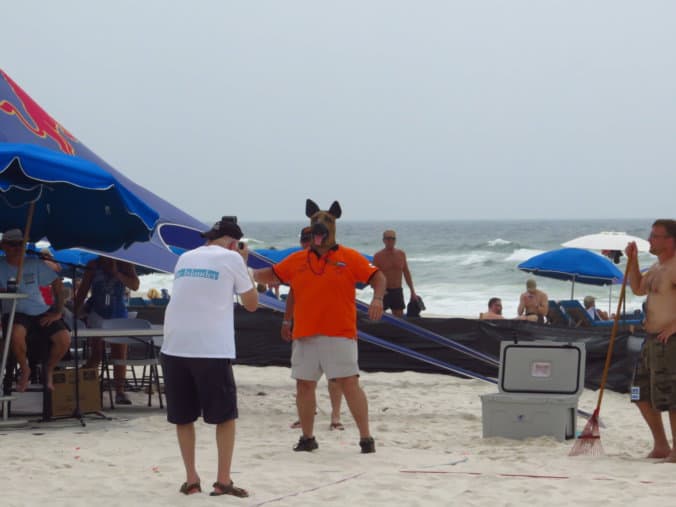 And then throw it towards Alabama. (Yes, I got the states wrong yesterday on the Blog, I forgot that there was another state we were going to cross through today, Mississippi, and then it gets measured. 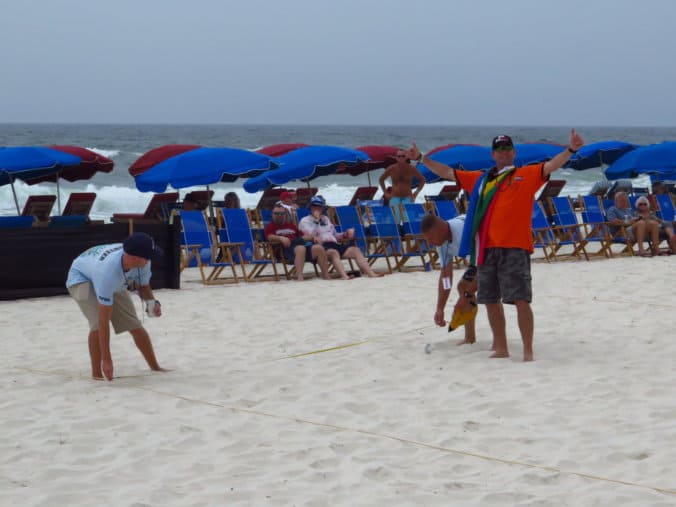 Milsy was the winner out of our group, h threw it 85 feet, (about 30 meters,) but he is the youngster and he did cheat, he broke the fish’s back, folded it in half, and then stuck his hand in the sand to overcome the slippyness (new word I just made, for when something is slimy and slips easy.) I threw mine out of the park, but it was also out of bounds, and I was the only person out of our group that actually managed to hit someone, a very surprised spectator, (I did walk over and apologized after my throw.)

Here is more info should you want to have a look :

Today was like a Rehearsal for tomorrow, today there were 10 000 people and tomorrow they are expecting 100 000 people. (Some of the money goes to charity.) But apart from a beach full of party-goers and many bars and restaurants behind the 1st dune, there was police everywhere, some on bicycles, others standing under umbrellas, hundreds of other security, all connected with radios etc. as I suspect the party will get very loud and wild once the sun sets. Here are some photos. 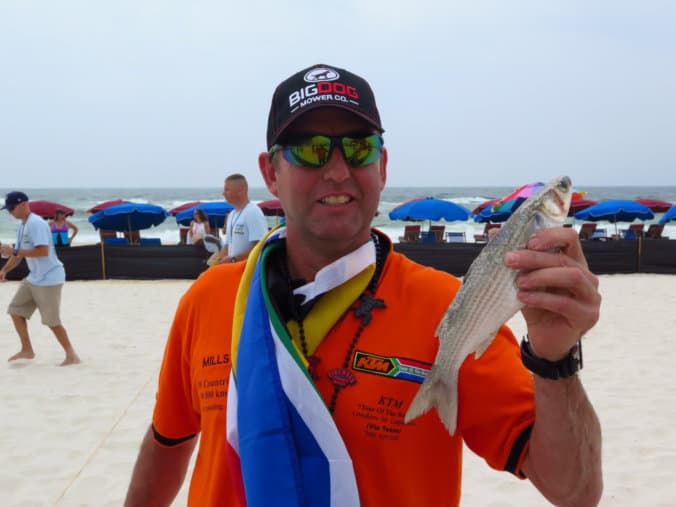 The Miss Mulllet Tosser of Last year throwing her fish. 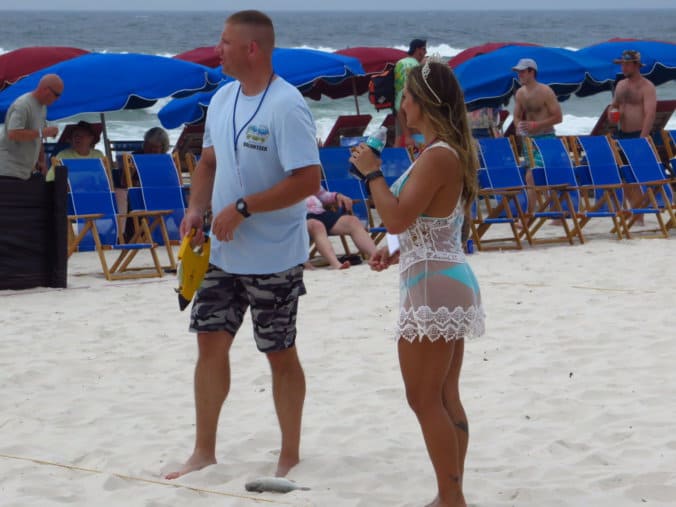 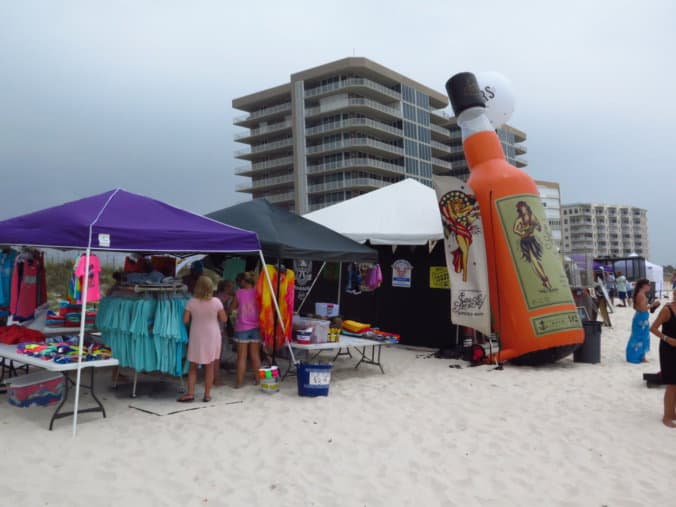 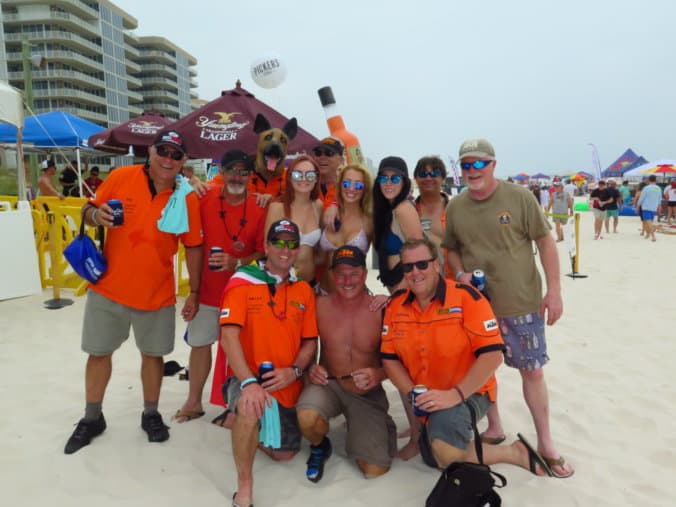 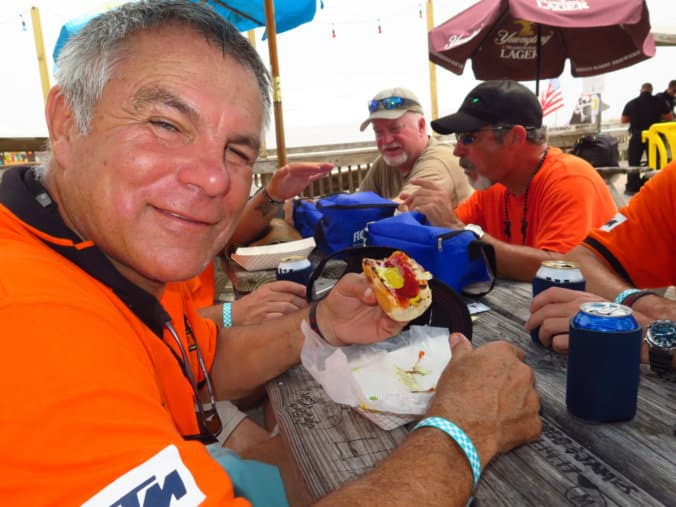 There are several Band-Stands with bands playing non-stop. 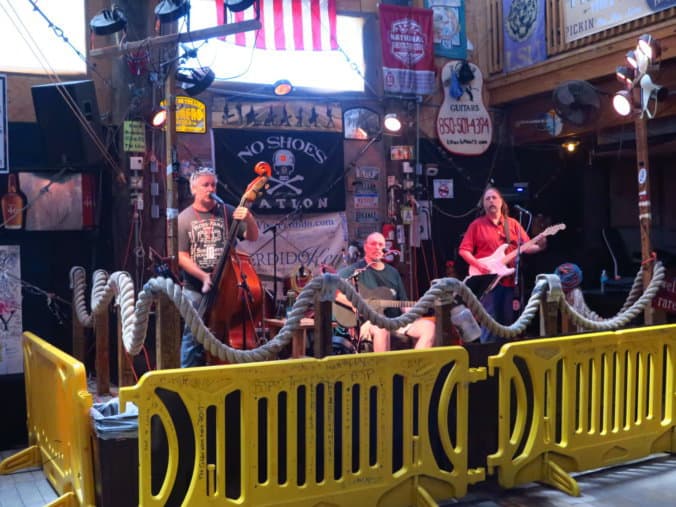 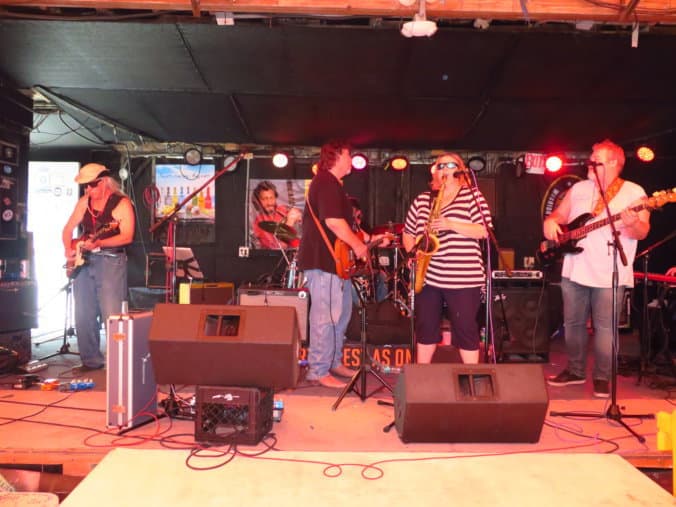 There was even a Non-Fish-Type Mullet: 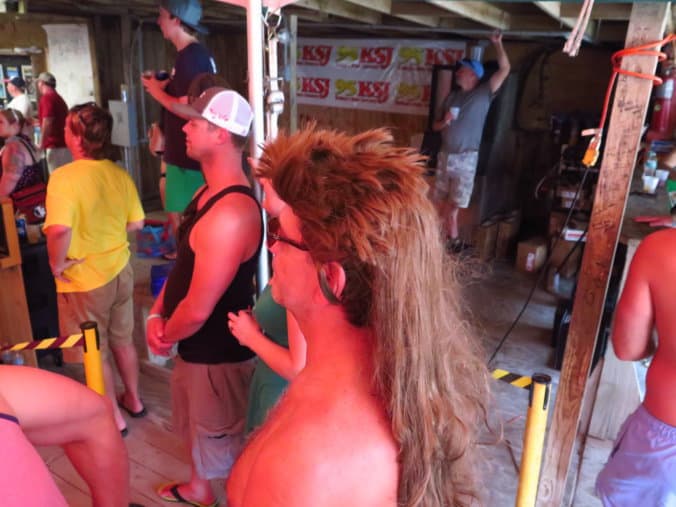 And a Miss Bikini 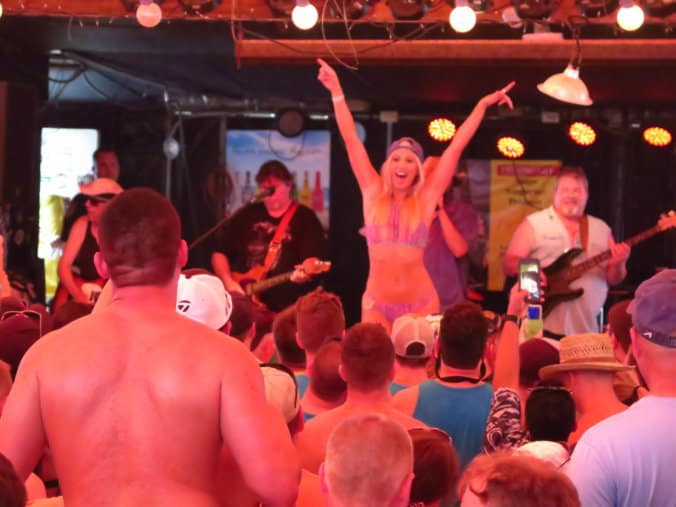 Tex and Milsy noticed the evidence of previous years parties (must have been before the police got involved, or it might just be a good promotional stunt : (see 2nd photo) 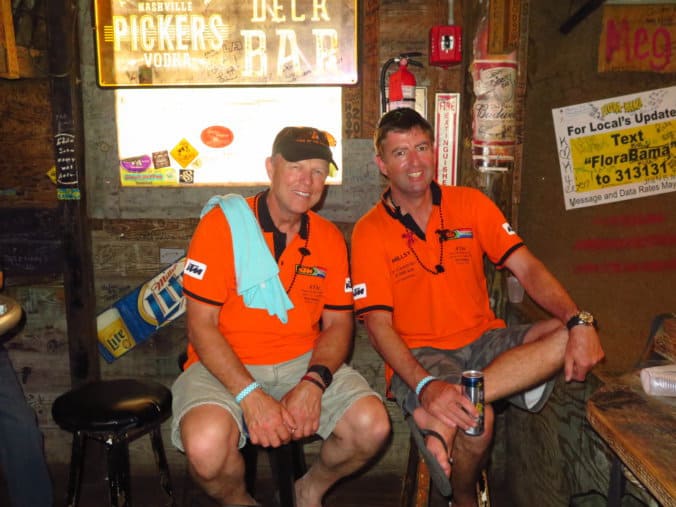 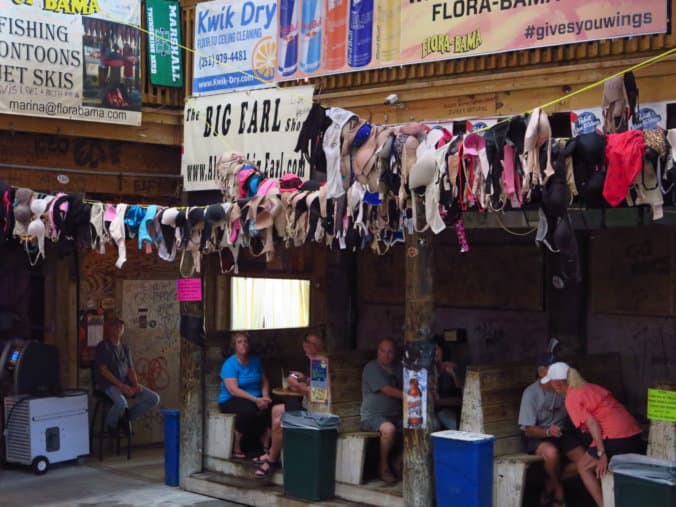 We could only get accommodation 48km from the party, so we left early and rode to Motel Nr2 Two, which I must say is a step-up from the previous one, this one even has breakfast tomorrow morning.

Tomorrow we are still heading East.