Last night we went down to the river (a smaller river that flows into the Mekong.) The locals have build little restaurants along its banks selling food to the tourists with bread-rolls (baguettes) and Hamburgers and French Fries (another sign the place is on the brink of becoming a tourist trap) on the menu. But true to form we found the little bridge they had built with bamboo going across. 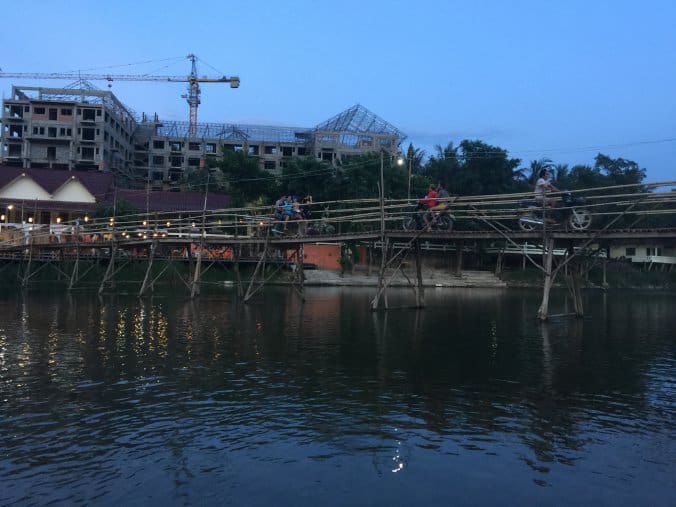 They had built little floating rafts with tables where one can sit and watch the sun set. You put your feet into the water and the fish eat-off the dead skin (for free !!) They serve you drinks from their cooler-box and you can even order basic foods from them. 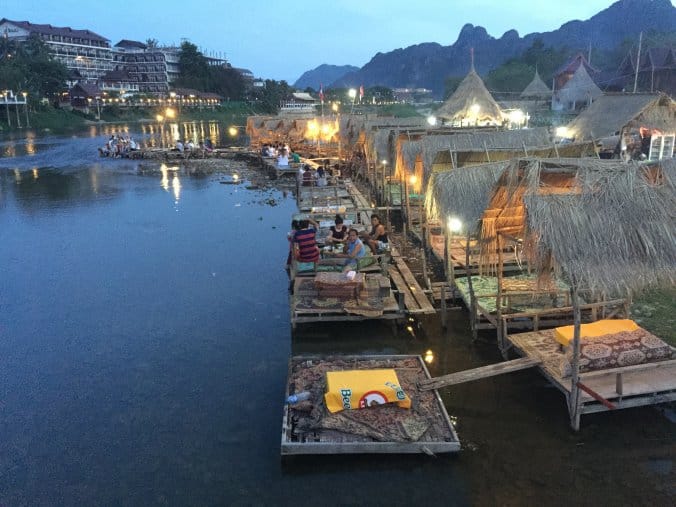 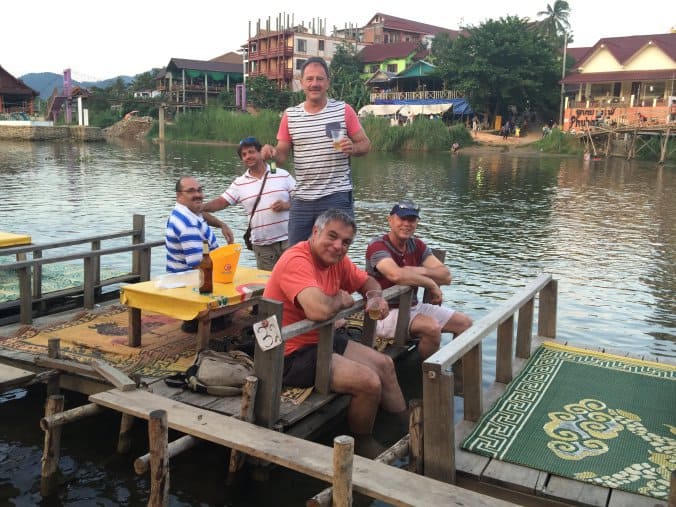 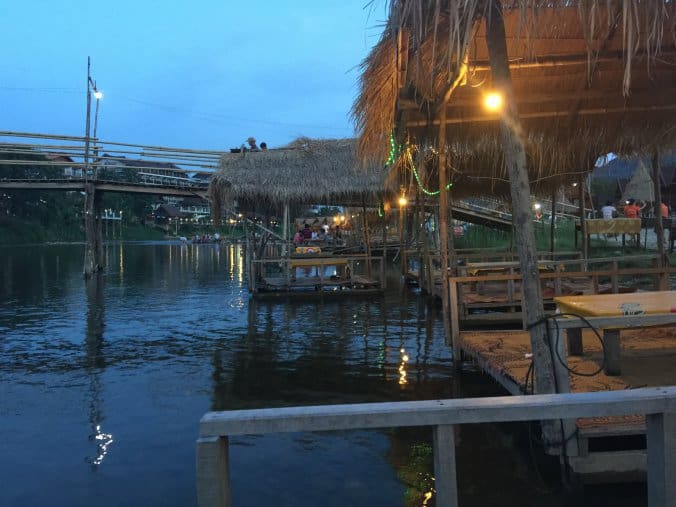 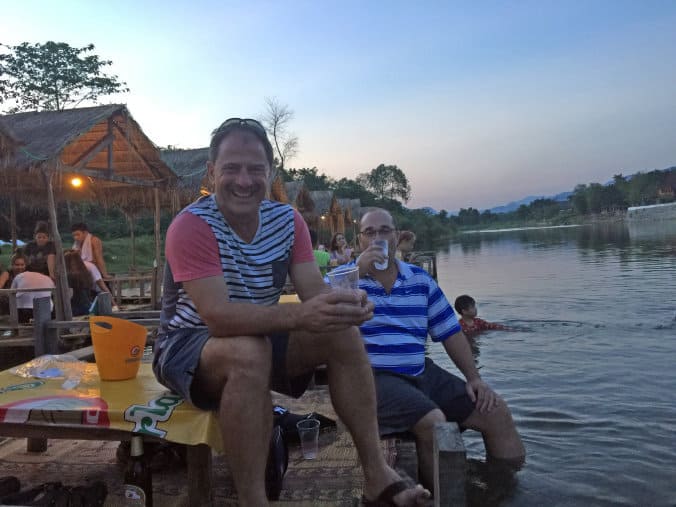 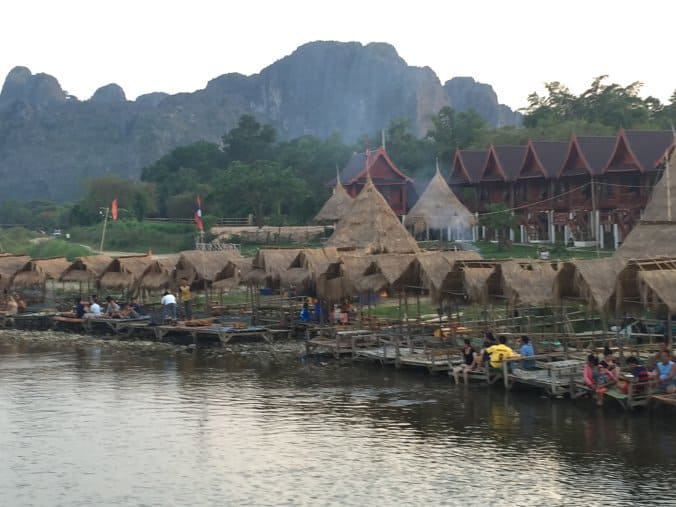 We left early knowing we had to to do a boarder crossing into Thailand, but it was another very hot day and I discovered that Rocky could take off his riding-gear before I could even get my gloves and helmet off. (Good thing I lost my gloves at the border today, less to take off, so I guess I will have to ride with my Winter gloves until I can find a Bike-Shop that sells gloves.) 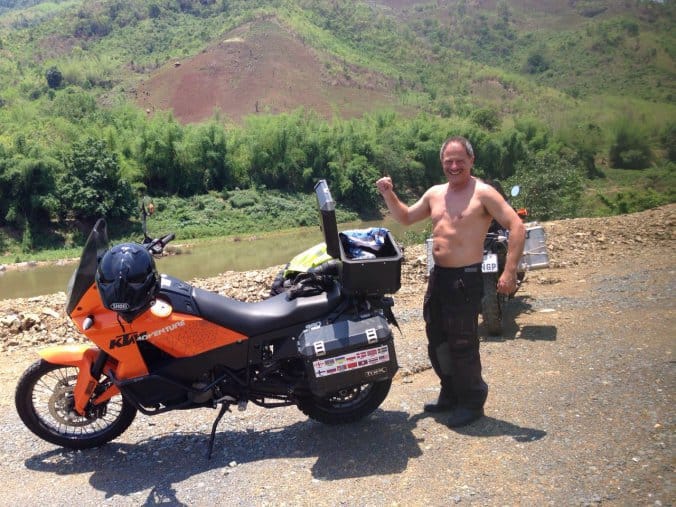 Our road started to improve today (and so did our toilets, we now almost have a complete and function Western Toilet. 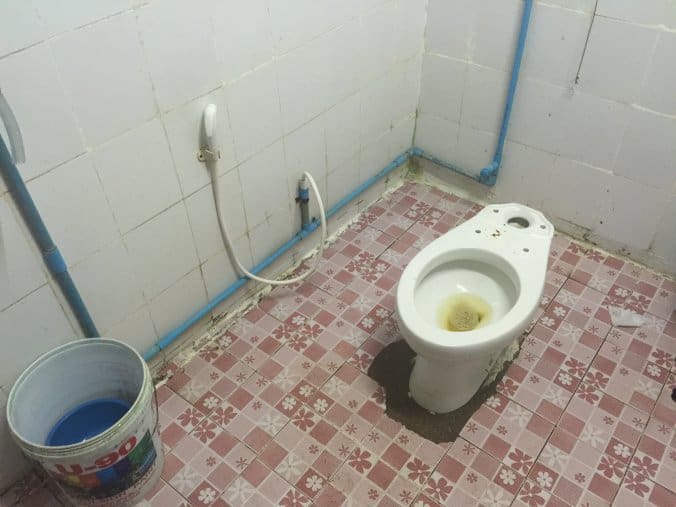 We left at 8h00 after fighting for a plate of noodles and fried rice during breakfast as the tour-bus with Chinese Tourist also wanted to leave at 8h00, so pushing and shoving and cutting the line was in the order of the day, and this continued at the border, but not before the bikes had a chance to reach top-gear 6th gear) for the 1st time since we entered Laos. Yesterday our moving average speed (in the rain on the mountain pass was only 40km per hour, the day before was only 57km per hour, so when we hit a straight road today I was actually a little nervous as I had become accustomed to lean left and then immediately start leaning right for the next turn, but today I could actually go over a 100km per hour.

Most of the day we rode through one town after the other, not any photo opportunities, no playing tourist today, today was a travel day and we sweated. In the one town there were some roadworks and only after the bikes temperature gauges reached the maximum and started flashing did we start some pavement-hopping which saw scooters scatter in all directions.

But it was with a sad-heart that I realized the minute we crossed into Thailand that the “adventure next to the main road” part of this bike trip is over, (and will probably be for a long time.) As we crossed we were directed over to the Left hand side of the road, (we have been riding on the right-hand side since France, in 2012,) all of a sudden there were road-signs, the tar was no longer full of potholes and the toilets were clean and Western, no more will we be able to find the adventure next to the only road, from now onward we will have to be riding far of the main road to find some adventure, it has all of a sudden become very civilized. Today was the 1st border crossing since Romania where our bikes and back-up vehicle was not searched when crossing over a border. We were not sent from pillar to post filling in endless forms, all of a sudden it is starting to feel like home, a little too easy.