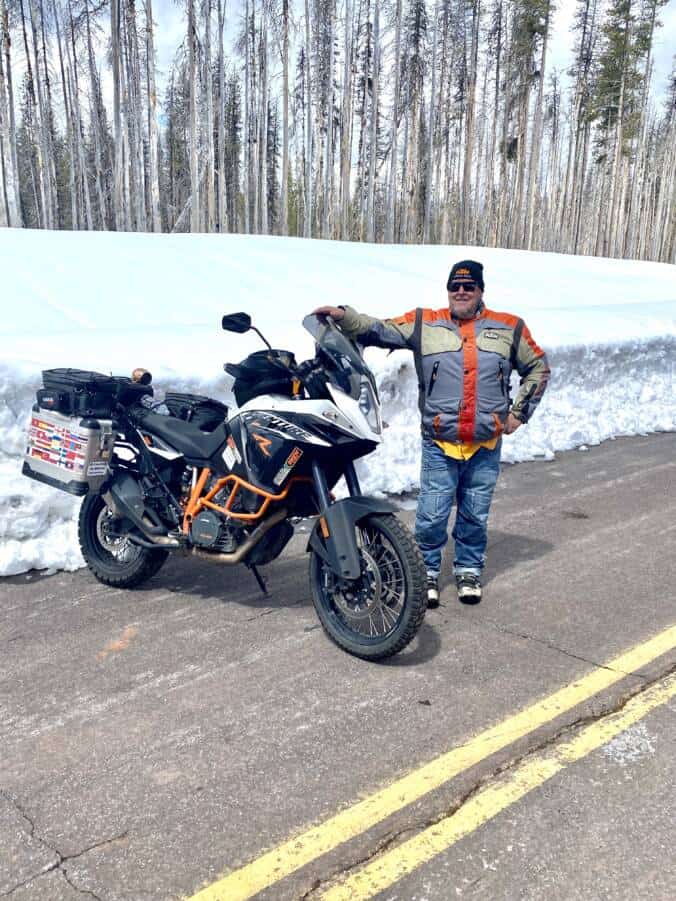 Last night I saw a game being played in the pub where we stayed, its called “Shuffle Board.” Its similar to Bowls but each player has 4 discs that he slides down a table that has been dusted with silicon and “Walnut-dust” and the idea is to get the disc as close to the edge on the other side, the closer to the edge the more it counts, your opponent can also crash into you sending you off the edge: 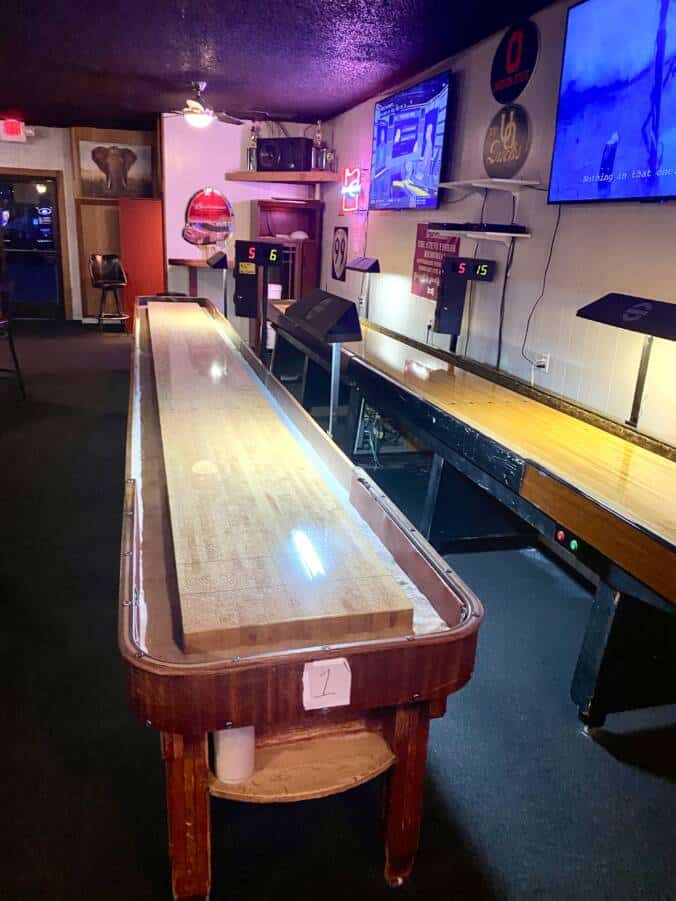 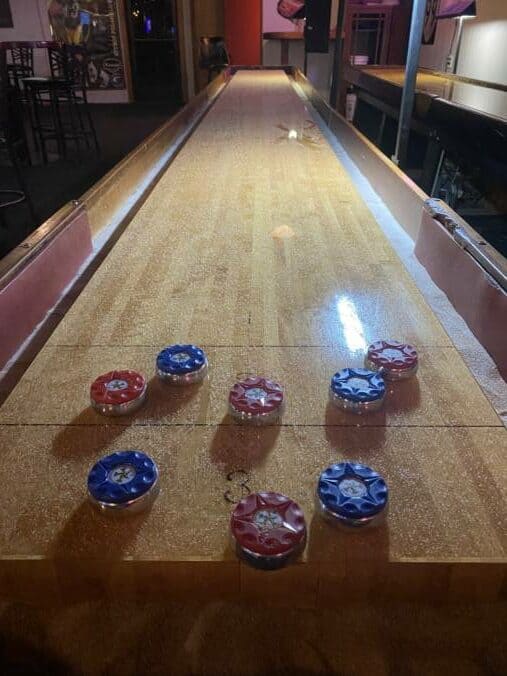 The two “Touristy” things we were going to do today were epic fails, first we ran out of road on the way to Crater Lake, and then the view of the highest Peak in California (yes we crossed over into the big C,)  was covered in clouds and it looked like a little hill with snow on and low clouds. But luckily the day was saved by the road. We had a long day and the 1st 200km were on a little twisty road running next to a river, the KTM Train “snaked” along with the river. As it is still early Spring, most trees were just starting to get tiny leaves and we had a display of “50 Shades of Green.” 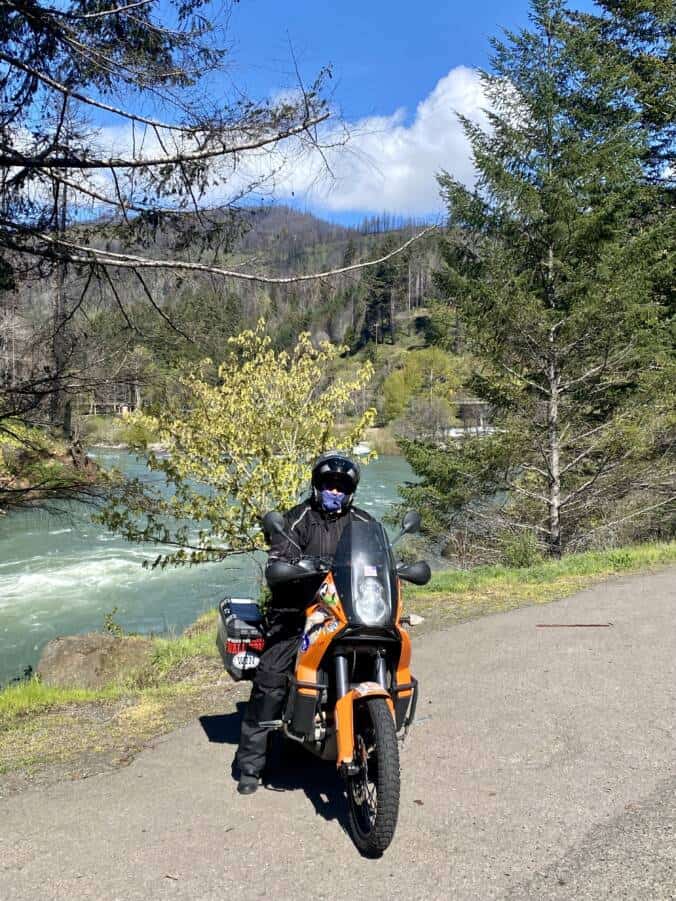 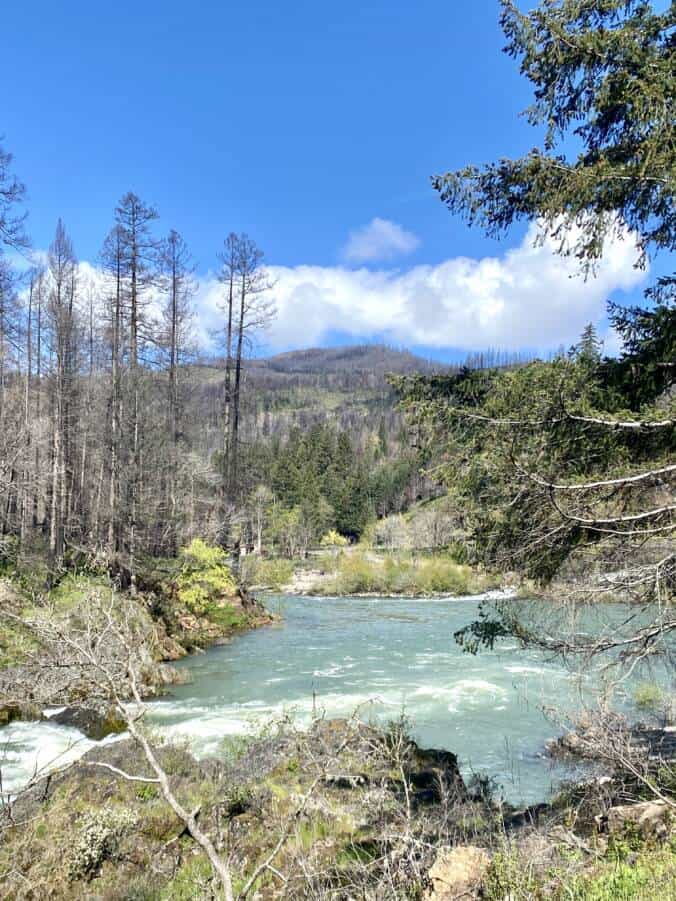 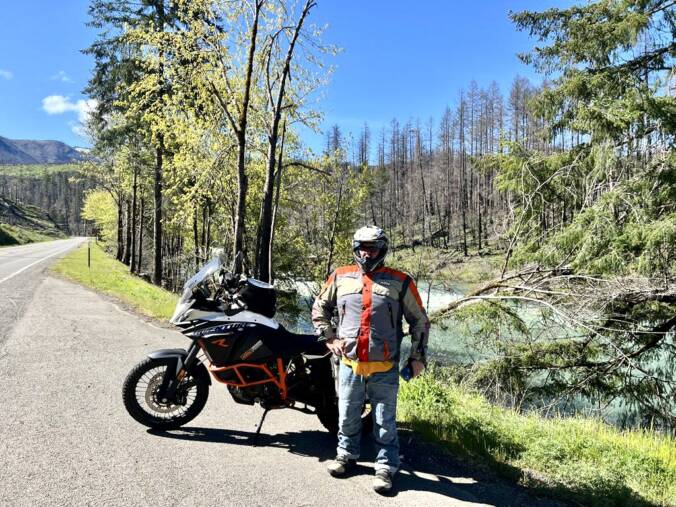 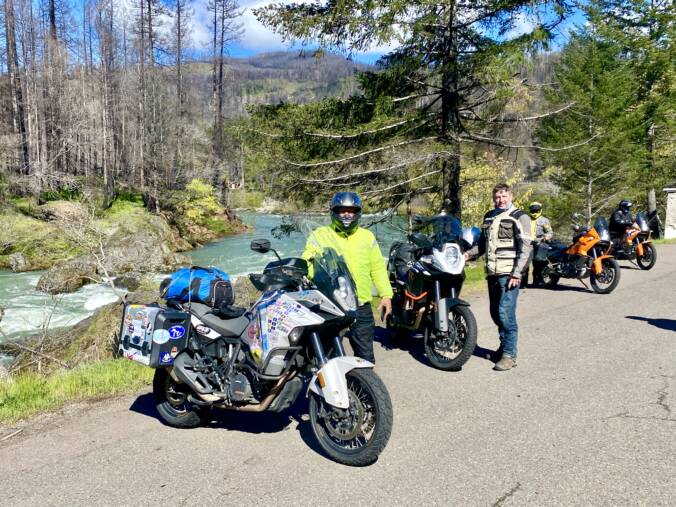 But then we broke away from the river and started to climb, over the snow-line and then it was time to play in the snow. Tip: Don’t throw your friends with Snow Balls, your hands will take hours to recover to normal temperature, best you wear gloves before throwing them in the face. 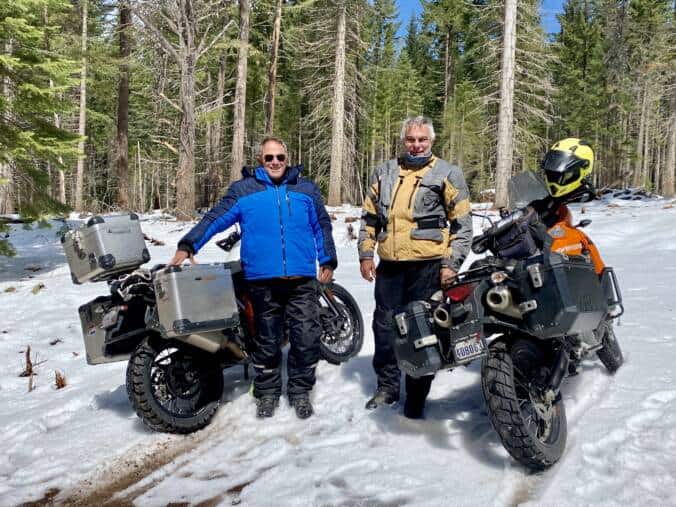 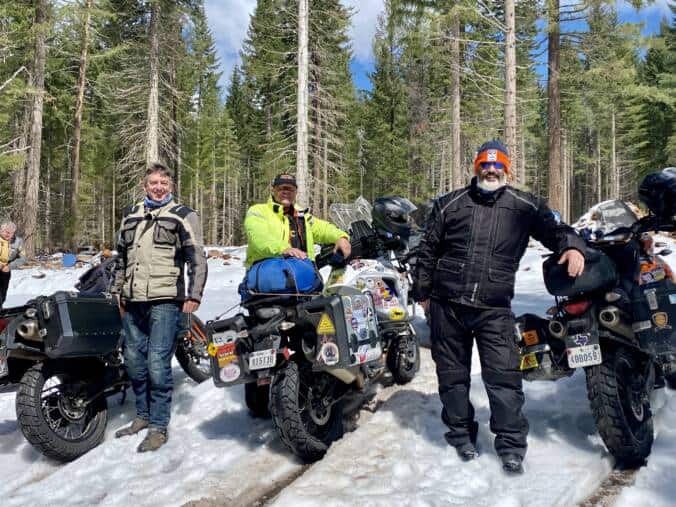 But then the road ended into a wall of snow and we had to turn around. 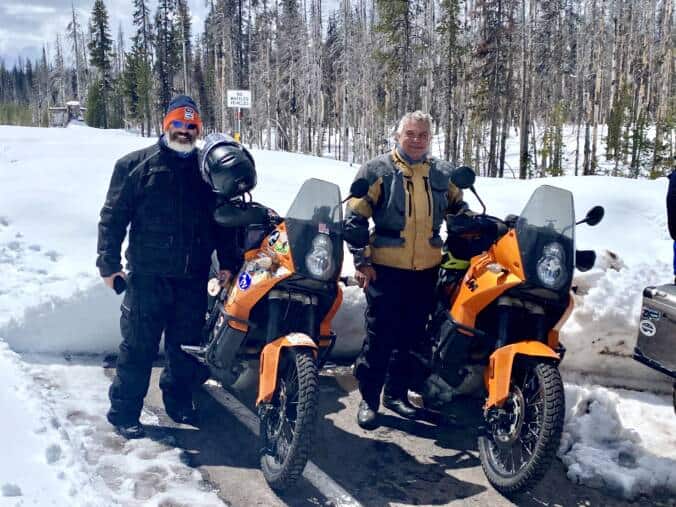 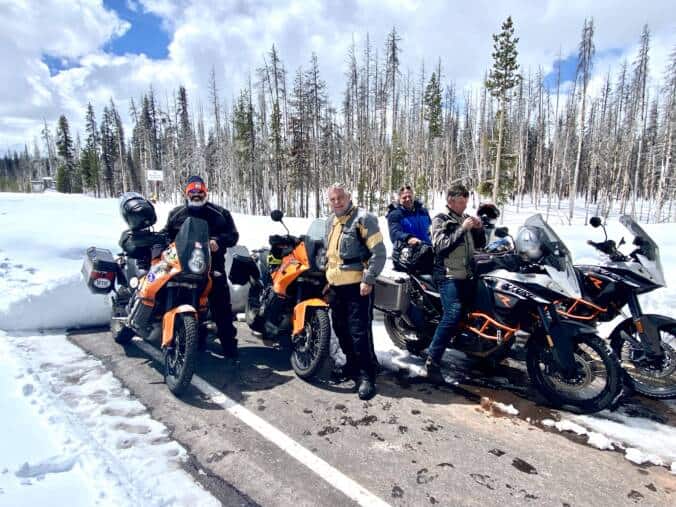 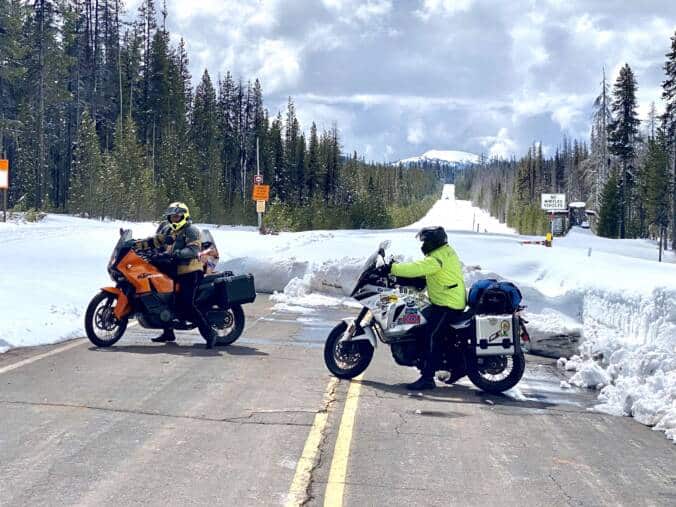 Then we turned off this lovely road, (there were White Water Rafting, Camp Sites, little Inn’s and Hotels along the way, lovely scenic road: 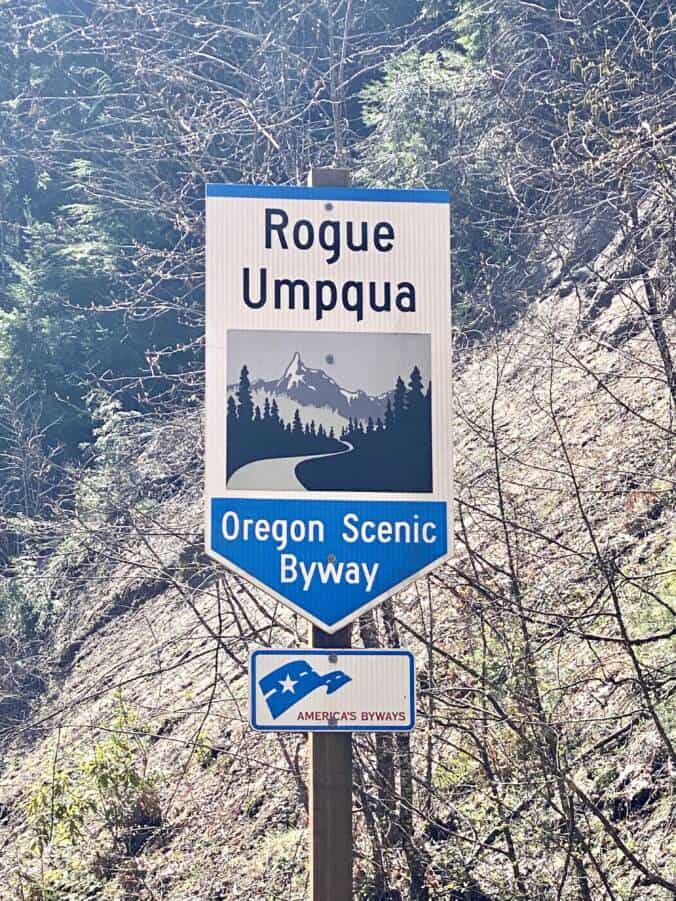 We turned onto a busy road with a few trucks and Holiday Makers with the huge Caravans and RV’s and decided to treat ourselves to a “Fine Dining Experience” at a 5 Star……………… Truck Stop!!! 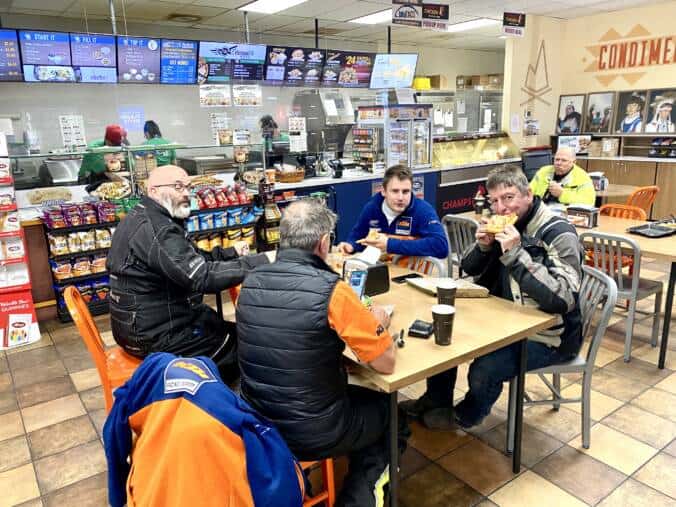 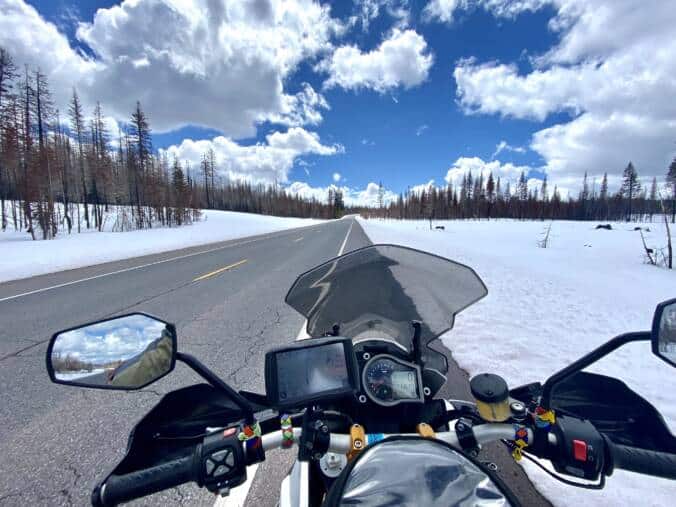 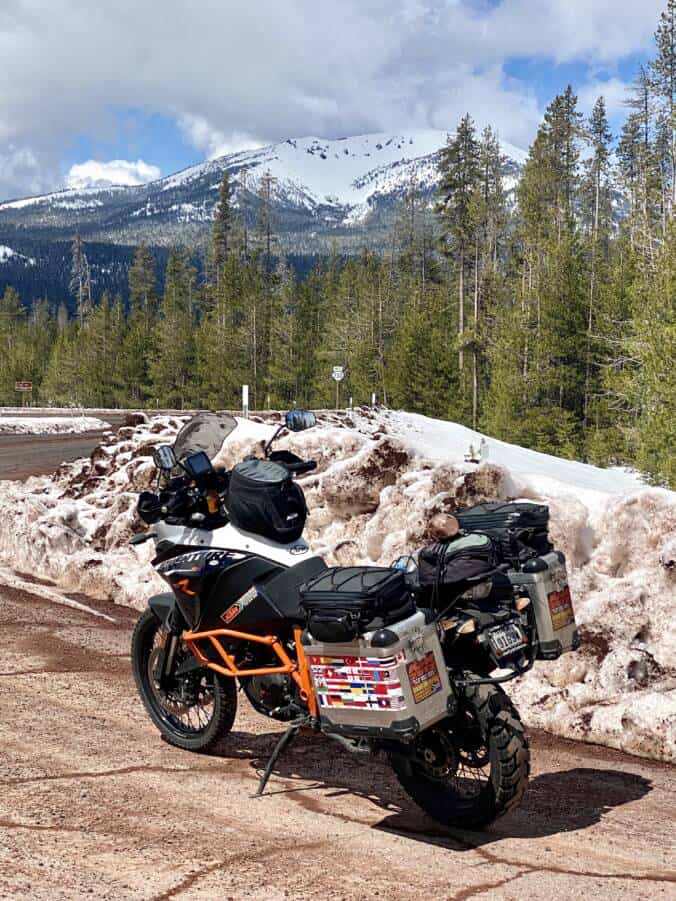 It was 4 Degrees for most of the day, but after the busy road of about 100km we turned onto another road for the last 200km which was through the burnt forests, there was massive forest fires here in California last year that burnt for weeks, and we saw the damage it caused today. Tonight we are in a little village : 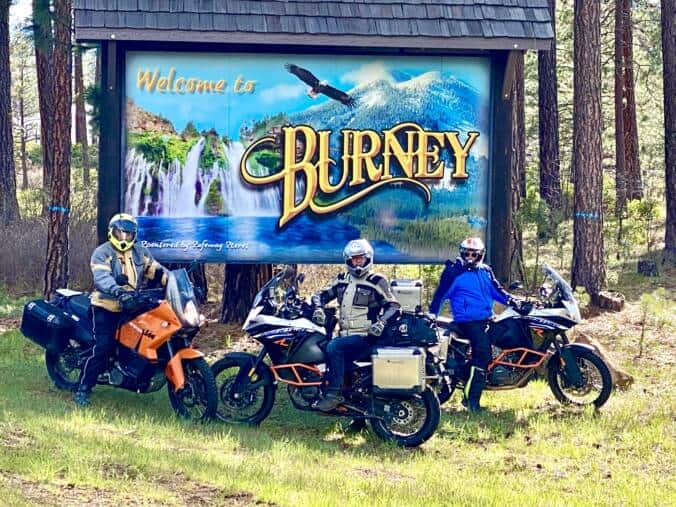 Tomorrow we have 460km to Santa Rosa, in the wine region of California, Napa Valley, where we will go to Tex’s Daughter who is a winemaker and recently won an award for one of her wines. We have been invited to a Bar-BQ at her house and her wine will be tasted, no doubt. So it is a full day which includes wine and a Braai, so I am not sure I will have time to do a Blog Post tomorrow, maybe no story just photos?? The next day is also hectic as we need to go into San Fransisco Bay early on Sunday before the traffic, take a ride over the Bay Bridge, stop illegally, take a photo, then get the ferry to Alcatraz Prison, and then find accommodation a few miles out of SFB so we dodge some traffic on Monday, so maybe no Blog for 2 days, not sure, lets see.