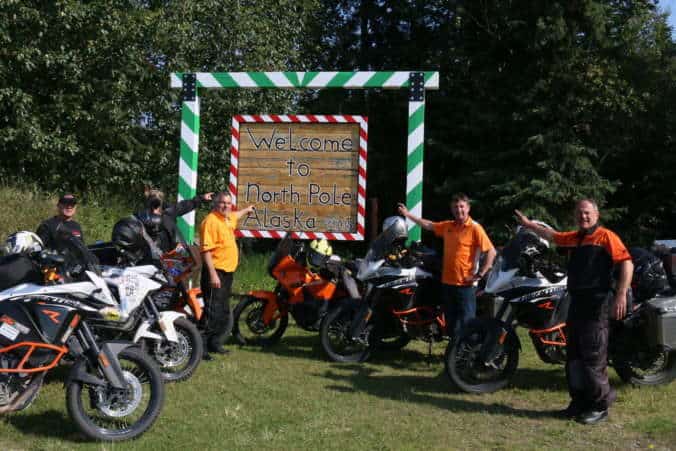 We spent yesterday afternoon reading maps and doing some planning, booking some accommodation and we re-packed the bikes.

We decided to buy a few fuel containers as we are not sure we will make it up to Dead Horse (Prudhoe Bay, our turning around point on the most Northern tip of the North American Continent that you can ride to.) The distance is 390km from Wiseman (where we booked accommodation from Clutch????) but the road conditions might be very bad, in which case we will not be able to get up to 6th gear, which is only when you reach 100km per hour, so if there is a lot of gearing down, stop-start riding we will not make it. There is nothing at Dead Horse, it is an Oil Field where they drill for oil and pump it into a pipe-line, so the area is a restricted area and one need to apply 24 hours before you arrive to go on an accompanied “tour” in a bus to get to the actual Arctic Sea, and Dog wants to swim in it, so we might spend 45 minutes on their bus, to see the sea for 15 minutes, before riding back 45 minutes to Deadhorse.

We also bought special nets for the Mosquitos, which we hear are going to be a big problem……………. but so far not too many.

Pie bought Bees-Wax and believes it will make his boots waterproof, I have given up any hope as my boots are waterproof, its just their closing mechanism which is not, and that I cant fix with wax, so I will just have to continue with Smelly-Vrot-Voet-Feet, at least I know what my feet will look like when I turn 100 years old.

But Rocky heard an earoplane and the Pilot-in-him went in search of the airfield, he returned with news that he arranged a “Flip” in a Bush-Plane, so off we went.

Note the wheels on the plane, they make most of their money from dropping Hunters for a few days and then collecting them again, so the plane must be able to land in the bush and not on an air-strip.

The pilot explained the plan was to fly for an hour, passing a Glacier and looking for some game to view out of the air. We learnt that there were no Elk in Alaska, that there was plenty of wolves, and that the town Tok is pronounced like you say Tow, with a K at the end of it, so its , not Tok. And there are no shops, they are called Trading Posts.

In his he had several Hunting Magazines, and this was the photo on the cover of one, these brave men hunted a sheep. I suppose the sheep can be eaten, so not so bad, but he had several stuffed little animals in his office which cant be eaten, what a waste. And he also told us that he takes Trappers as well as it is legal to trap animals, at least when you hunt them they die quickly, but it is just a different culture here and it is very to me.

No, it is not all the antlers left by hunters below, apparently, Moose and Reindeer lose their antlers from time to time and then bigger ones grow-out again.

I took a photo of the Bush-Pilots sign board where his phone number is on and asked him if I could phone him to come and pick one of us up should we need to get to a hospital, he said no, he did not do Medical Evacuations. But then he asked if we had a Satelite Phone as there is no cell-phone recption outside the towns, which we know by now are about 400km apart. This made me realise that hitting a moose could be much more serious than what I thought as it will take many, many hours to get a person to medical help.

There are some very tasty beer’s made in Alaska;

I went past the RV-Park on the way to the shops and took these photos for those people who dont anderstand what I meant by “the sides slides out\extend.”

Below is a Caravan, it also gets bigger once you extend it after parking it, and note how you just connect it onto the electricity, water and a sewerage connection:

This morning we left at 7h00 and rode for 140km before we got to a Junction, where two roads crossed, and then ate breakfast, (they also were expecting the Mozzies as they had a fly-screen at the door.)

Instead of bacon you get Ham Steak, and note the Hash Browns (potatoes on the right.)

On the side they serve “Biscuit & Gravy” (the biscuitis like a scone.)

We were heading for Fairbanks, the biggest town in the area, as we got closer we saw many people, probably on their sumer holidays, fishing.

Note the boat’s hull, flat, and it is a steel-hull, as they go up in rivers and need to go over rocks, and most boats I saw are propelled by a Jet-ski-type of motor so that there is no prop that can get damaged by the rocks.

Talking about fishing, our 7th Member Peens is still in Anchorage fishing, and having success, (he is know to be able to speak Fish and is hooked on fishing.) A few blogs back I posted the Salmon he caught, this time I think it is either a type of Trout or maybe Pike as Peens is not know for good communication and he had no time to waste by typing a 20 second message with the name of the fish.

Yesterday I saw a trout that was mounted against the wall of a restaurant we had coffee at that weighed 18kg.

Then we stopped at North Pole, where Father Christmas stays.

From the Visitors Centre we were directed to Father Christmas’s house where we planned to have coffee with him, but he was too busy to see us.

They sell everything to do with Christmas Decor and clothing and everything in-between which relates to Christmas.

We crossed several rivers today, see how wide this river is, it must be a site to see it run from one bank to the other after heavy rains.

Some facts about Alaska, it was bought by the USA from Russia in 1867 for $7,2m, this works out to 2c per acre. The 5 most common jobs in Alaska are Zoologist, Geological and Petrolium technician, Airline Pilot (there is a very big Milatary Airforce base outside Fairbanks and we saw 8 fighter-jets flying around, probably training,) Material Moving Workers (which is probably what we call a Trucker, which is also Political Incorrect I suppose,) Commercial Pilot is 5th.

Alaska’s Capital is Juneau and you cant drive there by road, you have to fly in or take a boat or a ferry. The population of Alaska is very low and there are only 737 000 people staying in Alaska. You are also paid by the government to stay in Alaska as the population shares in the mineral royalties, in 2015, 637 014 residents each got $2 072-00 from the government.

I am not sure is we will have wi-fi for the next two days, so maybe you wont hear from me for a few days, but I will catch-up once I get signal.