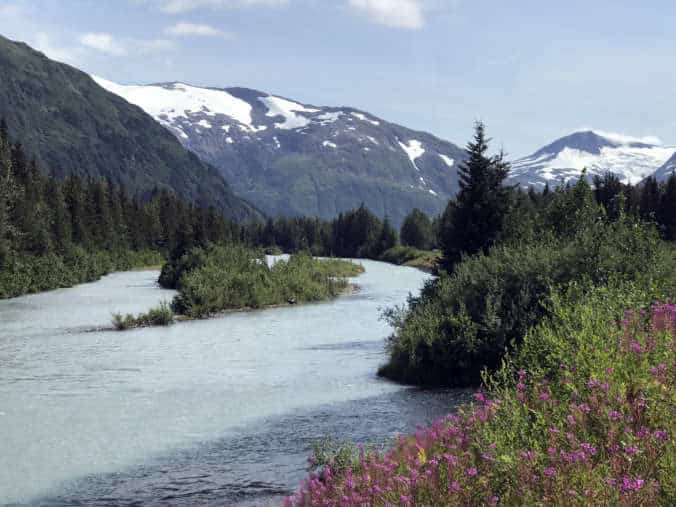 Lats night we went for Pizza, the Barman was very rude, then the Server was rude, then we looked back and the 3 U.S.A. Citizens amongst us commented on how different the Alaskan people are to the rest of the USA, the young guy from Power Sport in Fairbanks was the worts when we asked him about the chain and sprocket we needed, so was the guy in Whitehorse when we needed to fit tyre onto the rim, we have now just accepted that the Alaskans, in general, are rude people and act aggressively towards tourists and people not from Alaska, but that are only the people outside the Arctic Circle, the ones inside the circle are the salt of the earth people. We have just met-up with some other Adventure Bikers who also went up to Dead Horse, (who also met Clutch) and they are from California, and they have even worst stories about how rude the people were to them. And then they expect a 20% tip on their service?????

Our accommodation was in the Rainbow RV Park & Motel, so we could experience the camping-scene from a distance.

As we believe in the Boy’s Scout Motto “Be Prepared” the Ladies on the Tour were given some responsibility, they had to drag a You-Haul (Trailer rental) behind the rented Suburban in case Dog’s bikes sprocket finally gave-up the ghost.

The road started out wet, and cold, and my arms were freezing ( I only discovered this afternoon that the two vnetilation-zips on my arms were open, skaap!!!. The road was great and we had beuatiful views of the Denali National Park, and it stayed nice beyond the park.

We rode through Anchorage, the Capital (smaller than Bloemfontein) and turned right and headed out on the pininsula. The roads was soon running along the sea, but it must have been low-tide, so it looked more like the Prawn-Flats.

Soon the road was snaking between glaziers and snow capped mountains, the Fire Weed was still in bloom and the rivers were glacier-blue.

We stopped at a very well posted spot to watch the Salmon swim up-river, we waited on the deck with other tourists, but Salmon was late, we hear that they were spotted at other places but our spot…….nothing. I sat with my long-lens focused on this spot………., sorry for me.

We had to pass through a very special tunnel, it was made through the mountain during the , when the USA needed a strategic place to offload supplies should they have to fight a war against Russia and Russia blocked all the other Ports, or should the ice block delivery’s to the Northern Front (near Fairbanks.) The water in front of Wittier is one of the deepest Ports and never freezes over in the winter, so supplies could arrive at Whittier and be transported up, provided there was a hole through the mountain, hence the tunnel. Today the tunnel, a single-lane size tunnel, is shared between the train, and vehicles. So vehicles are allowed through the tunnel on the Half-hour going towards Whittier, and on the Hour going towards Anchorage, and then there are trains going through the tunnel as well at certain times. This sounds like no problem, but for a bike, you have to stay in between the train tracks, in the dark, in the cold, on the little-piece of wet-concrete between the tracks.

W e arrived savely in this “Dead-end” town, there is a ferry that stopes here, but if you dont take the ferry you have to turn around and ride through the tunnel again, and as the Ferry Company is striking, we are going back through the tunnel.

Hundreds of boat’s kike this in boat-yards, all Aluminium (for should they hit ice-bergs) and an enclosed cabin due to the bad weather year-round, and they have huge motors.

The internet tells us that Whittier has 6 months rain and 6 months show per year and only 1 week of sunny days, aren’t we lucky, today is one of those 7 days with sunshine.

I hear while I am typing this Blog that the 1290 KTM of Tex has a leaking radiator, no doubt due to the shaking on the Dalton Highway. But I hear that Pie and Tex have removed it and plugged it with soap, for now, until we can get Pratley Steel. It’s a 1-minute job to plug it, but a 1-hour job to strip it out from under the fuel-tank and inside all the side panels and faring.

Dog’s bike made it to KTM in Anchorage, but they are closed on Mondays, and the spares are only arriving late tomorrow, maybe????

So the bike is now parked outside the shop we will make a call tomorrow about what the next move is as the ladies are flying out tomorrow and we were supposed to move on again tomorrow, but now we might have to stay another day in Whittier and then make up the lost day over the next week.