I have ridden Adventure Motorbikes for the past 15 years and today rates as one of the top 3 most extreme, but not from a beauty, or scenic, or exciting perspective, but from an Adrenaline or “Dig Deep” perspective. It was a day filled with a litany of errors, all timed to let the pressure cooker slowly build up steam and slowly the temperature rose, ( not just the temperature of the midday heat, but the temp. of each one of us (OK, re-phrase, not the temp of old Rocky, as he stays calm when all hell breaks loose around him and never stops thinking logical, straight, ahead and in an instant has summarised the situation, placed everything that has just happened into its little box and in an instant he computes the solution, also not Tony and Gregg in the Land Cruiser as they have air conditioner.) And if I am 100% honest, Tex had just joined us today after a 4 day break from the group, wining and dining the entire government (just joking people,) just enjoying fine food and wine and hotels while we have been slogging away in the countryside. So the three others were really hot and bothered when it all went pear shaped.

But let me rather post some photos of the day and then at the end I will continue with the day and how everything stacked-up and then were piled up and eventually turned our day into a nightmare.

It started well, we left and soon we were out of the dirty Industrial Hub and found ourselves in an agricultural area. (We know only two Chinese wines, Great Wall and Greet Wall the latter is a copy someone did in China of an Chinese product,) and maybe their grapes are grown here in this area, 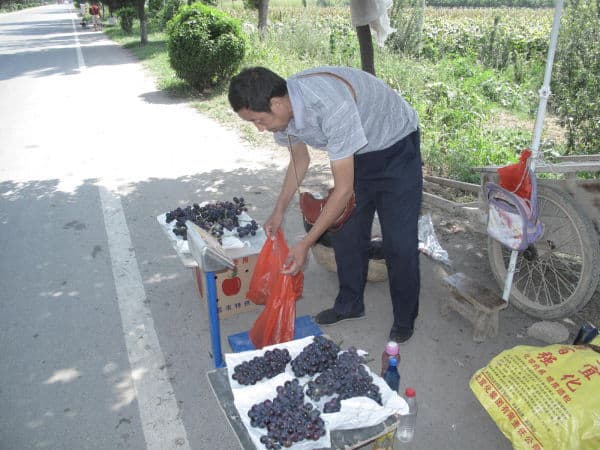 Temp – 32 degrees : But just as I thought things were improving for us we got lost. We found the town of Lin Tong where we thought we would find the Terra -Cotta Warriors, we found many signs in Chinese and each started to search for it on their Disfunctual-Out-With-4-Seconds-GPS’s.

Temp – 34 Degrees : We all found something (was it the Museum, Moseleem (the place someone was buried) or Art Museum (All listed under Terra-Cotta Warriors.)

Temp – 35 Degrees – A lot of planning, scheming, suggestions and plenty decisions are made, all based on an assumption their choice of GPS suggestions are the correct place and that their GPS is going to get us there, all this is then shouted to one another (who is just as deaf as you over the noise of the bikes, traffic and non-stop hooting, (if you cut in front of another, even a truck, it is OK as long as you first hoot.) But Pie also muddied the water by proudly stating that the location must be in town as “they discovered it when digging foundations for a new building.

Temp – 36 Degrees – We all take of as a group and then I continue straight and Peens turns left and the group is struck with confusion and then splits up.

Temp – 37 Degrees – We eventually regroup, all woes and shouting, nobody hears properly, once again. So an executive decision is made to delegate this task to Peens to switch on his phone with Chinese Data Sim and use Google Maps to get us there. We then follow him in circles but after sweating a few cups we eventually find the resting place of the Emperor with his 6000 Warriors buried with him, also buried with him is the 700 000 “workers” (no one calls anyone slaves anymore, that is politically incorrect and sound better to call them workers,) who the emperor had killed to keep the location a secret from him enemies or challengers, (wonder who closed the grave?)

Temp – 38 Degrees – We strip off our wet riding gear and put on some shorts and saddles and do a two hour tour. By now, most of us are talking to each other again but the two most hard-headed ones are not, (no, not me.) 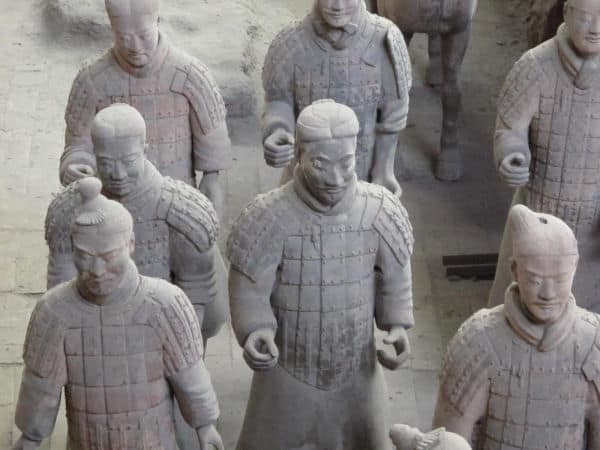 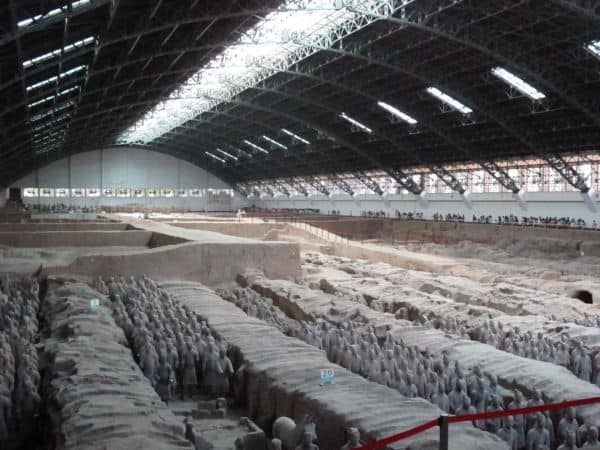 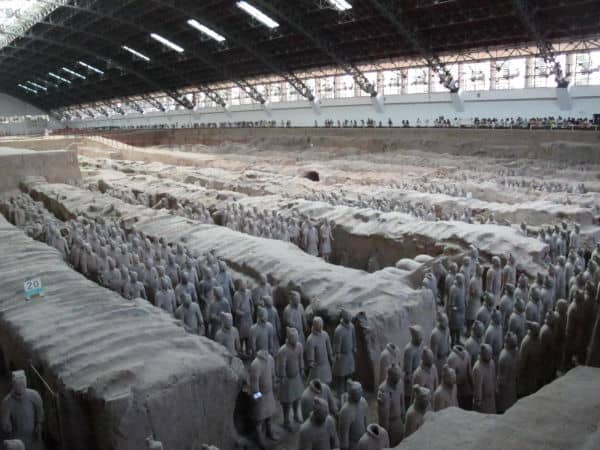 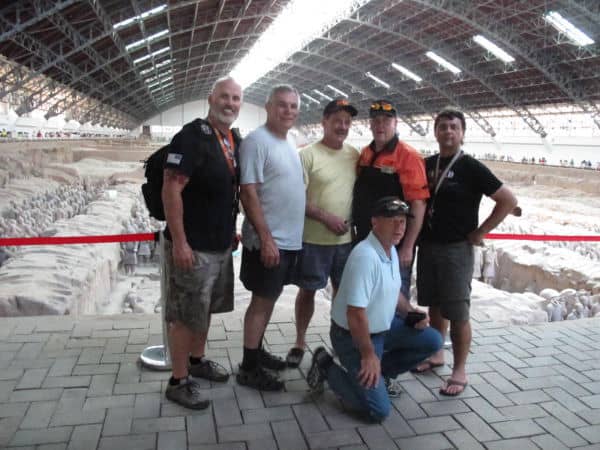 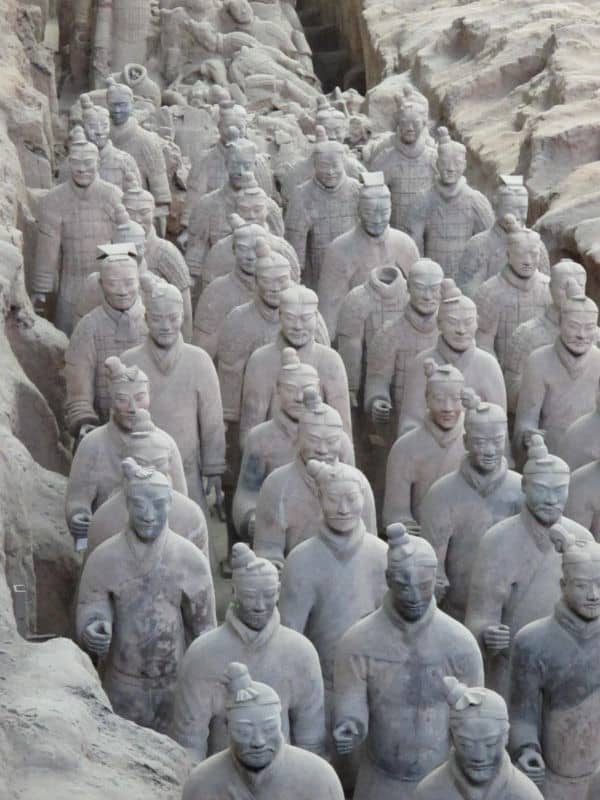 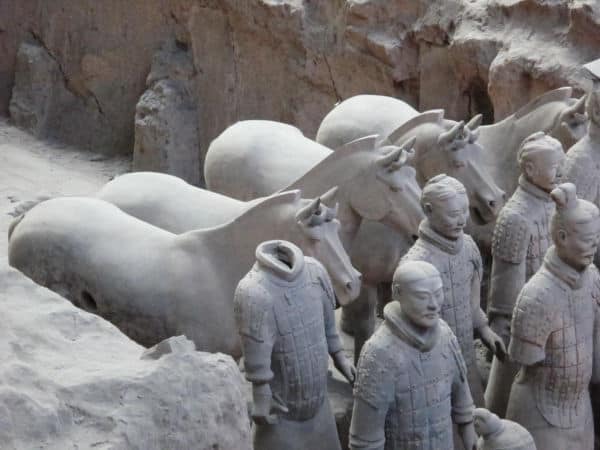 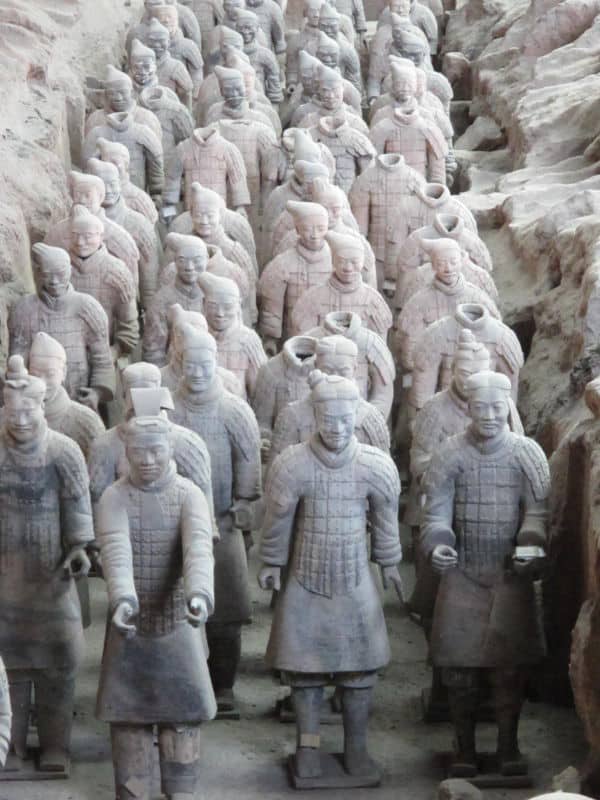 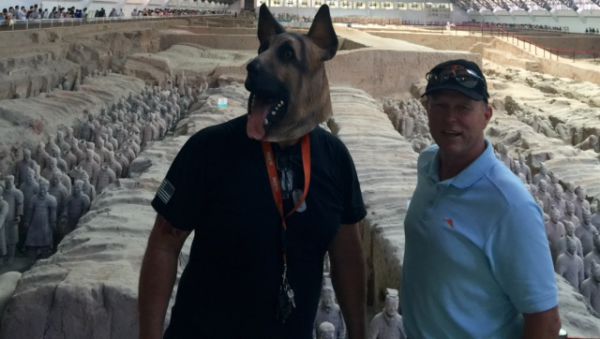 They were covered with wood (see dents in the earth between the rows of warriors,) and then ground was placed on top, and this all happened 250 Years before Christ. It took the 700 000 ‘Workers 40 years to make all the warriors and each ones face is different, the details on them are amazing (fingernails, fingerprints, and each of their Tunics were painted a different sequence and colour pattern as the other.) There paint has now faded as the ancient paint could not handle the sun and oxygen but some remains buried under covers to preserve the colour.

We also learnt that this site was discovered in 1974 by a peasant farmer digging a well and that he is still alive, was taught to sign his autograph but remains a peasant farmer today earning a Pension of R2000-00 per month in spite of what he nu-earthed.

There are three pits where they are still restoring the warriors as most were damaged when the wood eventually collapsed and a large amount were broken. 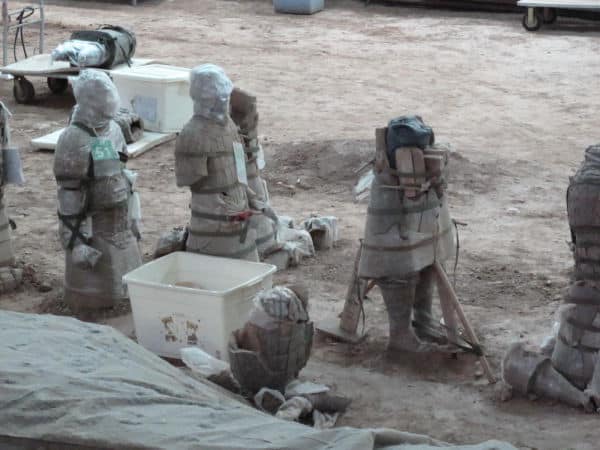 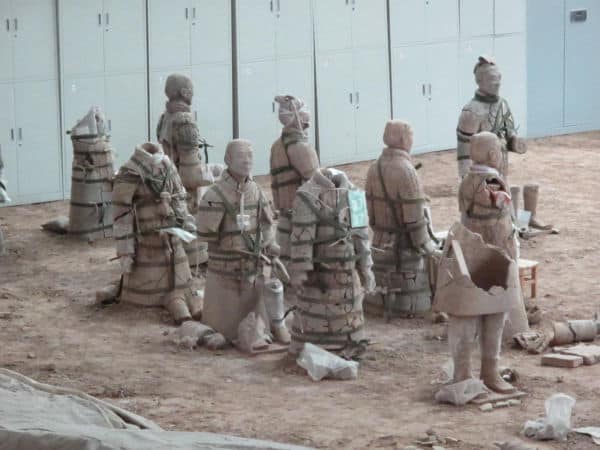 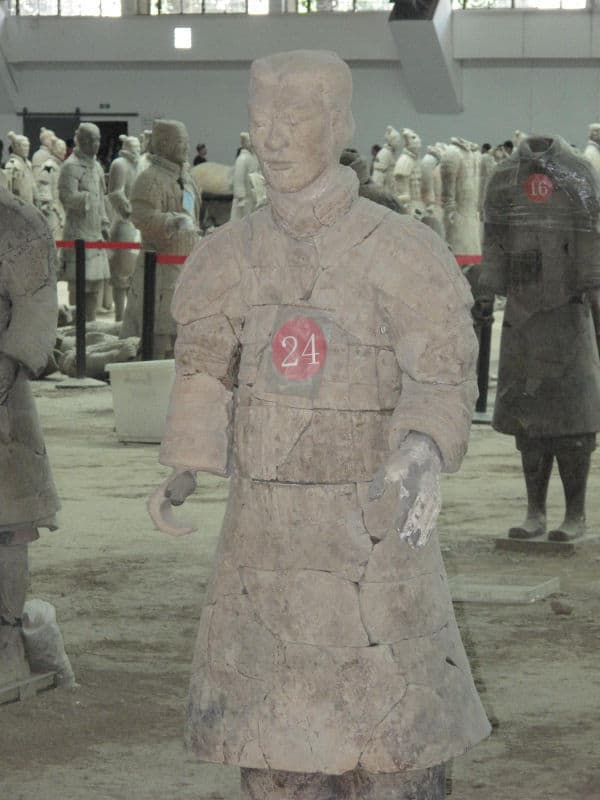 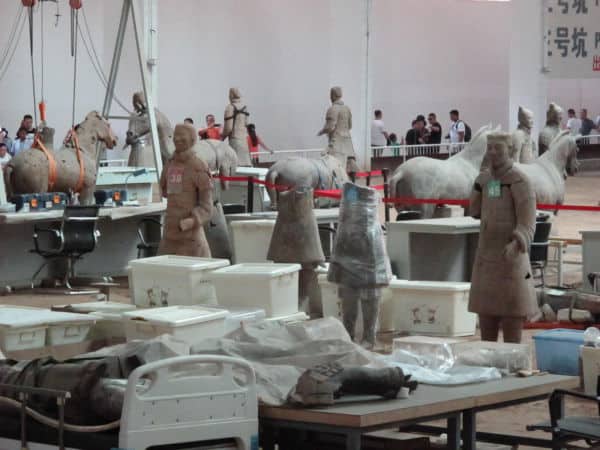 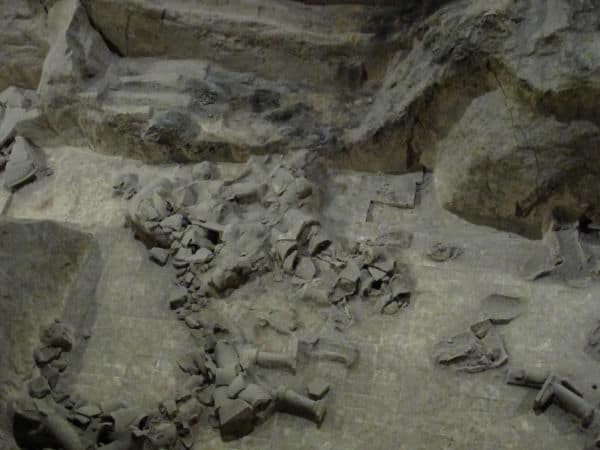 There are senior generals of his army as well (Greg, can I now use the word army, he was a little insulted that I used the words Marine and Army in one sentence, I now know that the Navy produce the better guys not the army.) All the older guys have wrinkles are are a litter fatter, but the most famous of all the warriors was the Archer, only one of them were found (kneeling position.) 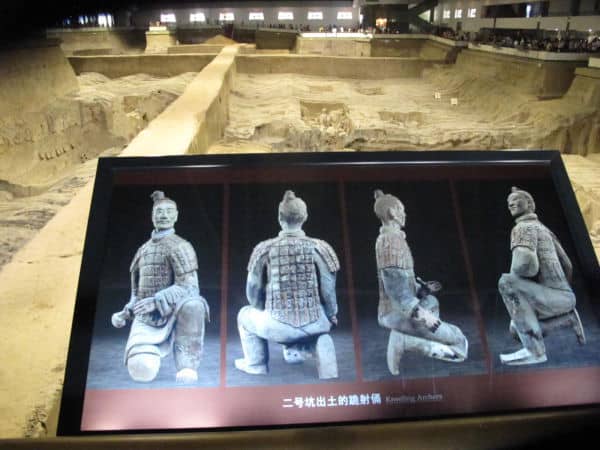 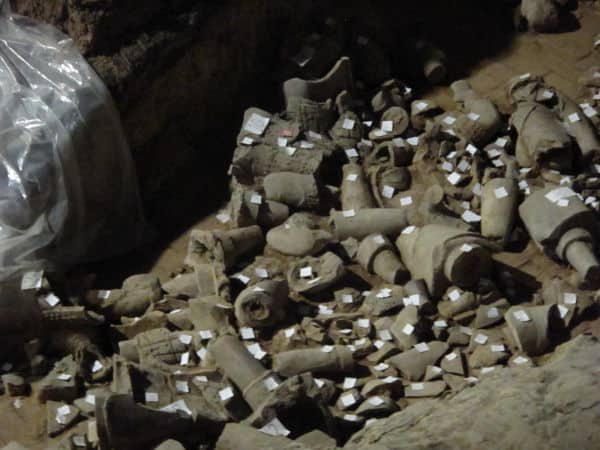 Note the horses bridals, all still intact as they were made of metal. 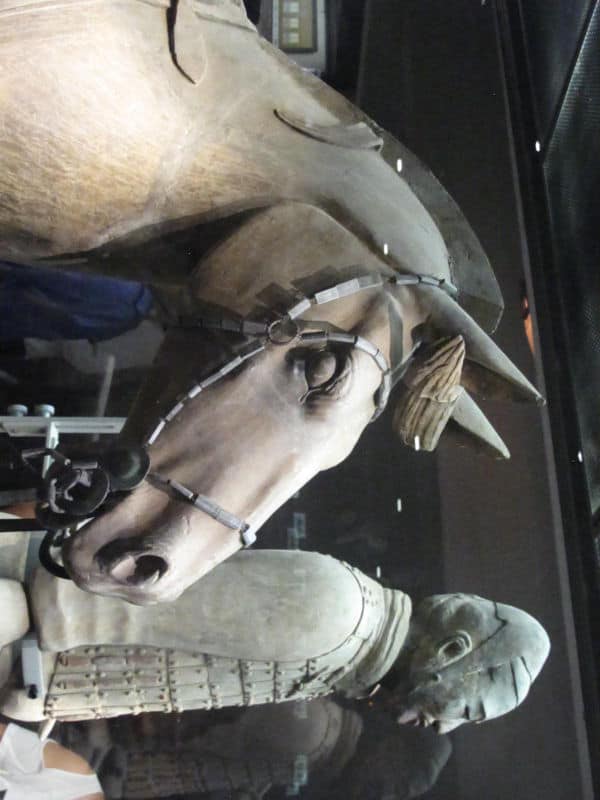 Temp 39,7 Degrees – We hit the road and Tony warns us that we have to ride through Xi-An, a very large city, only 26 000 000 people (all of them decided to take the G108 I think.) It is 16h30 and we decide to rather follow the Land Cruiser onto some Ring-Road we are allowed to get onto, but then we get grid-locked and all the bikes start overheating, the instrument panels are flashing (did not know it could do that until now,) more red lights come on and now we have to get air over the radiator as the fan cant blow enough warm air fast enough, and so begins a mad dash, first on the special lane for Tuk-Tuks, then when that lane stops I choose the bus lane, and when that stopped working we took the pavement. When we got to a red-light we would park on the pavement and switch off the bikes and let the fans continue to do their job, to no avail. We would cross the road with the pedestrians and so we plodded along, eventually we could not see the Bakkie behind us anymore, and when we phoned we learned that they were on the ring-road. So we had to continue down the main road. And then it got nasty. We eventual split into two groups, Tex, Pie and I were now on our own and I had visions of all 5 KTM’s melting under us. We had one turn to make and with the help of the useless GPS’s I got it wrong and we tried to go around thecity block but ended-up in a market. So we turned around and rode up against the one-way, no one even flashed at us, we were just behaving like all the other bikes. A few more road crossings with the pedestrians got us back to where we went wrong and we eventually got out of the city by Navigating with the Sun that was setting in the West and that was where we were heading, so in spite of all the money spent on Navigation we follow the sun, which was setting fast.

I have only ridden at night 3 times before, all of those times were in very remote rural African areas, tonight I rode 60kms on a road being built, at night, by trucks coming to deliver sand and cement, a 24 hour operation, and then you add to that the dust, the scooters ad trucks without lights, a few dogs and more dust and gravel road surface. But with 60km to go you have push through.

It took us 4,5 hours yesterday to ride 120km, two hours in the dark. So when we got to the hotel we were welcomed as celebrities by the crowd gathered in the parking-lot in front of the hotel taking selfies of themselves in front of the Reindeer Horns (did I mention they were re-attached.) Very dirty and dusty we crawled to the showers and then we had a meeting to discus what we have to do to avoid having a repeat of this disaster.