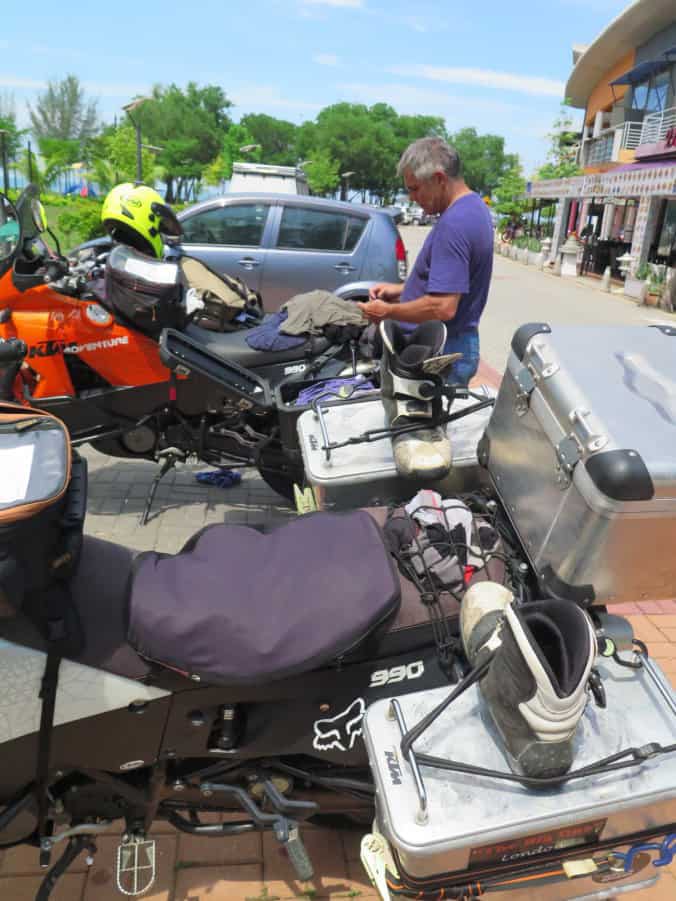 Today was so hot even I took of the riding gear and rode in shorts and sandals. Here Pie is trying to dry his cloths which got wet when his bike was washed yesterday, so every time we stopped today he had to open his panniers and spread all his clothes out in the sun all over his bike to dry.

It is so much different traveling in Malaysia, its people are much more “Indian” than the Thai people (who are more Oriental,) it is also a Muslim Country and Ramadan is starting on the 3rd. In Thailand you can sit anywhere and get a cold beer, even next to the smallest road far of the main road, but here in Malaysia it is almost a “dry” country at the moment with Ramadan around the corner, and if there is a Mosque in the area no place with in a few kilometer radius will sell any form of alcohol. We have found alcohol the previous night but there is such an exorbitant Government Tax on it that it is reducing the demand on alcohol, a 500ml Beer costs R80-00 at the corner shop, much more at the restaurant. We last experienced this in Rural Turkey.

This however worked very well in my favour last night as I was to be buying the expensive Cocktails and Very Old Irish Single Malt Whiskey, but as the area we stayed in last night in KL was close to a place of worship, no alcohol was sold. But there was also no place in the area where one really wanted to eat, our hotel was not in a part of town where the locals stayed, it was near the city center and not much happening in the Business District at night, not even on the hotel. So we walked down to the lake and Pie decided to liven-up the already boring-stick-a-needle-in-my-eye evening by giving us a lecture on all the different Valves we walked past and he went into detail how each valve worked, (valves is his specialty, he had an Engineering Workshop producing valves for the chemical industry before he changed focus to the property industry.) My ears are still hurting, but now I know that a valve is not just a valve. 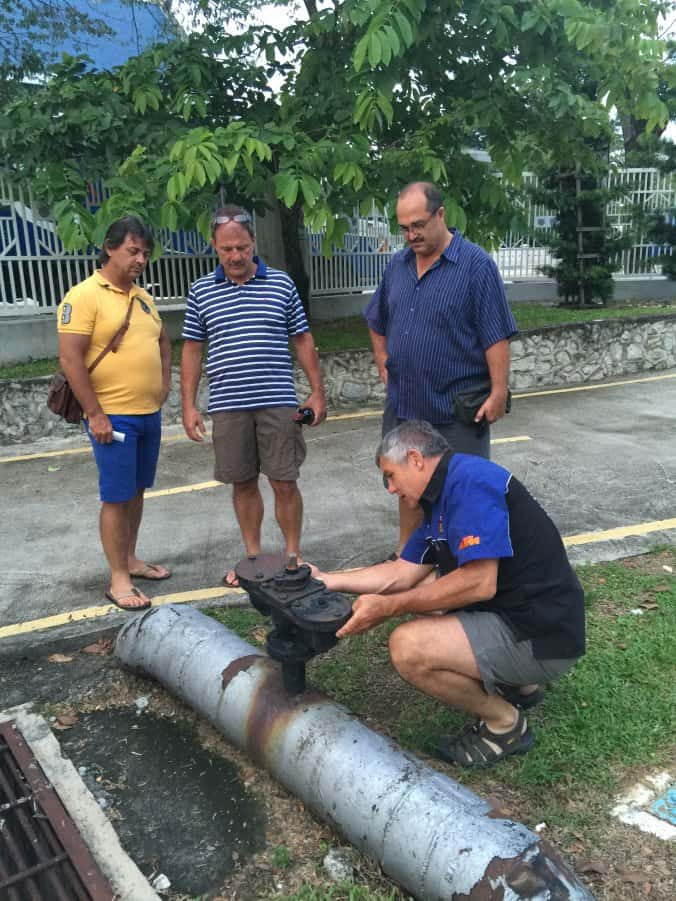 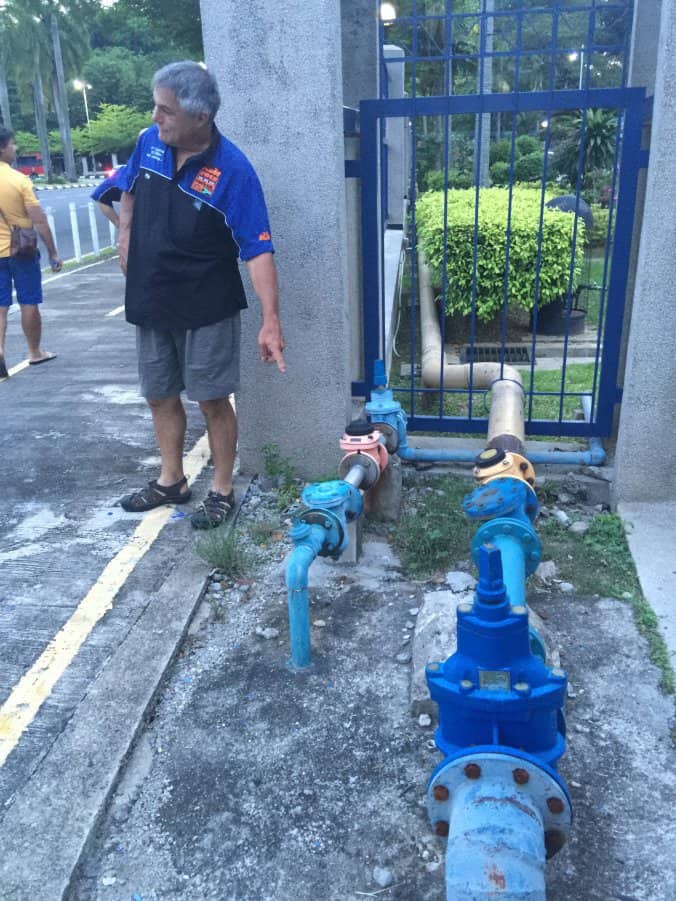 We could not find a restaurant outside the Mall (and we refuse to eat in a Mall) we did however consider walking through the Mall and video everything and then sell this info to our friend that develops Malls, that way paying for our trip, but then we decided he had most probably already seen this mall so then we found a Nando’s on a street corner. We asked them to open our red wine we brough with but this was grabbed and taken to the back, returned un-opened and hidden inside a paper bag, no alcohol could be shown in public. So we ate out chicken and ordered a few Cokes. 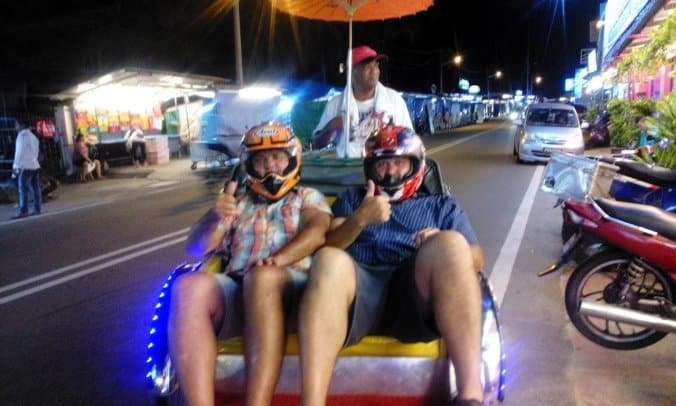 We did not pay for breakfast at our hotel and left at 7h00 and headed out to see the West Coast of Malaysia South of KL. I knew the best beaches was on the East-coast and as part of my original route planning we were going to follow them down into Singapore, but as our plan has hit a brick wall and we had to move the port for the shipping to KL we now only had one more day’s riding before we had to return to KL to load the container, so we took the small Forrest path towards the coast. 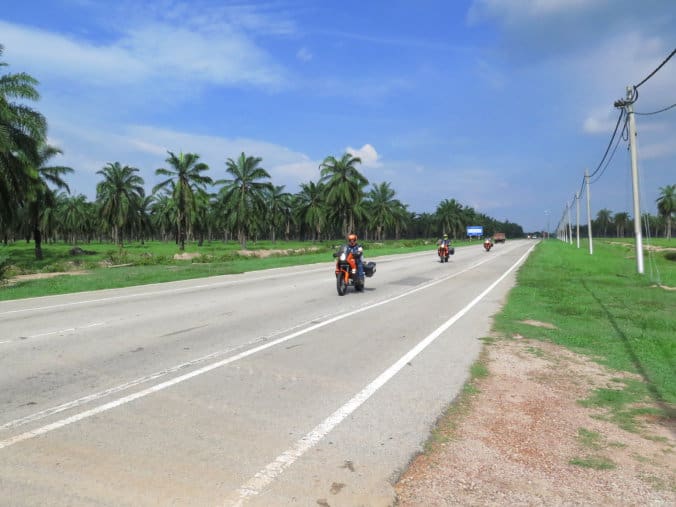 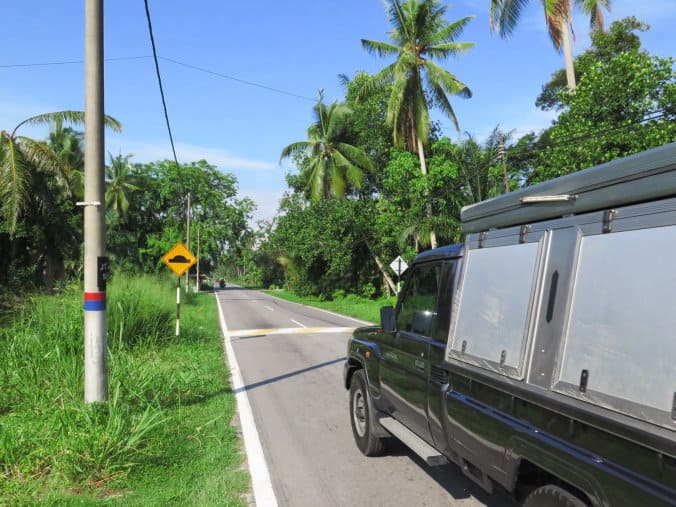 We stopped at a local “Curry House” for Breakfast, yes, the food has also changed form Noodles and rice to Roti (type of bread) and curry.) Note the “Policeman’s Coffee” (instant coffee with Condensed milk at the bottom, the sweeter you want your coffee the deeper you stir your coffee.) 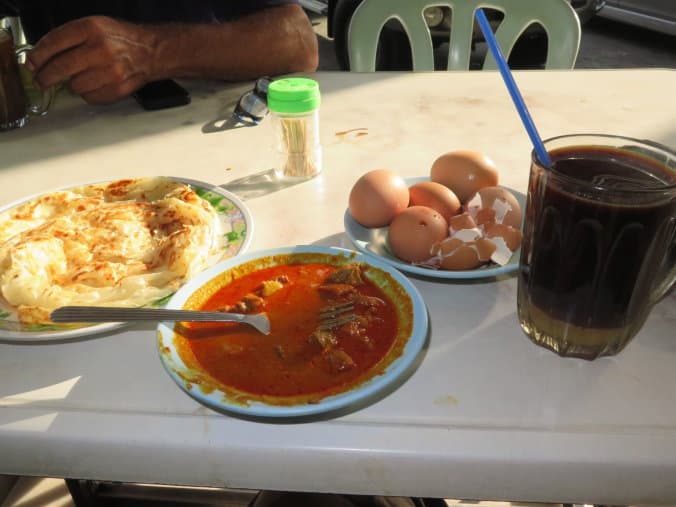 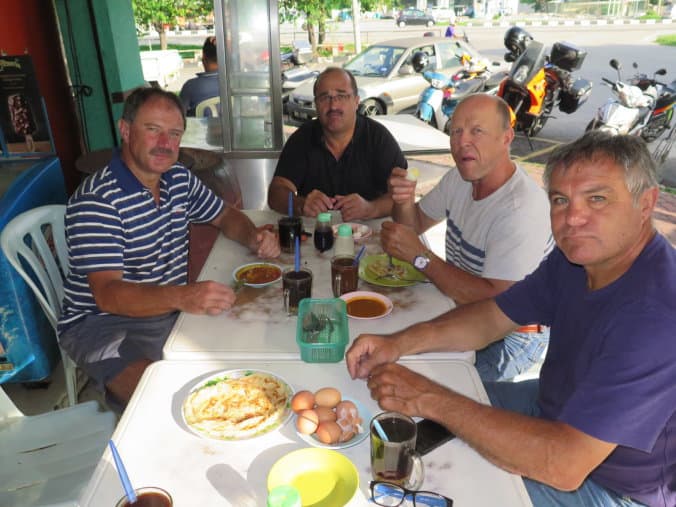 During Breakfas the problems that arose with our shipping was discussed and it was time for someserious decision making. In a Nut-shell : Shipping the RSA bikes to the USA was a problem as our paperworkwas not 100% in order, our Carnetts de Passages (the equivalent to a vehicles passport) were out of date as they were stamped when the vehicles arrived in the UK but when we left the UK there was no border crossing until we got to Romania and by then we had forgotten about them and they remained UN-stamped, and now these vehicles has “popped-up” in Malaya with no paper trail explaining how they got here. But this is not an problem we will not be able to eventually resolve, it can, but as our “Funny Road Certificates issued when we entered Malaysia is expiring on the 28th we have to load the containers before the 28th, and then the clock starts ticking to get the paperwork 100%, and if it takes longer you just have to pay more while the container stands and wait for the paperwork to be 100%, but the cost per day will be over R1000-00 per day until the paperwork is 100%. We can ship to any other destination without the slightest problem, (we almost decided on shipping to Canada) but as we wanted to ship RSA bikes to the USA our paperwork had to be 100%. So after much deliberating a decision was taken to ship the RSA bikes back to RSA and use them to do the Cape to Cairo Leg, the African Continent section. And then Tex will organize American Bikes for us in the USA, insure them there, register them there and we will use them to do the North American and South American continents. A lot of North America is in the Northern colder parts, so the weather window is very small, so it makes sense to have two bikes on two continents rather than one bike on 1 continent with a very short window.

But there were other reasons as well, one can only bring a foreign vehicle into the USA for 1 year, you can leave the USA and bring it back once again during the 1st year and get another 1 year, but then never again, so if one would ride the bike into Canada and enter into Alaska (the USA) then one would have used your two entries into the USA (once by boat and once when entering Alaska by bike) so things were getting complicated, better we ship back to RSA. 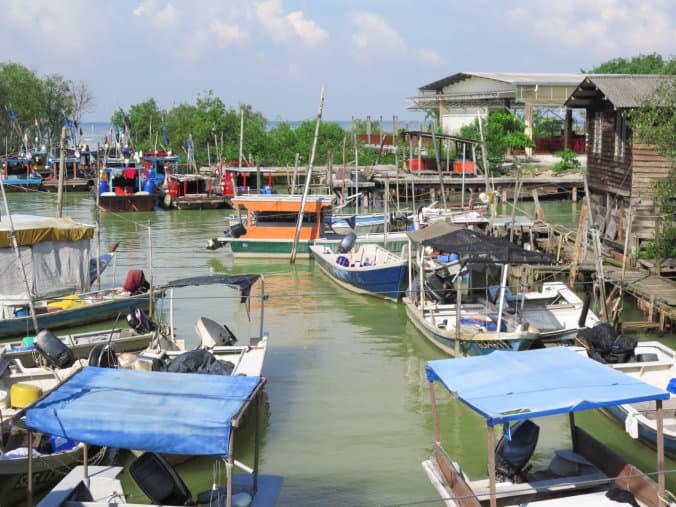 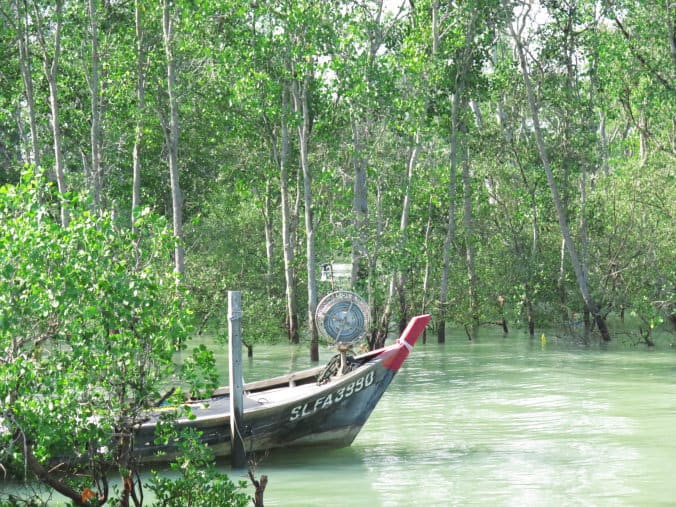 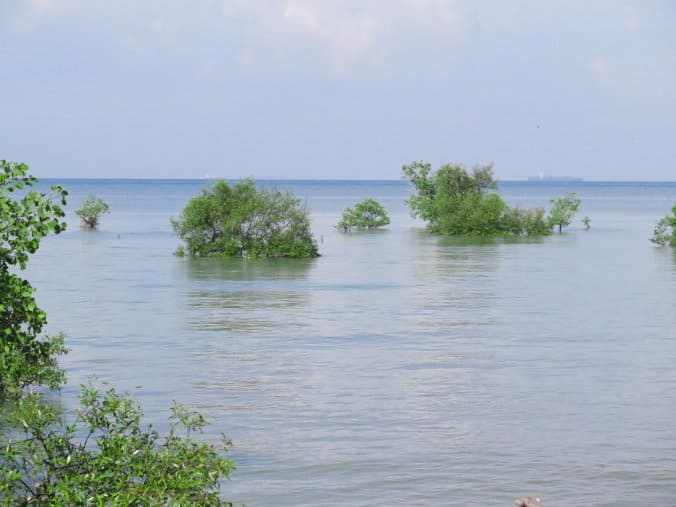 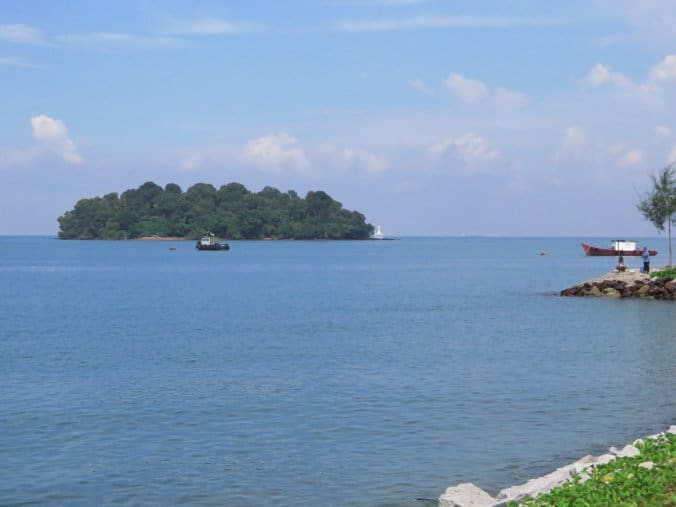 The group got separated and our group ended up on the beach looking for a piece of heaven. With the recent heat Hennie has been offered to ride someone’s bike so that he could be out in the midday sun and heat and the biker could cool-off inside the Aircon Land Cruiser. We decided this was un-fair and it was decided that the air-con in the bakkie had to be switched-off in sympathy with us onthe bikes in the sun, but I suspect this was not done and the “sweat-drops” on the person’s face getting out of the Cruiser was from the waterbottle and not sweat. 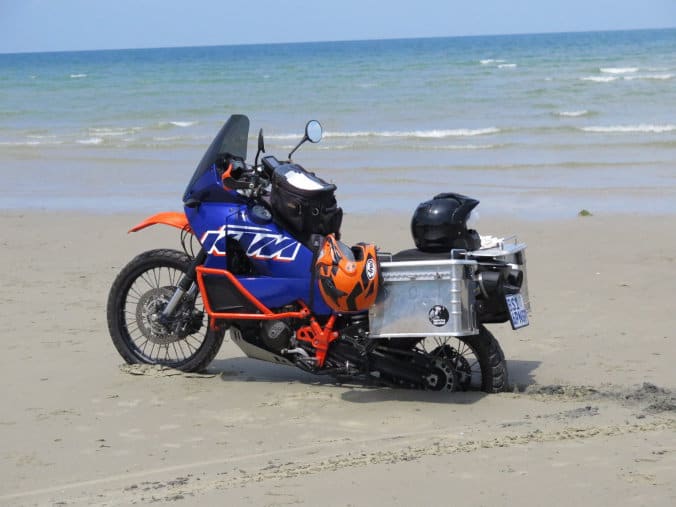 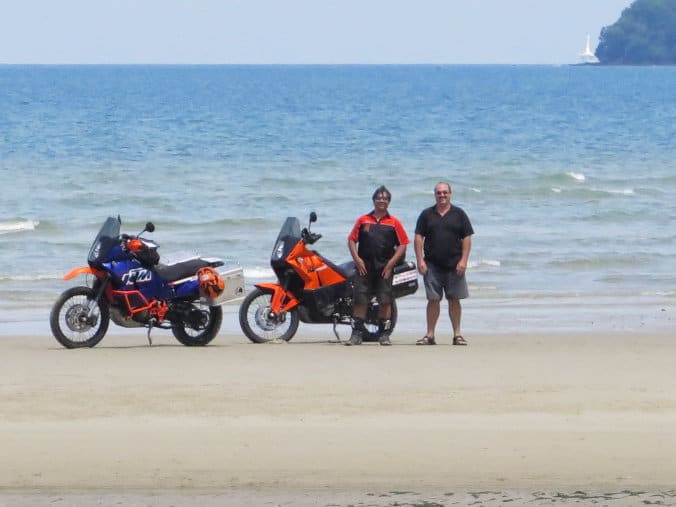 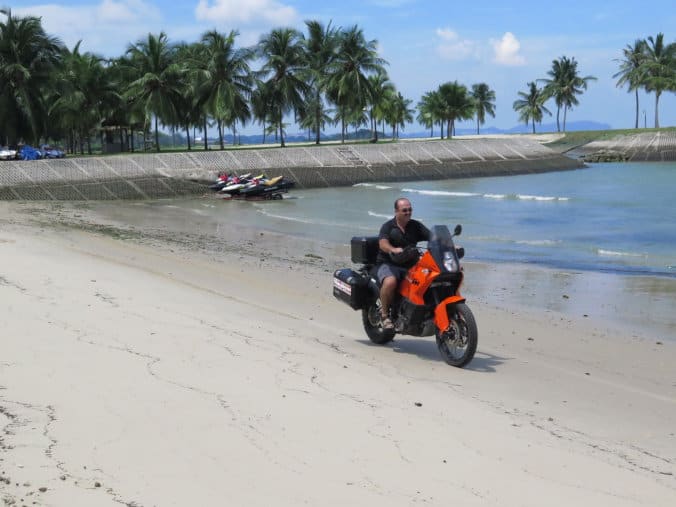 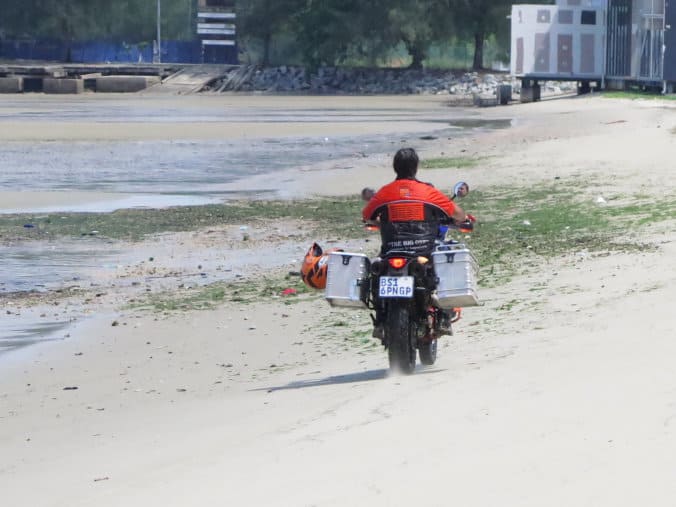 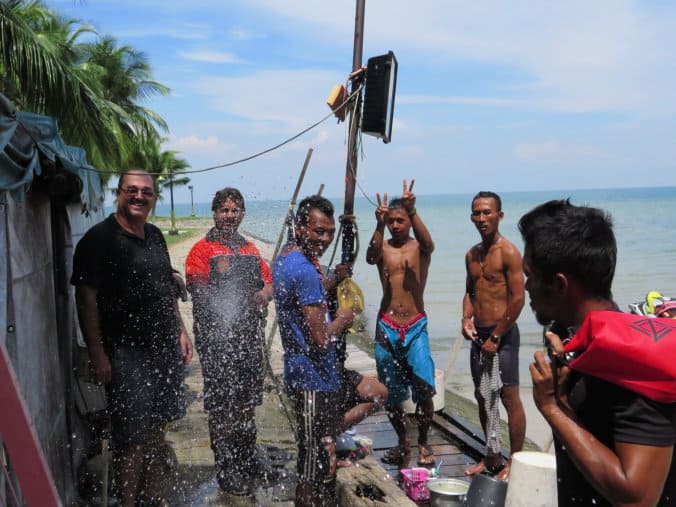 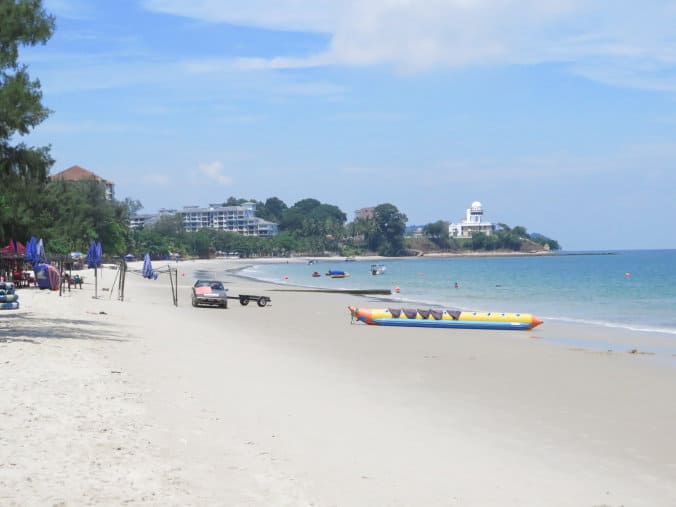 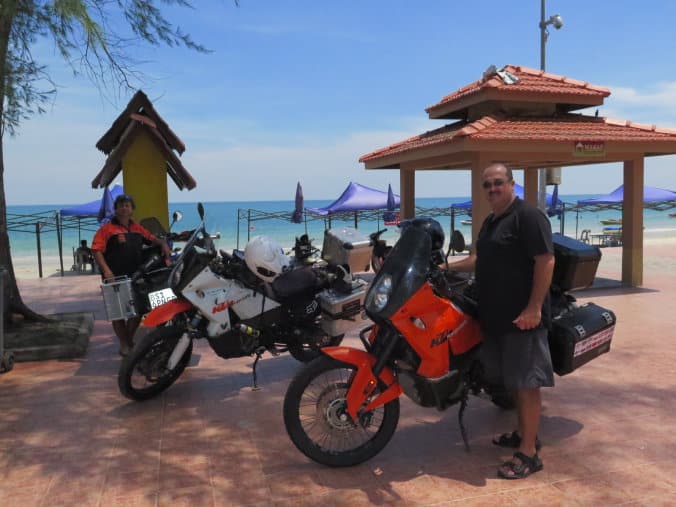 But I think we found the beach where all the old Jet-skis go to die. 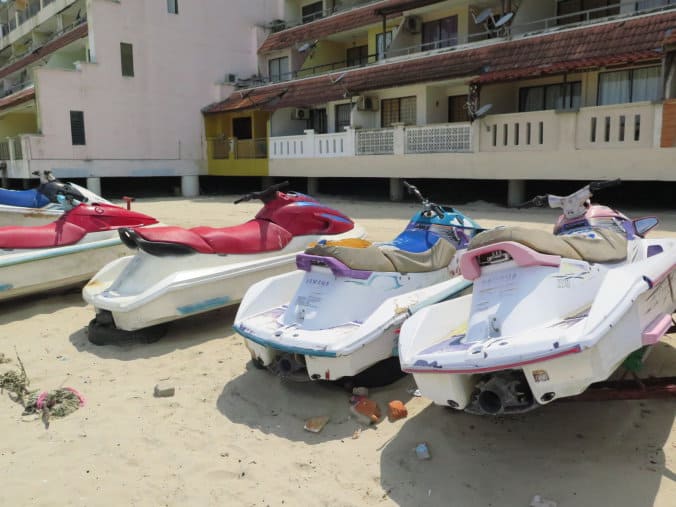 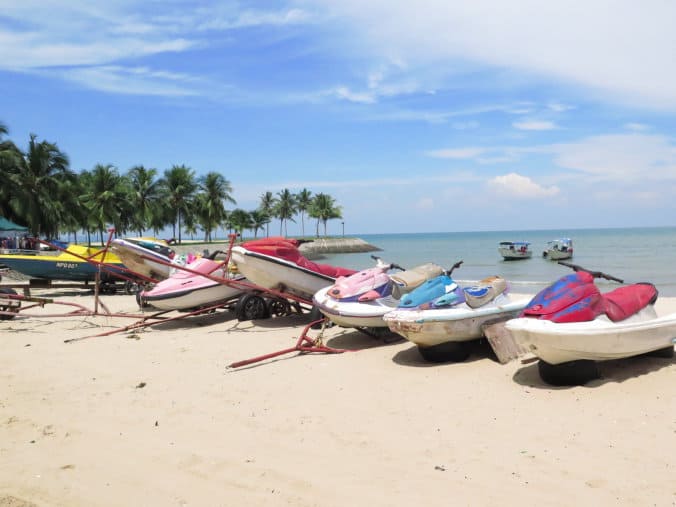 And I spotted some buildings begging for a re-development right on the beach (wonder if my wife will allow me to come and sort this lot out. 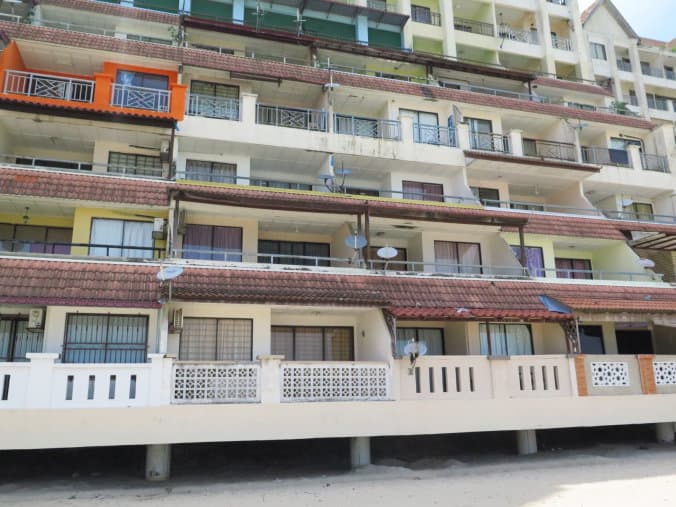 With the heat as hot as today we were asking for Casper every time we stopped but Casper could not be found, no Casper today or in Malaysia. Casper is what it sounds like when the waiter offered us beer on the 1st night in Malaysia, we only later discovered they way Carlsberg beer is said with their Indian accents sounds like Casper. 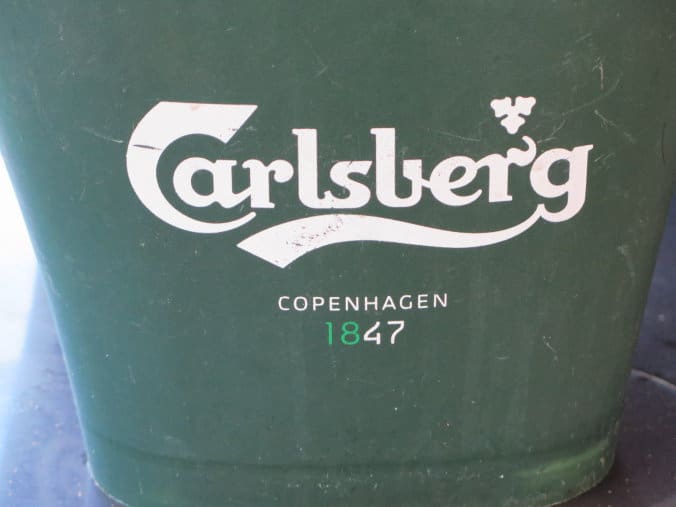 Tomorrow we ride back to KL to load the containers.