Last night it was off to a Bar-BQ street “restaurant” after a stop at a wine shop selling only Chinese good wines and cheap copies of the good wine. We decided to drink the copy wine first and save the good wine for after dinner, but then the good wine under the table were knocked over and we just had the copy wines.  There is a type of a buffet next to the road with fresh meat and you choose the meat and grill it in the middle of your table and you can eat as much as you like, it is just that there are no names in front of the meat and Tony is not always close to point out which is the chicken and which is the Frog. There were a few other things available as well, but lets get on with the story, this is a family Blog. 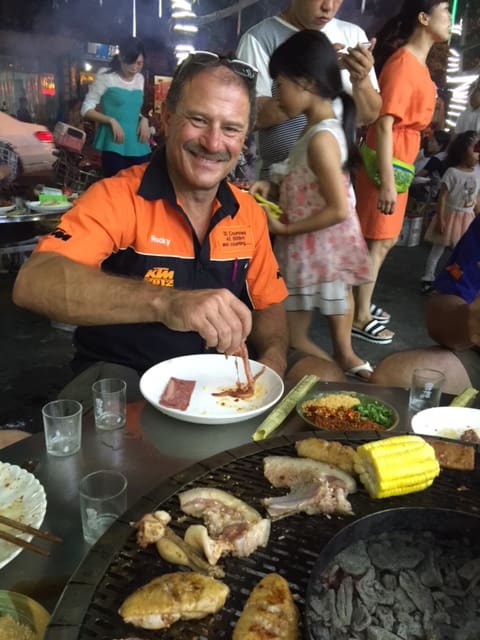 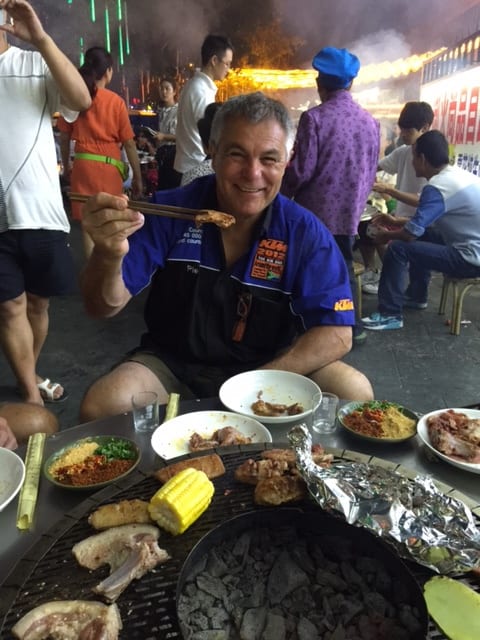 I dont think Tony is so impressed with us as we let him choose the restaurant only the 1st night, very grand in private dinning room, not our cup of tea. But I have not heard anyone complain about the hotels he is choosing, wow, 5 Star hotels at a fraction of the price we have been paying for accommodation up to now, I guess it is supply and demand as there must be an over supply of hotel rooms. Tony also books 7 single rooms and then gets a group discount, he pays up front and then when the ugly dirty smelly bunch (smelly is me, I ran out of deodorant 3 days ago but there is no deodorant for men, when tony explains they want to sell me a male perfume, but, I kept on trying on my own and eventually, after doing the international sign for deodorant (thew one where you lift your arm and place your other arm close to it and then make a Psssst sound,) the one lady sold me an apple scented roll-on that was probably a copy of a copy as it works like apple juice under the arm pit, lekker man lekker.

Then last night after the meal some ran for the toilet, one thought he can speak Chinese and Peens was solving all the worlds problems “discussing it” with two girls who just nodded their heads, but the Dog stole one of Peens’s boxes of fireworks and they light it under my room window. Today the dog (I see his e-mail address is Dog@doghouse, so there is more to this mask, I will have to ask him and report back,) went into a Fireworks road and bought more and bigger Fireworks. See photo of our arrival at the hotel and the new fireworks. 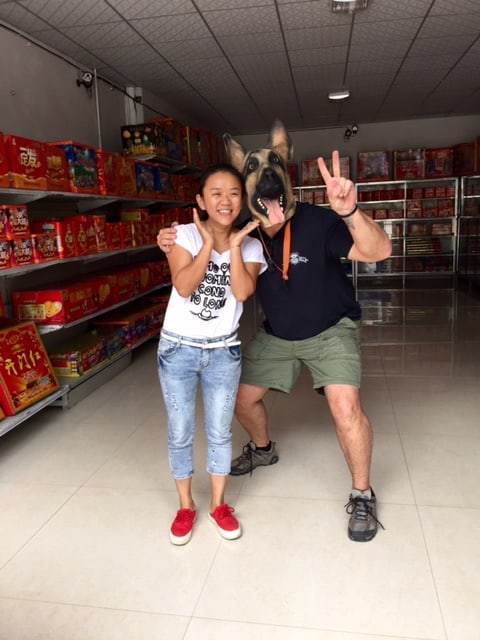 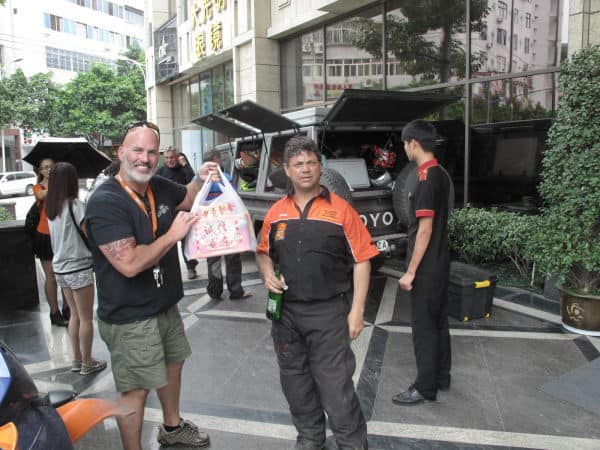 We left in the rain and it remained wet and dangerous and we stayed on the back road. Sometimes we were above the new highway but we remained in the valley next to the river the entire day, sometimes just snaking up a pass and then down the other side again back to the river. The bakkie had to turn around about halfway as there was some truck stuck in the mud at some roadworks but I my concentration level was past my IQ Level when I and 20 scooters squeezed past in the gap between truck and sure-fall-mud-patch.. They took the highway and once again made it to the hotel before us. There is a lot of farming in the valley and it remains very rural, every now and then you pass a very big industrial plant in the distance surrounded by blocks of flats, (many blocks remain vacant, yet they are still building more in spite of knowing their prices are too high???)

Here are some pics of the day. 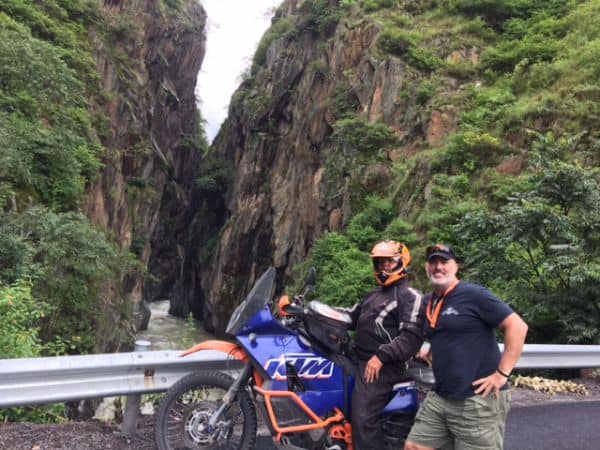 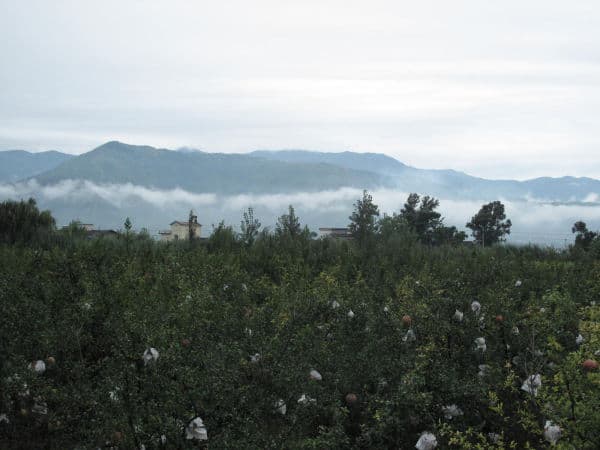 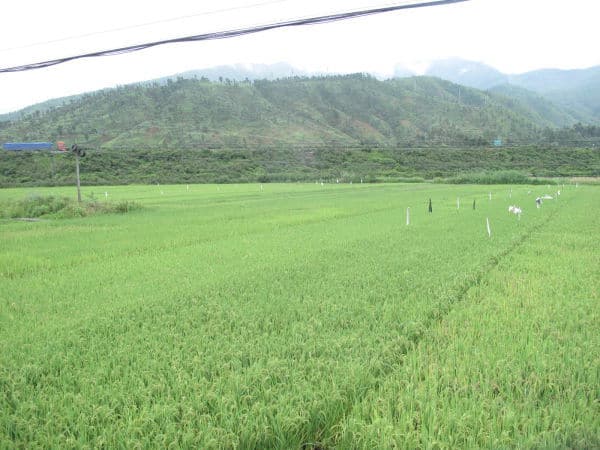 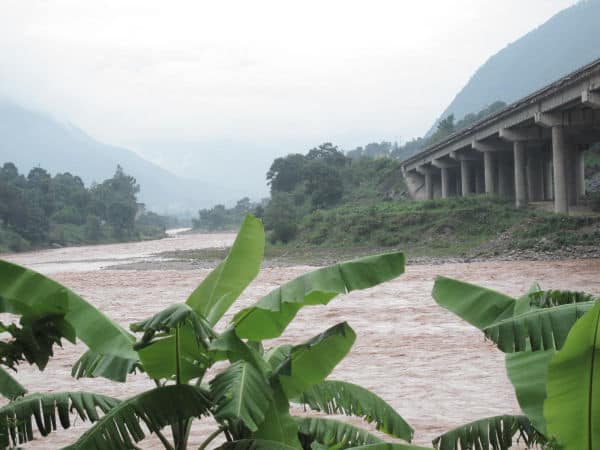 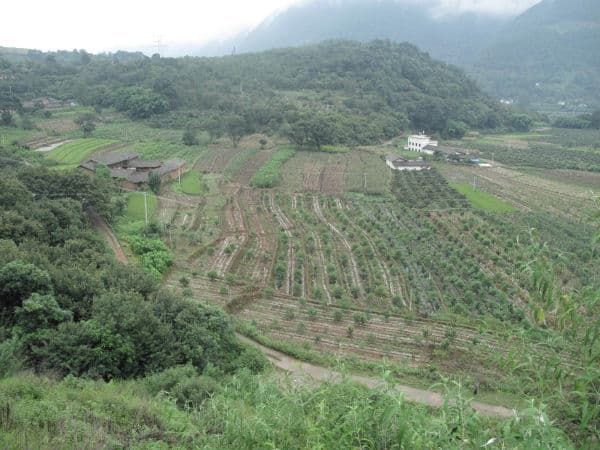 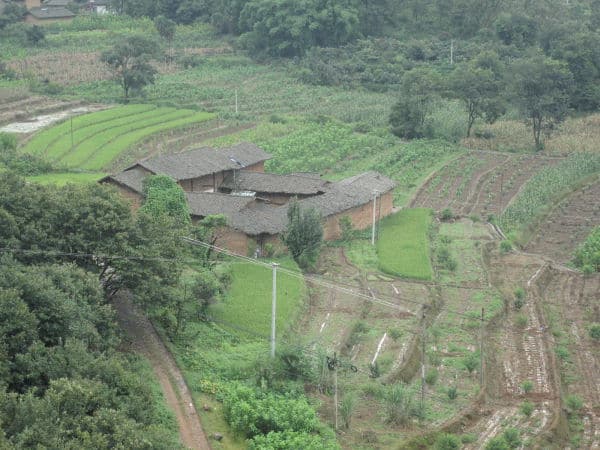 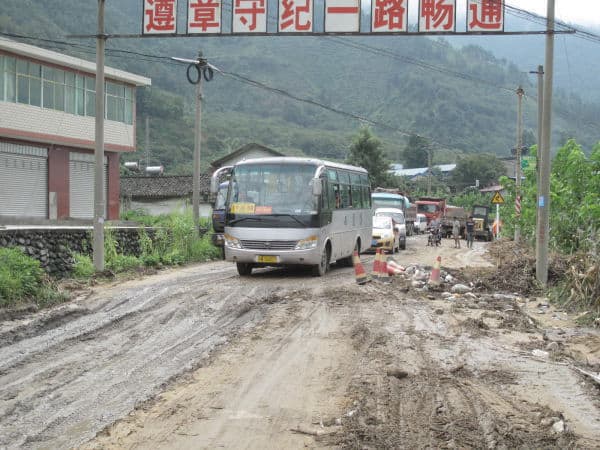 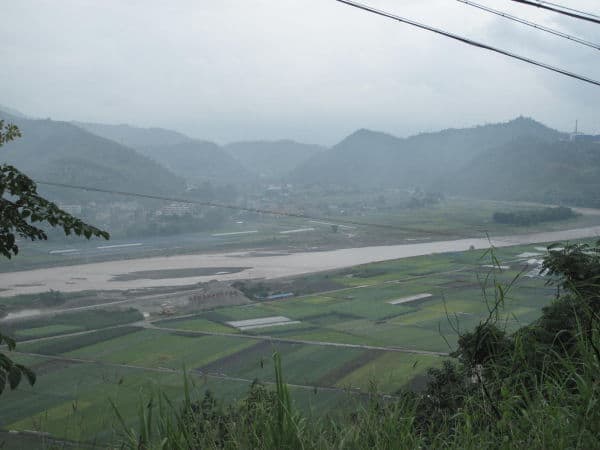 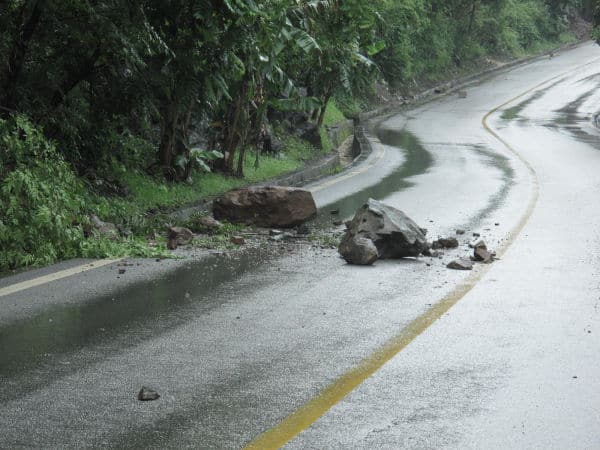 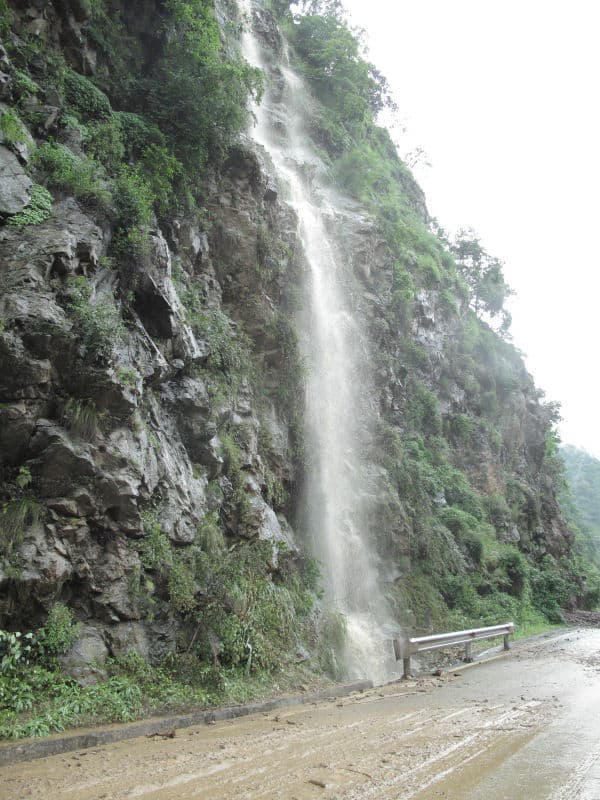 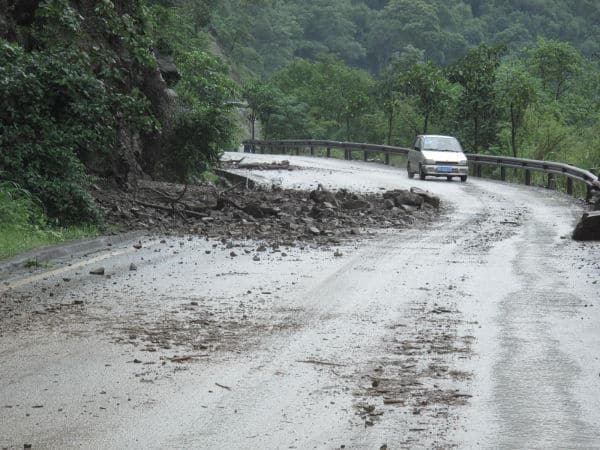 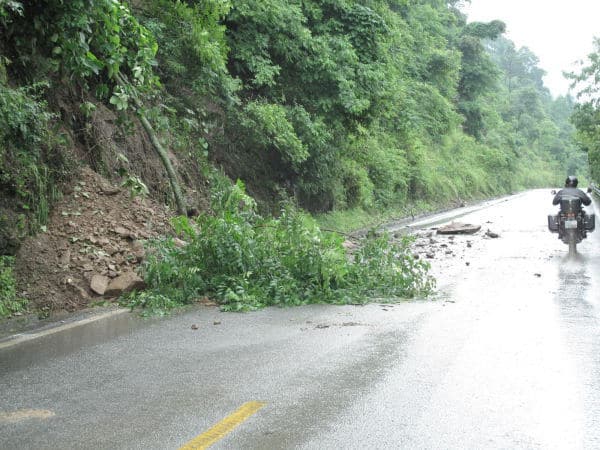 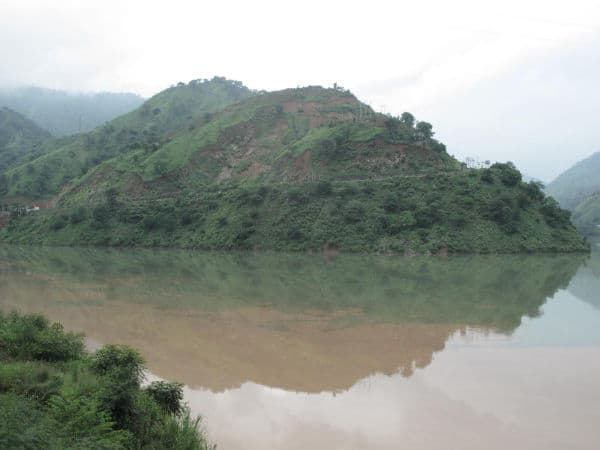 Mudslides and rockfalls seem common on this road as we must have passed at least 30 of these, which is not very nice when you come round a 180 degree bend and there is someone passing the obstacle, IN YOUR LANE !!!, but we soon worked out that you must listen before you turn as you inform the person on the other side by hooting frantically.

At your fruit stop today there was a scale and all of a sudden the fruit is costing double, think they “saw us coming. 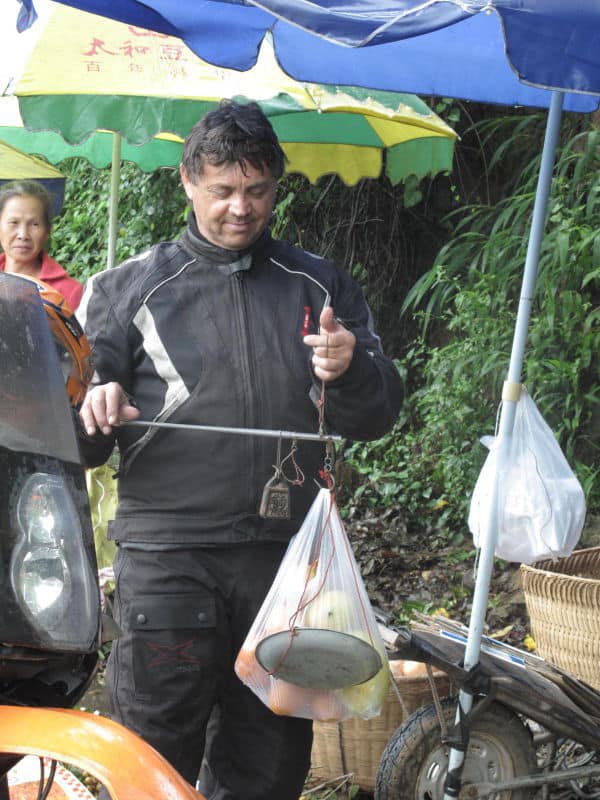 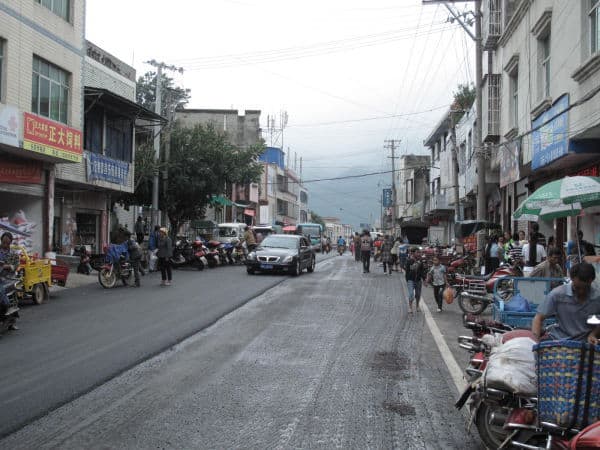 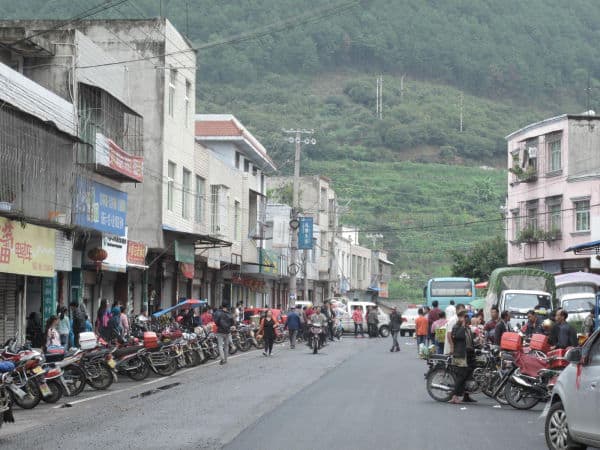 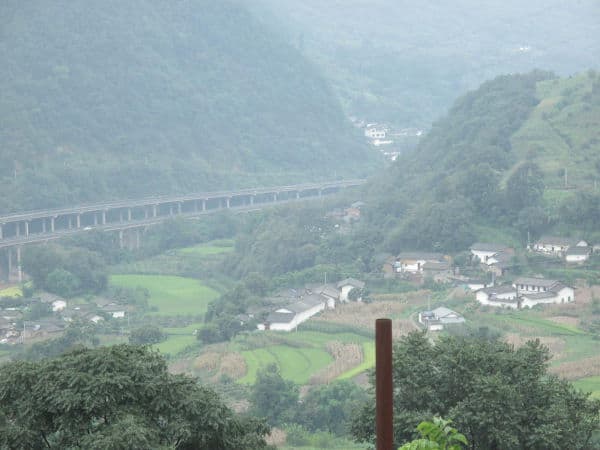 We passed through so many villages, and as you can see from the photos it is chaos.

You all know the saying “In the land of the blind, one eye is Peens,” well Pie and I closed our mouths today as we have voted that ” there can be only one” when the Map hits the fan, so as the bakkie came into town on the highway and went to the hotel, we had to navigate to the hotel as well, so Peens took Rockies Reading glasses, switched on this I-Pad and phone (both useless for navigating as the screen gets hot in the sun and then becomes blank, but as it was raining a few minutes before we were in high spirits. between three tools he will get us home with ease. Well Murphy joined us soon after that and the sun broke through the clouds and then the road was closed and the police were asked for directions, which was given in Chinese, but Peens must have had a lesson in Chines last night as we eventually followed him in. 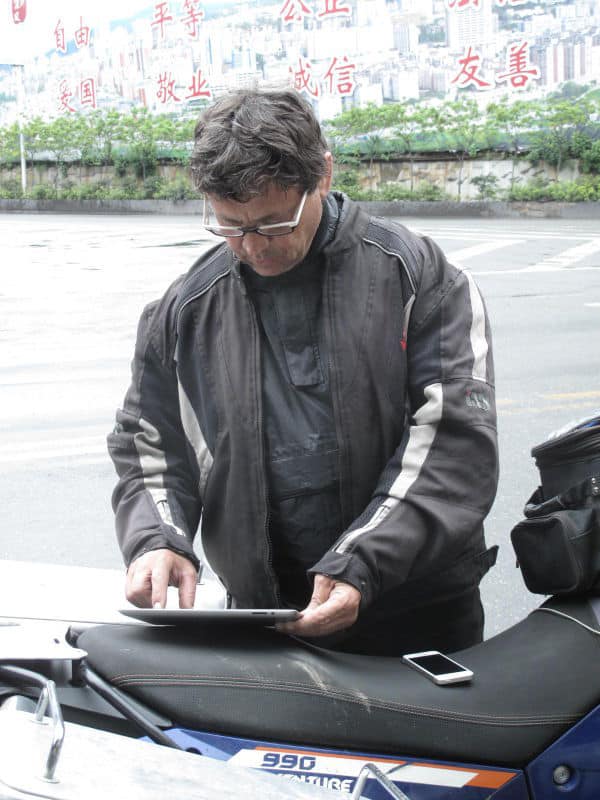 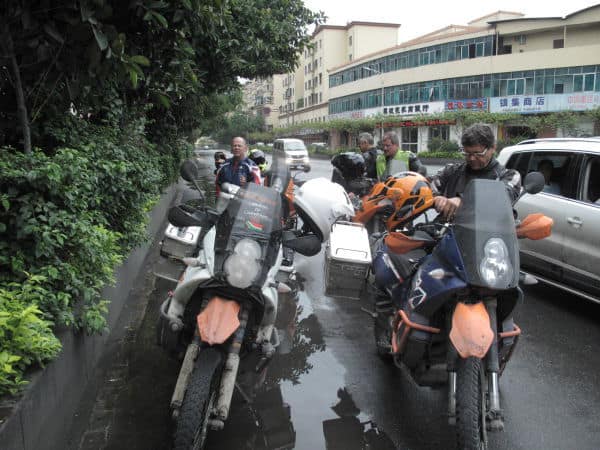 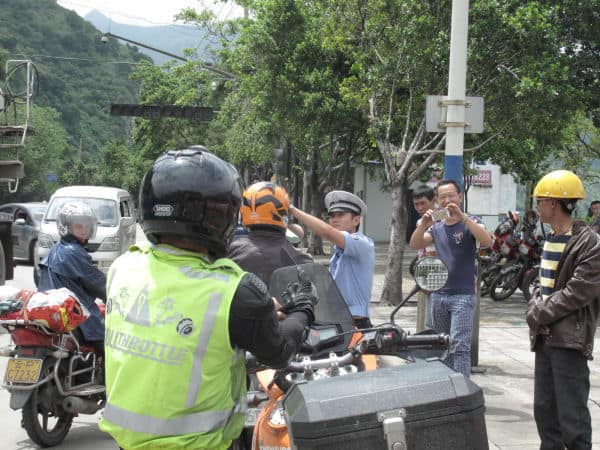