Day 206 Wednesday 10th of May Murfreesburo to Nashville 38km

Last night we went for a Braai (Bar B Q) at Chris and Stefanie’s house in a suburb outside of the City situated on a river. Once again (as when we I visited my cousin) I was surprised to see so many animals visiting the garden, (my cousin had Deer and even a Fox) but last night I did my best to take a photo of a Possum eating on Chris’s lawn, (remember there are no walls or fences between houses and in some cases a row of plants will show where the boundary’s of the properties are.) Here are some photos of last night. 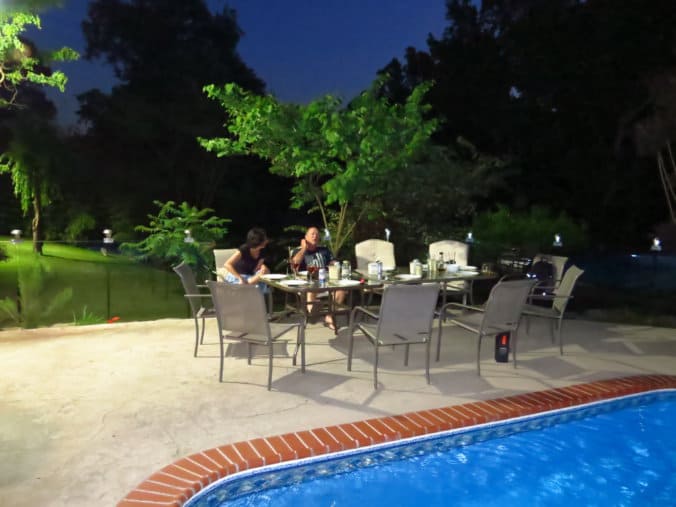 Chris served the best tasting Fillet Steak I have ever tasted.

In this photo below you can see two Raccoons and two Possums. There was also some rabbits and a Skunk, (which did not smell) earlier in the evening. 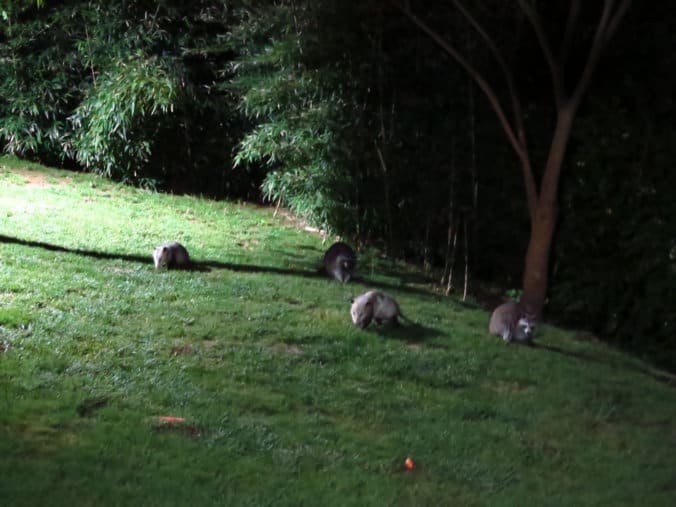 This morning we are re-packing and Pie is trying his best to get all of us to take some Old-Car-Parts back for him inside our “Suitcases” (which we dont really have as the Bags we brought our Riding Gear over from RSA was thrown away,) so it was off to Walmart to buy boxes and bags to pack the 50kg’s worth of old car parts into.

We found storage very easily (1st World country makes the difference,)  and have made arrangements with the KTM dealer to collect the bikes one at a time and service them.

It is still to early to make say what my thoughts are of the USA and its people, I hear the South is very different from the North, so once I have seen the entire country I will give you my thoughts, so the jury ids still out, but I cant just say that there are several things I really like so far, I see a very proud nation, (even though there are two very distinct and different political views) who flies their countries flag almost at every house, business address etc. on every motorbike, and I find that there is no lawlessness, everyone obeys the law, (notone day did I see someone change lanes without indicating, or not stopping at a red light, riding a bike in this country is very safe,) the people of the USA have patience, always friendly and things work here, from the Post Office to the traffic lights, the Police are doing a fine job and it took a while to get use to a place where there is very little crime and that one can leave your bike un-attended, with all your valuables, cameras and riding gear and nothing will be stolen. Although anyone can see that we are over 21, we often had to show our ID’s to order a beer. They are truly a Great Nation and I am honestly jealous, so far.

There is no “in your face” poverty, only saw two beggars the entire trip, the lower earners don’t live in fancy houses but so far I have seen many Trailer Parks filled with many ‘Portable or movable houses” and large “caravans” but outside each of these there were large trucks and boats, so far we have not seen the “Trailer Trash” we see in the movies, may see this in other places. Credit is cheap, if you buy a house the bank’s interest is under 2%, on Cars it starts going to around 4% and if you are a biker with bad credit record you might pay interest rate of 20%.

This trip was also a little Wake-Up call for me as I realised “I am getting old” and that I might even run out of traveling time before I have been through all 6 continents. Three out of the 7 of us qualified for Pensioners Discount at a few Dinners and Museums!!!!!!! How scary is that !!! (Not that I am traveling with suck “old folk” but that it shows time is marching on at great speed.

There are a few things that would bother me if I was a USA citizen, I see plenty of gun shops and even rode past a Pawn Shop\Gun & Ammunition Shop, so you could pawn your fridge and walk out with a new gun, all in a matter of minutes, and the guns that are on sale are proper Automatic weapons. I noticed a sign on one house in the shape of a gun with the words “We Dont Phone 911”, I have noticed a few  other issues, mostly in Tennessee, there is a drug problem and yesterday Dog told me that we rode through a town where the local bike gang had a “Closed to Public” pub and that there was a lot of Meth Cooking on the farms in the area and it is distributed by the bikers, so now I understand why some restaurants and Dinners has signs that says “Bikers Welcome”, and last night I took my computer with me to the braai as I was nervous about a few young Crack-Kids hanging around our Motel for the free Wi-Fi.

It is not easy to always eat healthy and there is such a large Take-Away industry, but one can still get your Fried Green Tomatoes or Salad Bar. Things are very commercial here, but it works, it provides jobs and I can understand why so many South Africans has moved here (and continue to move here.)

But it was fascinating for me to see how each State is almost run as a separate country, with different laws and rules, and Tax Rates etc. from the state next to it. I must say I loved the States where one could ride without your helmet, (no mom I kept mine on in the day,) you pass hundreds of bikes on the road in the day and non wear helmets. But at night when one rides to the local Dinner down the road it is just the best feeling to ride in the cool evening without a helmet, with your hair (for those lucky enough to still have any) blowing in the wind.

On the previous trips we had a Back-Up Vehicle behind us (to take us to hospital if needed and to carry the spares for the bikes,) this time we had no vehicle, so everything you want and need is carried on the bike, and on many occasions I wanted to buy myself or my family a small gift or T-Shirt, and then one realize that there is no space, where will you put it, what can you throw inside the Rubbish Bin to make space?

We also had to stick together on previous trips and travel as a unit, this time we could split-up and Dog and Pie could break away and do their own thing, I might do so in future if the route is planned too much along the Route De Studebaker, (Pie tells me he is finding many “un-molested” cars here and cant pass on the opportunity to go and look-see.)

We will return in September and hope to do at least a piece of Canada, but Tex and Pie (and Dog, who was in charge of yesterdays route and took us up the “W”  (I think it stands for Wagon Trail) which is a road they used to take the cannons up the mountain) and surprised me with his navigating skills of Google Maps and manged to keep us on the back roads for the whole day. So until you hear more from me in September, I hope you are all Blessed Out Of Your Socks !!