Before Breakfast the Spares-man delivered a car battery and very thin copper wire which looked like it come with the compliments from the building-site next to his shop. A plan was made: 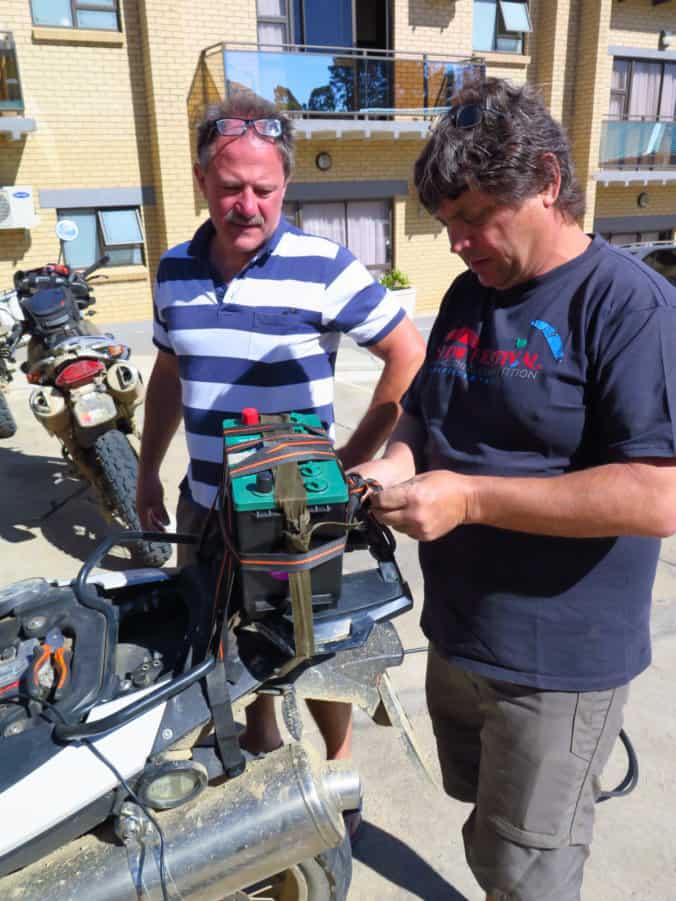 The battery was strapped onto the back of the bike and the copper wires were run under the seat, problem solved we thought, but Murphy had a few other plan with us. At first we thought that the battery was flat as the bike would not start, we used McGyver and started the bike and set off, the bike did not cut out again but refused to start on its own. During the day the cables were shortened and this solved the problem for a while, but by the time we reached the gravel road (which was the last 25% of the days ride) the BMW was back to cutting out again. We discovered that the bike’s alternator was not charging the car battery due to some fancy electronics, and that for a bike without any fuses??? We are told that if the cables were thicker this plan would have worked.

We had a great ride winding through the mountains and lots of kids were all returning from the closest mill or others looking after their families animals. 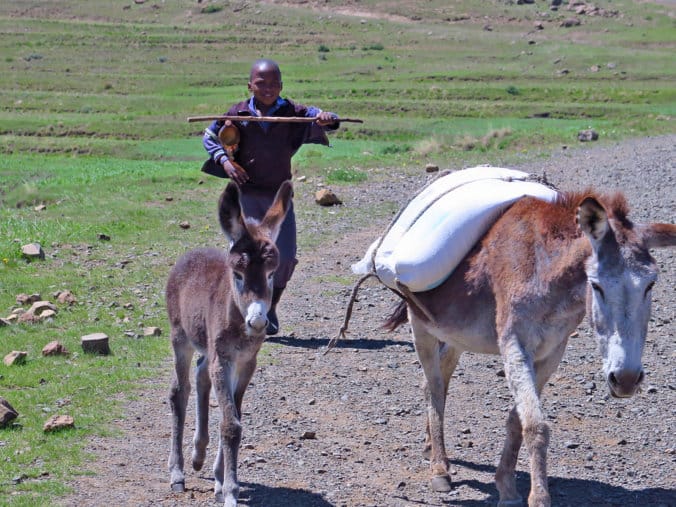 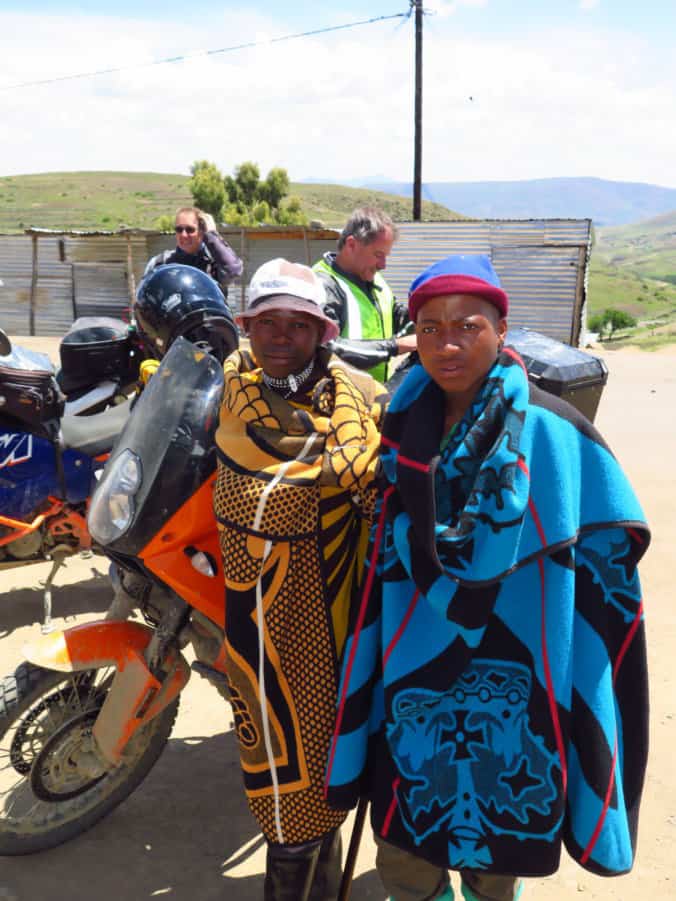 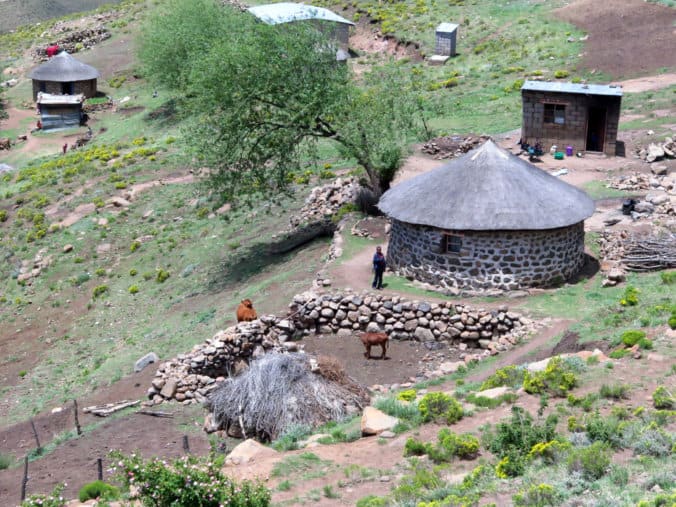 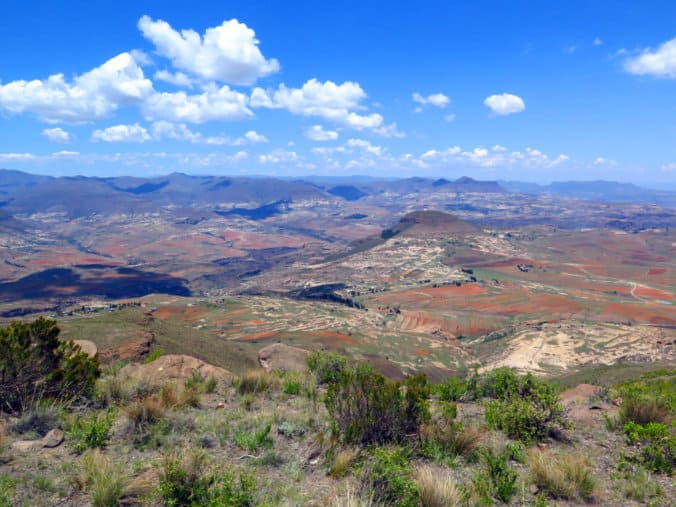 We stopped a few times to buy cool-drinks and Peens even tried to ride a pony, but that ended in pain when the Pony head-butted him. 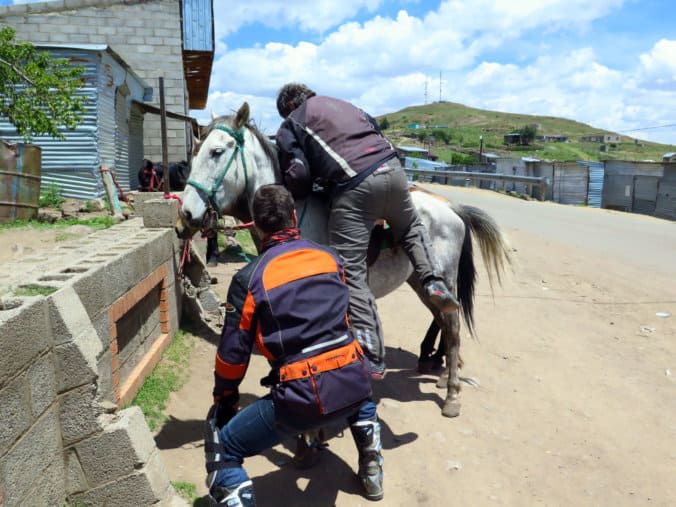 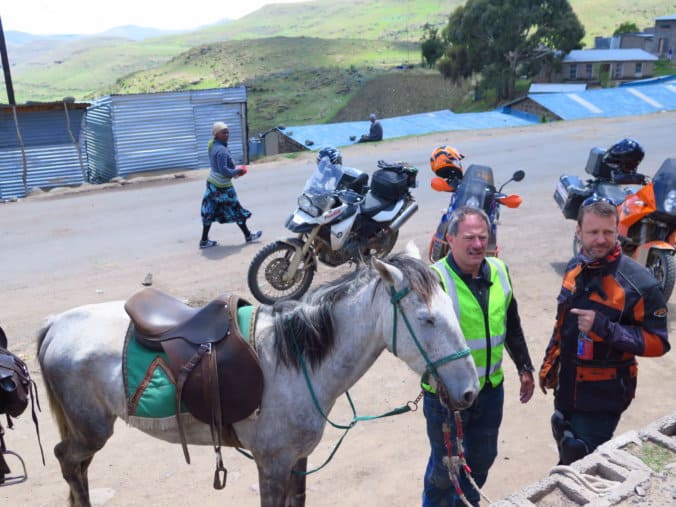 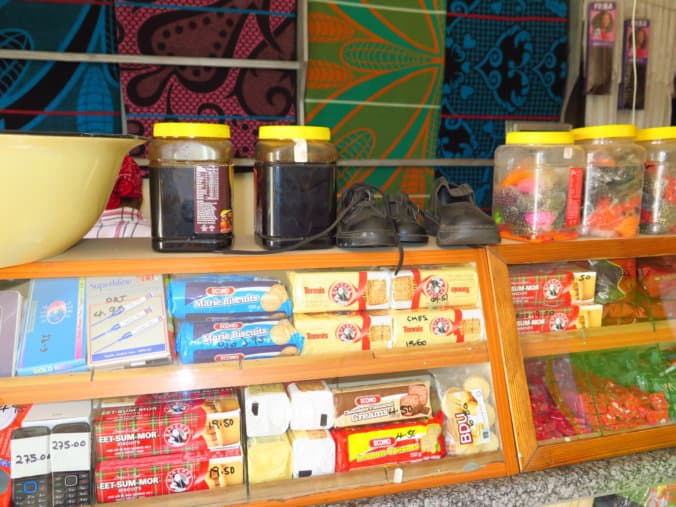 The local stores sells everything a local villager might need, mostly gumboots, blankets and balaclavas and biscuits, but even a selection of school shoes.

The landscape of Lesotho is something special, it is also very sparsely populated (the majority of the 2 million population stays near the capital on the Eastern side of the country which has less mountains,) and it is almost a “lonely” feeling when riding through Lesotho as the bike behind you and the bike in front of you is far away due to leaving a  large-dust-gap between the riders.  Slowly we put the mountains behind us and entered the flatter part of Lesotho. 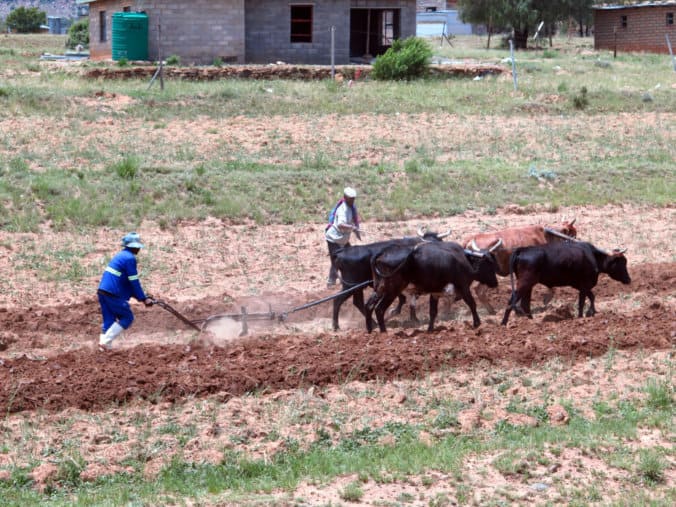 But this did not last long, after lunch we were once again in the mountains. 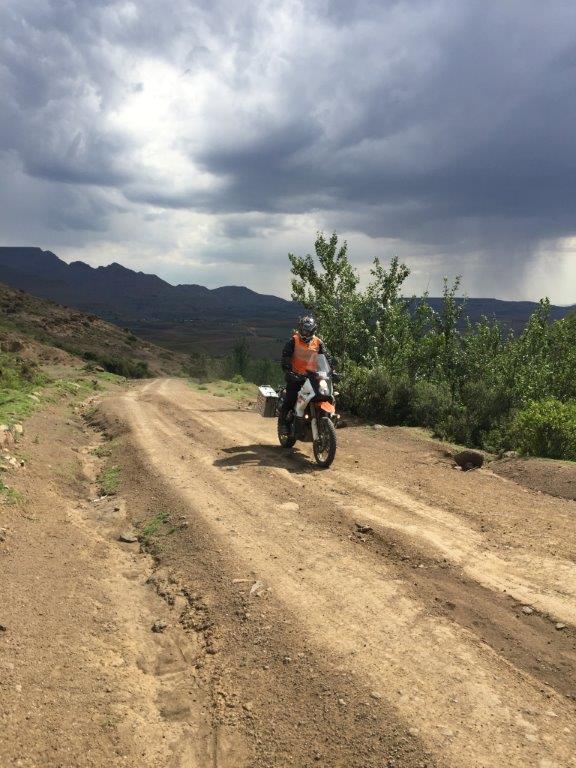 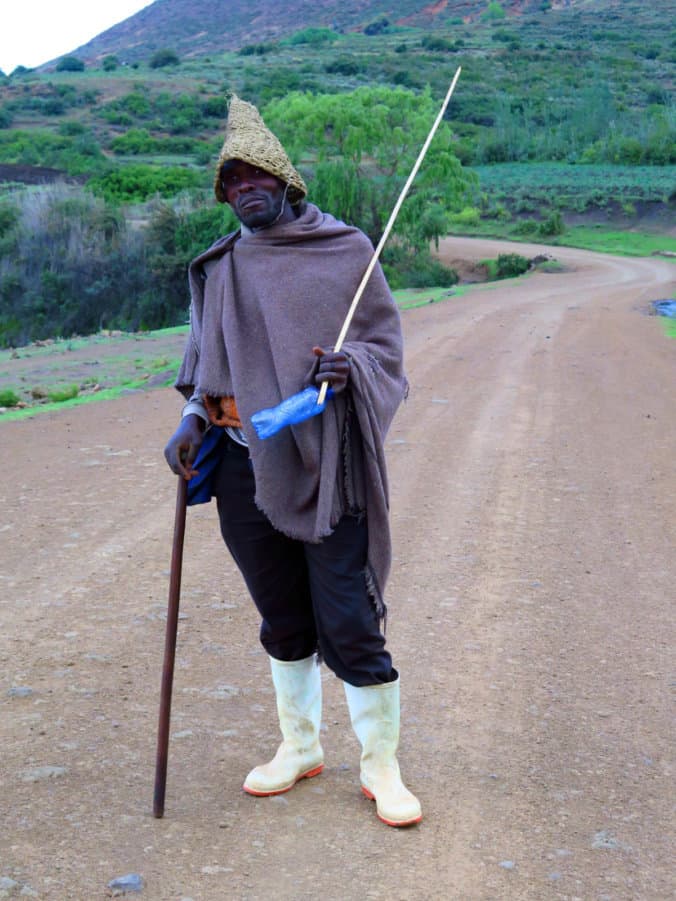 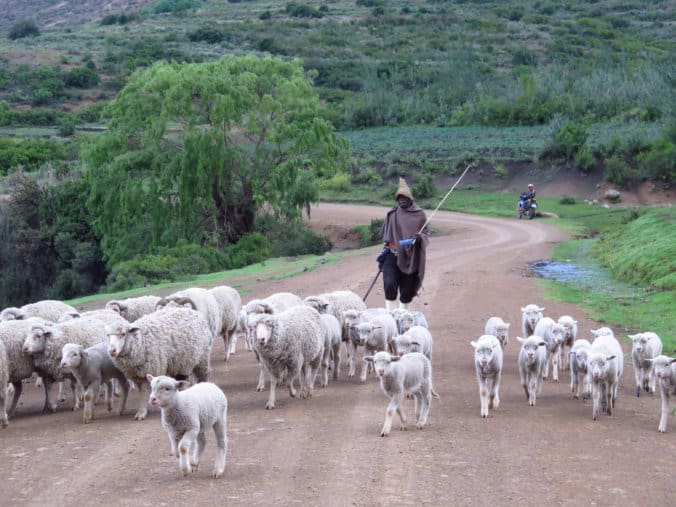 Note how many baby lambs in the photo above.

We found a bus-stop in a village and ate some lunch under it waiting for the thunderstorm to pass. 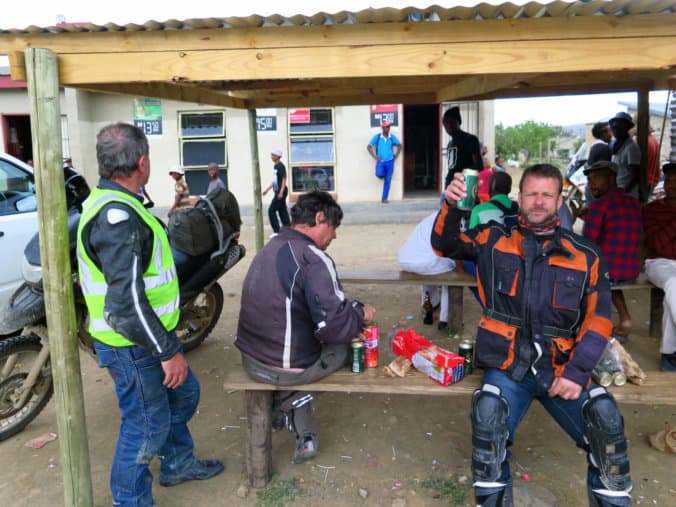 I realized that I had made a mistake by not stop for fuel before turning onto the gravel road, I knew there was no fuel at Malealea and that the KTM’s would not make it to a fuel station the next day. But Murphy was per-occupied with Charles and his BMW playing-up on the gravel and we stumbled onto a “petrol-station” (fuel sold in 2lt cool drink bottles at a 50% mark-up compared to a proper fuel station)  in the last village of the days ride. 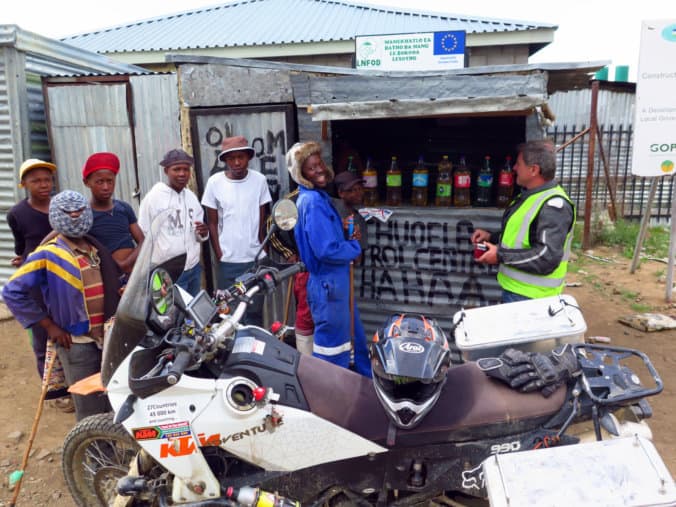 Note above on the left how the small boy wears his balaclava. 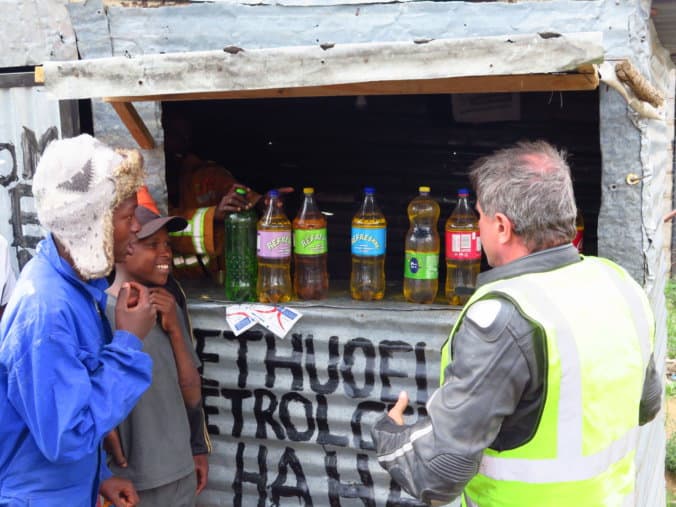 We arrived at Malealea Lodge, famous internationally for its Pony Trekking, and once again we were the only South Africans between 30 other tourists, mainly from Germany. Set-menu Dinner was served at 19h00 and by 21h00 we went to sleep in our Basotho Huts, but with a toilet and shower attached to the hut,  (the power gets switched-off  at 22h00) and Murphy had one more surprise for me, I discovered while standing in the shower that the water was not getting hot as the gas-geyser’s pilot-light was not burning and after several attempts to light it myself I settled for a cold shower.