We started the day thinking it was going to be a bad days riding as we had to leave the Washington D.C. Area, enter into the State of Maryland, then ride through a section of the state of Delaware, a very small state and into the State of New Jersey, and we had to also get past the Metropolitan area of Philadelphia,  so when we took the Map Book this morning we thought it was going to be a High-way day, but then, after a few cups of coffee from a Paper cup at Breakfast, our brains kicked in and we saw a small little road on the Maryland side of the bay, which we then saw ran all the way up the coast to almost at Philadelphia and then continued up the coast thereafter. So to get us on the small road we set out GPS’s to the town of Centreville, only about 50km away, seemed easy enough, but we anticipated a ferry crossing as there was a very wide section of water to cross. But then it went all wrong for me, who was leading the way as my GPS directed me onto a split in the highway and the rest of the group saw my error and took the other road in the split, I then looked properly at my GPS and saw I only had another 263km to ride to get to the town only 50km away. So that meant I had some problem with my settings, some roads were being avoided by Suzy, the GPS, and I suspected it was Ferries, but when I checked Ferries was not marked as something Suzy had to avoid, but by then there was another fork in the highway and I took it thinking it was an offramp, only to be sent further away from the direction and road I needed to take. Long story short : I eventually rode to the Ferry Bay Crossing without Suzy only to discover when I arrived at the water that there was no ferry but an 8km long bridge with a toll booth, and that Suzy’s settings was avoiding Toll Roads, not ferries. Eventually I caught up with they guys having a coffee in the Historical town of Chestertown. What a lovely day’s ride it turend out to be in spite of the problem for meat the begining. The road was all along a scenic road with several historical old towns along the way, with a wide cycle lane and many people cycling in the 26 degree warm weather. The route was through flat farmlands with Soya Bean and Corn Fields situated between green grass, horses and cows and Pumpkins at every Farm Stalls along the road, (I even saw Pumpkin flavoured Lips-Balm being sold.) 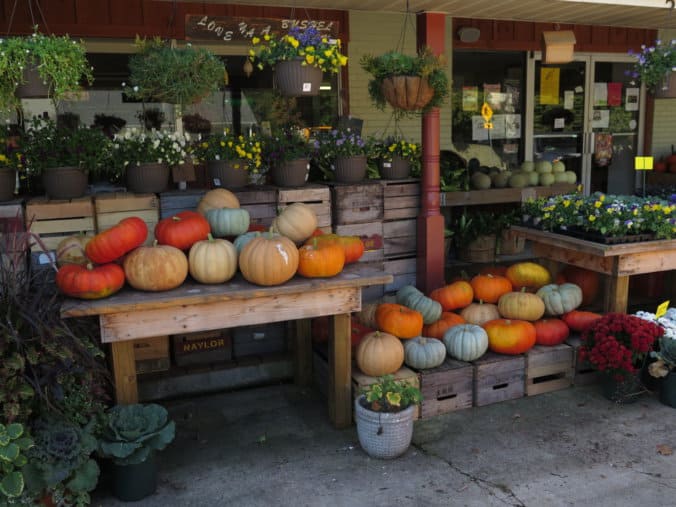 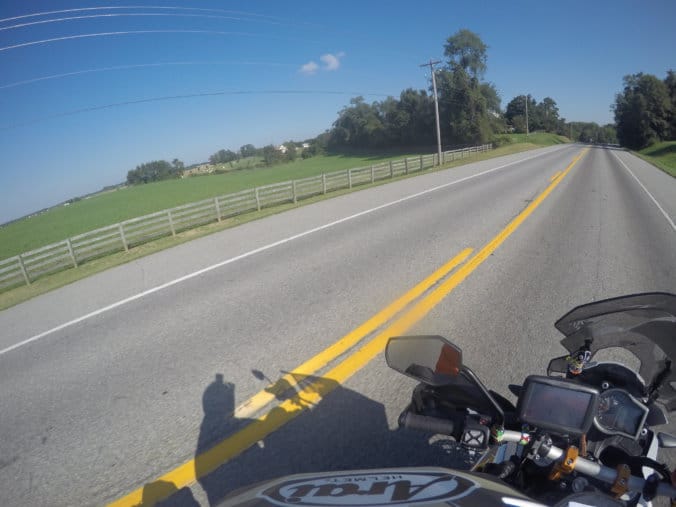 There were many water crossings where the fishermen attracted Peens’s attention. 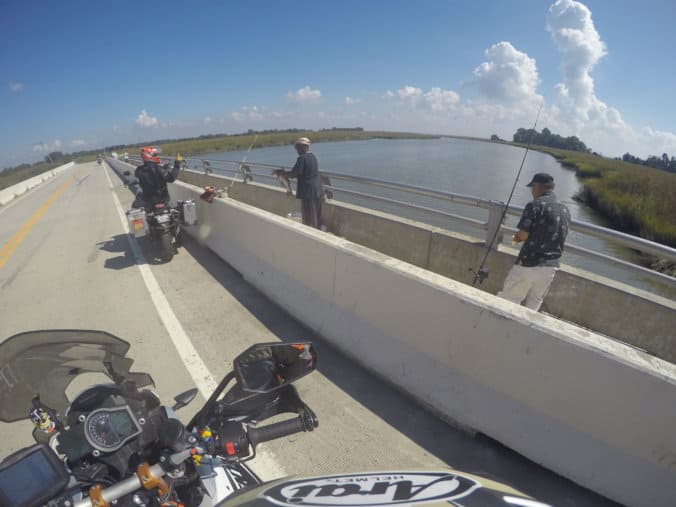 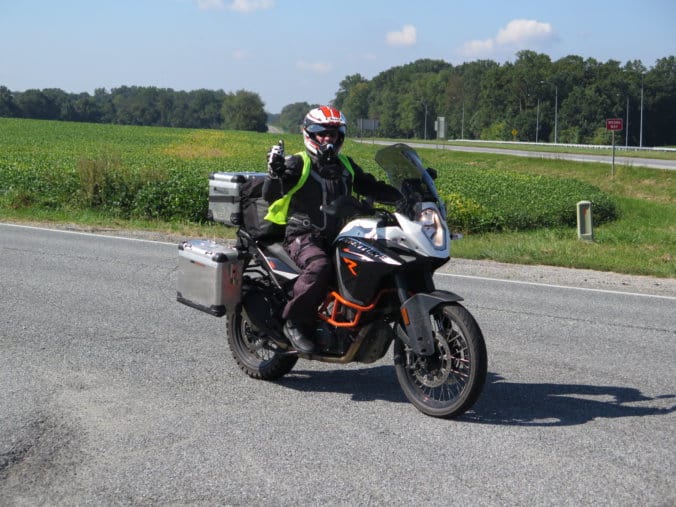 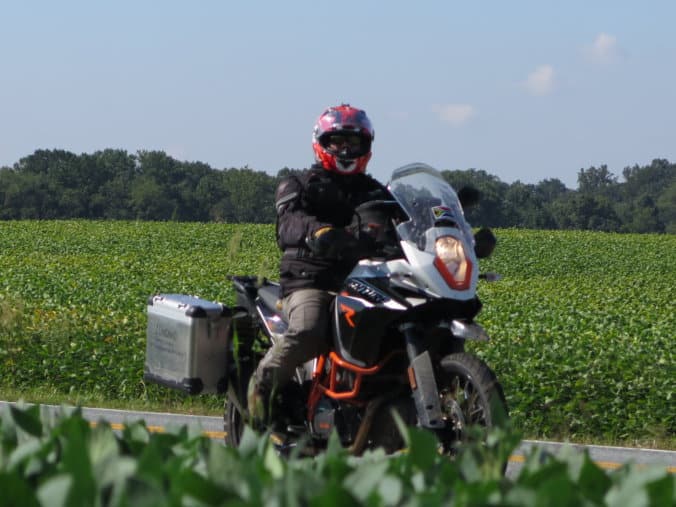 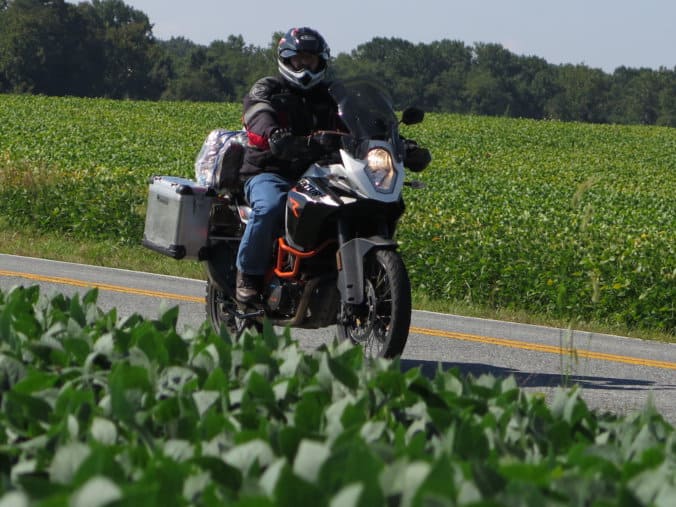 The route took us past places like Galina, Odessa and Beachview until we got to Delaware City where there was a small cycle race and a festive atmosphere in this small little town where the British Car Club had driven to from Washington for the day to be part of the festivities and exhibit their cars, Pie was in his element and therest of us could just not believe our bad luck to have to look at old cars, again!! 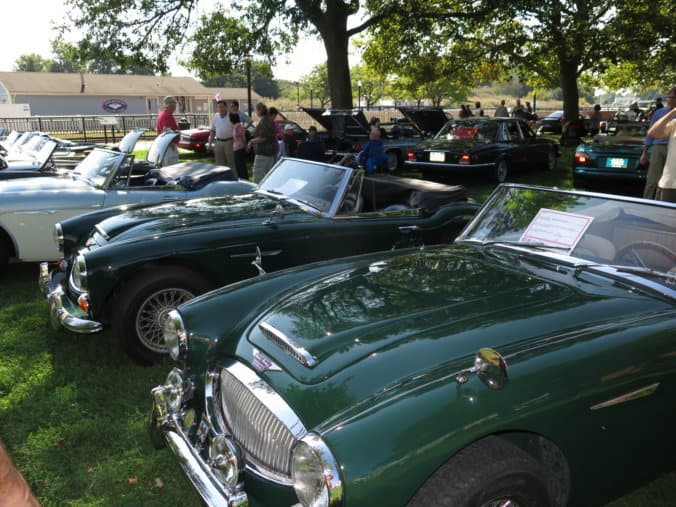 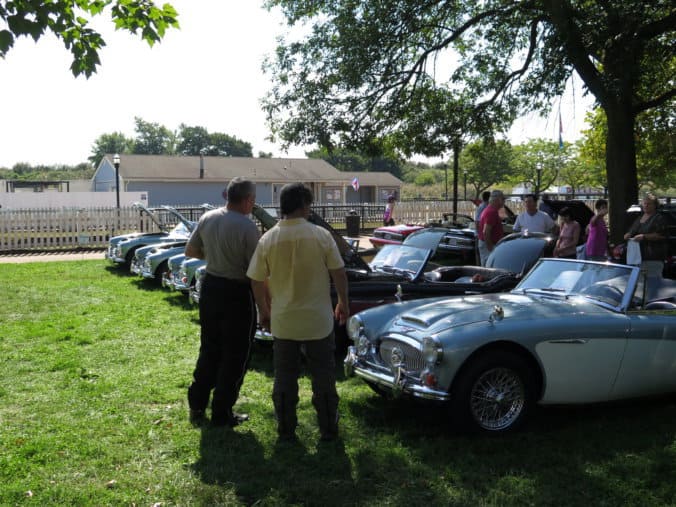 The car below was still in running order as it only looked like a Land Rover and luckily it was an Austin, therefore still running after all these years. 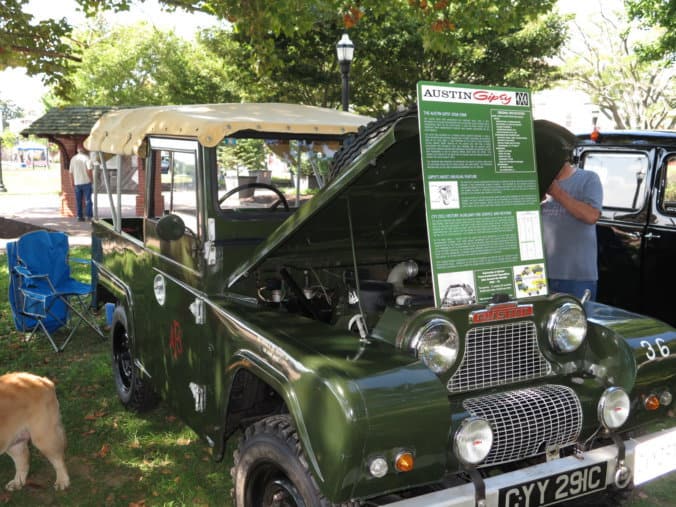 There were local produce on sale as well. 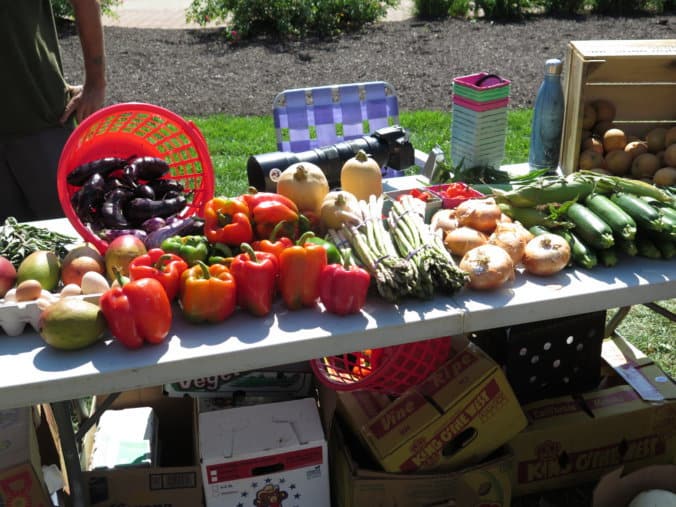 This pub where we had to have a beer is called Lewinskys (like in Monica,) and their address is in Clinton avenue, so their claim to fame is that it is “Lewinsky’s on Clinton” when asked for their address. 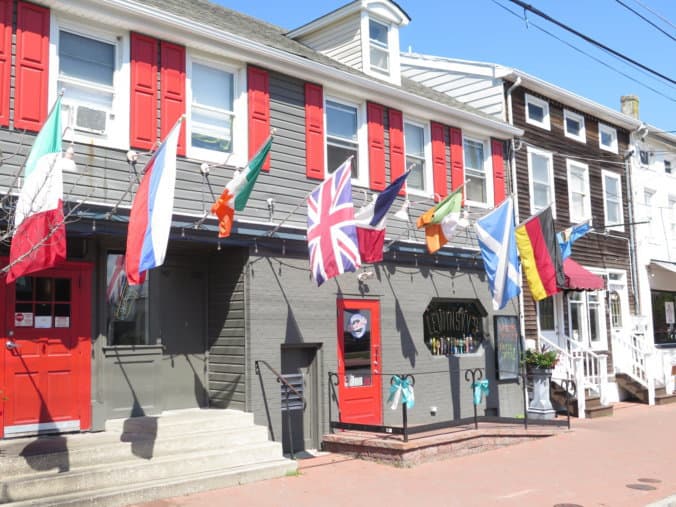 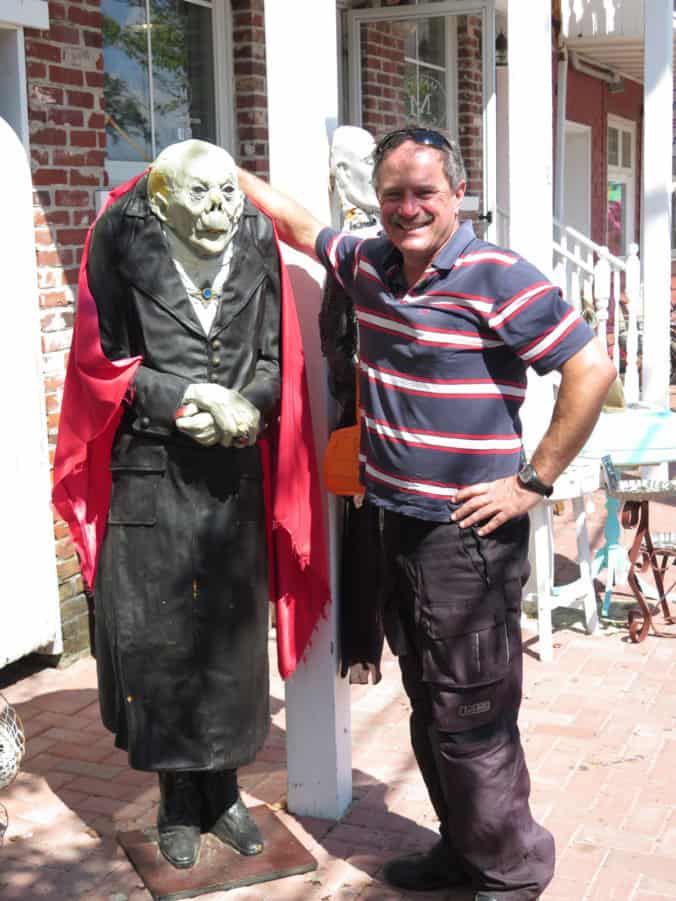 We eventually had to get onto the Turnpike (another name for a highway) and I saw this pet lover who looked like him and his wife and dog went out to buy a new cage for their parrot, which made me miss my parrot Easy and I wondered how my parrot was back home without me. 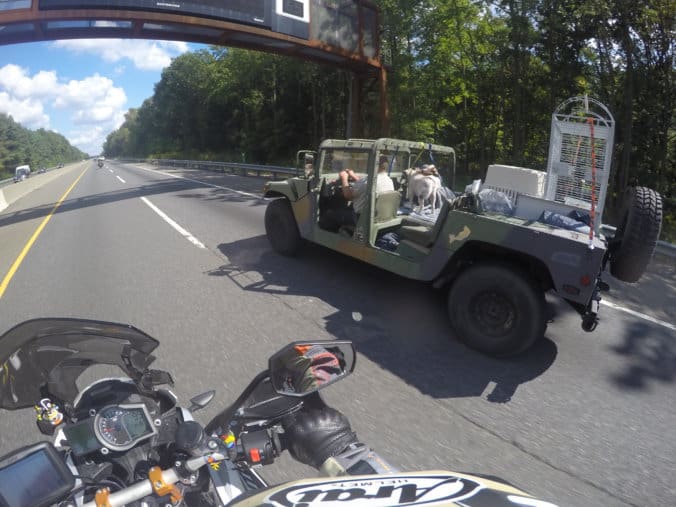 We then his “Jersey Shores” and followed the beach road up the coast past beach houses on the left and a long beach promenade for 20km on the right with the beach and see behind that. We saw several weddings held on what we would call a “Pier” back home, so it was strange seeing a girl walking in her bikini on the Promenade and then a couple in their Suites and Ties and formal dress. 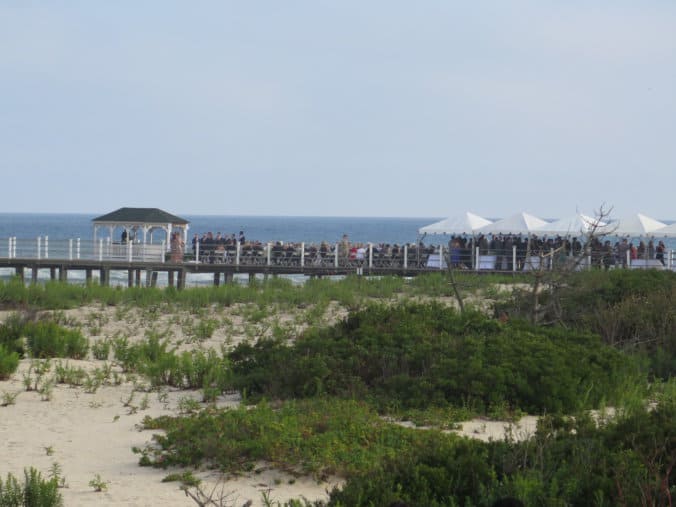 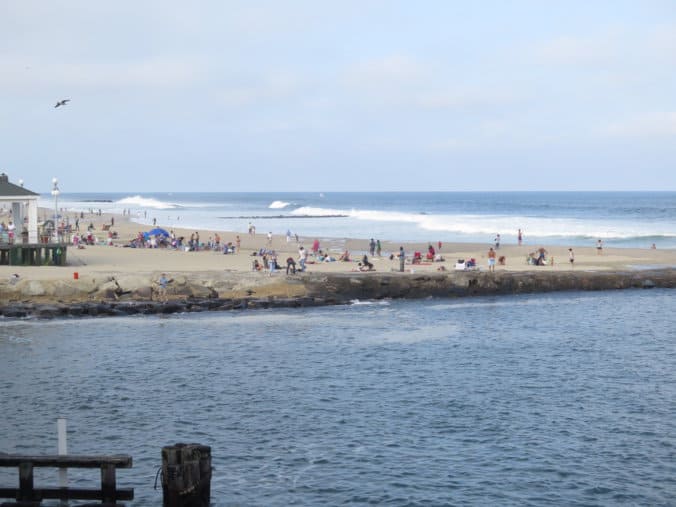 When we arrived we found a restaurant to sit, order a beer and start phoning for Accommodation which was rather difficult as there was a festival in town and because of this “late in the season unseasonable hot weather” many people took a long weekend before the weather changes. 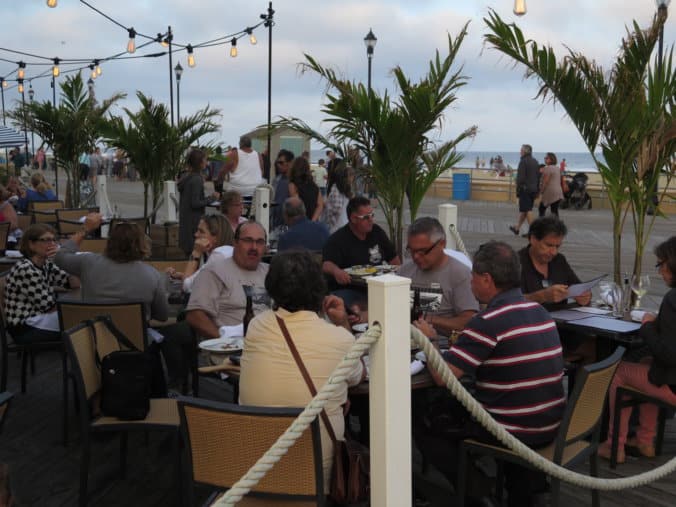 And there is a Boardwalk, as in the song, (……under the boardwalk, down by the seaaaaaee …. I was walking with my baby, just you and me, under the board walk……… ) 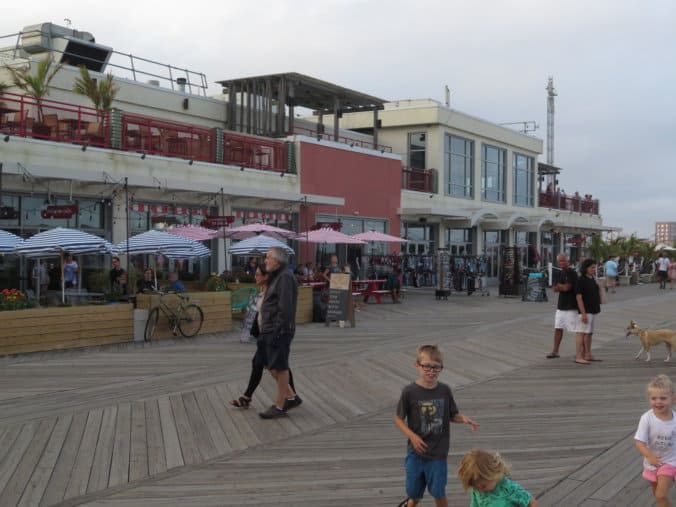 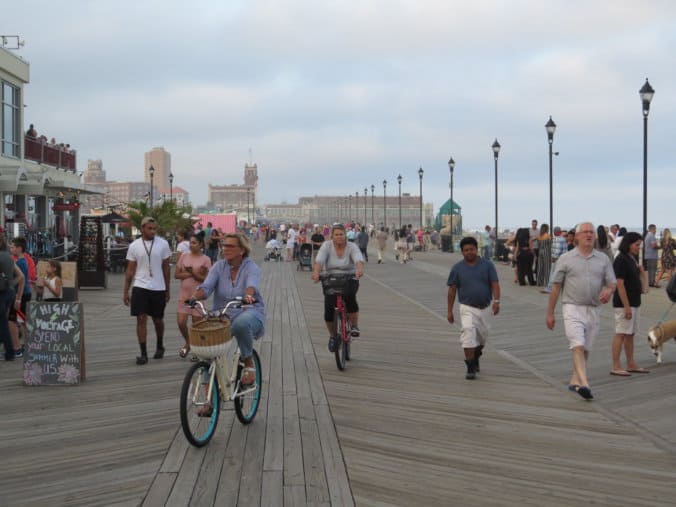 Tomorrow we are leaving at Sparrows Fart (early) as we want to make it onto Time Square in New York City before 8h00 to take some photos of the bikes, then go to Central park, do the Hop-On-Hop-Off-Bus Tour, then go to have lunch with my “Small Cousin” (direct translation for what we call in Afrikaans my “Klein Niggie”) and then still ride out of NYC so we dont get “Captured” by the traffic on Monday morning.