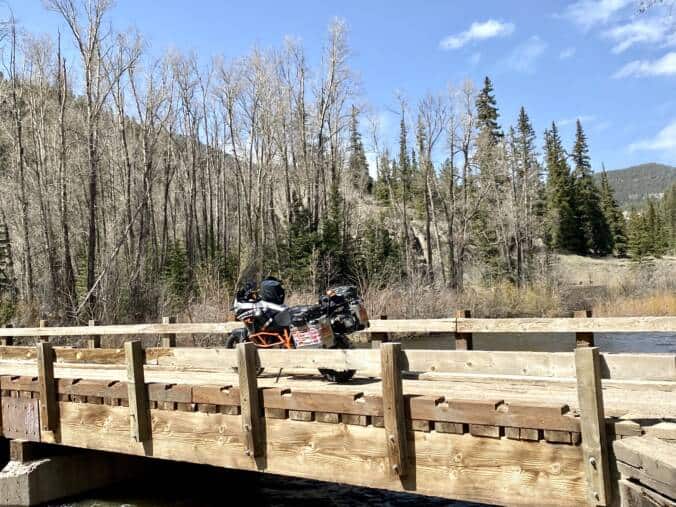 We left this morning at 8h00. I had a terrible night, I hardly slept, I coughed and battled to breath, but worst, I had a fever, and because I sleep with ear-plugs (because Peens has Master Snorer Status,) I could hear my own heart racing, that freaked me out and I just could not sleep. Then I stood up and searched for our Medical Aid Kit, I hoped there was something for the flu and maybe a Rennies (Anti-Acid) as the gourmet lunch at the Fuel Station just would not stop burning. Sadly the Medical Kit has been depleted and it needs to be re-stocked before the next Leg.

But the KTM – Train pulled off and I had no other choice but to be on it. I told the guys I was not doing any Gravel Road today as I felt weak.

Our first stop was at a place where the four corners of 4 states meet, Utah, Arizona, New Mexico and Colorado: 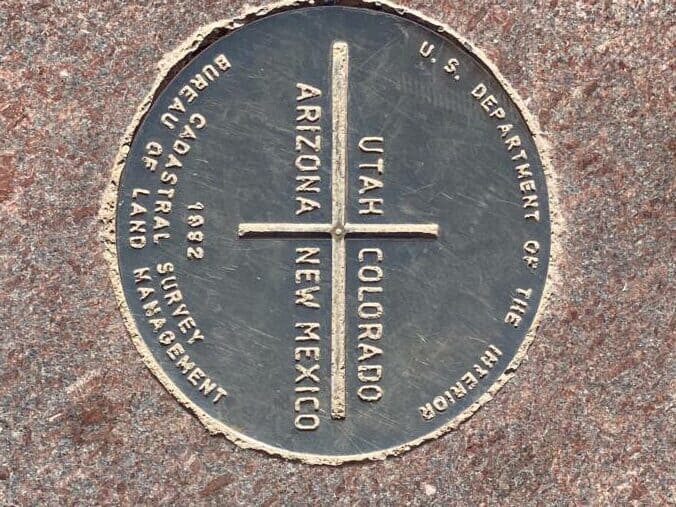 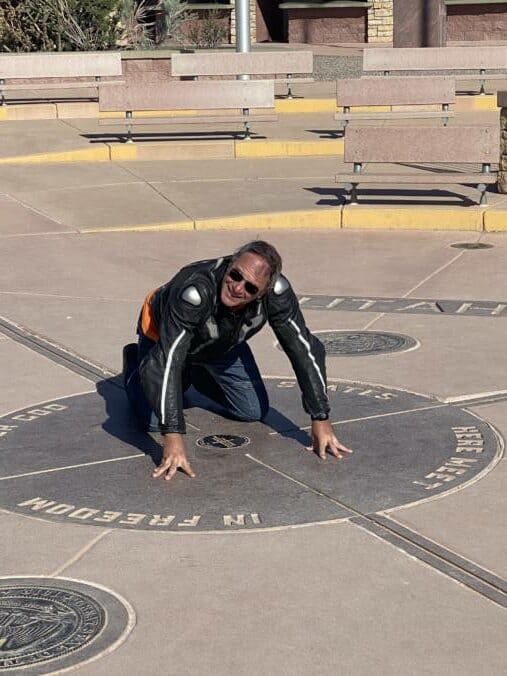 A leg and arm each in a different State. 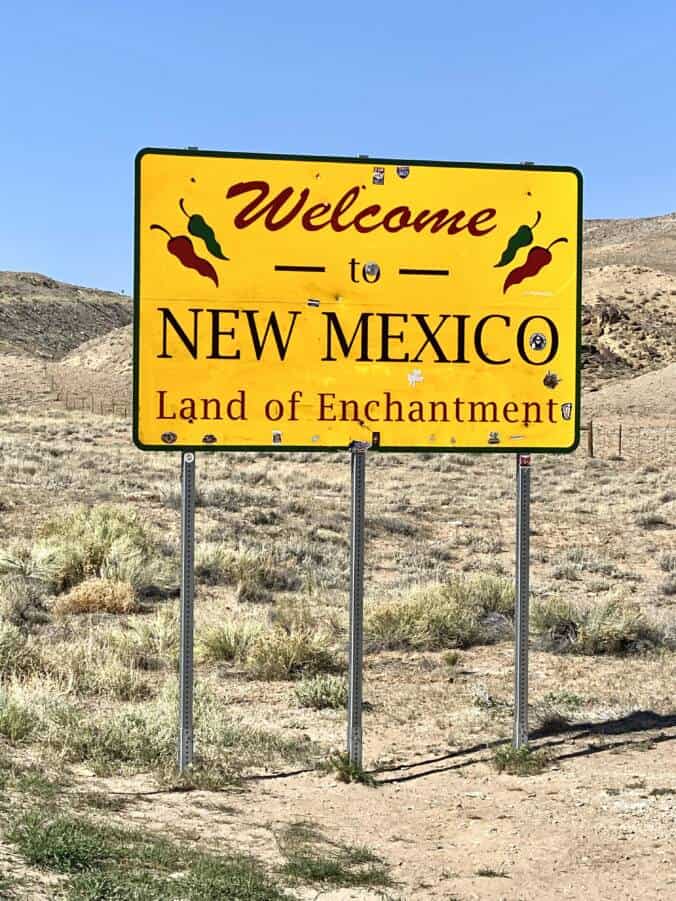 Note the double back-wheel for the towing vehicles. 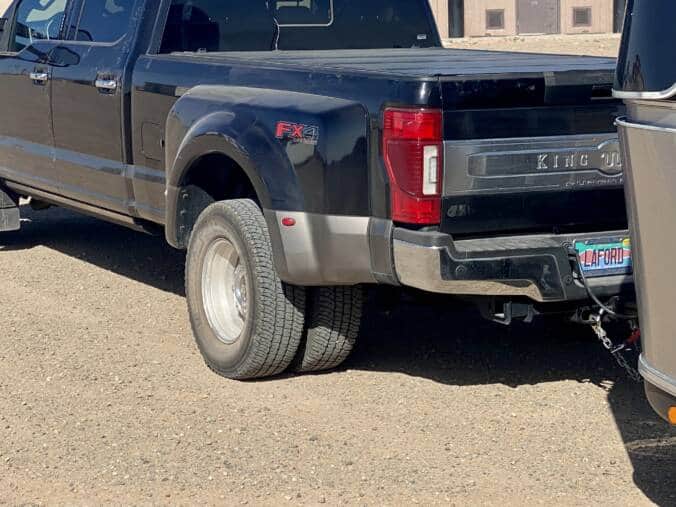 And a retro Caravan: 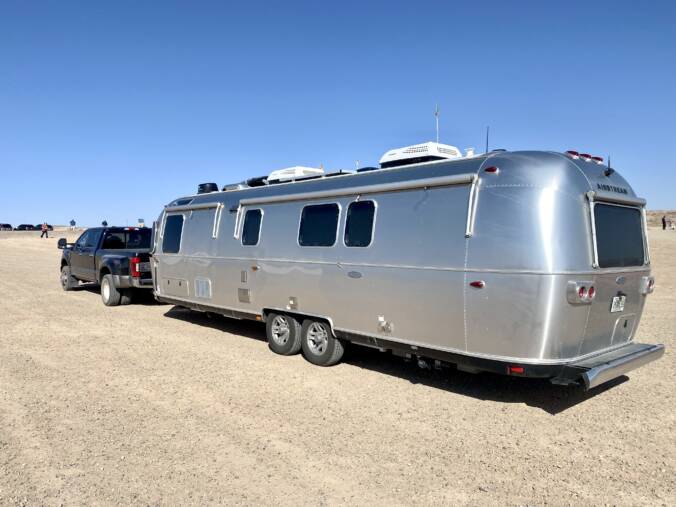 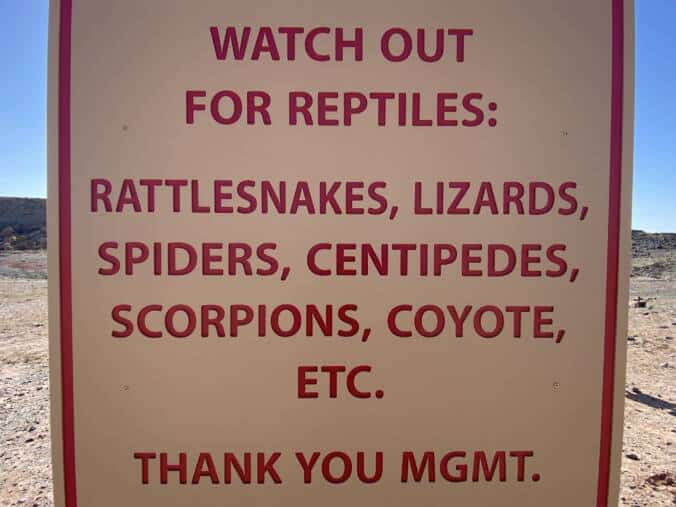 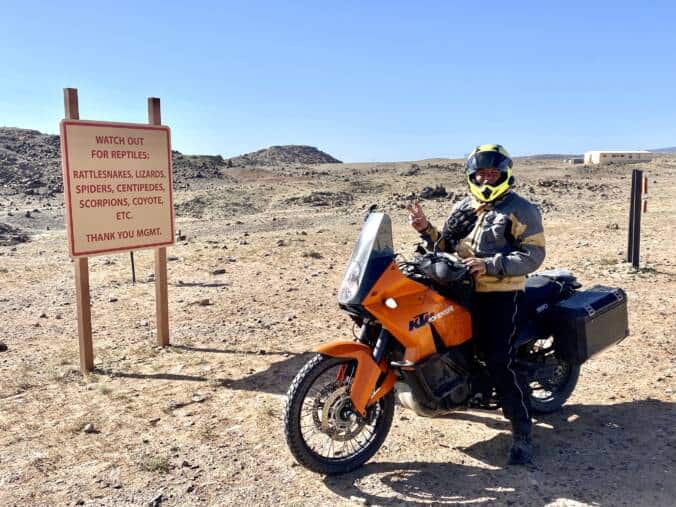 We were in the desert again and the landscape became drier and drier as we rode. Luckily the roads were now straight as I have had more than enough of the Twisty-Stuff for now. 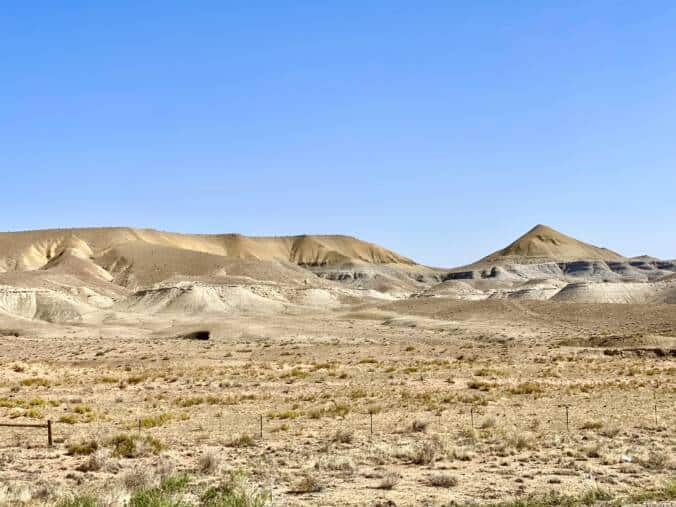 Sadly our Brunch was once again eaten at a fuel station. If it was a truck-stop it would have been better as the food at a truck-stop is much better, but no trucks are allowed in these tourist areas. 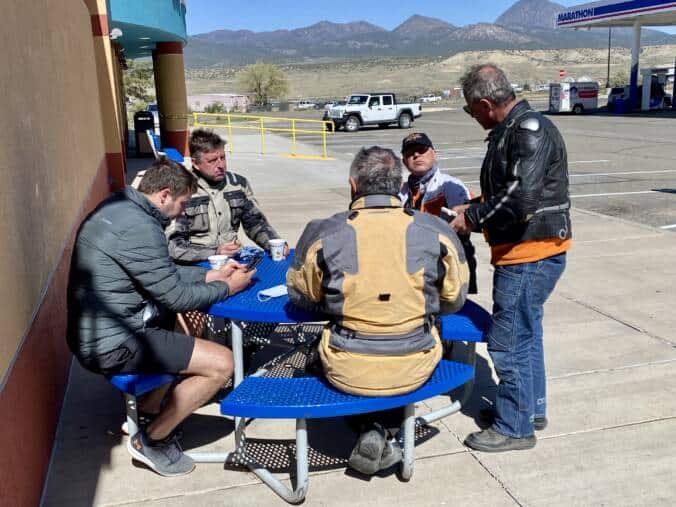 But then we crossed into Colorado and things started to change: 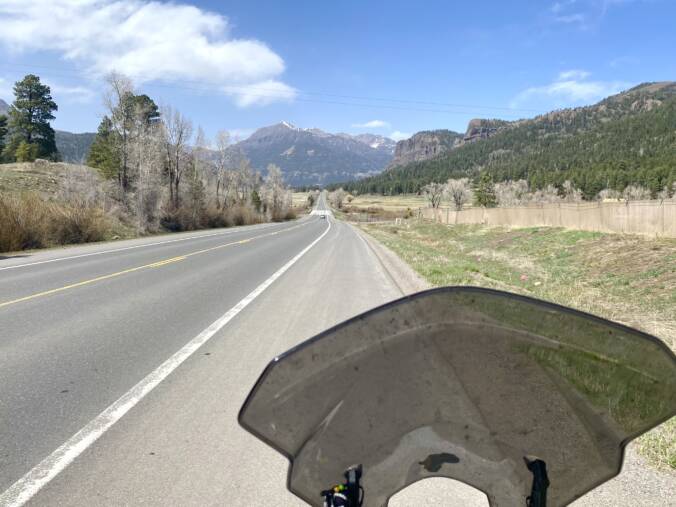 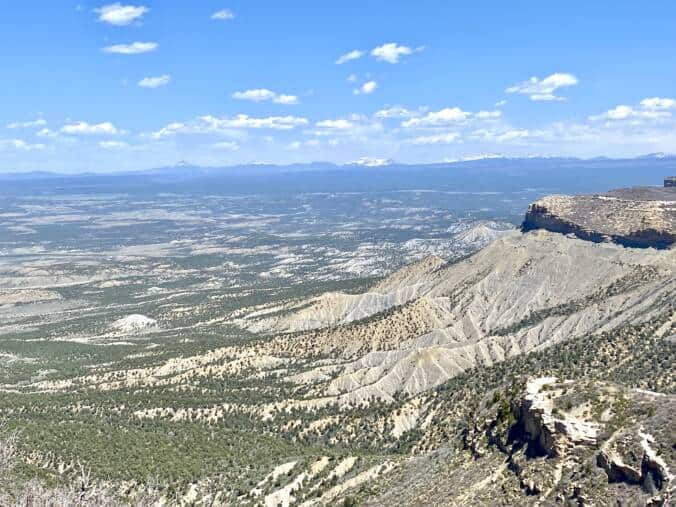 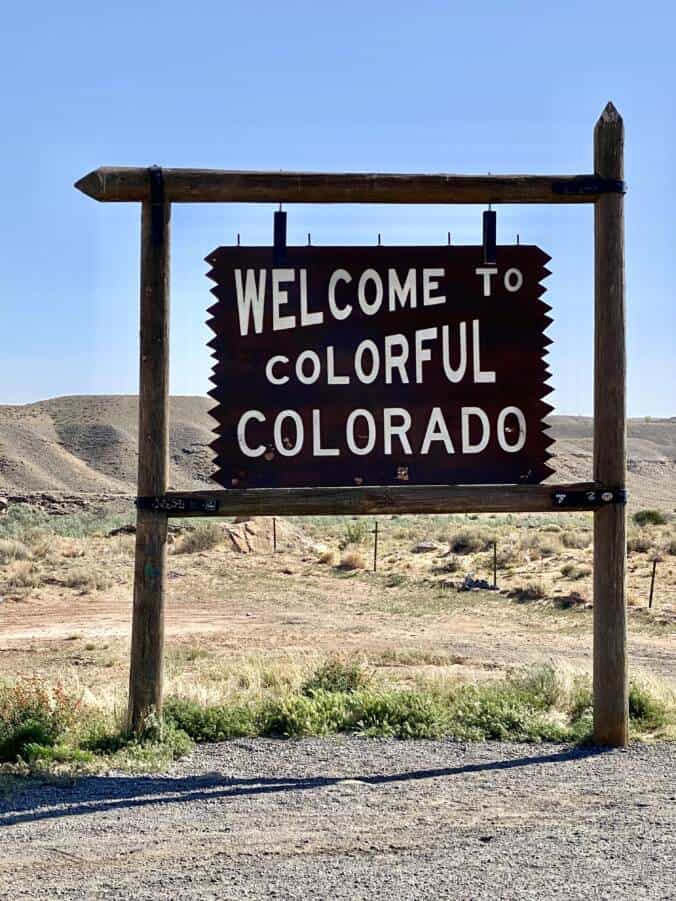 As far as the eye can see you can see snow-capped-mountains. The area surrounded by the mountains are farm-land, or Ranches, and its horse country with many places advertising their horse trails. I also suspect this is where all the free-range meat comes from as all the farms had black cattle grazing in the fields with many new-born calves being licked by their mothers, born just a little too early I suspect as the temperature never got over 15 degrees once we rode out of the desert and started climbing in altitude again. Going over the mountains was very cold as the snow had also not yet melted here. 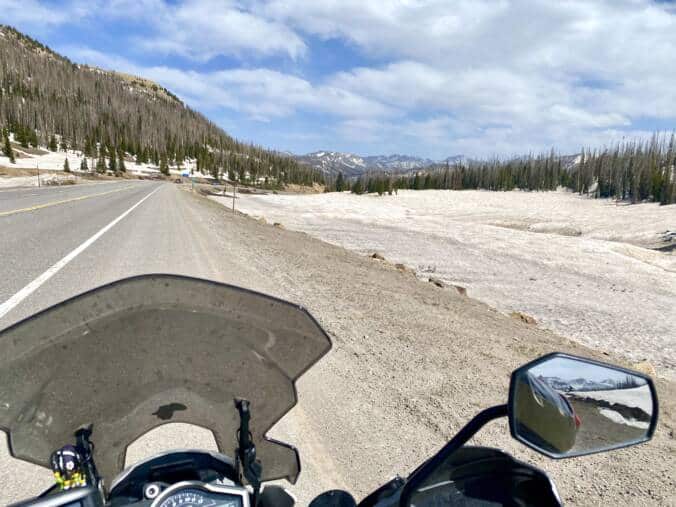 The main Tourist-Stop for today was at the : 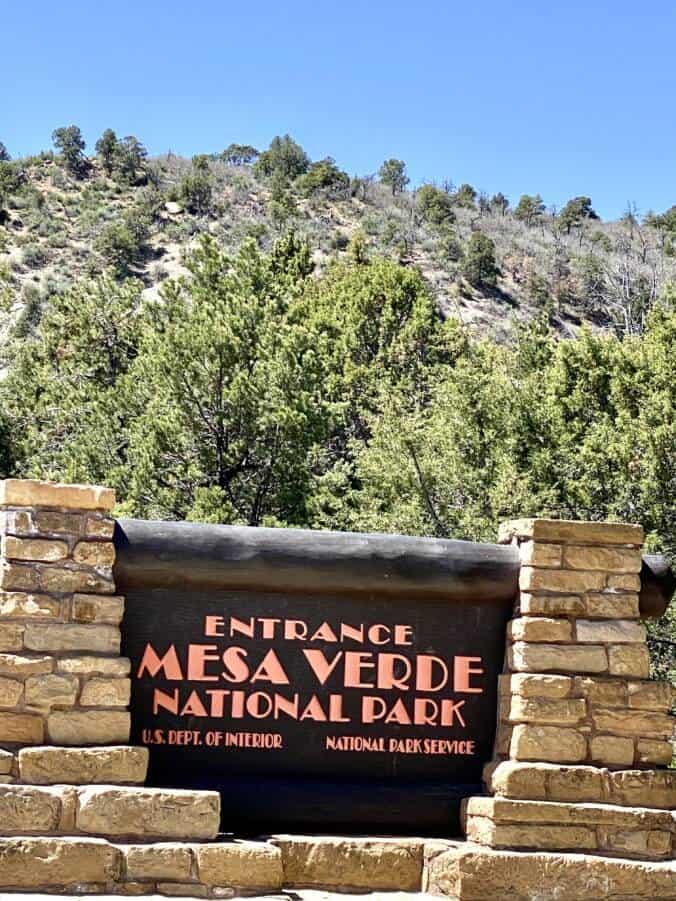 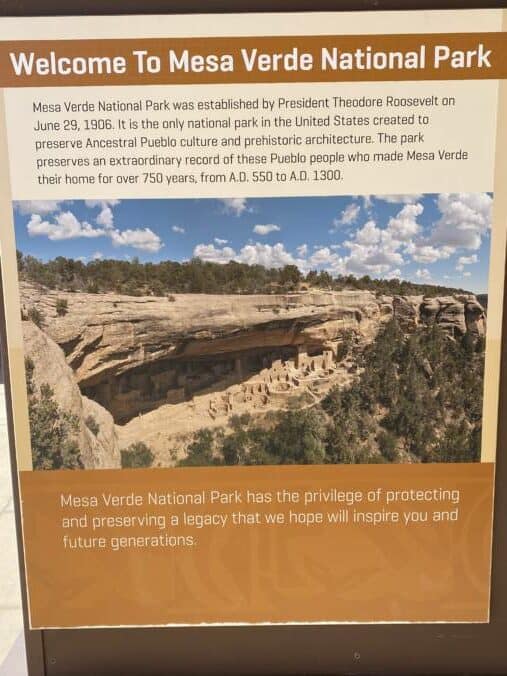 The Pueblo people stayed here on the mountain, at 3300m above sea level for about 750 years from before the birth of Christ and they were far ahead of most civilizations that came thousands and thousands of years after them. They farmed corn and squash and beans, they even built dams and lived in Pit Houses at 1st but then later started building houses above the ground, or Cliff-Dwellers as they built their “houses under large rock overhangs. They were potters and hunted with Bow and Arrow , and all of this very long before the rest of the world reached this advanced stage. 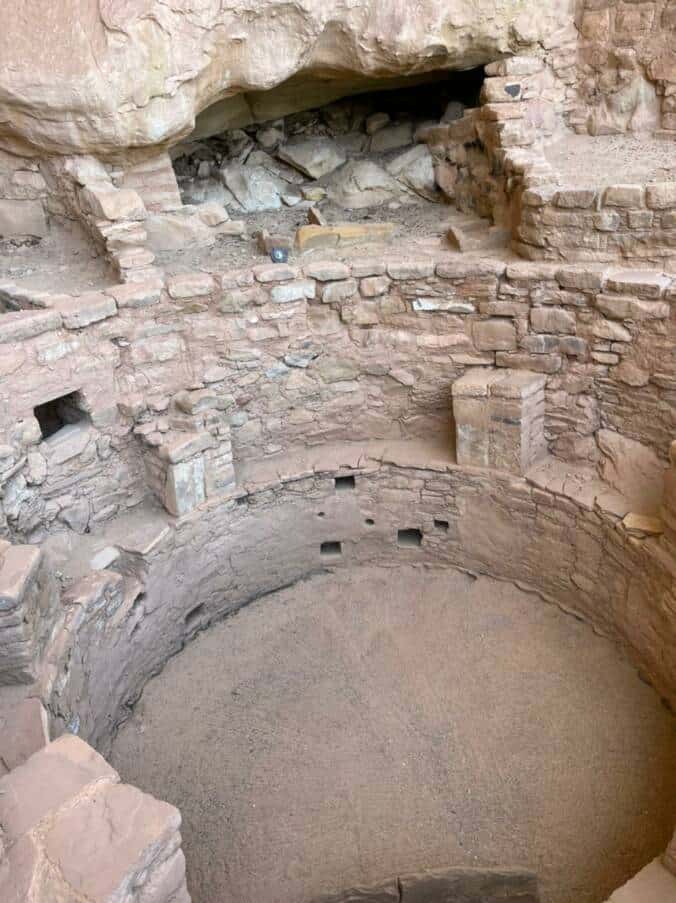 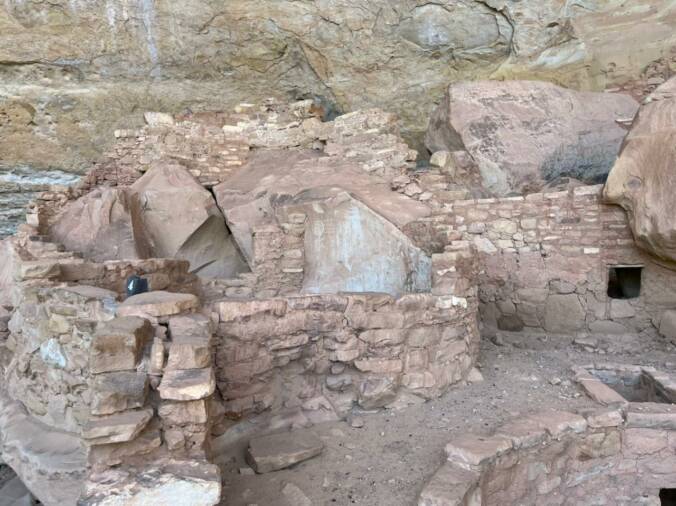 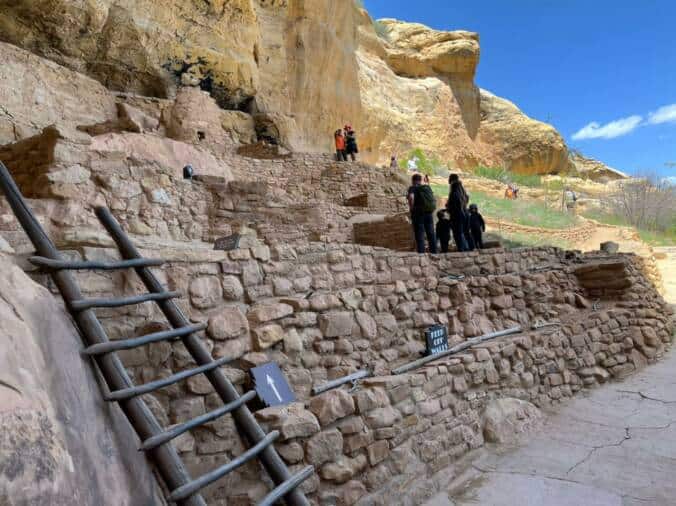 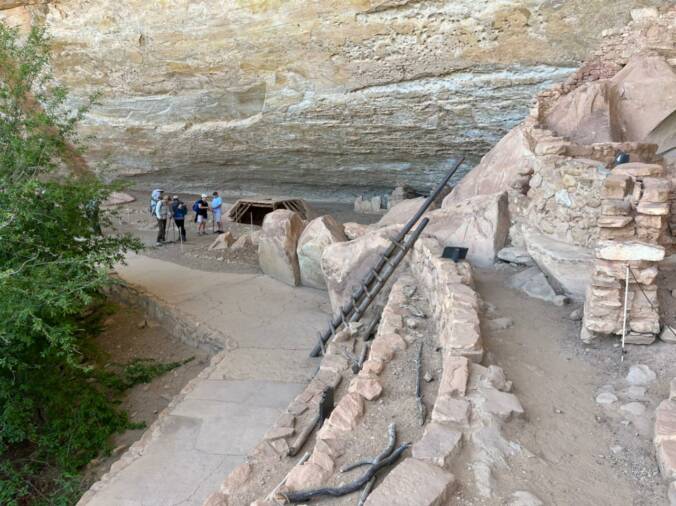 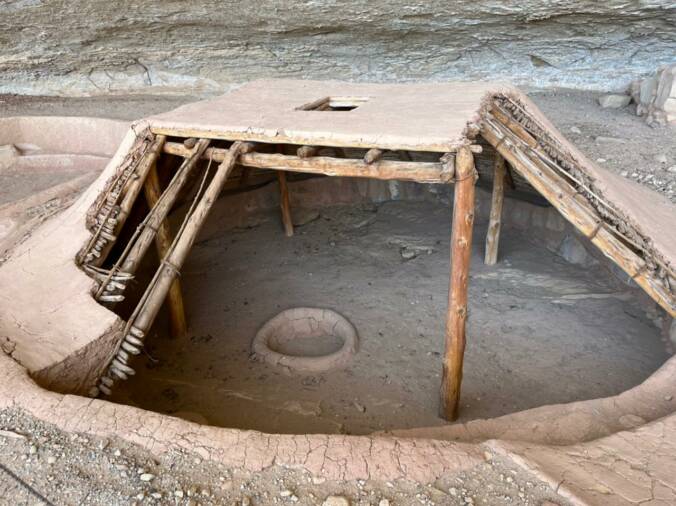 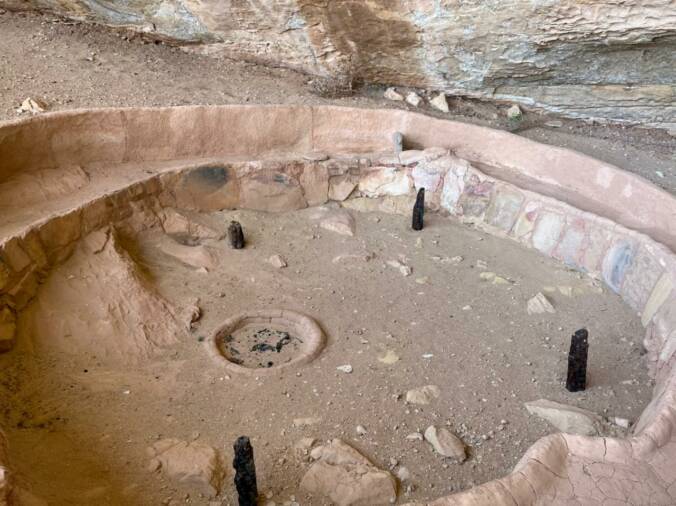 The state of Colorado has so many State Troopers patrolling the roads, I saw 4 cars today. Yesterday Pie, Tex and I came around a fast bend and there was a state trooper in his car, he probably tried to get a Radar Speed Reading but because we were three bikes in a tights-bunch he must have failed, I saw him switch on his red and blue lights as soon as another car passed him and he made his U-Turn, but then he switched them off and stayed behind the car which was also now traveling the correct speed. I continued holding to the speed limit of 65 Miles per hour and suspect he was waiting for me to speed up and then he would overtake the car and get my speed with his radar, but I continued and then Tex stopped for a photo and I stopped and he came past without any further incident.

But I was feeling worst and missing my wife as she would have doctored me with some muti and I would have already been fit as a fiddle by now. As it was a Sunday no pharmacies were open, but as we passed through Durango I saw a Walmart and pulled over. I was overwhelmed by the selection of medicine I had never heard of. All I wanted was to buy Sinus Clear or Sudafed, but nothing looked familiar. And then I wanted to pay, but no, one scan your own stuff that you have in your trolley and there is no “policeman” watching you doing it. It was a learning curve to operate the scanner and pay with cash and get change, but you are never too old to learn. 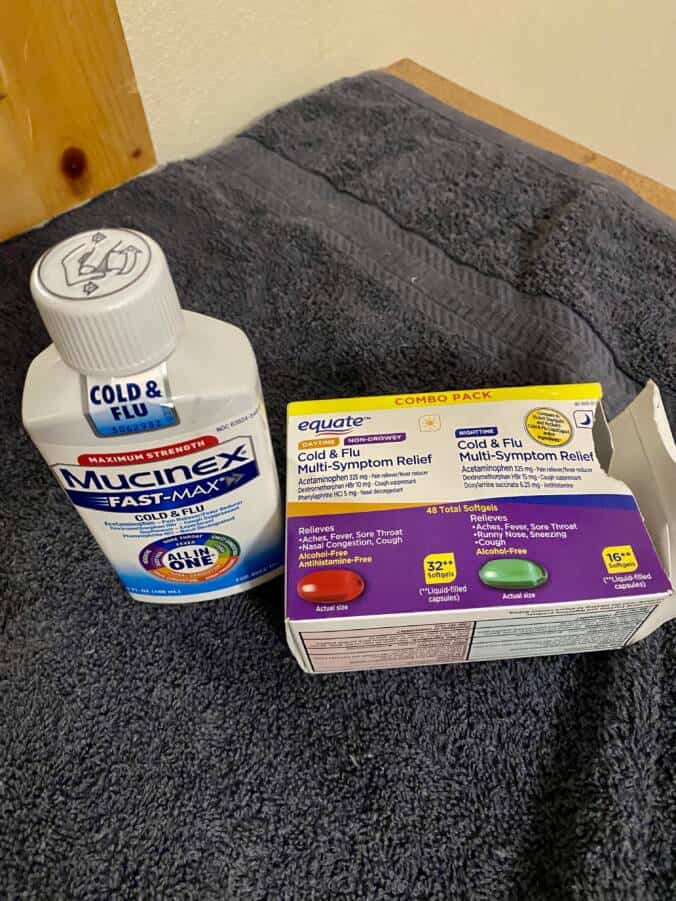 The tablets are red and green and one use the red during the day and it does not make you drowsy and then you hit the green when you go to bed.

This is where you scan and pay without any security watching you doing it. I guess there must be a security camera watching as it must be very tempting to “forget to scan” the new cellphone you bought. 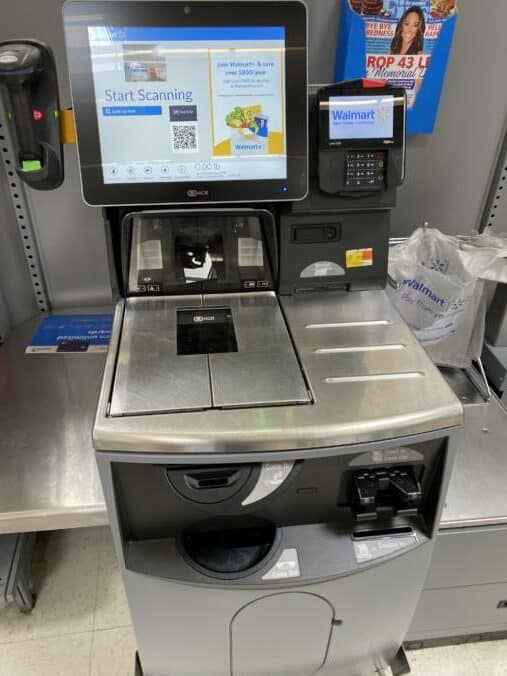 Yes, tonight is an all time record in Oros Prices and Standard. 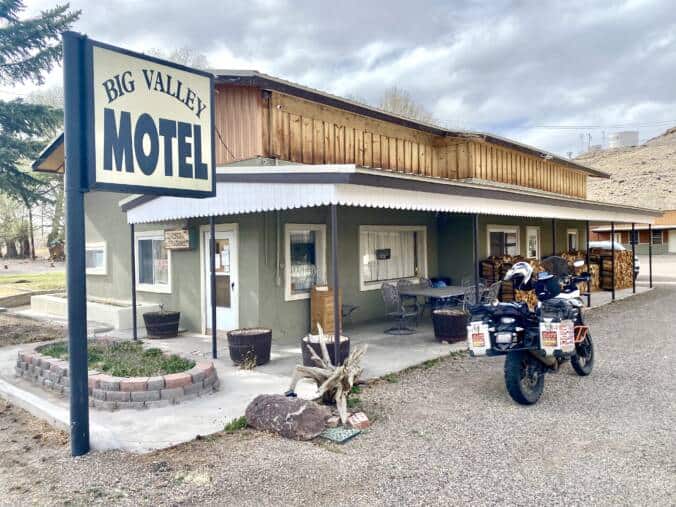 Note the Heater against the wall: 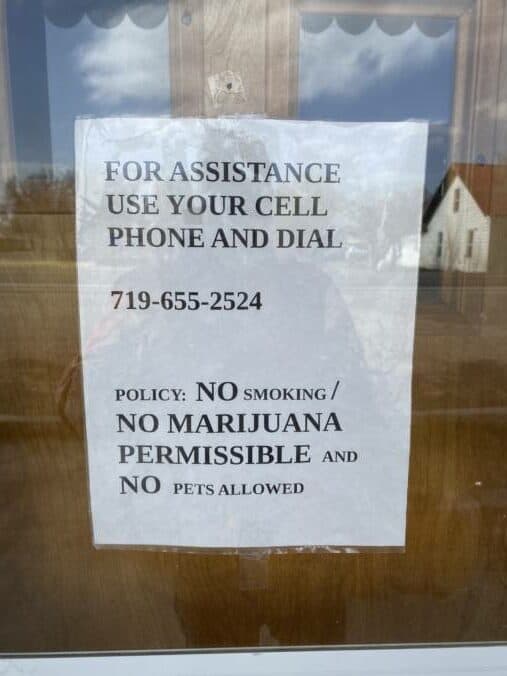 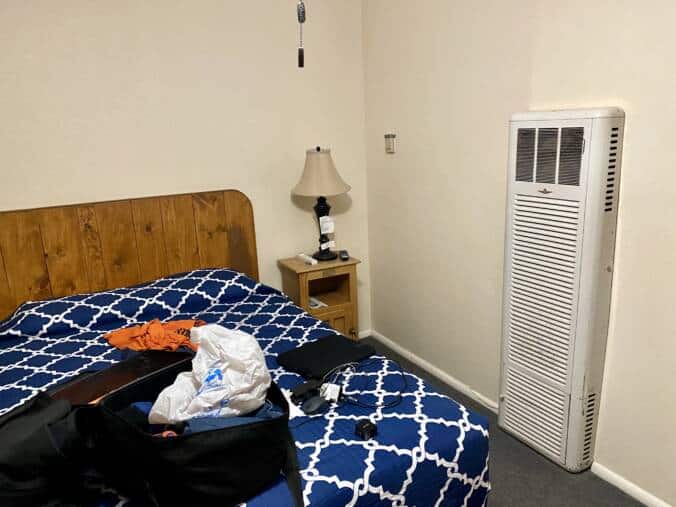 The damage of yesterday’s soft sand is evident for the trained eye, who knew that Mr. Mac Giver was riding with  us: 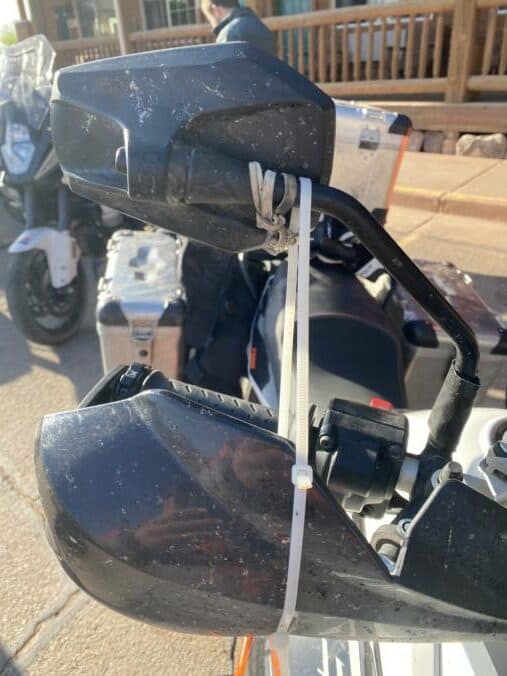 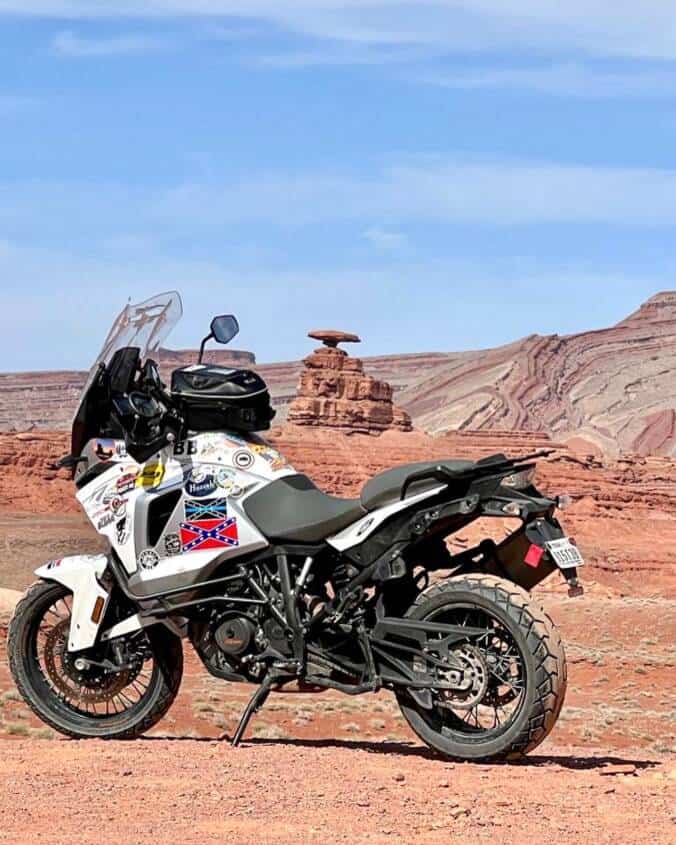 Yesterday was really tuff, and I forgot to say that we also lost an hour as we have been traveling East since we left San Francisco, so yesterday we had to turn our watches back 1 hour, so a long day with one less hour saw as scrambling to make it to the restaurant before the kitchen closed. I made a fatal mistake to choose the Smoked Brisket which they smothered with sweet spicy sauce, which, when mixed in with Garage Pie and a glass of red-wine resulted into a spectacular fire in my stomach.

Tomorrow we head into Denver the final destination for this Leg, find the Storage Unit, meet the guys from KTM and then all go to the hotel for one last night together. But the trip is not over for me yet, my flight only leaves  on Friday (thanks to Delta Airlines changes to their flight schedules.) Dog is riding off into the Sun-set with his girlfriend who rode up from Houston to meet him as the two love-birds has a romantic road trip planned going back by road. Tex fly out tomorrow late afternoon as he  has a meeting he cant miss, Pie flies away to Italy for a wedding on Wednesday, Misly has his daughter flying in Tomorrow as they are going Horse Riding and then Misly fly home on Thursday. Danny Boy has a female Bean Counter flying in tomorrow as she will be joining him on his little Tour de USA and Peens and Rocky flies out on Thursday. But you can all relax, your ride with me is not over yet, please join me for a 300km ride North to visit the biggest Private Toyota Land Cruiser Collection in the world. And no doubt there will be stuffs happening to me along the way there, the night I sleep there and the next day back.