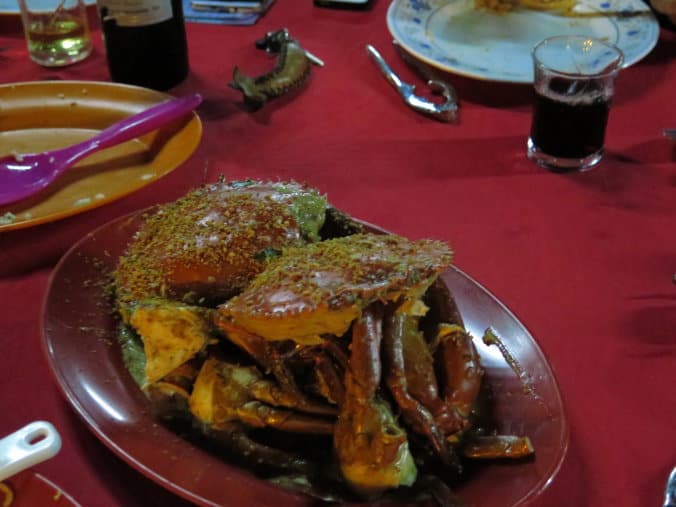 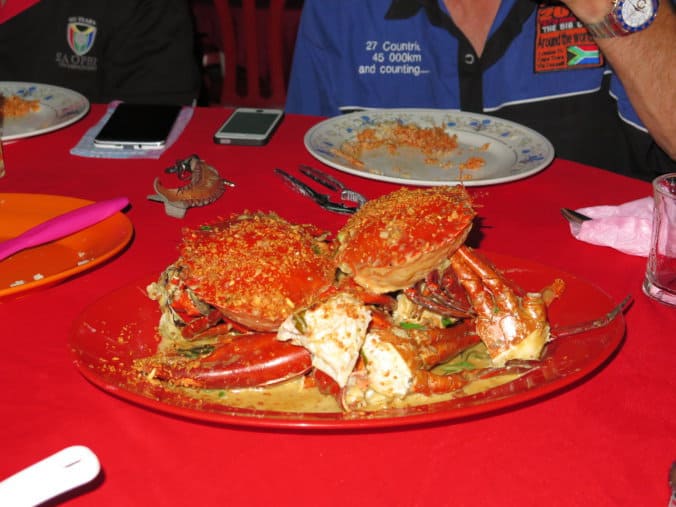 Today we jumped onto the Toll road and headed to the Shipper. At the beginning things went wrong. We lost the Land Cruiser, luckily the GPS in the vehicle was set with the co-ordinates for the shipper and he could get their on his own, but we got a little worried when we waited for Hennie at the on-ramp our GPS chose to get onto the hi-way, but Pie and Tex were jumping up and down as they had seen an earlier road sign point to another on-ramp to the one our GPS’s had chosen, so they were not happy.

Peens, Rocky and I travel by GPS for navigation and the two American bikes are navigated by road signs as their owners refuse to switch on their GPS’s and would rather test themselves daily to see if they can reach the next destination with only using road signs, making route notes of different rout names to turn onto taken from the map the night before (as a result they often took the “more scenic” route and on occasions had to be chased down and told to turn around.)

But when the navigation gets tough, like finding a hotel or trying to find an address or like today, to find the shipper that is in an industrial area, they very quickly tuck-in behind Peens or I, (like a little Venter-Trailer they stay right on your back-wheel all the way.)

We took the Toll-road and I was once again impressed how they dont allow motorbikes to pay toll, there is always a slip-road or by-pass for the bikes. Sometimes these little roads run past the toilets and offices and one is taken on a long detour before being re-routed onto the highway, and when we did have to pay toll to ride over a very large bridge, these little roads even had small little toll-booths with small little boom, and in the city these bike-paths has little road signs and one also pass through little tunnels and over little bridges, almost like riding in a miniature town. 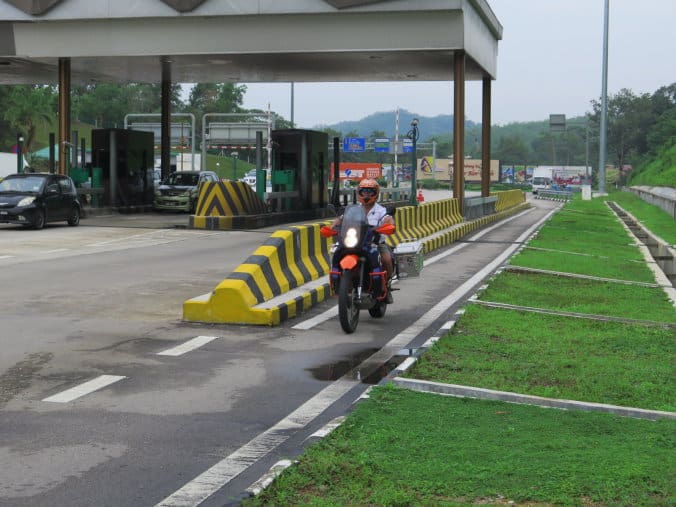 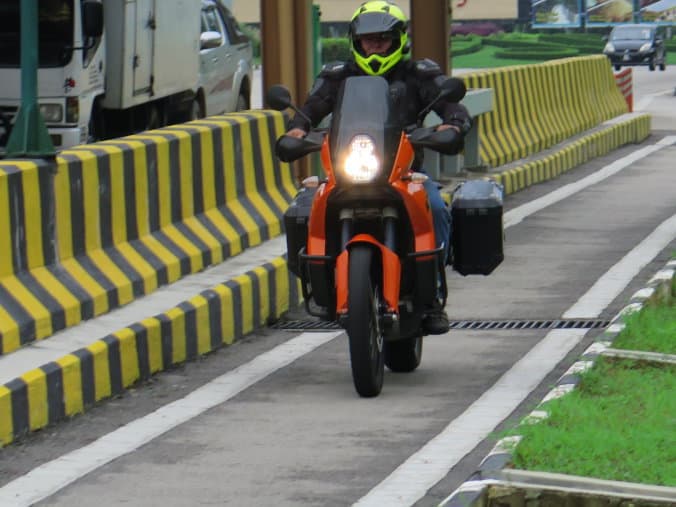 We all met-up at the shippers office only to hear that the shipping could not be finalised due to our little problem with our paperwork and that they had appointed an agent to deal with the Department of Transport who first had to cancel the incorrect paperwork and then issue the correct temporary import permits, and then only can they proceed with the finalisation of the shipping. So another day seems to be wasted and it now looks as if we will either be able to load the two containers ourselves and tie everything down ourselves (learn our lesson from the last time when we were told by Crown Shipping in RSA that we could not load and strap everything down and that they would do it, resulting in the Land Cruiser breaking lose from the poor-quality tie-downs and hammering the bikes in rough seas when we shipped to London,) tomorrow morning, or, simply drop the vehicles off inside a Bonded-warehouse of the Customs department. But we still need to fly to Singapore to connect with our flights out on Saturday morning, we are cutting it fine.

But a meeting between the shippers, one of us and the “contact” was scheduled for 14h00, so we decided to find a new office to make our base until we knew in which direction our lives will be going.

I am writing this Blogg from my “new office” at the little restaurant around the corner from the shippers. We are sharing a table with truck drivers who are very inquisitive about or trip and is asking so many questions. We have eaten some curry as payment to take over one of the tables.

The packing and sorting has started, and the dustbin is filling up quickly with rubbish not worth shipping, eg. we discovered 20lt of Water in the bottom of the Cruiser we bought in China last year, and Tex has decided to “hang-up” his gloves who has now come to the end of its life after he started the trip with them brand-new, (note the modification to deal with this heat.) We are also very glad that Pie’s boots are going into retirement as they smell worse than they look, but similar to what my helmet is still smelling after my little “toxic-swim.” 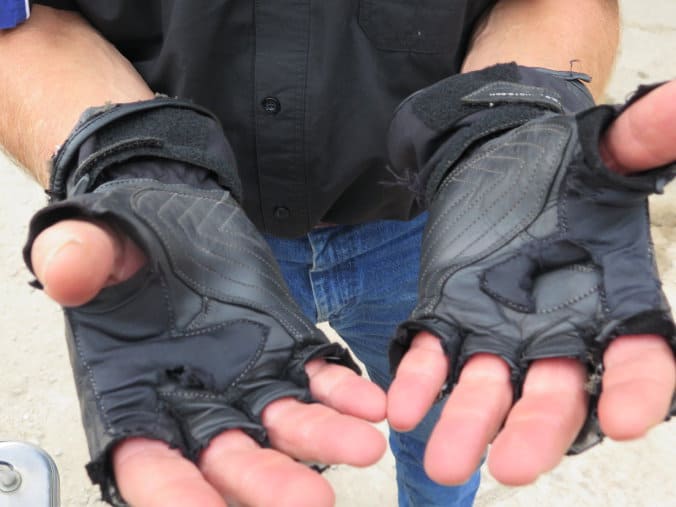 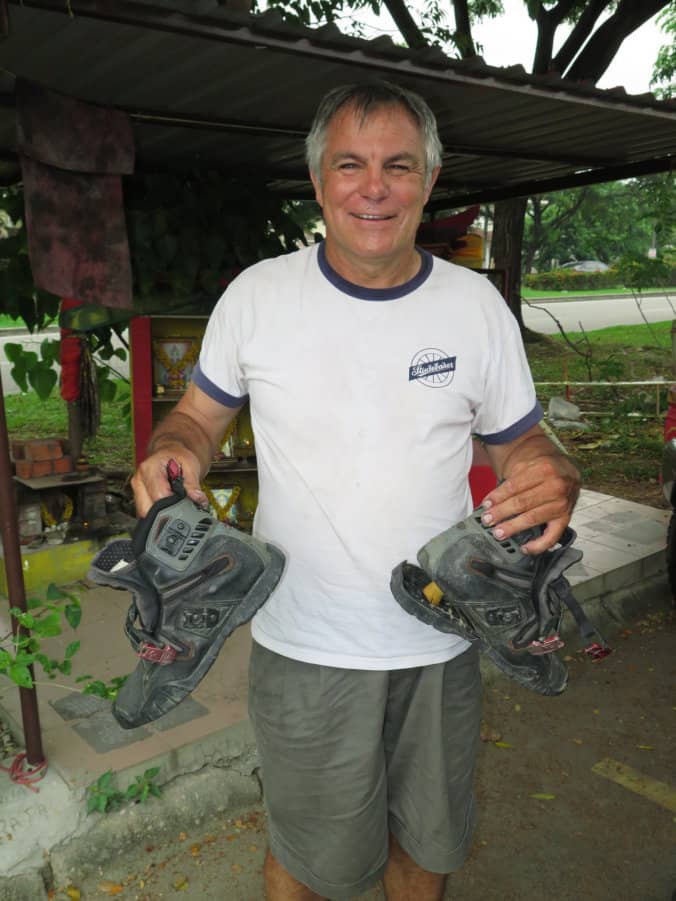 Peens was given a present by the English teacher in Laos (she taught English in a little classroom opposite our last storage and he often contacted her to hear if everything is still ok with our vehicles and had became good friends, so he arrived with presents for her and she then gave him a bird house for his bird. We tried to make this bird-house disappear but it was just too big to hide, and it is still in good shape considering how it had been abused in the back of the Cruiser on all the bad roads. Hope his bird is happy with its new sleeping quaters. 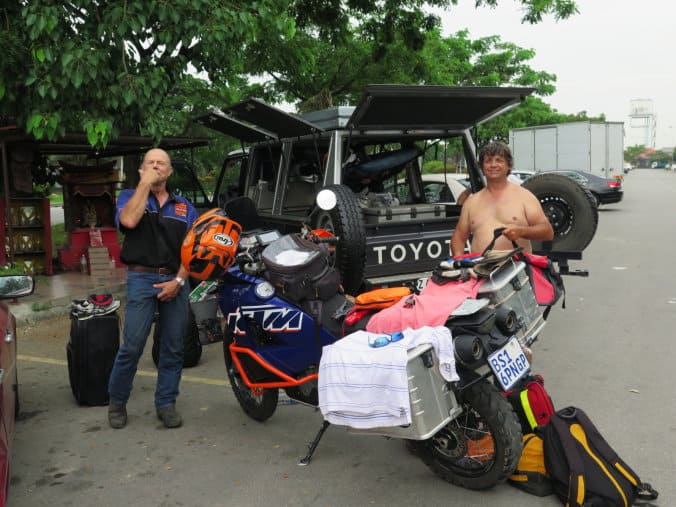 But then we ran out of things to do and started messing around. Peens and Hennie started a “business” waxing all the local’s scooters chains who stopped by our office to buy some food. Soon even the bicycles were waiting in line. 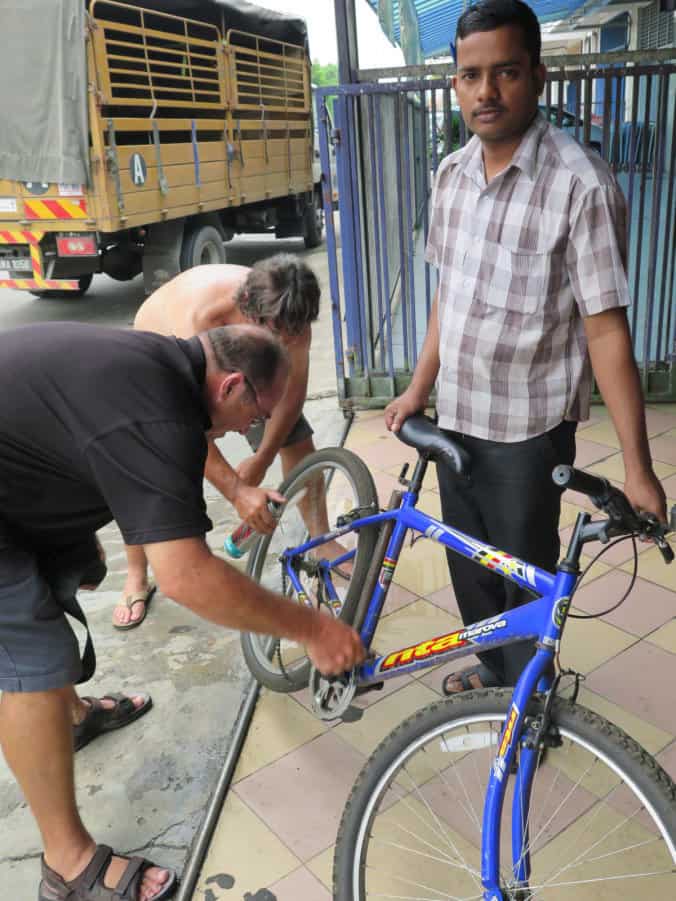 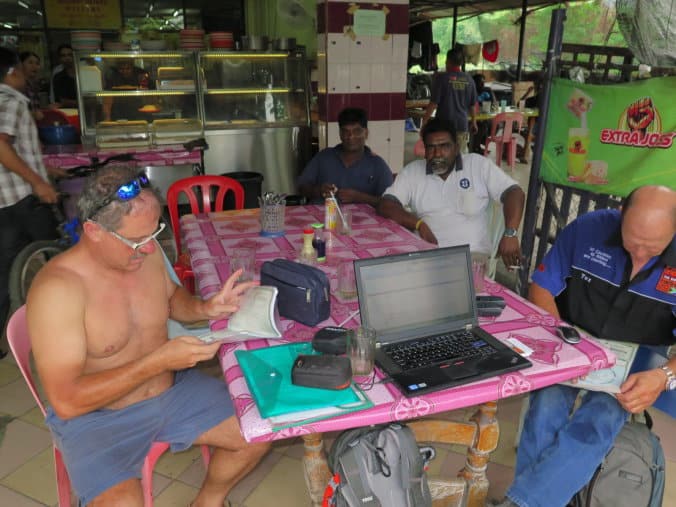 Then the lady that owned the restaurant befriended us and then little gifts were handed over and then there was a photo session.

Then we ran out of things to keep us busy, we had already told Tex he made a mistake when having these stickers printed as he forgot to add Bulgaria, and we felt he should not have included Azerbaijan as a country, although we were there (we walked up to the border when in Georgia and were visiting those Monasteries and stuck our feet over the border,) the bikes was also there, but on the back of a trailer in the middle of winter when we had to move the bikes out and back into Georgia to extend our Import permits, so technically we and the bikes were there but as we never rode on the bikes in that country we decided it can not count. 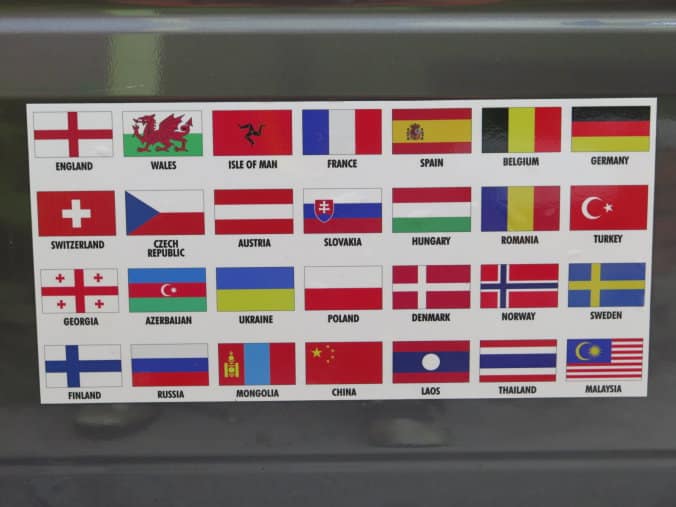 Then we split-up, Tex was off to the meeting, Pie went to the local laundromat as his clothes which got wet had started turning into mushrooms and he needed clean clothes to fly back in (the kitty paid as it was in the interest of all of us to have our friend smelling a little better.) And the rest of us took off into Kuala Lumpur. How things have changed in 20 years since my last visit. The city center proudly shows off its famous Personas Towers and the KL Tower is not far from it, (a tower similar to the Red Tower in Shanghai (cant remember its proper name now.) It has an impressive sky-line with modern and impressive architecture.

We eventually all re-grouped at the Oros Hotel. My luck also changed as they overbooked the hotel and I was up-graded to the honeymoon suite. Tonight we are going out on the town to celebrate the fact that non of us has killed one of the others, that we were able to push-though in the tough times, and made this journey such an epic trip, two continents with some very difficult countries to pass-though was no joke, but we made it, stuck together and are now almost at the finishing line for Europe and Asia.